The Dartmouth base was a huge operation in 1984, with many ships calling it home, with the Charlottetown and Saint John ships occasional visitors. Not only that but fisheries protection had a separate fleet based in Halifax and the hydrographic and oceanographic services ran independently, based at Bedford Institute of Oceanography.

Among the other vessels based in Dartmouth, not mentioned before were: 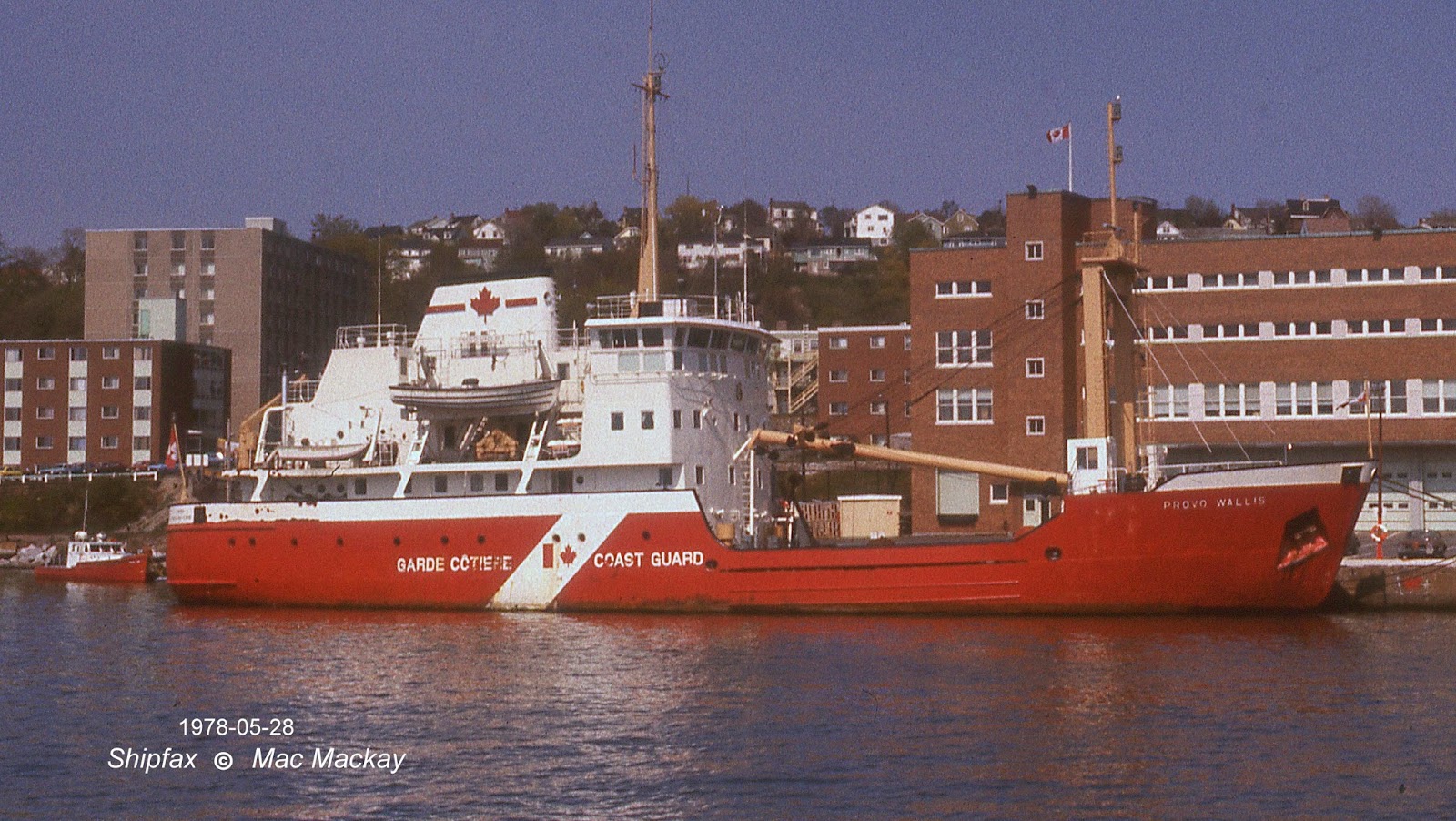 CCGS Provo Wallis has been mentioned in these pages numerous times, especially as to its farcical sales process, which was finally completed in 2013. Built in 1969 by Marine Industries Ltd in Sorel, it was an ice strengthened buoy tender. Originally based in Saint John, when that base was reduced it came to Halifax.
In 1990 it was lengthened about 20 ft to 209 feet by Marystown Shipyard. It was laid up in 2003 but refitted in 2006 and transferred to the west coast. Refitted again in 2009 it was retired in 2011, renamed 2011-02.
In January 2012 a sale for $406,000 fell through, and over the next eleven months the price kept going down until it bottomed out at $75,000, and was sold on the bid of a Campbell River buyer. 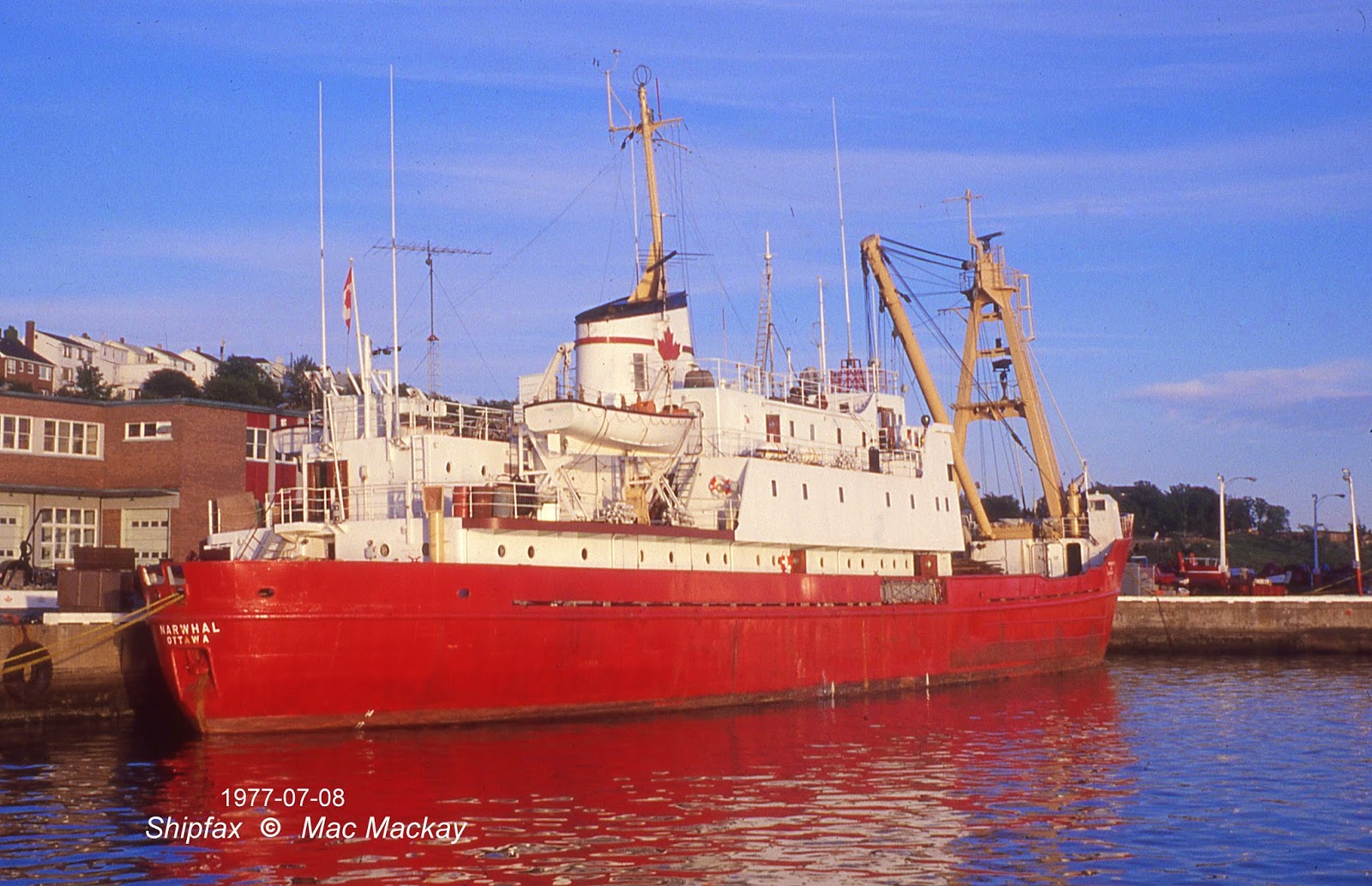 CCGS Narwhal was a unique ship in the Coast Guard fleet. Built by Canadian Vickers in Montreal in 1963 it was classed as a depot ship, which would accompany the annual northern supply missions. It housed stevedores and carried gear to assist in unloading cargo at remote ports. When not deployed to the north it was a navigation aids vessel.
When northern supply was privatized, Narwhal went to buoy tending full time, and was transferred to the west coast. It returned east in 1982 and was based at Dartmouth.
In 1984 it went to Halifax Shipyard for a mid-life refit, including re-engining, and the addition of a helicopter platform. 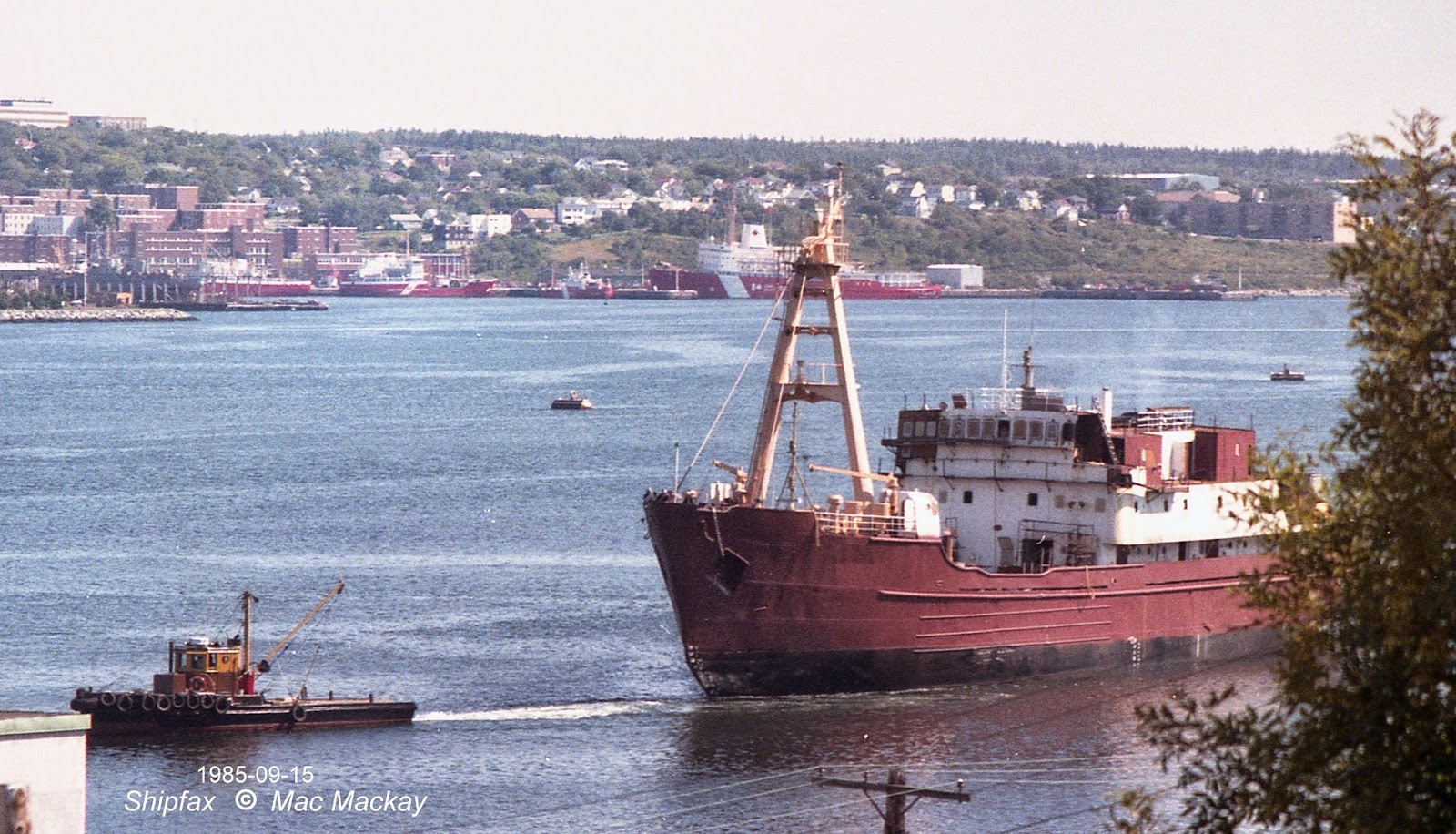 In the midst of its mid-life refit, Narwhal was a sorry sight. Halifax Shipyard's Slipway II moves the dead ship from the Graving Dock.

Unfortunately Halifax Shipyard went into receivership and the new owners in March 1986 announced that the ship would be a year late completing.  It was intended for the west coast again, but did not leave Halifax until November 4, 1991.
Five years short of its expected lifespan, it was retired in 1999 and renamed 1999-03.
In 2001 new owners, High Seas Adventurers (Tradepower International) of West Palm Beach FL, renamed the ship Bart Roberts (after the notorious pirate Black Bart) and refitted it to a specialty charter ship in the Caribbean. There was considerable hoopla about the project: http://www.powerandmotoryacht.com/megayachts/biggest-baddest
Classed as a yacht, it was deleted from commercial vessel registers in 2005, but has been spotted from time to time:
http://dieselduck.blogspot.ca/2013/07/west-coast-pirate-spotted-in-dubai.html#.VGASrGeEySo

SIR HUMPHREY GILBERT
Based in Newfoundland the small icebreaker CCGS Sir Humphrey Gilbert, was built in 1959 by Davie Shipbuilding in Lauzon, QC. It was a diesel electric version of the steamers Montcalm and Wolfe. It was also built with a helicopter platform and had a hangar added in a later refit.
It came to Halifax in 1984 for a mid-life refit that would radically transform the ship.
The ship received a new bow, had its bridge wings enclosed and received a new derrick mounted forward, 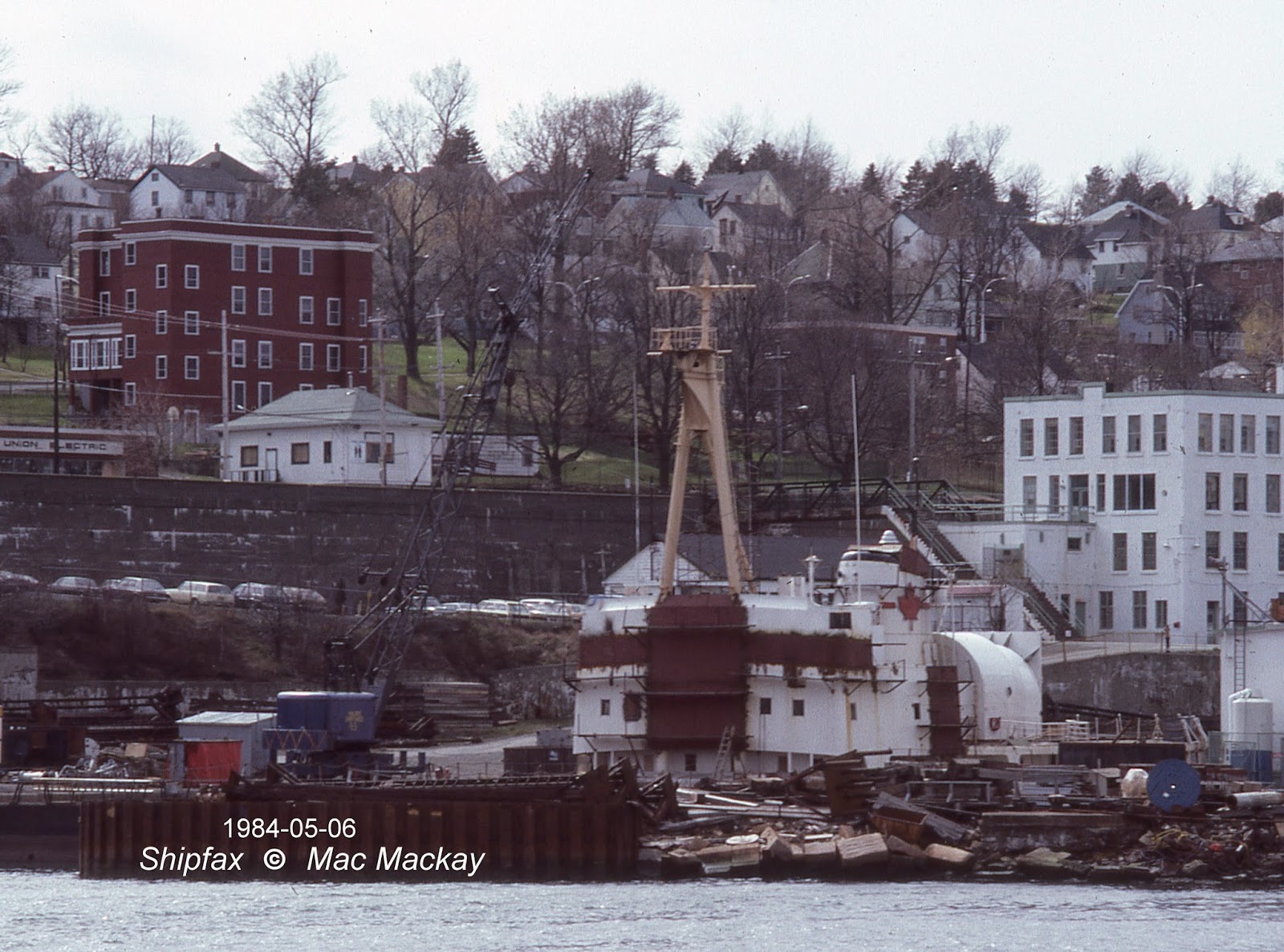 In the graving dock Sir Humphrey Gilbert has lost its bow, and its bridge plated in. The typical derrick control cabin below the bridge has also been removed. 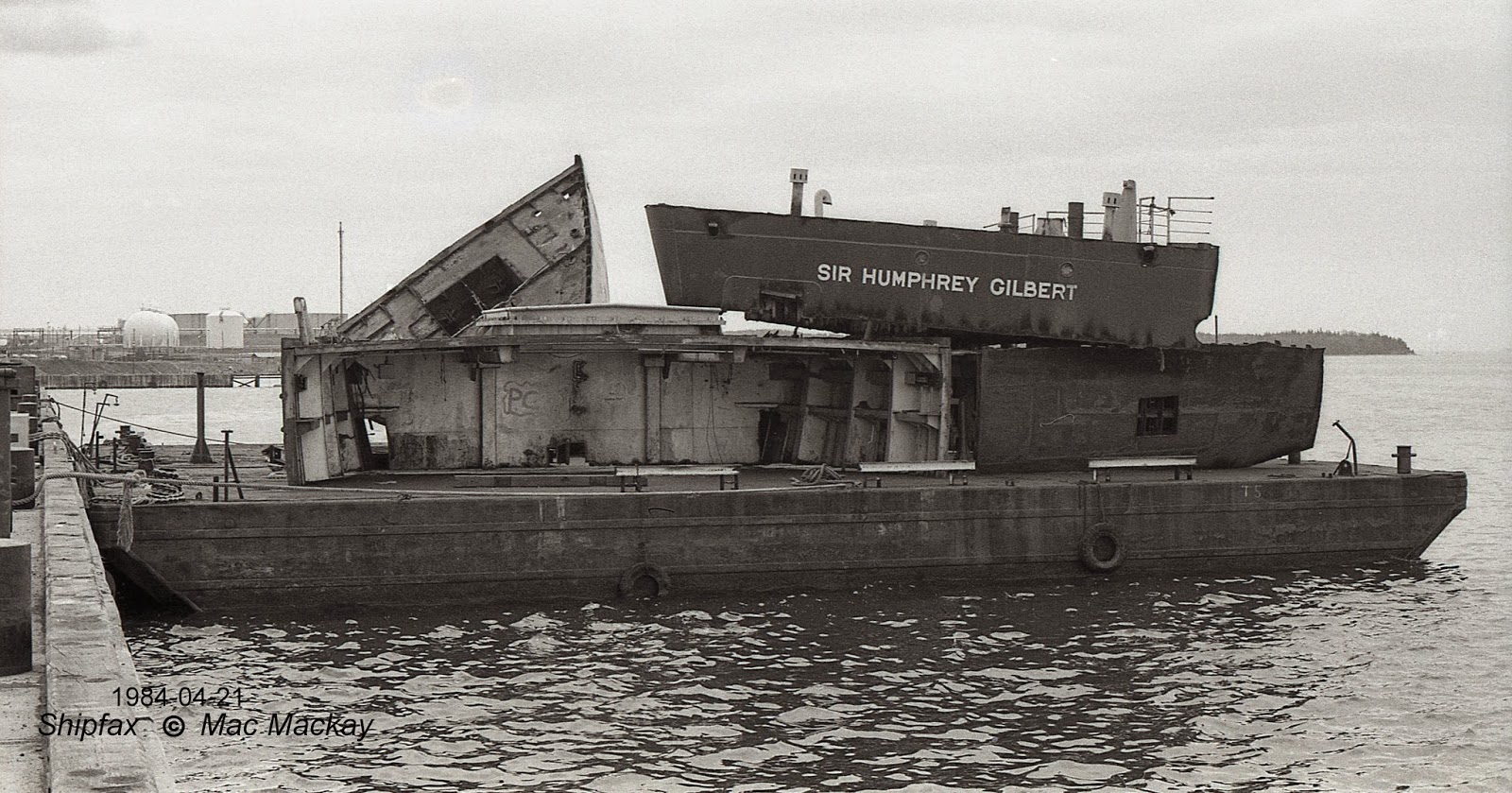 The old bow was barged to Dartmouth where it was cut up for scrap. 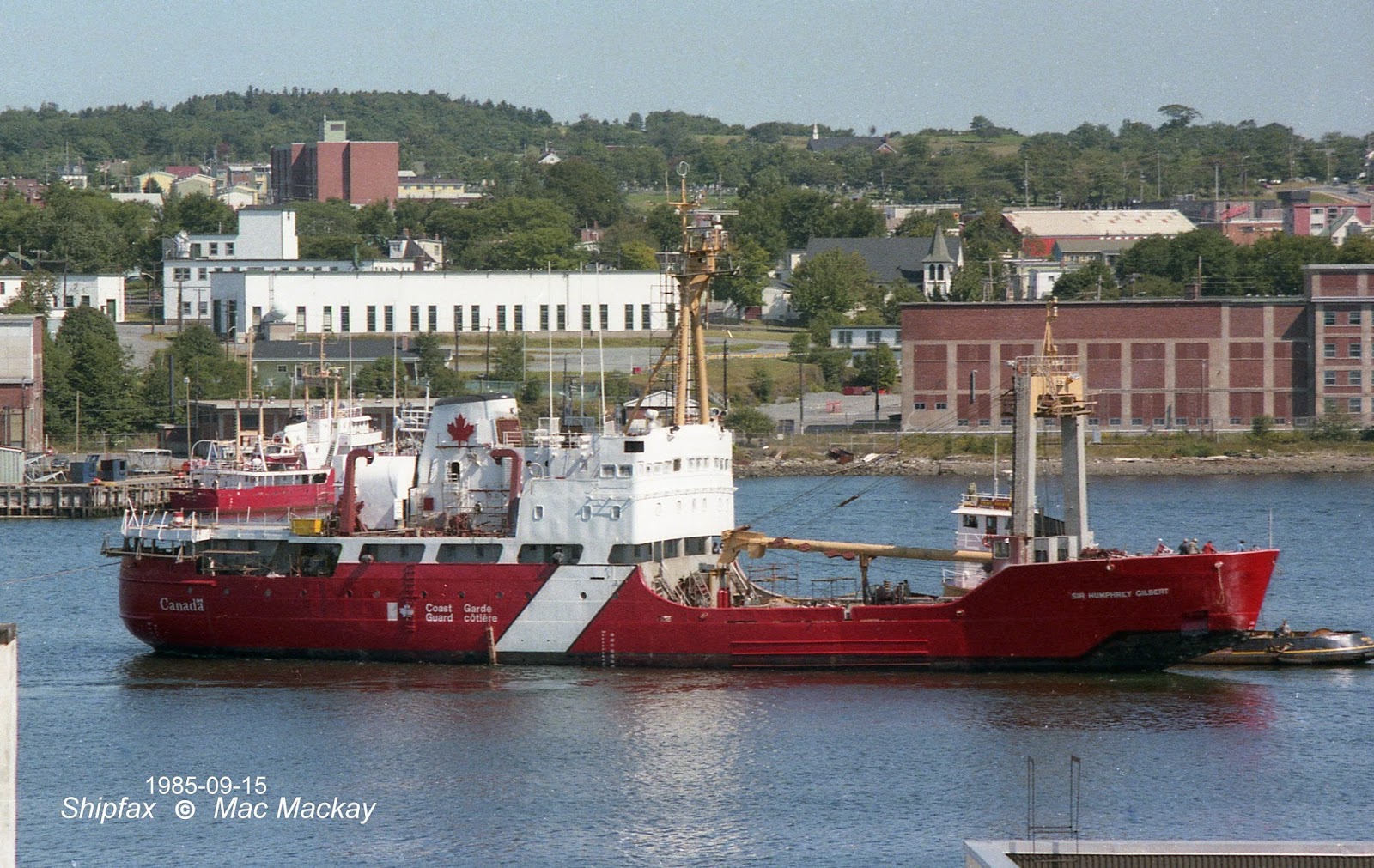 The ship returned to Newfoundland and lasted until 2001 when it was retired and renamed 2001-06. It sold the next year becoming Gilbert I, but was resold and renamed Polar Prince. As Canada's only privately owned icebreaker for commercial hire, it has been based in Lunenburg for the last year, and has now returned to that port after summer work in the north. 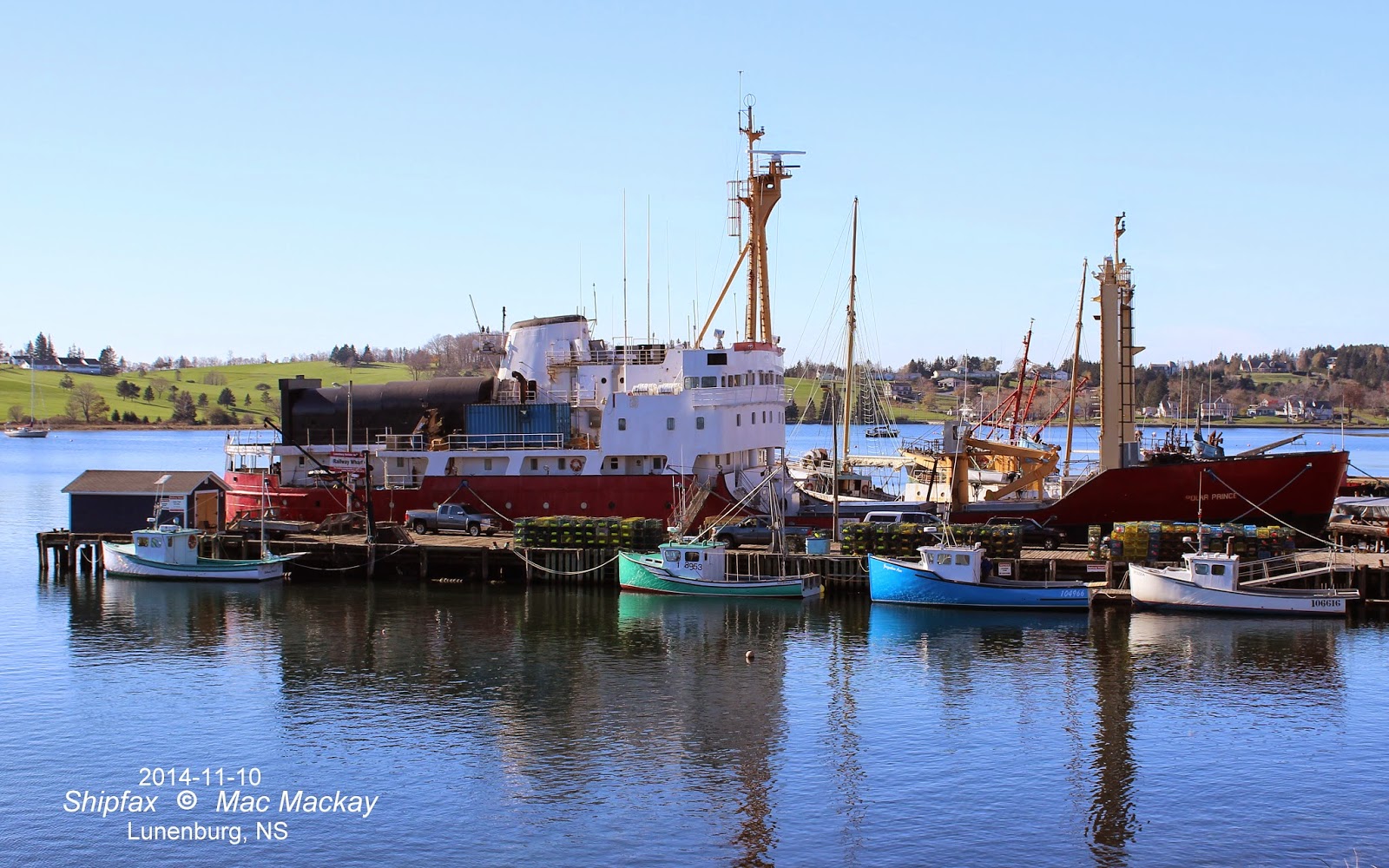 Dating from its launch October 22, 1957, the ship was built for the RCMP as the only example of its type, the Commissioner class patrol cutter RCMP Wood (MP17). Built by Davie Shipbuilding + Repair in Lauzon, QC, it arrived in Halifax for the first time July 28, 1958. It was intended for service in the north in summer and for police patrol in on the Atlantic coast in winter.
It arrived in Montreal April 24, 1967 as marine security command for Expo 67. It had seven small craft based with it.
In 1970 it was sent to Stenpro in Liverpool, NS to be refitted for Search + Rescue duty. On completion, and transfer to the Coast Guard it was renamed Daring and based at Sydney seasonally. 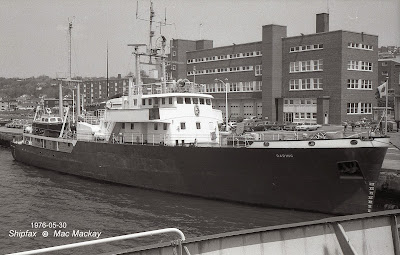 Although the white diagonal slash was added to CCG ships in 1975, Daring escaped it until a repainted in May 1976. Note the beautiful launch in davits aft. It was later replaced with a more robust craft. 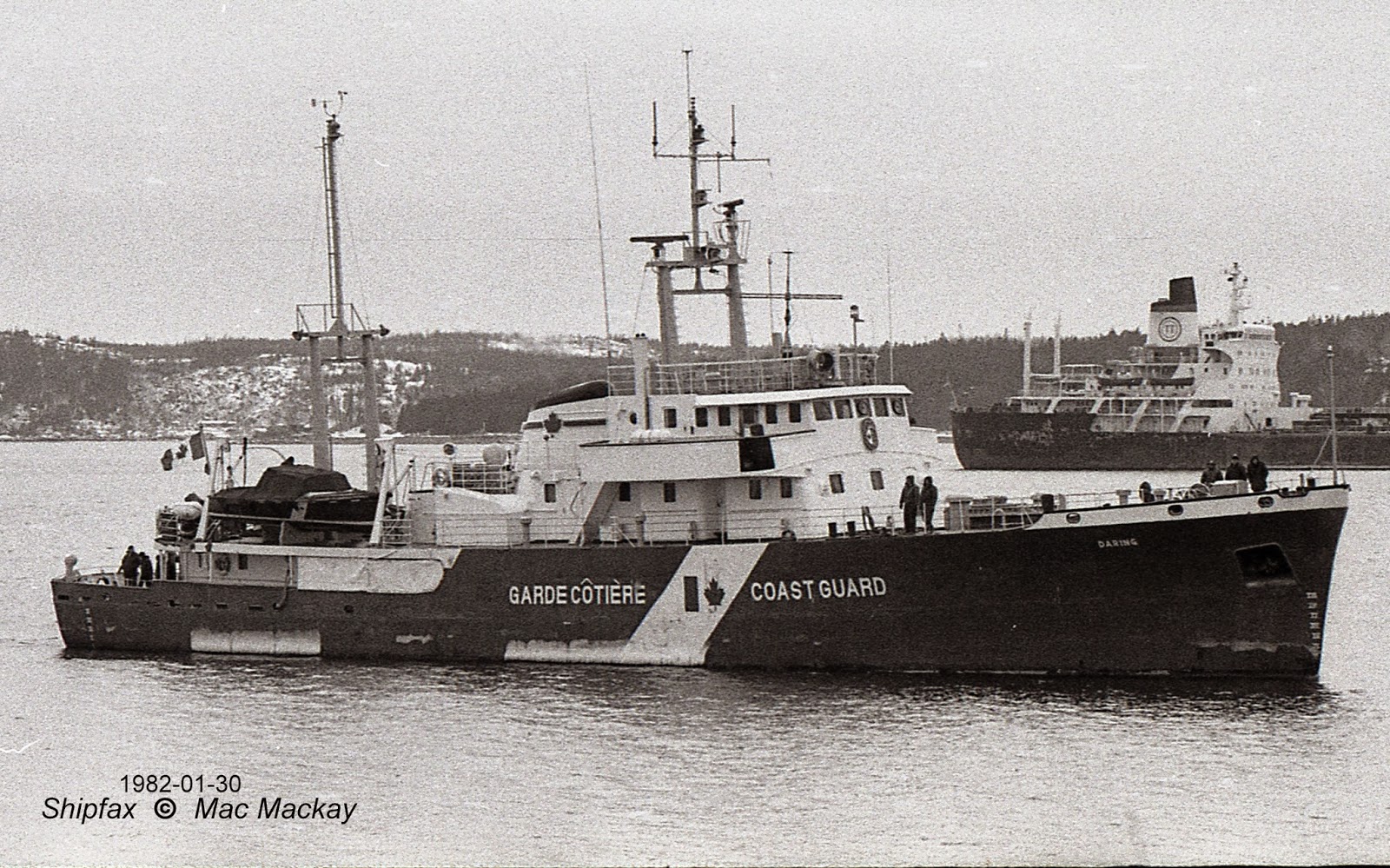 Daring arriving in Halifax January 1982 with the tanker Arhon in the background. It had been towed in by Irving Birch and Irving Maple after two weeks adrift off Sable Island in severe weather. Daring stood by in appalling conditions. The tanker was eventually towed to Spain by Irving Miami.

Daring was retired in 1985 when its replacement Mary Hichens was delivered. Mercifully Daring never received the garish yellow SAR paint scheme. (That colour scheme was dropped when the CCG was transferred from the Minster of Transport to the Department of Fisheries and Oceans in 1995).
Sold to Quebec interests, it was ironically seized in Belize for smuggling drugs in 1986. It was classed as a yacht at that time, and was likely abandoned or scrapped.

And last but certainly not least:

One of the finest ships ever built by Halifax Shipyards, it was launched December 13, 1959 and served with distinction until July of 1989. Its service was memorable enough that its replacement received the same name- as much in recognition of the man who had Nova Scotia as an idea, as for the ship itself. The ship was built to the proven pattern established by the Edward Cornwallis (i) as a light icebreaker buoy tender. 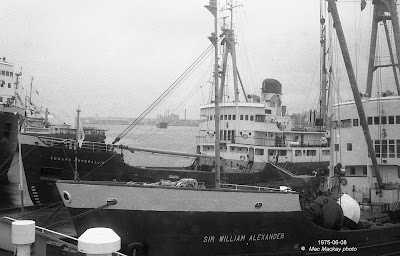 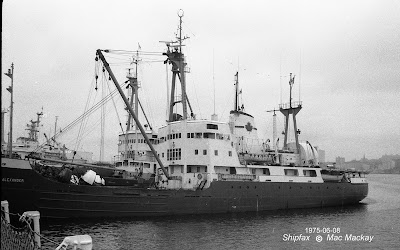 Longer and narrower, but to perform the same basic work, Sir William Alexander was the epitome of the Canadian Coast Guard light icebreaker and buoy tender. The winch control room below the bridge and derrick mounted to to the superstructure was dropped in subsequent ships. 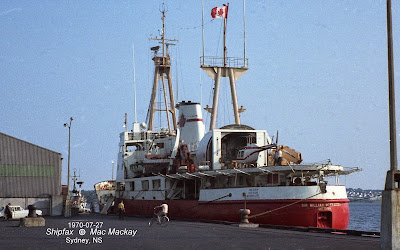 Built with a helicopter deck, the telescoping hangar was added later. In 1970 it was host to a Bell 206 A/B the standard CCG 'copter of the day.

The ship's most famous exploit was in rescuing the crew of the tanker Kurdistan in ice in the Cabot Strait in March 1979 when the tanker broke in two. Sir William Alexander assisted in escorting the ship to the Strait of Canso where it was pumped out and patched up for towing to a repair yard. 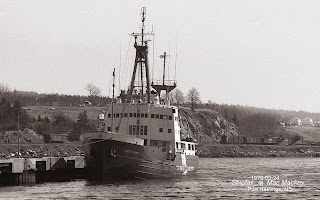 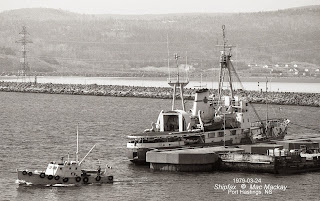 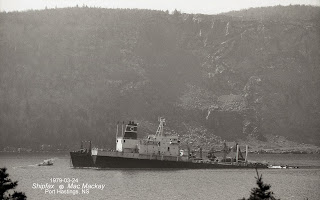 Sir William Alexander tied up at the eastern approach wall to the Canso Canal, standing by salvage operations. The DPW boat Maces Bay is ferrying people out to the Kurdistan, which is anchored beneath Cape Porcupine with a McAllister salvage barge alongside.


Renamed William in 1987 she was kept in service until July 1989 due to delivery problems with her namesake replacement. 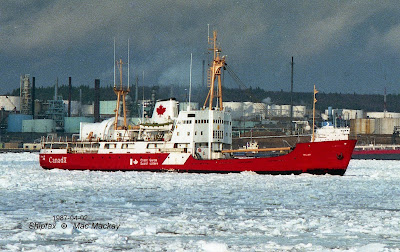 In April 1987 William had the rare responsibility of lifting navigation aids in Halifax harbour when flow ice from the Gulf of St.Lawrence blew in. It had to navigate in heavy ice, but was not required to break the ice, since it had already broken up on its way south. Note her bridge had been plated in during a previous refit.

When finally laid up she became H-22, in February 1990. After sale to Bahamian owners she languished in Halifax until 1992, then moved to Pointe-de-Chêne, NB for another year. Finally she became the Belize flag Pilar del Caribe. When drugs were found aboard in Kingston, Jamaica in 1995 authorities seized the ship. Before it could be sold for scrap it parted its lines and blew ashore. Beyond salvage it was left on the beach at Bull Bay where it became local landmark.