Tankers in waiting, a first timer and a no show, among other things

There is nothing new about tankers in waiting in Halifax. It seems to be the rule now that product tankers arrive, wait their time at Imperial Oil and sail - most never to be seen here again. Except there is a minor twist on today's list. 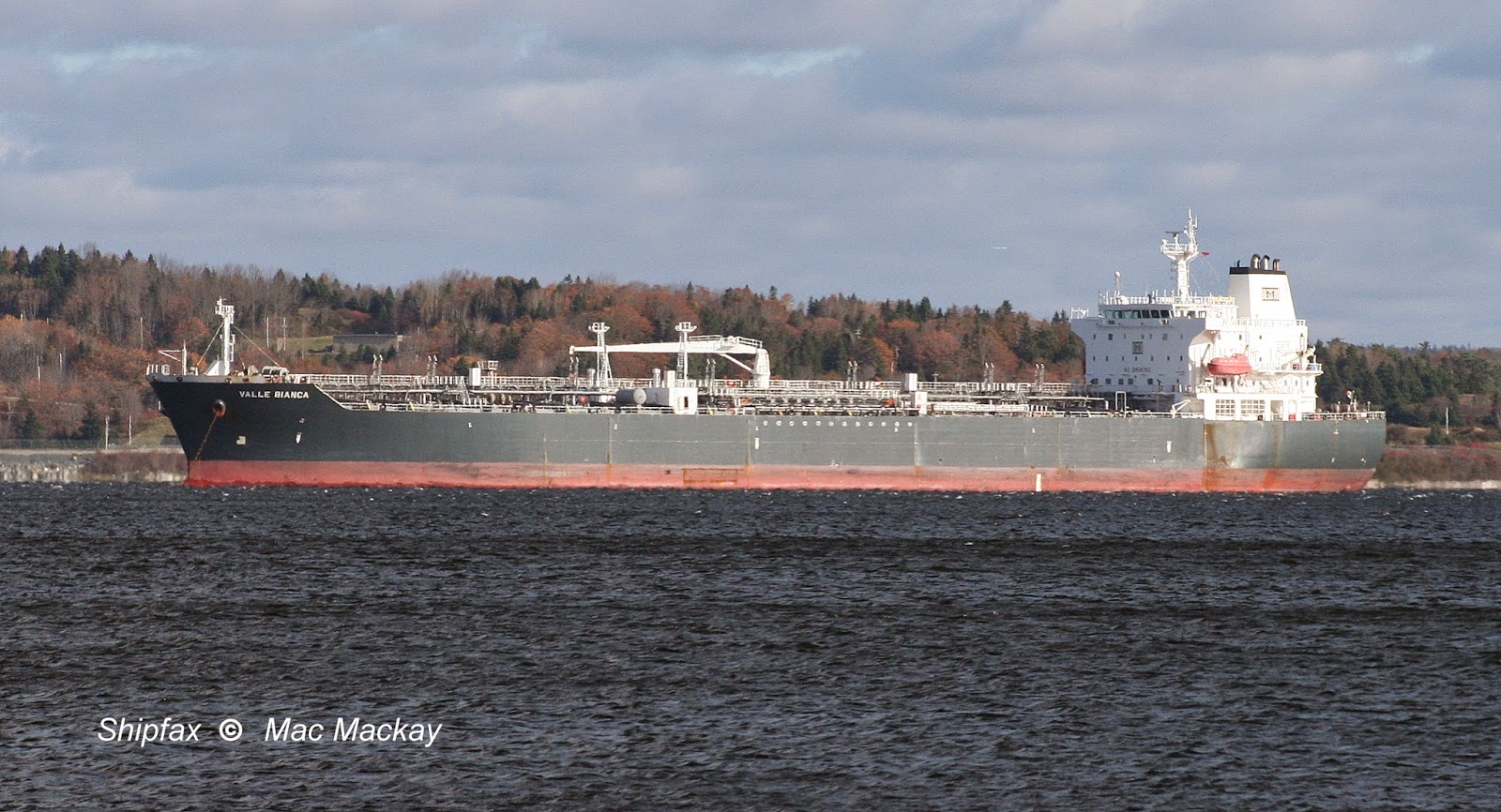 Valle Bianca tugs at its anchor line in a stiff breeze in Bedford Basin.

Valle Bianca, Italian owned and flagged, predictably built in South Korea in 2007, measures 29,996 grt, 50,633 dwt. Builders are listed as SPP Shipbuilding Co, Tongyeong - a new one on me. It is anchored in Bedford Basin until Esso is ready for it.

East Coast, also Korean built, has been flying the Canadian flag since October 6, when Irving Oil needed another ship for domestic work. It is on long term charter from Vroon and previously flew the Marshal Islands flag as Nor'Easter. http://shipfax.blogspot.ca/2014/10/noreaster-blows-in-to-east-coast.html 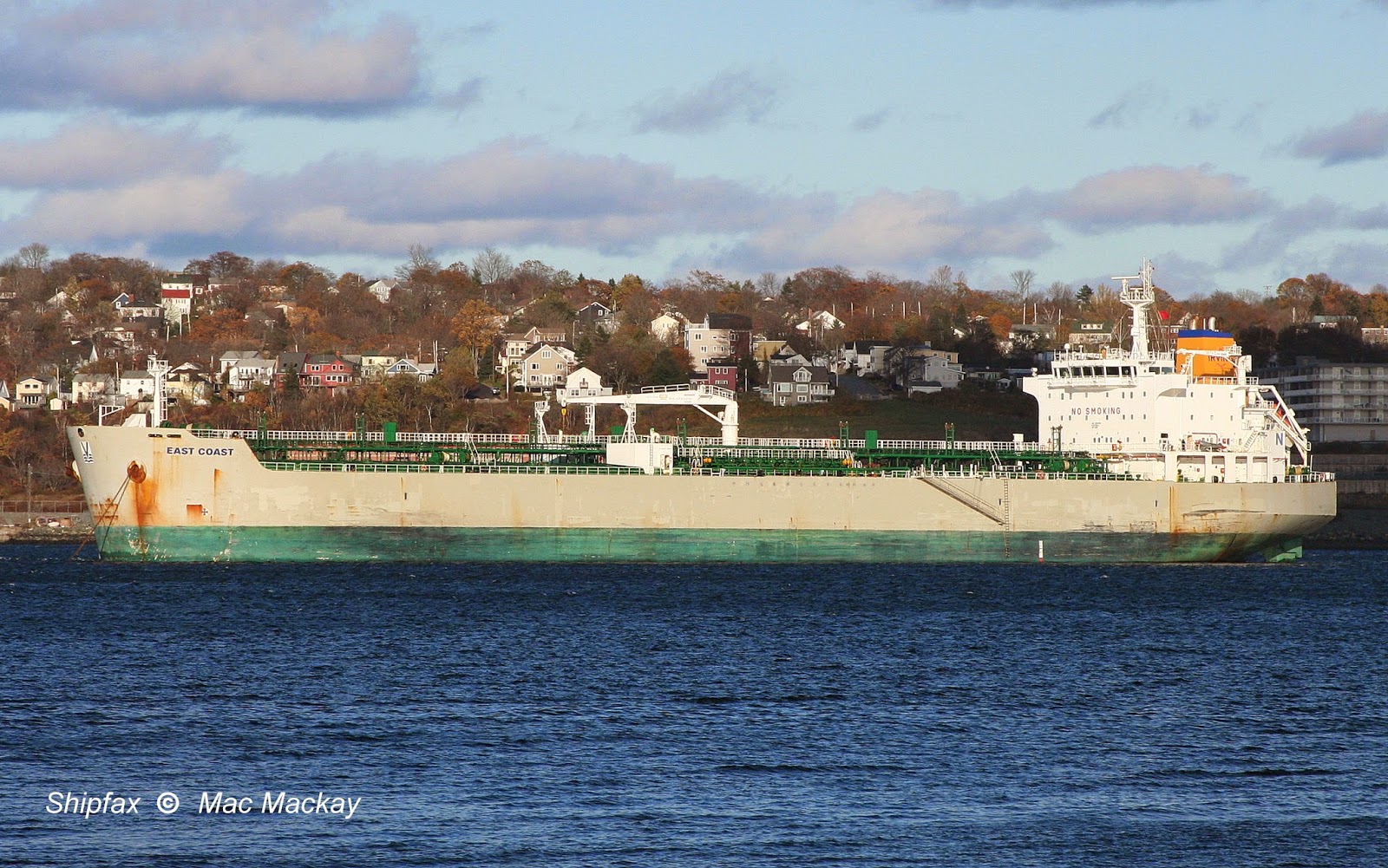 East Coast comes to anchor this afternoon in the lower harbour.

This is not the first time it has been in Halifax with its new name, but when it was here October 16, the fog was too thick to see it, let alone take a picture. It is here for bunkers, but may have to wait until the wind dies down before Algoma Dartmouth comes alongside. It is interesting that the ship would bunker with fuel other than Irving's own, but I understand that the Saint John terminal is very busy importing crude and exporting product due to work on the Canaport buoy, where the crude is normally unloaded. Some crude tankers are even going into the LNG terminal to unload.  A shuttle has also been set up with the Afrodite and  Great Eastern pressed into service as lighters to transfer crude from anchored ships to the refinery terminal. 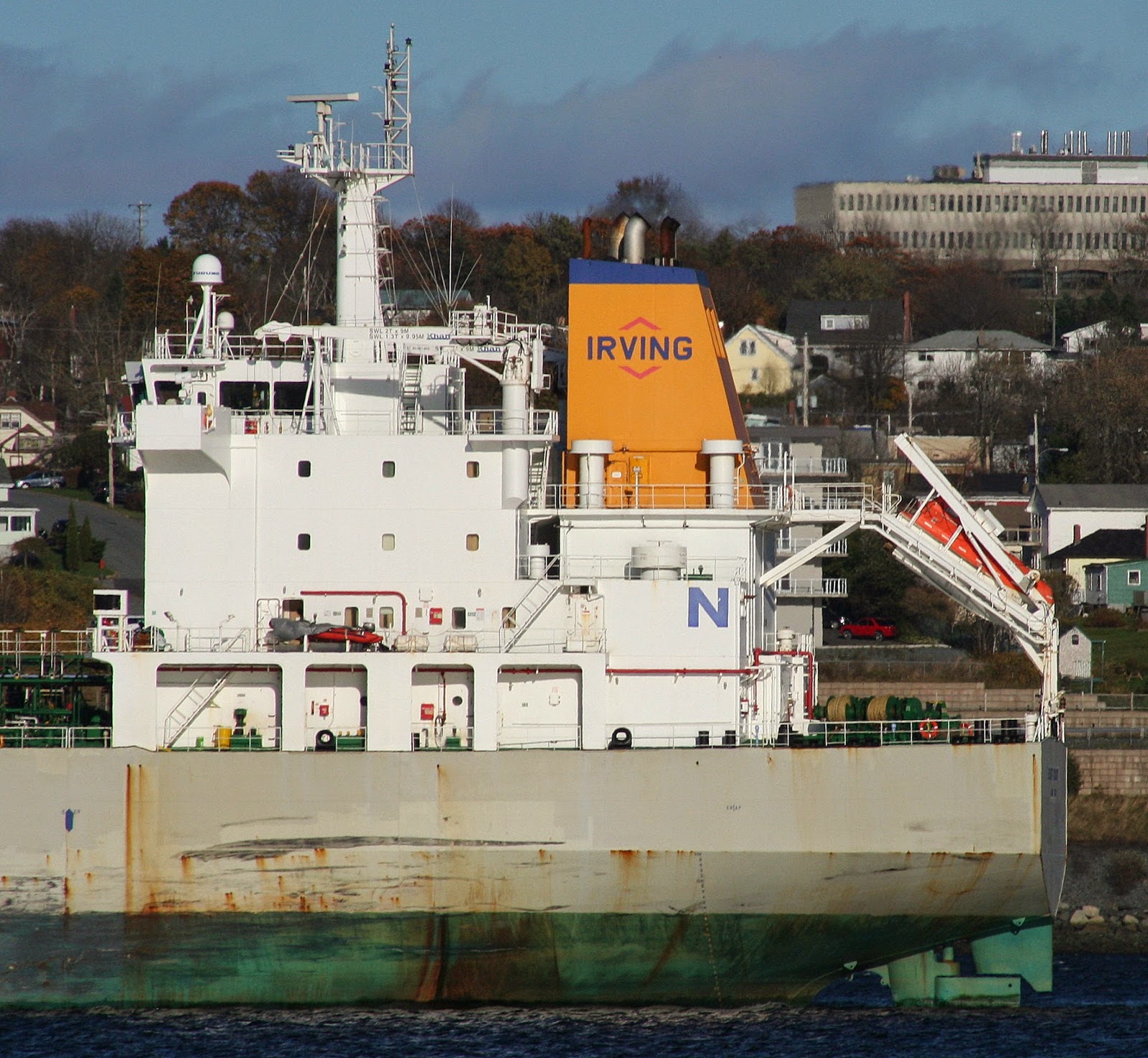 The letter "N" below the funnel  distinguishes the ship from its three sisters.

I wondered in my previous post if the ship would have its letter "N" replaced with an "E" - that has not happened yet. Perhaps uniquely in a tanker fleet, each ship carries the first letter of its name on its superstructure. Since all four of the ships are identical, this is likely a means of identifying them visually when the name isn't visible.
There is a credible rumour that Irving Oil will be acquiring a fifth charter tanker which will be named Nor'Easter. 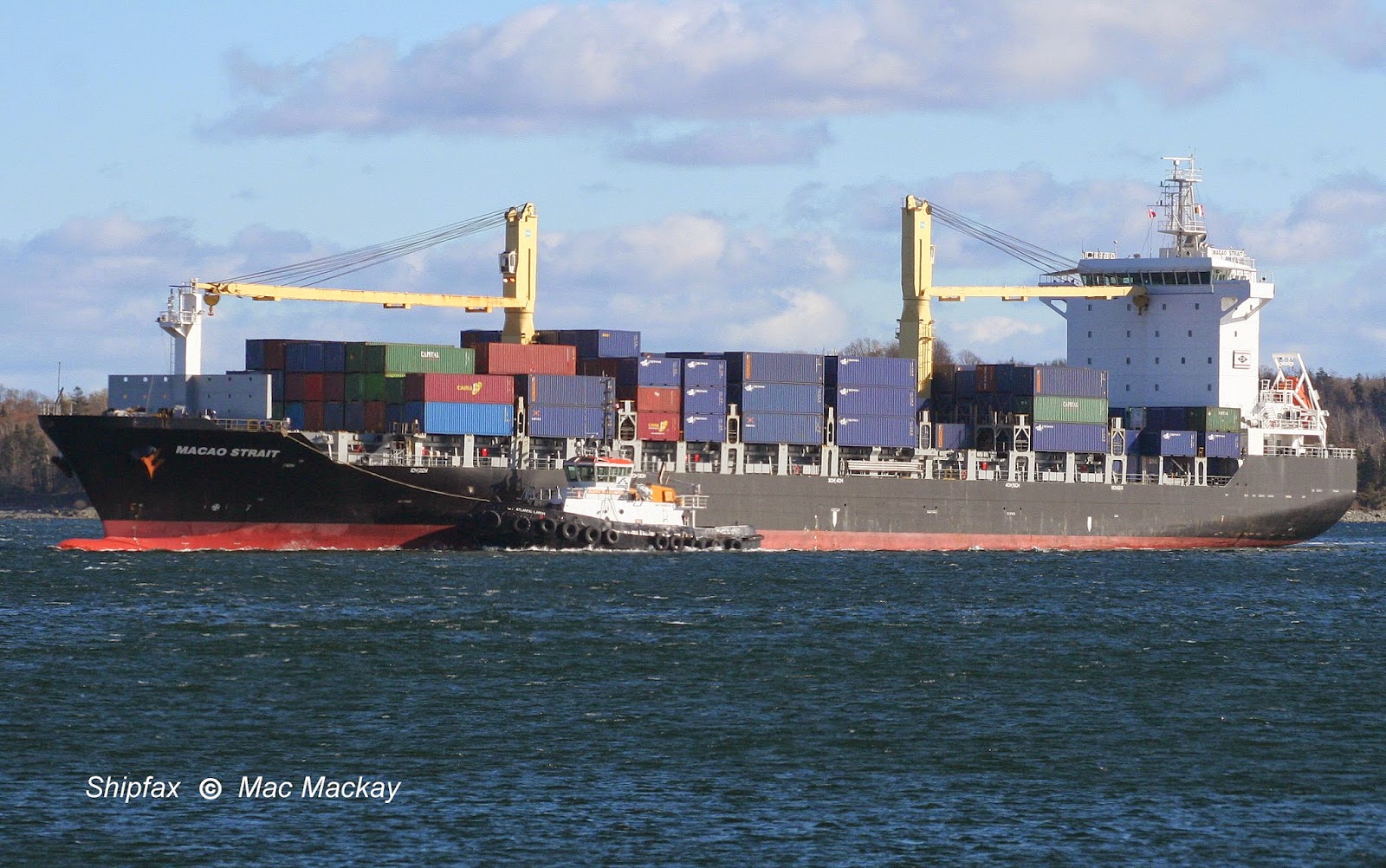 Atlantic Larch on the port bow, and Atlantic Willow on the starboard quarter (not visible) get set to turn Macao Strait in the stream off Halterm.One tug could do the job if there was no wind.

Melfi Lines ships change in and out frequently, so a first timer is not a rarity. Today's arrival Macao Strait is on its first voyage for Melfi from Europe to Cuba. The 21,108 grt, 25,903 dwt ship is a product of the Taizhou Kouan Shipbuidling Co in Taizhou, China in 2008. It is equipped with a pair of 40 tonne cranes and has a capacity of 1795 TEU of which 319 may be refrigerated. It is owned by the German company of Carsten Rehder and has changed names six times in its short life. It started off as Macao Strait but was soon renamed Niledutch Qingdao for a charter. When that ended in 2011 it reverted to its original name and in 2012 became BG Freight Atlantic. That only lasted to 2103 when it reverted again briefly, before becoming Vento di Ponente. It assumed its original name again earlier this year. It is registered in the Portuguese offshore registry in Madeira.


What was to be the last cruise ship of the 2014 season arrived off Halifax early this morning, but opted to keep on going. There were very high winds and seas at the time, and perhaps that is why it kept going. In any event it continued on its merry way at all of 12 knots until late this afternoon when it struck out across the Gulf of Maine and picked up its pace to 13 knots. This cruising speed may have been to give its passengers a more pleasant ride - I hope so, because it might have been unpleasant out there otherwise. 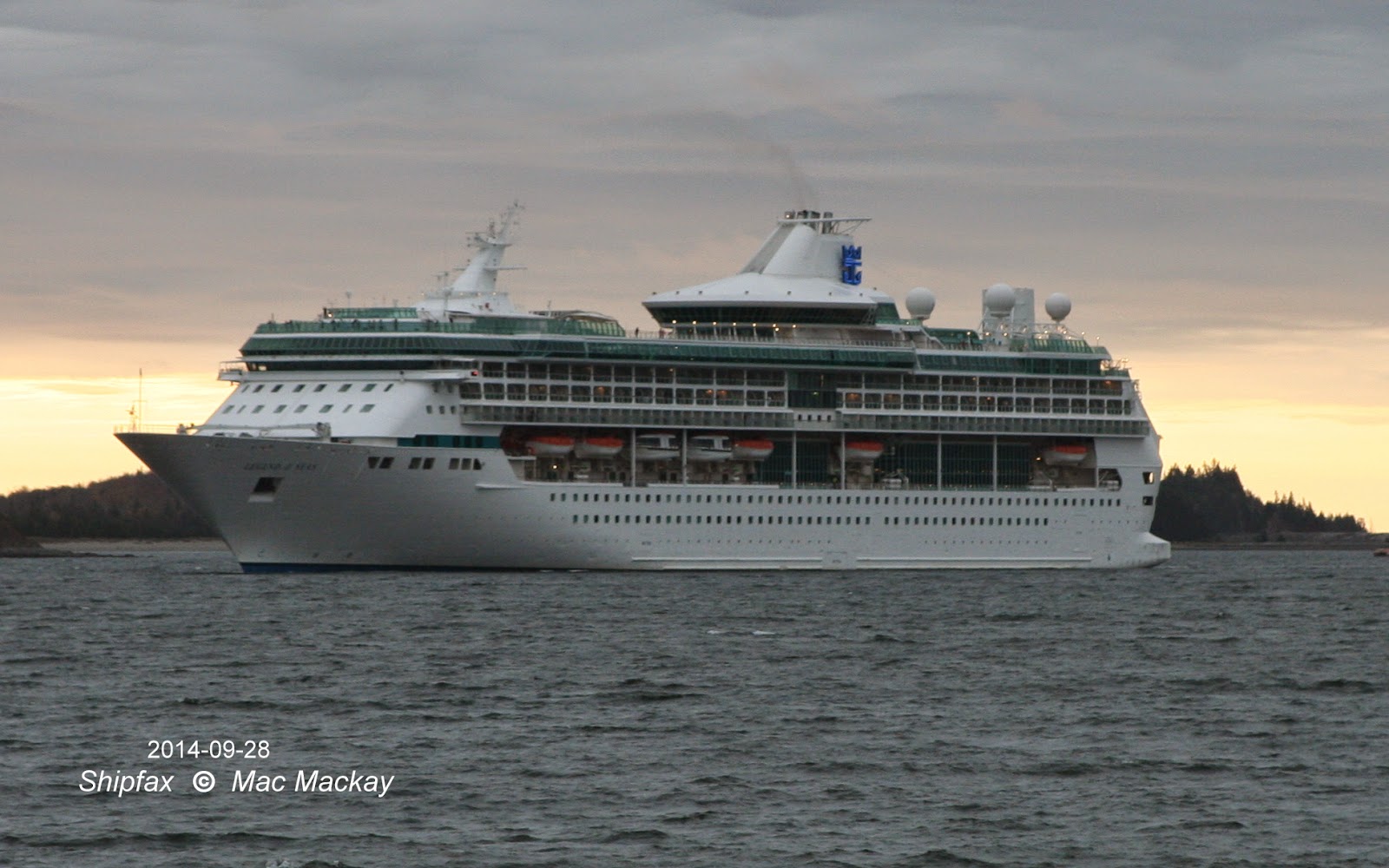 Legend of the Seas on a more placid day when it did arrive as scheduled in September.


Legend of the Seas was to be the finalist in the 2014 cruise season, but that distinction now reverts to yesterday's visitor Hamburg. This was the first year for this Legend to call in Halifax - see also: http://shipfax.blogspot.ca/2014/09/legend-arrives.html Seas had flattened, making it possible for the pilot to disembark safely when Fusion sailed this afternoon, but it was still breezy.

The wind was severe enough that the St-Pierre RoRo ship Fusion remained in port last night and waited until noon today to sail. Also the cargo ship Clipper Helvetia that was supposed to come up from Liverpool, NS this morning remained there.

High winds also forced the cancellation of the ferry services between Nova Scotia and Prince Edward Island and Nova Scotia and Newfoundland today. Also the Bay of Fundy service between Digby, NS and Saint John, NB was to resume today, but did not. The ferry Princess of Acadia passed Halifax last night en route from its repairs at the Verreault shipyard in Méchins, but it hove too off Yarmouth for the night due to wind and sea conditions.
The winds are headed for Newfoundland and Oceanex's Oceanex Avalon opted to go north about on its departure from St.John's yesterday. Instead of heading south, then through the Cabot Strait to the Gulf as usual, it set a course for the Strait of Belle Isle and will sail through the Mingan Passage, north of Anticosti Island on its way to Montreal.. Such a rerouting is not unheard of, but only occurs in the most severe conditions.