As reported yesterday the Tancook Island ferry is out of service for at least two weeks for engine repairs. It would normally be replaced on a temporary basis by the Scotian (built 1983 in Pictou) but that boat is already replacing another ferry on the Englishtown / Jersey Harbour run.
The Englishtown ferry is the busiest in the province, carrying 226,000 vehicles and 470,000 passengers in its year round operation. The current boat, the cable ferry Torquil MacLean, has been undergoing repairs at Pictou since July and is nearly 8 weeks overdue on its return to service. The refit, which was to replace the engine and generator and add more ice reinforcement to the hull was projected to cost $776,000. An additional $280,000 has been racked up for extra work.
Built in 2007 by A.F.Thériault+Son in Metéghan River, NS, it entered service in July 2008 and carries 15 cars. 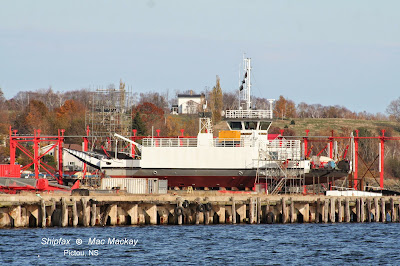 On the slip at Aecon-Fabco in Pictou today, with its bow ramp removed, Torquil MacLean looks to be ready for work soon.

Meanwhile at the other end of the province, A.F.Thériault +Son, are refitting the New Brunswick cable ferry R.G.L Fairweather. 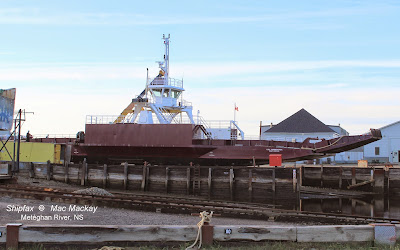 It operates on the Gondola Point run with twin William Pitt II. They are 25 car capacity boats, and one boat can usually handle the traffic in the off peak season.

Thériault is building the new ferries for Halifax harbour, to replace Halifax III and Dartmouth III.Their newer fleet mate Woodside I is on the slip in Lunenburg for its refit, but the newest ferry Christopher Stannix is able to cover the route in its absence.