HMCS Preserver returned from the Bedford Magazine (Jetty November November) this morning after spending most of yesterday and last night at the outpost.As usual with in-harbour shifts, it was a cold move. Dockyard tugs powered the ship both ways. 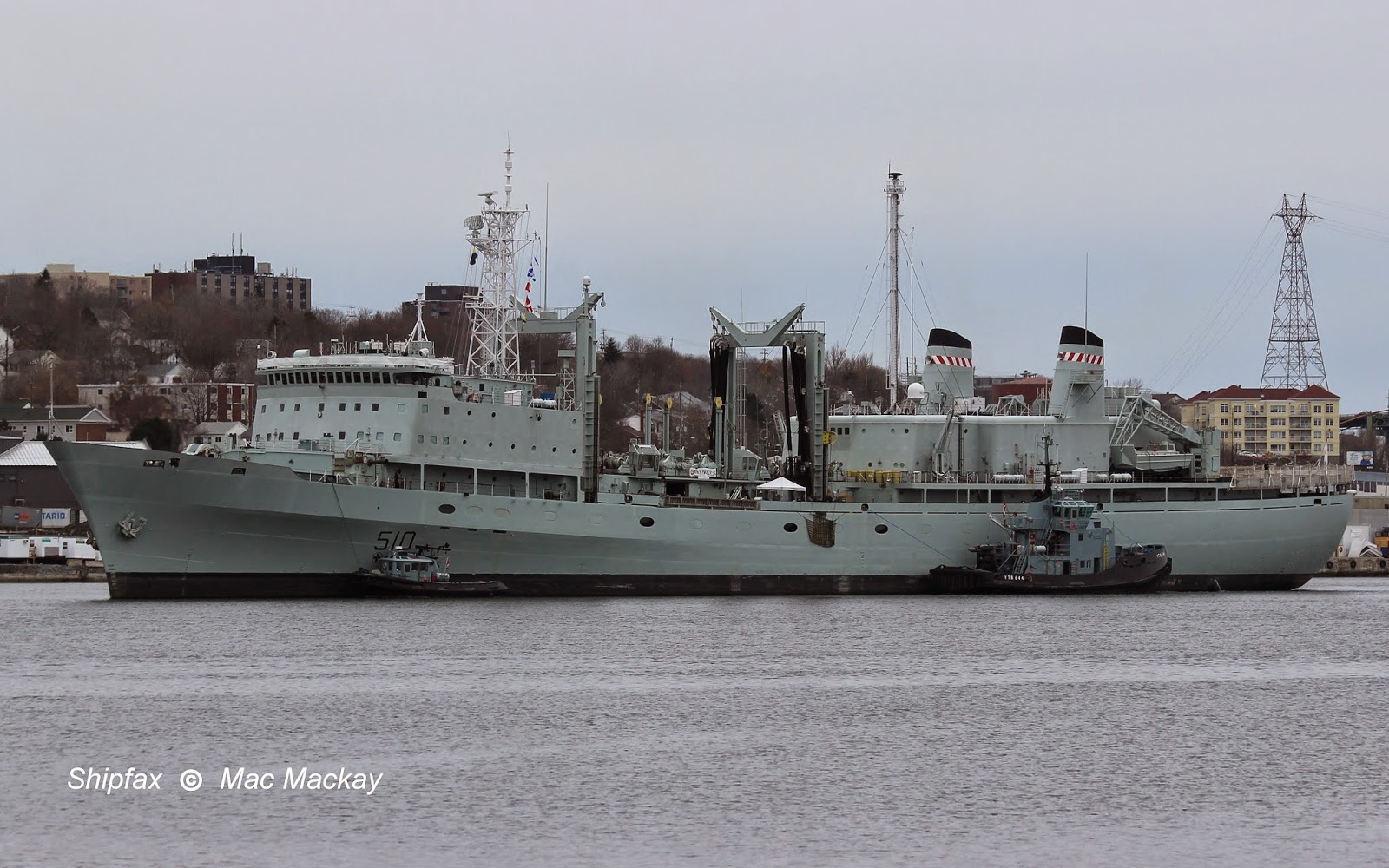 Preserver approaches Halifax Shipyards, southbound in the Narrows, on its return to HMC Dockyard. The dark area at deck level amidships is safety netting for the gangway.

The Bedford Magazine is the navy's munitions storage facility, and was built at the head of Bedford Basin to be sufficiently far away from populated areas to ensure  that a detonation would cause minimal collateral damage. I am not so sure that would be the case today, since residential areas of Bedford and the Burnside Industrial Park are now in close proximity.

On July 18, 1945 an explosion on a barge load of ammunition at the Magazine Pier started a fire and a chain reaction of blasts over a period of two days, which threatened to equal the Halifax Explosion of 1917. Valiant efforts by civilian and military fire crews eventually brought the situation under control, but not before a large portion of the north end of Halifax was evacuated, windows were shattered all over town and roofs collapsed. Due the war's end there was a huge amount of explosive material stockpiled outdoors as naval vessels de-stored and ammunition was brought in from as far as Bermuda. There had not been time to store it all in bunkers and a large quantity stacked on the pier was quick to ignite.

Heroes of the day included two civilian fireboat crews.  The firetug Rouille operated by the City of Halifax and the fireboat James Battle operated by the National Harbours Board fought the blaze. Navy firetugs were there too, but I do not have their names at hand.


James Battle was built by Detroit Shipbuilding Co in 1900. An imposing vessel, with one deck and twin funnels, it served the City of Detroit until 1941 when it was sold to Sincennes-McNaughton Line of Montreal. They chartered it to the National Harbours Board and assigned it to Halifax in 1943. After the Bedford Magazine fire, its boilers were in such bad shape that it was returned to Montreal. There it was rebuilt several times, and as a diesel tug, it operated in the Port of Montreal and in the Seaway for McAllister Towing until 1991 when it was sold for scrap. It retained full firefighting capability until the end.
There are several photos of it on line as built: http://en.wikipedia.org/wiki/Fireboats_of_Detroit 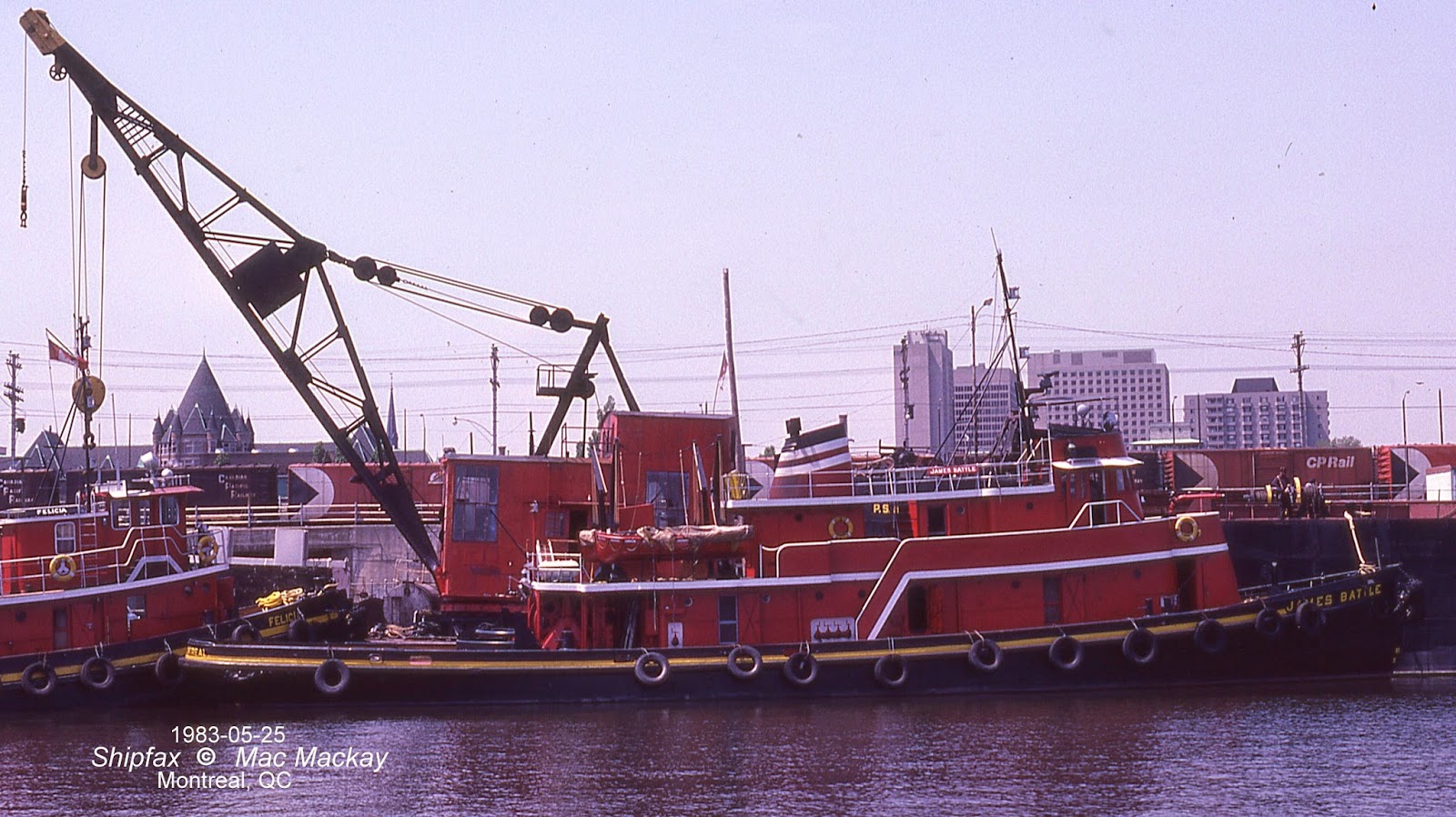 By 1983 James Battle had been rebuilt as a stylish motor tug, but retained  firefighting equipment.

Rouille was built for the City of Toronto in 1929 by Collingwood Shipbuilding. Far too large for their needs it was leased to the City of Halifax in 1941. It fought several fires in the port during the war, including the Volendam in June 1945. It had a crew of 15 plus 13 firefighters on call and was also the official greater for returning troop ships, giving water displays.
In August 1945 it took over from James Battle and worked for the National Harbours Board until April 1946 when it was sold. New owners J.P.Porter+Co used it as a tug, and it sank December 3, 1954 off Cape Smokey with the loss of five lives .
It could pump 4500 gpm with 3 fire guns and 16 hose outlets on deck. 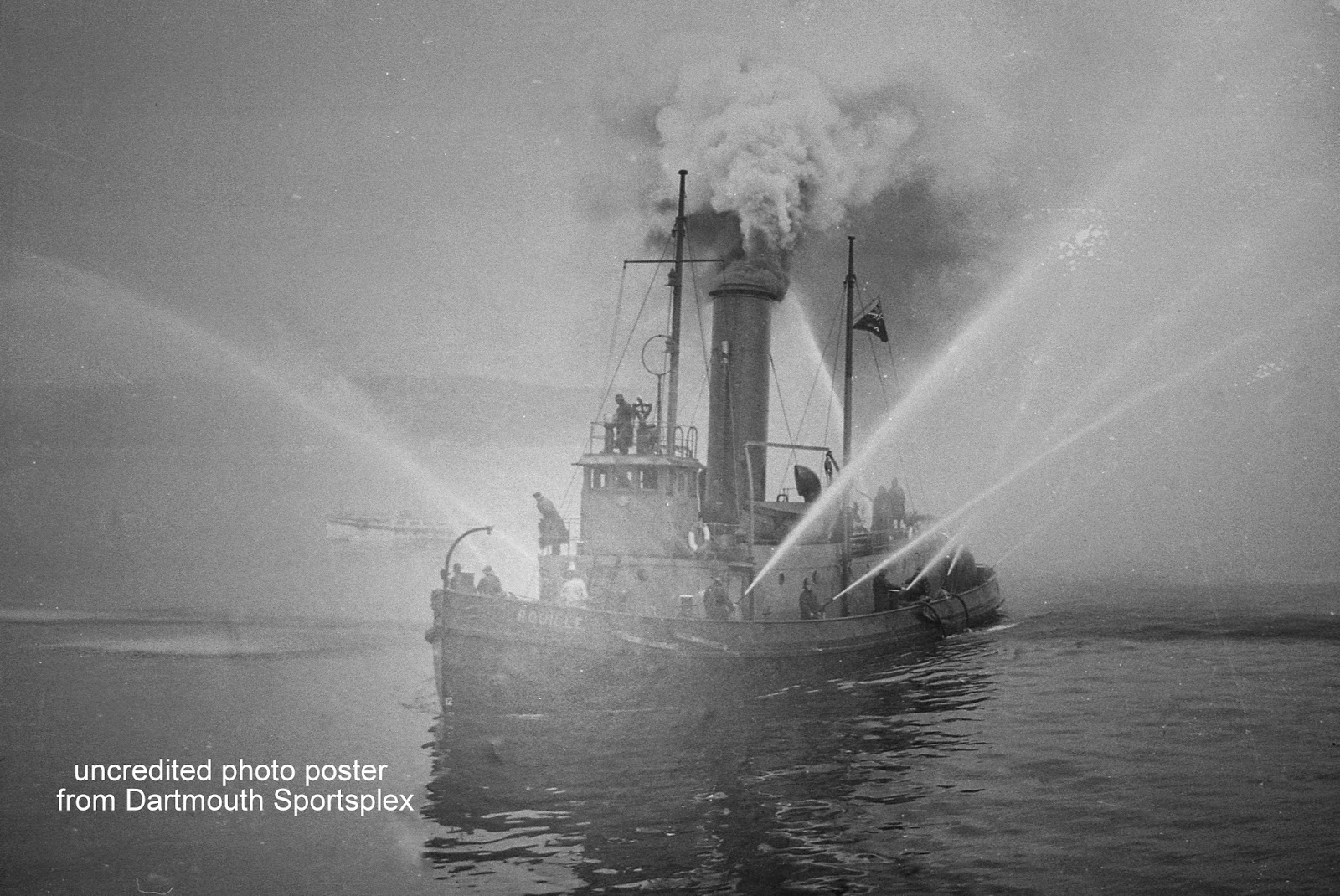 This uncredited photo poster appeared in the Dartmouth Sportsplex community room and shows Rouille in all its glory.

The Royal Canadian Navy augmented its fire fighting capability in Halifax after the Magazine incident, transferring in the Nashwaak from Sydney, and taking delivery of two new boats before the winter of 1945.

Ever since then the port has relied on the naval fireboat for firefighting. After years of debate on whether the Port or the City should also have a fireboat, civilian tugs and offshore suppliers began to be equipped with firefighting capability and the debate died out.

Currently the RCN has CFAV Firebird in operation, with Dockyard Fire Department firefighters on board.  Atlantic Towing Ltd has much superior firefighting capability on Atlantic Oak and Atlantic Willow, although their crews are not career firefighters.

The Bedford Magazine is now much safer, and has its own fire department in house. As a reminder of 1945 there are areas around the magazine that are still off limits due to the presence of unexploded munitions.