Back to Atlantic Container Line to fill in a blank from the last post.

It was a gruelling service, and as might be expected it was tough on ships. The ships only lasted a few years on the route, and most went on to other lives, which turned out to be pretty dramatic:
MONT LAURIER
Mont Laurier was 300 miles NW of the Azores on January 13, 1973 when cargo broke loose in a storm when the ship rolled 30 degrees. Fire broke out gutting the ship. The 22 crew took to rafts, and one capsized, with the loss of six lives. The ship was eventually taken in tow. Declared a constructive total loss, the underwriters sold it to Lauritzen Group. They had Wartsila, Turku rebuild and lengthen the ship. It re-entered service in December 1973 as Leena Dan. Lauritzen chartered the ship to Union Steamships of New Zealand as Union Sydney from 1974 to 1977. In 1979 Leena Dan became Nopal Dana when sold to an offshoot of DFDS A/S of Copenhagen. It served several owners until 1986 when it became Seaboard Trader for Bayside Marine Trading Inc of Panama (Seaboard Marine of Miami). Photos indicate that its weather deck was widened to carry more containers, and its bridge wings extended correspondingly.http://www.shipspotting.com/gallery/photo.php?lid=66529
It was sold for the last time in 2013, renamed Vegas and delivered to Alang, India for scrap May 14, 2013.
The first of the quartet to leave the CARE fleet, it was also the last to operate commercially. To my knowledge it never called in Halifax.

Mont Louis showing the ravages of winter work in 1978. This was its last year of operation for CARE Line.
Mont Louis operated on the  CARE run until it was chartered out as Bore Moon in 1979, returning to the CGT fold in 1981 as Mont Louis, but was assigned to other routes. On August 25, 1984 on a voyage from Havre to Riga, it sank 12 miles off Ostend, Belgium after colliding with Olau Britannia, a 14,981 gt passenger ferry. Olau Britannia's bulbous bow penetrated Mont Louis's engine room and the ship broke in two on September 11. Its cargo, which included containers of uranium hexafloride, was recovered by October 4. The hull sections were raised September 29 and towed to Zeebrugge where they were eventually broken up. 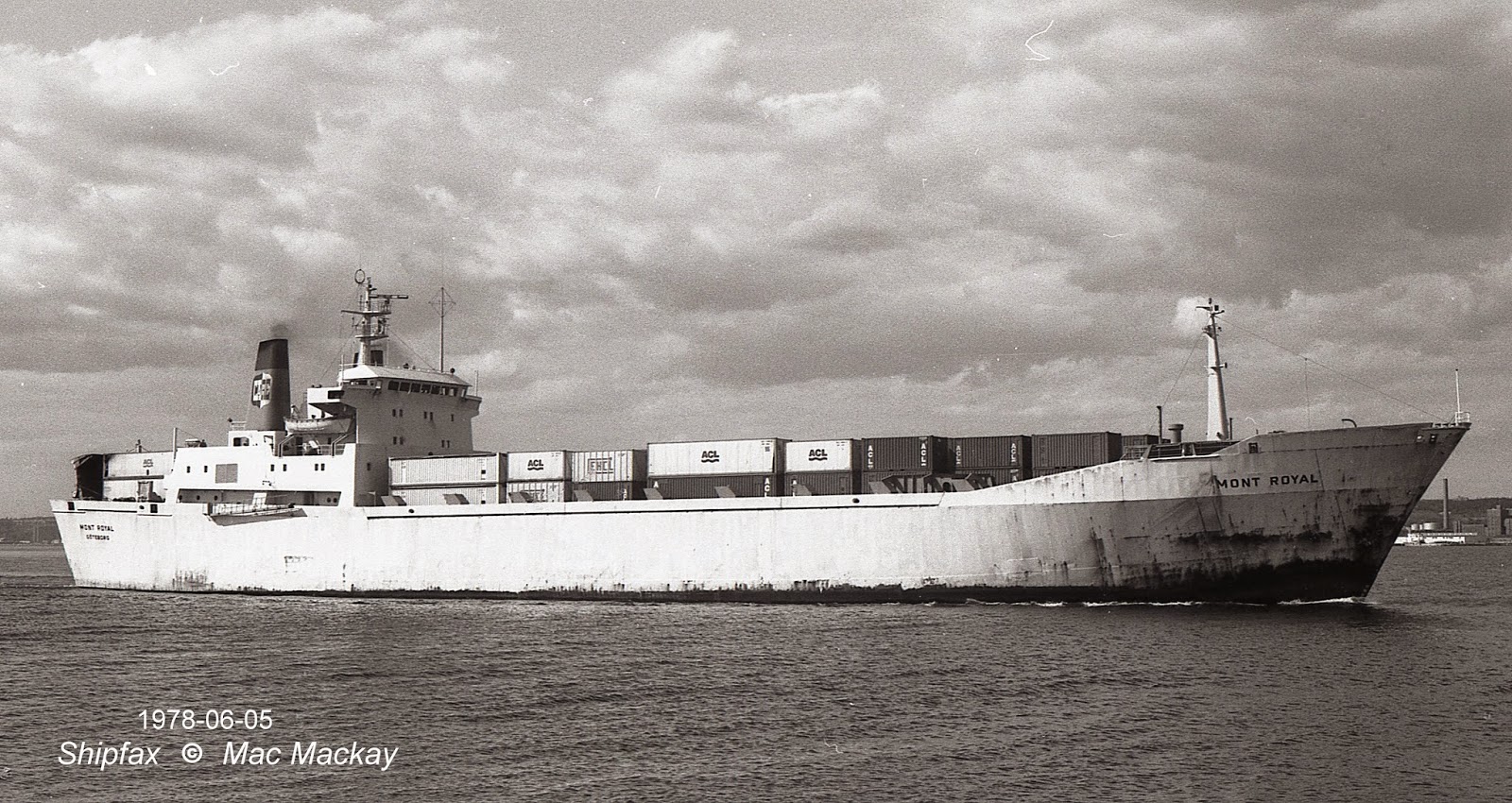 Mont Royal before lengthening, began to call in Halifax in 1978.
Mont Royal served until 1978 when it was taken in hand and lengthened 83 ft, increasing its gt to 10,999 (its shelter deck becoming a closed deck). Its container capacity then became 430 (202 below deck) and it could carry 110 Opel equivalent cars or 77 TEUs in RoRo. It arrived in Halifax September 26, 1978 in its new configuration as Atlantic Premier. The St.Lawrence service had been integrated into ACL and so it was given an ACL name. 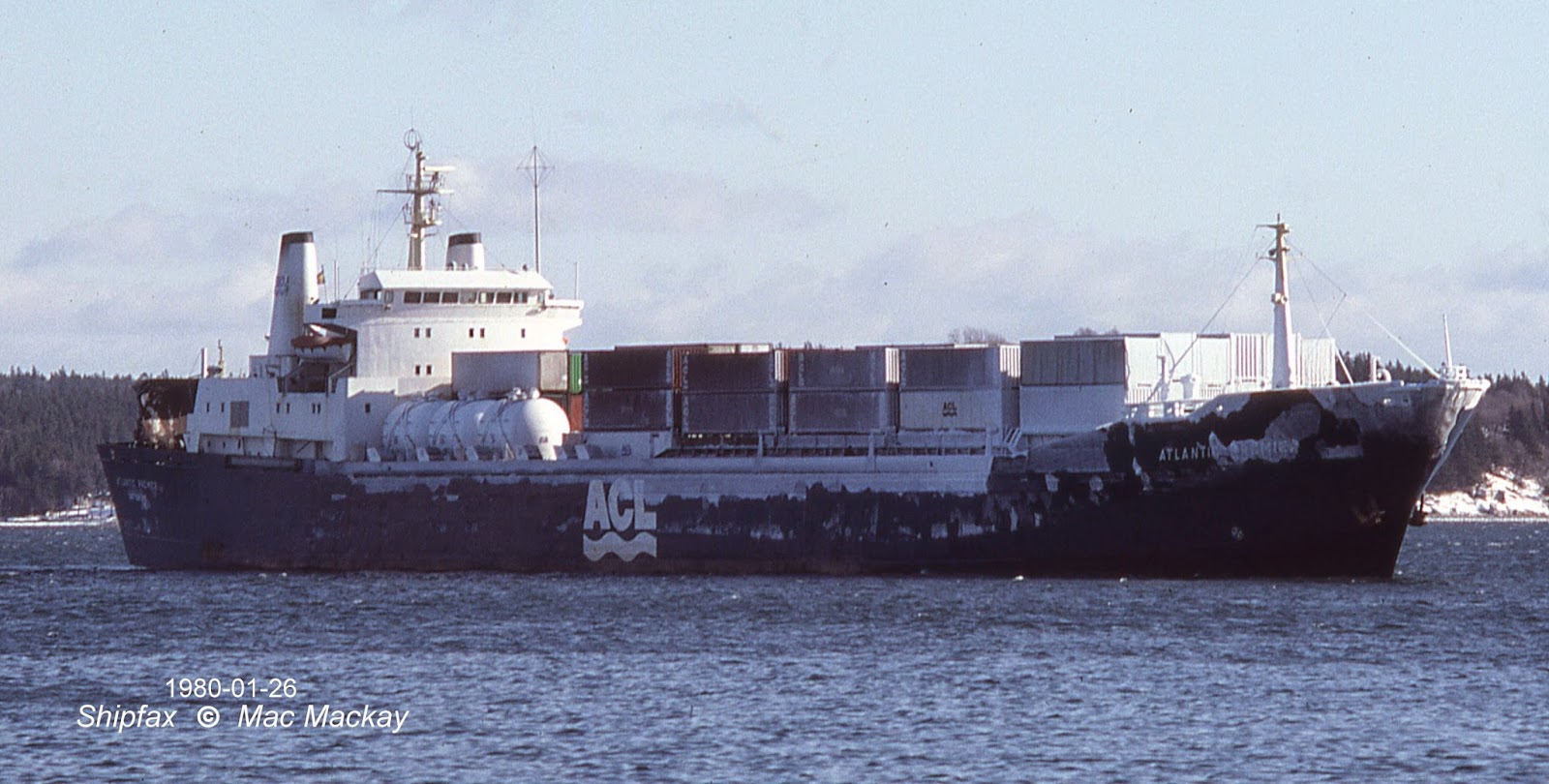 After lengthening, it came back in ACL colours and with a new name.

In 1982, after a reorganization of ACL routes, the ship was reassigned, renamed Incotrans Premier in 1984 and Atlantic Premier again in 1985. It was then transferred to Brostrom's Bore Line (Singapore) and renamed Atlantic Star (but not within ACL).
In 1986 it was converted to carry china clay (which is considered to be a slurry) and paper products. A side door was added for fork lift loading of paper rolls, and the ship was renamed Canada Maritime under CP Ships management calling on Canadian east coast ports.

Repap Enterprise ghosts in to Halifax to load because of ice in the Miramichi River. 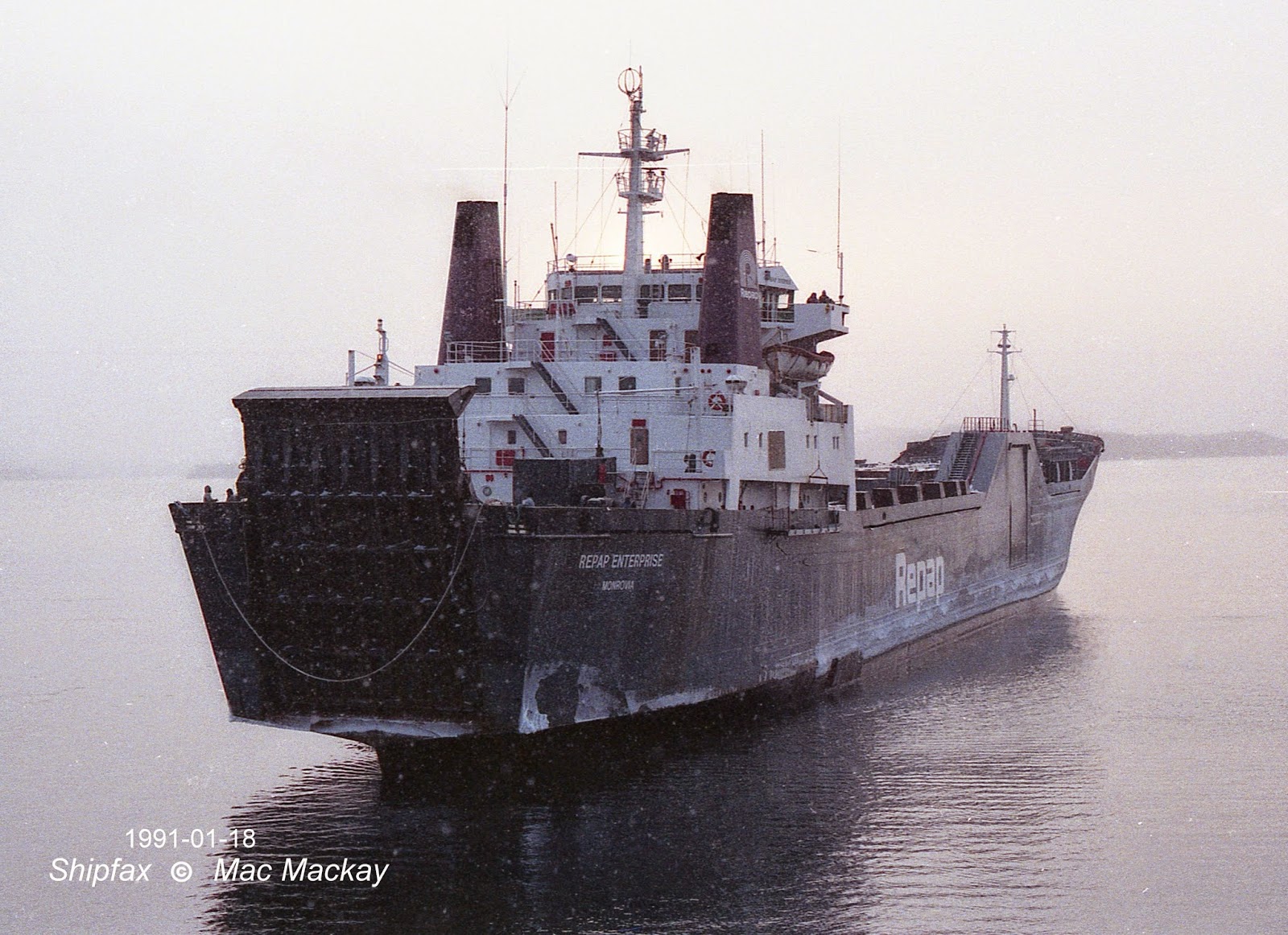 As rebuilt it had a starboard side door which was used to load paper.
In 1986 Repap, a Newcastle, New Brunswick paper manufacturer acquired the ship, renamed it Repap Enterprise with CP Bulkship Services Ltd as operators. I understand it also had acid tanks fitted. It began year round service to the Miramichi, and was frequently damaged in or by ice, calling in Halifax for repairs. First in February 1987, again in 1988. November 1-5, 1989 it had an engine room fire and came in to Halifax for repairs. In January 1991 it diverted to Halifax due to severe ice in the Miramichi, and its paper cargo was trucked to Halifax for loading at pier 21-22.
It arrived in Halifax January 18, 1992 and went into layup until August, when it was sold and renamed New Enterprise for Panama flag (later Honduras) owners. In 1992 it became Neptune Princess (Malta) and in 1995 Marmara Princess for Turkish owners. In 2002 it was laid up with surveys overdue and finally arrived at Alang, India for scrap October 19, 2004.

On joining ACL, the ship carried the new ACL logo and funnel mark.
The sole Wallenius ship in the group seems to have lead a charmed life by comparison. Montmorency was also lengthened 83 ft, arriving in Halifax August 14, 1978 with the new name Atlantic Prelude. When the ACL service was rationalized it became Incotrans Prelude from 1984 to 1985, then Atlantic Prelude again until 1986.
Wallenius sold the ship to Greek owners in 1986 and it was renamed Valiant, becoming Levant Fortune in 1991 and Arion in 1993.
Luck ran out February 11, 2005 when it ran aground NW of Chios. All 20 persons aboard were evacuated and the wreck was abandoned. On September 22 Tsavliris Salvage refloated the wreck and towed it to Aliaga, Turkey for scrap.

ACL
As trade on the St.Lawrence improved, the “Mont” ships proved to be small and with the loss of Mont Louis, inadequate to maintain a regularly scheduled service. In 1978  since CGT, Wallenius and Swedish-Amerika were all partners in Atlantic Container Line the owners integrated CARELine into ACL, lengthened the existing ships (see above) and brought in two more ships on charter from Stena Container Line. The routing then became:
Southampton, Antwerp, Rotterdam, Le Havre, Liverpool, Bremerhaven, Halifax, Montreal, Gothenburg 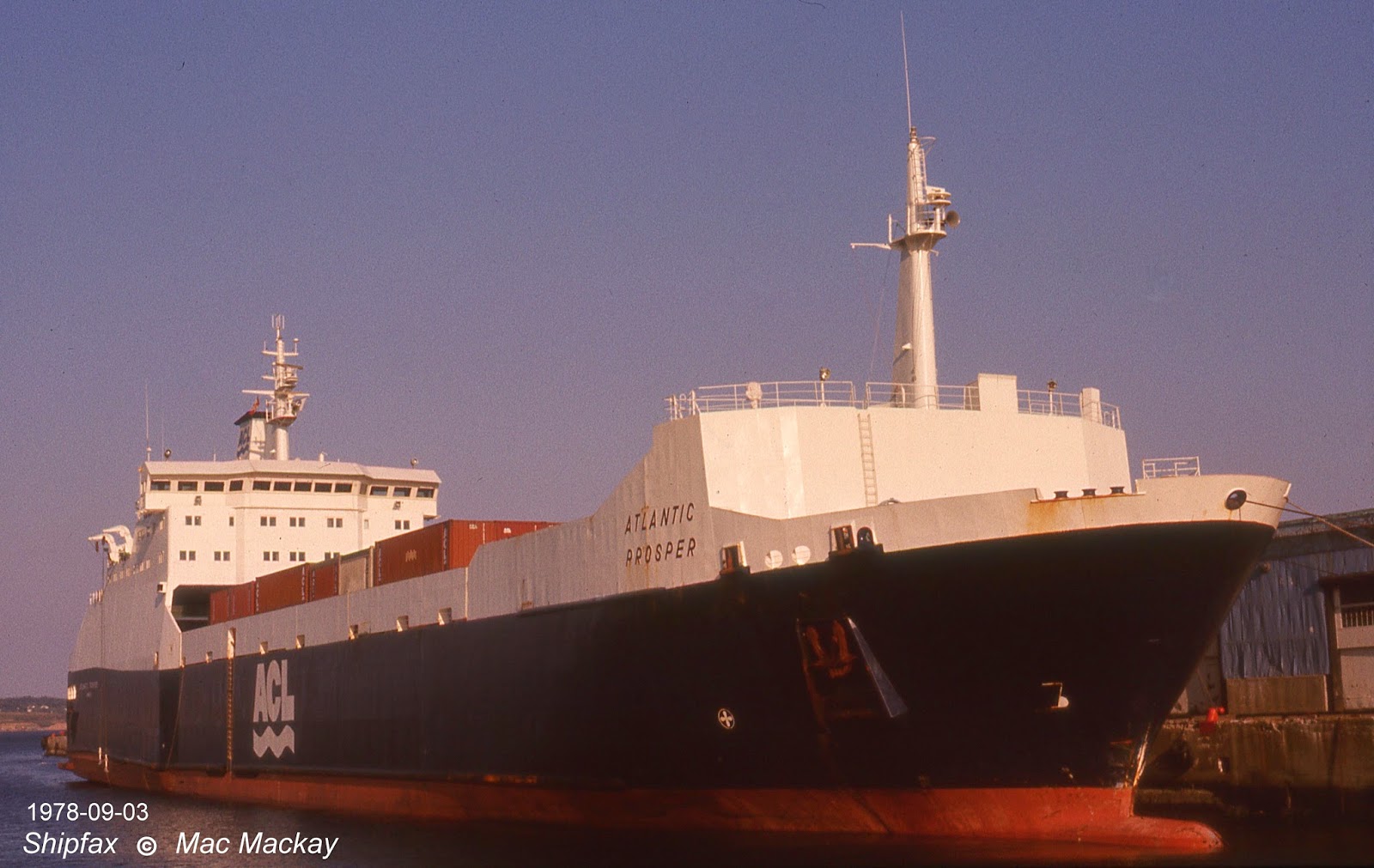 Stena Line built many ships of similar pattern. The container deck was served by a ramp and could also carry RoRo cargo. This photo was taken before the hull sponsons were added. 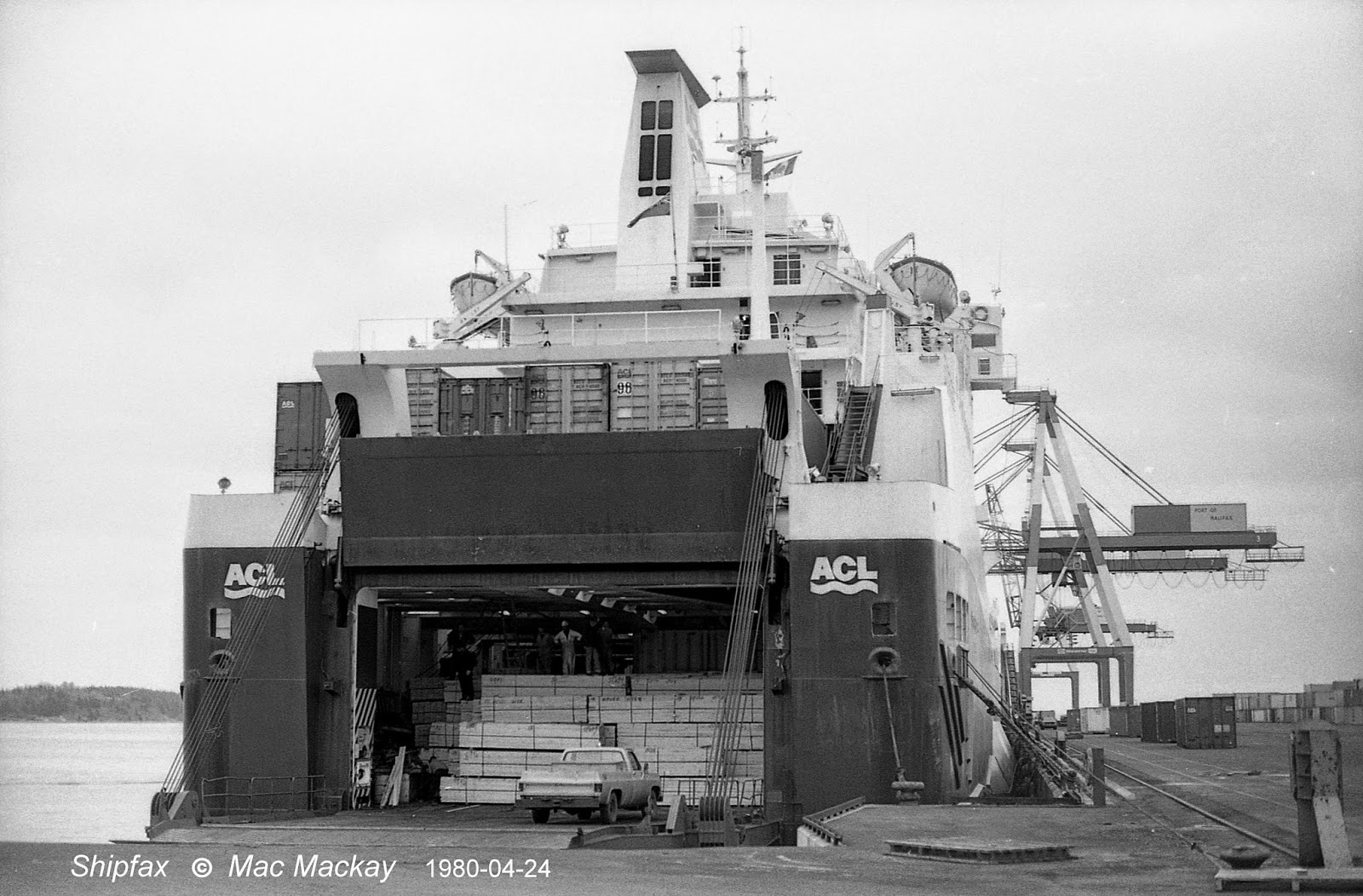 Apparently breakbulk loads of baled lumber were also carried on the RoRo deck. The hull sponson is barely discernable on the starboard side.

Atlantic Prosper was laid down as Stena Prosper, but delivered February 6, 1978 with ACL name and colours. A product of Hyundai, Ulsan, the ship measured 5466 gt, 8811 dt. Intended for Baltic service it was built to a high ice class. But, after only a year on the rigorous Trans-Atlantic service, sponsons were added to improve stability. These added only about a meter to the ship's overall width, and as with big sister “S” series G1 ships, the sponsons were not popular with pilots!

ACL discontinued the St.Lawrence service in 1982, and Stena reassigned the ship. It served as 82: Stena Ionia , 81: Merzario Ionia, 82: Stena Ionia, 85: Stena Gothica, 88: Bore Gothia and finally 1996: Finnbirch on charter to Finnlines. It was in this service while on a voyage from Helsinki, Finland to Aarhus, Denmark that it was caught in a severe storm and capsized in 5 meter waves in the area of the Swedish Gotland/Oland islands. Two persons perished and helicopters rescued the 12 survivors.

ATLANTIC PROJECT
Atlantic Project, laid down as Stena Project, was delivered by Hyundai, Ulsan March 23, 1978 and was also fitted with sponsons in 1979.
On the deadly night of February 15, 1982 it was caught in the same storm that sank the oil rig Ocean Ranger (with 83 dead) and Mekhanik Tarasov (30 dead). A fire broke out on Atlantic Project when the ship was between Nova Scotia and Newfoundland, en route from Bremerhaven to Halifax. Fortunately the crew was able to extinguish the fire themselves and the ship arrived in Halifax safely the next day. Had the fire gained control it is unlikely that any outside help would have been available due to the severe weather.
It was returned to Stena in 1982 and served as: Merzario Hispania, 83: Stena Hispania, 84: Kotka Violet, 85: Stena Hispania, 86: Stena Britannica and 88: Bore Britannica. On March 14, 1991 it collided with Droning Margrethe II in fog, punching a hole in that ship's side. One of its crew was lost before it could be beached off Rodbyhavn, Denmark.
In 1996 it was also chartered to Finnlines as Finnbirch. It served without incident until it arrived at the breakers in Alang September 3, 2011.
Since this ship was never obliging enough to sail in front of my camera, I will refer to photos by others on Shipspotting.com. These show the hull sponsons and the enclosed weather deck added after it left ACL service:

Footnotes:
1. Wallenius fans will be pleased to learn that the company did not deviate from its company naming scheme. There is indeed an operatic character named Montmorency in Léo Delibes opera Jean de Nivelle. Wallenius was thus also able to fit into the theme of important Quebec towns with geographical features. Montmorency Falls, east of Quebec City is higher than Niagara.
For the record Mont Royal is the mountain in the middle of the island of Montreal that gives the city its name, Mont Laurier is a Laurentian ski area, and Mont Louis is a prominent headland on the Gaspé coast.

2. There is also an excellent French language web site on the original four M class ships, with lots of photos and some English pages:
http://www.maquettes-marmar.net/fichemaq/montlouis/mont_louis.html
.﻿
Posted by Mac at 10:47 AM