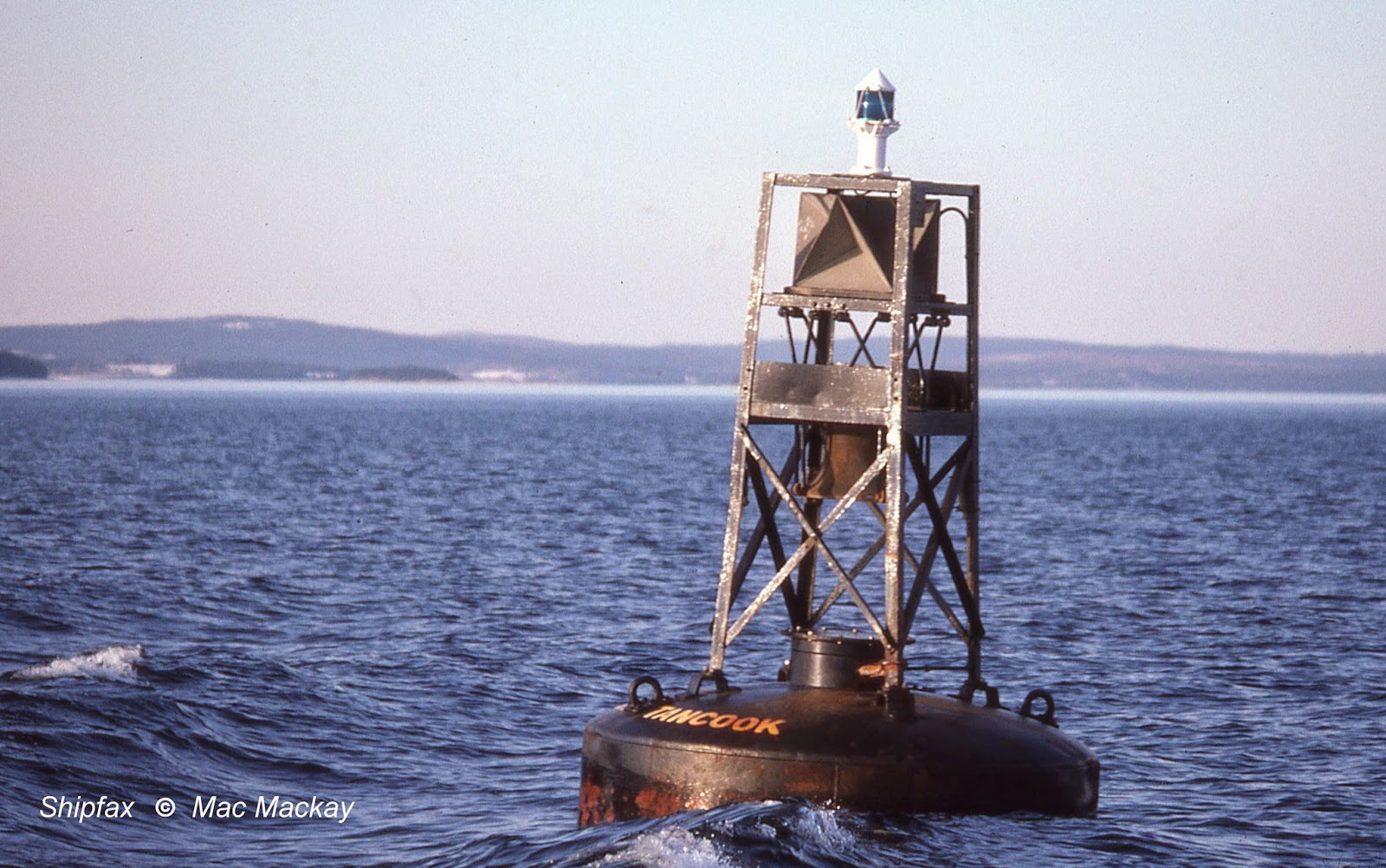 Plunked down at the entrance to Mahone Bay, are two islands, named Big Tancook Island and Little Tancook Island. Big Tancook has about 120 year round residents, and Little Tancook about 35. The summer population is somewhat larger, swelling to perhaps 200.
Transportation to the mainland is provided by the Province of Nova Scotia's ferry William G. Ernst. It makes the six mile run about three times a day, but there have been problems this year. In June it had a cracked prop, then in August it failed a Transport Canada inspection. The ferry, built in 1982, does not meet current stability regulations and had its passenger capacity reduced from 92 to 45 during the high point of the summer season. 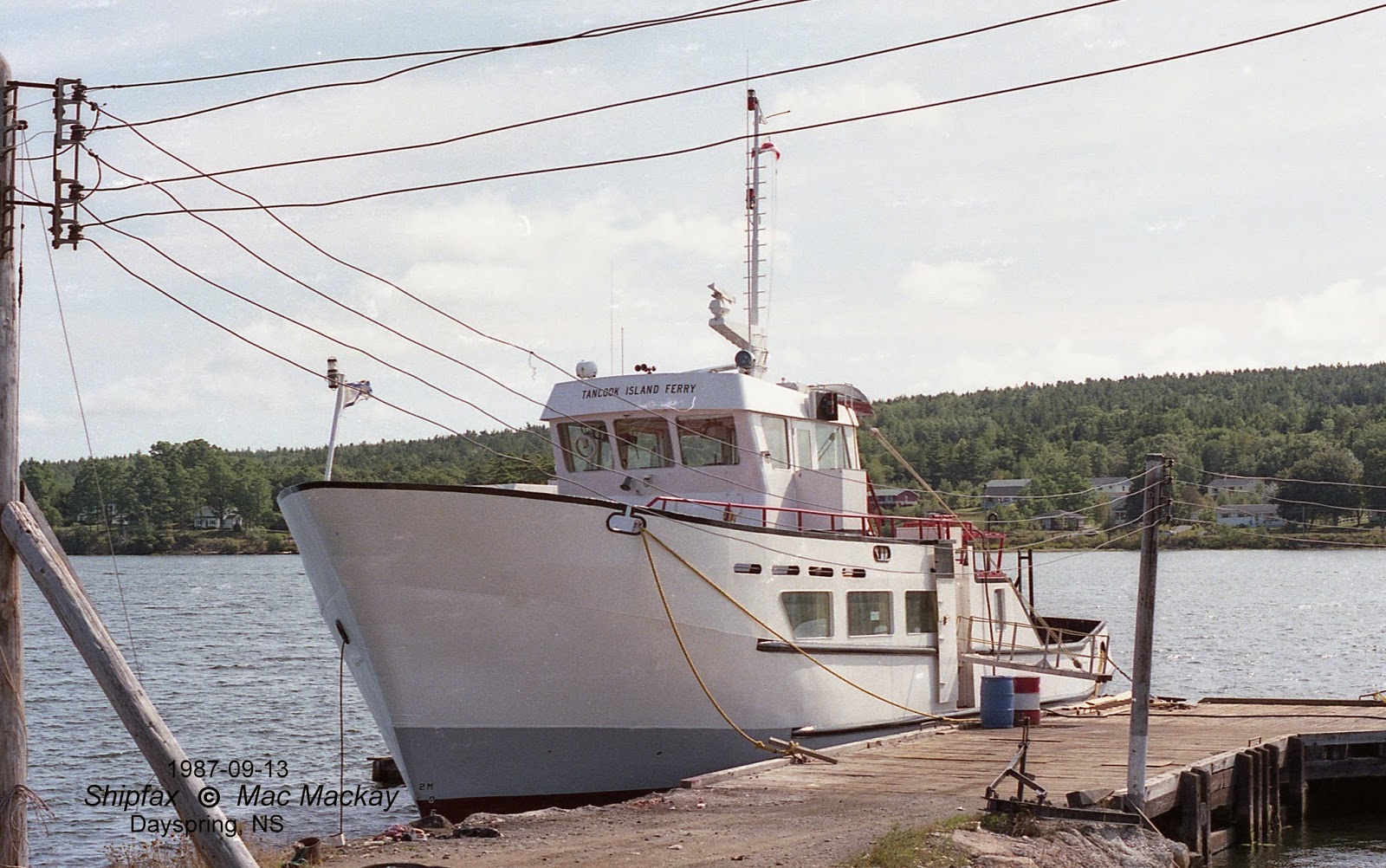 On November 8 it was withdrawn from service due a port engine failure, and may be out of service for two weeks or more, just as the residents are ramping up for the lobster season by bringing in bait and fuel. 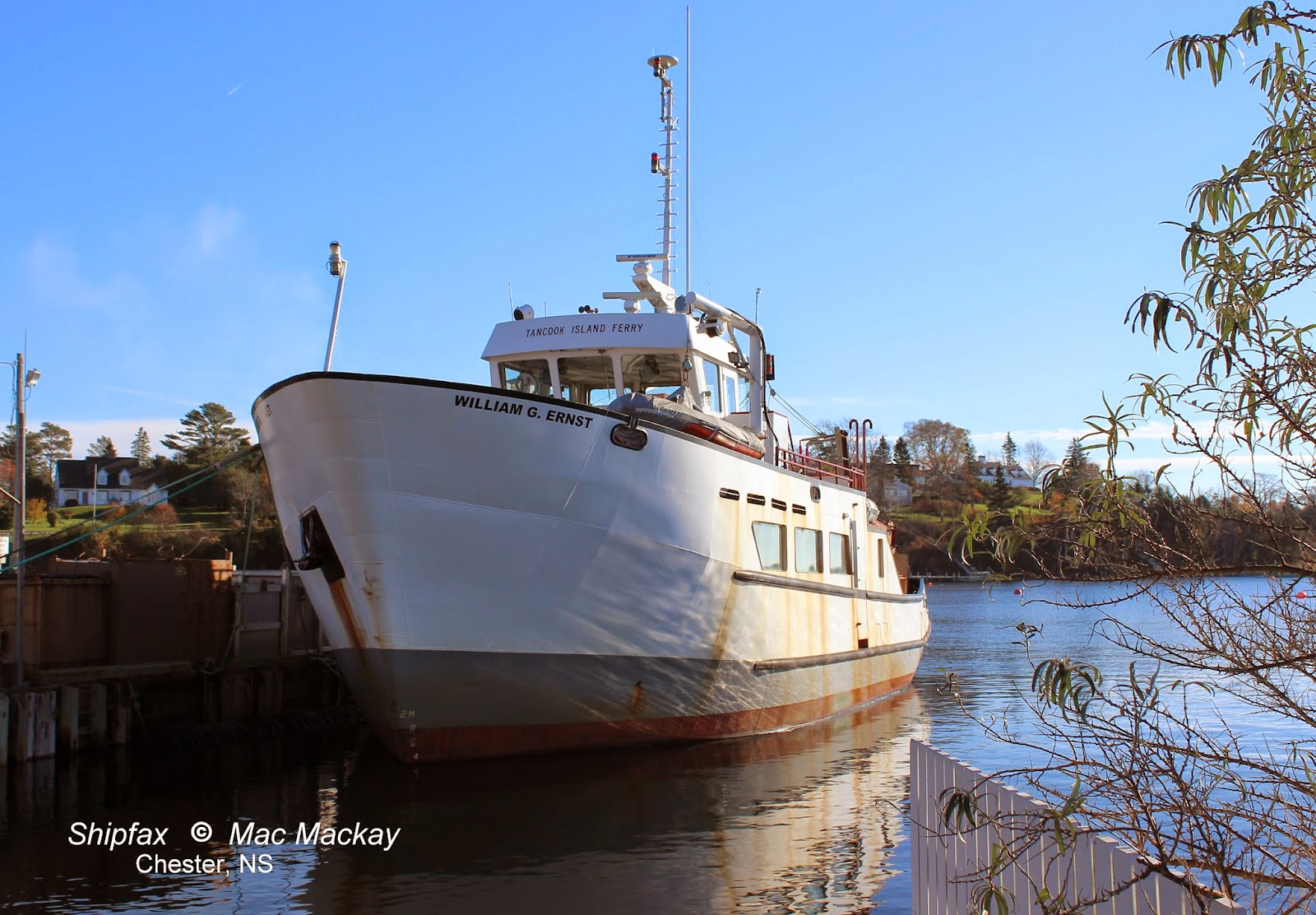 William G. Ernst was built by Georgetown Shipyard in Prince Edward Island and delivered in June of 1982. In 1997-98 it was refitted and a new large hydraulic crane was installed. In the meantime a substitute ferry was equipped with a school bus on deck, since many of the passengers are students going in to Chester to school. Big Tancook's one room school house (the last in Nova Scotia) only teaches the lower grades.

I made my first trip to the Tancooks in 1981, the last year of operation of the previous ferry, Shoreham. It was built in 1961 in Metéghan 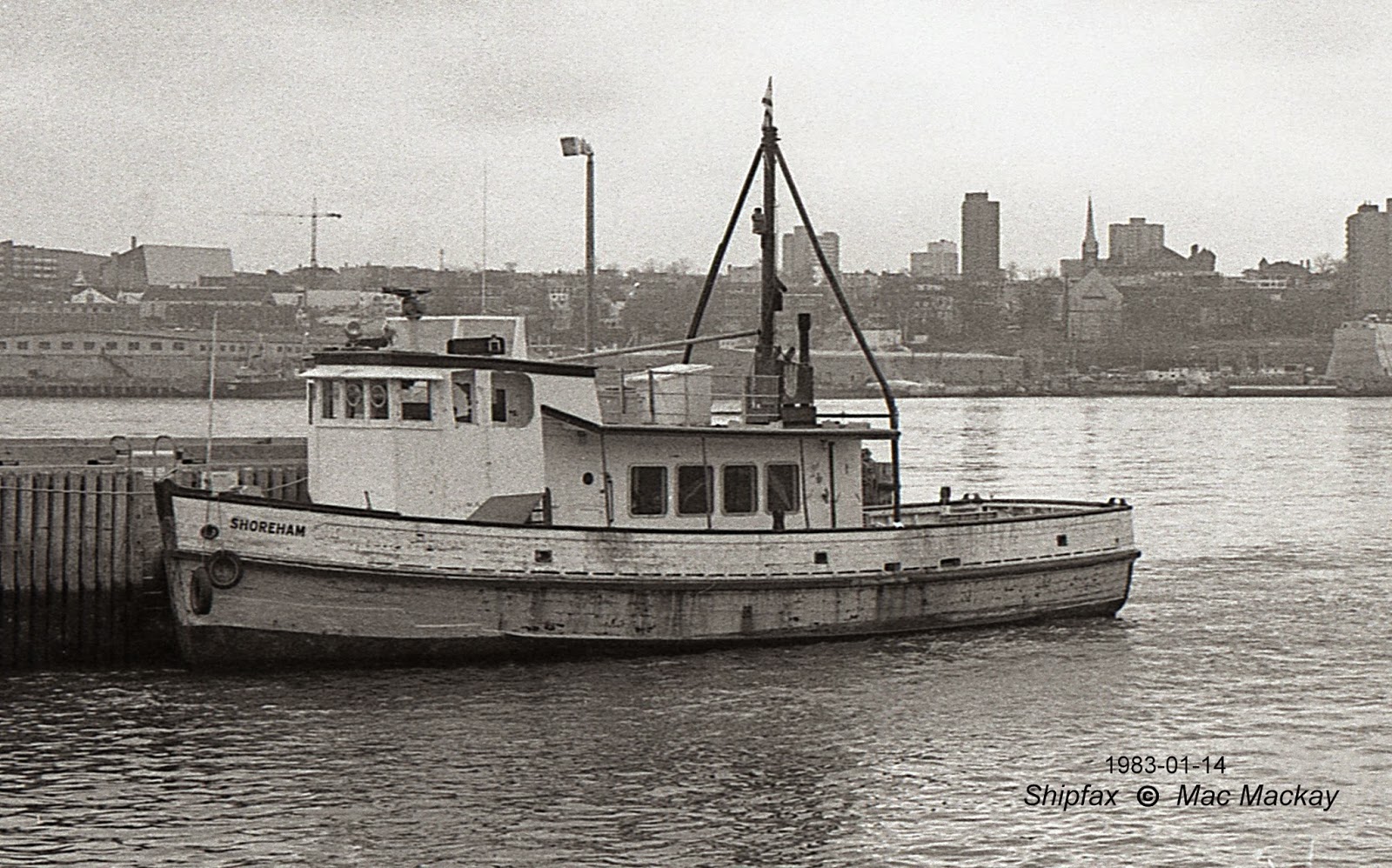 Shoreham was built of wood and had a derrick mounted over its open after deck. 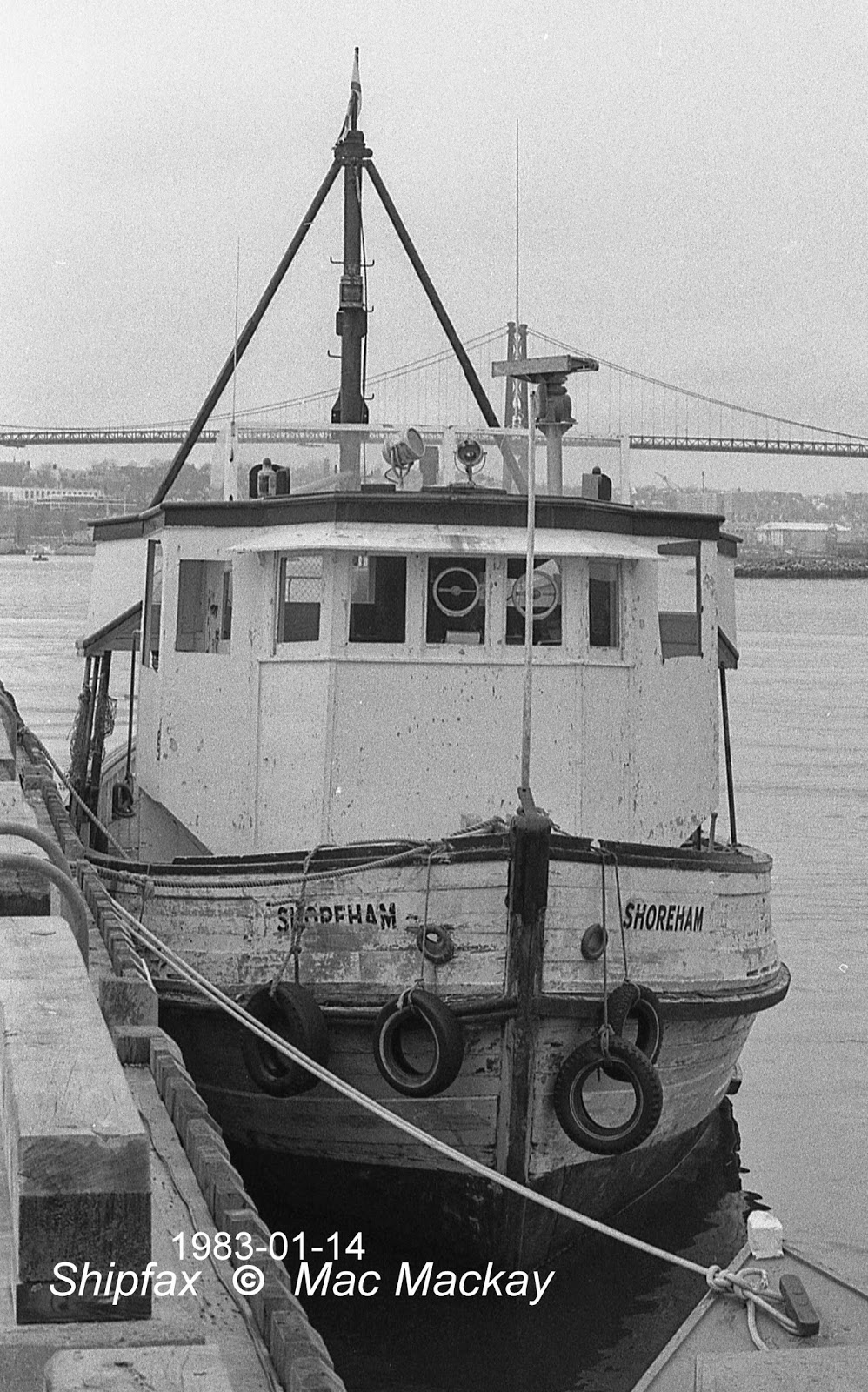 It had semi-enclosed bridge wings, and had bench seats in the forecastle below deck forward, usually the domain of school kids. 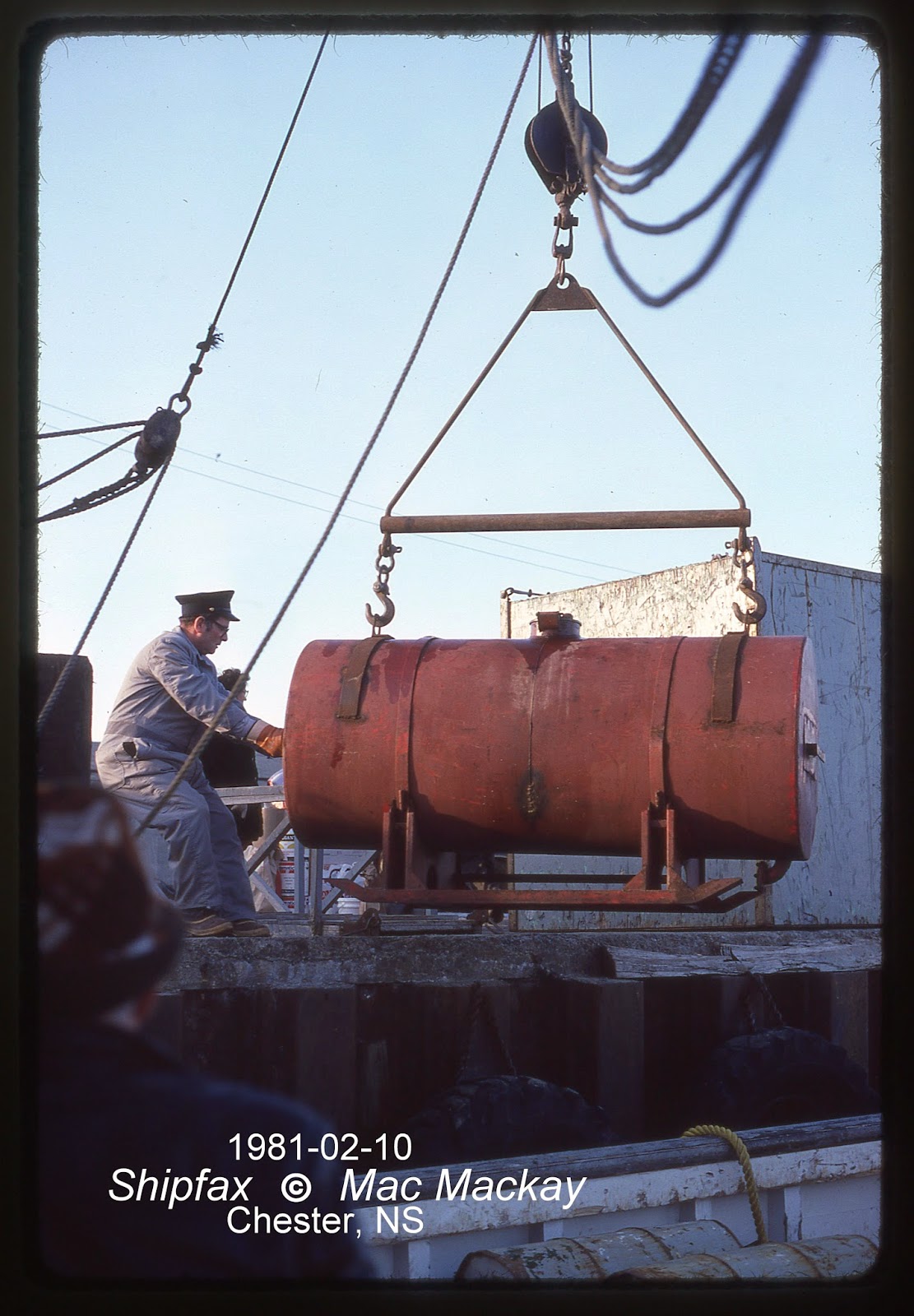 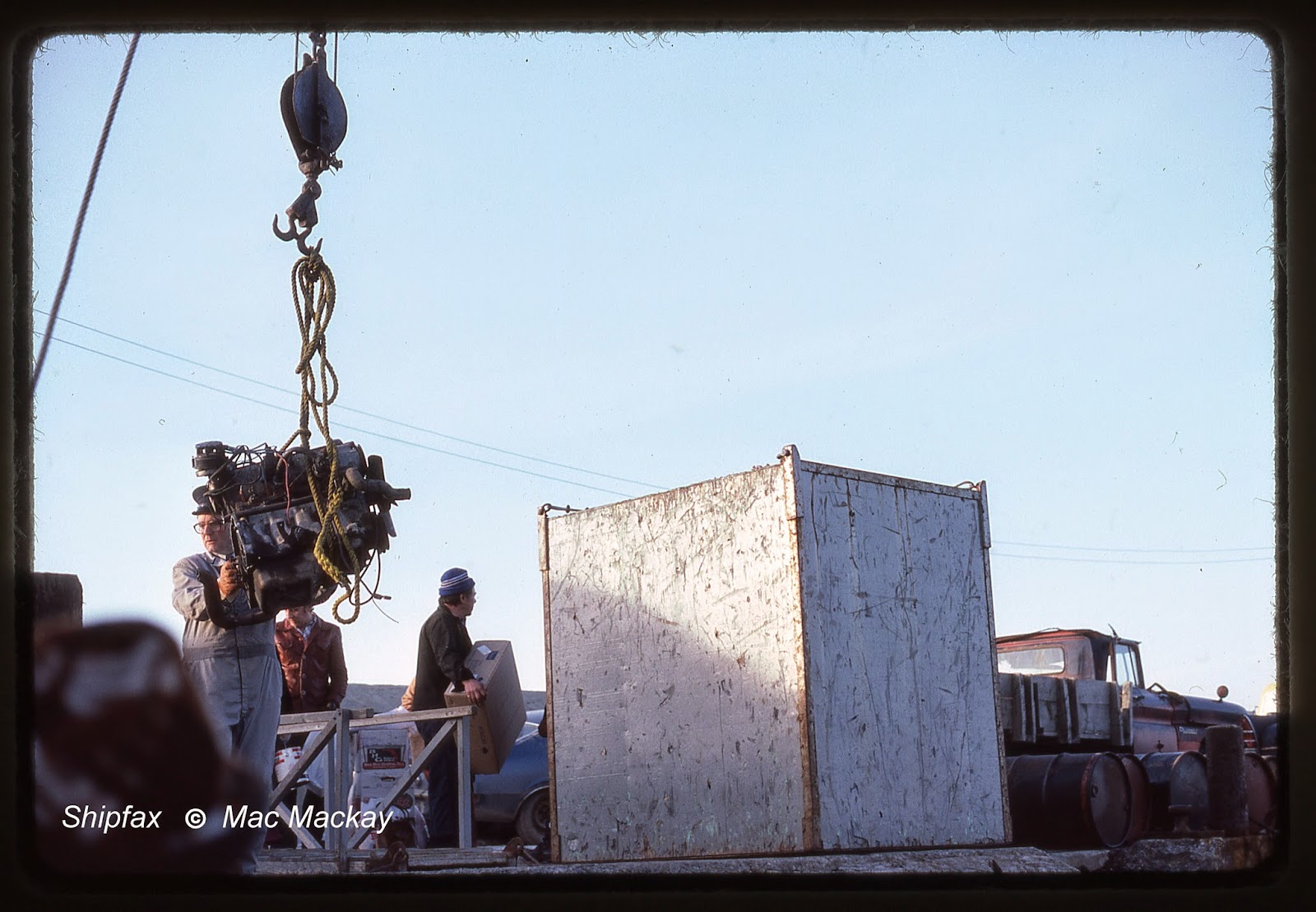 All sorts of cargo made its way to the island on the ferry. A rudimentary freight container (with plywood walls) was used for miscellaneous unaccompanied or carry on cargo such as groceries.

Shoreham moved to Halifax in 1982 where it became a harbour tour boat, but was also used to transport shipyard workers out to oil rigs that were spudded down for repairs. Its derrick was removed and a sun deck built out over the after deck.The sporty funnel and Coke machine were late additions. 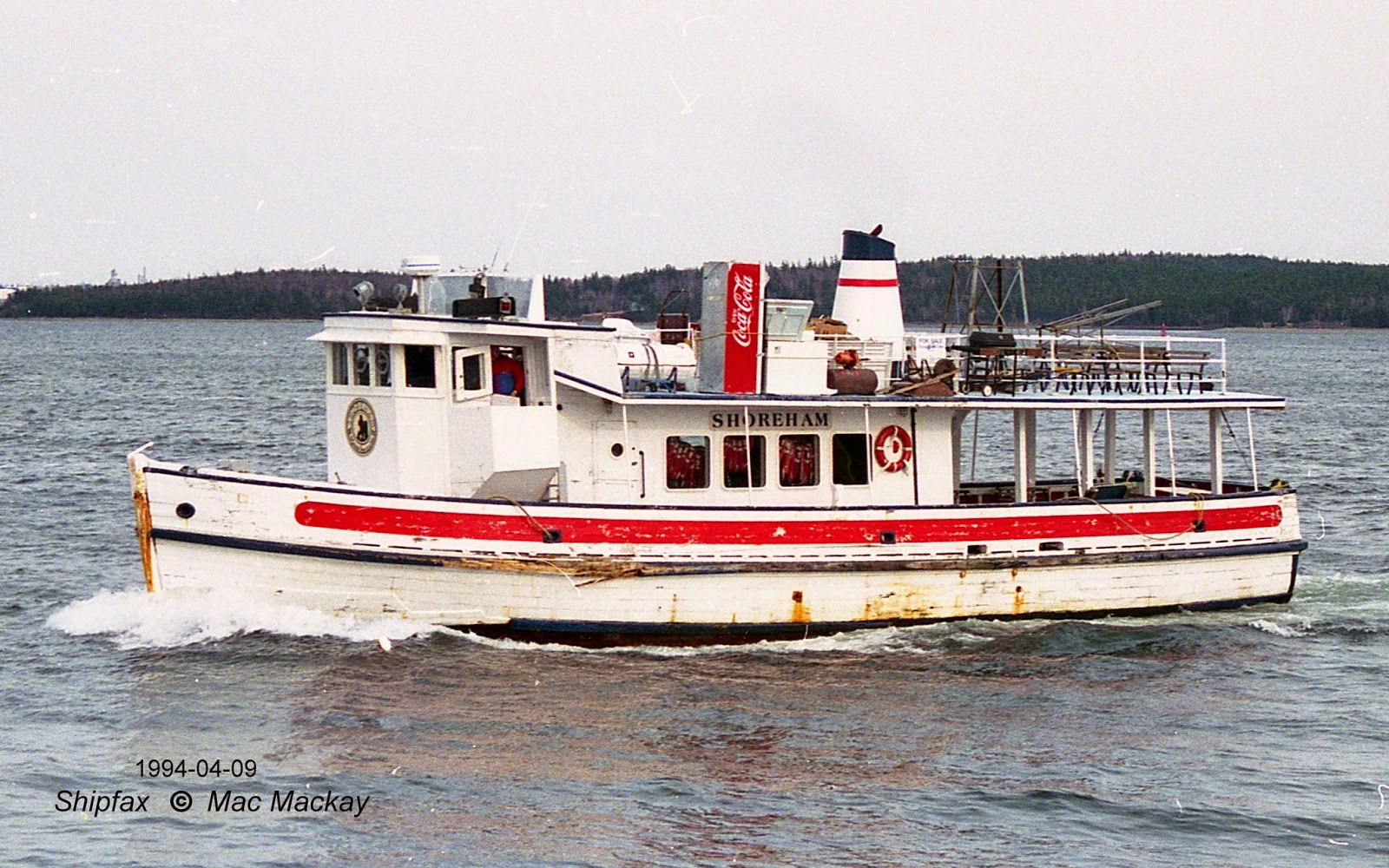 In its last years, the boat was getting banged up and was retired in the late 1990s. Its registry was suspended in 2008.

In 1987 while William G. Ernst was in refit at Snyder's Shipyard in Dayspring, NS, it was replaced by a quaint little tug and RoRo scow. There are vehicles on Tancook, where there are few actual roads, and the vehicles are not licensed. Once on the island they rarely leave again. 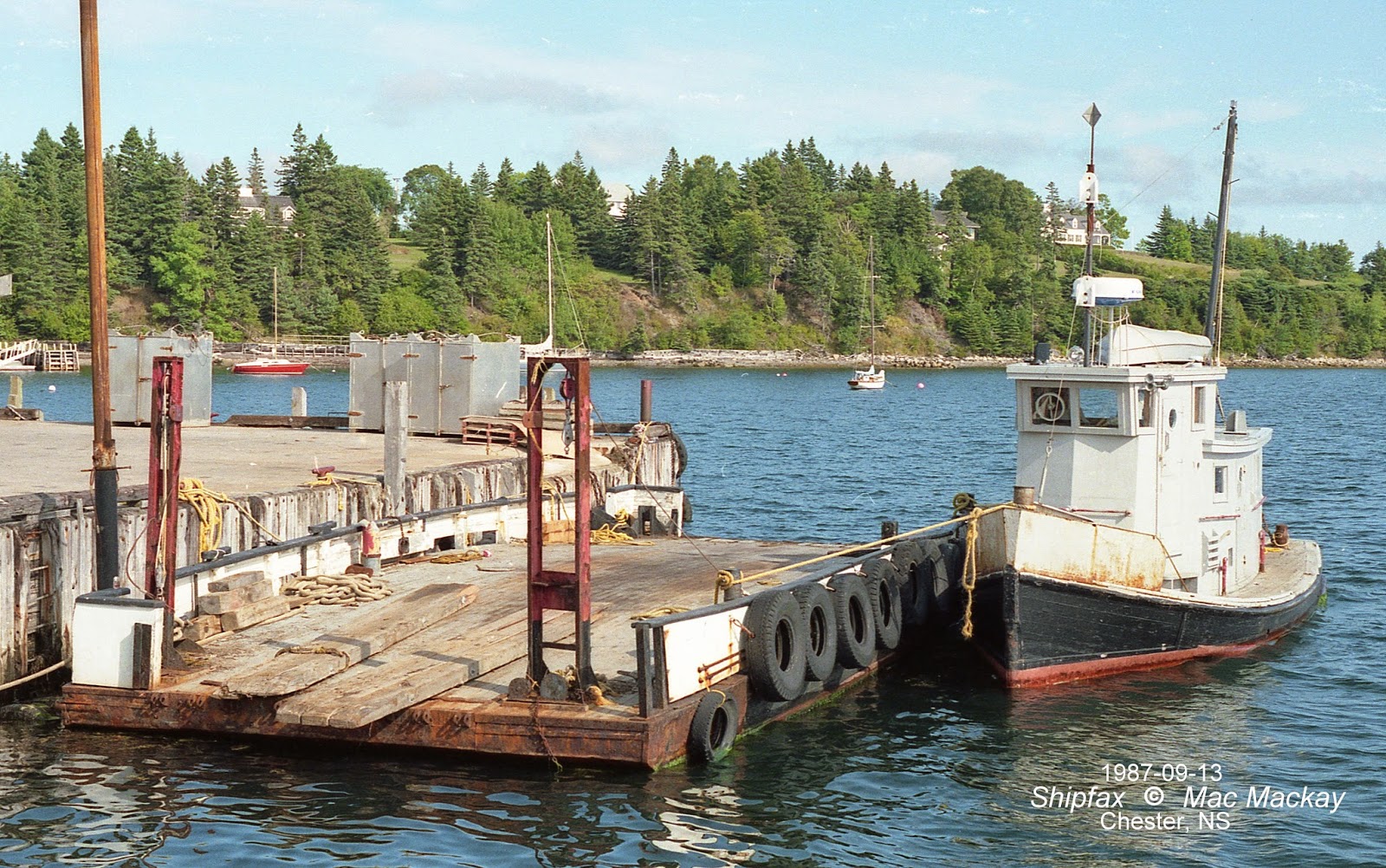 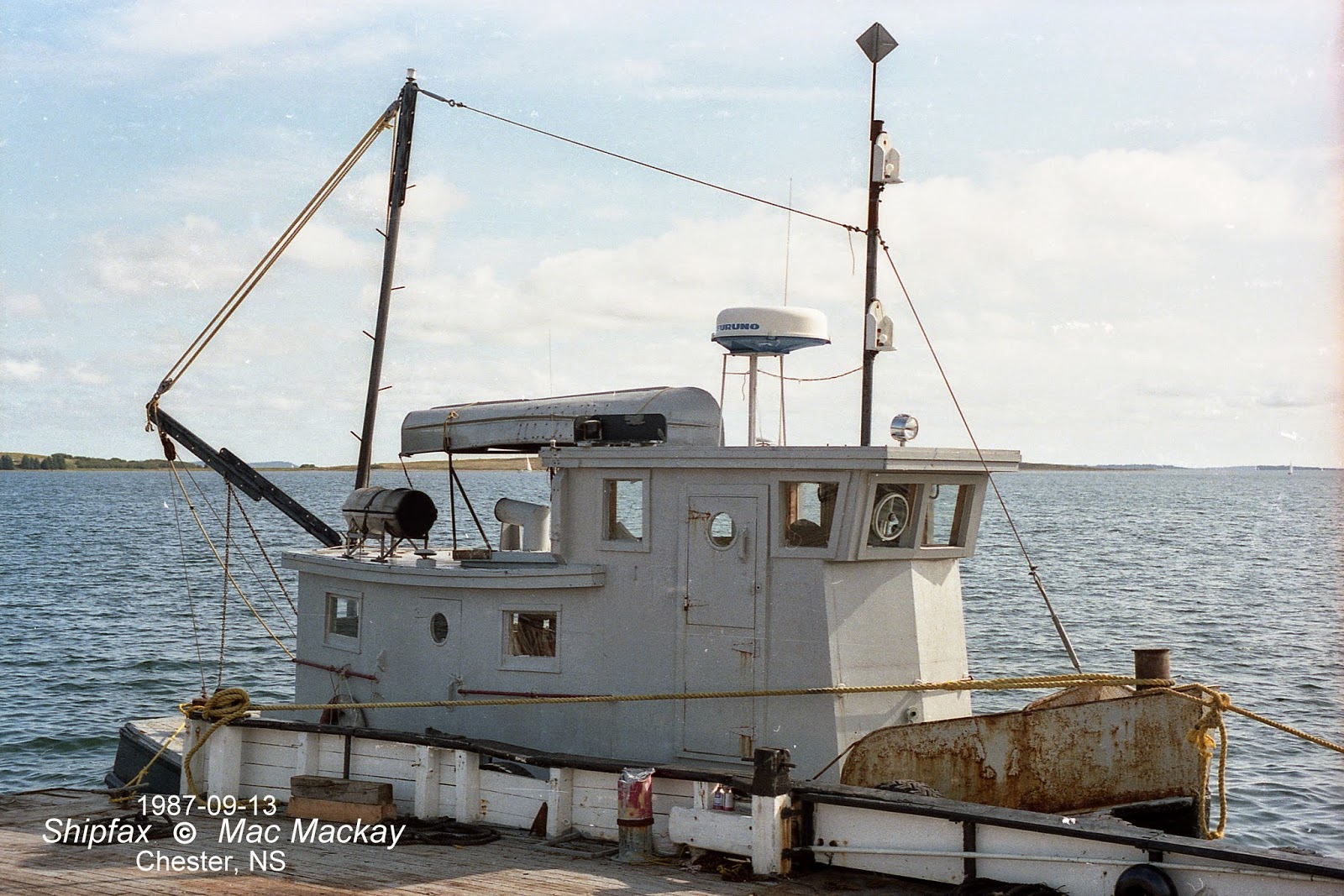 The unnamed tug had some passenger accommodation in the deck house.
(It may be the T.I.Service, predecessor to Shoreham and built in 1944.)


During its current layup for repairs, there is no such vessel available and William G. Ernst is being replaced by the Lunenburg whale tour boat Eastern Points. 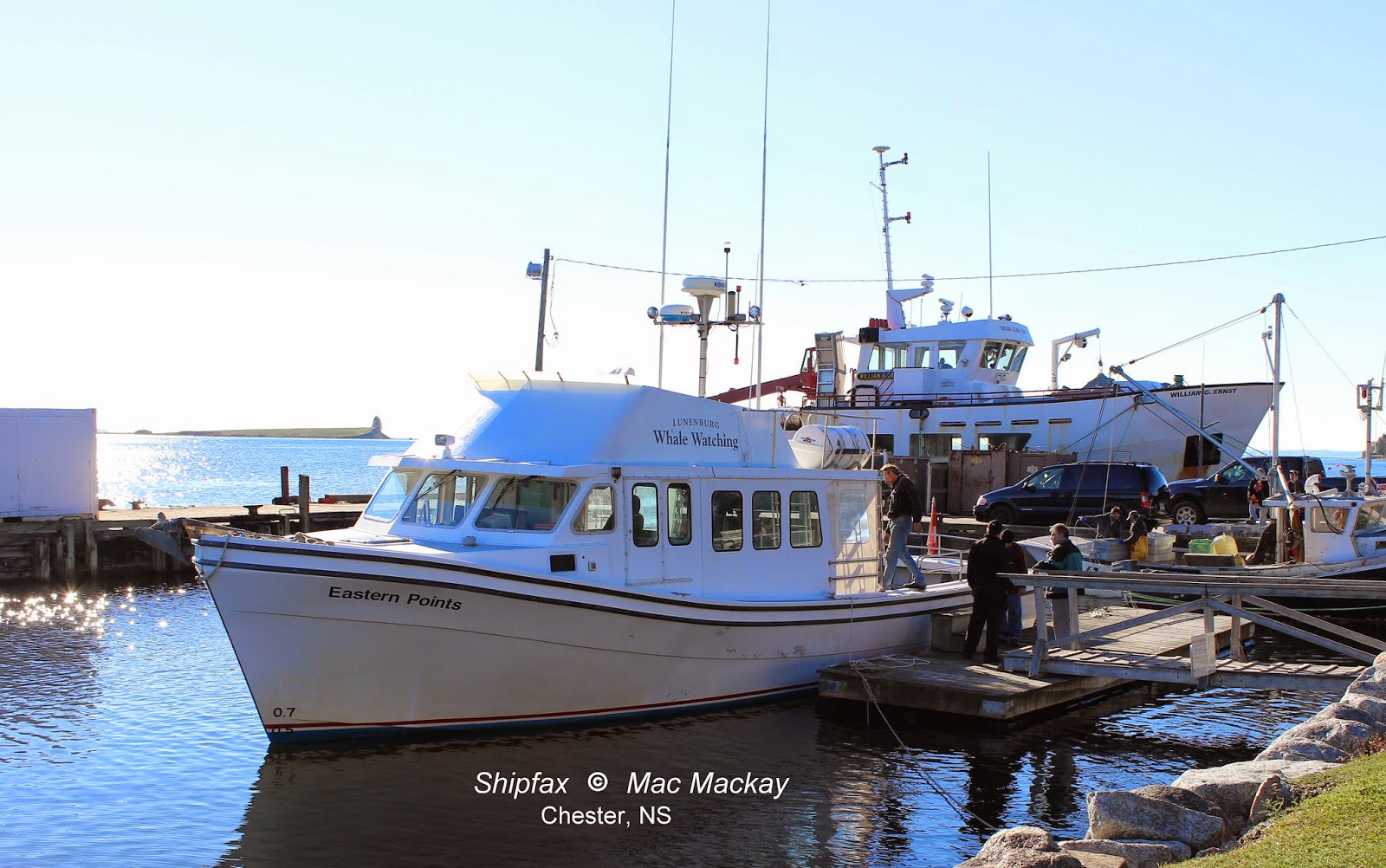 Built in 2002 by Provincial Boat + Marine of Kensington, PE, Eastern Points ties up at a rickety floating stage adjacent to the ferry wharf. Boarding is by means of portable wooden steps. One  passenger for the 10:30 crossing this morning got his leg caught between the two floating sections, but luckily escaped a broken ankle or worse when the crew ran to one end allowing him to extricate himself. 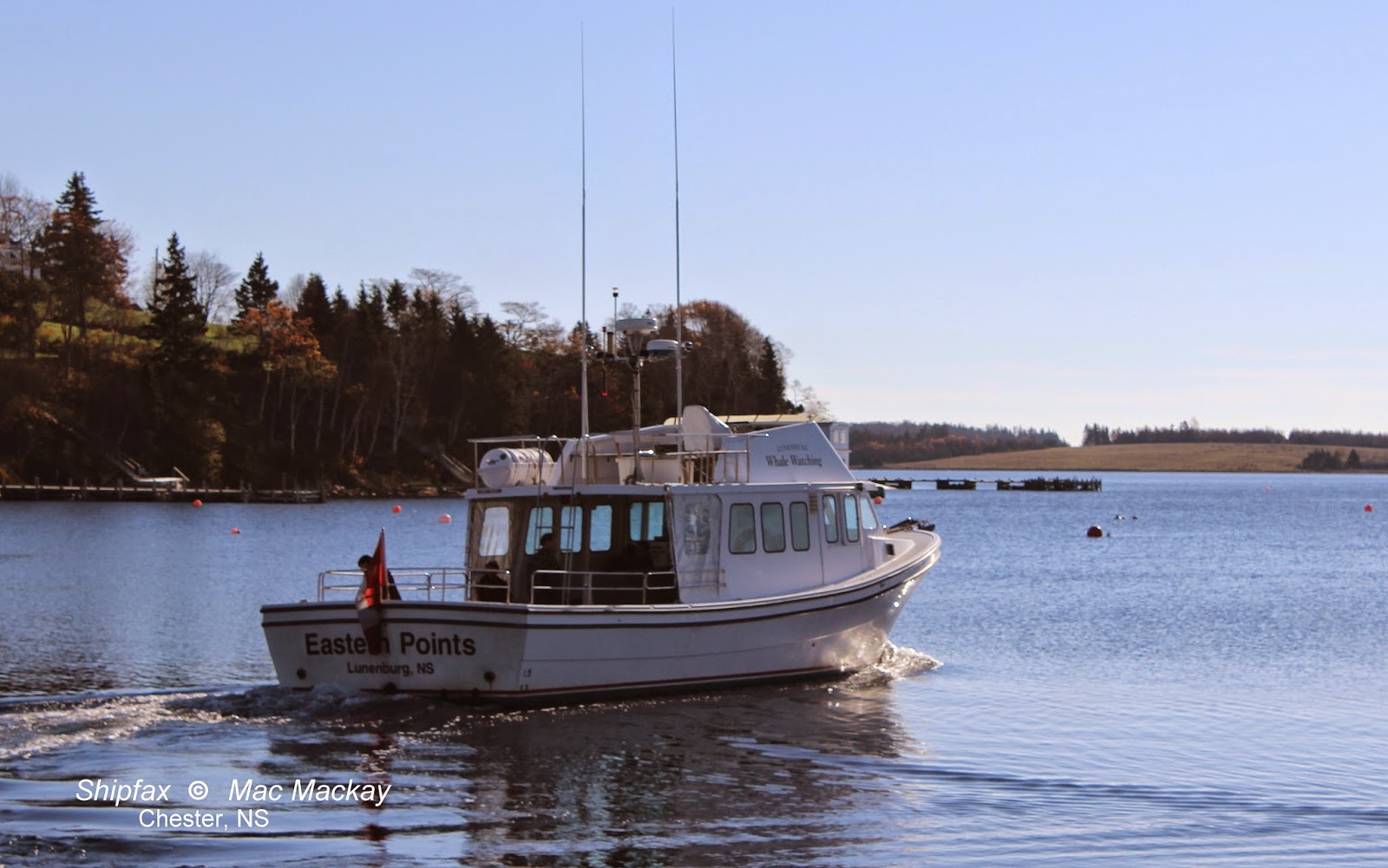 Passengers complain that the deckhouse is open to the elements.

While Eastern Points is a fine boat by any standard it does not have many of the capabilities of the Ernst (when it is working). 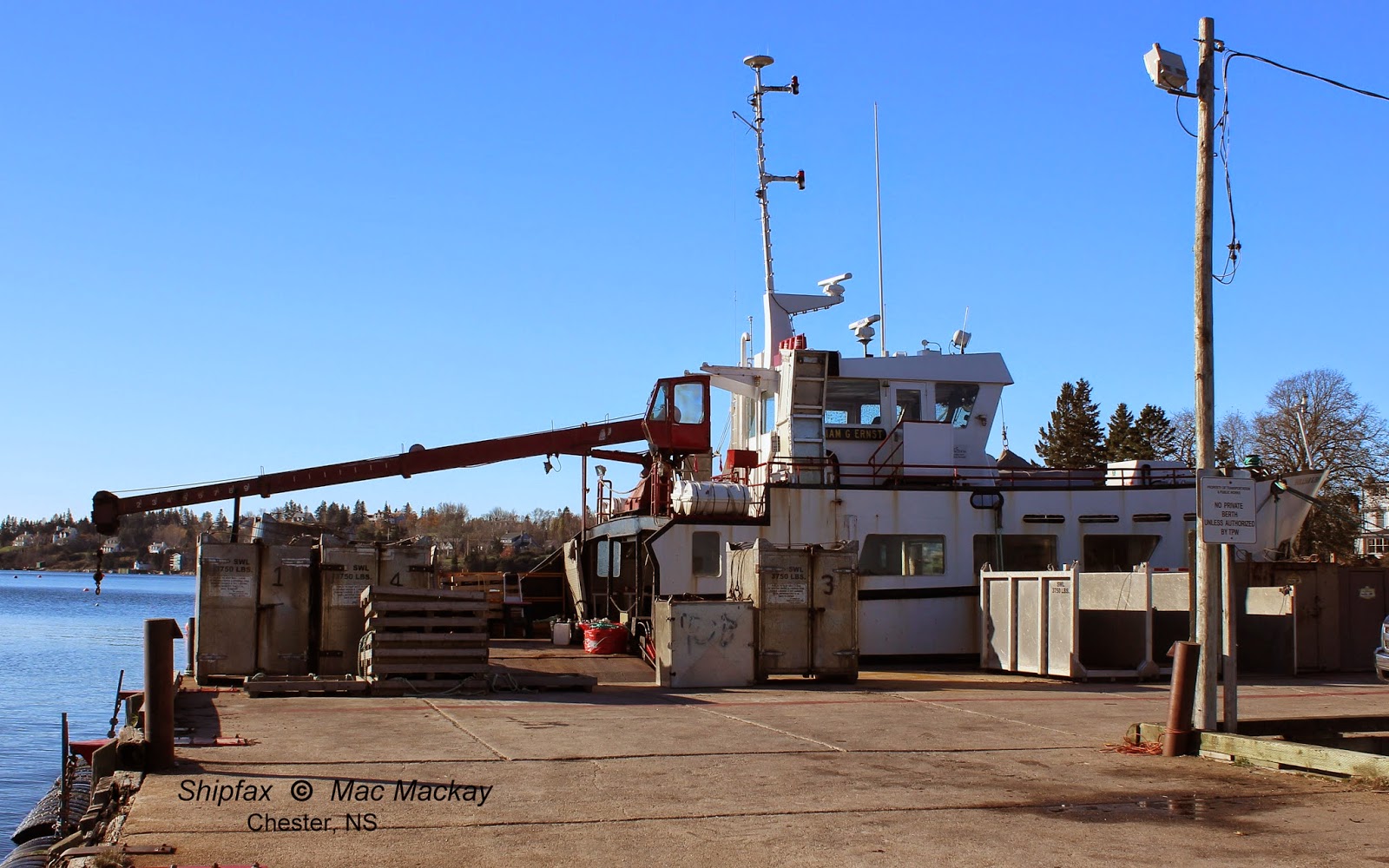 The Ernst can carry a variety of aluminum freight containers or other cargo, which is craned on and off. 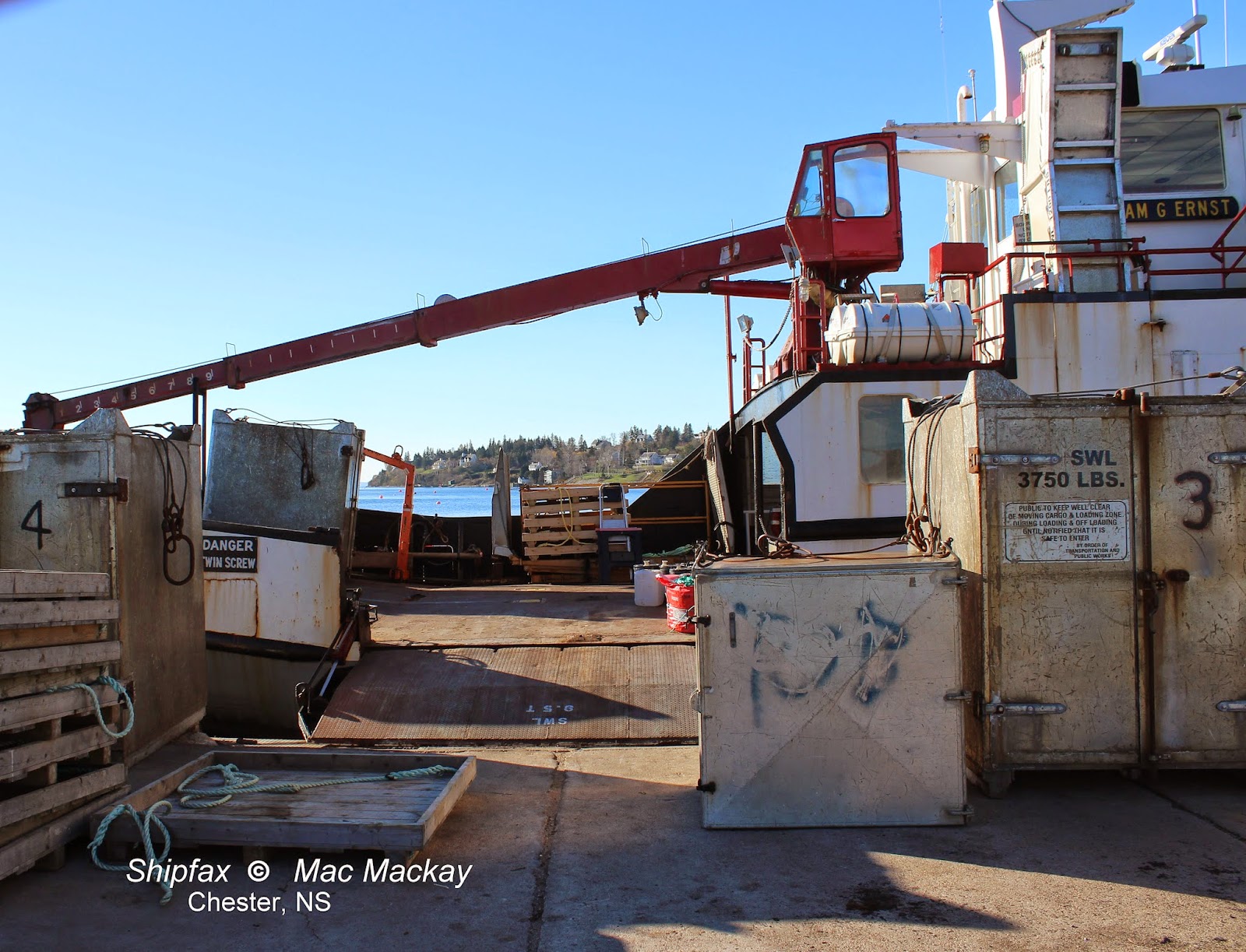 It also has a starboard side RoRo ramp and a high level gangway which is necessary at Tancook. Passengers now have to climb a vertical ladder.

Calls for a new ferry are probably reasonable, particularly if the stability issue is not resolved. The Province is certainly not making money on fares, so whatever the cost, the taxpayers at large will be subsidizing any operation. 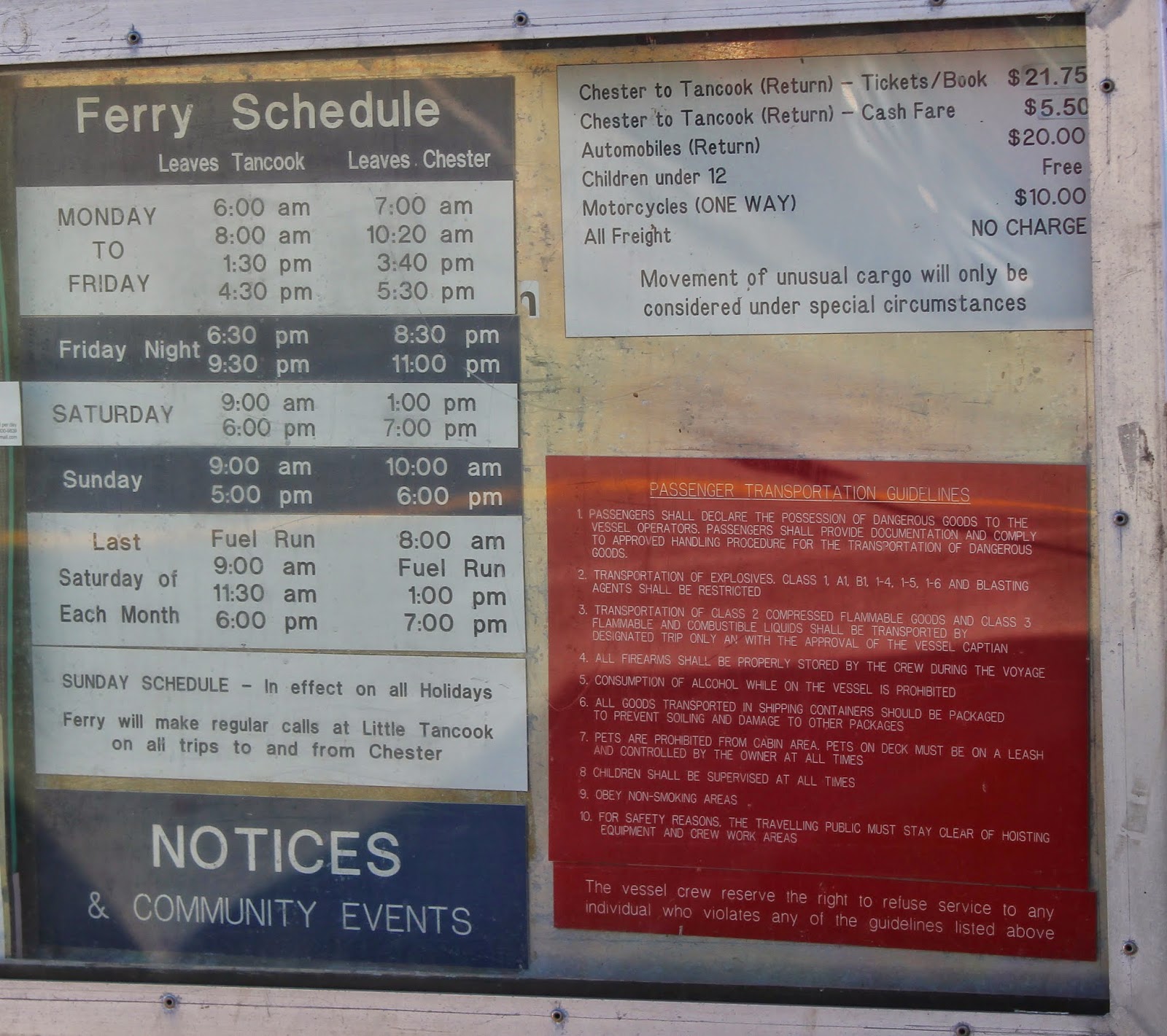