There are many war memorials in Halifax, recognizing the sacrifices of the many soldiers, sailors and air forces during both World Wars, the Korean War and subsequent hostilities. Most were heavily attended on November 11 and fitting tributes were paid by veterans and the citizenry at large. Most were well covered by the press and images were widely available.
But there is also one memorial that received little attention. 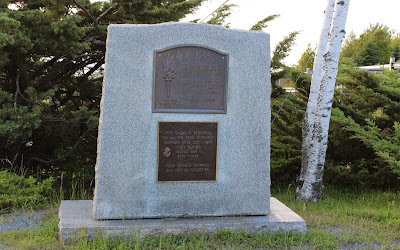 At the side of a parking lot opposite the main gate of the Imperial Oil refinery on Pleasant Street in the Woodside neighbourhood of Dartmouth stands a small granite block. It carries two plaques, one for refinery employees who died in World War II after joining the military. 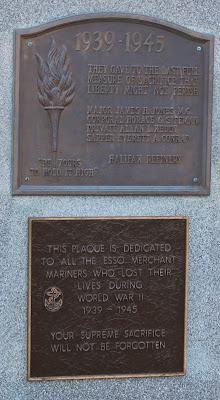 The other remembers those who were lost while serving on Esso tankers. Imperial Oil had a large fleet during World War II, and for a time managed fourteen more ships under the Panamanian flag until the United States joined the war. Some ships were lost, many took part in convoy gun battles and some were captured and the crews taken prisoner.
I do not know how many Esso sailors were lost during that conflict, but they are remembered.