The review of the Canadian Coast Guard in 1984 continues.

Not just a big boat operator, the Canadian Coast Guard had numerous small craft too. So many in fact that it would be a monumental task to winkle out the names and fates of all of them. The new book Canadian Coast Guard 1962-2012 does a pretty fair job: http://longhillpublishing.ca/

Here is a sampling: 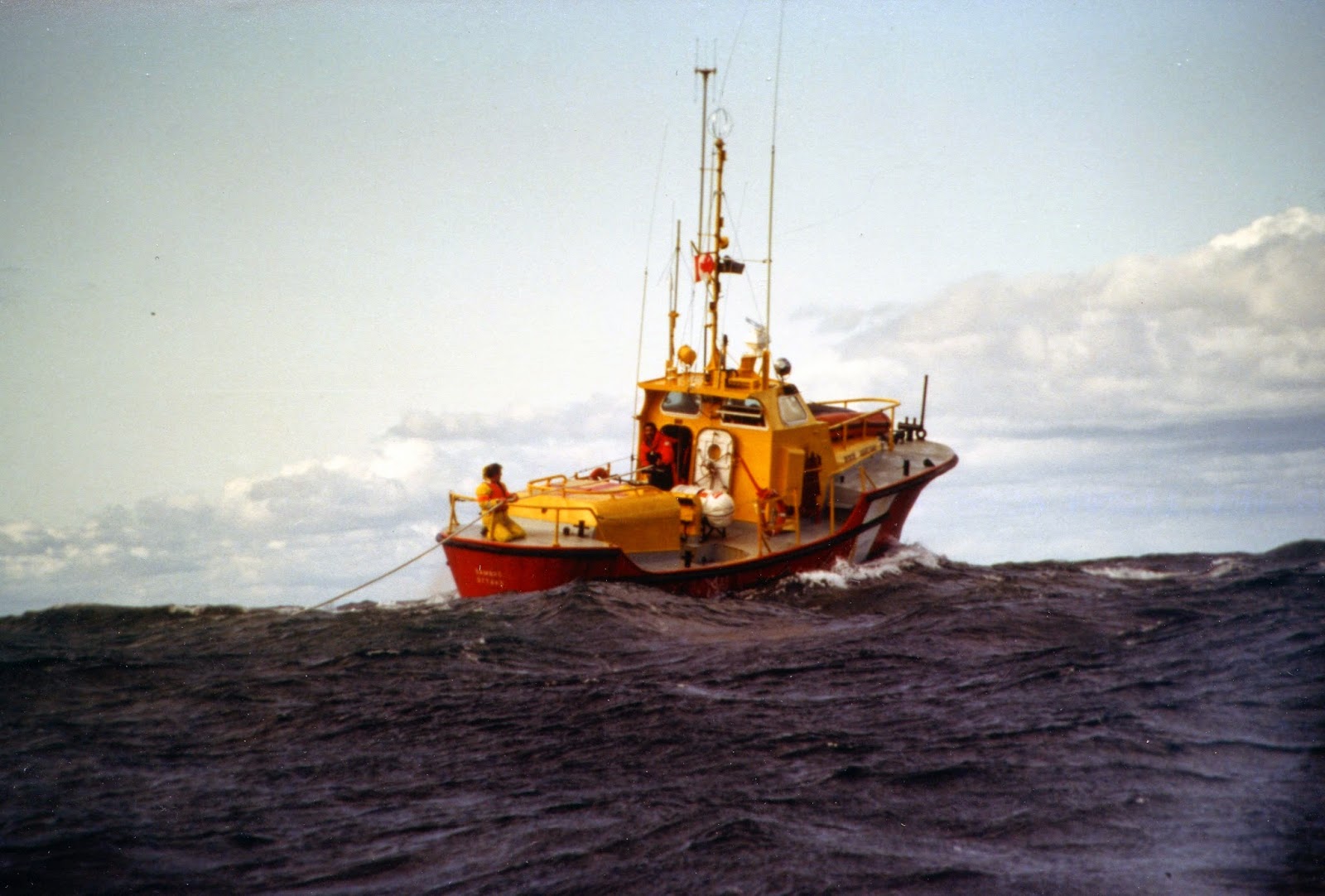 The 44 ft self-righting lifeboats were built to the U.S.Coast Guard design. In fact the first one, CG 101 was built by the USCG at its Curtis Bay, MD facility in 1969, and stationed at Clark's Harbour, NS. Another SAR station was established at Sambro, at the mouth of Halifax harbour and the boat stationed there also covered SAR calls in Halifax harbour as well as offshore. 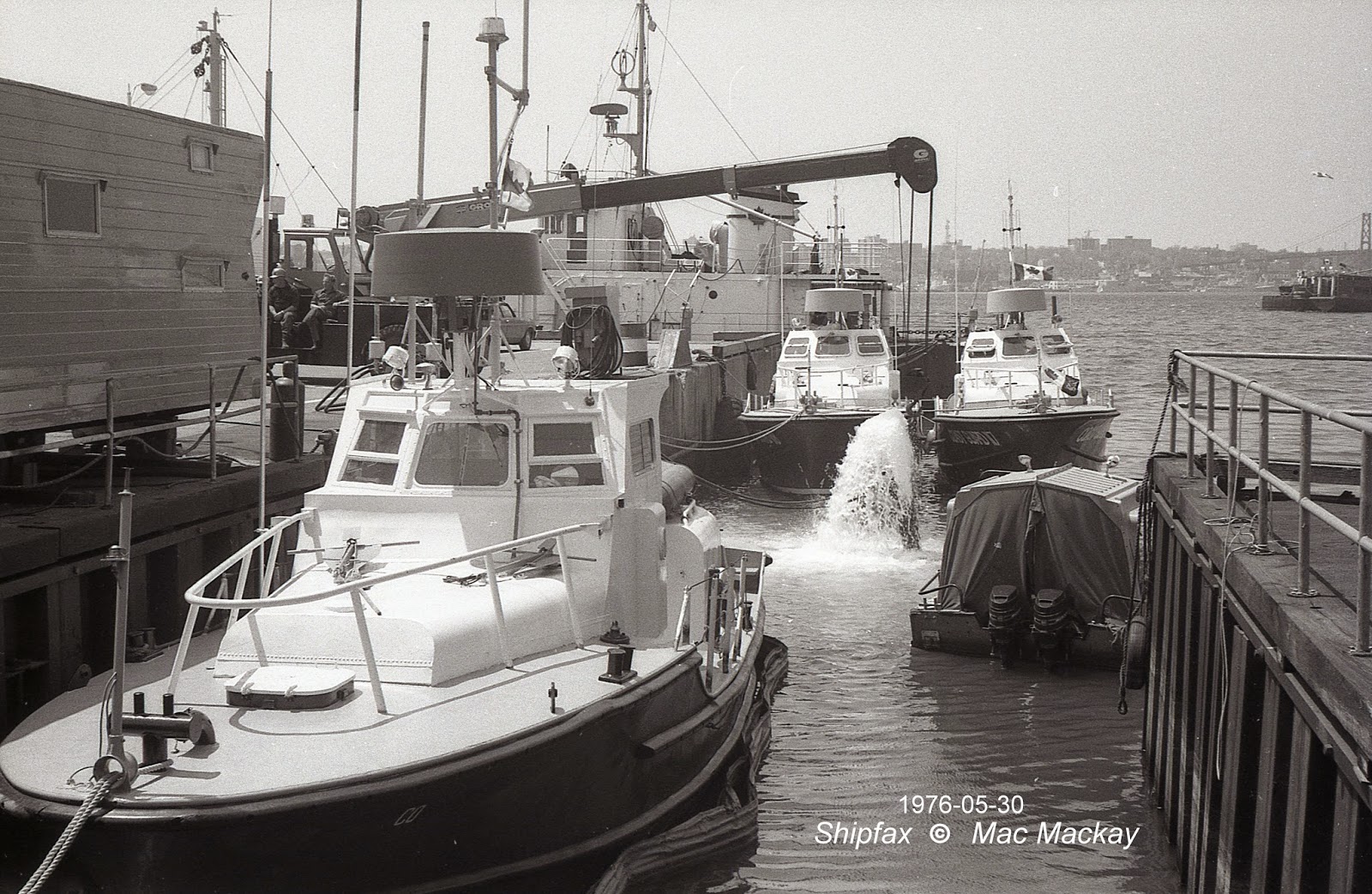 An unknown boat in the foreground, and CG 117 and CG 118 in the background at the Dartmouth base for maintenance. 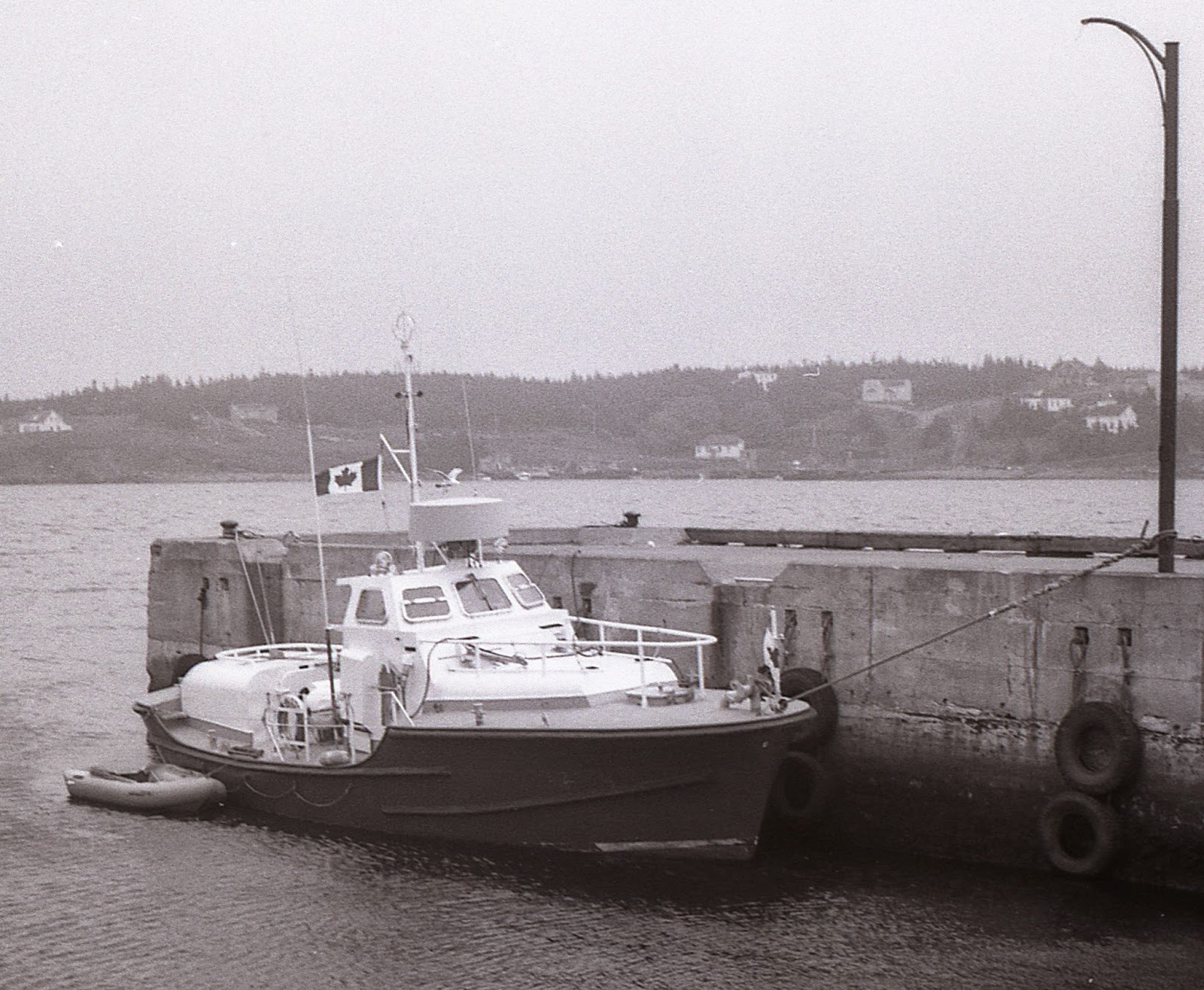 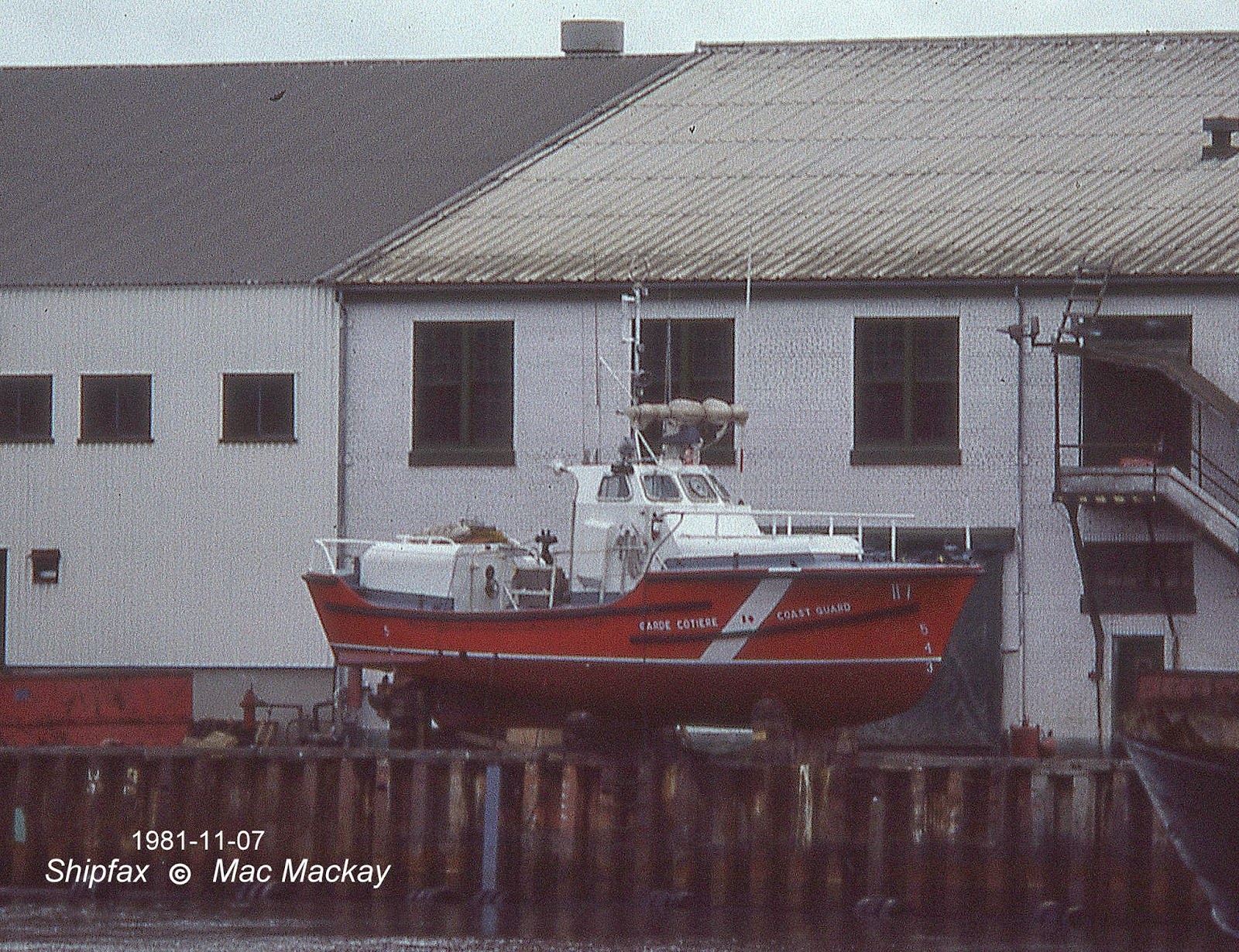 CG 117 at Dartmouth Marine Slips. It was also built by Eastern Equipment in 1975. 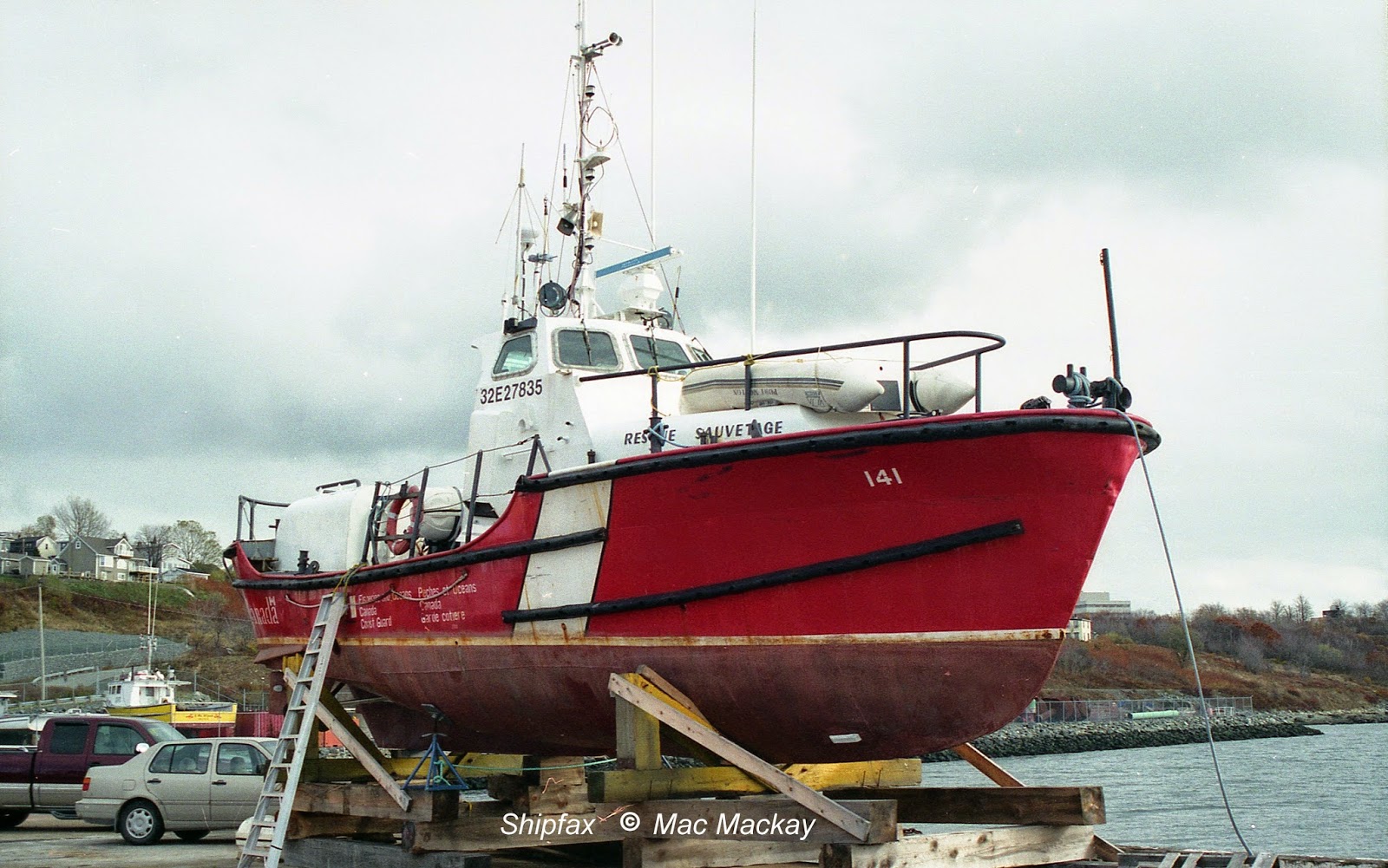 The boats were all numbered, but took on the names of their stations. Boats based in Sambro, Port Bickerton, Louisbourg, and Port Mouton were seen in Halifax from time to time. They swapped the boats around during maintenance periods, and even between regions.
Known as Type 300 they were retired over time up until about 2004. Some served as training vessels at the Coast Guard College in Point Edward, NS in their later years.

Type 400 boats were built for the Western and Central and Laurentian Regions by Breton Industrial +Marine of Point Tupper (Port Hawksbury), NS in two batches. The first was built in 1980.
CG123 was sent to the west coast and renamed Point Henry It was put up for sale as 2011-05, and new owners renamed it Point Henry. 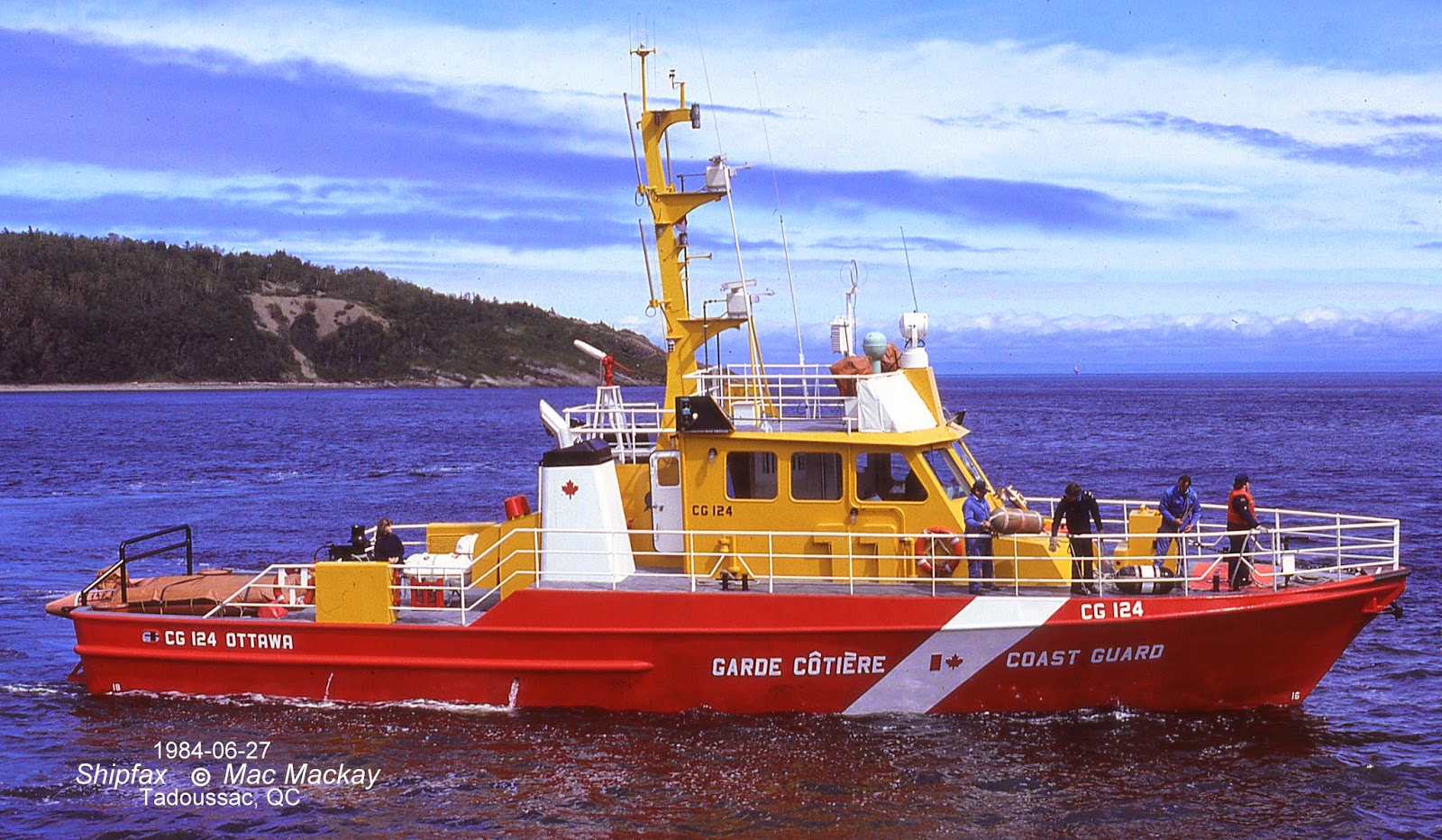 The first of the second batch was built in 1982. 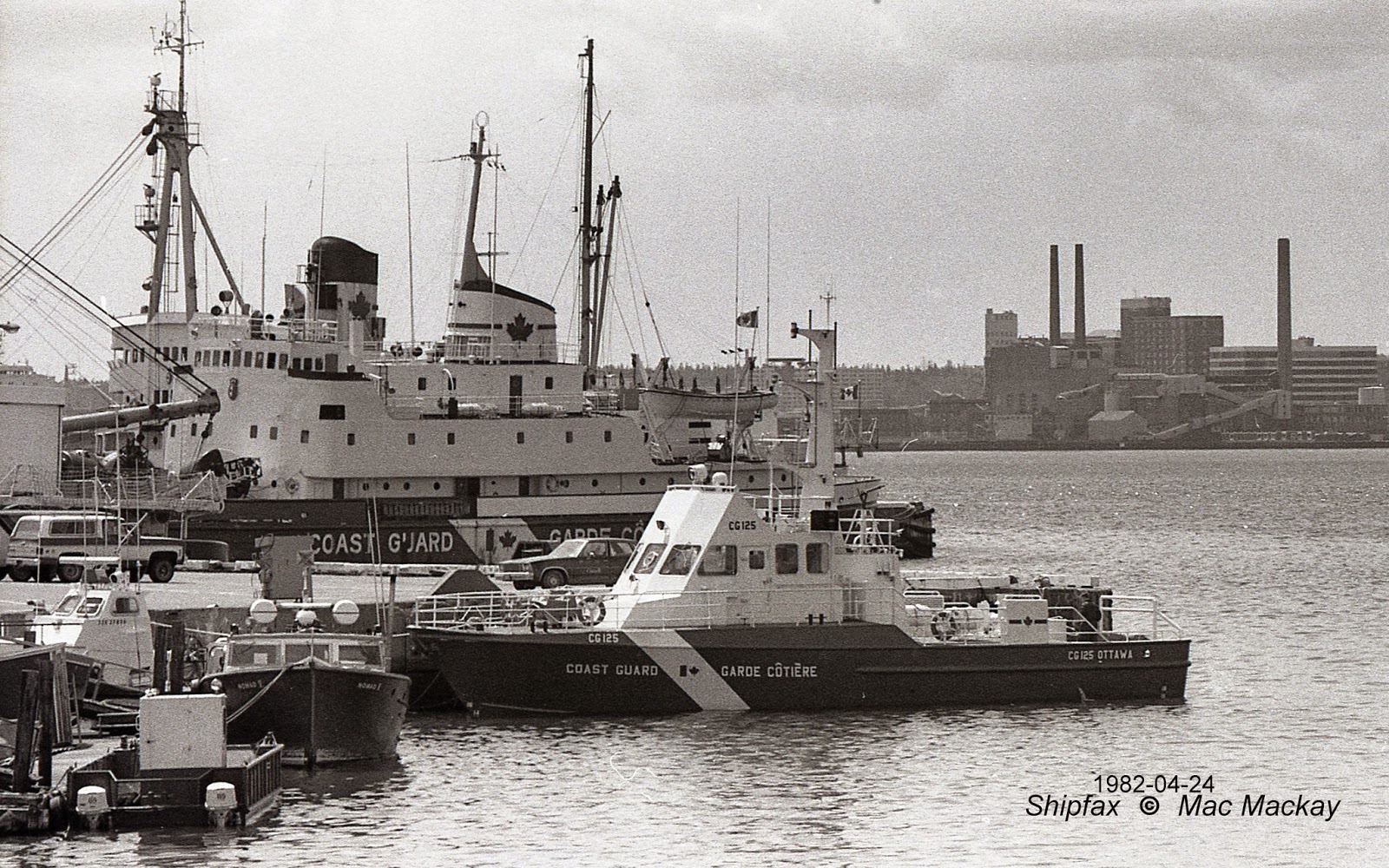 CG 126 was renamed Cape Hurd and was put up for sale this year as 2014-01. It was recently acquired by the City of Toronto and was reported in the Welland Canal just last week, headed for its new home.

Well suited for work in shallow water and mud flats, ACVs were also found to be useful for breaking sheet ice. They were ideally suited for areas of the St.Lawrence and CH-CGA  could be seen far downstream. There was a permanent landing ramp at Gros Cacouna, and there may have been others. They were particularly useful in areas where tides (up to 20 feet) left vast stretches of mud flats, making shore navigation markers impossible to reach at times.

Built in 1972 at Grand Bend. ON, the Bell Voyageur was also known simply as Voyageur since it was the only one of its type to serve with the CCG. 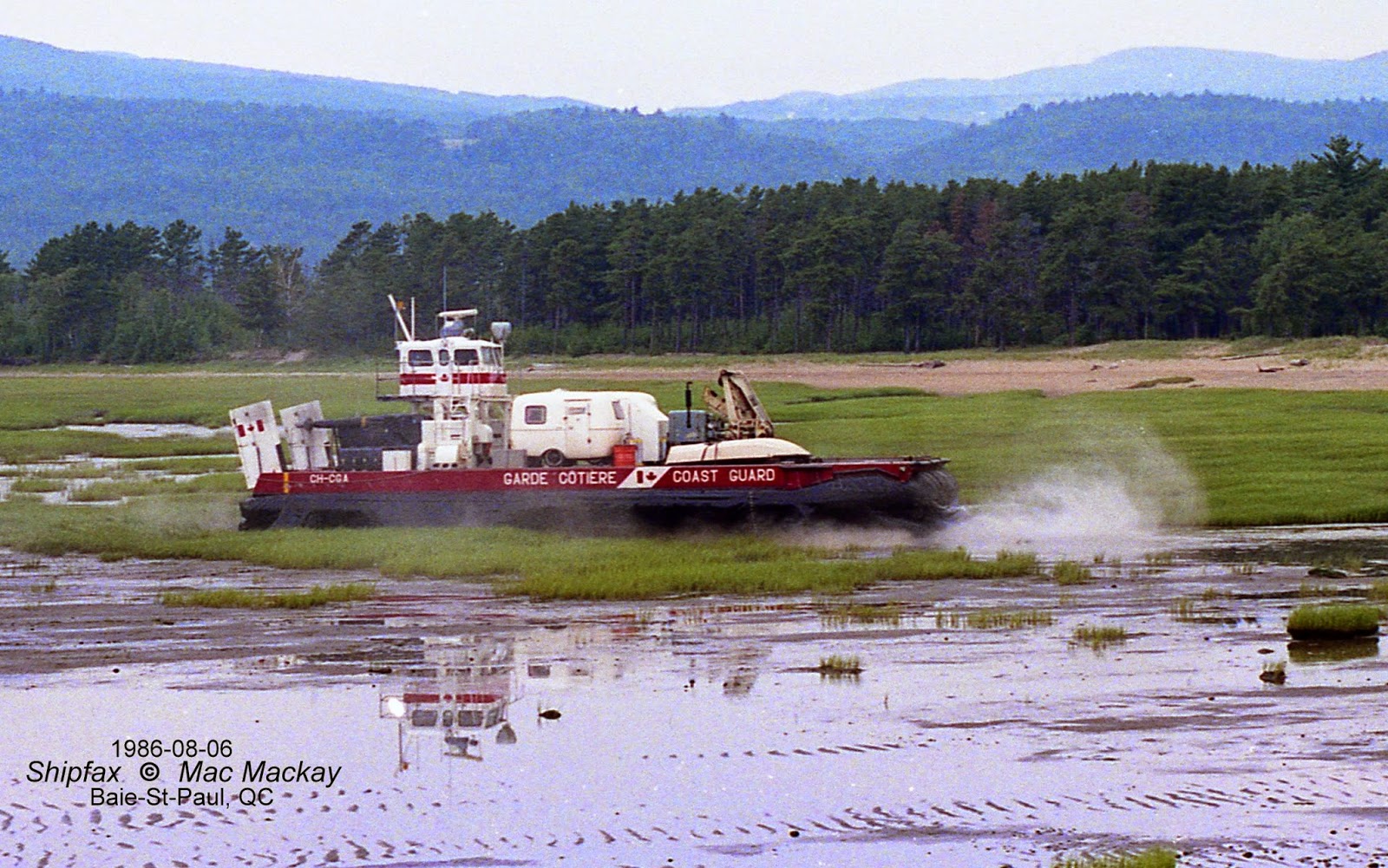 CH-CGA thunders across the flats at Baie St.Paul where the tidal range exceeds 15 feet.

Once on the beach, the apron "deflates" because the air cushion weeps out when the fans are stopped. A Boler travel trailer provides rudimentary accommodation for the crew. a slightly larger trailer appeared in later years.

The CCG expanded its ACV fleet after Voyageur was retired in 1987. Later units got rid of the costly gas turbine engines and went with diesels, and permanent bases were established at Sea Island, BC and Trois-Rivières, QC.