Crude tanker and bulker for a change

Accustomed as we have become to product tankers, multi-purpose general cargo ships and container ships in Halifax, it was a bit of a break today to see a crude oil tanker and a bulk carrier arrive.

First in was the crude carrier Eagle Stealth (ex Nord Stealth-07), anchoring for bunkers. (It is hard to believe that a ship of this size could act with any stealth.)

Eagle Stealth occupies most of number one anchorage, while Oceanex Sanderling works at Autoport. 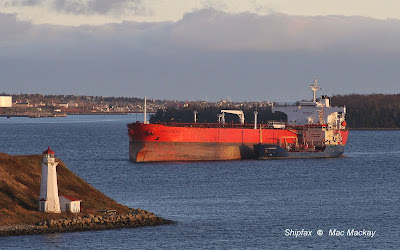 Dating from 2001 the Aframax size Eagle Stealth was built by Sumitomo Heavy Industries in Oppama, Japan. It measures 56,346 grt and 105, 322 dwt (the owners claim only about 99,000 summer deadweight). It is operated by AET Tankers Pte. Ltd of Singapore and is registered in the Marshall Islands.
AET currently operates 12 VLCCs, 4 Suezmax, 2 DP Shuttle, 48 Aframax, 1 Panamax, and 1 CPP crude tankers. The company has an interesting 20 year history, see: http://www.aet-tankers.com/


The laden bulk carrier Nordic Visby arrived this afternoon and tied up at pier 30-31.

It was built by Nantong, Jinhua in Nantong, China in 2012 as SJN Nordic for Nordic Hamburg Ship Management. It was renamed in 2012 for the same owners, and flies the Isle of Man flag. At 22,409 grt, 35,022 dwt it is considered to be handy sized. It carries four 30 tonne cranes and frames for carrying deck loads, such as timber.Nordic Hamburg currently operates ten bulk carriers of similar size and ten container ships of various sizes for a variety of small owners: http://www.nordic-hamburg.de/index.php/en/nhs.html
As soon as it had completed fueling Eagle Stealth, the bunkering tanker Algoma Dartmouth moved over to Nordic Visby.