No wall in Halifax

Today marks the twenty-five anniversary of the demolition of the Berlin Wall and the re-unification of Germany after it was partitioned following World War II.
During the Cold War era, when the Berlin Wall symbolically and physically separated east from west, there was a strange truce of sorts on the fishing grounds off Nova Scotia and Newfoundland.
Eastern bloc countries had a huge fishing effort, lead by the USSR, including Latvia and Lithuania, but also with the participation of Poland, East Germany, and even Bulgaria and Rumania. Cuba was also involved. They fished near West German, British, Canadian, American, Spanish and Italian ships and generally avoided conflict. 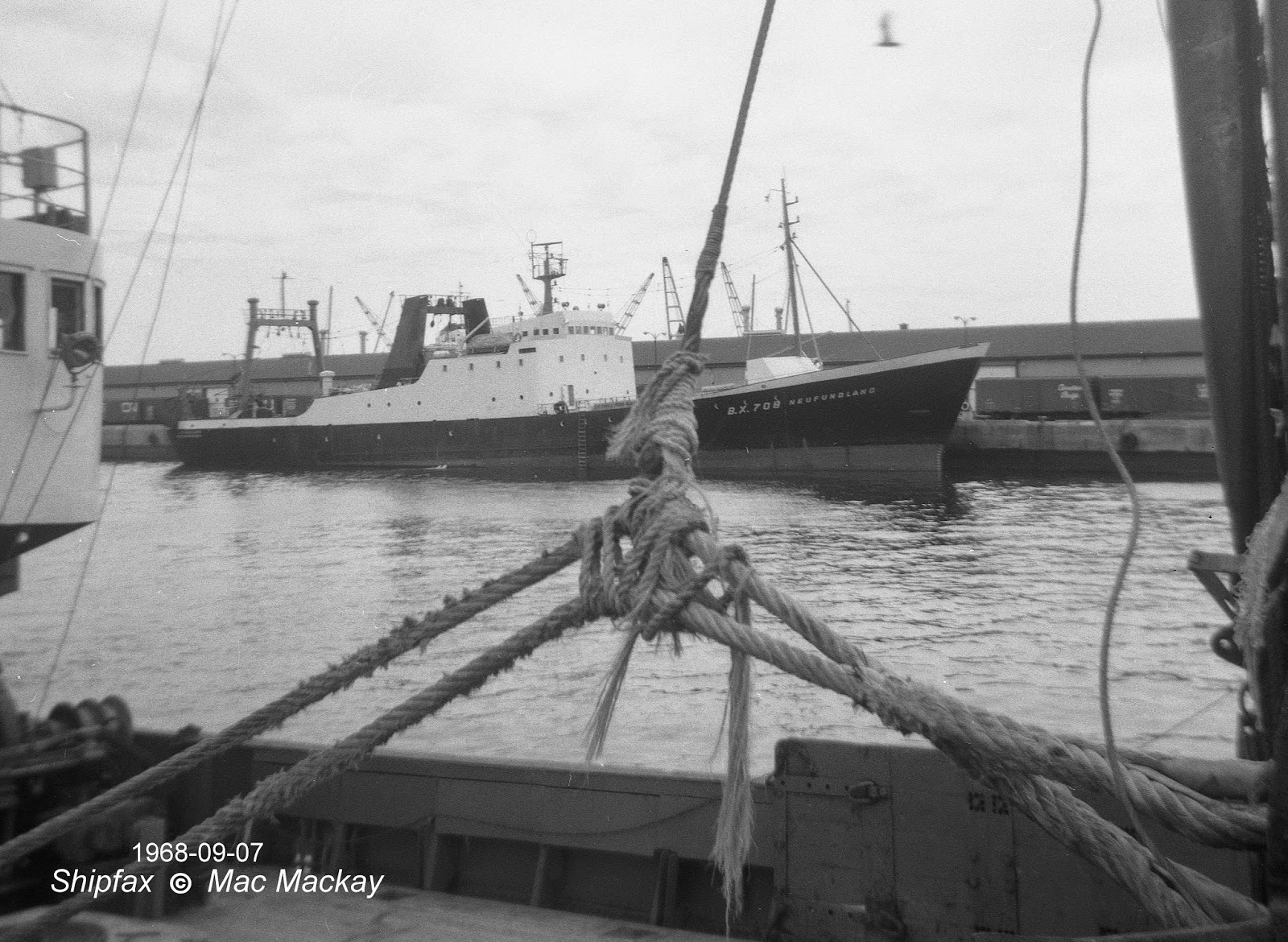 Seen across the deck of a Polish side trawler, the modern West German stern trawler Neufundland lies at pier 30 . Built in 1967 it was renamed Hildesheim in 1970, and sold to Cape Town owners in 1976. Renamed Sacip it was sunk as a naval target off South Africa in 2001. 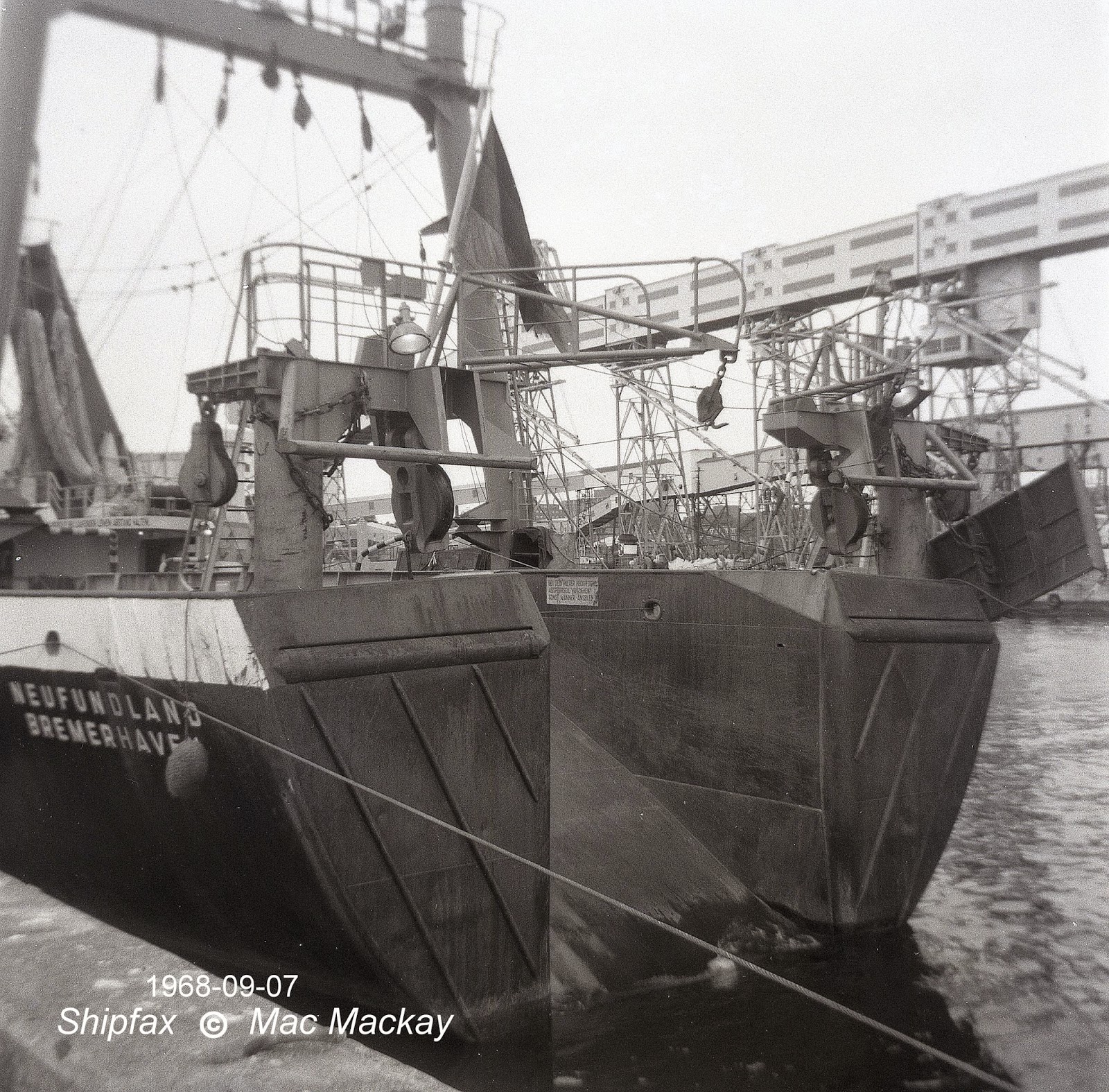 Neufundland fished out of Bremerhaven and carried number BX 108. Its stern ramp was used to haul the fish net aboard in sheltered conditions. It was much safer than the side trawling method.

Halifax and St.John's, as the closest major ports to the fishing grounds, often hosted these ships for repairs, stores and just plain rest and recreation for the crews.
It was not unusual to see East and West German ships berthed close to each other. What interaction there might have been between crews was usually limited by political officers aboard the Russian ships, but these were somewhat less obvious with the Polish and East German vessels.
With Canada gradually increasing its territorial claims from 3 miles, to 12 then to 200 miles offshore, the Eastern Bloc fishing presence diminished over time, but even so the cod stock declined and eventually collapsed. By the late 1980s most of the foreign fleet had gone elsewhere or had been scrapped. 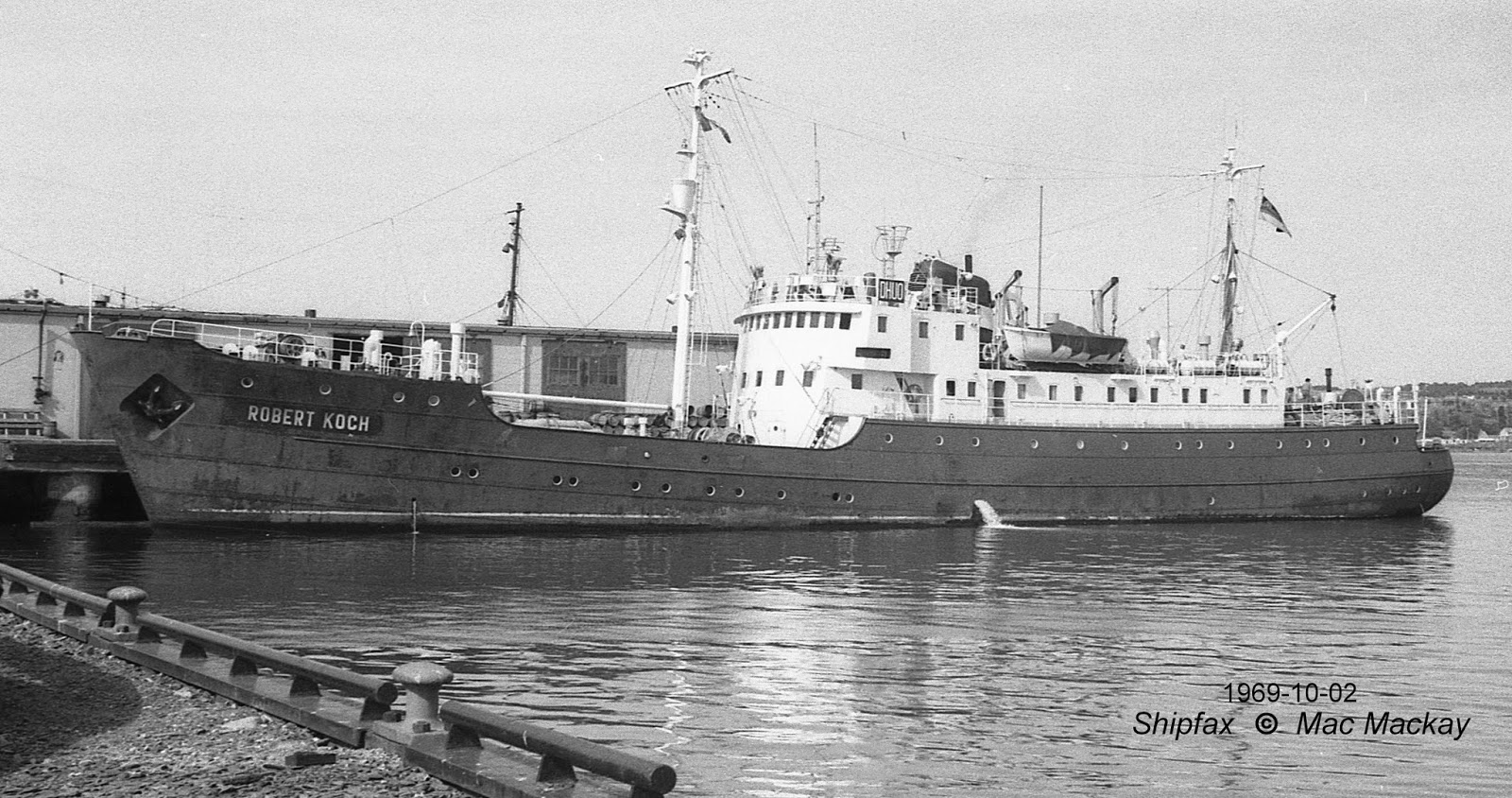 Robert Koch was a mother ship that accompanied the East German fishing fleet. Built in 1955. It contained hospital facilities and other support functions including a spare parts store and a machine shop.Based in Rostock, the home port of the East German Fischkombinat, it was broken up in 1987 at Santander, Spain. 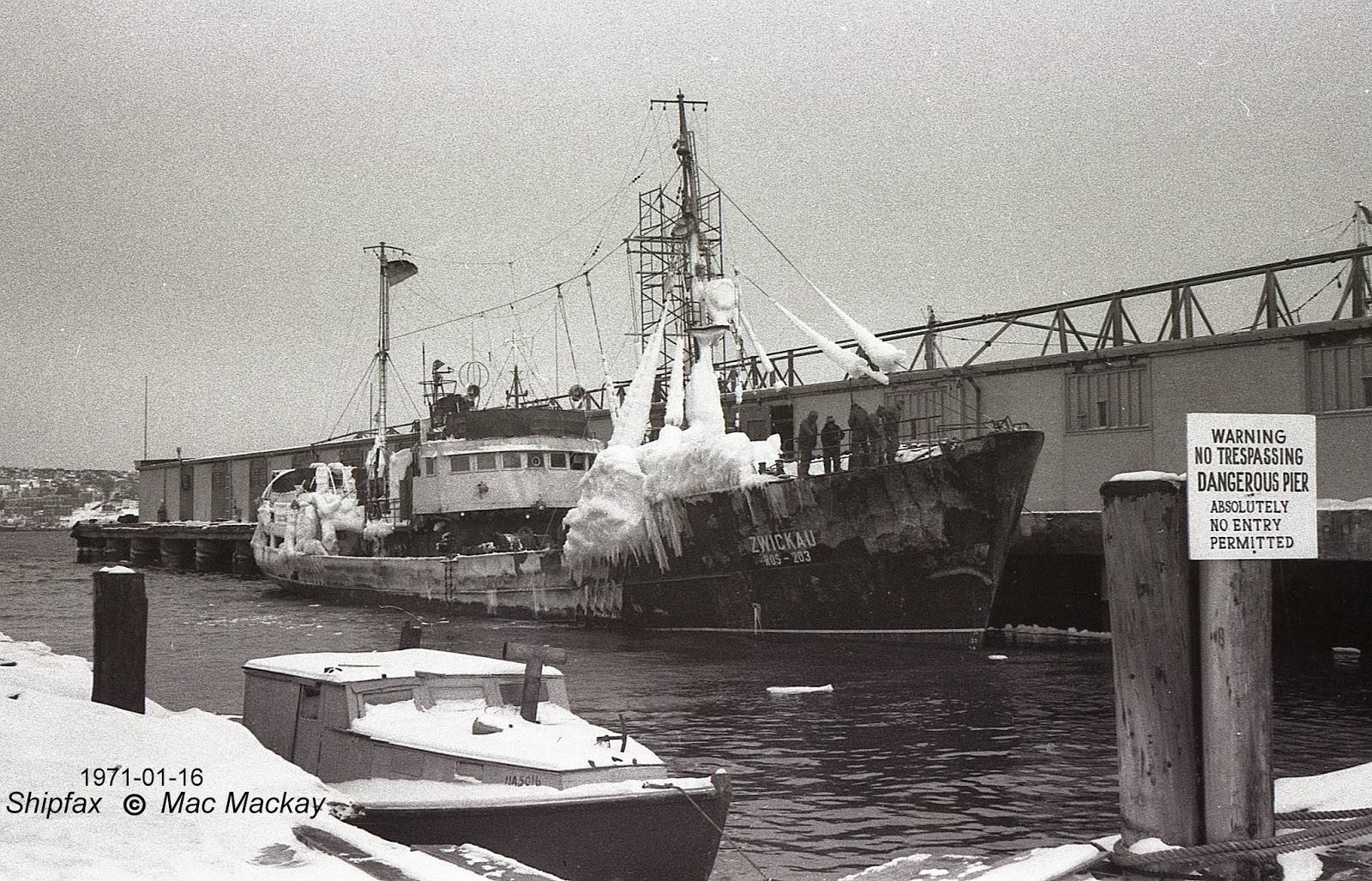 Zwickau was a side trawler, built in 1952 by Volkswerft Stralsund in East Germany. Carrying number ROS-203 it was outmoded by the 1970s as stern trawlers took over. Winter conditions for fishing crews were unpleasant enough, but when freezing spray accumulated the ships put in to Halifax to clear the ice before the ship's stability was compromised. Purdy's Wharf was a favourite berth. 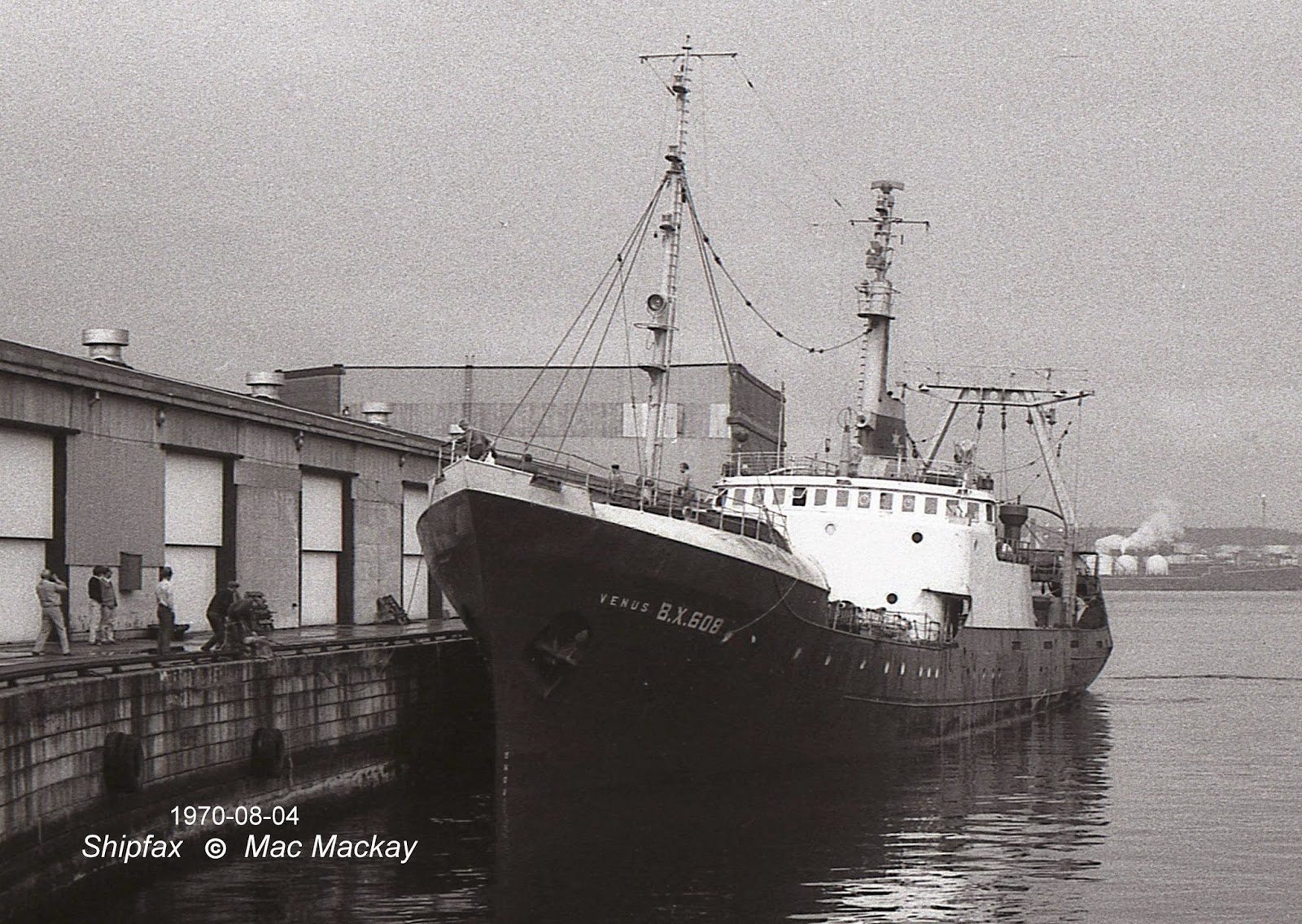 The West German Venus fished out of Bremerhaven, where it was built in 1962, and was a modern stern trawler. In addition to its 1800 bhp main engine, it had a 545 bhp diesel generator that drove an electric motor for secondary propulsion. Sold to Spain in 1973, it suffered a fire at sea and sank in tow December 8, 1979. It arrives at pier 23 with linesmen and one avid photographer waiting on the brow of the pier. 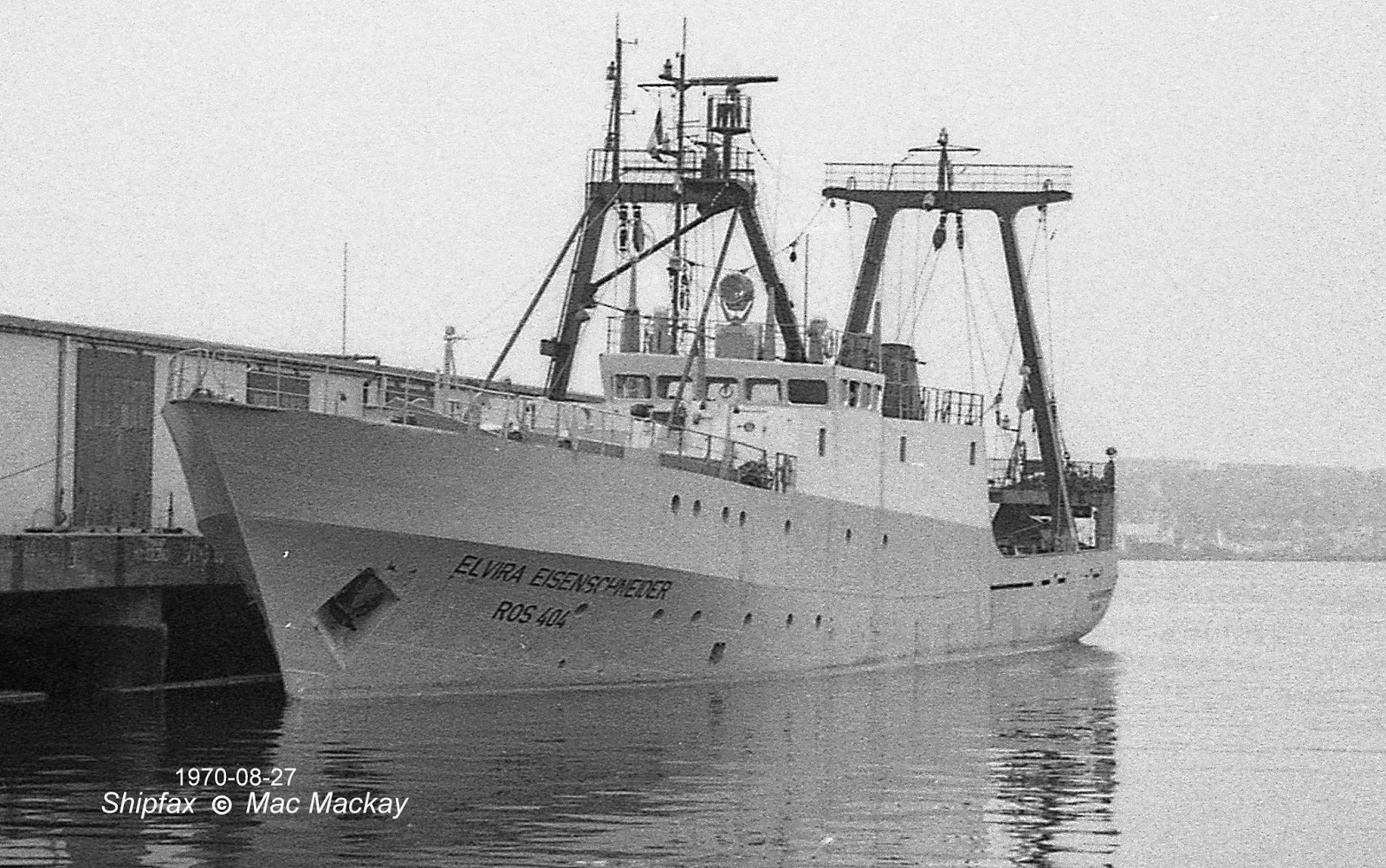 Elvira Eisenschneider was one of a large class of East German stern trawlers. Built in 1966 it arrived in San Esteban de Pravia May 12, 1987, and was broken up June 25, 1987 at La Arena. It is shown tied up on the south side of Purdy's wharf. Note the wheelhouse is offset to port.

Rudolf Shwarz was member of the same class. Built in 1967 by Peene-Werft in Wolgast it was scrapped in Lubeck in 1992. It did not take long for the wear and tear to show on these ships. 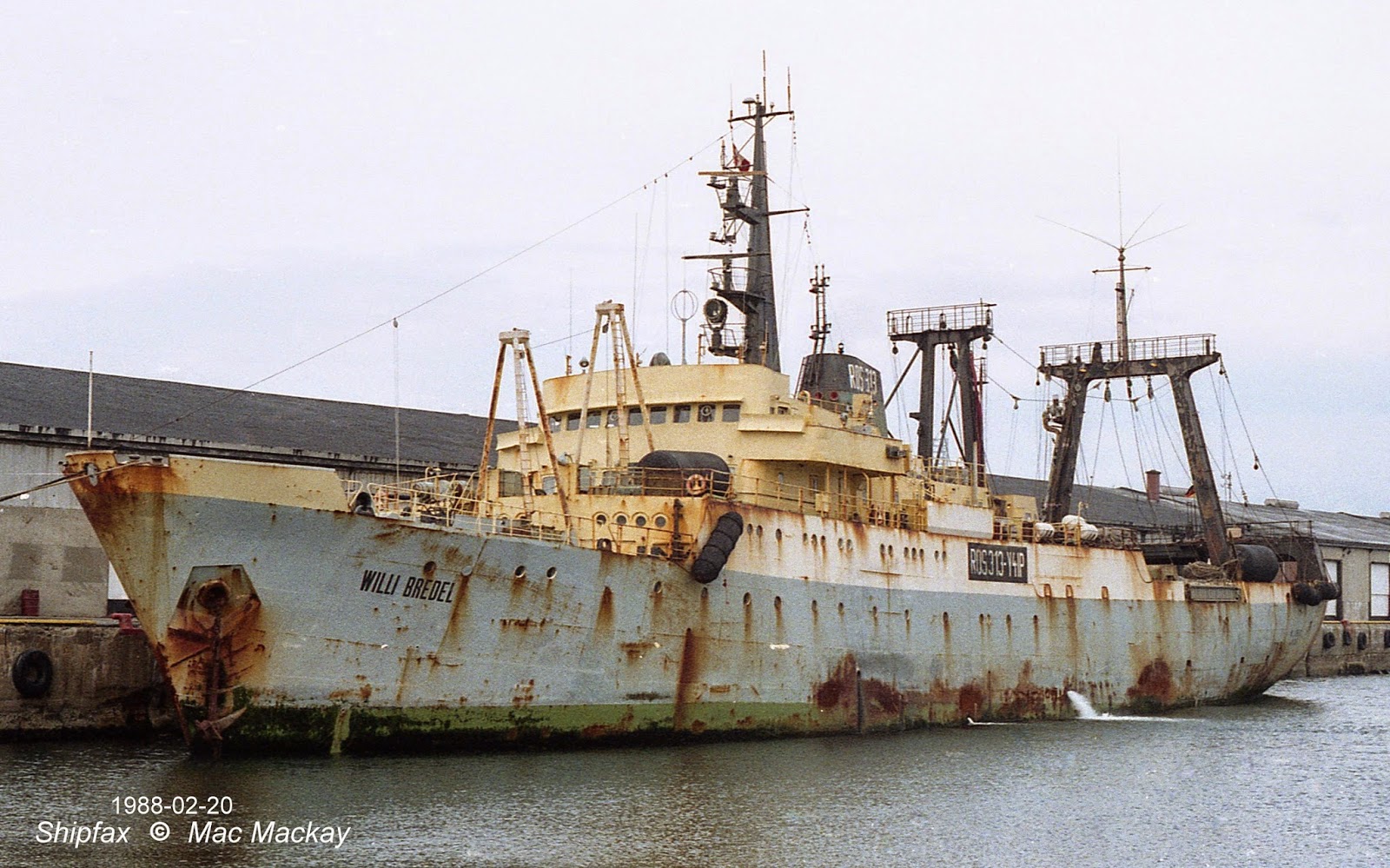 The East German Willi Bredel was similar to the Russian fish factory stern trawlers that processed fish on board. It was built in 1966.Following re-unification it was laid up and arrived El Ferrol December 9, 1991 for scrapping. Spending long periods at sea without maintenance, meant that most trawlers, especially from the Eastern Bloc, were notoriously rusty. 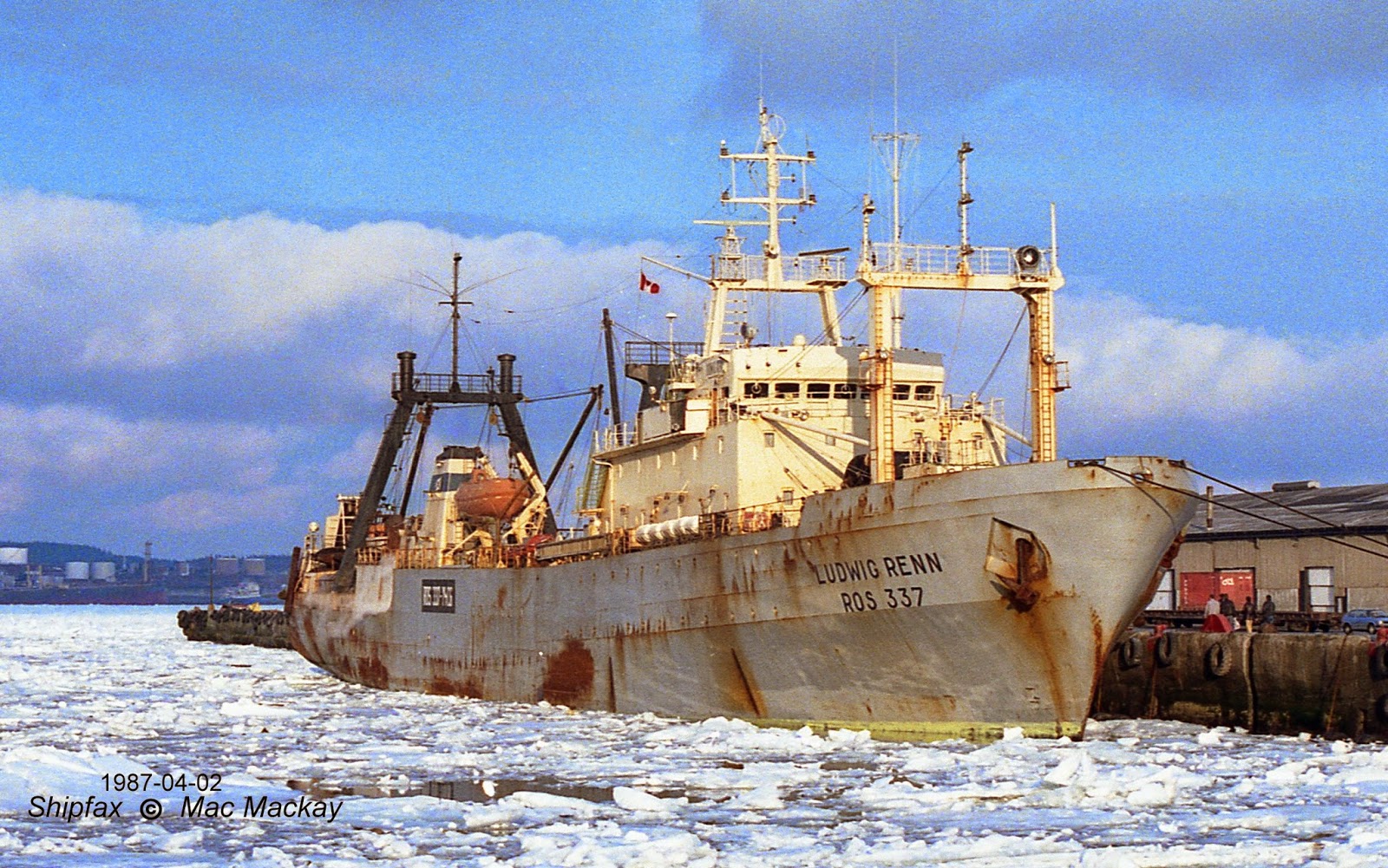 Ludwig Renn, also a freezer factory trawler, was stuck in Halifax for a few days in 1988 when ice choked the harbour. The ice did not form in Halifax, but had drifted down the coast from the Gulf of St.Lawrence. Built in 1982, it passed to the German flag on re-unification, and was renamed Hercules in 1993. In 1995 it was sold to Russia and renamed Mekhanik Bryzgalin. It has not been reported recently. 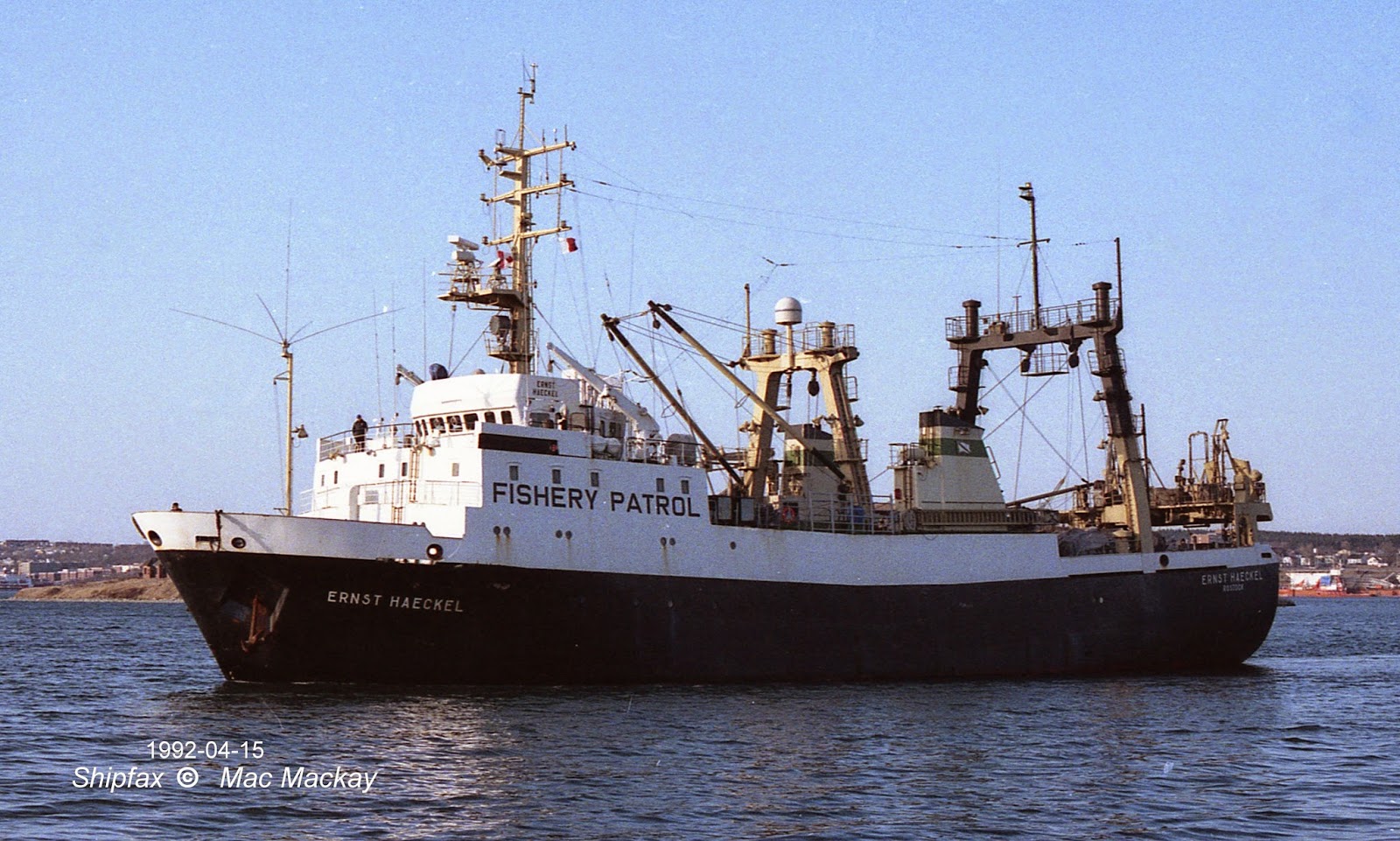 Ernst Haeckel , as with most East German trawlers, was built by Volkswerft in Stralsund, and was one of the last ones built before re-unification. It came out in 1987 and soon passed to the German flag. In 1995 it was sold to Russian interests, and renamed Mio. It was broken up at Jingjiang, China in February of 2014.

With the declaration of Canada's Exclusive Economic Zone to 200 miles offshore, and its policing of fishing effort outside of that zone on the nose and tail of the Grand Banks,  European nations also began to police fishing activity under the Northwest Atlantic Fisheries Association Convention. Some former trawlers  became research or patrol vessels, such as Ernst Haeckel.

All Easter bloc ships were suspected of spying on Canadian and American naval activity, and were often seen shadowing NATO exercises. These accusations were difficult to prove, but most of the trawlers we saw in Halifax certainly did a lot of fishing too.