Left out of the recent feature on Con-Ros (container ships with roll-on, roll-off capability) were the Astrakhan series of ships. Although they could carry containers, they were in reality general cargo ships with extensive cargo handling gear, including heavy lift, but also with RoRo.Thus they were called LoRos (Lift On-Off, Roll On-Off).
All were built by VEB Warnemunde, in what was East Germany, and most were operated by eastern bloc countries, particularly the USSR. They were built to military specs with high grade steel, and Baltic Ice Class B. To be self-sustaining for any type of cargo operation, they had a starboard quarter stern ramp that could be used as a landing stage for lightering operations.They were to be 17,500 deadweight tonnes with 1,040 lane meters for RoRo.
There were three Types or Marks, built between 1986 and 1992.

One of the large users of Astrakhan type ships was Atlantic RoRo Carriers, operating year round out of St.Petersburg, Russia. They were sometims callers in Halifax, but are rarely seen now. Since 2008 the same ships serve Canada States Africa Line (CSAL), the successor to Canadian Christensen Africa Line (CCAL) that was started in 1956 by A/S Thor Dahl. They call in Montreal, then Baltimore and other US ports before crossing to South Africa.

Baltic Mercur experienced Baltic type conditions (but without the ice) in Halifax in 2001 when on Atlantic RoRo service. Built in 1988 as Vyborg for USSR owners, it became Lima in 1996 and Baltic Mercur in 2000 for Hamburg based owners, Interorient Navigation Co Ltd, under the Liberian flag. It is a typical Type I Astrakhan, with 125 tonne heavy lift derrick.
It arrived in Alang September 18, 2014 and was soon broken up.

Atlantic Action was only in port for an hour when it called in 2005, working very little cargo.

In 2006, upbound on the St.Lawrence River it seemed to be loaded with containers.

It is a Type III, with only a single crane forward, built in 1993 as Victor Konchayev. In 1996 it became Gemini Star and carried the names 97: Bremen Carrier, 98: Nordana Kisumi, 99: Seaboard Chile, 2001: Atlantic Cavalier to 2002, before receiving the name Atlantic Action.
Since 2010 it has been sailing under the Maltese flag for Atlantic Ship Management of Odessa, Ukraine. 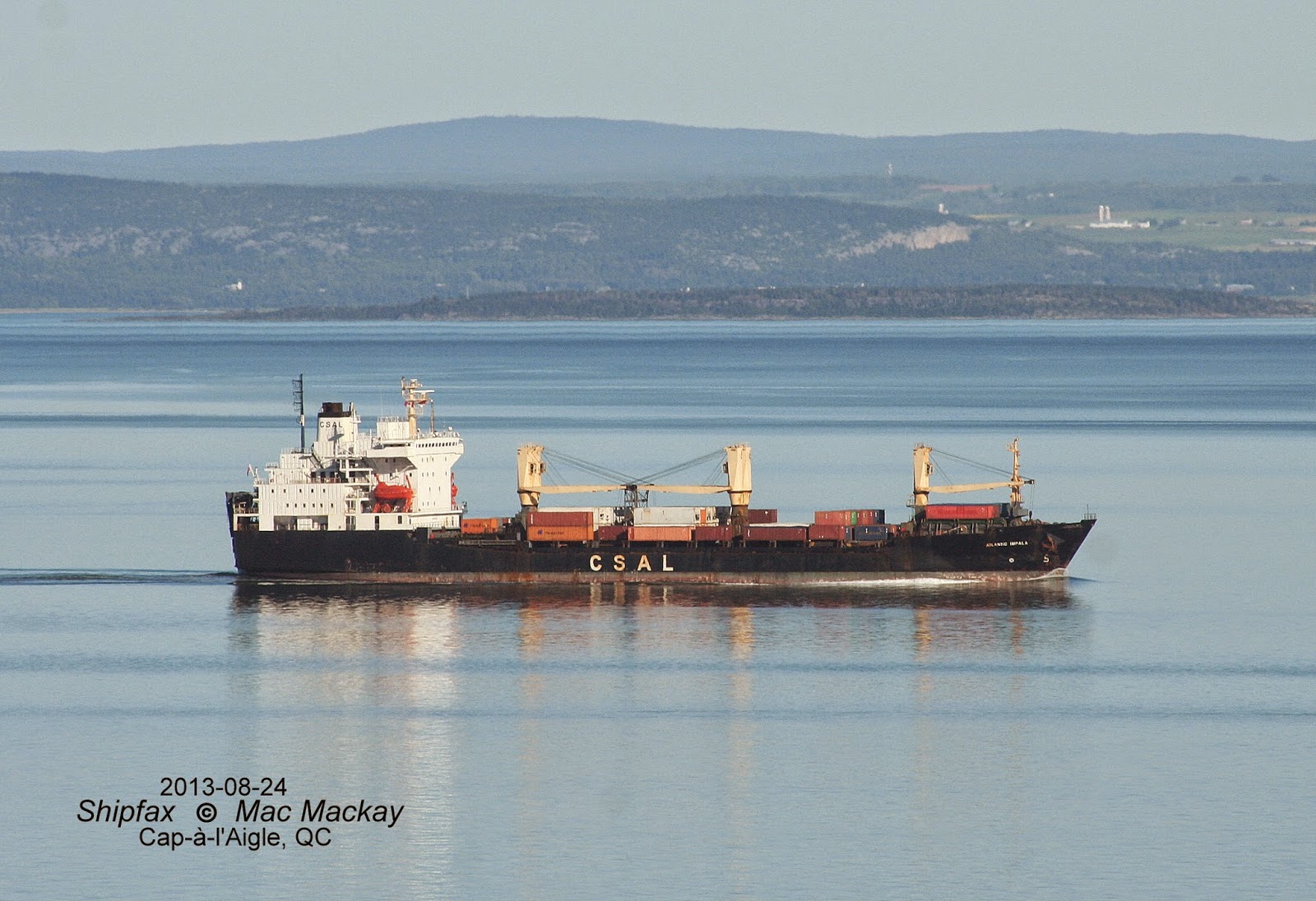 Atlantic Impala glides up the St.Lawrence on CSAL service.It was launched in 1990, but not delivered until 1993 as a Type III Astrakhan, with single crane forward. Its original name was Georgiy Tovstonogov and followed a similar pattern to others of its type as 96: Global Falcon, 98: Bremer Falcon, 99: Seaboard Peru, 02: Nordana Surveyor, 03: Nord, 03: Rotorua before becoming Atlantic Impala in 2008.
At last report December 17,  2014 it was anchored in the Bay of Bengal south of Chittagong awaiting a scrap berth.

The Mark I Astrakhan cared a heavy lift derrick amidships. 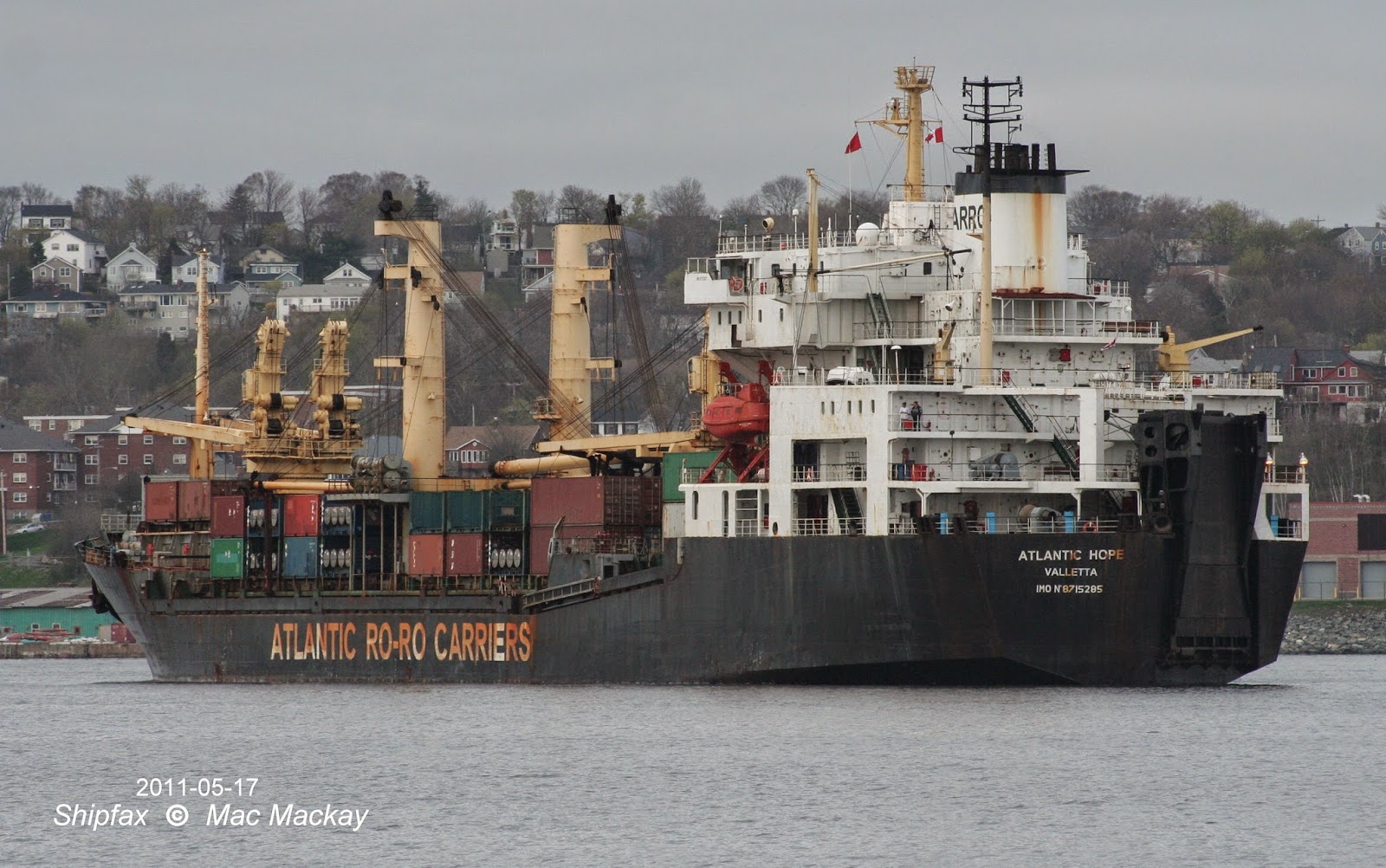 The stern ramp was mounted on the starboard quarter, and fed internal ramps to the tween decks.

There is also one Astrakhan class ship flying the Canadian flag. Anna Desgagnés was built in 1986 as Truskavets, and was acquired by Transport Desgagnés in 1996. It is used for northern supply work in summer and for several winters was flagged out to Barbados and worked by Atlantic RoRo Carriers. Its normal route was St.Petersburg, Charleston, Baltimore, New Orleans, Brownsville, Houston, Rotterdam, St. Petersburg.

With its ice class and self-sustained cargo capabilities it was well suited to northern supply work. It could load and unload at anchorage using tugs and barges which it carried as deck cargo. Its stern ramp could also be brought into use for RoRo and as a landing stage. As newer ships come along it has been relegated to a lesser position in the operation, and will likely only be operating for another year or so at most.

I have never taken a photo of the ship, so instead refer to a spec sheet provided by its owners:
http://www.groupedesgagnes.com/images/upload/Anna_anglais111.pdf

There are also numerous photos of the ship in action on the web. Click on Images https://www.google.ca/#q=anna+desgagnes

As with the ConRos in the previous post, LoRos are also diminishing in number are not being replaced. In fact Atlantic RoRo Carriers has added non RoRos to its fleet to replace the scrapped Astrakhans. So we must enjoy them while we can.