Not all classic tankers with island bridge were deep sea vessels. Some were built for coastal and Great Lakes work. They traveled widely, some even getting as far afield as Venezuela, but they never ventured too far out to sea.

Back by popular demand is Gulf Canada ex B.A.Peerless mentioned in the previous post

In full Gulf Oil livery, Gulf Canada makes its way up harbour in tow in May 1980, fresh from the shipyard and about to enter service for the season.

The crew is taking a supper break, having just painted out the word "Gulf" in the ship's name at the IEL dock in Dartmouth. They have already painted over the Gulf symbol on the funnel. It is about to become Coastal Canada. Unfortunately they went on to paint the funnel black which did nothing for the ship's looks.

There were many canal sized tankers operated by all the oil companies. They worked the Lakes, the St.Lawrence River and often the Atlantic coast in winter, reaching Halifax, Saint John and even to Newfoundland. With the opening of St.Lawrence Seaway in 1959, they were so small that they traveled in tandem so as to fill the lock with two ships. 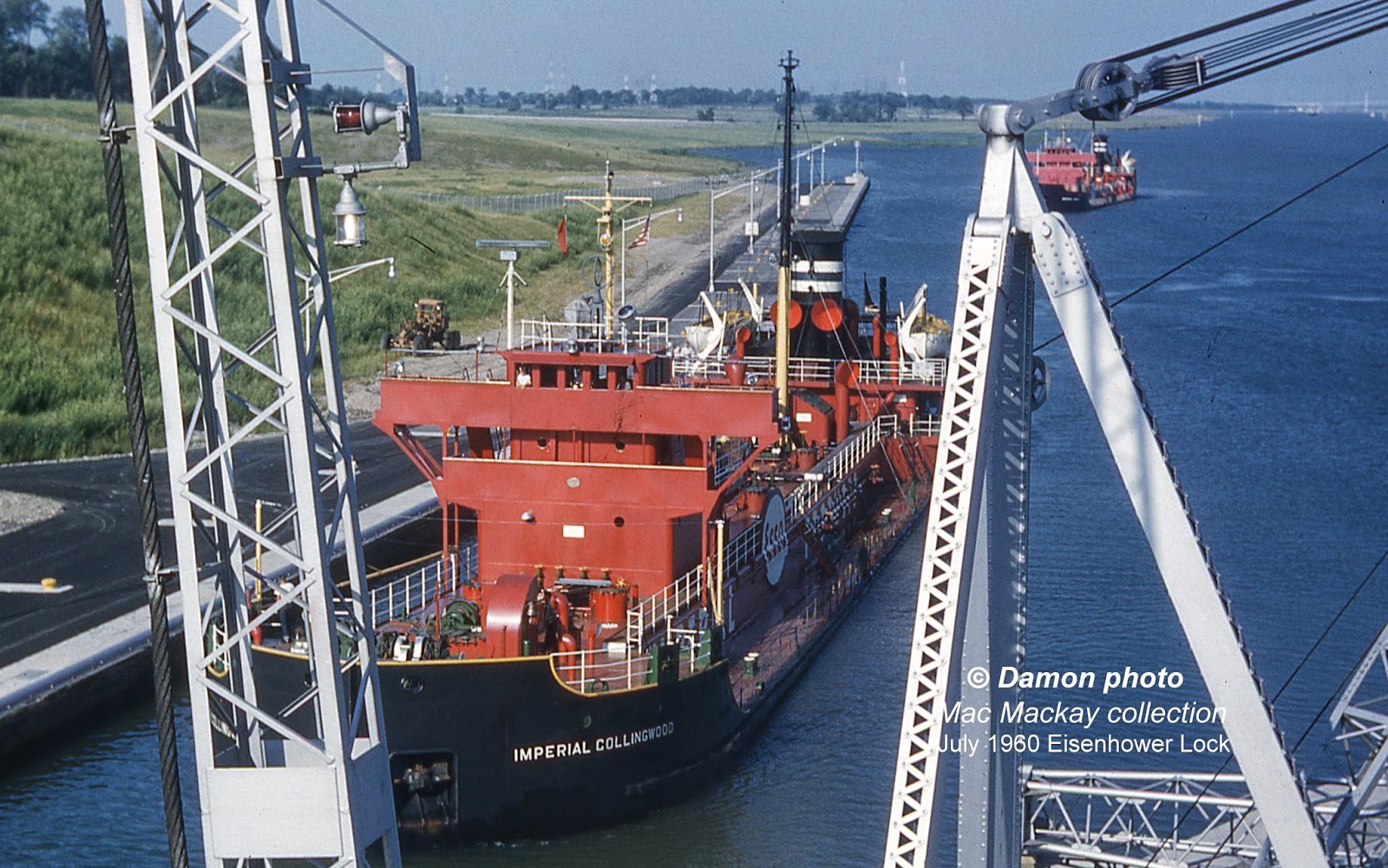 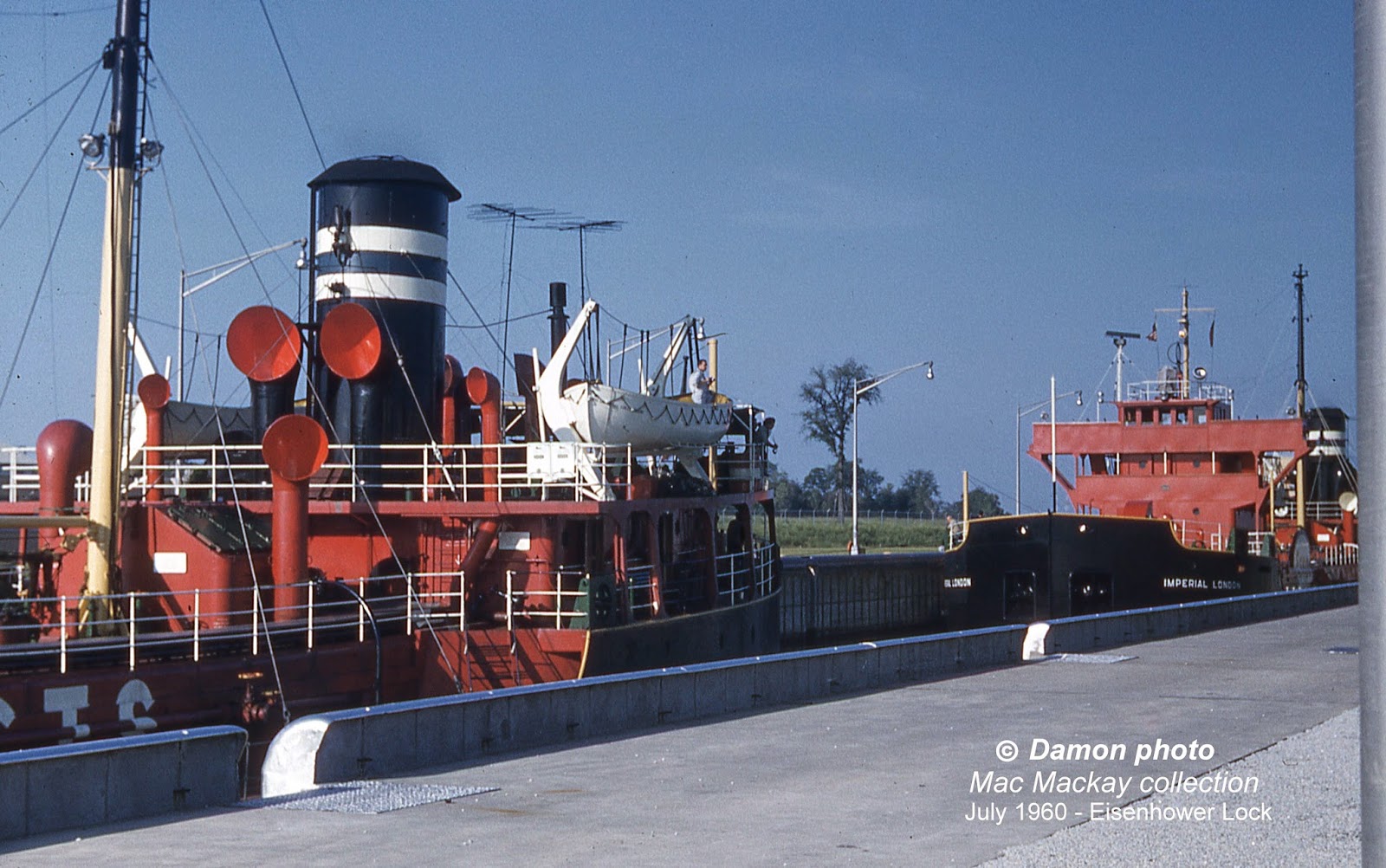 Imperial Collingwood and Imperial Windsor  London could both fit in the Eisenhower Lock with ease. Imperial tankers were always in pristine condition as these photos by the late Phil Damon attest.

Imperial Collingweood soon got a make over. Built in 1948 at Collingwood to canal dimensions, the ship was lengthened 41-'6" by Canadian Vickers in 1961. At 302'-3" (Lloyd's says 299-8") it  was more productive, but it was sent to MIL in Sorel in 1969 where it received a new bow and stern, lengthening it another 30 feet. Its efficient Uniflow steam engine made the investment worth while, and the new bulbous bow and extended stern gave it better sea keeping and it was more efficient going through the water.
When it was replaced by a new ship it was sold in 1979 and was refitted in Halifax as Seaway Trader, and painted a garish green.

Seaway Trader shows off its bulbous bow at Dook's dock in Eastern Passage while acquiring a new paint job.
It served until May 1887 when it was sold to Mexican owners as Patricia II. In 1992 it became Balboa Trader and in 1995 Rivas before arriving in Cartagena de Indias, Columbia,  May 8, 1995 to be broken up.

The much older Imperial Cornwall did not fare quite so well. It was built in 1930 by Furness Shipbuilding, Haverton Huill yard, as Acadialite for Imperial Oil. It was powered by a a triple expansion steam engine from North East Marine Engineering Works.
In a fleet-wide renaming in 1947 it became Imperial Cornwall  but had a bit of an upgrade in 1957-58 when its original teak bridge structure was replaced by the steel bridge from Imperial Kingston. In 1970 it was transferred to Halifax as port bunkering tanker, but that was only a stopgap until the new bunkering tanker Imperial Dartmouth could be delivered.It shuttled fuel to the Nova Scotia Light + Power Corp's Water Street generating station, and refueled ships, but it had an unfortunate propensity to wander when in reverse and it took countless moves to back in between the finger piers. 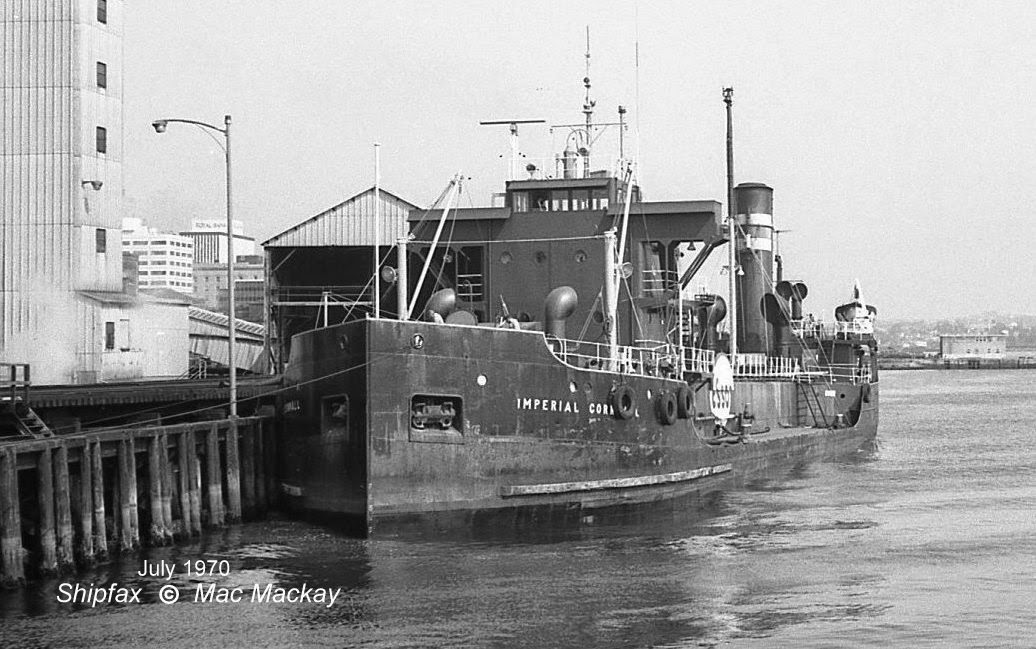 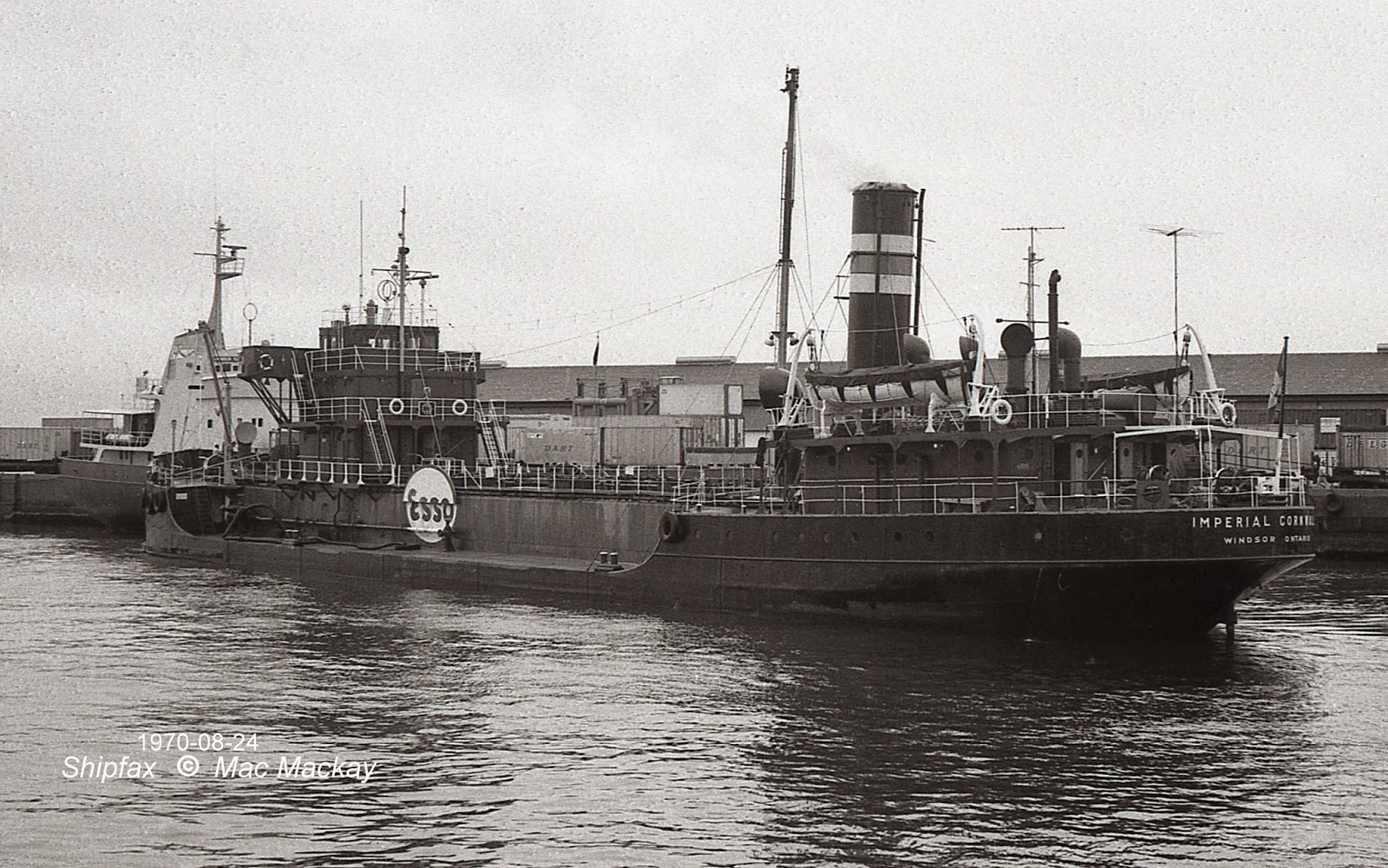 Imperial Cornwall backs and fills to get alongside a ship at pier 31. After several moves, it finally made it.

In 1971 it was sold and renamed Golden Sable to work as a feeder from the Golden Eagle Refinery in Lévis, QC, but two different owners could not make a go of it, and it was condemned as unfit for clean products in 1972. It ended up in Louiseville, QC where it was used as a dock for a time before being broken up.

One of the quaintest island bridge tankers was always a curious sight because of the odd appearance of that very structure. 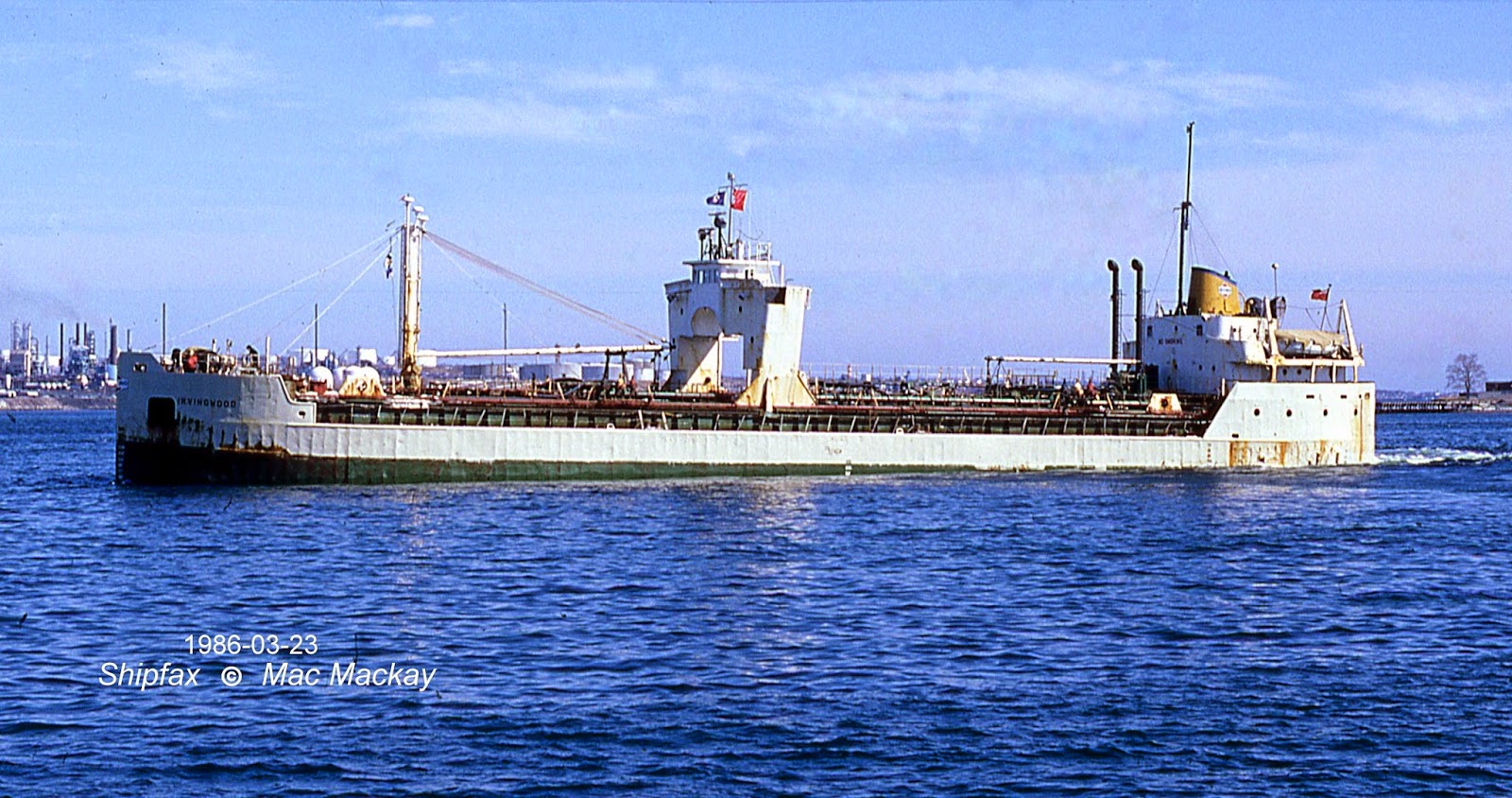 Originally to be named Wellington Kent it was delivered by George T.Davie + Sons of Lauzon, QC as Irvingwood, and was a bulk carrier. It was fitted with a traveling gantry to handle the bulk pulpwood and the bridge was open below to allow for the gantry to pass through. It could also carry steel and grain, and was built to canal dimensions. Owners Kent Line Ltd of Saint John, NB  sent it on what must have been a hair raising transatlantic crossing to North Shields, England , where it arrived February 16, 1957 for conversion to a tanker.  That done it returned to Canada, still with the arched bridge, but no longer any gantry, and served out its life with that unique feature. It served Irving Oil depots all over Atlantic Canada and Quebec, and even made a DOT supply trip to the arctic in 1959. 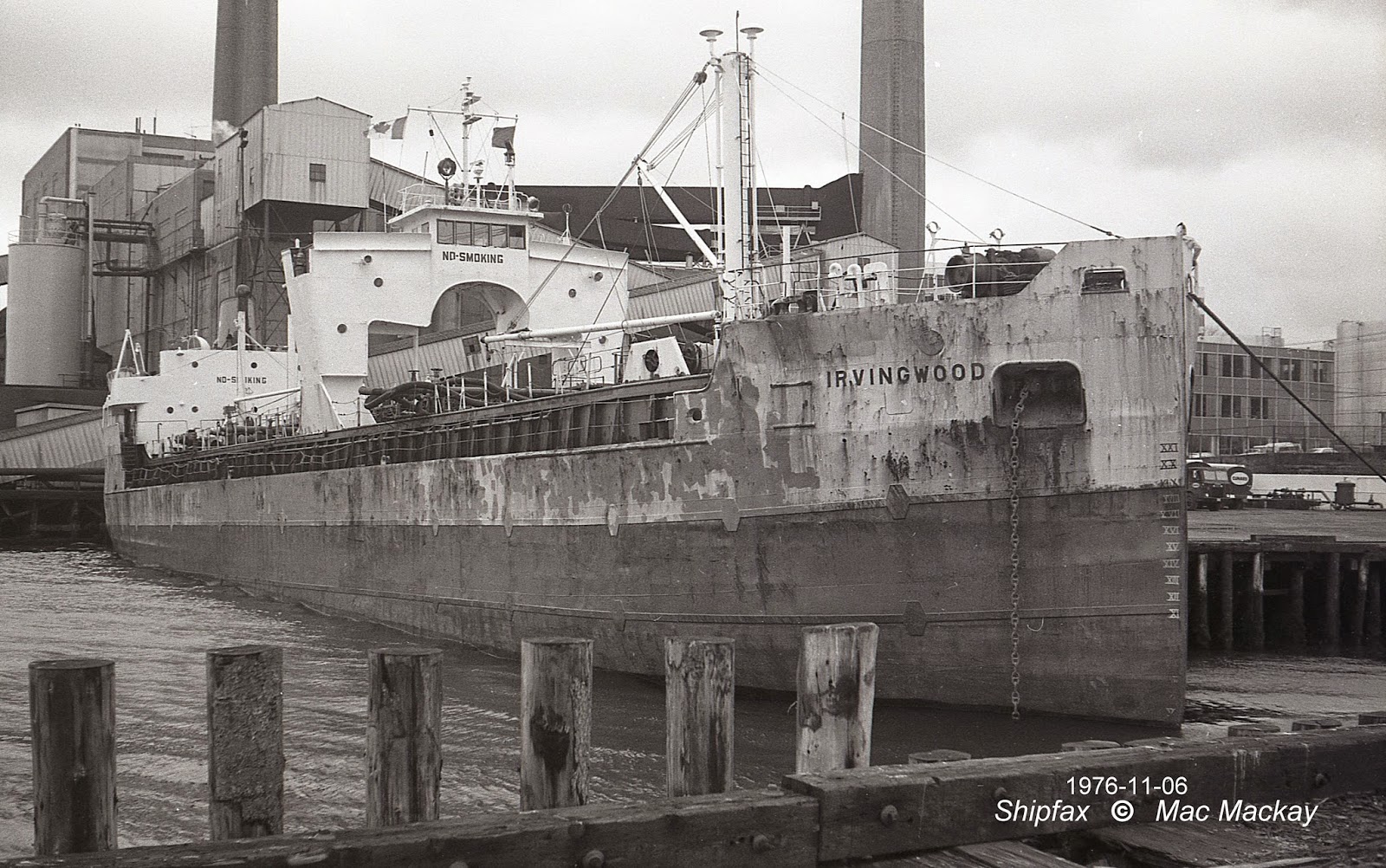 Desperately in need of paint, Irvingwood has unloaded a shuttle cargo of furnace oil from Dartmouth to the S. Cunard Co pier in Halifax, looking just about ready for the scrappers. However it sailed for at least another year before getting a lick of paint, then another seven years.

It was fitted with a wartime built 16 cylinder GM Cleveland engine in 1952 then another of the same vintage in 1974. However it suffered from bouts of engine failure and was towed around by a tug from time to time.
It was broken up in 1987 in Sydney harbour at Point Edward, NS.

By 1984 the painters has been at work, and the ship looked quite decent for its last few years of service.