SCL Bern arrived last night on another of its regular trips between Europe, Cuba and Canada. The ship takes general cargo to Cuba and brings nickel ore to Halifax. Aside from rum (and cigars), nickel is one of Cuba's most important exports. 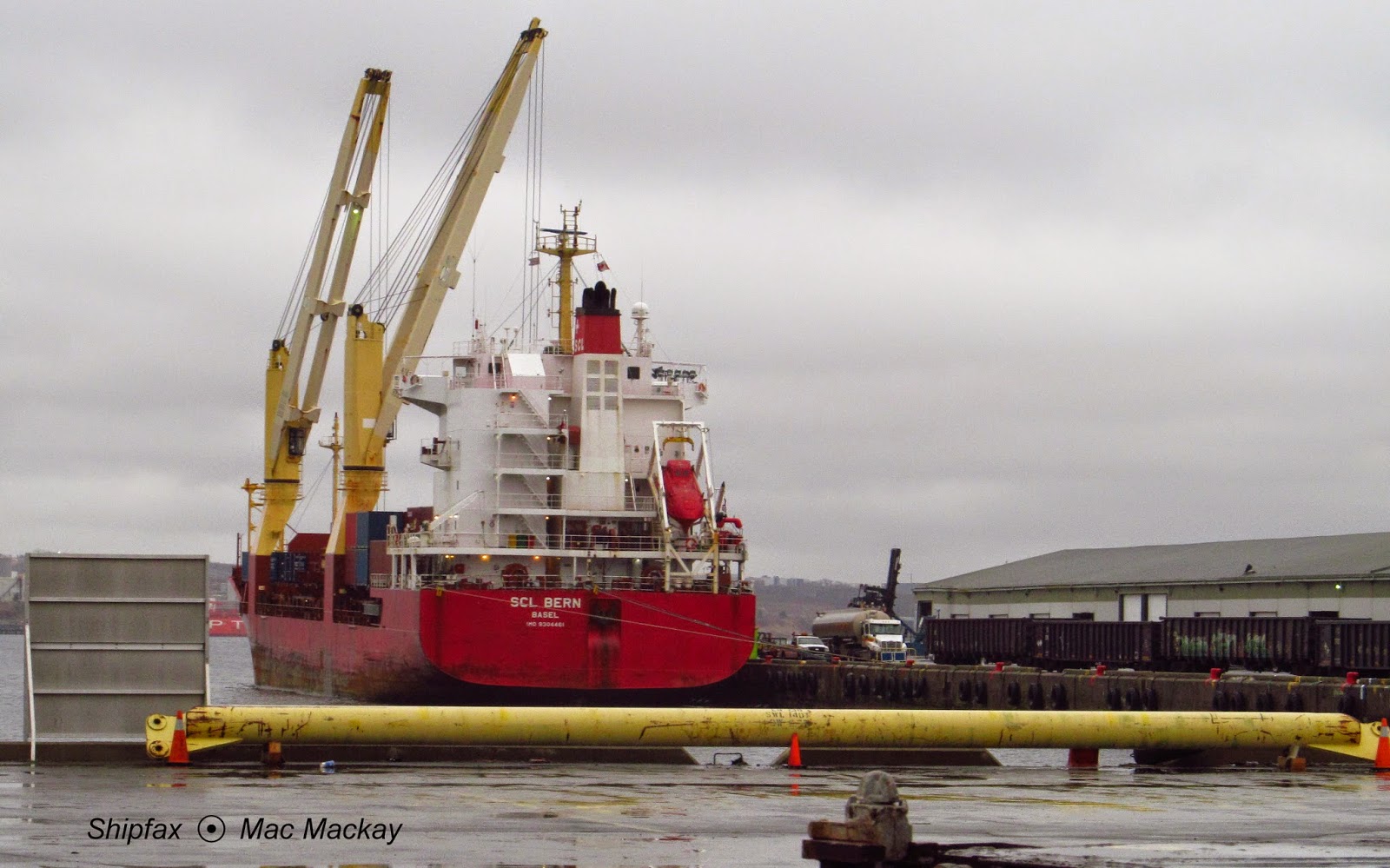 SCL Bern working cargo at pier 31 and taking bunkers from a truck. Rail cars are lined up to take the nickel cargo.

On arrival in Halifax the ship is met with a string of railroad gondola cars. The ship uses its own cranes to land the nickel which is carried in freight bags. The ore tends to behave like a liquid in bulk, and is very dangerous to carry loose, so it bagged for safe stowage and the ensure that the ship maintains stability.
Large forklifts carry the nickel bags from the ship to the waiting rail cars, where they are stowed for transport to Fort Saskatchewan, AB for processing. Some cargo may also be stored in the freight shed.
With the announcement that the United States is loosening ties with Cuba, there is some concern that there may be a re-awakening of dispute over the source of the nickel. When Fidel Castro took over during the Cuban revolution in 1960, one of his first acts was to nationalize the Moa nickel mine owned by the US company Freeport Sulphur Co (now Freeport-McMoRan). Freeport had a deal to sell the nickel and cobalt to the US as a strategic product. The company sued but the issue has never been settled.
The Canadian company Sherritt International arranged with Cuba to recover nickel pyrites tailings (ferro nickel) and to mine more nickel ore, and bring it to Canada for refining at a jointly owned plant. It is then sent on to Europe for final processing. This resulted in a general black list in the US for anyone dealing with the nickel -including Sherritt and some of its executives.
For years Nirint Shipping of the Netherlands has been handling the nickel, and bypassing the US on its way to and from Cuba due to the general trade embargo. One can't help but wonder if Freeport-McMoRan want to take action again. Nickel is one of Cuba's most important sources of foreign exchange, and the country has one the world's largest supplies of the material, which also exports to Russia and China.

SCL Bern flies the Swiss flag, and is operated by Enzian Ship Management on charter to Nirint Lines. It was built in 2005 by Kyokuyo Ship Building and Iron Works in Shimonoseki, Japan and measures 9990 grt and 12,578 dwt.