From deep within the shoebox we find the Canadian research trawler A.T.Cameron. 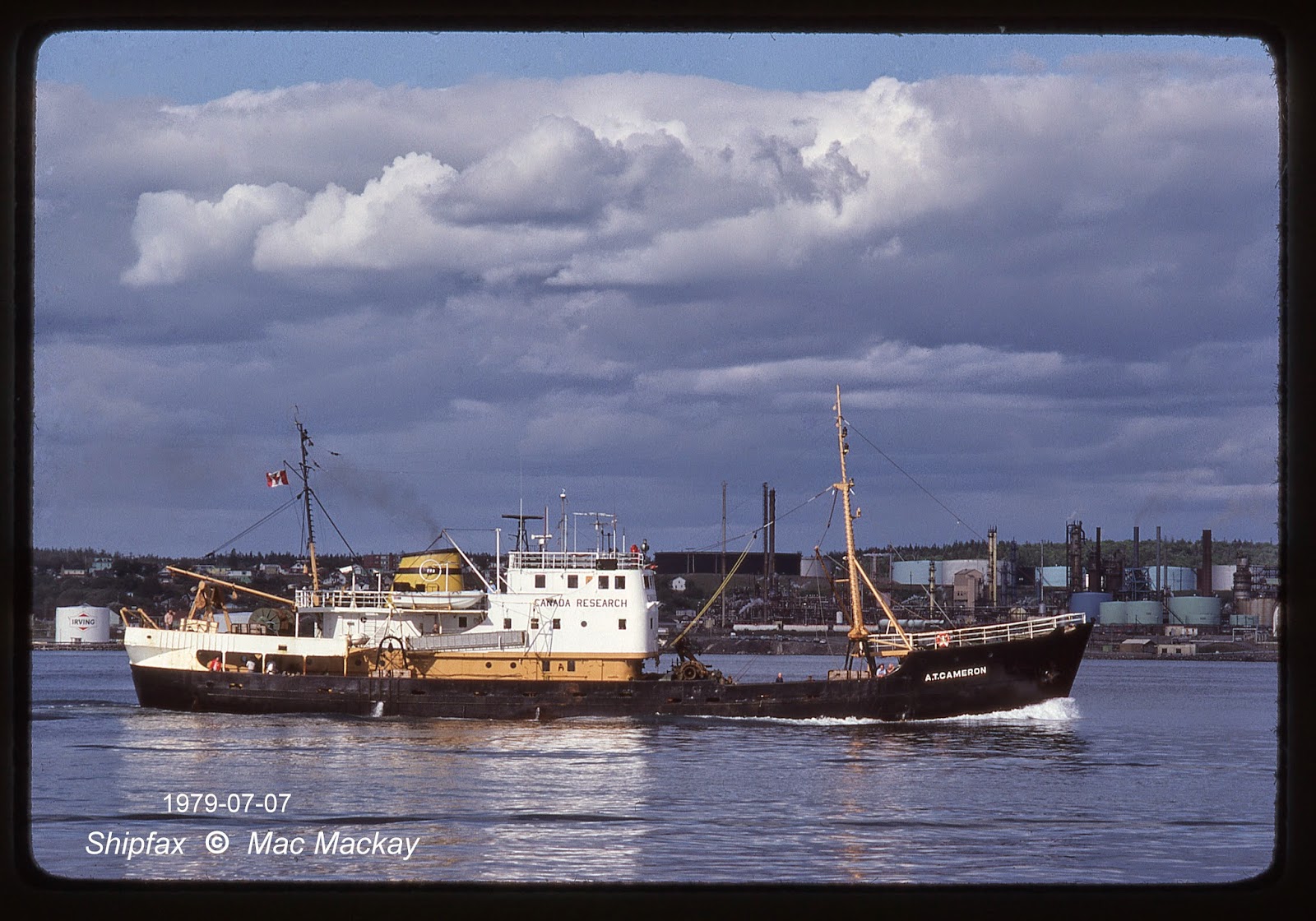 In 1956 the Fisheries Research Board of Canada ordered the construction of this vessel from Marine Industries Ltd in Sorel, QC and it was delivered in late October 1958. Interestingly Canadian naval architects Milne Gilmore+German wrote the specifications for the ship, but it was designed by Graham+Wodnough of London, England. Built to trawler lines, it had an aluminum superstructure and was fitted with a second deck, except in the engine room. Dimensions were 177-'3" loa x 32-5" breadth and 12'-7"draft.
Powered by a 1,000 bhp B+W Alpha engine, it had a range of 7500 miles. Its six officers, 19 crew and nine scientists trawled for fish but also trialed new gear, different nets and various methodologies, and conducted tests in the labs. 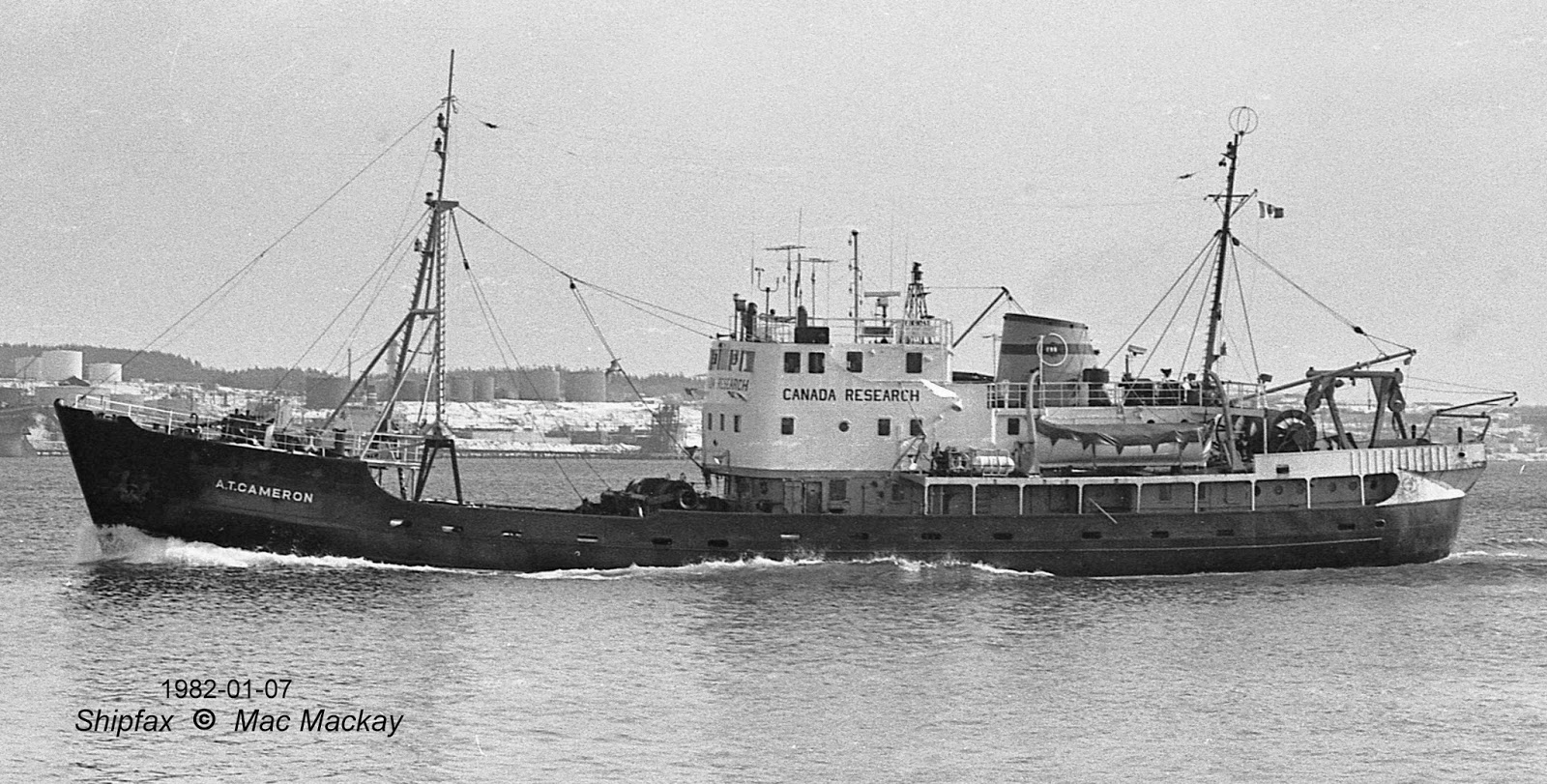 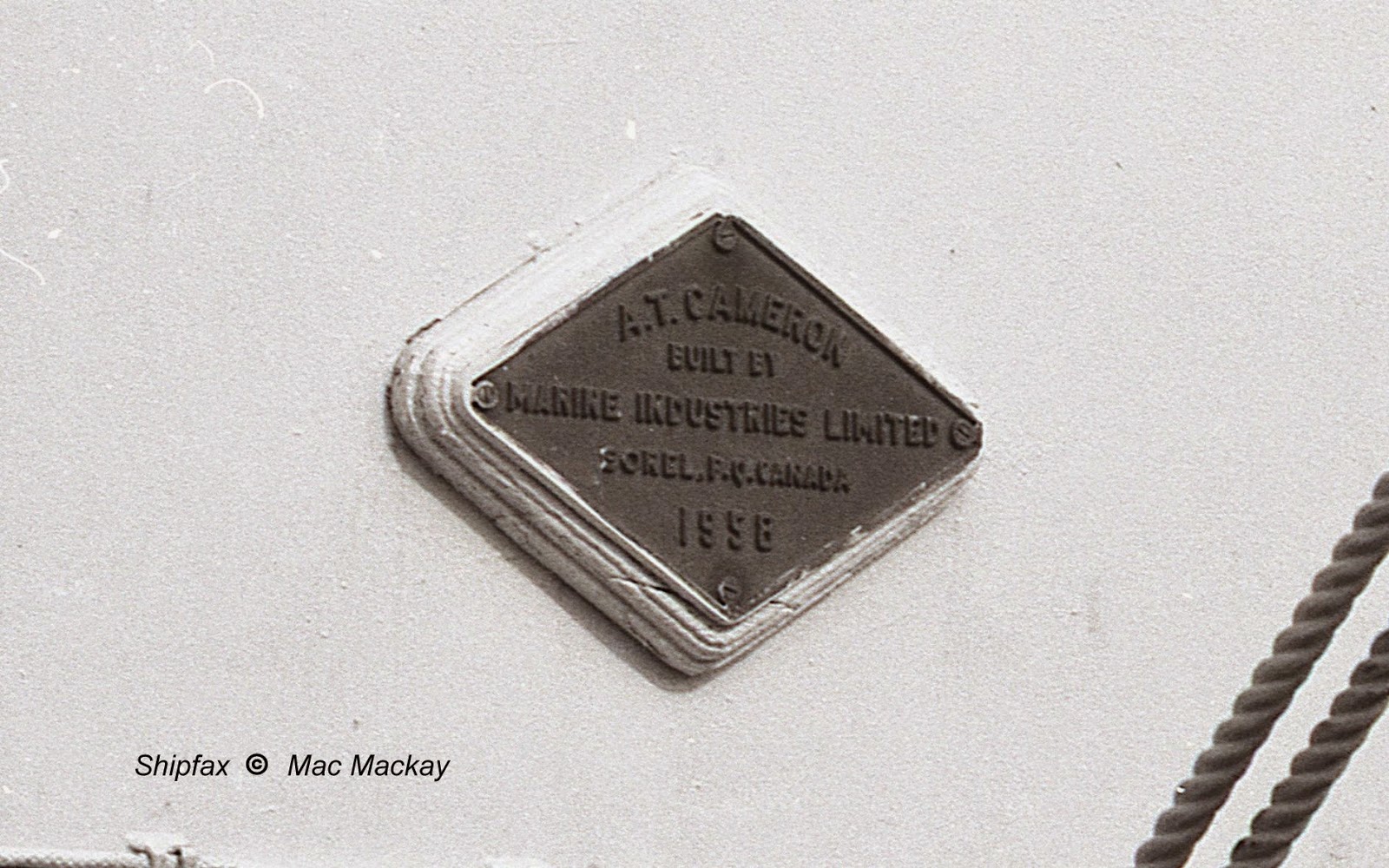 Delivered at 748 grt (later 753 grt), it was named for the  the late Alexander Thomas Cameron, Chair of the Fisheries Research Board (FRB) from 1934 until his death in 1947. First skipper was Capt. Baxter Blackwood. To be based in St.John's, Newfoundland, it worked on the Grand Banks and in the Gulf of St.Lawrence for 2/3 of the year, but shifted to Halifax or St.Andrews, NB in winter where it worked as far south as George's Bank. There was a large FRB lab in Halifax at the time, and its field work was often conducted by the Cameron, although it also had its own research trawler, the Harengus.[see Appendix] 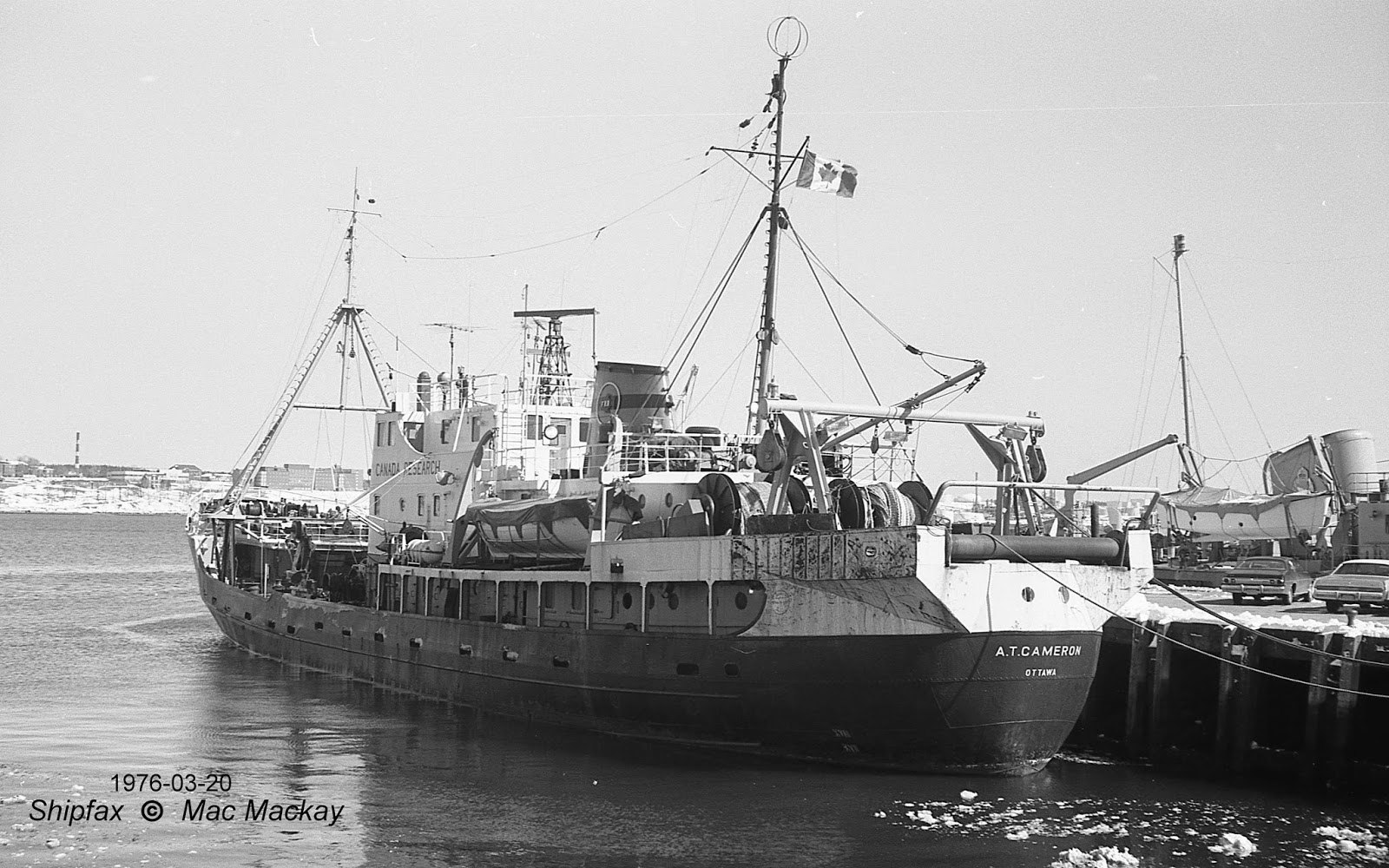 The ship was ice strengthened, but that was more as a convenience, since the Grand Banks is more dangerous for freezing spray in winter, and the Gulf is too choked with ice to conduct most research, particularly with nets.


After twenty-three years of faithful service, although still in excellent condition, the boat had become outmoded. Since most commercial fishing was now conducted by stern trawlers, the Department ordered new ships of that type. Wilfred Templeman was the replacement, to be based in St.John's and Alfred Needler, a twin, based in Halifax.

A.T.Cameron was renamed 81-4 in 1981 and decommissioned. However there were teething problems with the engines in the news trawlers and 81-4 returned to service well in to 1982. 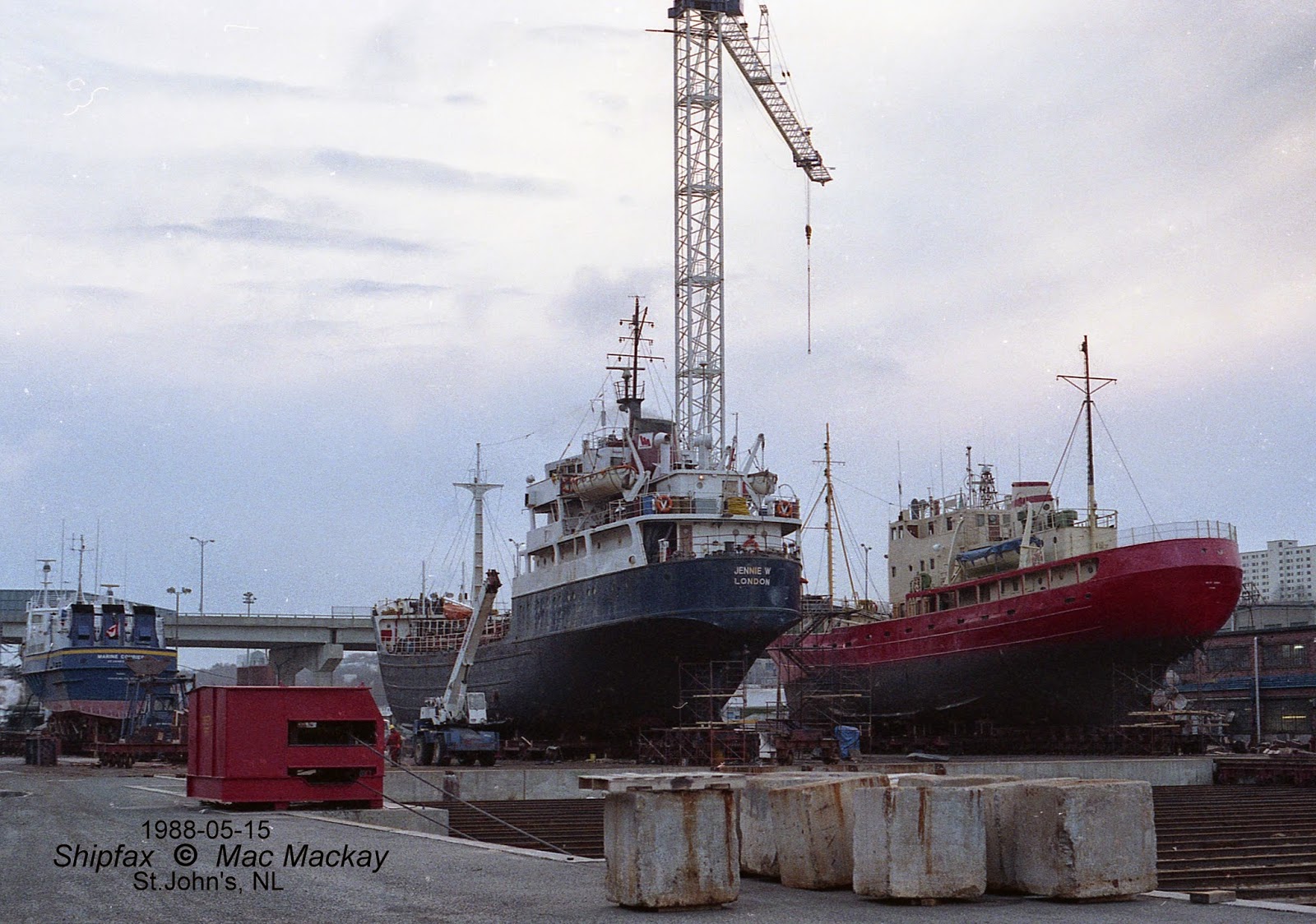 Arctic Ranger shows off her fine lines on the synchrolift at Newfoundland Dockyard. Marine Atlantic's Marine Courier is hauled out at left, and the tanker Jennie W. is in the middle.


When finally sold, it went to Central Fuel + Supplies Ltd of Glovertown, NL and was renamed Arctic Ranger (namesake was a famous Newfoundland sealer). It was used for research, patrol and standby duties until re-sold in 1988. 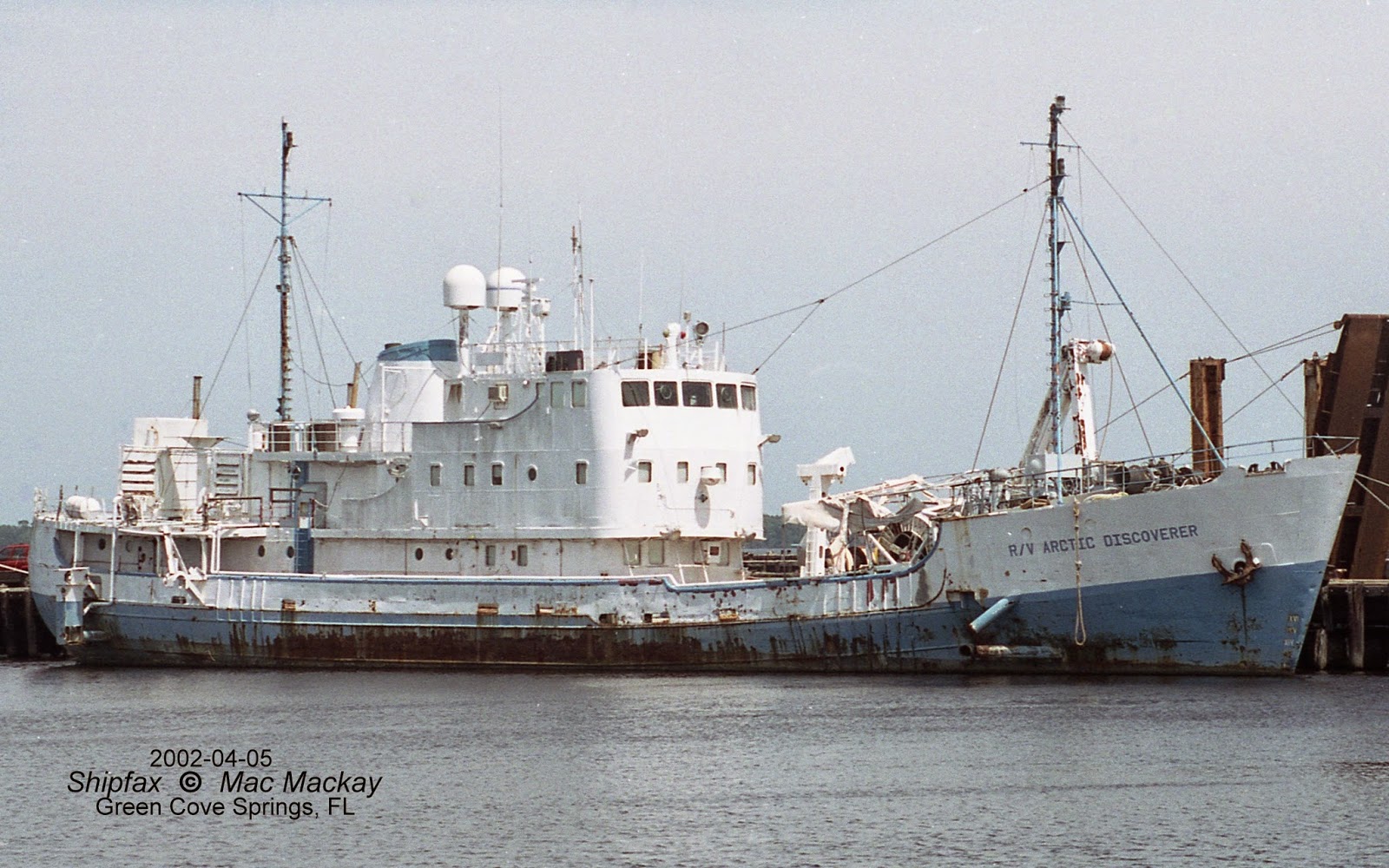 It then began an interesting phase of its career as Arctic Discoverer under the US flag, but owned by a Canadian sub-sea salvage firm. It is credited with finding and salvaging huge quantities of Spanish treasure from sunken ships in the Caribbean. By 2002 it has been laid up in some time at Green Cove Springs, FL and mouldered there until finally broken up in May 2013.

That might have been the end of the story except for one industrious mariner from the Netherlands, while visiting Green Cove Springs as master of a ship in 2013, found one of A.T.Cameron's original lifeboats, bought it, transported it back to the Netherlands as deck cargo and converted it into a delightful little cruiser.  Named Arctic Ranger, the indestructible aluminum boat will likely keep A.T.Cameron's memory alive for some time to come. 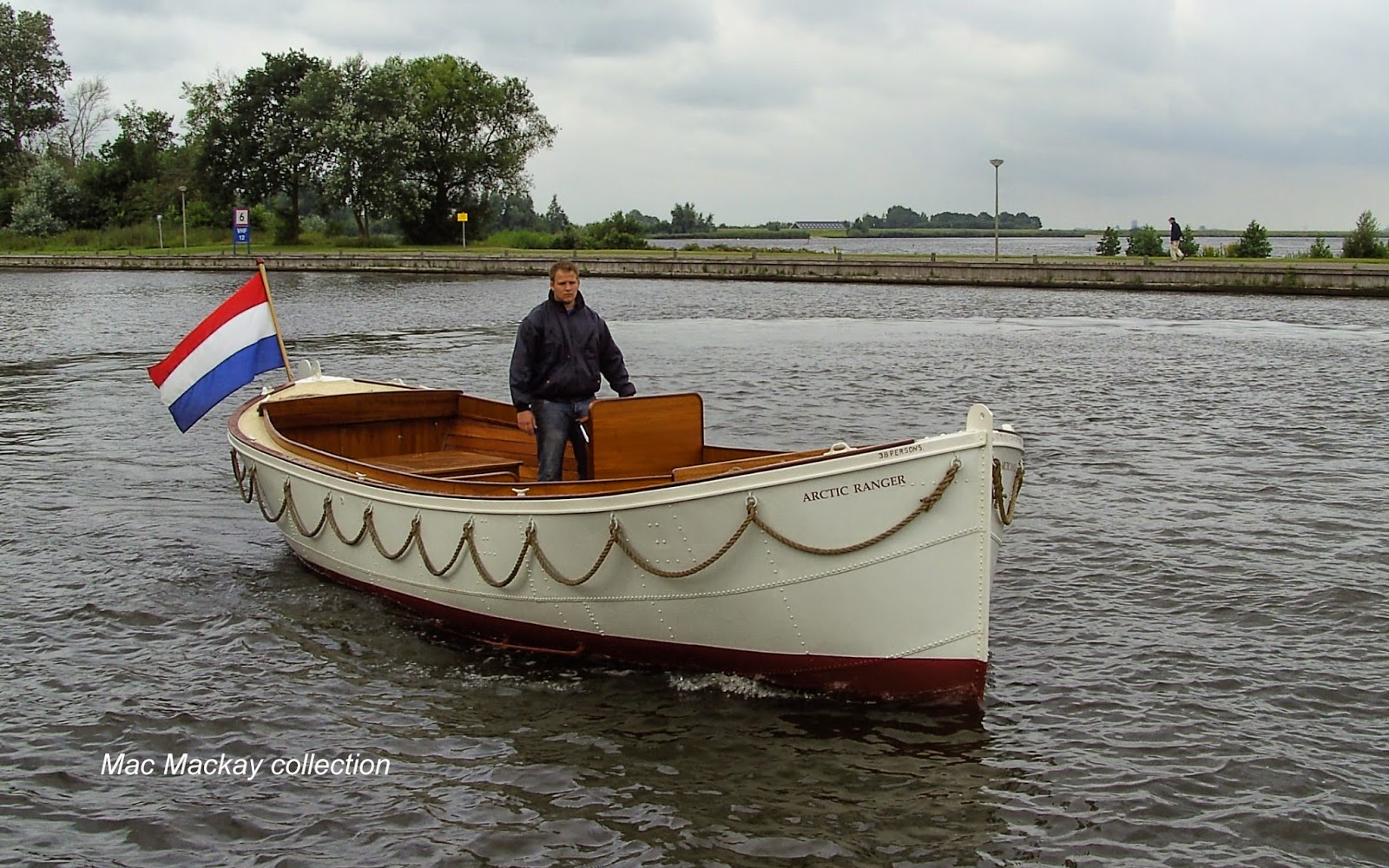 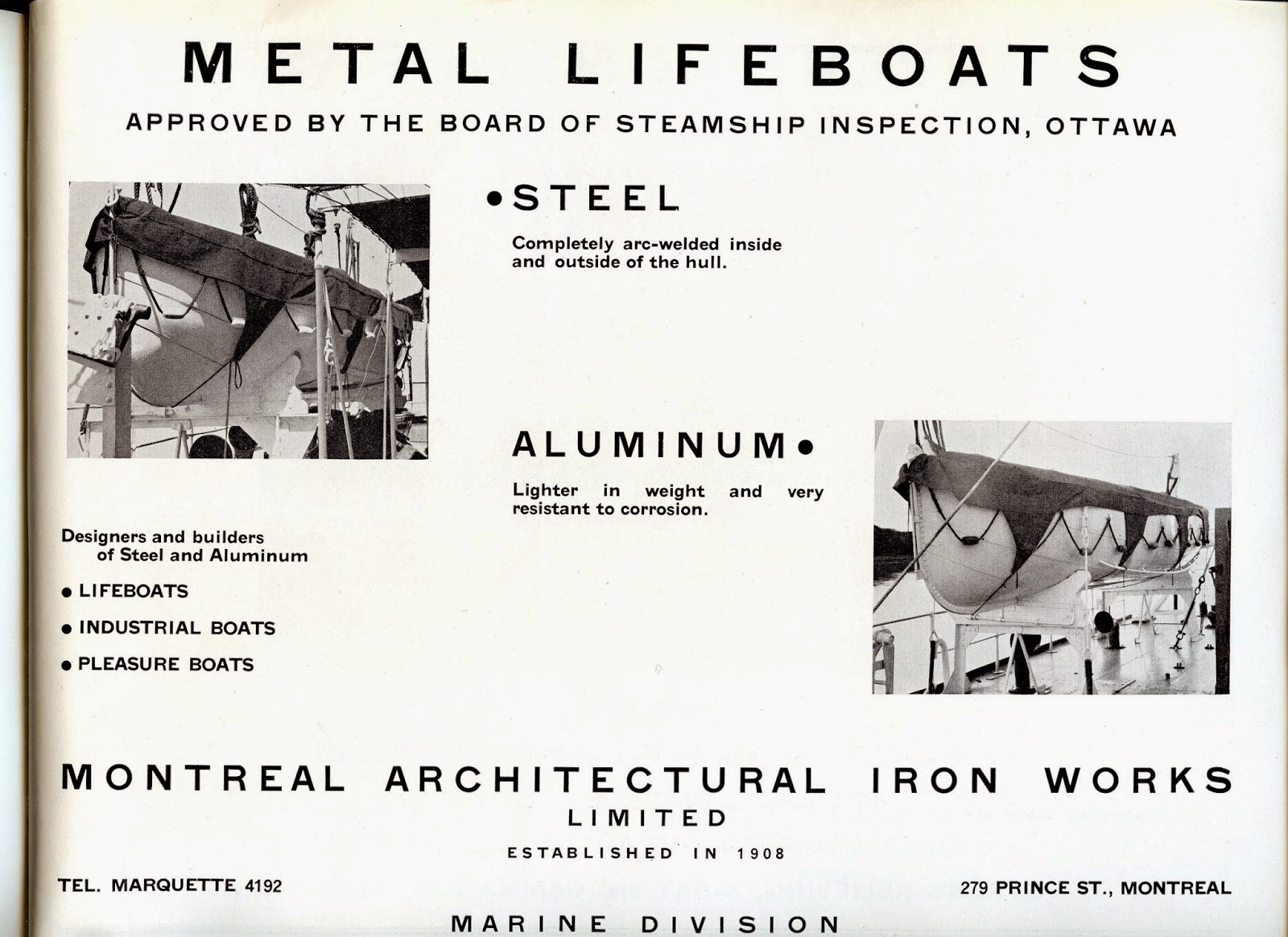 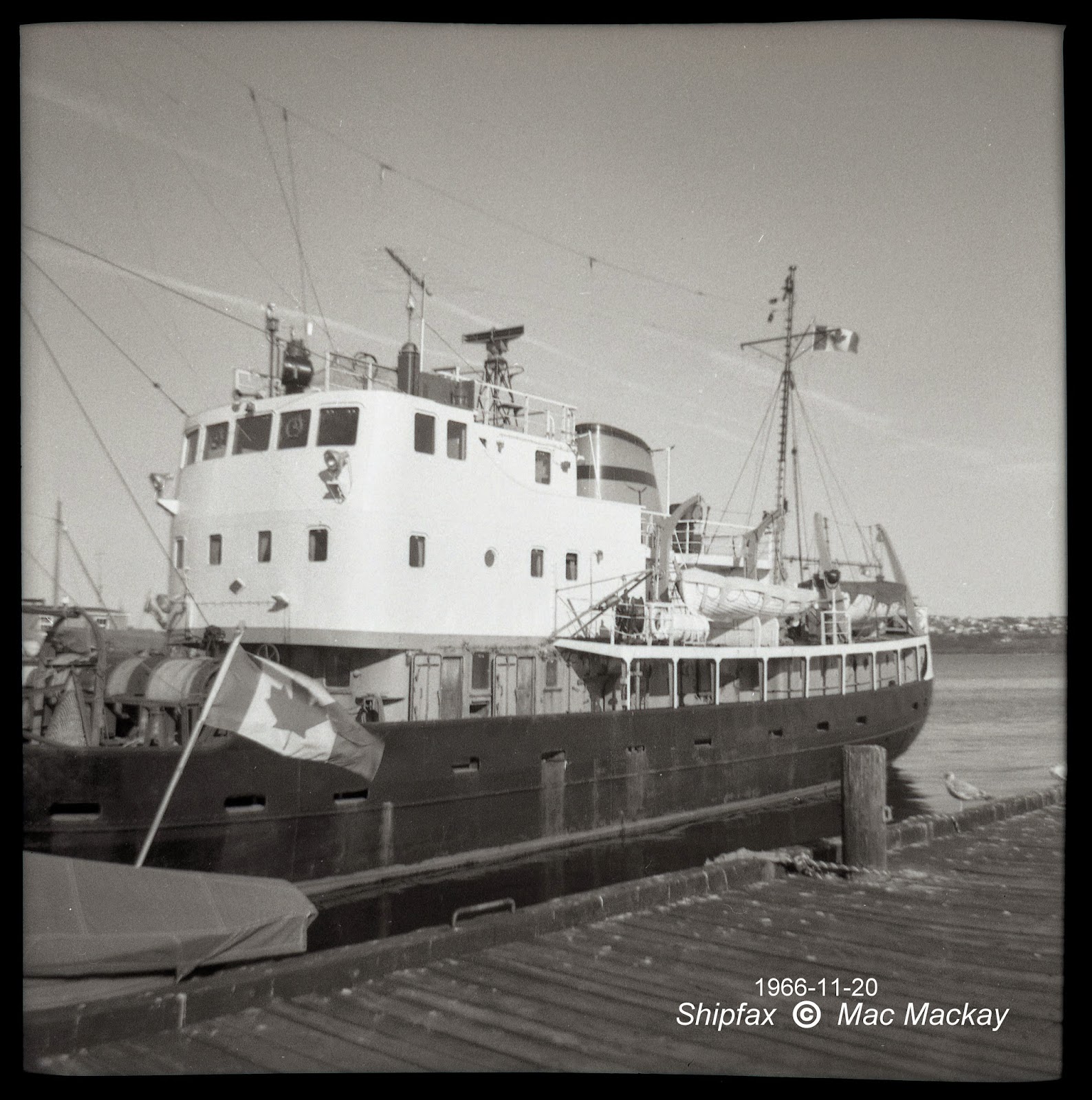 I was pleased to provide the owner with some documentation about the likely builder of the boat, and
the photos in this post. The one just above, shows a clinker built wooden skiff, and aft of that the port side lifeboat. There was a starboard side companion, but it disappeared during later conversions. Therefore the after most boat, just above the supervising gull, may well be the one that was restored to use.


Appendix
The Fisheries Research Baord in Halifax operated its own research "dragger" (local parlance for a wooden trawler, but which came to be used for all trawlers catching bottom fish). If you have seen C.D. Maginley's new book The Canadain Coast Guard Fleet you will see the boat as originally configured. As its name Harengus would suggest, it was initially used for herring research. It had its house amidships, a large open deck aft and a large derrick and wooden skiffs to handle the purse seine. Built in Shelburne in 1946, it was 84 ft long and measured 100 grt.
From 1946 Capt. Claude Darrach, OBE of Herring Cove, NS (appropriately enough) was master.
In the spring of 1954  it was rebuilt at the Dartmouth Marine Slip and now resembled a conventional wooden trawler, with cabin aft and crew forecastle forward. It was fitted for otter trawling with gallows on the port side. It served the FRB out of Halifax until the 1977 when it was sold to Robert W. Baker of West Green Harbour, NS and in 1979 to Pierce Fisheries Ltd of Lockeport, NS for commercial fishing. Its register was closed in 1986. 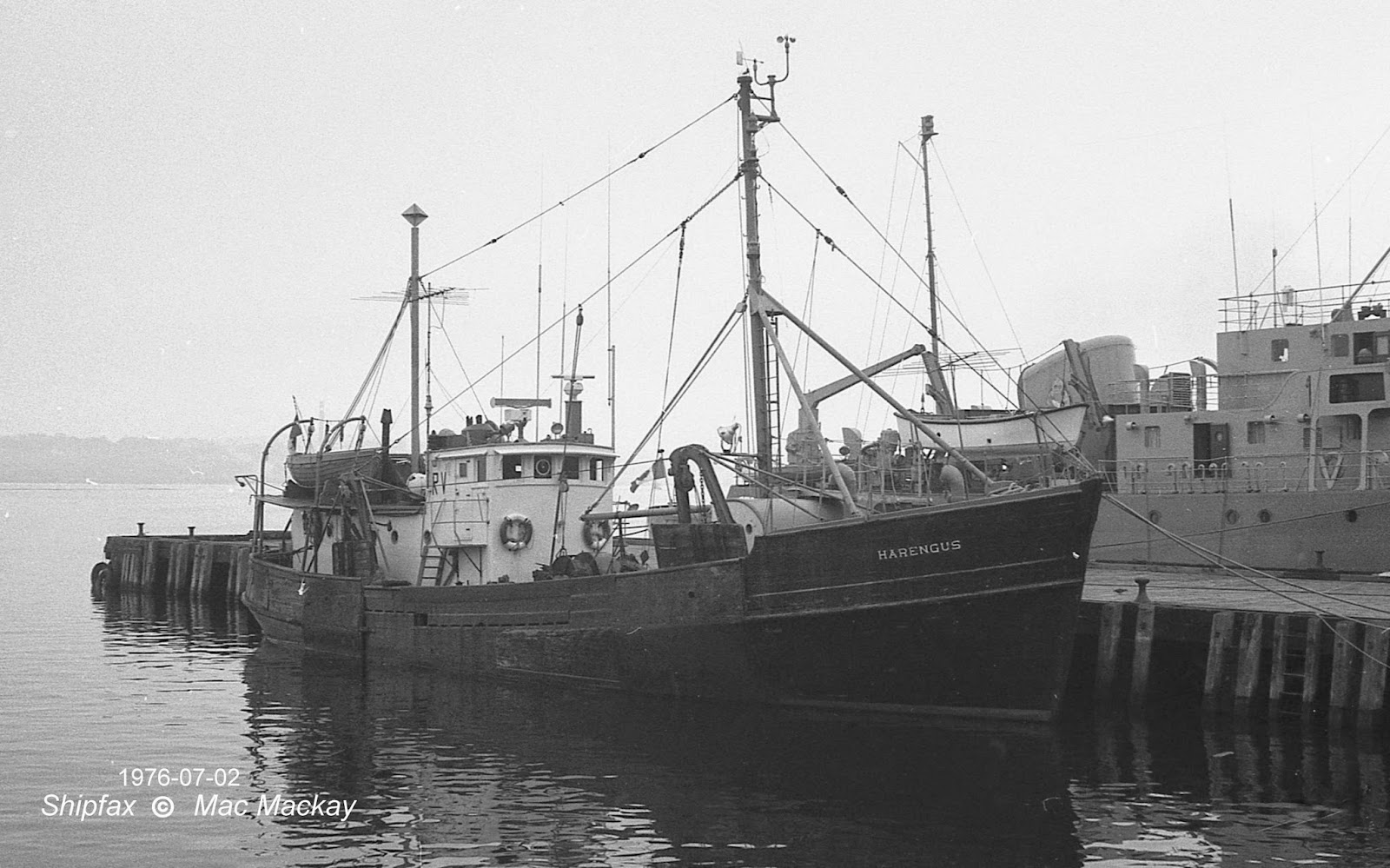 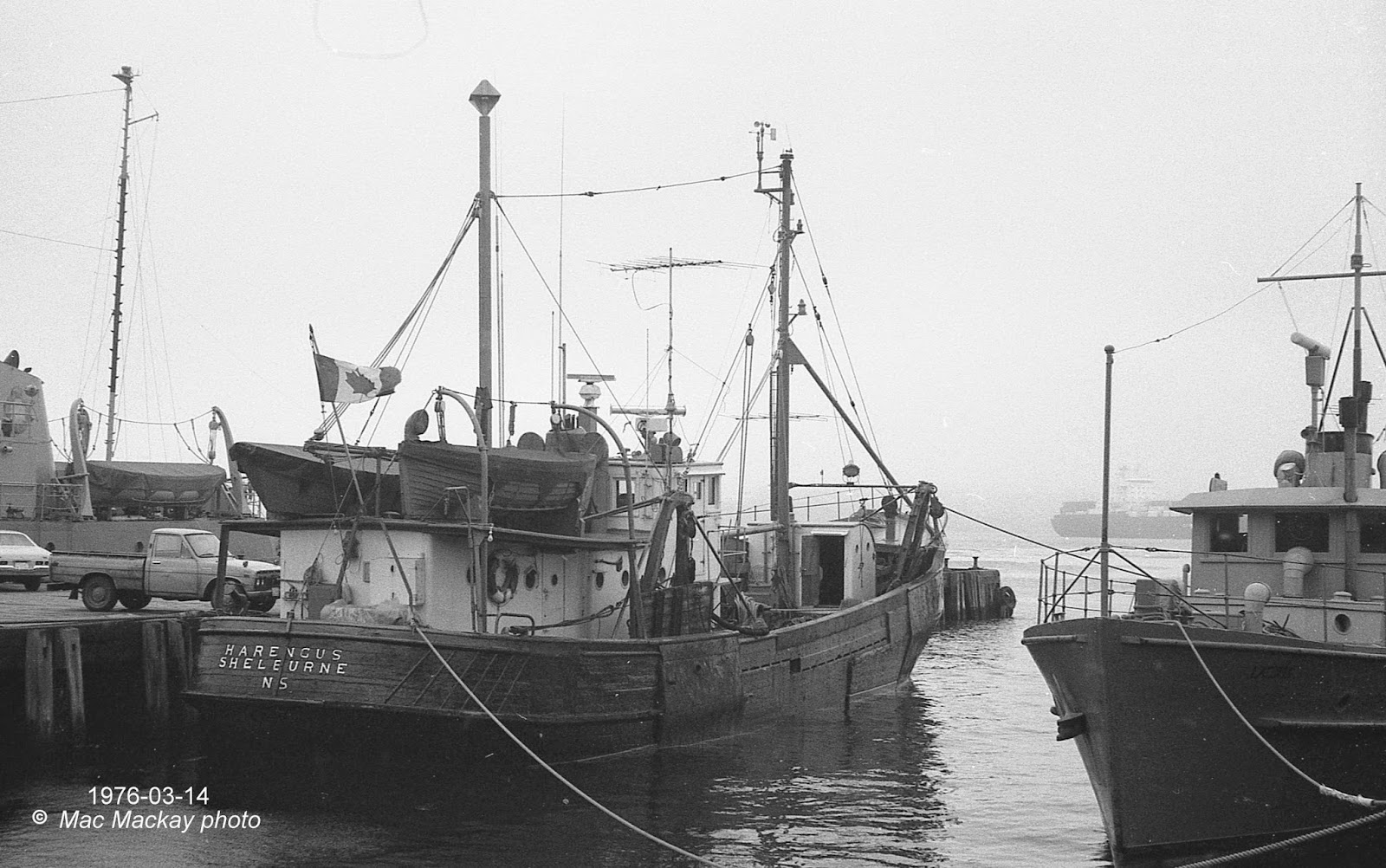 Harengus berthed amongst the Fisheries Protection fleet at Queen's Wharf in Halifax. Upper photo, with Chebucto (i), lower photo with Cygnus (ii) at left and Lacuna at right.