The veteran bulk carrier Catherine Desgagnés was met this morning on the St.Lawrence River below Quebec City by the tug Océan Henry Bain,. It appears to have taken the ship in tow off Ile-aux-Grues / Cap Tourmente, northwest of the downstream tip of Ile d'Oréans. By late morning they were stationary in the St-Michel anchorages area. By this evening they had reached Quebec City where the ship was tied up along side wintering fleet mates. It had been due to winter over in Montreal, but it appears that the voyage has been cut short.
I have been unable to find any details of the situation.


Catherine Desgagnés is a veteran ship, even by Canadian standards, dating from 1962. The Hall Russell shipyard in Aberdeen, Scotland produced the ship for Federal Commerce + Navigation and it began life as Gosforth, sailing under the British flag operated by Burnett Steamship Co Ltd. It generally traded into the Great Lakes with general cargo, but could also carry bulk. For this its hull was strengthened for heavy cargoes. The St.Lawrence Seaway had only opened in 1959, and the ship was built specifically to take advantage of that trade, but was also built just at the time that winter navigation to Montreal was made possible.  Although not built for work in heavy ice, it was sufficiently robust to trade early and late into the season.
Built with engines aft (that was a novelty for general cargo ship in 1962) it had four holds served by conventional derricks.

Thorold sailing from Halifax on a foggy July day in 1976.

In 1971 Fedcom / Burnett sold the ship to the Quebec + Ontario Paper Co and it was fitted to carry newsprint out of Baie-Comeau to the US east coast and Europe. It was renamed Thorold, the location of the paper mill owned by Q+O's parent company the Chicago Tribune. Pulpwood for the mill came from around the Great Lakes and the Lower St.Lawrence River at Shelter Bay (now Port-Cartier) and Franquelin. The company also owned the paper mill in Baie-Comeau which also supplied the Daily News in New York and the Washington Times Herald, running year round.
On back hauls the ship would carry bulk cargo such as grain and coal. Q+O owned the ship under its Trico Enterprises subsidiary, based in Bermuda, but the ship was registered in Canada.
It was a frequent visitor in Halifax with grain, taking gypsum as a back haul to Montreal or the Lakes. 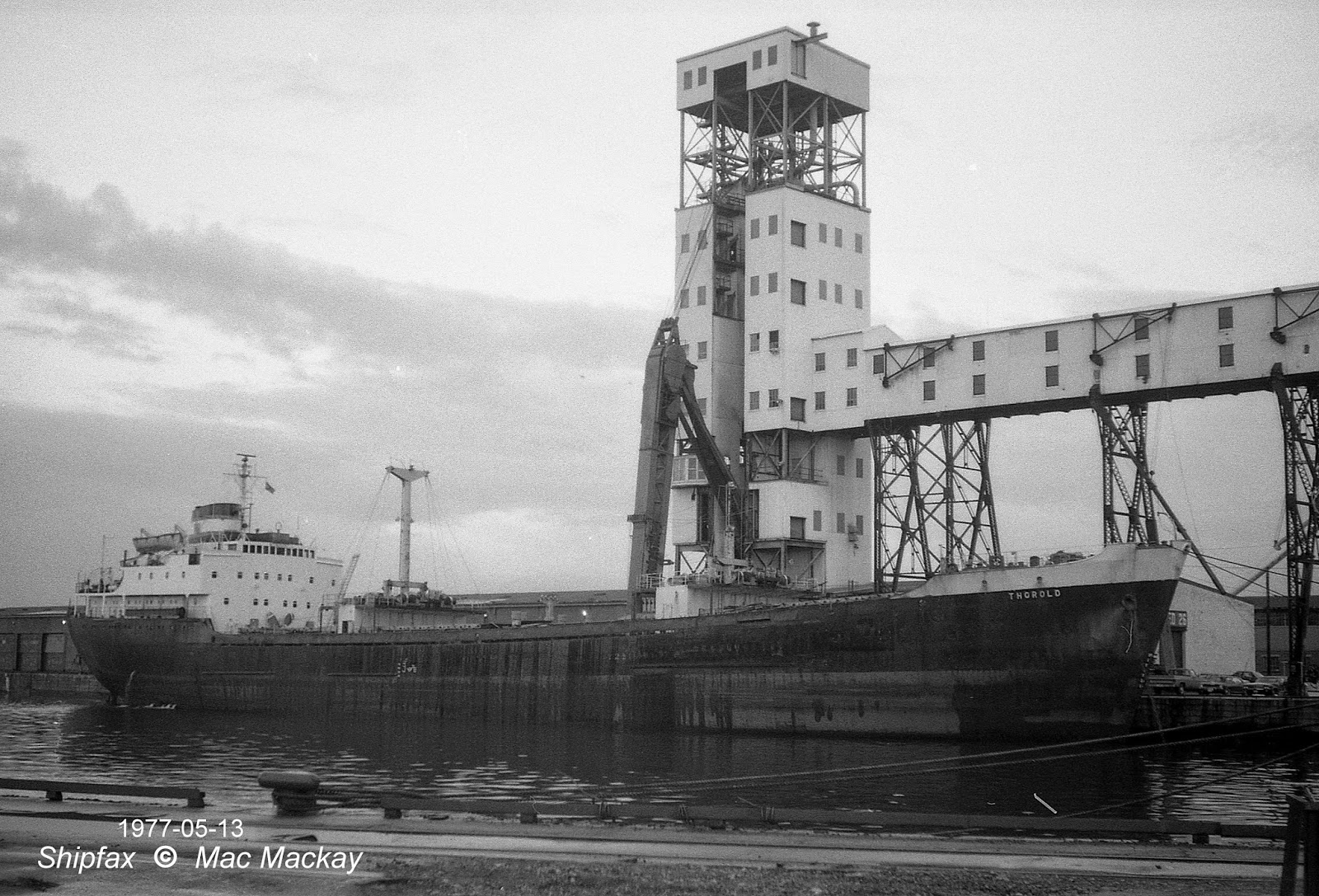 Unloading grain at the grain leg in Halifax in the spring of 1977. The ship lost its foremast earlier that year.

As a deep sea ship, often in Great Lakes trade, its depth got it into trouble on many occasions. Groundings were frequent, but rarely severe. However in 1977 the ship was trapped in ice off Anticoast Island for twelve days. On reaching Quebec City it was beset in ice and swept into the north abutment of the Quebec Bridge, carrying away is foremast in the process. Eventually its masts were removed completely as it shifted mostly into bulk trades with grain and various ores or pig iron as primary cargoes.
In 1983 Q+O ceased trading and Thorold was sold in 1984 to Les Armateurs du St-Laurent Inc. In 1985 it was transferred to Transport Desgagnés and became Catherine Desgagnés.

Catherine Desgagnés gets away from pier 23 in Halifax in 1990. It had loaded paper making equipment for Baie-Comeau after the foreign ship Faith had decided not to venture into spring ice in the Gulf of St.Lawrence, and unloaded in Halifax instead. General cargo voyages between Canadian ports was very rare even then.

Now operating mostly as a bulk carrier, it can be fitted with a 55 tonne crawler crane mounted on deck for working special cargoes, and when it was used in Desgagnés northern supply work, it may have carried the crane.

Early this season the ship was late in fitting out and was still idle in Quebec City into June. That is always a bad sign, particularly in a busy grain year, so the ship may be nearing the end of its useful life. Its longevity can be traced to its Scottish builders, its heavy construction, and reliable slow speed Sulzer engine.