Where Have All the ConRos Gone - Part 5

It seems that almost everyone in the shipping business tried to get in on the Con-Ro game. Some were more successful than others. Some of their ships ran in to problems too.

Hellenic Lines
Even though privately owned by Grigorius Callimanopoulos, son of Pericles, the founder of the company  (in 1934) Hellenic Lines was the national flag carrier of Greece. It was best known for its general cargo ships, especially the iconic SD14 standard ships, built at the Greek government owned Hellenic Shipyards Co in  Skaramanga. These ships were not built as container carriers by any means, though they did have to carry them, so Hellenic Lines dove into Con-Ros.

The SD14 Hellenic Champion, built in 1971 was a basic. low cost, general cargo ship of standard design, developed by Austin+Pickersgill in the UK, for London based Greek owners and also  licensed for construction in Greece. It lasted until 1991 when it had contact with another ship in Chittagong outer anchorage, then received further damage in a cyclone. It was broken up in June of that year under the name Bipasha. 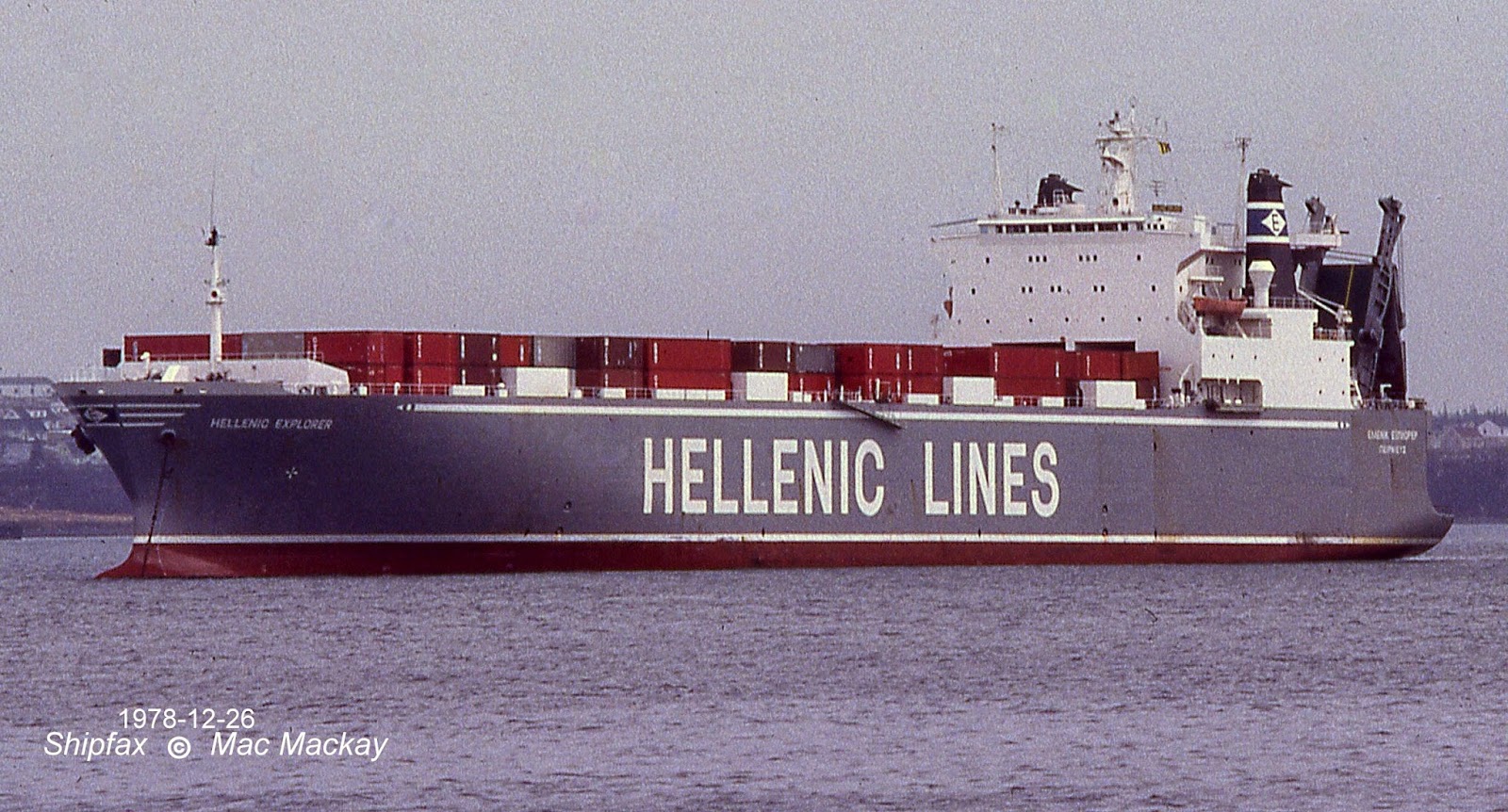 Hellenic Explorer, delivered by Sasebo Heavy Industries in Japan in 1978 had a 1107 TEU capacity, and could carry 1407 cars via a stern slewing ramp. It also had berths for 12 passengers.

Unfortunately Hellenic Lines went into deep debt, from which it could not emerge, and was bankrupt by 1984. Its ships were dispersed with Hellenic Explorer becoming first C.Explorer for a holding company until it could be sold for trading, then in 1985 Jolly Rubino for the Italian flag Ignazio Messina. It came to prominence September 11, 2002 when it caught fire off Richards Bay, South Africa and drifted ashore near Cape St.Lucia in a UNESCO World Heritage area. Salvors removed pollutants and broke up its hull (partially) with explosives, but the wreck remains a landmark on the coast.
See the video:   https://www.youtube.com/watch?v=41_p-ogkwV4


Sea Containers
Once the darling of the shipping world, Sea Containers was founded by a US citizen, based in Bermuda, but headquartered in London. At is peak it owned, among other things, ships, ferries, hotels, newspapers, railways and even the Orient Express train. Its 50/50 joint venture with GE Capital, called GE Seaco was one of the largest owners of containers in the world. They did not operate a major container line, but acquired numerous feeder ships, bought for cash at low price and thus debt free. They faced collapse more than once, but went into bankruptcy finally in 2006.

One of those brushes with failure was in 1986, when several of the ships were sold. One was the pictured vessel, built in 1976 by Shinama Dockyard Co in Ana, Japan, and at 3391 grt was among the smallest of Con-Ros at 318 TEU. Originally chartered to Maersk as the feeder Maersk Tempo, it became Merzario Ionia in 1976 and Strider Australia in 1978. At that time it carried a 38 tonne crane. For a brief time between 1985 and 1986 it was renamed A.E.S. Express for a failed feeder service, and reverted to Strider Australia, in 1986 and was soon sold to Taiwanese owners as  K.H.Enterprise. It was under that name that it sank off Hong Kong March 11, 1987, following a collision with the 40,980 grt container ship Oriental Faith. By coincidence that ship was a Halifax caller, both for Orient Overseas Container Line, and later as OOCL Faith when the line rebranded its ships with the OOCL name in 1989.

It was built in 1987, by Mitsubishi Heavy Industries in Kobe as the fifth in the Freedom class of 2829 TEU container ships. The capacity was upped to 3109 when a third tier of containers was loaded. It arrived in Halifax for the first time June 10, 1987 9having missed it first trip due to the above accident), and continued to call here for several years on the NOL / OOCL / K-Line nine ship, round-the-world joint service that started in May 1987.

After three years in charter work as Veracruz and TMM Veracrux from 1996 to 1998 it returned to Halifax as OOCL Faith. By then OOCL had joined in an arrangement with HAPAG-Lloyd, and the ships capacity had jumped to 3161 TEU or more, as it loaded up to four tiers. It was renamed Faith and sold for scrap in China in 2009.