I don't know when the last classic tanker called in Halifax. By classic, I mean engines aft, and island bridge   near midships. These tankers were sometimes called three islanders, since only the forecastle, bridge and funnel aft were visible at sea when hull down. They were the standard form of tanker until the 1960s. Very quickly the idea of all accommodation aft took hold for tankers and bulk carriers, and the island bridge ships began to disappear.
It was probably the very late 1970s or possibly the early 1980s when the last three islander arrived here. I managed to catch a few of them in their last days.The explosive growth in size of tankers at that time also doomed most of the three islanders. 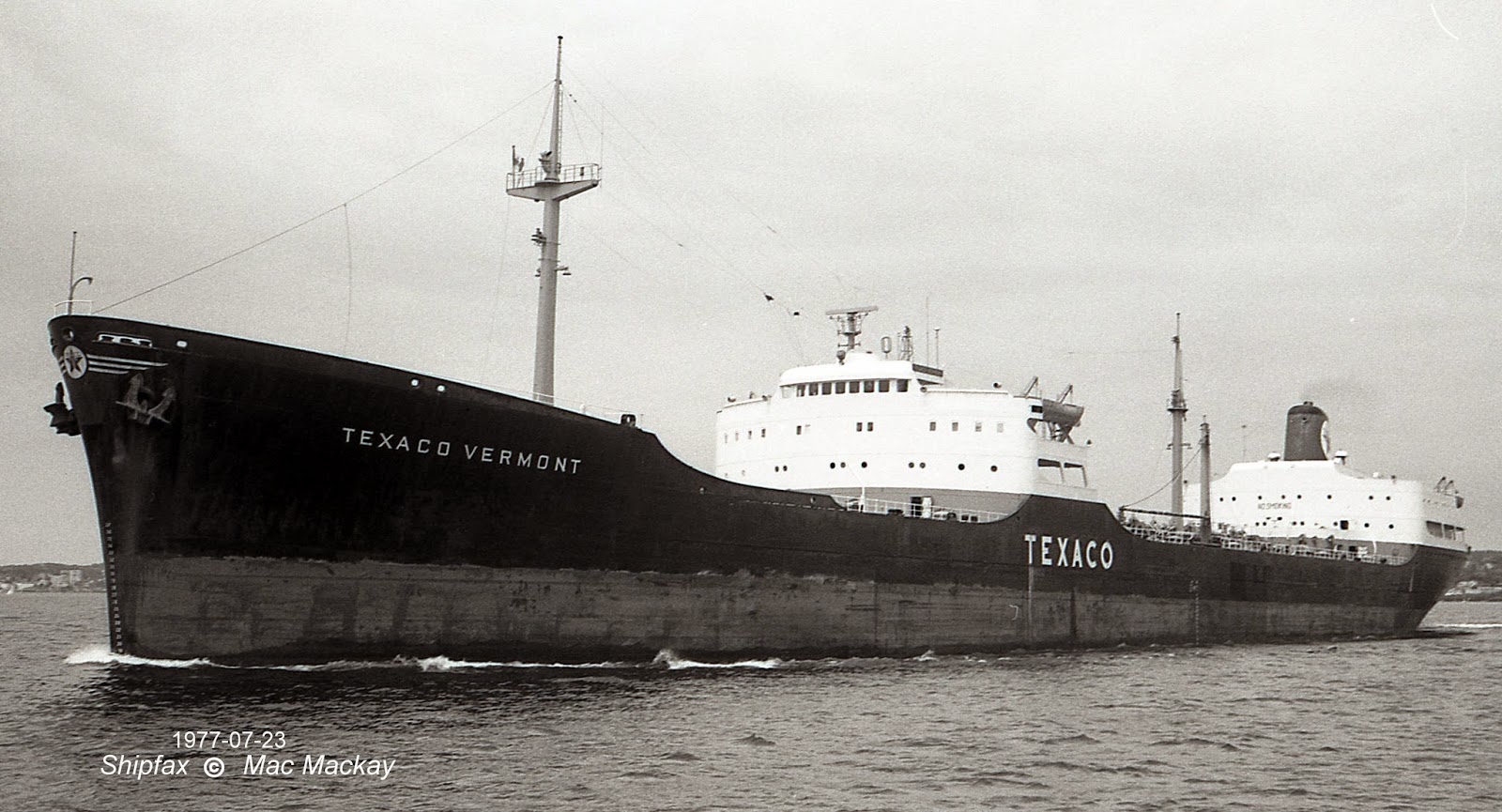 Texaco Vermont , built in 1956 by Deutsche Werft, Hamburg as Vermont measured 18,428 grt 27,710 dwt. The steam turbine powered ship was one of an immense world wide Texaco fleet - there was a tanker named after every state, and most major cities- and was renamed Texaco Vermont in 1960.It lasted until July 1980 when it was broken up in Kaohsiung, Taiwan. The ship was a regular caller at Texaco's refinery in Eastern Passage (later Gulf) and now a storage facility only for Valéro (Ultramar).

Not to be outdone Esso also had a huge fleet too. Esso Esen was typical of the ships that fed the Halifax refinery. Also German built, by A.G.Weser in Bremen, and a steam turbine ship, it was significantly larger at 31,685 grt, 48,535 dwt. Dating from 1960 it was broken up in Kaohsiung in 1978. 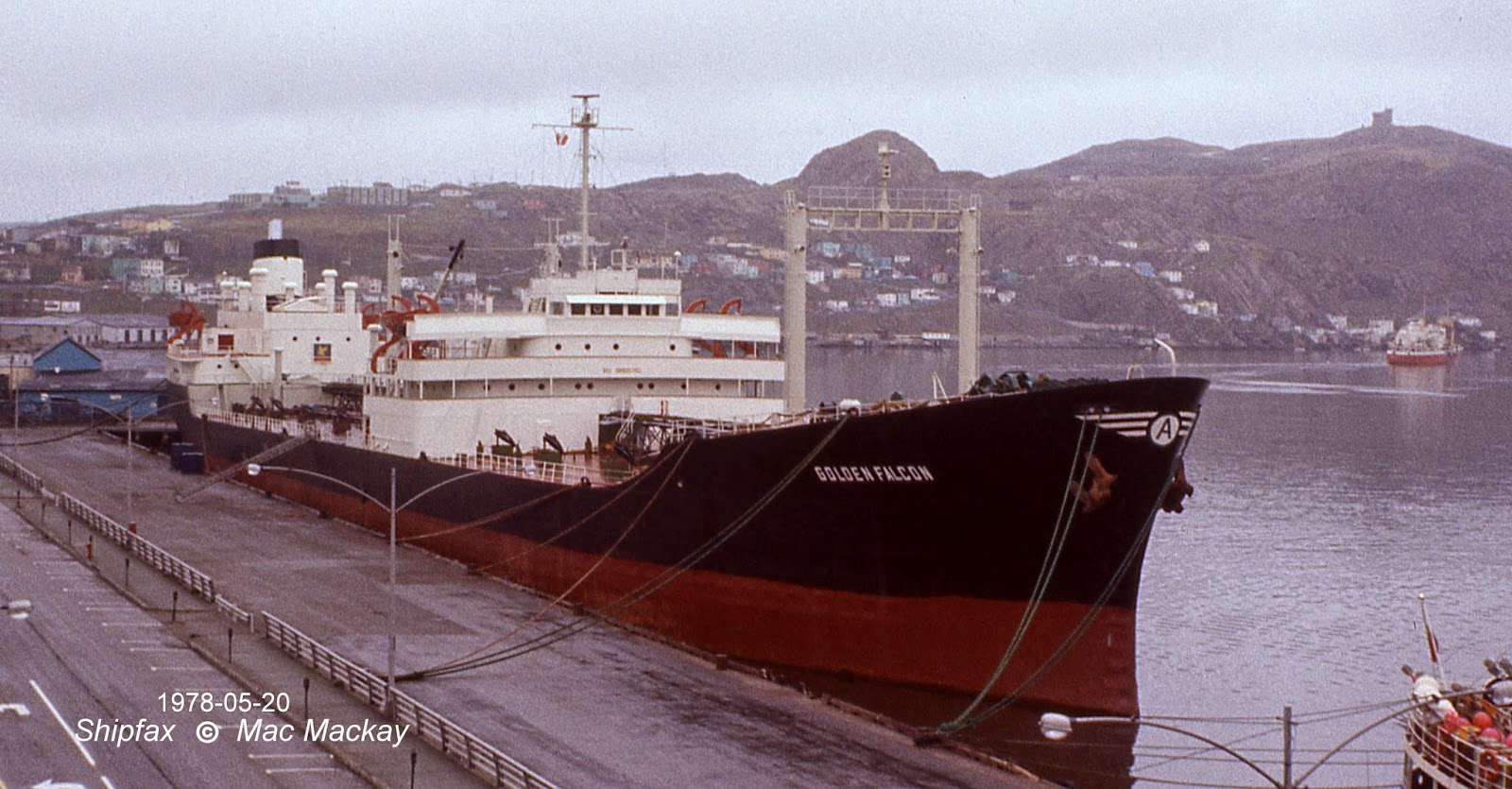 Built in 1954 by Cammell Laird+Co in Birkenhead, UK, as Stanvac India , this 17,297 grt, 26,638 dwt steam turbine powered vessel was a fine example of the the early post war British three islanders. Its owners, Standard Vacuum Transportation Co Ltd were rebranded by parent Mobil oil in 1962 and the the tanker became Mobil Light, still under British flag. However bigger tankers were needed and it was sold in 1964 becoming the Liberian Elaine until 1966. It then began trading to Newfoundland and Quebec as Golden Falcon. In 1978, when  it would normally be sent to scrap, it was instead moved to Holyrood, NL where it was used as a wharf extension. In 1988 it was towed to Castellon, Spain for breaking up. I managed to get a photo while it was laid up in St.John's waiting to be moved around to the head of Conception Bay. 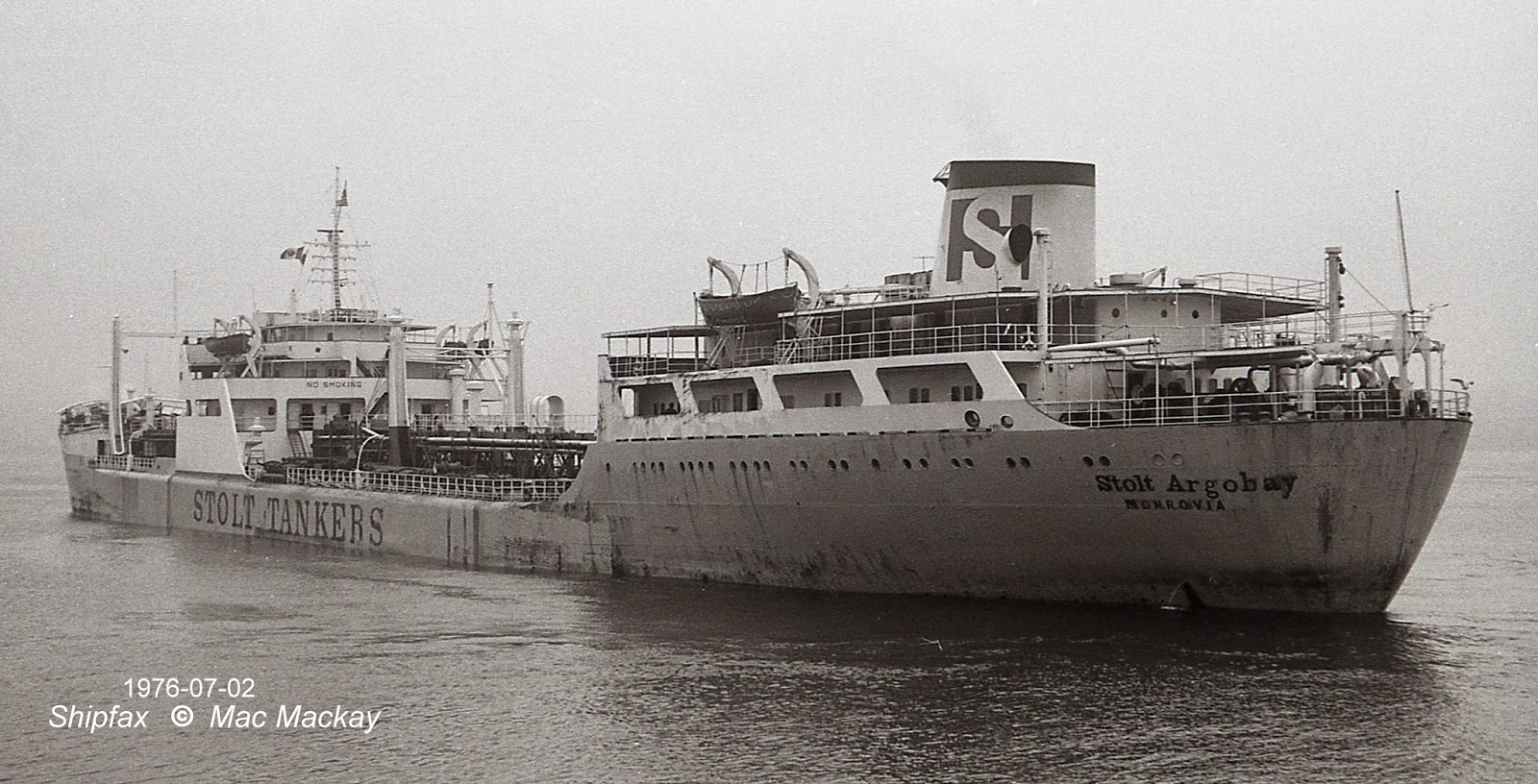 Although of traditional three island design, Stolt Argobay was a motor tanker, built in 1960 by A/S Bergens M/V of Norway. Originally called Osthav, it became Stolt Hawk in 1968 and Solt Argobay in 1973. Stolt specialized in parcel work, with their tankers carrying many different cargoes in several tanks, and working their way around the worlds on demand. The ship is shown sailing from pier 20 in Halifax where it either unloaded molasses or loaded tallow.  The ship lasted until 1984 as 78: Stolt Filia, 80: Filia, 81: Stolt Filia, 81: Serenitas, 83: Indiano. It arrived in Barcelona December 12, 1984 where it was scrapped.

Canada had its own small fleet of traditional style tankers, including this one, which had an unusual career.
It started life in 1952 in Collingwood, ON as B.A.Peerless for the British-American Oil Co Ltd. It was one of four tankers, three others for Imperial Oil, built to carry Alberta crude oil from Superior, WI to Sarnia, ON for Esso and Clarkson, ON for B-A.When the pipeline was extended to Sarnia, the ships were not needed for their original work, and the other three were converted to bulk carriers. B.A.Peerless took another route however and went to Port Arthur Shipbuilding in 1958, where it was shortened 70 ft to 540 ft loa and strengthened for ocean work. It then exited the newly built St.Lawrence Seaway and began running costal and deep sea, often to Venezuela and back into the Lakes. It was a frequent caller in Halifax where B-A had a depot in lower Burnside, near National Gypsum.
In 1969 Gulf Oil took over B-A and the ship was renamed Gulf Canada while in drydock in Halifax. In 1984 Gulf sold the ship to Coastal Canada Marine Inc, and it was renamed Coastal Canada (also in Halifax). It remained in coastal work until laid up in Halifax  January 2, 1989. On December 19, 1989, and renamed Coastal I under St. Vincent and the the Grenadines registry, it left Halifax in tow of the Russian tug Gigant and arrived in Alang March 22, 1990 for scrapping.

Leaving aside coastal tankers - and there were many Canadian ones with island bridge, both Imperial Oil and Irving Oil operated large three island tankers. Regrettably, my camera never had the opportunity to capture any of them in their original form.

Next - the last bastion of three islanders.