Where Have All the Con-Ros Gone -Part 1

The handsome new Con-Ros operated by The National Shipping Company of Saudi Arabia will be joined later this year by new Con-Ros for the Atlantic Container Line (sorry, no so handsome) but they are the only lines calling Halifax that still operate these unique craft. At one time there were at least six Con-Ro lines serving Halifax, but most of them have foresaken that market niche altogether.

Blue Kobe appears to be a fairly conventional cargo ship, carrying some containers, a common sight in the 1977 before container ships took over cargo work. 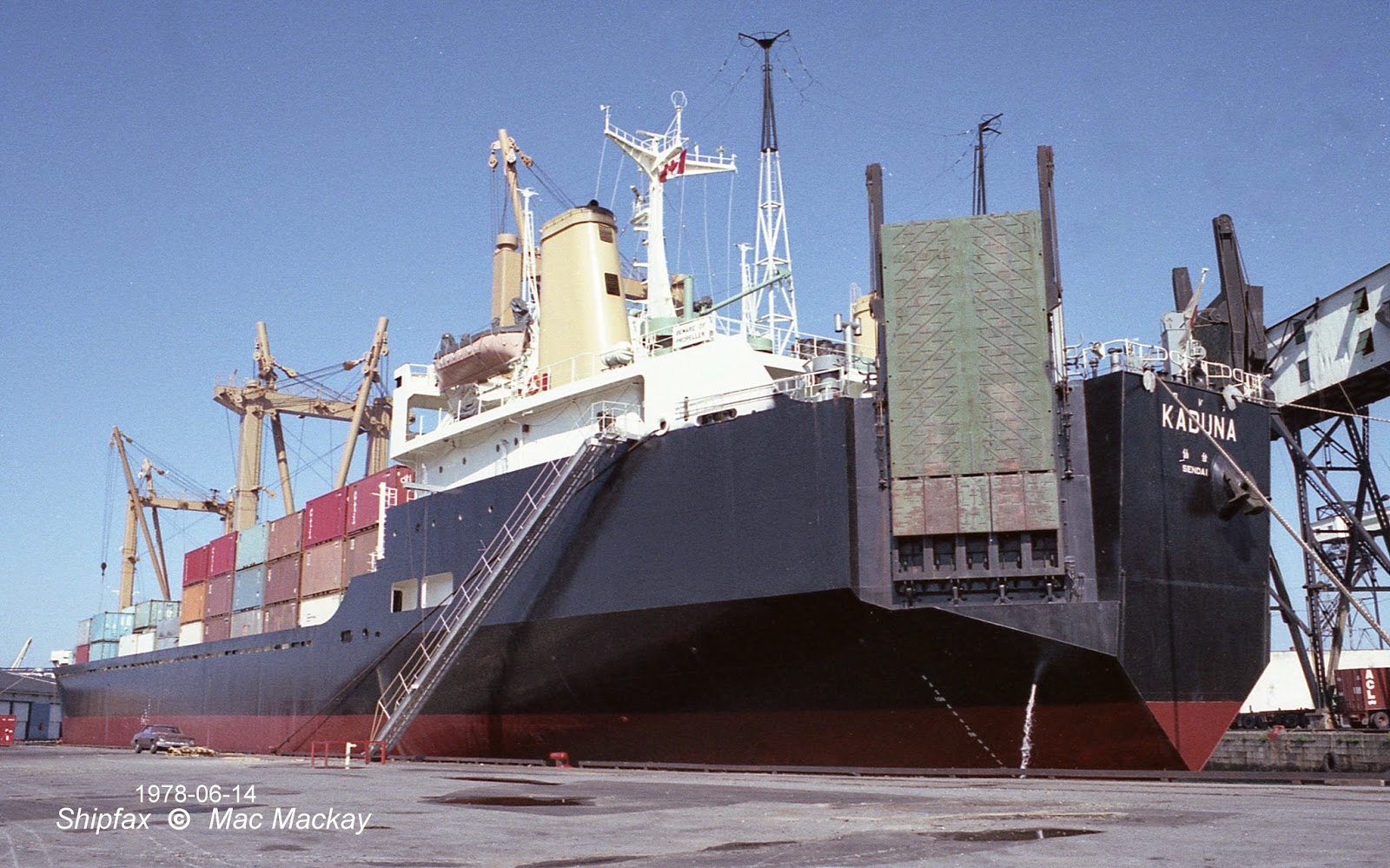 The next year, when the ship had changed its name to Kaduna, it was back again at pier 23, showing off not one but two stern ramps -one on each quarter. A small amount of garage space was apparently provided at deck level, and there was access directly to the main deck.

Kaduna ex Blue Kobe was built in 1976 by Kanda ZKK, Kure, and had two 60 tone and three 20 ton derricks. Interestingly Lloyd's Register makes no mention of its stern ramps. In 1982 it was renamed Seki Rolette and was the victim of a famous collision 33 miles off Bremerhaven. It was struck by the container ship Choyang Moscow and sank in the main channel with the loss of five crew. The raising of the wreck and the resultant changes to German traffic routing schemes and vessel traffic management make interesting reading if you can bear the indifferent translation from the German provided by the internet. http://de.wikipedia.org/wiki/Seki_Rolette

The next generation for Sekiyo was Seki Rokako.Built in 1979 it was a multi-purpose ship. 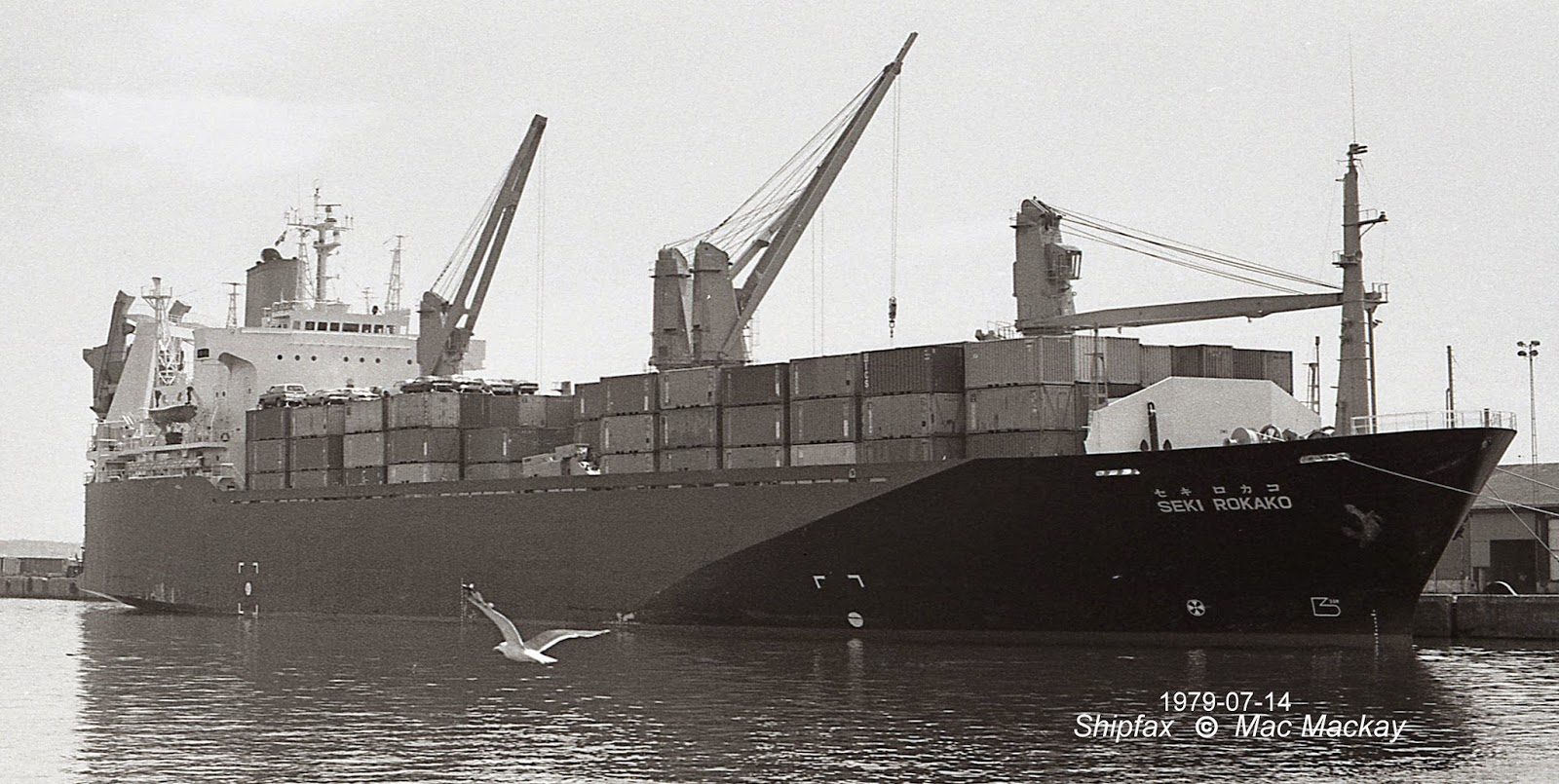 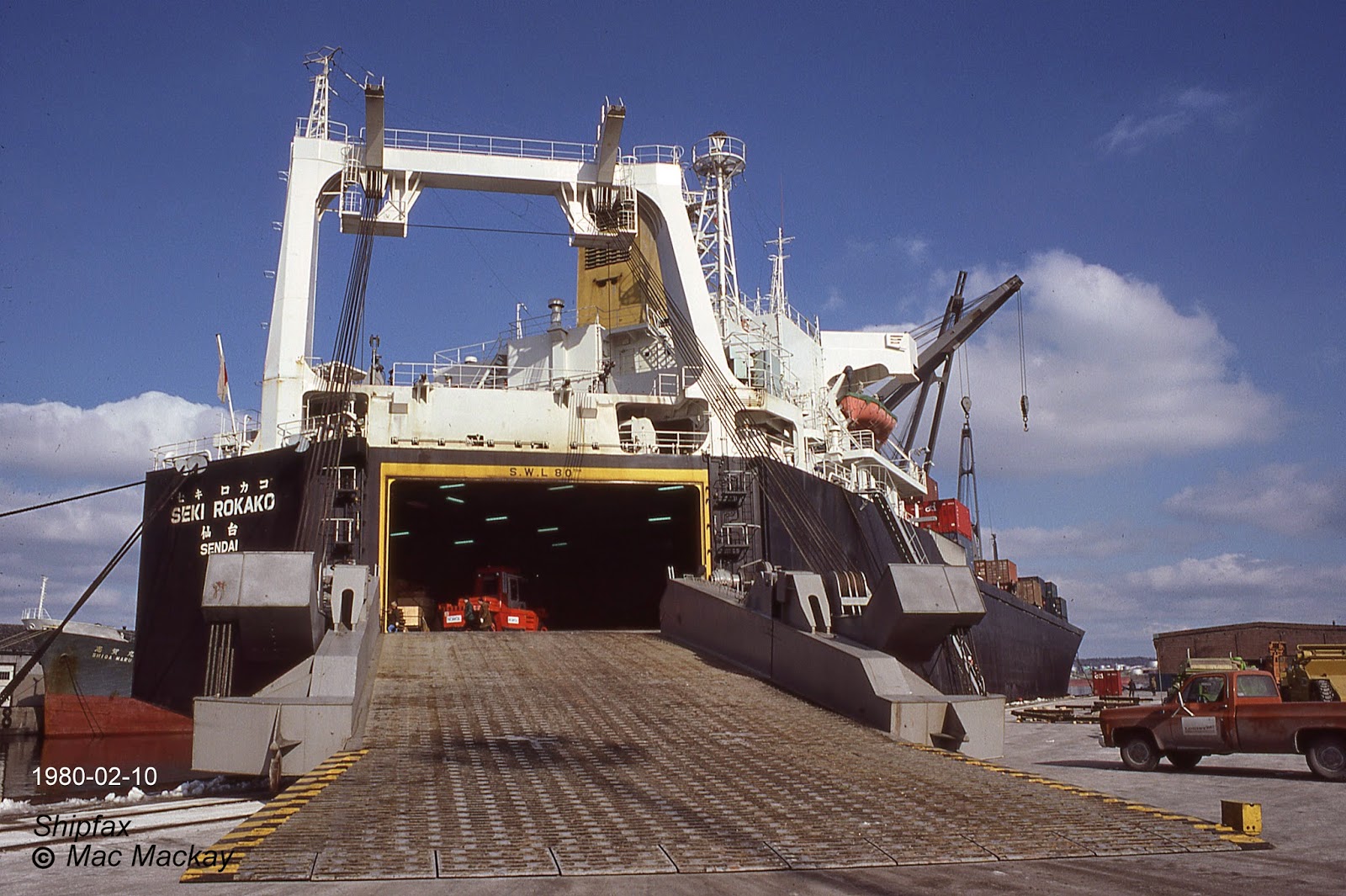 In addition to its 645 TEU (305 on deck) capacity, it could work general cargo in four hatches with two 30 tonne and two 25 tonne cranes. It had an 81 tonne capacity stern ramp, and 1634 lane meters of RoRo capacity. Even that wasn't enough sometimes -see the cars sitting on top of containers in the upper photo. It only lasted five years with Sekiyo, but after renamings as 84: Eastern Unicorn, 90: Tarkwa , it found its niche in 1995 with Seaboard Shipping of Florida as Seaboard Star in Caribbean Con-Ro service.It was then rated for 103 trailers and had 6 passenger berths for drivers. It was broken up in Alang in 2012.

Among the earliest adapters of the Con-Ro concept, the Saudi Arabian company continues to combine containers and Roll On-Roll Off on the same ship. Their first ships were really jumped up ferries such as the Seaspeed ships, which carried RoRo below decks and in the open on the top car deck sharing space with stacked  containers..

It was sold to the US government in 1993, renamed Cape Rise for the National Defense Reserve fleet and has been in Ready Reserve status at Portsmouth VA since 2001.


In 1983 NSCSA took delivery of four big Con-Ros built by Kockums AB in Malmo, Sweden. Scandinavian companies were in the forefront of the Con-Ro business in the 1980s with Brostroms, ACL, Wilhelmsen and Hoegh all ordering these ships. In 1984 alone 11 new Con-Ros of over 2,000 TEU were delivered. MacGregor-Navire, also a Scandinavian company, was the developer of the stern ramp and container cell guides. Unfortunately the shipping industry in Sweden particularly was in freefall and Kockums and other Swedish yards were taken over by the government and many built their last ships between 1984 and 1989.

Saudi Diriyah, and four sisters, built in 1983 in Sweden served their entire careers with NSCSA.

It was renamed Diriyah for the delivery trip to the breakers in Alang in 2013.


The ships were rated for 2310 TEU including 50 reefer, all carried on deck, and 534 cars. The 400 tonne capacity stern ramp allowed them to carry heavy machinery in the full length car deck. When the ships were  retired in 2013, they all went directly to the scrappers in Alang.

NSCSA supplemented these ships for a time with two former Polish Ocean ships (more about them in a later post.) 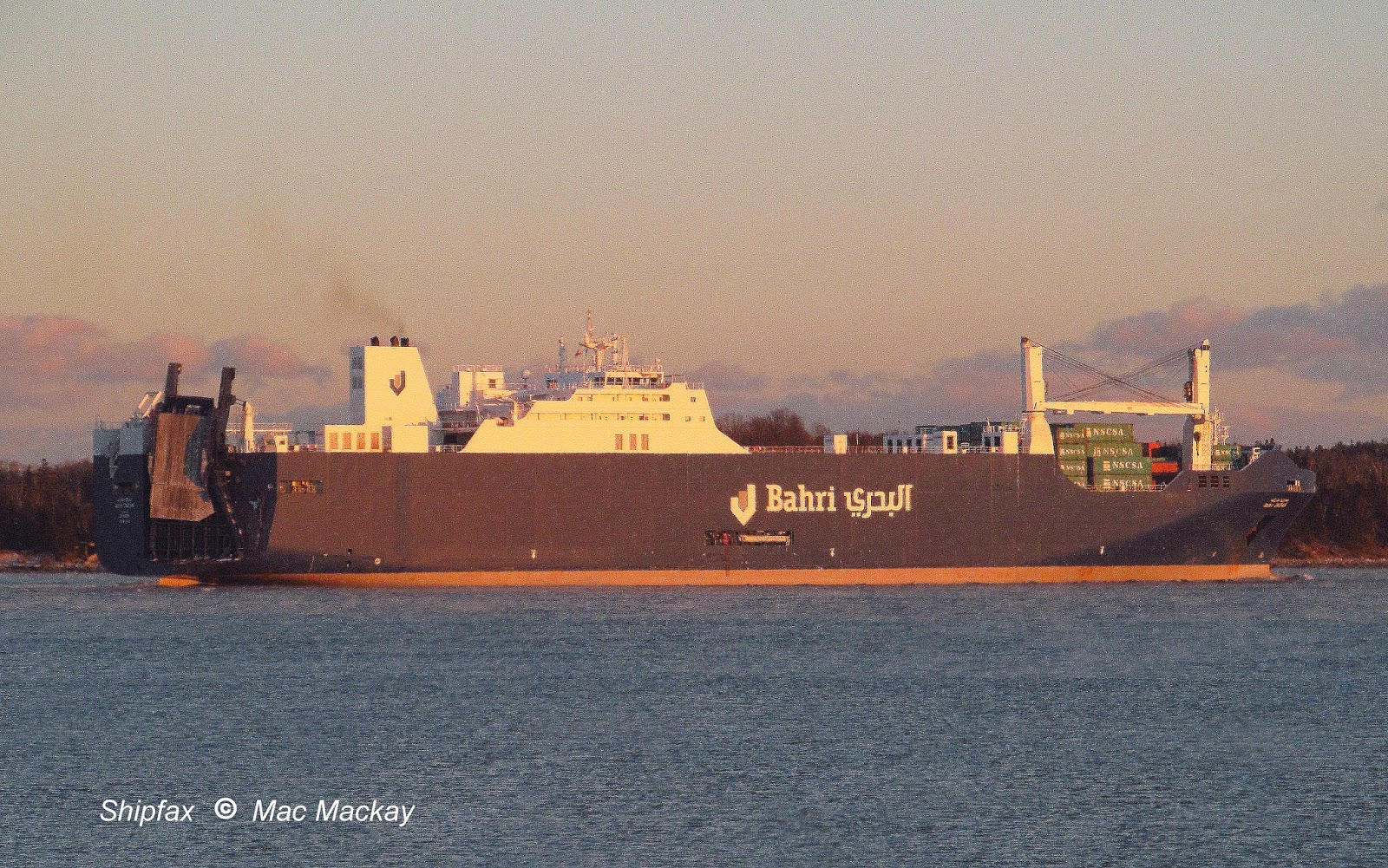 Bahri Jazan sailing from Halifax January 8 is #4 in the series of six new Con-Ros, delivered in 2013. NSCSA rebranded itself Bahri at the same time, and the hull colour changed from green to blue.

Built by Hyundai Mipo, they carry only 364 TEU, all on deck forward, and they have two 240 tonne cranes for general oversized and heavy lift cargo. They have enhanced RoRo space of 24,000 m3. Due to the predominance of RoRo space, they are also now termed as Ro-Cons, rather than Con-Ros.

How about a bit of irony? A huge shipyard crane, built in the early 1970s dominated the skyline of Malmo, Sweden and signified the city as a shipbuilding hub. After turning out the Saudi ships and many others, the yard was converted for submarine construction only. The crane was sold - for $1 (US) - to none other than Hyundai, Ulsan. When the crane left Malmo, many citizens wept to see it go since it signified the end of a major employer. The Koreans have named the crane - Tears of Malmo.

For more on the crane see: https://www.google.ca/#q=kockums+crane