The recent visit of HHL Mississippi was the prelude to a heavy lift, coming up sometime soon. The spreaders that the ship left behind are stored on pier 28 where they can be picked up by another heavy lift ship.

The 270 tonne spreaders are just the right capacity to lift the new CCG patrol boats.

The purpose of that visit, I assume, is to load the two Canadian Coast Guard Hero class mid-shore patrol boats to be delivered to the west coast. The last two of the Irving Shipbuilding boats, M. Charles M.B. and Captain Goddard M.S.M. are lying at the Bedford Institute awaiting transport.
The Department of Fisheries and Oceans issued a Request for Proposal (DFO FP802-140006) to lift the boats between November 1, 2014 and September 30, 2015. The boats are to be loaded at BIO and delivered to Victoria, BC (or environs) and the contractor is responsible for all aspects of the move, including lifting on, stowing on cradles on the ship and lifting off at destination.
The RFP gives the displacement of each boat as 230 tonnes light ship, but somewhat  more in their present condition, loaded with gear.
Among the other interesting aspects of the RFP is that the boats may be unloaded in Puget Sound, as were the rescue lifeboats some years ago. Would the ship still require a coasting license, since it would not be transporting the boats between Canadian ports? I have not seen a coasting license application yet, so perhaps that will be the case. The contractor is forbidden from activating any systems on the boats, nor towing or sailing them. If they are off loaded in Puget Sound CCG crews will take them over once they are in the water.
The RFP also states that the boats cost $25mn each, but replacement value would be considerably more. The original price publicized for the boats (9 boats for $194 mn) works out to $21.5 mn each. Could the additional $3.5mn each be accounted for by CG installed equipment? Seems high. So where did the extra $31mn in total come from?

HHL Mississippi had an interesting trip to reach Halifax. 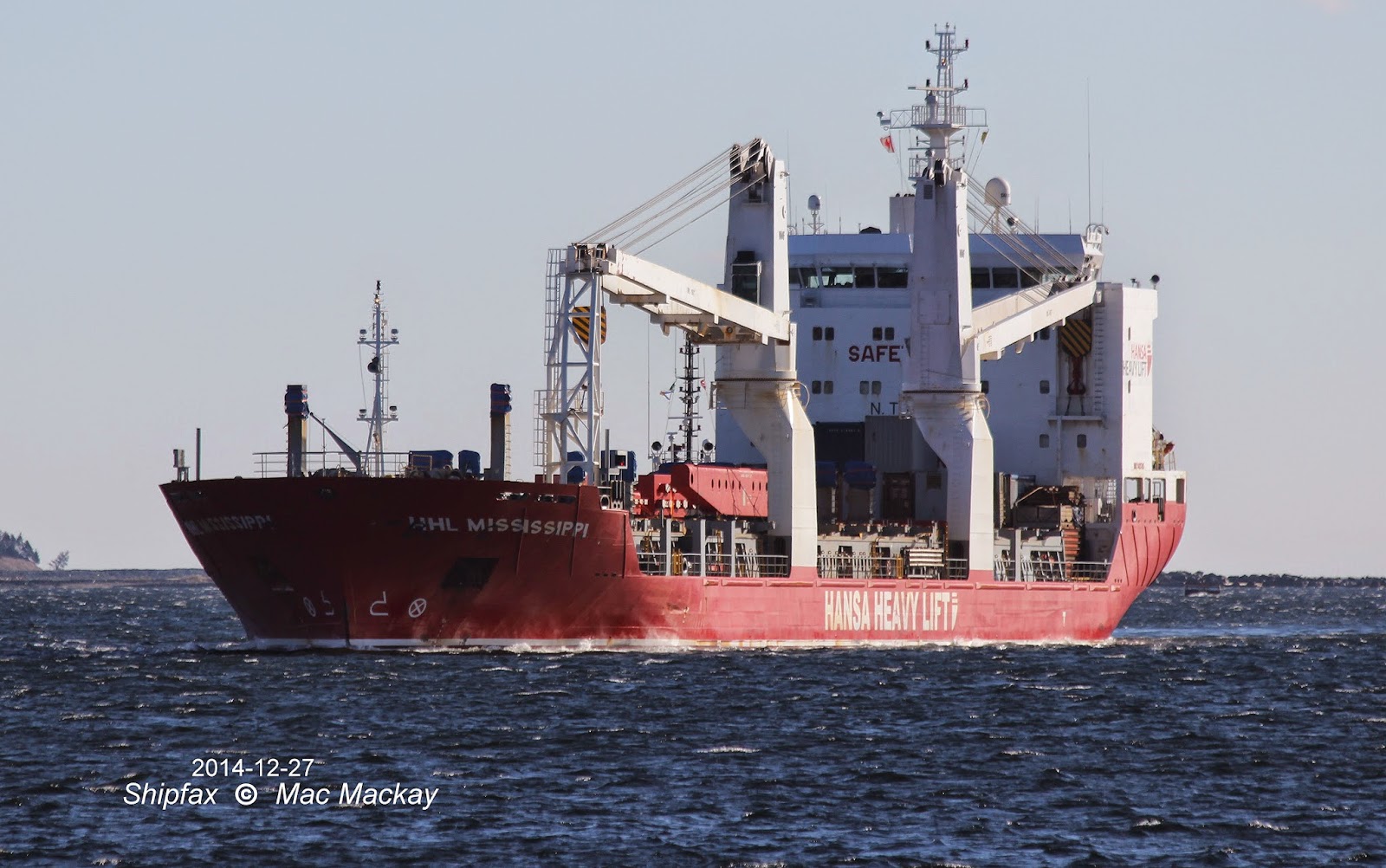 It was first reported at Escoumins, QC December 6, was upbound in the Seaway December 8 and arrived in Chicago December 15, where it unloaded some cargo.  It sailed in Ballast from Chicago December 16 and was down through the Seaway December 21. There were numerous delays in the Welland Canal and Seaway due to the end of season rush of traffic waiting to get through, and the ship spent a few days anchored both upbound and downbound.
When it arrived in Halifax December 27 it certainly appeared to be well ballasted down, so it is possible that it took on some cargo between Montreal and Halifax. The spreaders were presumably on the ship all along, or may have been loaded in Chicago. They appear to be brand new and unused. After unloading the spreaders here the ship sailed for Lake Charles, LA later the same day.
Its lifting capacity is an impressive 360 tonnes using both cranes combined, so it would certainly be capable of lifting the patrol boats, so it may return, or one of its sister ships.