Where Have All the Con-Ros Gone - Part 3

Bullaren, was built in 1979 by Gotaverken, Arendal , Norway for Rederi A/B Transatlantic [RABT], which, at the time, was owned by Brostroms, also of Sweden. It was nominally transferred briefly to its Swedish America Line as Vindafjord in 1981, then chartered out, I think to Wilhlemsen, in 1981 as Tarifa, then returned to RABT operation in 1983 as Bullaren. In 1984 it was sold to Cie Navale Transatlantique as Saint Roland, to Eburnea as Grand Basssam in 1992, then to SCAC Delmas Vieljeux in 1995 as Robert Delmas, renamed Robert then Roxane Delmas the same year and ended up in 2005 as Marienborg for Wedellsborg (Nordana). It finally arrived in Alang 2012-11-09 where it was broken up.

On the occasion of its visit to Halifax, Brostrom was a partner in Atlantic Container Line, and Bullaren was subbing for one of the ACL ships, likely the one that Brostrom owned, Atlantic Saga, which might have been in refit. Brostroms were also partners in the Barber Blue Sea service.

Regular callers to Halifax at one time, Nordana Line of Denmark not only carried container and RoRo, but featured heavy lift capability. They had three sisters, Skanderborg, Schakenborg and Skodsborg in their regular rotation. They eventually transferred to Saint John, NB, where there was more cargo for them. 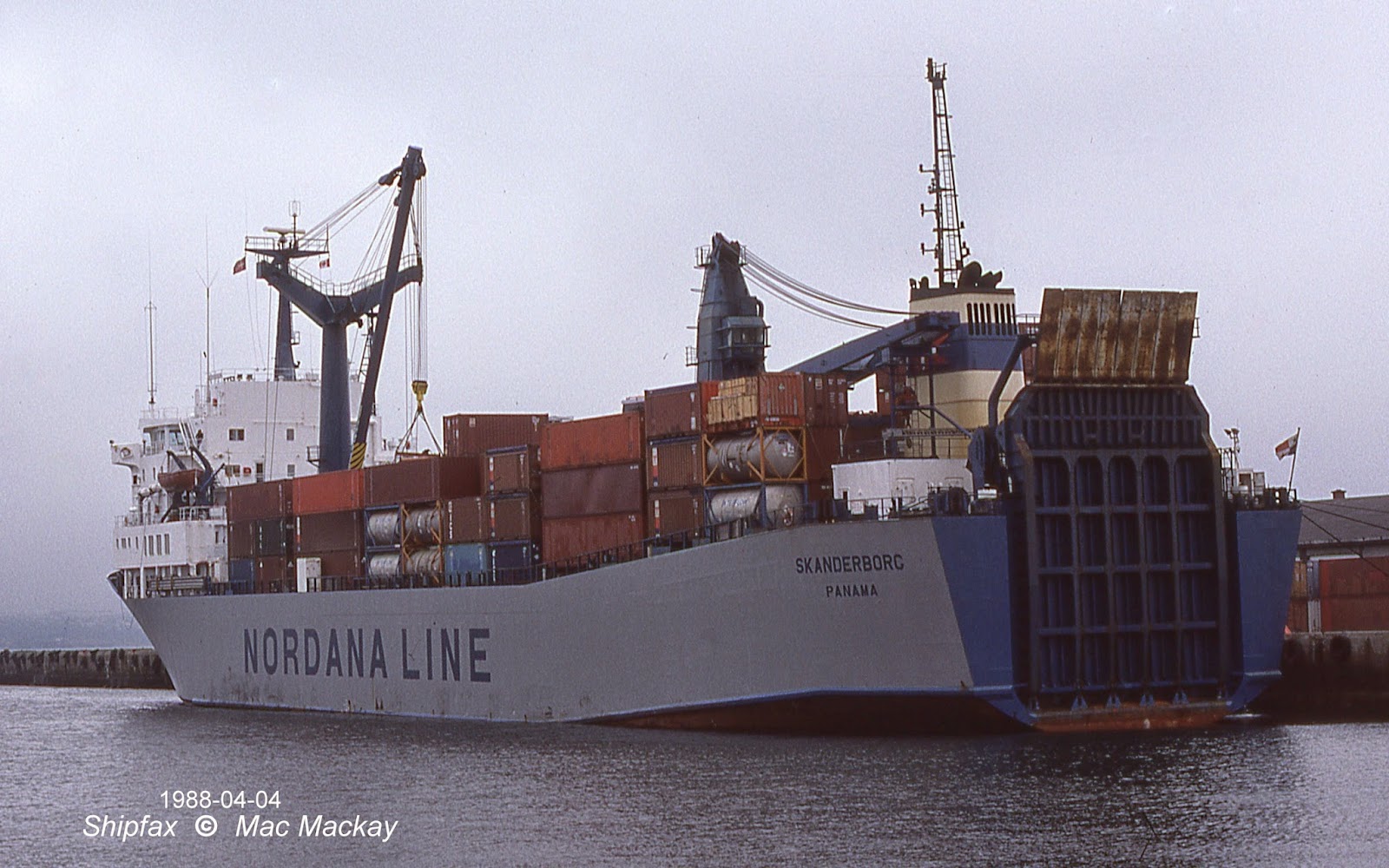 Built as Dana Arabia, Dana Caribia and Dana Africa by Nippon Kokan, Shimizu, Japan for Atlantic Heavy Lift Carriers, they were renamed in 1984 when acquired by Dannebrog, owners of Nordana Line. Initially gross tonnage was 4496, but under new regulation it became 12,076. (Its RoRo deck was re-classed as internal). The ships were lengthened 26.4m and so extensively rebuilt in 2002 that they were re-classified as if new in 1984. They then measured 14,805 grt. Another rebuild in 2004 updated the ships to 1990 build status. TEU capacity increased from 476 as built to 654, and they received a second 120 tonne derrick in addition to the existing 36 tonne crane. 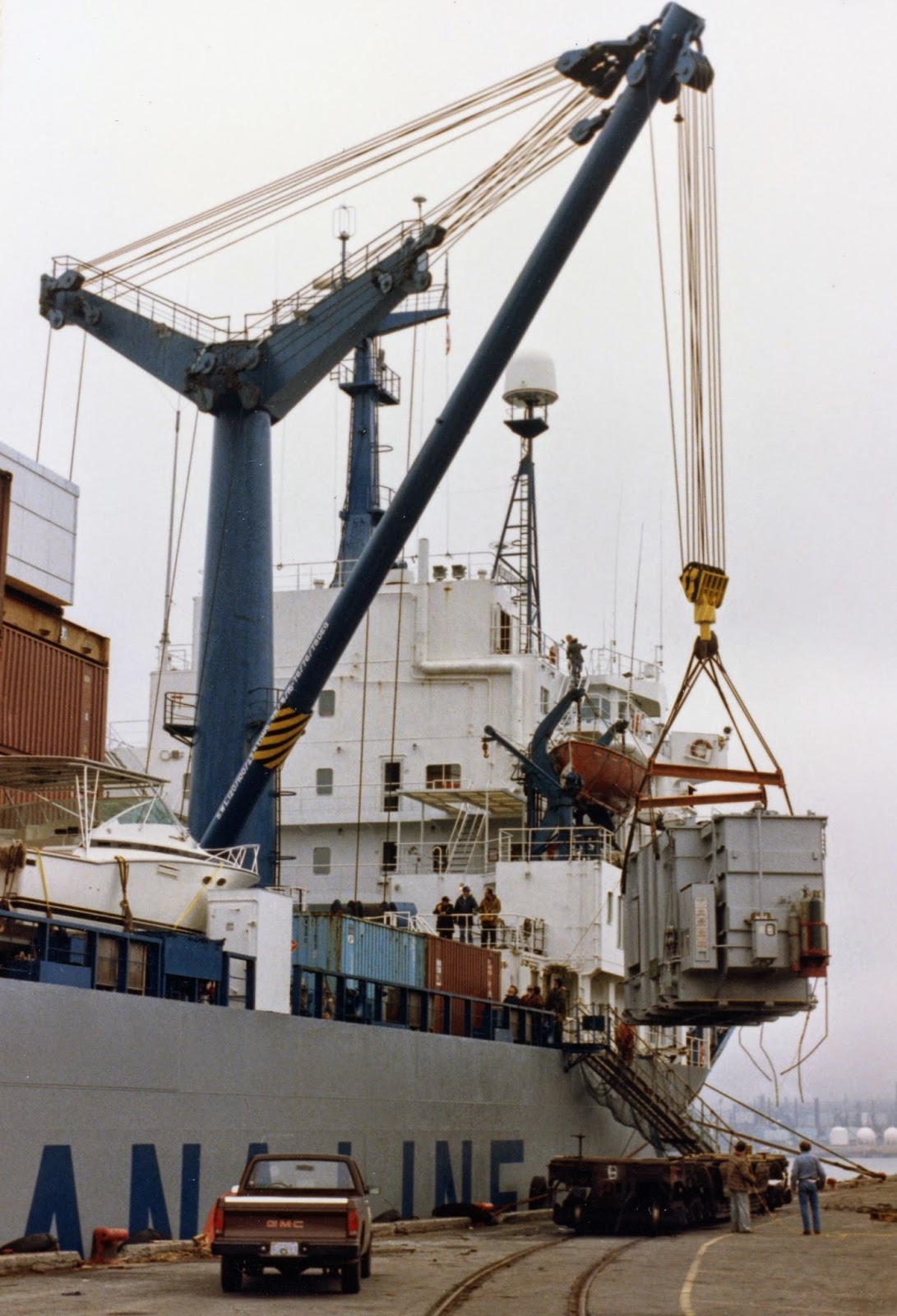 Skanderborg using the derrick to lift a transformer from its rail car.

K/S A/S Motore (Nils Hugo Sand)
More Scandinavian content came from these owners. I don't know much about them or why their ship was at pier 36 in 1980, however it was an odd enough ship to warrant some notice.

Its after section was built by OyNavire AB, Nantali, its forward section by Marstrandsverken in Marsland and it was joined in 1978 by Vaagen in Kyrksaeterora. Rated at 520 TEU, only 234 were carried on the weather deck. It appears to have hatches to the RoRo deck, which had a capacity of 88 trailers. The stern ramp, was square amidships, made up of two side by side leaves, and did not swing. A ramp was built in the pier wall at pier 36 to accommodate early RoRos, and is still in use today, although now within Halterm.
The ship is also still in service, having been sold in 84: Erica and 87: Jolly Arancione, and in 96: Nicolas A. It is still sailing with that name under the Greek flag. From photos on the net, it seems to be trading to Egypt, and appears unchanged.