Where Have All the Con-ros Gone - Part 8 (and last) 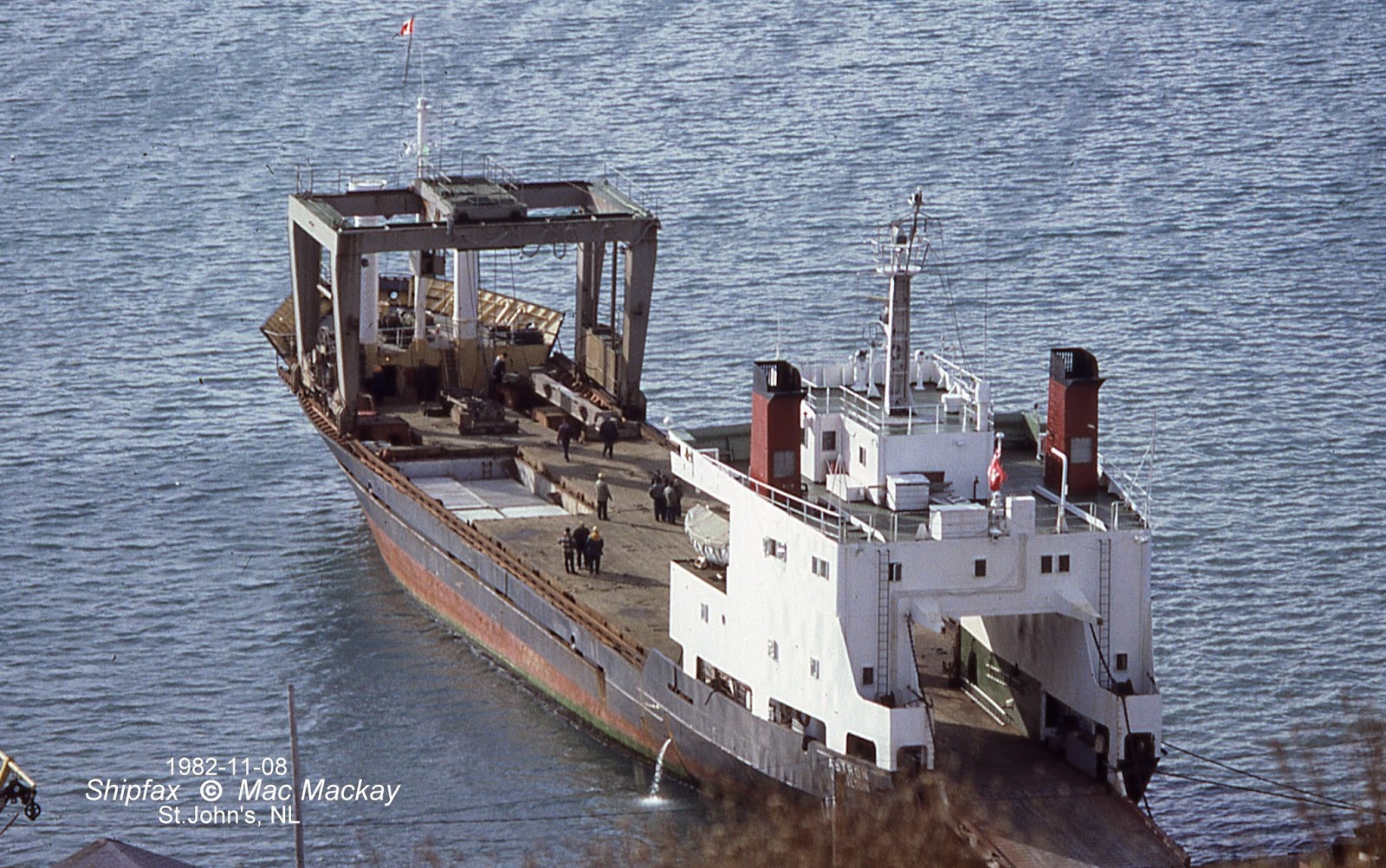 Docked in St.John's - Mediterranean style - Astron shows off its flush deck with a hatch cover removed to load containers below deck.

Arriving in Halifax for Atlantc Searoute, Astron carries a lot of Terra Transport boxes. Terra was owned by CN, then operators of Marine Atlantic, and ASL's primary competitor, but in 1988 CN abandoned all rail operations in Newfoundland, and sold one of its rail ferries. ASL could compete with Terra by shipping the boxes directly to Halifax compared with Terra trucking them to Port aux Basques, then shipping them to the mainland.

Now holding the record as Canada's oldest Con-Ro, Astron has been a fixture in eastern Canada since 1978. It was built in 1971 by A. Vuyk+Zonen in Capelle o/d Ijssel, Netherlands as Atlantic Bermudian, becoming Londis in 1973 and Merzario Sardinia in 1976. It was acquired by Coastal Shipping Ltd and at first operated under the Bermuda flag. Its normal area of operation was Newfoundland and Labrador, but from time to time was called on to assist the St-Pierre Con-Ro service in 1988, 1992, 1995-1996 and Atlantic Sea Route in 1989, showing up in Halifax from time to time.In 1983 it ran aground in Domino Run en route to Goose Bay and was declared a constructive total loss. It was repaired and returned to service.
Its 108 TEU capacity included 33 reefers. The TEU was later upped to 113. It can carry 40 trailers or some combination thereof. Its hold, fitted with flush hatch covers, can accommodate 40 - 20' boxes. The traveling gantry crane has a 30 tonne capacity.
In 2011 it was called in to replace the newer Con-Ro Dutch Runner which could not maintain its Lewisporte / Labrador summer supply schedule.
The ship is still in service and looks to be good for some years to come.

Dutch Runner
Built by the famed German builders J.J.Seitas  in 1988 as North King the ship was renamed Dutch Runner in 2000 and P+O Nedlloyd Douala in 2001. It reverted to the name Dutch Runner again in 2002 when the Great Lakes Feeder Line ULC was formed and based in Calgary, AB. However it did not begin to fly the Canadian flag until 2008. 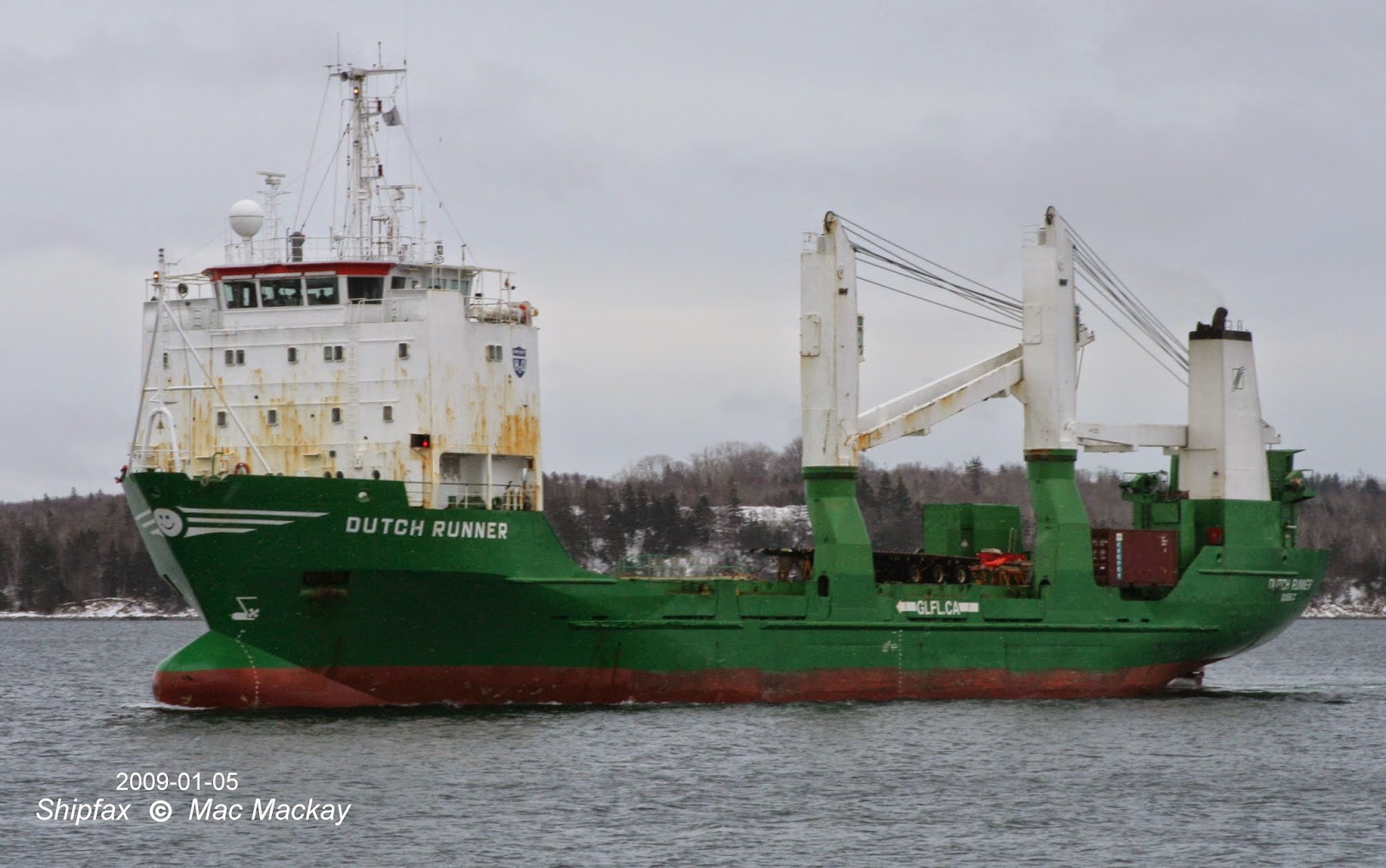 It operated on the Halifax -St-Pierre et Miquelon service in 2008-2009 and again in 2010. It also had a charter to Desgagnés for northern work in 2010 then made a trip to the Great Lakes calling in such ports as Deseronto, Thunder Bay, Owen Sound and Cleveland. In November 2010 it arrived in Halifax with a small consignment of aluminum ingots bound for Rotterdam. It was to have reflagged to make that trip, but returned from what I can tell it remained Canadian.
It was chartered for the summer of 2011 by CAI to work out of Lewisporte, NL for Labrador. The ship was apparently slow to load and a large backlog of undelivered cargo accumulated as winter closed in. Astron was brought in to replace Dutch Runner. It then was reported in Pugwash, NS in November running salt cargoes to Mulgrave, NS. It may have made a run up the St.Lawrence before laying up in Souris, PE in December 2011. 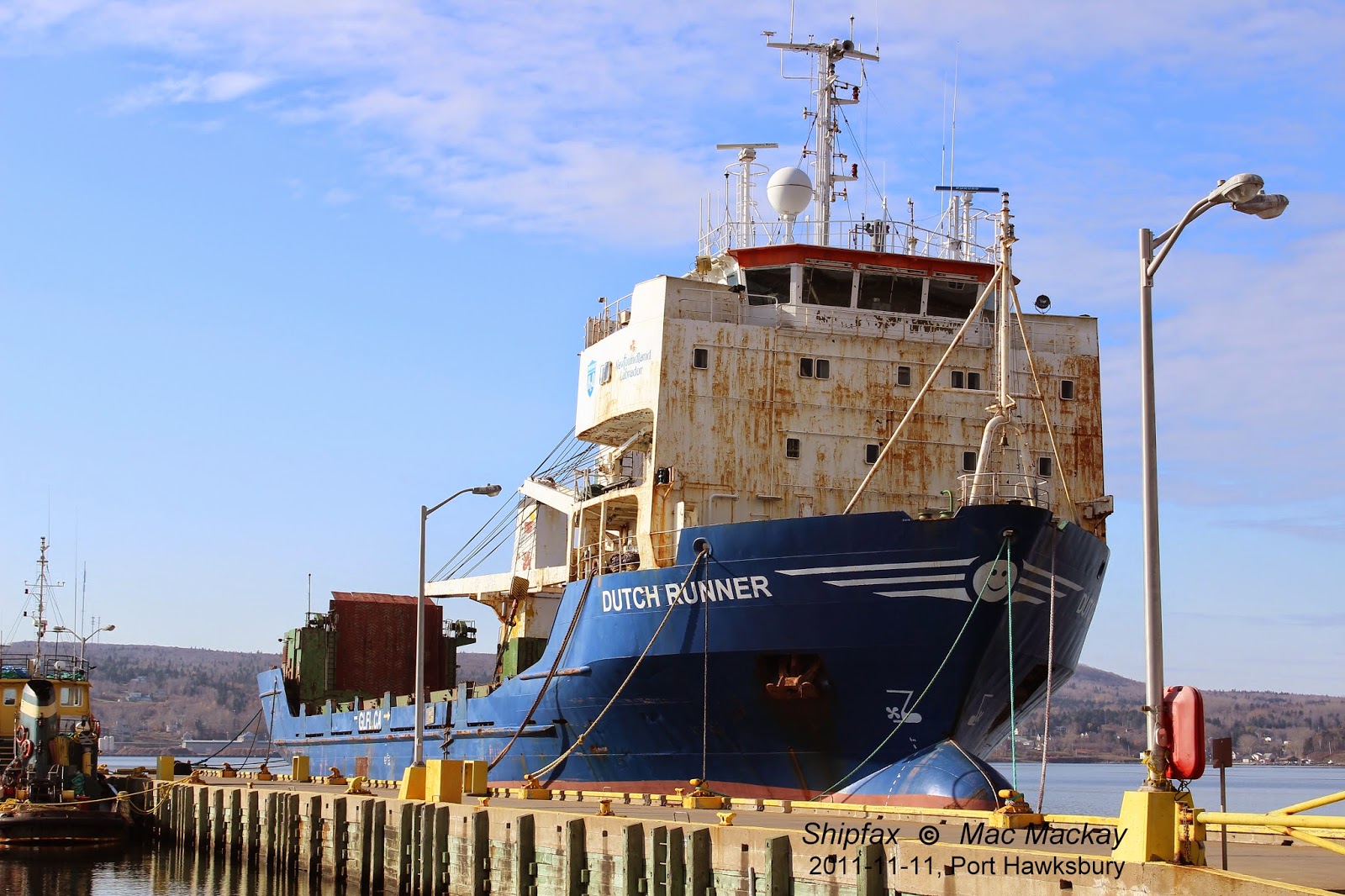 It remained there until October 2014 when it was towed to Port Hawksbury ostensibly for refit, but has been idle there since. The ship has a capacity of 219 TEU or 16 trailers, and has two 35 tonne crane. The future seems fairly bleak for this interesting little ship as demand for Con-Ros has diminished. It will likely end up in the Caribbean somewhere.

Nada / Trans Gulf
Another ship to work the Lewisporte to Labrador route was Nada. Its contract with the Province of Newfoundland was for three years, 2003, 2004 and 2005, and owners were Star Line Inc of Clarenville, NL. That company was also associated with the Clarenville Dockyard, and is better known as owners of the icebreaker Polar Prince ex Sir Humphrey Gilbert.
Built in 1974 as Nornan Fjord by D.W.Krmer Sohn, Eimshorn for Norwegian owners. The 1197 grt ship, with a single 22 tonne crane and stern ramp does not have a TEU rating listed in Lloyd's Register. It was renamed Sea Fisher in 1979 then in 1981 it was sold to Sharjah owners and renamed Strong Roc. Abdu Dhabi owners  took over in 1987 when it became  Transgulf for the first time. In 1966 the name Nada appeared on its bows.Owners were listed as Nada Shipping, with Canship Ugland as managers, and it was registered in the Bahamas. 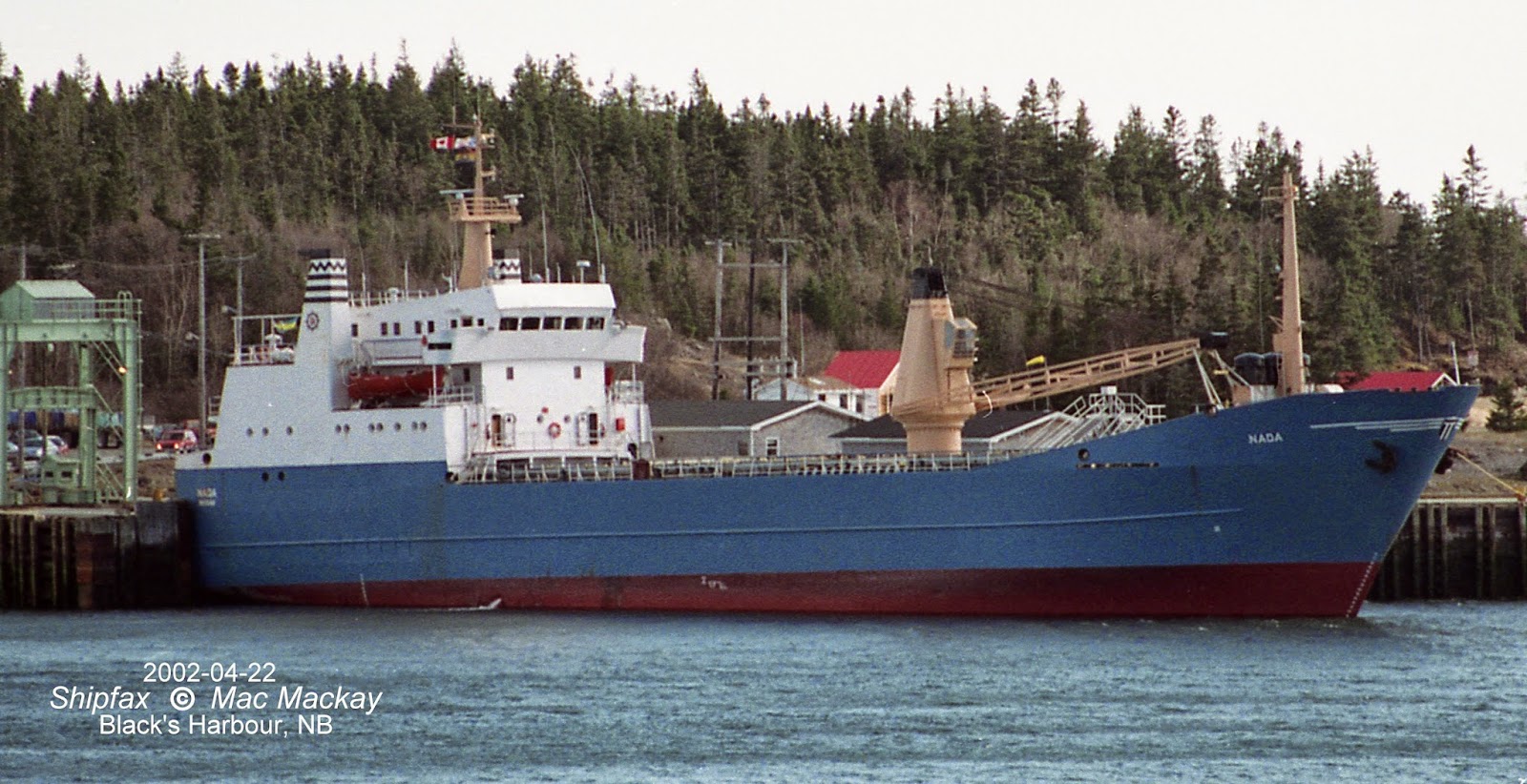 The ship was running to Grand Manan Island when I saw it in Black's Harbour, NB in 2002.

It took Canadian registry in May 2003 and that was closed in November 2006, during that time it was renamed Trans Gulf (this time as two words).
In 2006 it was sold to Panamanian owners and renamed Pacific II. Then in 2013 it became Trans Gulf (also two words) under the Panama flag, but owned Sloman Shipping Line Inc and managed by the grandiosely named World Shipping Management Corp SA, both of Medley, FL.

Present day Con-Ro activity in this area, except for Atlantic Container Line, and Bahri (National Shipping Company of Saudi Arabia) is confined to coastal traffic, and so we have the weekly callers Oceanex Sanderling to Newfoundland and Fusion to St-Pierre et Miquelon. Oceanex also operates its Oceanex Connaigra on the Montreal / St.John's weekly run.
Groupe Desgagnes has its Anna Desgagnes on arctic supply work. That ship, one of the Russian Astrakhan class may not be with us much longer. It used to pick up winter work under the Barbados flag, but has been laid up for the last two winters in Montreal. You may see more of her in this blog at a later date, since Desgagnes seems to be on an expansion program, replacing some of its older tonnage - both tanker and dry cargo.
Other than that the sight of a Con-Ro is becoming an increasingly rare one. There is limited demand for the mix since dedicated car carriers and car/truck carriers have taken a large slice of the RoRo traffic. The huge investment needed to build a RoRo compared to a simpler Lo-Lo (lift on - lift off) container ship is just not warranted for occasional use.