The last bastion of classic three island tankers was the United States. Thanks to the Jones Act, only US built, owned and crewed ships are allowed to trade between US ports. Ships live to ripe old ages under this regime, since they are so costly to replace. Although articulated tug/barges supplanted small coastal tankers, they were never large enough to displace the crude and product tankers built in the 1950s and 60s. Most of those managed to live out their lives until they reached their sunset dates.
Those dates were established as an orderly means of replacing single hull tankers with double hull, since a wholesale simultaneous replacement was impossible with the limited shipbuilding capability in the country.

I found Houston and Tampa to particularly good spots to see the three islanders, but they could be seen at almost any US port into the late 1990s.

The most prolific builder of US three islanders was the Bethlehem Steel Co, and their yard in Sparrows Point, MD churned out scores of the ships for all the oil majors and many others. If the ships begin to look all alike that may be why.

Seminole, launched as Stanvac Meridien and completed as Mobil Meridian in 1961 by Bethlehem, Sparrows  Point, was renamed Seminole in 1991. The major oil companies were trying to distance themselves from oil oil transportation - at least in the public's eye - after several embarrassing incidents, including the Exxon Valdez. However the 28,218 grt, 47,616 dwt ship still carried the red flying horse Pegasus until the mid-1990s. In its last few years of service the funnel was plain black. Its name was abbreviated to Minole for the trip to the breakers in Chittagong, Bangladesh where it arrived January 15, 1998. 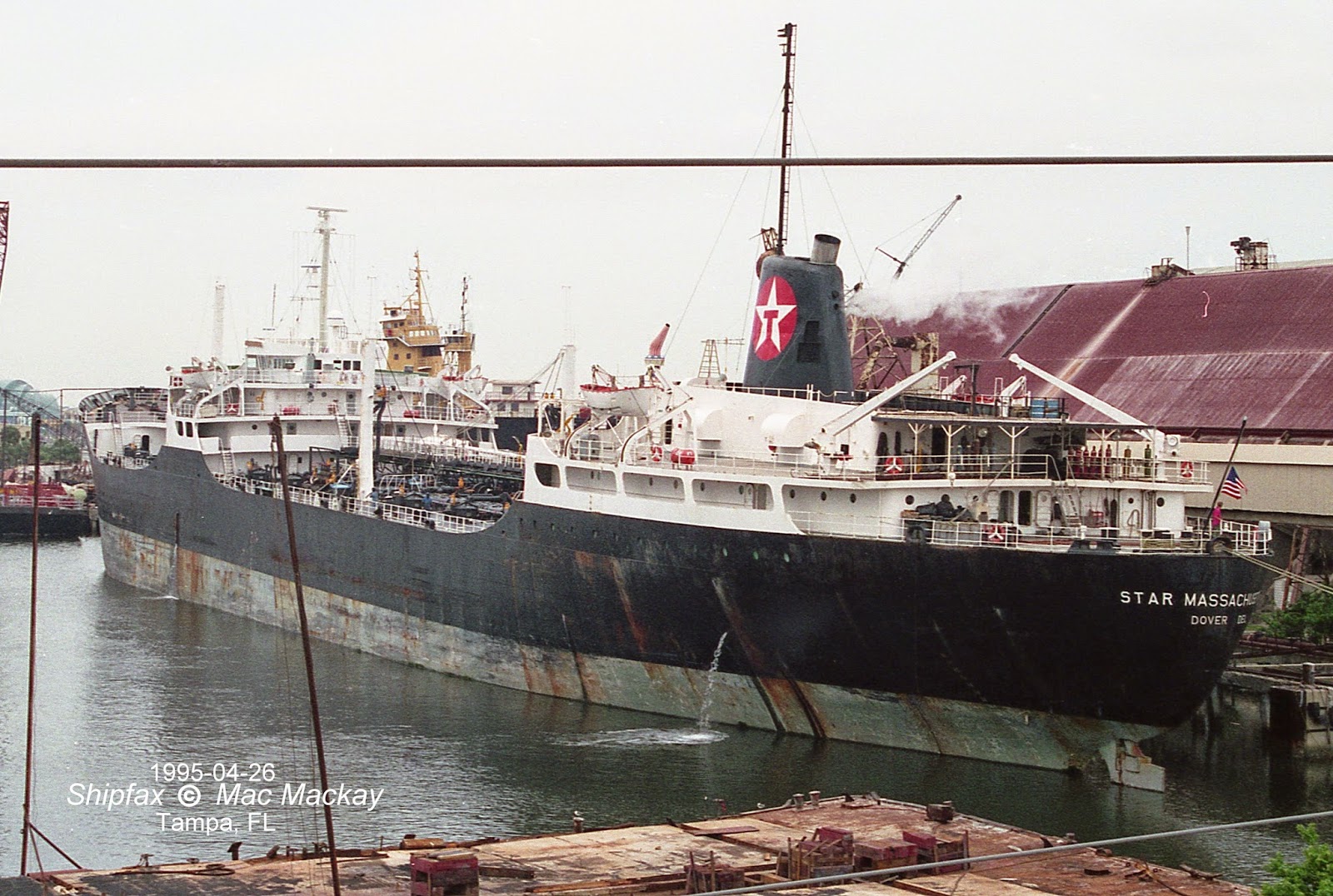 Neches was operated by Sabine Towing & Transportation Co Inc, one of several tanker companies not owned by the majors. Built in 1958 by Bethlehem Pacific Coast shipyard in San Francisco,  it started out as Hans Isbrantsen and in 1971 became Santa Paula, until 1982 when it passed to Sabine. It measured 20,066 grt, 32,791 dwt. It sailed to the breakers in under the St.Vincent and Grenadines flag, arriving at Alang May 17, 1996.

Coastal Corpus Christi came from the Newport News Shipbuilding + Drydock Co as Esso Boston, trading for Humble Oil. In 1973 it was renamed Exxon Boston as part of the rebranding from Esso to Exxon. Coastal Tankships USA Inc acquired the ship in 1989, renamed it and operated the 30,680 grt, 49,557 dwt ship until 2000. It was then renamed Christi for the trip to Alang where it arrived August 2, 2000.

It was not the end of the line for all the traditional tankers, some got second wind. 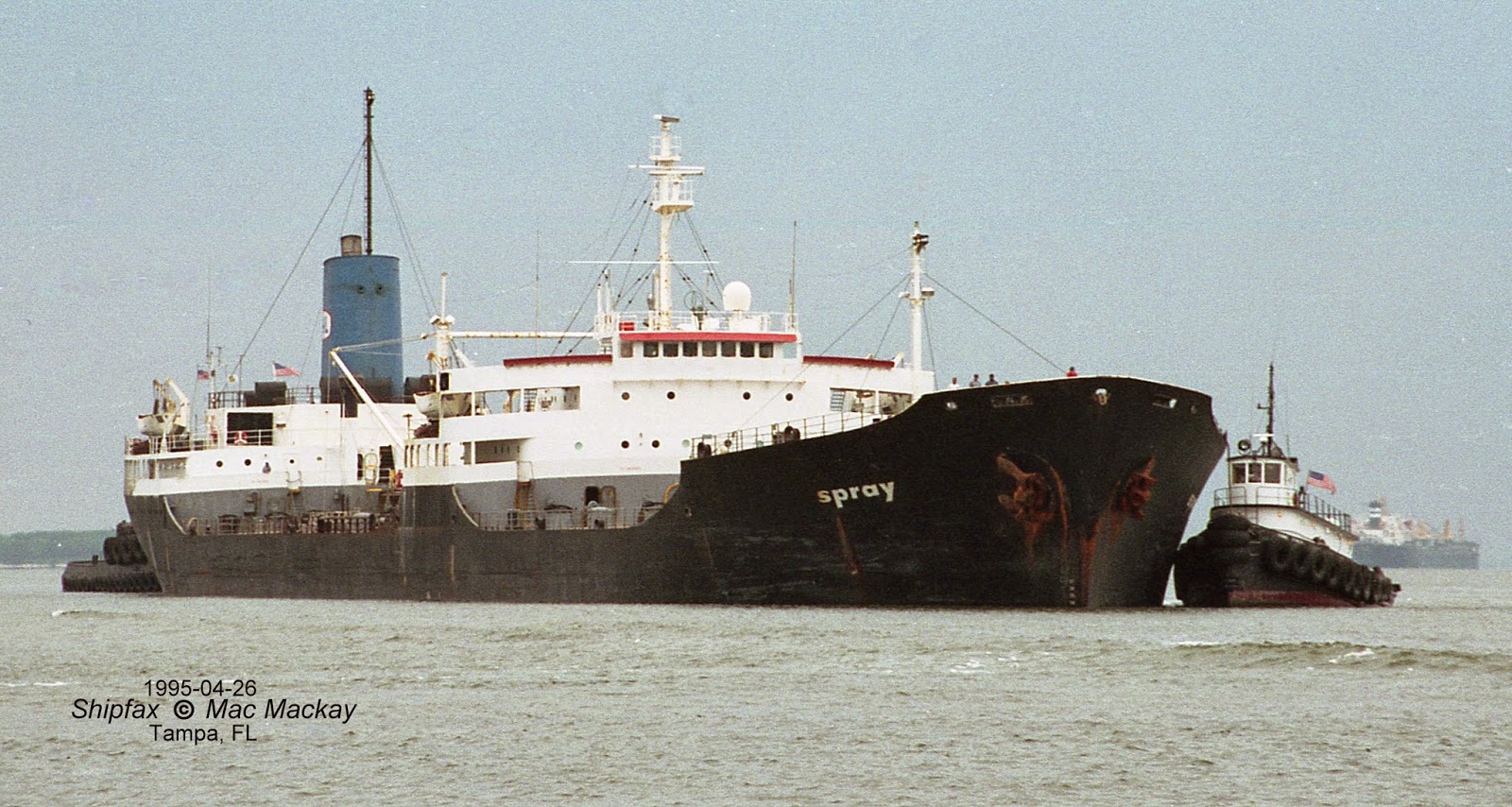 (with tug Yvonne St.Phlip)
Spray emerged from Sparrows Point in 1960 as Gulfspray for Gulf Oil. They divested the ship in 1985 to American Heavy Lift Shipping Co and in 1997 it was sent to Avondale Shipyard, upstream from New Orleans, where a new 510ft double hull forebody was built. It emerged about 30 feet longer, with tonnages increasing from 18,776 grt to 23,358 and 29,150 dwt to 39,483 dwt, and with the name New River.It also lost its island bridge, and received a box like superstructure, mounted aft, over the old engine space.
See:
The rebuild did extend the life of the steam turbine powered ship, but it still ended up at the breakers in Brownsville, TX in April 2011.

Rebuilding was only a stop gap until new tonnage could be acquired. All US tankers are now double hulled, all have superstructure aft, and I venture to say few have the character of the classic three islanders.

To leave the United States again, here are some more three islanders:

From the last post, B.A. Peerless (later Gulf Canada) had a fleet mate that ran from Venezuela to Montreal or Portland, ME with crude oil. B.A. Canada was built in 1953 by Uraga Dock in Yokosuka, Japan, 13,173 grt, 20, 949 dwt. According to one reader, when the ships met on the St.Lawrence, there was great saluting, both with whistles and flags, and it was a major event aboard both ships.
Almost the same size as its Canadian counterpart, B.A. Canada flew the Liberian flag except for a brief spell late in 1969 when it went to the British flag, then was sold to Liberian Oceanways Corp and went back under the Liberian flag, but with the very Greek sounding name Dimitrios D.M. 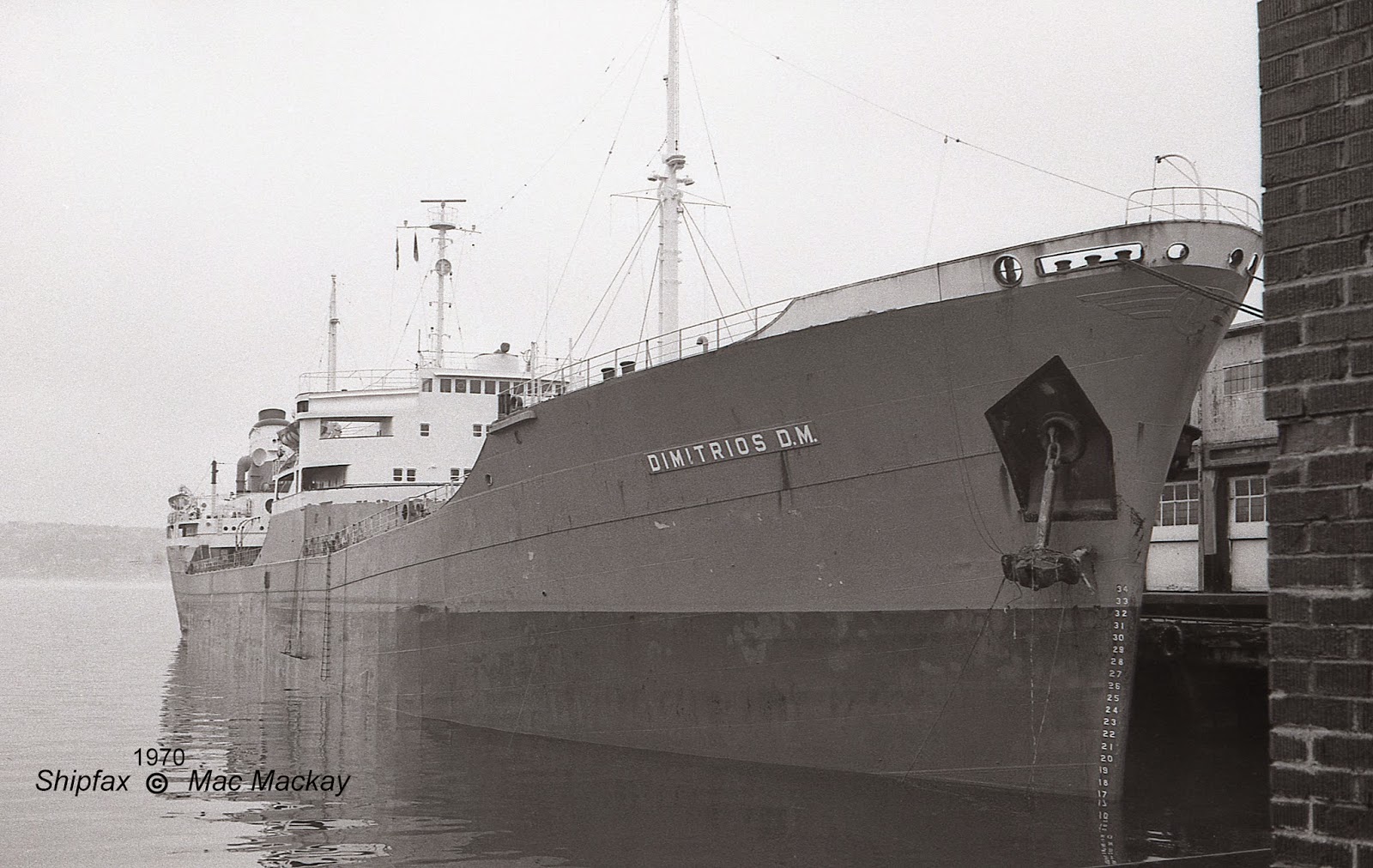 The old B/A logo is still visible on the bow, the hull is still grey, but the name has been plated over.

On August 30, 1975 it was stranded in the Panama Canal (details are sparse on what happened) on a voyage from Tampico to Manzanillo, MX. Damage was apparently fairly serious, because it was laid up in Jacksonville October 14, 1976, then on February 24, 1976 it was sold to ship breakers in Panama City, FL, where it was broken up starting March 10, 1976.

Meanwhile, the USSR was turning out similar looking, but smaller tankers. The Liepaya class of  7.949 grt, 11,890 dwt, built from 1959 and 1960, were used as military suppliers, but also accompanied the USSR fishing fleet off eastern Canada, both for fueling and to supply fresh water for processing. The latter they picked up in Halifax,  and Essentuki was a typical member of the class. 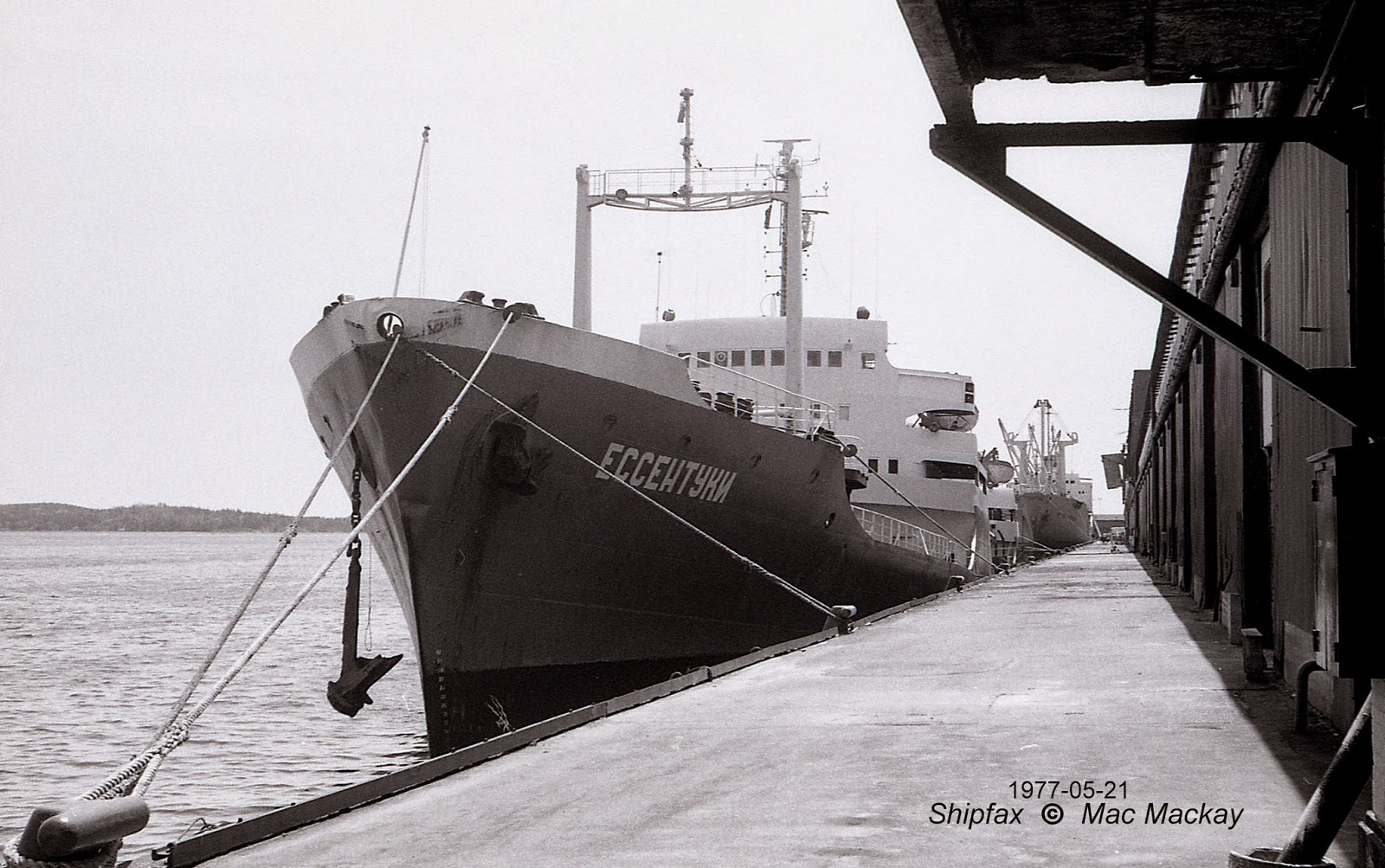 Seen here at pier 20 after loading water, the ship had several un-tanker-like characteristics, including deadlights in the forecastle, guard rails along the deck, a rather sleek hull shape and some extra communications equipment. Built in 1959 by the Admiralty Shipyard in Leningrad, it was reportedly broken up in 1991. 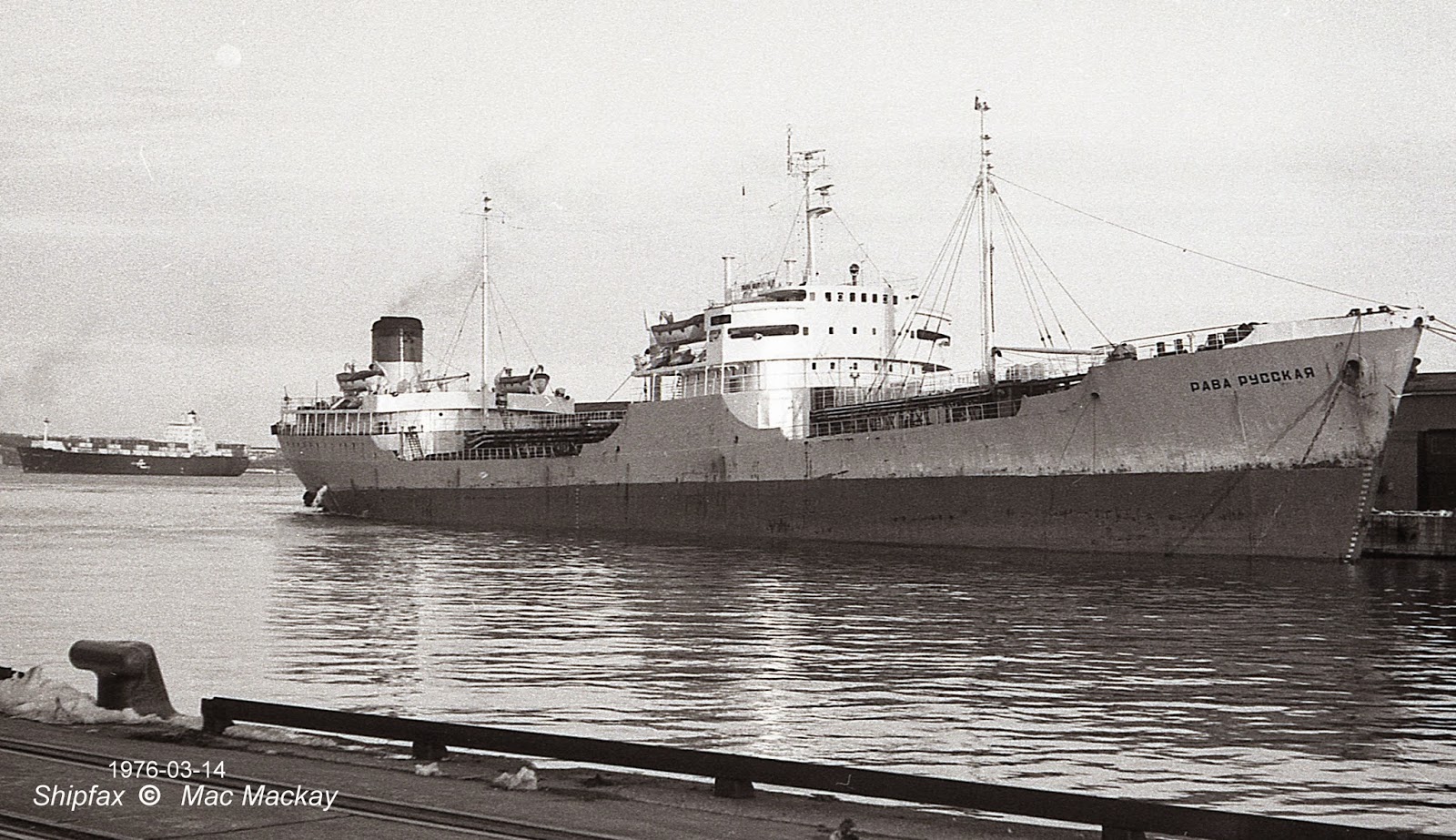 Rava Russkaya, built in 1960 by the Kherson shipyard, for the Latvian Steamship Co may have had less warlike characteristics. (However, in the background is Atlantic Cinderella. Its fleet mate Atlantic Conveyor was lost in the Falklands War.) Rava measured 7,652 grt, 11,770 dwt, and was deleted in 1991 after several years as a barge. It was also supplying fresh water to the Eastern Bloc fishing fleet when this photo was taken.

FINALE
When Fiona Jane arrived in Halifax in early 1977 she was a sad looking sight. Once the pride of Ampol Petroleum Ltd  of the UK, she was built as Leslie J. Thompson by Cockerill-Ougree in Hoboken, Belgium. When built in 1959 she was considered to be quite a large ship at 16,206 grt, 24,600 dwt.
In 1970 she became the Fiona Jane under the Liberian flag and was sadly neglected by Nacional Neptunea SA. She had obviously suffered a funnel fire, but had never been repainted, and in fact she was only months away from the breakers. She arrived in Pusan July 25, 1977. 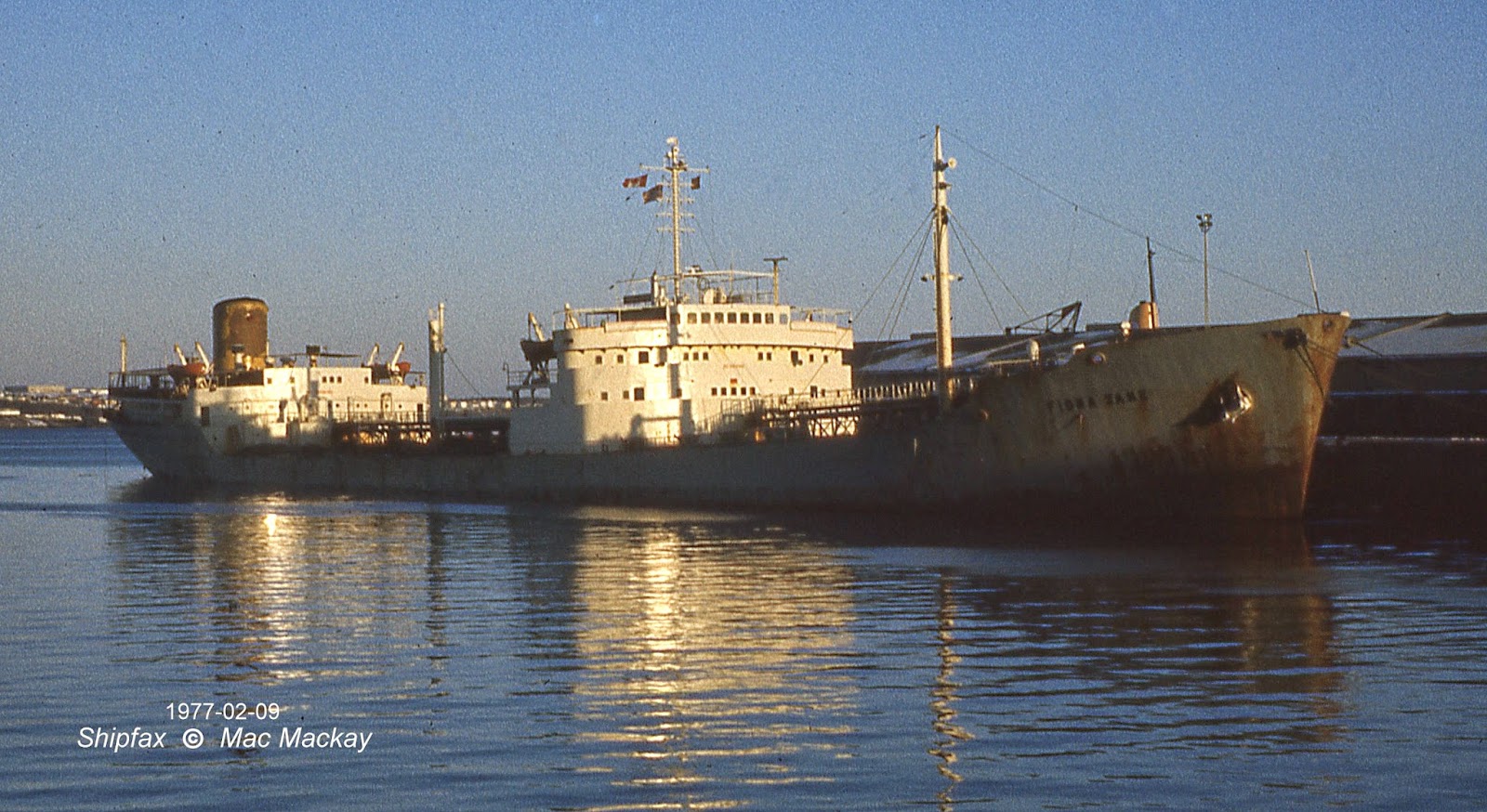 By the look of her she had ample quarters for officers (including a wireless operator) in the bridge structure, and large quarters aft for the large engine room crew. Perhaps not the epitome of the island bridge tanker, she was certainly typical of a type that will be seen no more. Present day handy size product tankers now have twice the carrying capacity and operate with one third the crew, all accommodated aft over a diesel engine. That's progress.