Where Have All the Con-Ros Gone - Part 6

Wilhelmsen Lines and partners
Wilhelm Wilhelmsen, the long time general cargo operators from Norway, were always innovators, and even their late general cargo ships were refitted with extra wide hatches, cranes and more gear for handling odd cargoes, including containers. 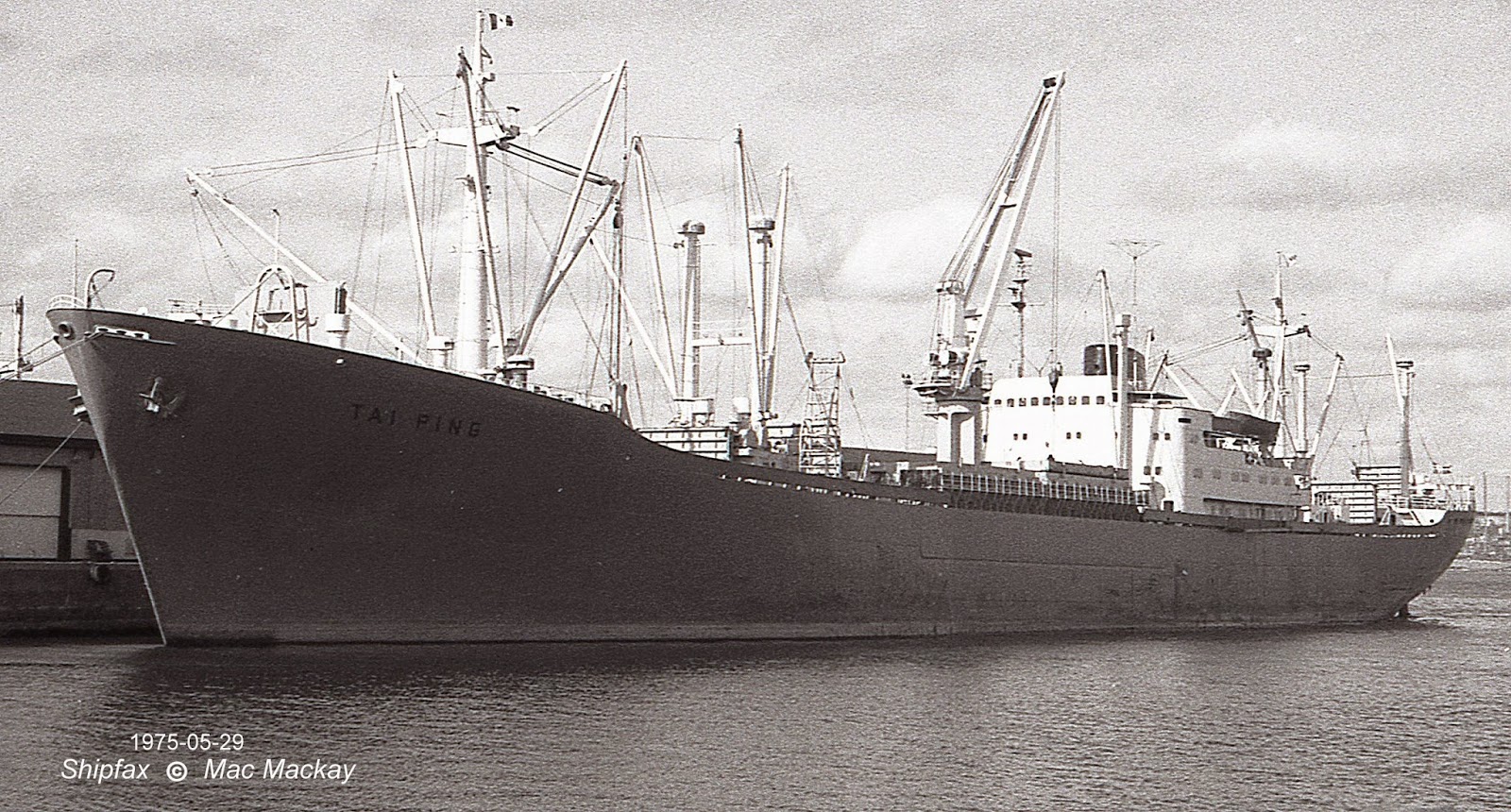 Tai Ping, built in 1958 as a conventional cargo ship with reefer capacity, was lengthened 90 ft in 1970 and was bristling with cargo handling gear. A 60 ton jumbo derrick, 8-10 ton and 10-5 ton derricks, and a 25 ton crane served extra wide hatches in the new hull section, suited for containers. The new section just ahead of the accommodation has extra plating visible in the photo. The ship lasted until 1984 when it was broken up in Chittagong, Bangladesh.

Not surprisingly Wilhelmsen jumped into the container age with a vengeance, joining Swedish AB Transatlantic (Bilspedition) and the East Asiatic Co of Denmark to build a fleet of  Con-Ros.Under the banner ScanCarriers, they ran from Scandinavia to Australia and New Zealand, via North America. 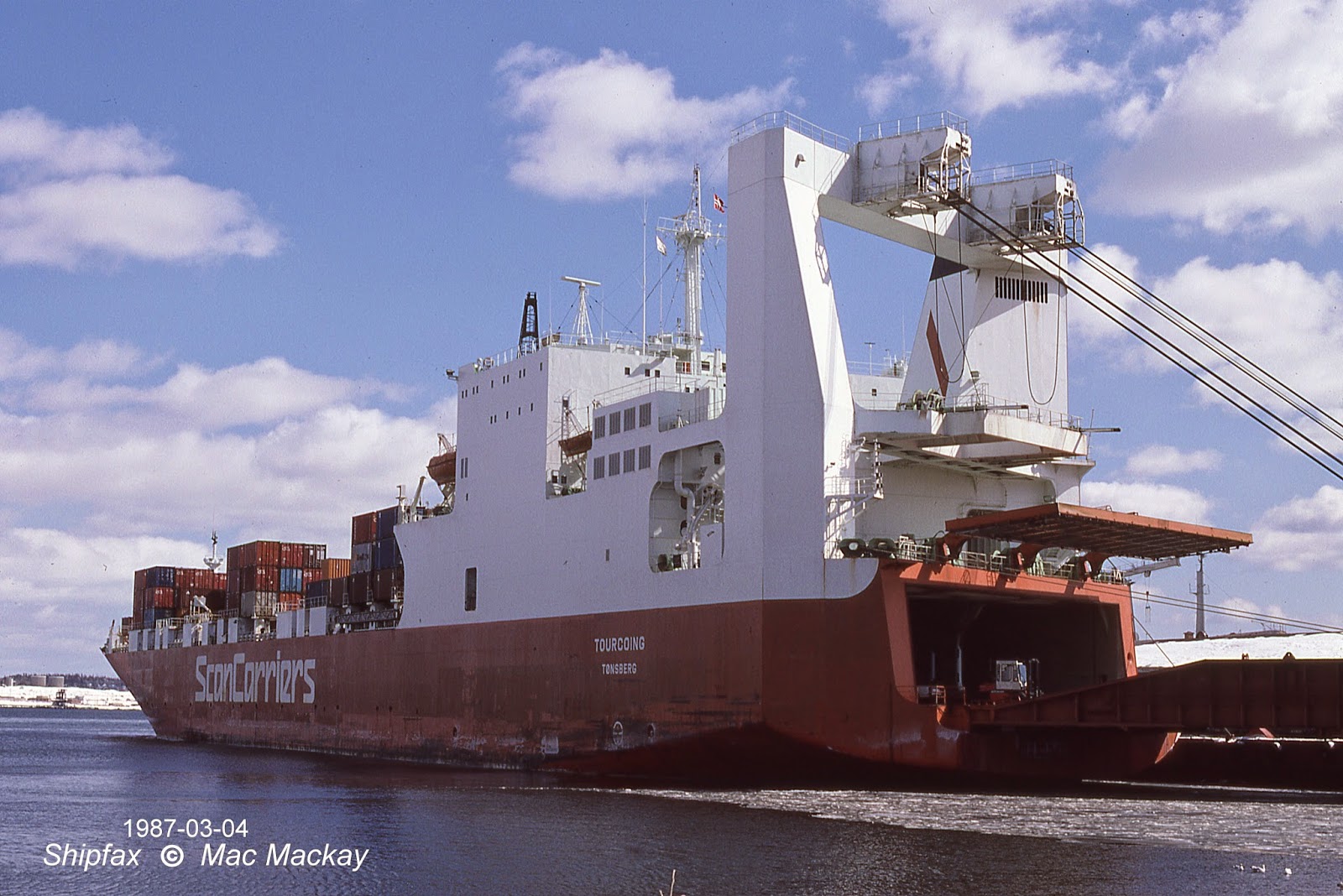 Tourcoing was built in 1978 by Mitsubishi, Nagasaki. In 2004 it was converted to a pure car carrier by installation of garage decks above its original weather deck, increasing gross tonnage from 22,434 to 54,680. It was broken up in 2010. 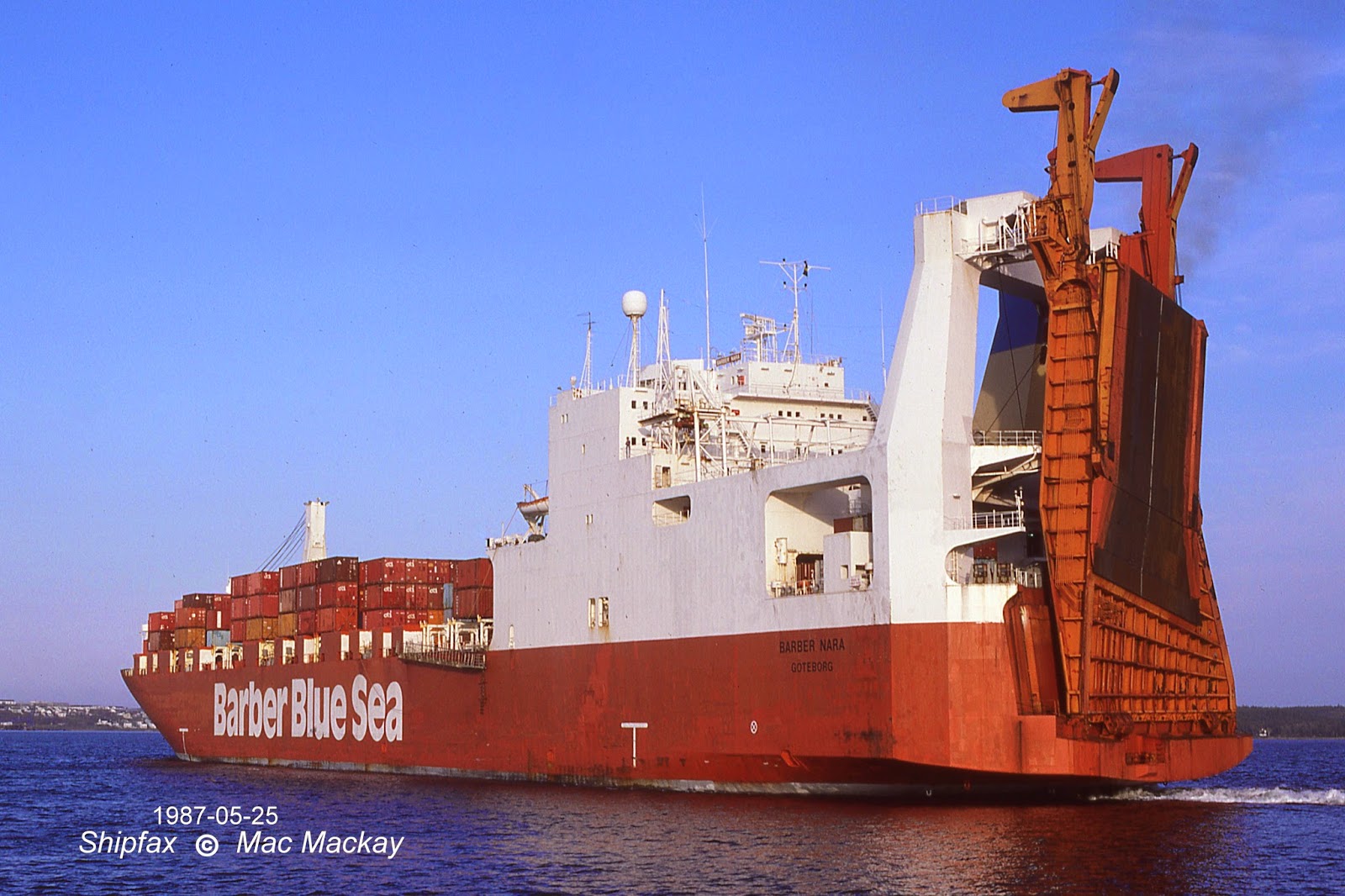 Barber Nara was one of the Blue Funnel ships, but was taken over by Transatlantic when Ocean left BBS. It dated from 1979 when built by Mitsui, Tomano.

The buff funnel with blue top was the traditional Rederei AB Transatlantic signature. It became Wilhelmsen's Tampere in 1989, was converted to a car carrier in 2004 and scrapped in China in 2010.

Effective January 1, 1989 Ocean Transport+Trading withdrew from the services, Wilhelmesen bought their ships and Transatlantic and East Asiatic become small shareholders in Wilhelmsen and operated some of the ships. Thereafter the ships were gradually renamed and took the Wilhelmsen funnel mark and showed Wilhelmsen Lines on the hull. 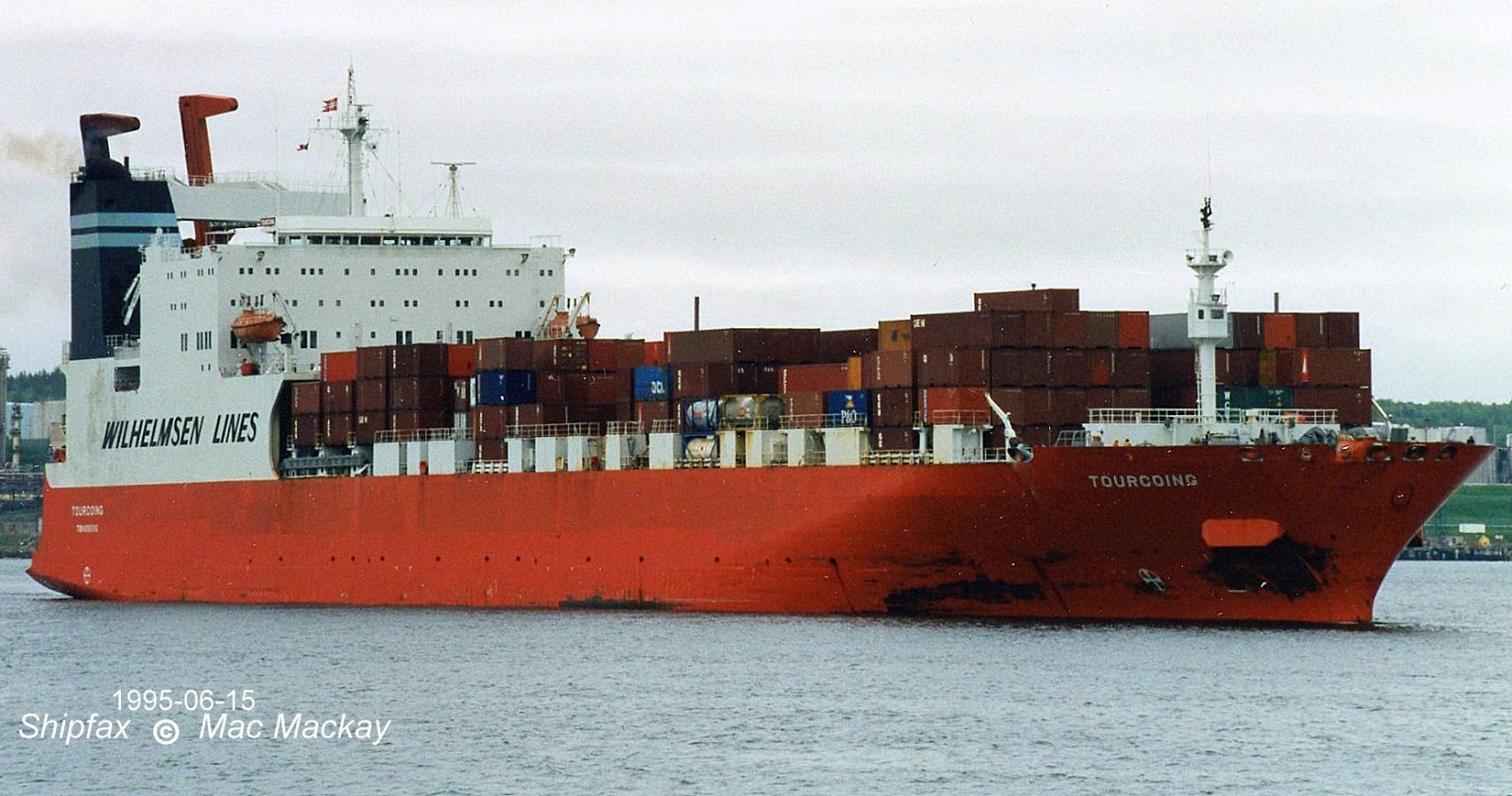 Tourcoing did not need to be renamed as it was a Wilhelmsen ship from the start.

Toba was built by Mitsubishi for Wilhelmsen as Barber Toba and was renamed in 1989. It was converted to a PCTC in 2004, with gross tonnage increasing from 39,535 to 54,680. It was originally fitted with a crane to work special cargo. It went to the breakers in China in 2010. 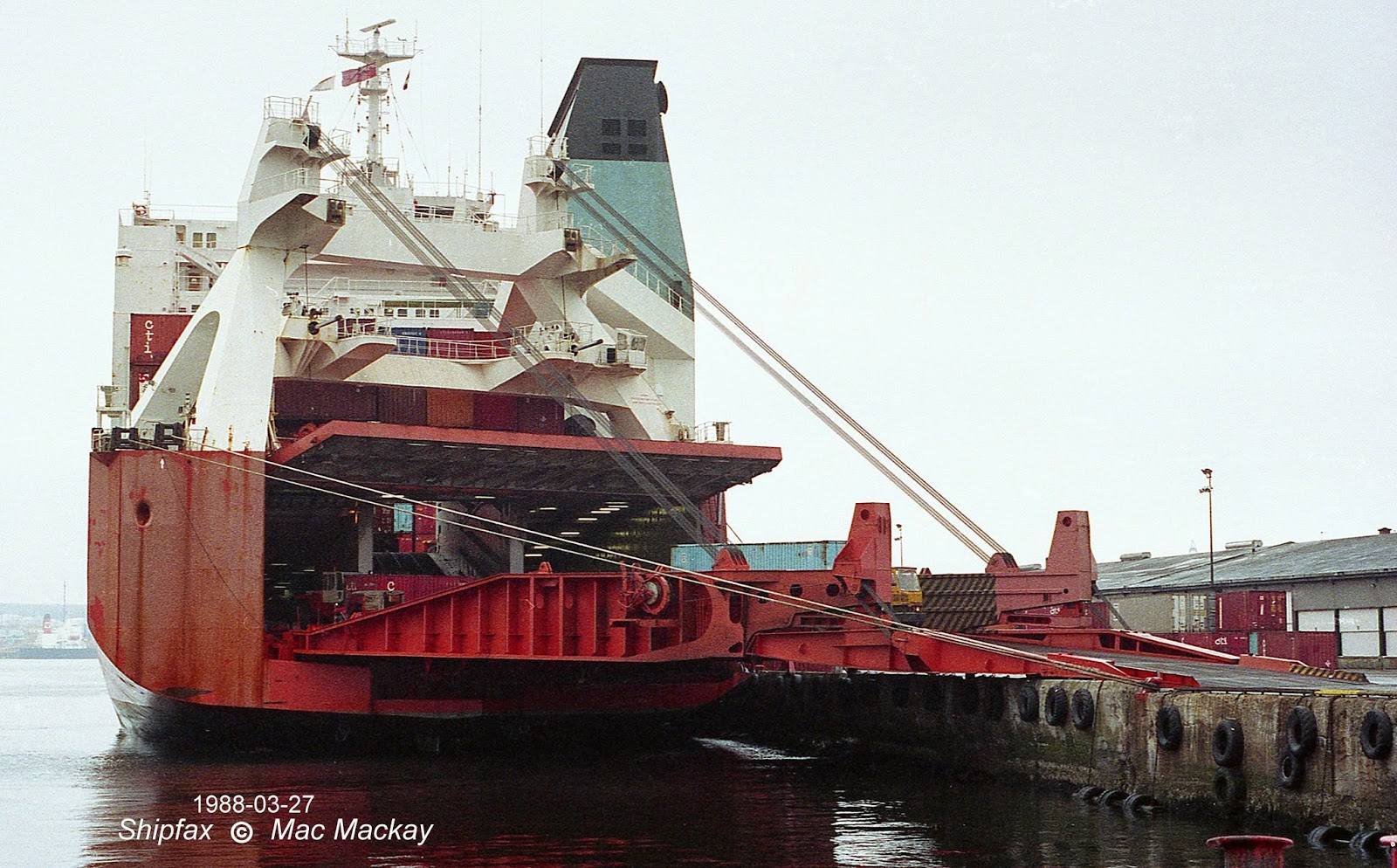 The Blue Funnel owned Barber Hector has its ramp down at pier 31,  providing a view up through the ship to the weather deck. Built by Hyundai it went to Transatlantic in 1988 as Taiko and to Wilhelmsen ownership in 1993. Chinese scrappers broke up the ship in August 2014.

The Barber Texas was built by Hyundai in 1984. Note the superstructure spans over the car deck, and is open below to the garage area and stern ramp except for a closed centre section. 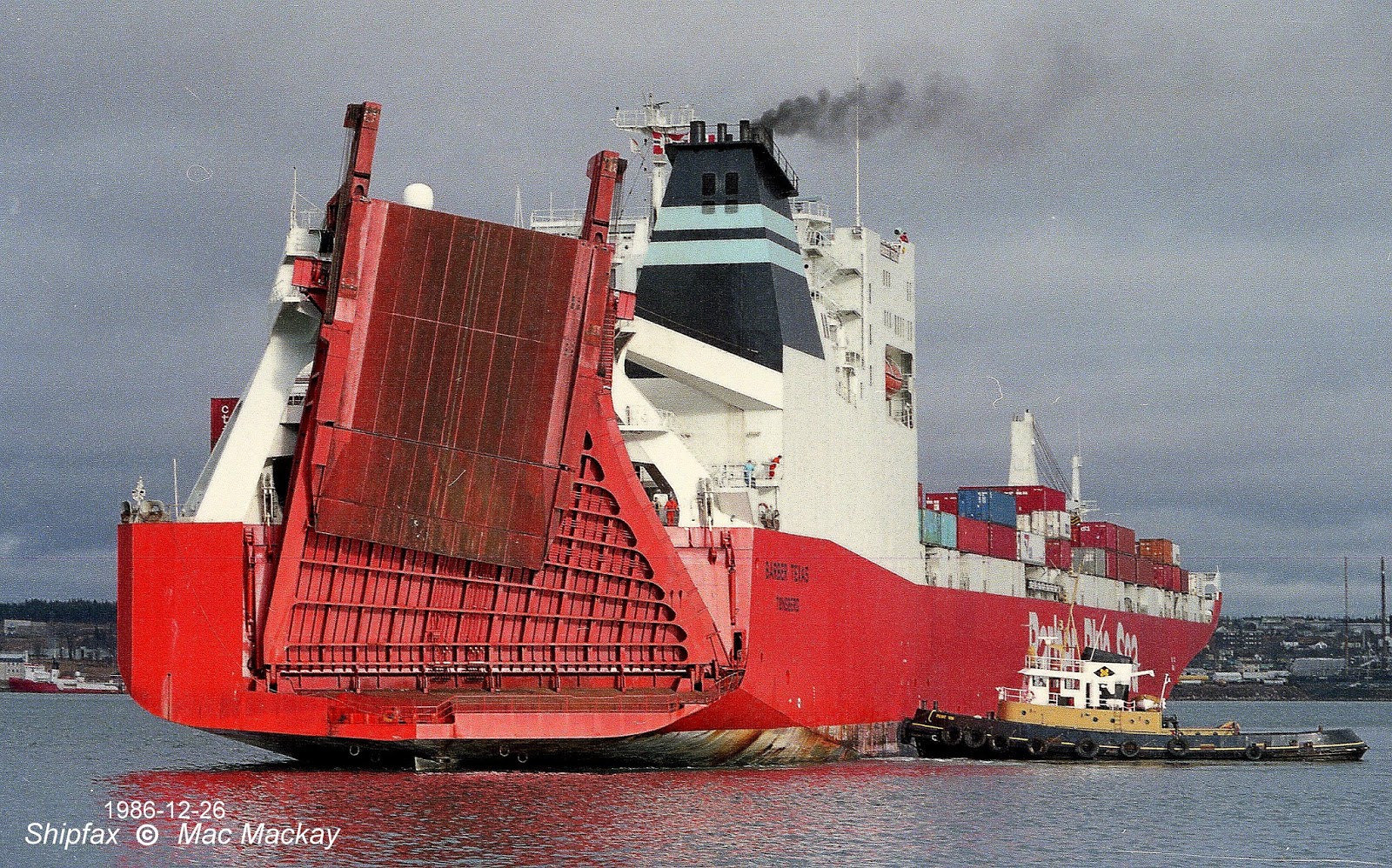 Texas sails with the massive ramp in the up position, and dwarfs the tug Point Vim. 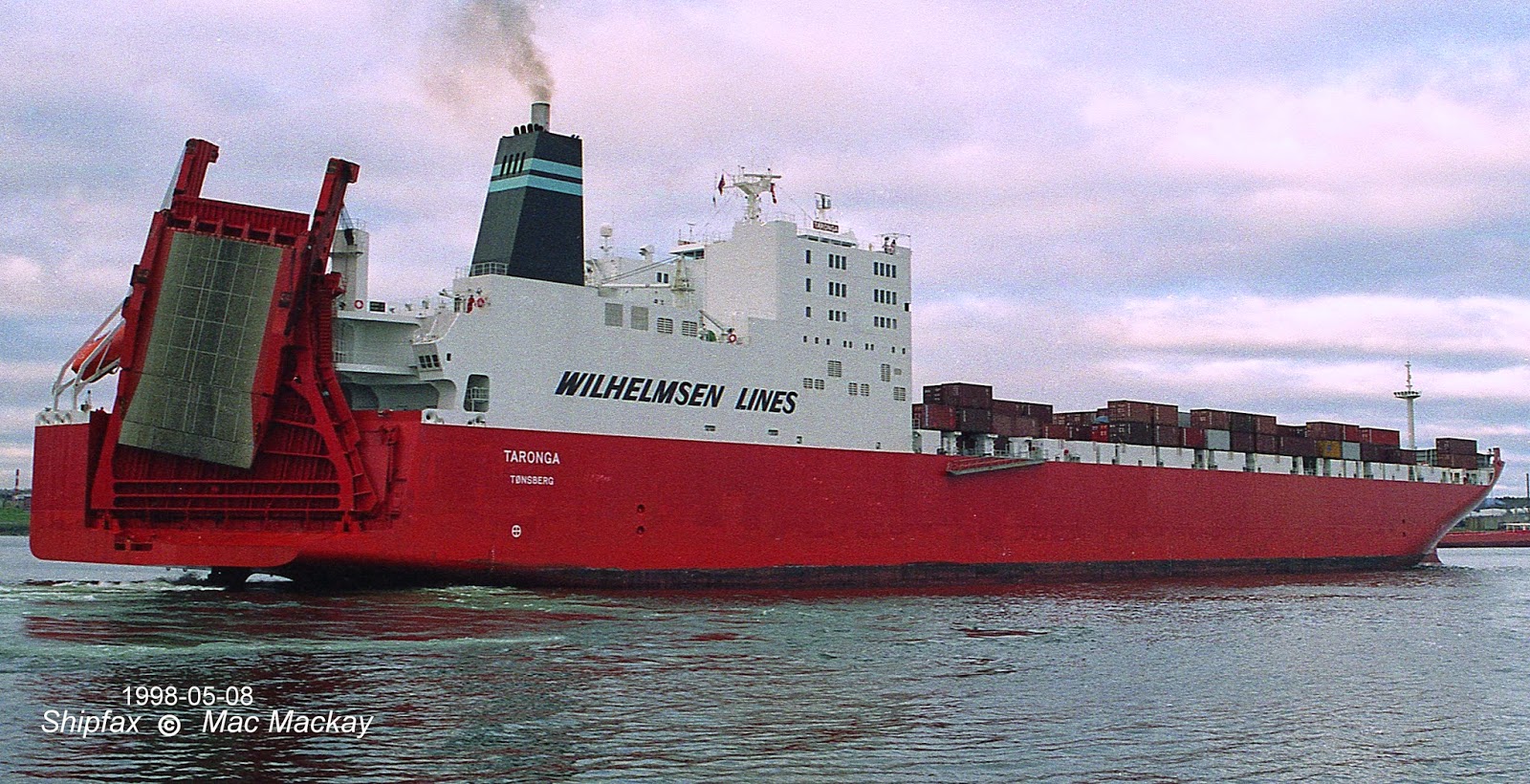 With much cleaner lines and a simplified ramp support structure,  Taronga also had the stern launch type lifeboat. Converted to a PCTC in in 2003 it then measured 72,708 grt. It was sold an renamed Endurance in 2010 it is still sailing.


There were also a number of "one-offs" in the Wilhelmsen Lines service. 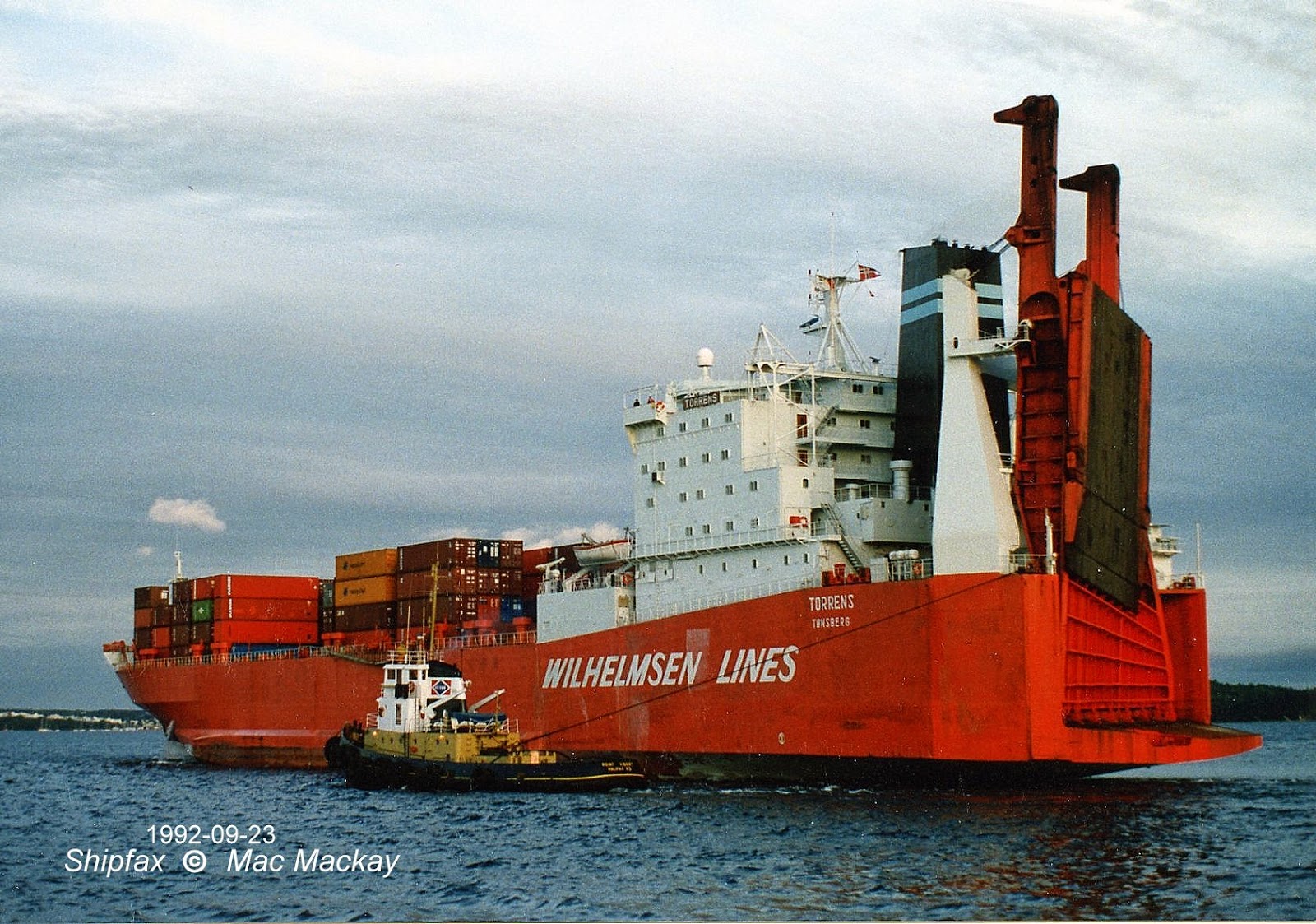 Torrens started out as Katowice II in 1989 when constructed by Ast. Espanoles in Puerto Real, Spain. It was soon renamed Topaz for the Spanish Polish Shipping Co. Wilhelmsen bought the ship in 1989, but sold it on in 1994. It became Kagoro, and in 1996 Jolly Marone. It was named Marrone last year for its trip to scrappers where it arrived December 9, 2014. 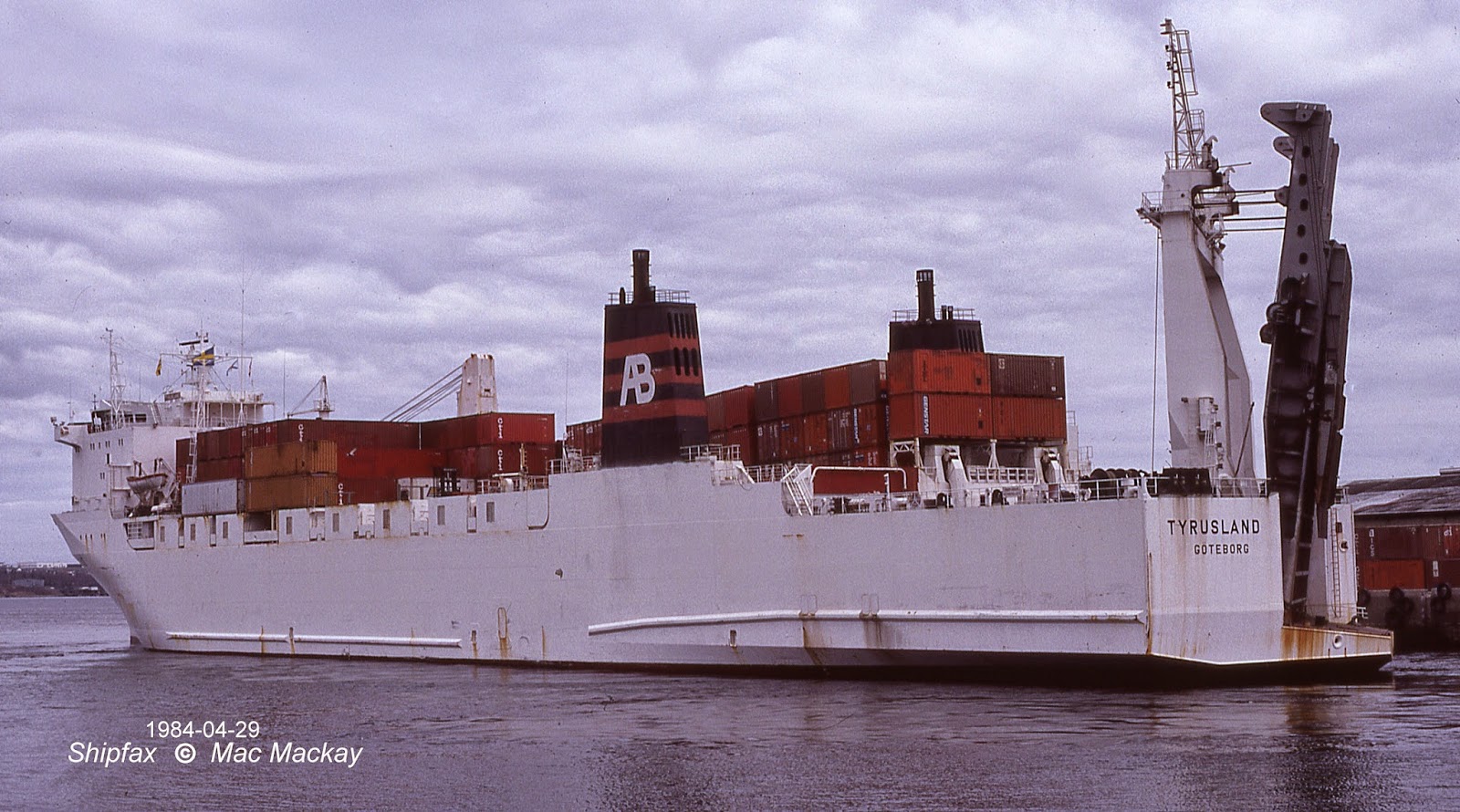 Tyrusland dated from 1978, built by Mitsui in Chiba, Japan. It wears the Axel Brostrom funnel mark, because Brostroms owned Rederi AB Transatlantic at the time. It was on loan to the Barber Blue Sea fleet and not a regular member. It was chartered out as Jolly Orca from 1984 to 1985 when it reverted back to Tyrusland.  It was lengthened 10 meters in 1995 increasing its grt to 20,882, and deadweight from 12,007 to 16,600.

Tana, 792 TEU, launched in 1983 by Tsuneishi shipyard in Nakamura, Japan as Seki Rodessa was chartered to Wilhelmsen from 1983. In 1999 it became Seaboard Panama II and worked the Caribbean/ South America/ Panama region. It was renamed Seaboard Victory in 2001 and became Victory in 2013 on its way to Alang where it was scrapped in June of that year.

Wilhelmsen's switch to RoRo only - no containers - has now been completed with all the former Con-Ros scrapped or sold, and only new purpose built car and truck carriers in the fleet. Their joint fleet with Wallenius is prominent in the RoRo world, and are frequent callers in Halifax.

The high capital cost of ConRos meant that shipowners needed to keep them operating even after other ships of the same age would have been ready for retirement. The growth in the pure RoRo market and the consolidation of container lines meant that the mix of RoRo and container was not paying off. Wilhelmsen is a big operation, but not big enough to take on the container  majors, and wisely opted to concentrate on the RoRo sector.

Although not connected with Wilhelmsen by 2004, former partner Rederi AB Transatlantic was gradually ceding ownership of the Atlantic Container Line to the Grimaldi Group. When ACL needed substitutes during regular drydockings of its five ships, it found Con-Ros wherever it could. Ignazio Messina + C SpA of Italy had gobbled up many of the aging Con-ros, one of which was the former Akademik Gorbunov. Built for the USSR by Gdanska Lenina in 1986 the 22,383 ship had a capacity of 1100 TEU and 230 cars. In 1996 it went to Messina as Jolly Giallo, then in 2004 was renamed Scan Carrier. It was with this name that it made one visit to Halifax for ACL August 21-22, 2004. Its name would certainly suggest Scandinavian ownership, but it may have been a charter name only. Always impressive, the Russian ships looked like speedsters even when steaming slowly out of Bedford Basin and through the Narrows. 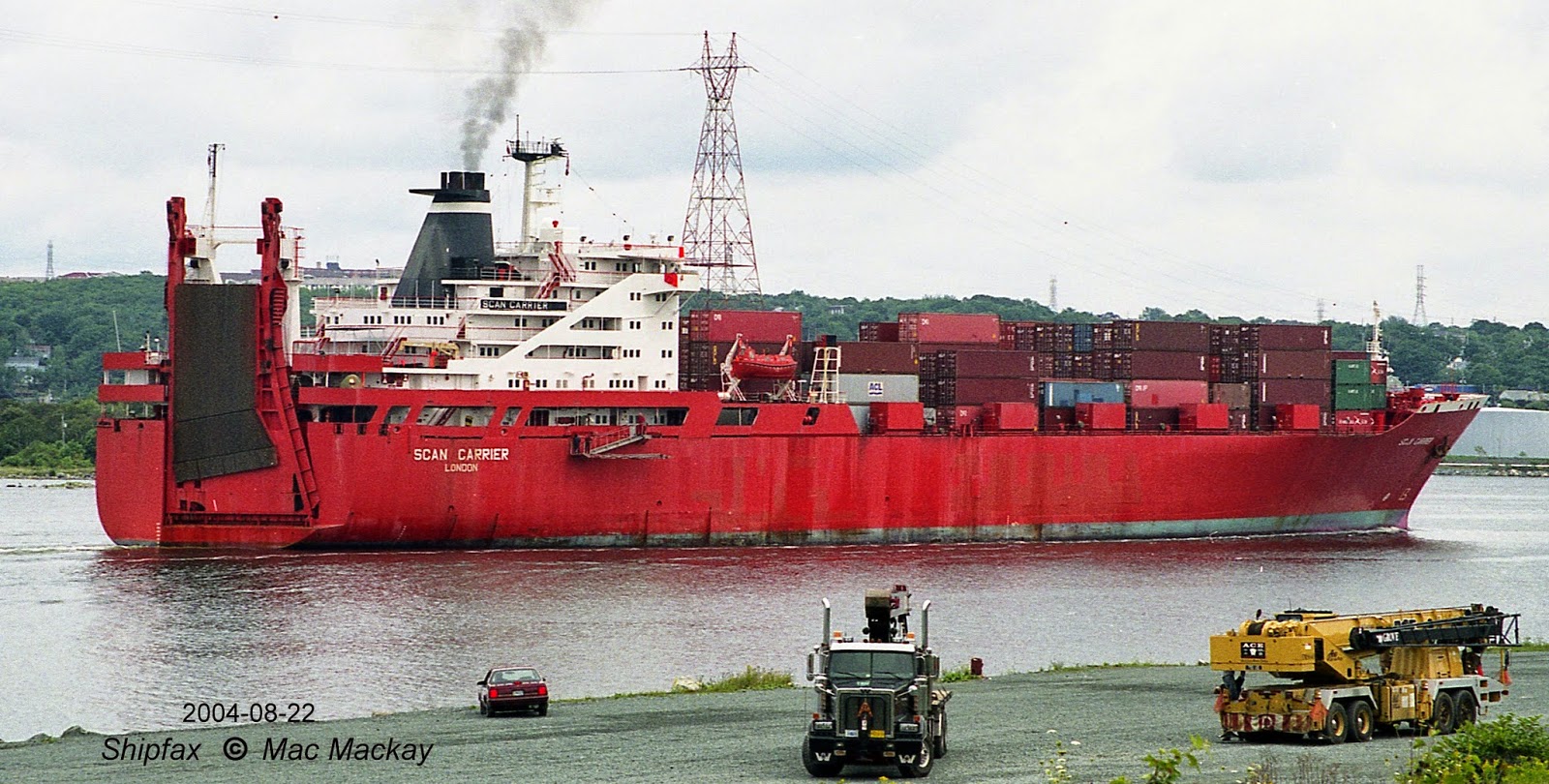