The bulker Lowlands Boreas anchored for bunkers this morning. The ship is a fairly new one, built in  2013 by Zhejiang East Coast Shipbuilding in Zhoushan, China for the Belgian company Cobelfret. The ship has the bluff bow now favoured among ship designers. By eliminating the bulbous bow and making ships lines fuller at the bow they can increase carrying capacity without reducing efficiency at moderate speeds. 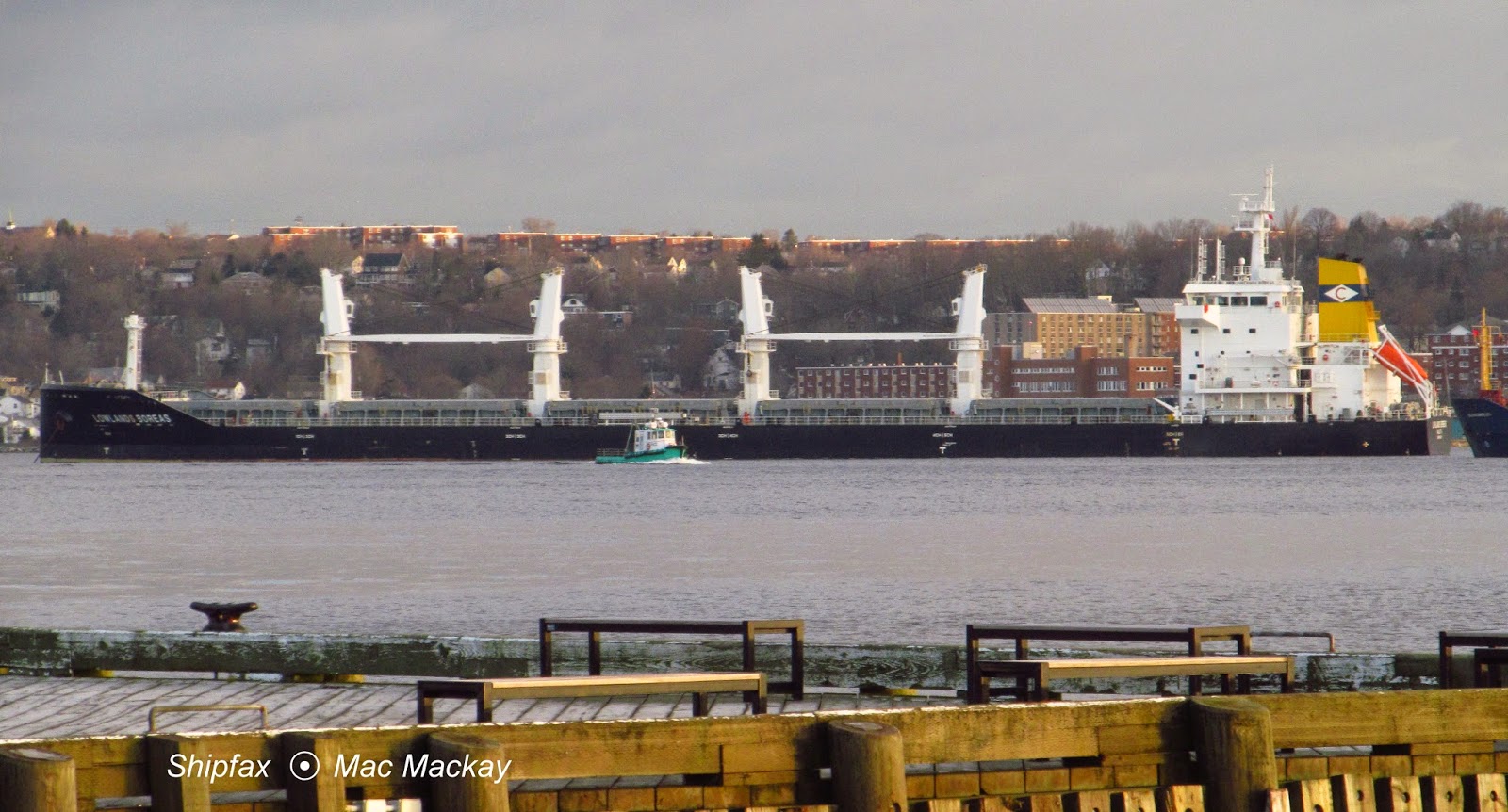 The launch Halmar has disembarked the pilot and is heading for base, while the bunkering tanker Algoma Dartmouth prepares to come alongside. Lowlands Boreas is deep laden with bauxite from Guyana.

The ship measures 24,177 grt, 37,144 dwt and flies the Maltese flag. It primarily carries bauxite for RioTinto Alcan, and is heading for Quebec.

The ship's remarkably low freeboard makes one wonder how much water it must have on deck when at sea. There is also the issue of liquifaction of cargo, which has happened from time to time with bauxite.

Bonus:
One memorable incident involving a ship loaded with bauxite was the Saguenay Terminals ship Sunmont. It arrived in Halifax the evening of May 11, 1967 with a list estimated at 12 to 14 degrees 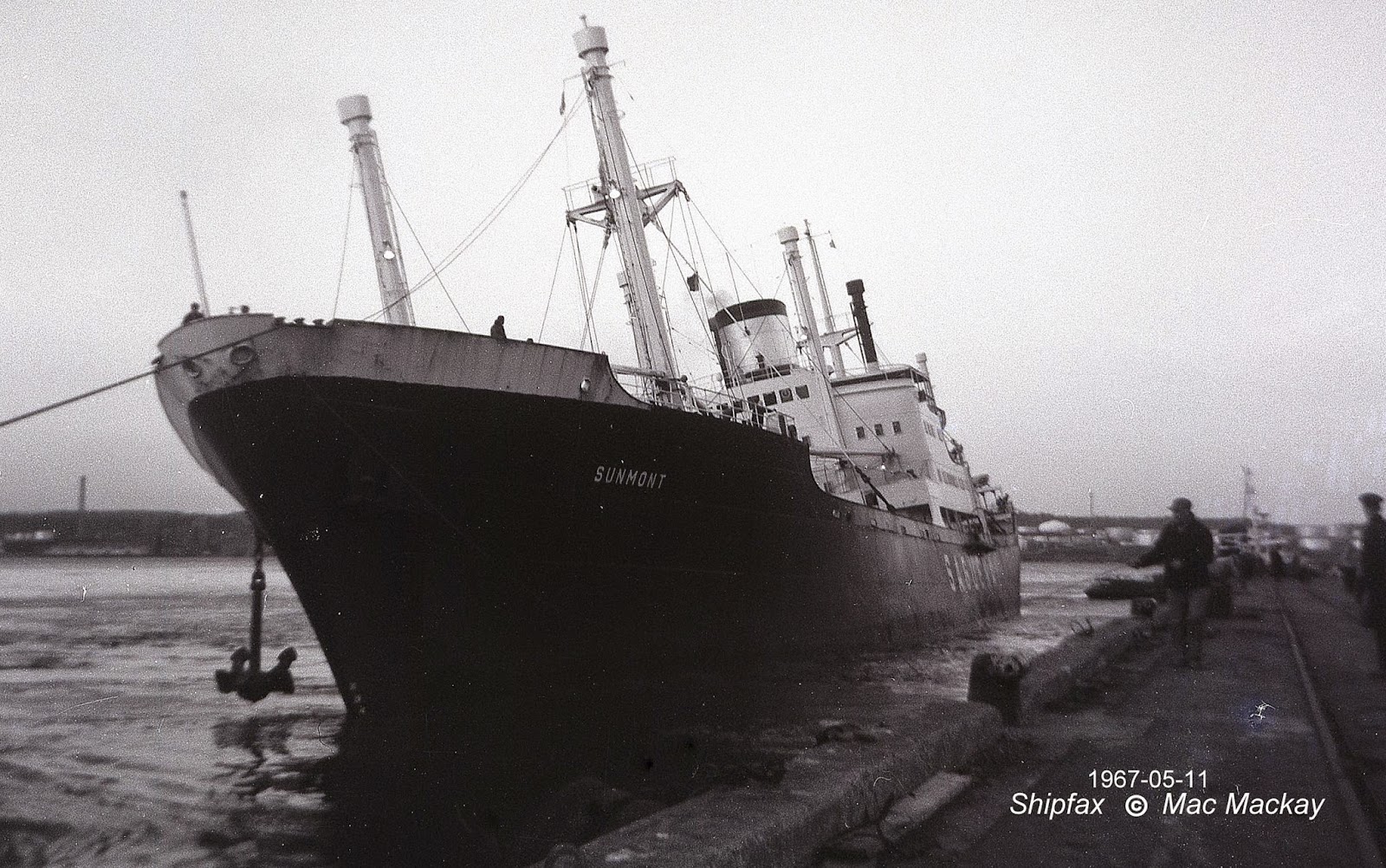 The ship had run into bad weather en route from Guyana to Port Alfred, QC. It came into Halifax for survey and restowing of cargo before continuing its trip. No matter how the cargo shifted, it was certainly in peril for some time until it was safe in Halifax harbour and the ship's relatively high freeboard gave it a margin of safety. More modern bulkers, with self trimming holds and high hatch comings are supposedly safe from shifting cargoes. However cargo liquifaction changes the volume of the cargo in addition to its characteristics, so that it behaves like a liquid. Bauxite that is stored in wet conditions or becomes wet due to leaking hatches is particularly subject to this phenomenon.

Sunmont was built in 1955 as Bow Canada for A/S Rederi Odfjell of Norway, by Kieler Howaldtswerke in Kiel, Germany, it was renamed Nopal Express the same year. In 1957 it was sold to to Cie Nationale de Transports Maritimes of Belgium and renamed Liège. In 1964, under the ownership of Olaf Pedersens Rederi A/S it became Sunmont for a charter to Saguenay Terminals, the shipping arm of the Aluminum Company of Canada.
Not long after the incident above, it was sold to a series of Liberian corporations and became 67: Sunny Lady, 70: First Lady, 72: Avra and 73: Golden Queen, (the latter under the Panama flag). It was with that name it arrived in Kaohsiung June 16, 1973 to be broken up.

Plus:
Speaking of issues with cargo, BBC Maryland sailed this afternoon after a couple of days alongside pier 27. It did not seem to work any cargo, so may have been in port to re-stow something either on deck or below.