Where Have All the Con-Ros gone - Part 2

Among the Con-Ros gone from the scene were some very impressive looking ships:

Tadeusz Kosciusko, first in the series, completed in May 1981 by Chantier Naval de la Ciotat, makes its way west of George's Island, inbound in Halifax to Fairview Cove. Its very wide bridge was a distinctive feature-also very handy in the winter North Atlantic.

Outbound Kazimierz Pulaski, second in the series, delivered in July 1981 and built by Chantiers de l'Atlantique, St-Nazire, shows its stern ramp and after deck container guides. The RoRo decks were in the aft portion of the ship only.

Stefan Starzynski, fourth and last of the ships in the series, was delivered by l'Atlantique in December 1981.


The fleet was dispersed in 1993 as POL shifted its concentration to bulk carriers.

Tadeusz Kosciuszko became Gebe Oldendorff in 1992, when that company took over Hoegh Lines.
In 1993 Neptune Line purchased the ship and renamed it Neptune Lazuli, removed its RoRo ramp and hatched over its after deck, installing cellular holds in the former car decks. Its container capacity was increased to 2002, with 324 refrigerated. A new wheelhouse was built above the original wide bridge to give visibility forward to meet visibility regulations.
It then went through a series of spot charters from 1994: Singapore Express, 96: Choyang Sydney, 98: Maersk Hakata, 99: Asia Star, 99: P+O Nelloyd Piraeus,00: P+O Nedlloyd Khaleej, 00: P+O Nedlloyd Malacca, 02: P+O Nedlloyd Nina  until it went for scrap in China in 2006.

Stefan Starzynski went first to Oldendorff Carriers as Gerdt Oldendorff, but in 1994 was acquired by the National Shipping Co of Saudi Arabia as Saudi Riyadh and remained a Con-Ro.

Its most notorious arrival in Halifax was February 27,1999 after it had been caught in a storm. There was mayhem below deck, with scores of cars and farm machinery scrambled into a mass of scrap metal.

A used school bus headed for Saudi Arabia seems to have survived the mayhem in decent shape, but dumpster are lined up on the dock for debris. 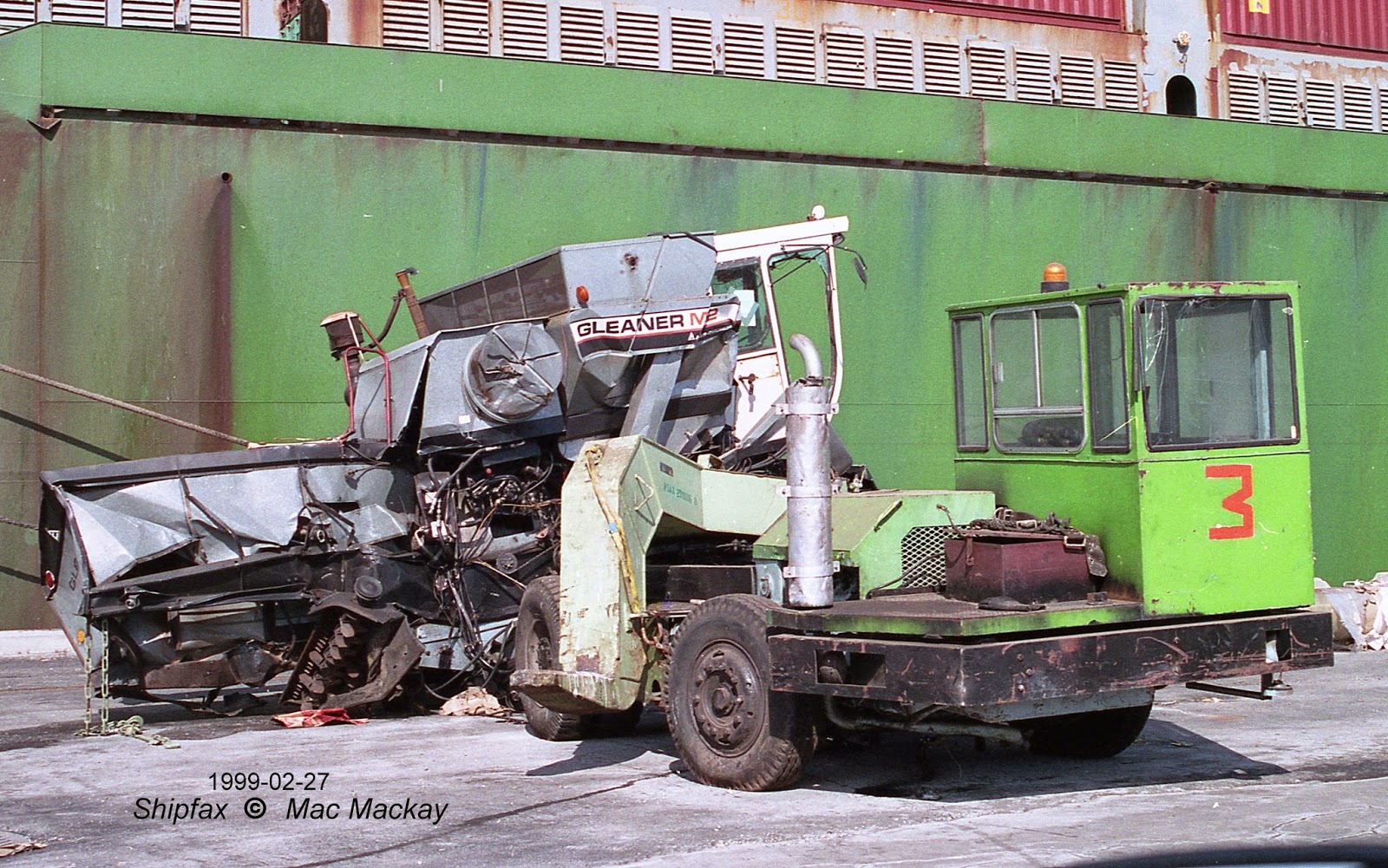 A new meaning for the term "grim reaper". Note the louvers for the car deck, which line the sides of the after weather deck.  The ship carried its own yard spotters to handle Mafei trailers and other RoRo cargo independently of shore facilities.

In 2001 Saudi Riyadh became Jolly Oro under the Italian flag, and arrived in Chittagong February , 12, 2012 as Oro, where it was broken up.

Kazimierz Pulaski became Hinrich Oldendorff in 1992, Prymont Bridge in 1993, and  Australia Star as Oldendorff continued the former Hoegh service. In 1999 they sold it to P+O Nedlloyd, where it became P+O Nedlloyd Taranaki, and lasted until December 2005 when it arrived in China for breaking up. It remained a Con-Ro until the end.

Wladyslaw Sikorski, completed in October 1981 by La Ciotat -third in the series. 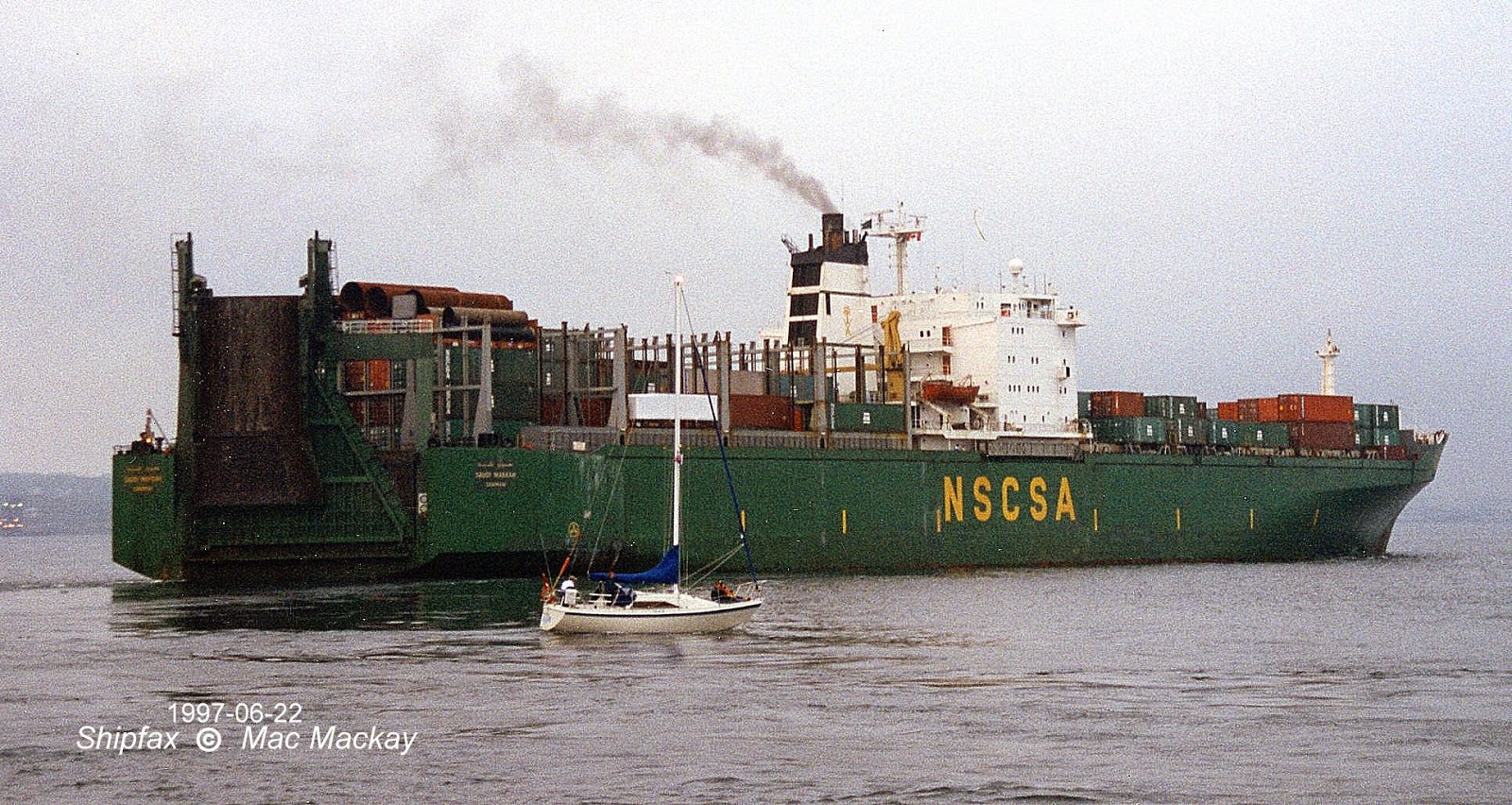 These ships were without doubt the best looking ConRos, but are now just a memory.