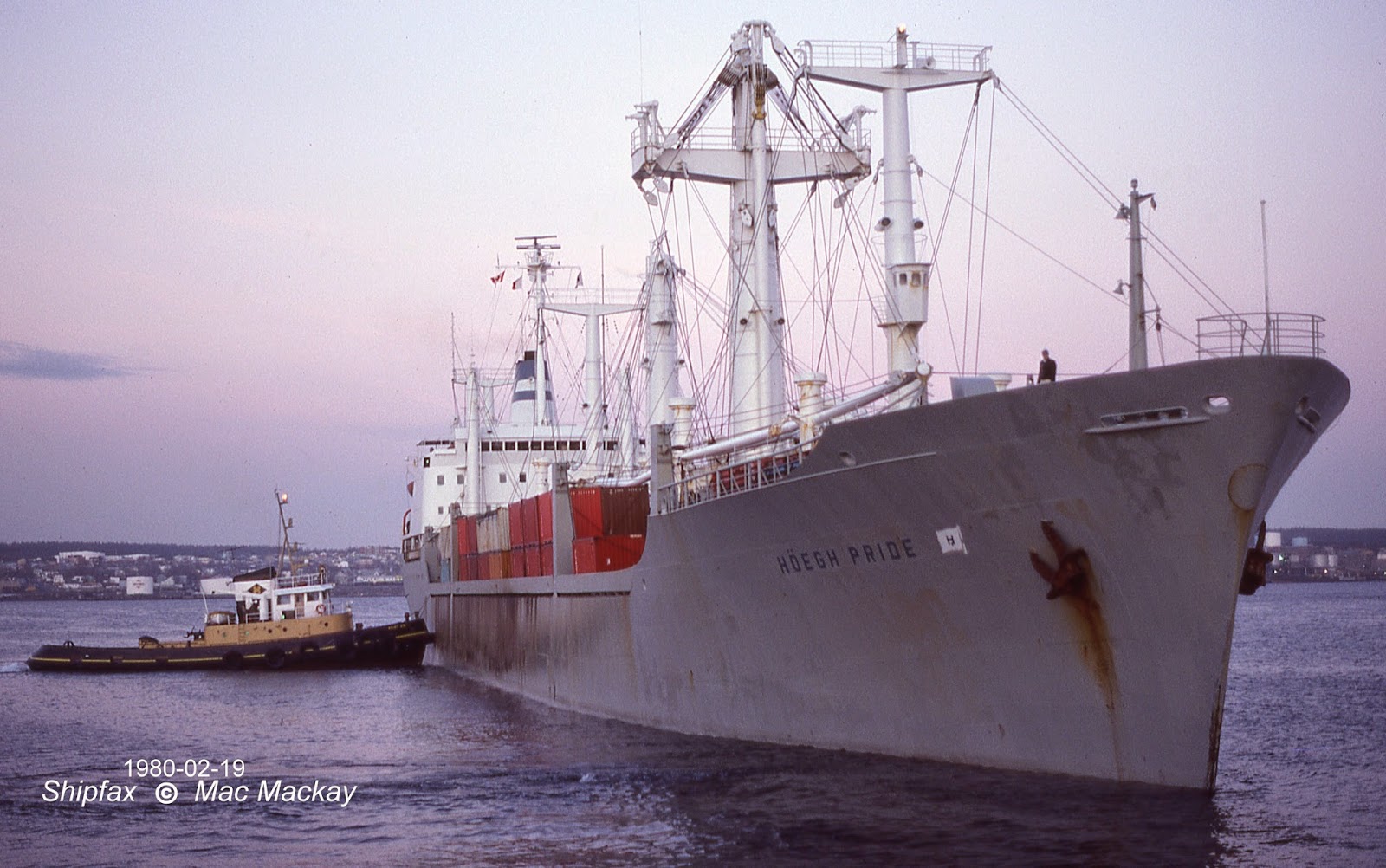 In the 1970s the container age had caught up with the lines trading to the far east, and the transition from traditional break bulk cargo ships began. Among the lines effected was Höegh Lines, a long established and dynamic Norwegian company, based in Oslo.

Founded by Leif Höegh, the company took delivery of its first ship, a tanker, in 1928. Since then, often on the forefront of developments in shipping, Höegh has grown and prospered. The company's web site gives a brief overview of that development: hoegh.com

It may be of interest that Leif Höegh (1896-1974), after studies as an economist, apprenticed at Kerr Steamships in New York, then worked for Wilh.Wilhelmsen. He then ordered his fist ship from A.P.Moller-Maersk's shipyard in Odense, Denmark (A.P.Moller may have been an investor too). The three companies have worked together over the years, and as of 2015 Maersk owns 37.5% of Höegh Autoliners, one of the two main branches of the company's operations. The other branch is LNG shipping and production.

Leif Höegh began general cargo liner operations in the 1930s (in association with Kerr's Silver Line) , in the Far East, between the Persian Gulf, west coast of India, Ceylon, Java, Sumatra, Malaysia, the Philippines and the west coast of the United States and British Columbia. During and after World War II, the line added the US Gulf and east coasts, Canada, Libya, Lebanon, Egypt, the Red Sea, Singapore and ports between.
By the 1970s they operated a fleet of traditional cargo ships, fitted to carry any and all types of cargo.

Built in 1964 by Atelier et Chantier de Dumkerque (France-Gironde) in Bordeaux, the ship measured 10,998 (other sources say 10,721) grt, 14,548 dwt. With its 7 cyl B+W (built under license by Soc.Forg. + At. Creusot) amidships, it was capable of 15.5 kn , a respectable speed for a general cargo liner of the day. It had a very complete suite of cargo handling gear, including one 80 ton jumbo mounted on bipod mast over number two hatch,  eighth 10 ton and ten 5 ton derricks. Not listed in Lloyd,s, but visible upon close examination of the photos, is another heavy derrick on a bipod mast over number four hatch. This might be a 30 ton or even a 50 ton capacity. 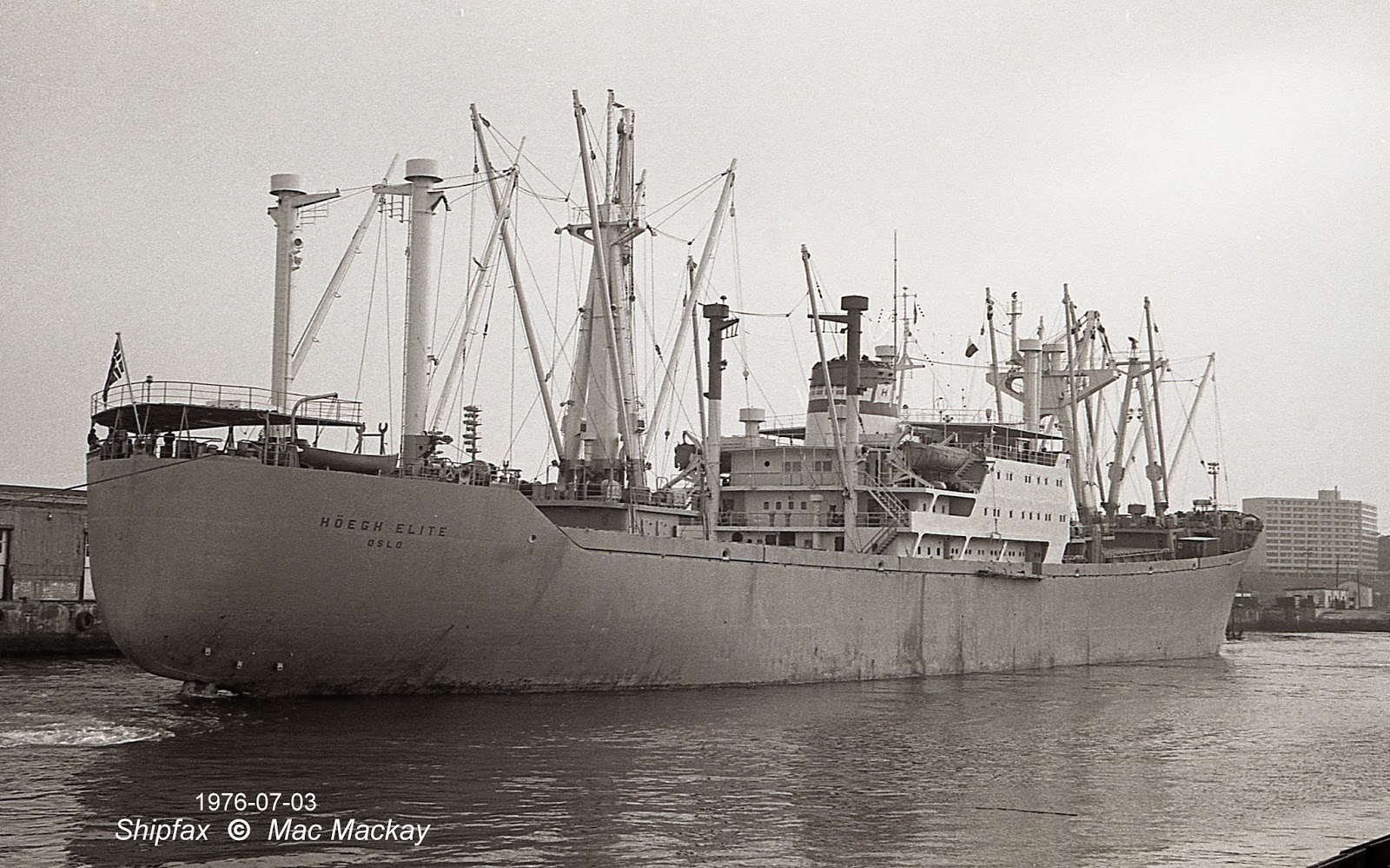 
By 1979 time was running out for general cargo ships on liner routes, and Höegh Elite went through a series of owners, all Panamanian, with the names, 79: Gurami, 82: Union Auckland, 83: Soppero, 84: Andrico Unity, 84: Bridgeport. It arrived at Huang Pu, China, February 9, 1985 where it was broken up for scrap.

"O" class
Höegh built a series of new ships in the late 1960s, with more modern features. With engines and accommodation far aft, they carried extensive cargo handling gear of one 80 ton, one 50 ton and no less than sixteen 10 ton derricks. All ships came from the O/Y Wartsila A/B shipyard in Abo, Finland. Each had a 6 cylinder Sulzer engine (built by Wartsila) of 10,550 bhp with controllable pitch prop and bow thruster. Their speed of 17 kn reflected the trend towards faster transit times on liner routes. 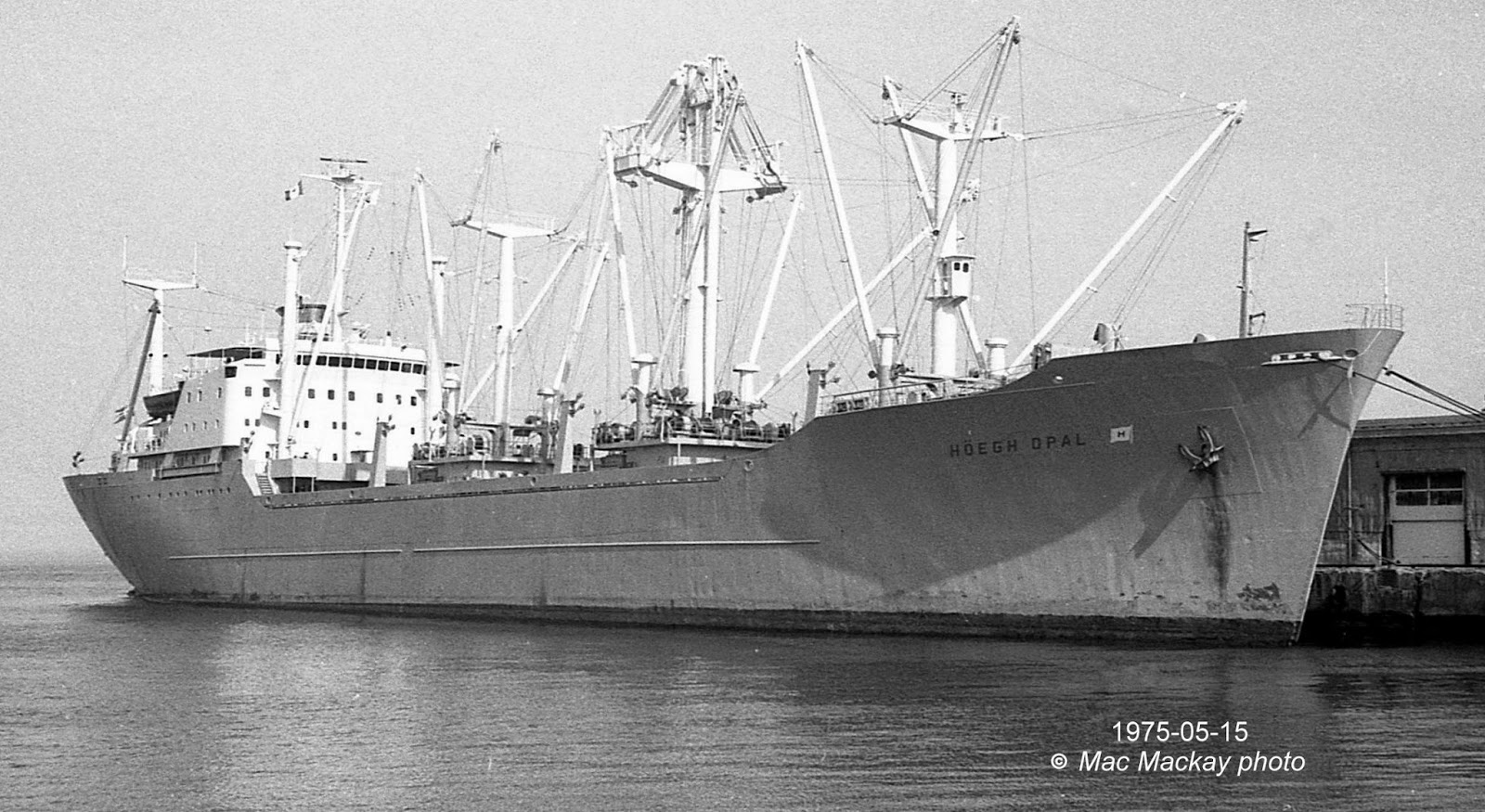 In 1975 the ships were lengthened nearly 12 meters, adding another hold and two 30 ton derricks. 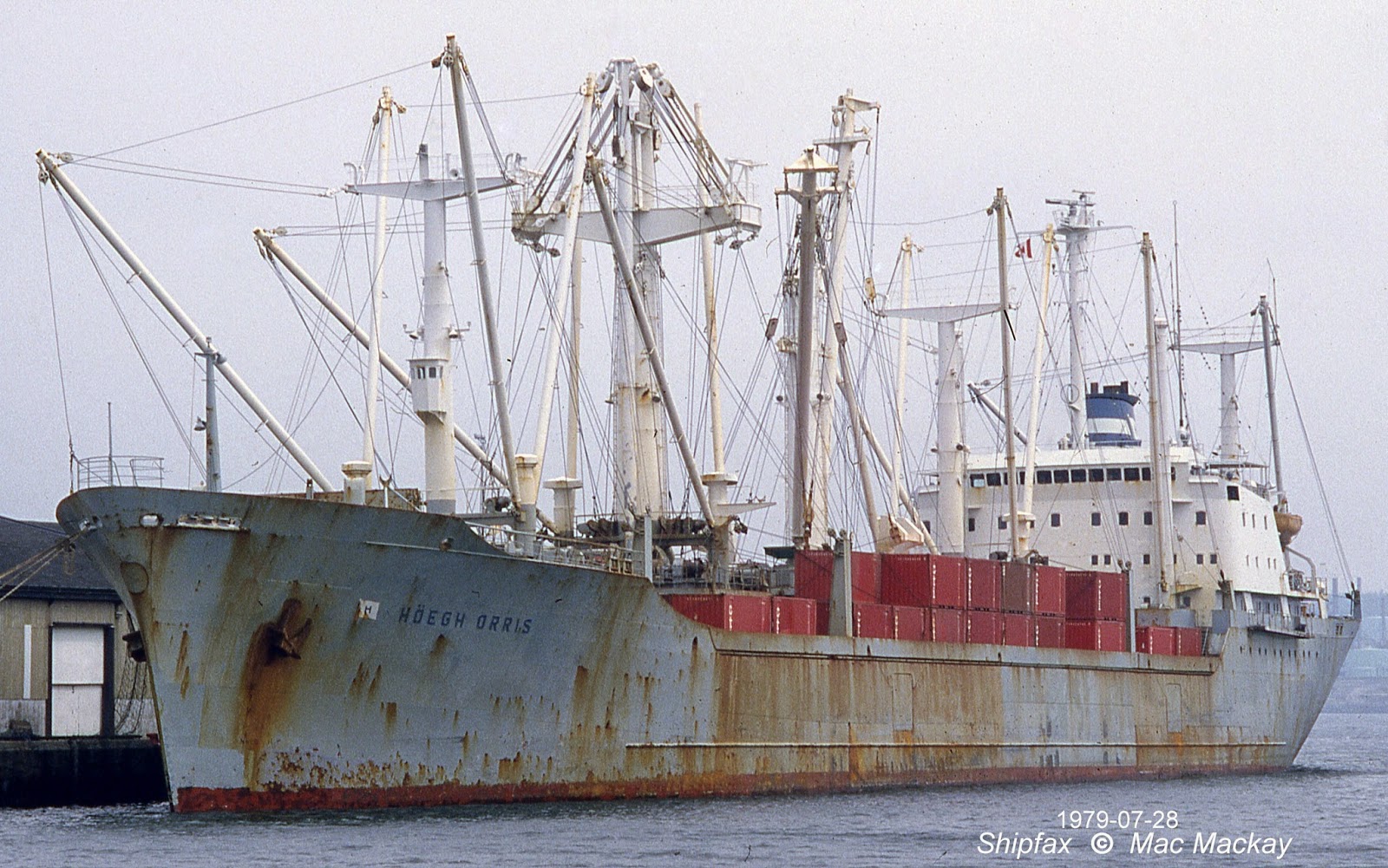 Höegh Orris as lengthened., with the inevitable containers on deck. Renamed Gama Pala in 1982, it became Herwang in 1985 and arrived in Shanghai for scrap in November 1993.

A similar P class of vessels was built by Wartsila, in Turku, Finland in 1970.  They were also built with engines and accommodation aft, and carried even heavier gear, consisting of one 120 ton, one 80 ton, and sixteen 10 ton derricks. They had a 6 cyl Sulzer (built by Wartsila) of 10,200 bhp driving a controllable pitch prop for 17 knots,and were equipped with a bow thruster.

Höegh Pride after lengthening.
(The navy tug Glenevis is helping out due to a high demand for tugs.)
The ship was sold in 1982 and converted to the livestock carrier Corriedale Express. In 2004 it became Kenoz for Jordanian owners, and is reportedly still operating under the Panama flag.

Gama
When Höegh Lines introduced a new series of open hatch type and combi-carrriers to the fleet, the remaining O and P class ships were re-branded from Höegh to Gama. They still called in Halifax, but may have served different ports or worked a slower schedule, or were just working their way out to new owners. 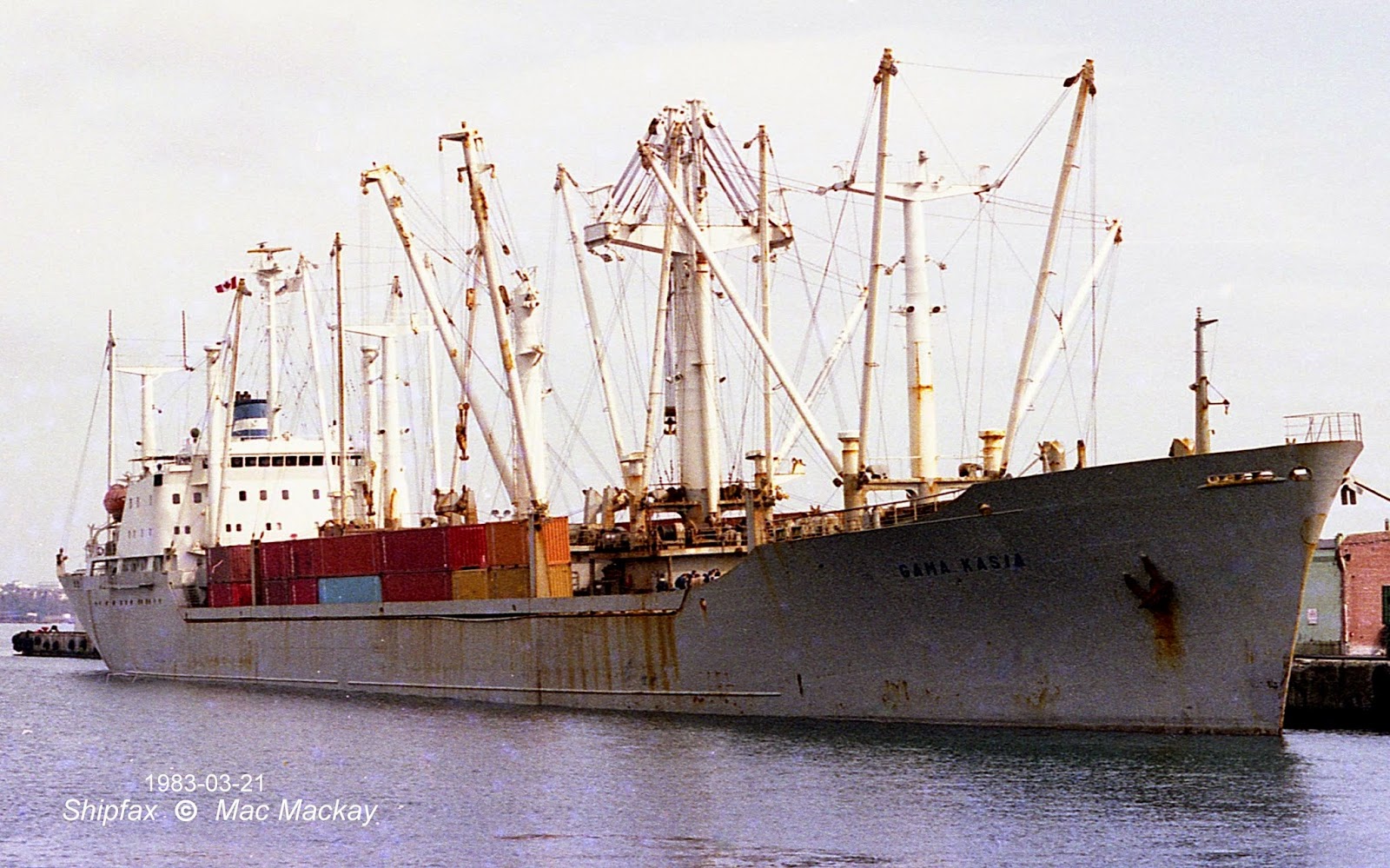 Höegh Lines were also pioneers in the auto carrying business, originally using bulk and lifting the cars on and off.  In 1970 they formed Höegh-Ugland Autoliners and converted former general caro ships to pure car carriers. In 2000 they bought out 50% partner Ugland becoming Höegh Autoliners. 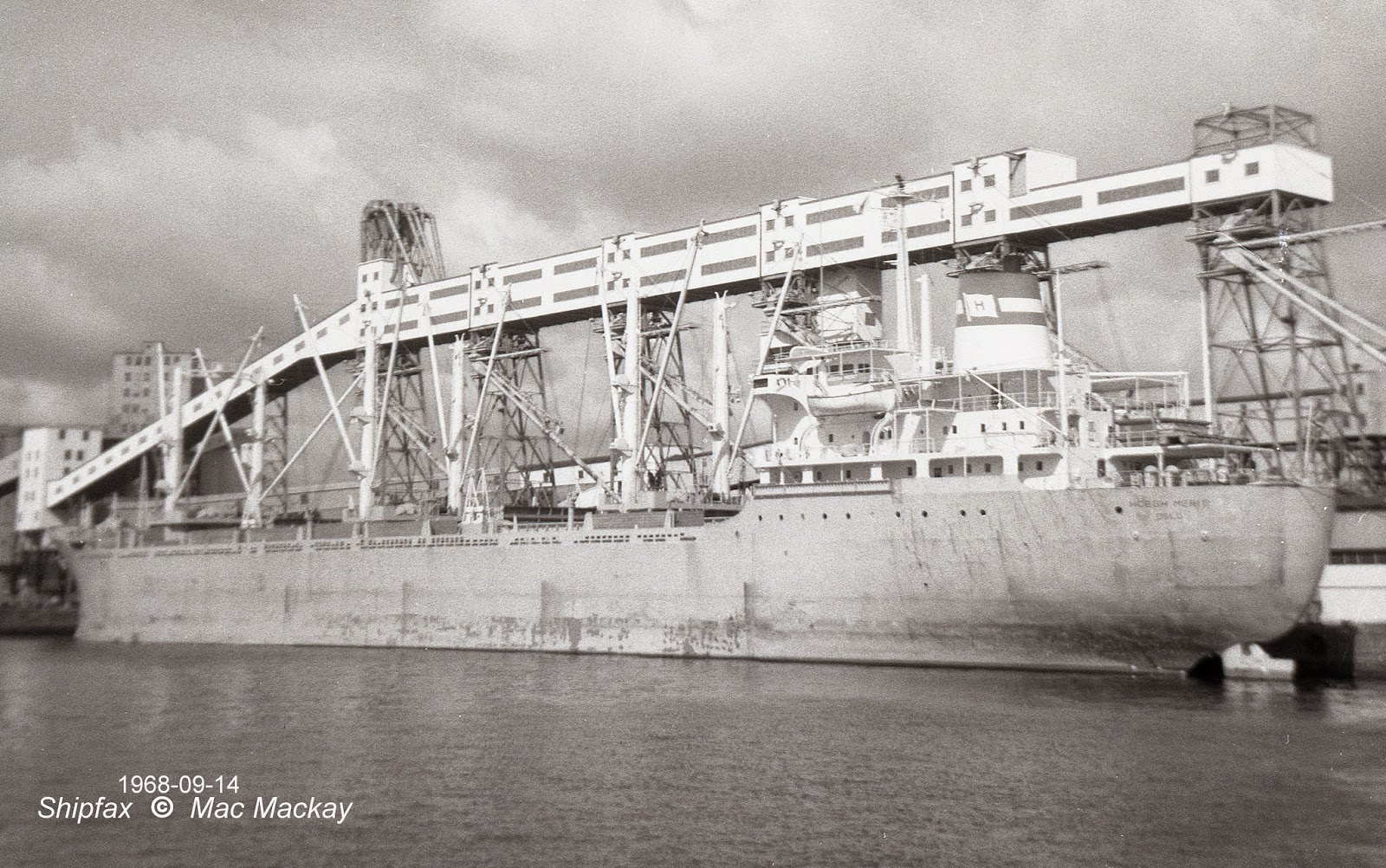 Höegh Merit came from the Hakodate Dock Co Ltd in Japan in 1966. It was built as a combination bulk carrier/ vehicle carrier. Once it delivered its cargo of cars, unloaded by its twelve 12 ton derricks, it moved is portable car decks out of the way, and could load bulk cargoes. Here the ship is loading grain in Halifax in 1968.
It was sold in 1975 becoming Barry for Immingham Shipping Co Ltd of Liberia, , later Eaton Shipping Co Ltd of Greece. In 1985 it became Aspen Falls for Liberian owners and arrived at Gadani Beach, Pakistan for scrapping April 24, 1986.