In the days before refrigerated containers and container ships dominated trade, much of Nova Scotia's fish exports was carried on refrigerated cargo ships. Some of these ships were quite small - no bigger than coasters, others stretched the limits somewhat, but could not be considered big ships. Depending on the season some of the same ships would carry potatoes or fruit and relocated to suit demand.
A chronological sampling from the 1970s and 1980s: 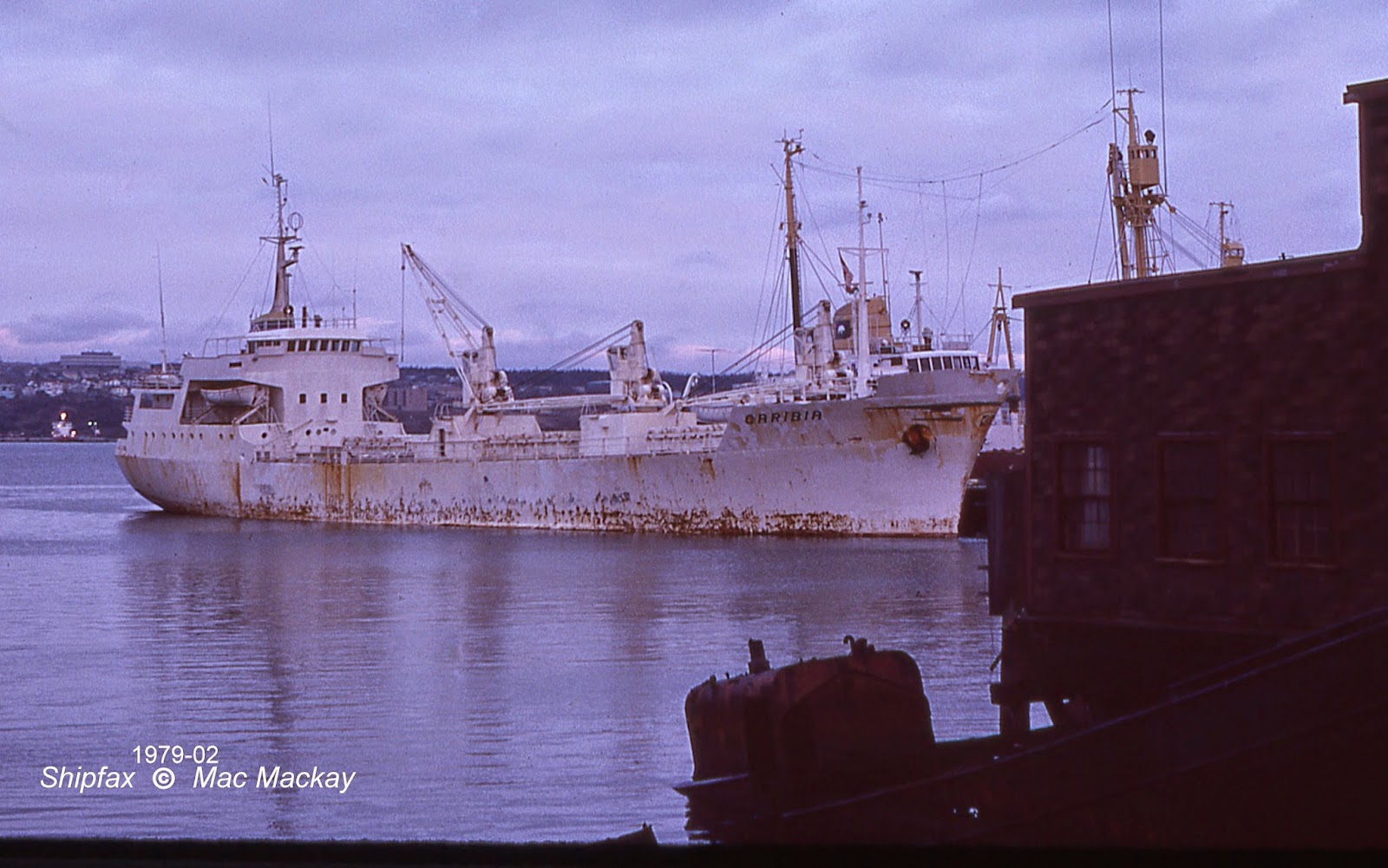 Sunset at Karlsen's wharf with the sealer/researcher MartinKarlsen on the south side of the wharf.

A frequent caller at Karlsen's wharf in Halifax, Caribia dated from 1967 when it was built by Ulstein, Ulsteinvik, Norway (now best known for its offshore vessels). Measuring a mere 497 grt, 1404 dwt, the ships was owned by A/S Norsk Frysetransport, and managed by Johan Hagenaes of Alesund Norway. It was sold in 1990 and renamed Caribic by Dutch owners, passing through Cyprus owners and renamed Askja in 1997 by Panama owners. It lasted until February 2003 when it was scrapped in Aliaga, Turkey.

Built in 1975 by Nystad's in Finland, this 1269 grt, 1666 dwt reefer is still in service. When it called in Halifax it was owned by Gustav Erikson under the Finnish flag. In 1986 the same owner renamed it Igloo Lion under the Cyprus flag, and in 1995 it was sold and renamed Sunny Lisa under Belize flag. It was under that name when it appeared in Halifax in December 27, 2006 for bunkers and stores. It now flies the St.Kits and Nevis flag and is reportedly still in service in the Baltic. 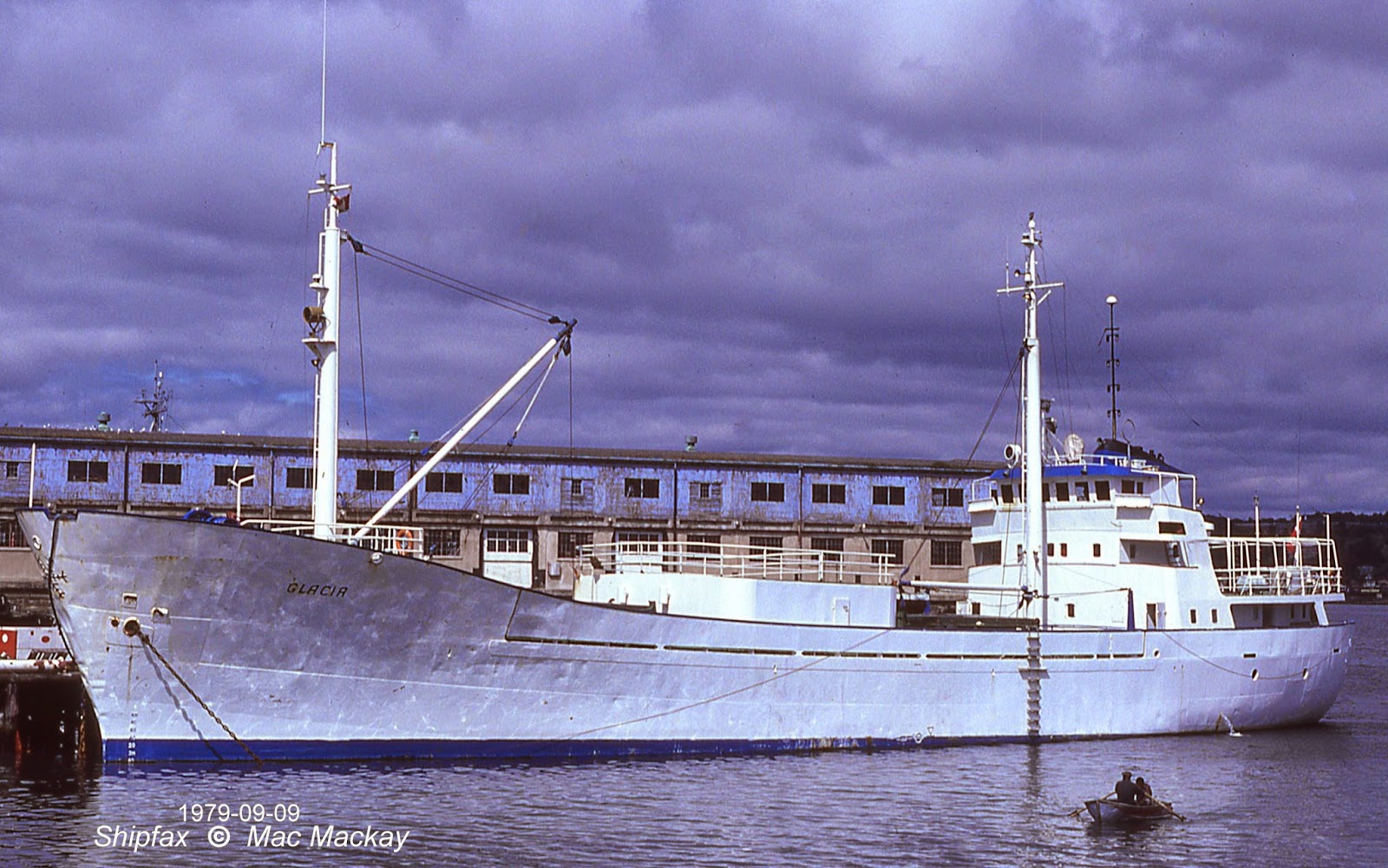 One of the smallest reefers to call in Halfax, Glacia measured only 299 grt, 732 dwt. It was built by Skala Skipasmidja, Skali, Iceland Faroes, Islands in 1968 and flew the Danish flag. It was sold in 1981 becoming Unicorn III; in 1982: Devon IV * and in 1985: Frio. It sank November 23, 1987 after taking on water for several days in the Yuctan Chanle off Cuba, en a voyage from Miami to Columbia, carrying general cargo.
[*  A later fleetmate Devon III ran aground in Rose Bay, NS, and spent several year laid up in Halifax.]

With a bit more of a deep sea look, Horus, Horus is at pier 34 to load.

Horus was built in 1969 by Cadagua in Bilbao, Spain. At 1580 grt, 1752 dwt it was large enough to be considered a short sea trader.  When in Halifax it was flying the Spanish flag for Cia Mar de Transportes Internacionales of Cadiz.  It subsequently carried the names 81: Tropicana, 88: Reefer Marina, 94: Iea Star, 94: San Hsieh 303, Panama registery. As of 2007 registers consider it to be "dead". 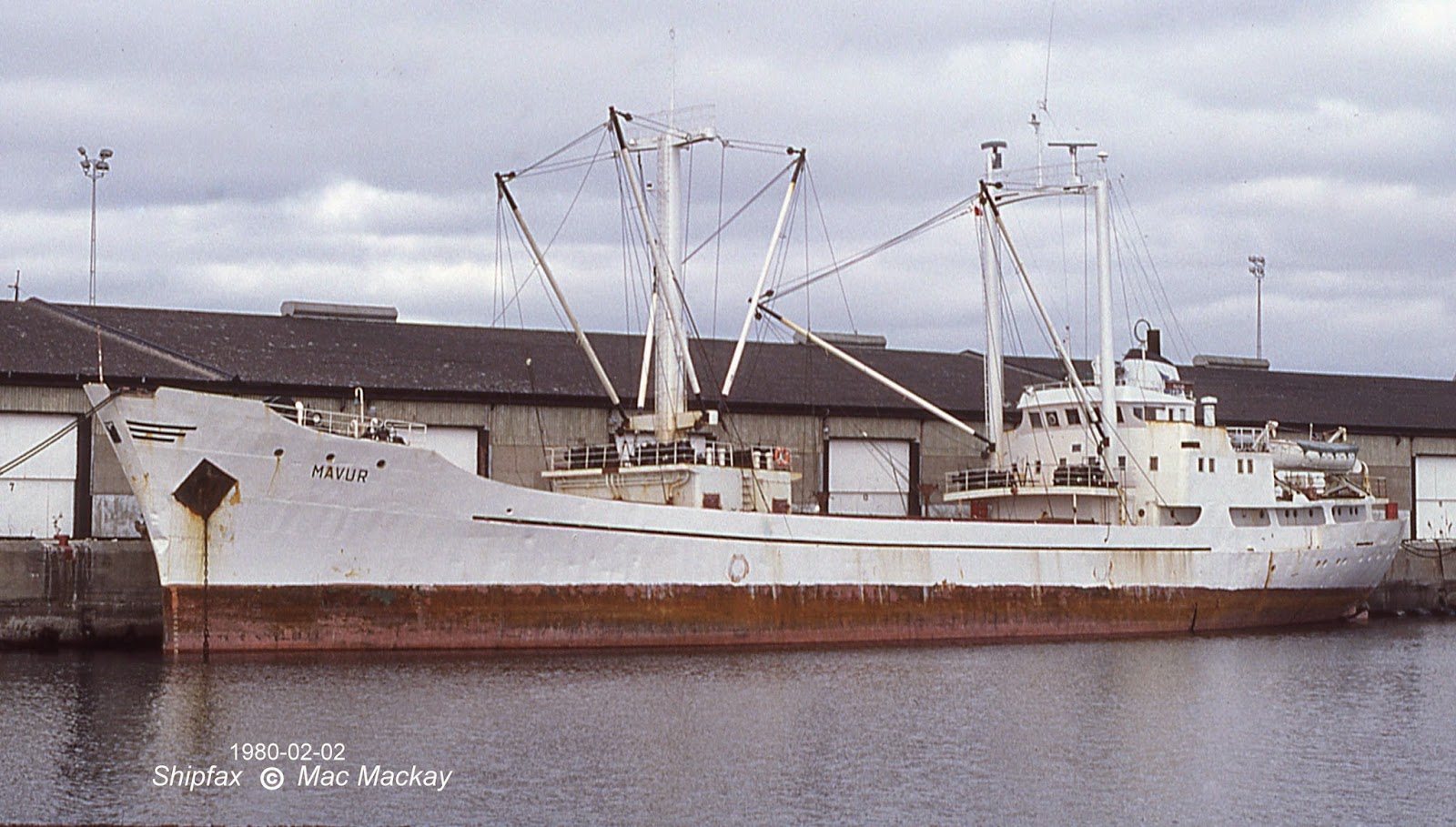 Mavur's painters were good on coverage (except behind fenders) but a little careless when it came to the waterline.

Also Spanish built, by ASTANO in El Ferrol, the ship was originally Glacial Azul for Transportes Fruteros del Mediterraneo SA [TRAFRUME] of Valencia. Icelandic owners Polarskip H/f bought the ship in 1976, renaming it Mavur. On October 2, 1981 the ship was wrecked in Vopnafjord, northeast Iceland, on a trip for Piraeus with salt fish. 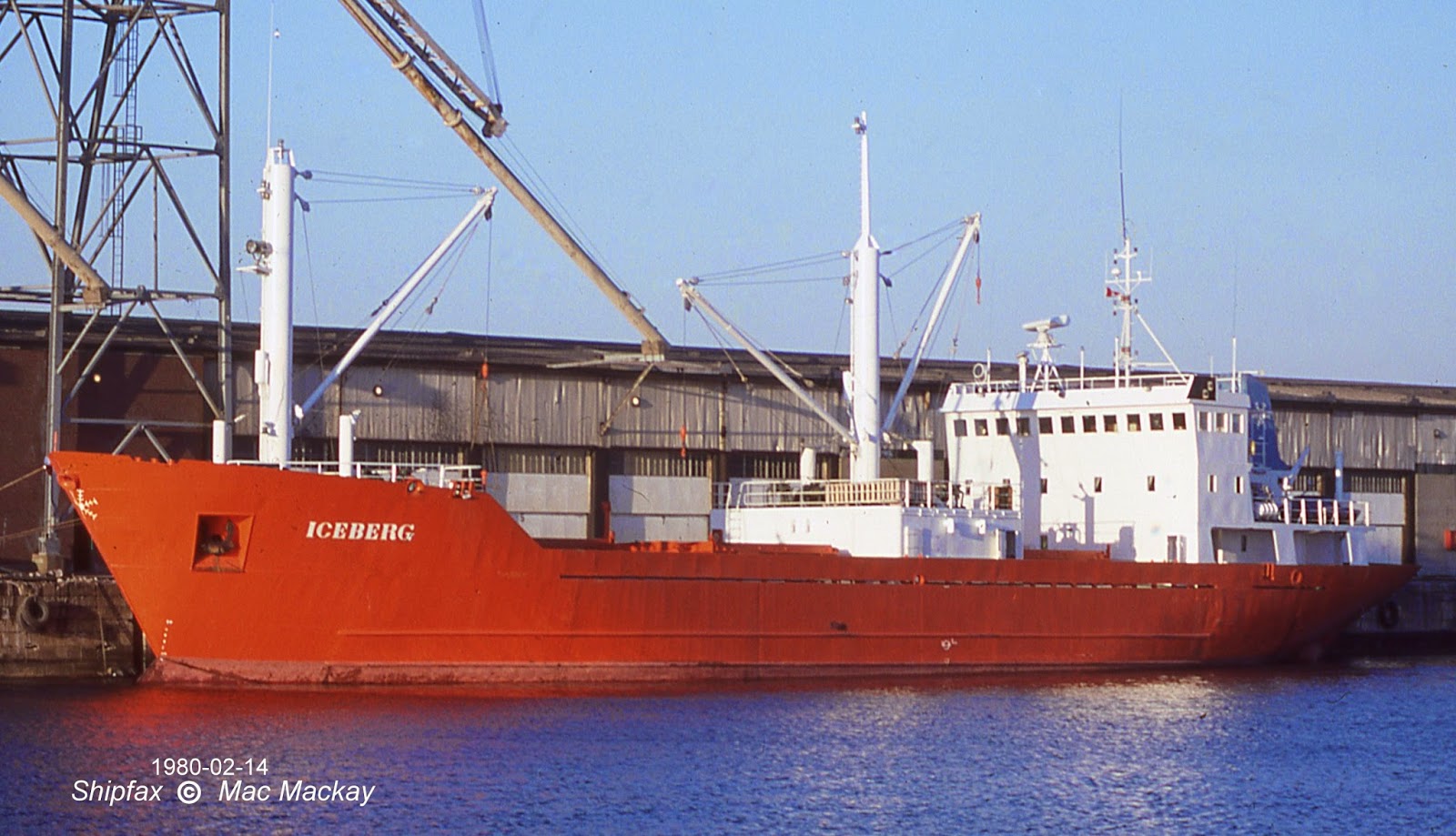 Red instead of white was the colour scheme for this reefer, tied up at pier 27. 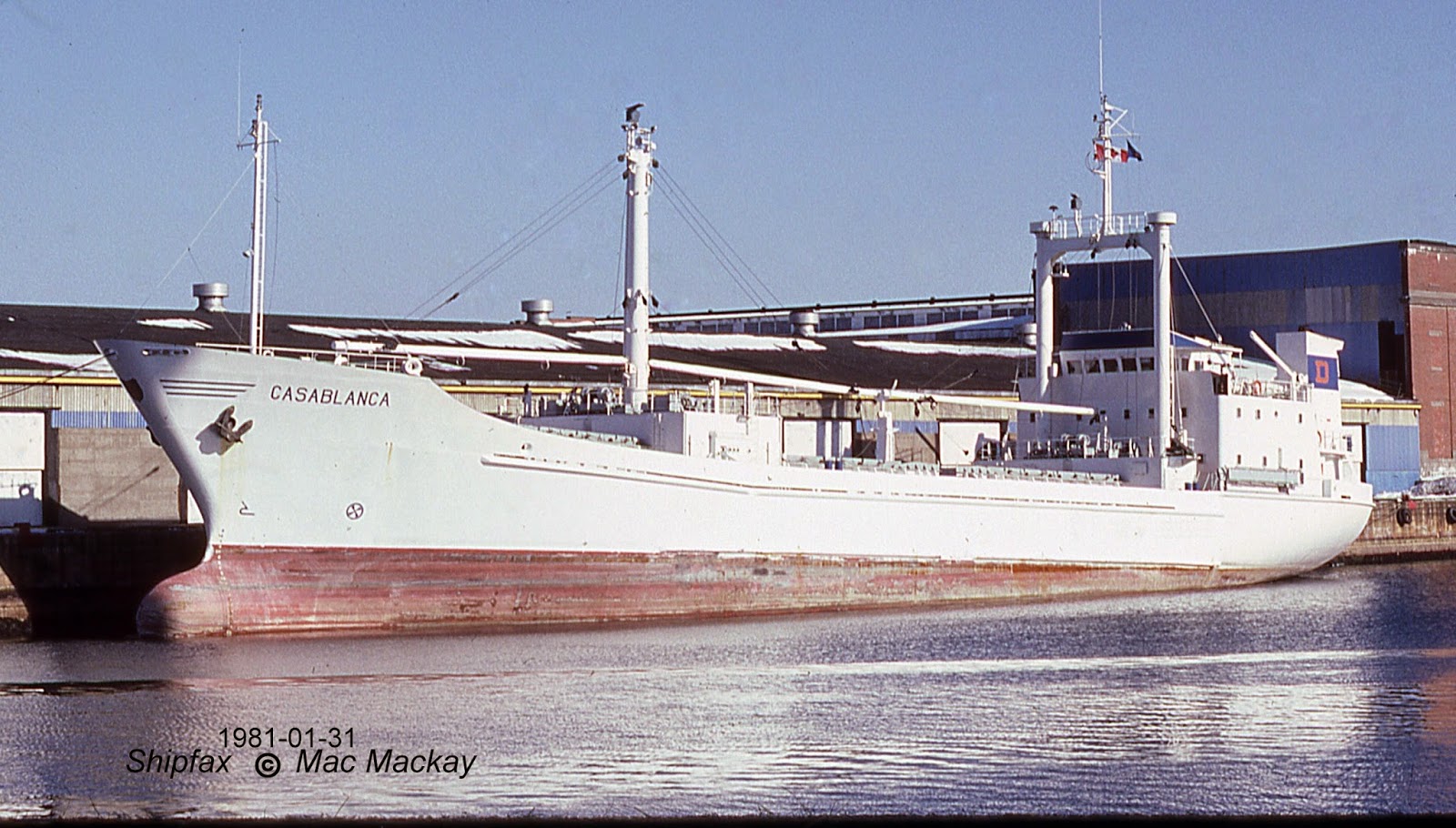 Casablance at pier 23, which may mean that it was unloading fruit, or loading potatoes.

Casablanca  was a new ship when it tied up at pier 23 in 1980. Coming from Nieuw Noord Nederlandsche shipyard in Groningen, earlier that year. Groningen has long been a hub for refrigerated cargo in the Netherlands, predominantly fruit, and owners Dammers + van der Heide have been prominent in that trade for many years. The ship measured 1195 grt, 2520 dwt.
In 1983 it was lengthened from 92.6m to 101.8m increasing tonnages to 2989 grt, 3536 dwt, and another mast and a 5 ton derricks were added.
In 1989 Seatrade Groningen (founded in 1951) took over Dammers + van der Heide's ships.

At 0500 hrs AST on November 5, 1991 the ship issued a Mayday 330 km SE of Halifax due to an engine room fire.  The crew managed to suffocate the fire, and cancelled the Mayday at 2100 hrs. However they had exhausted their CO2 supply and lost power. The tug Atlantic Elm took the ship in tow arriving in Halifax November 7. Repairs were completed and the ship sailed December 15, 1991. 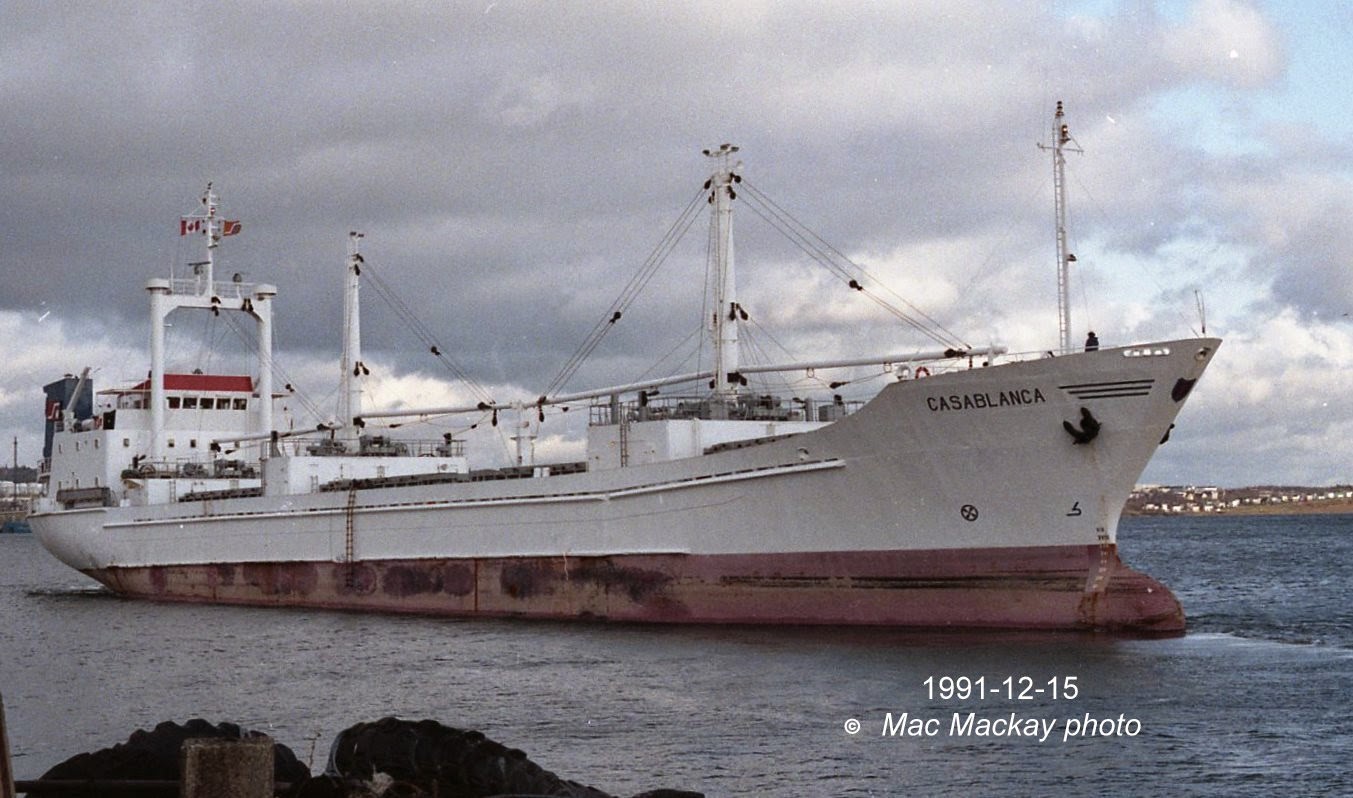 The lengthened version of Casablanca sails from Halifax after repairs to fire damage.

In 2002 Golden Arrow Marine of Bangkok, Thailand bought the ship and renamed it Chainavee Reefer. It flew the Panama flag until 2013, then moved to Honduras flag. As of late 2014 it was reportedly still in service. 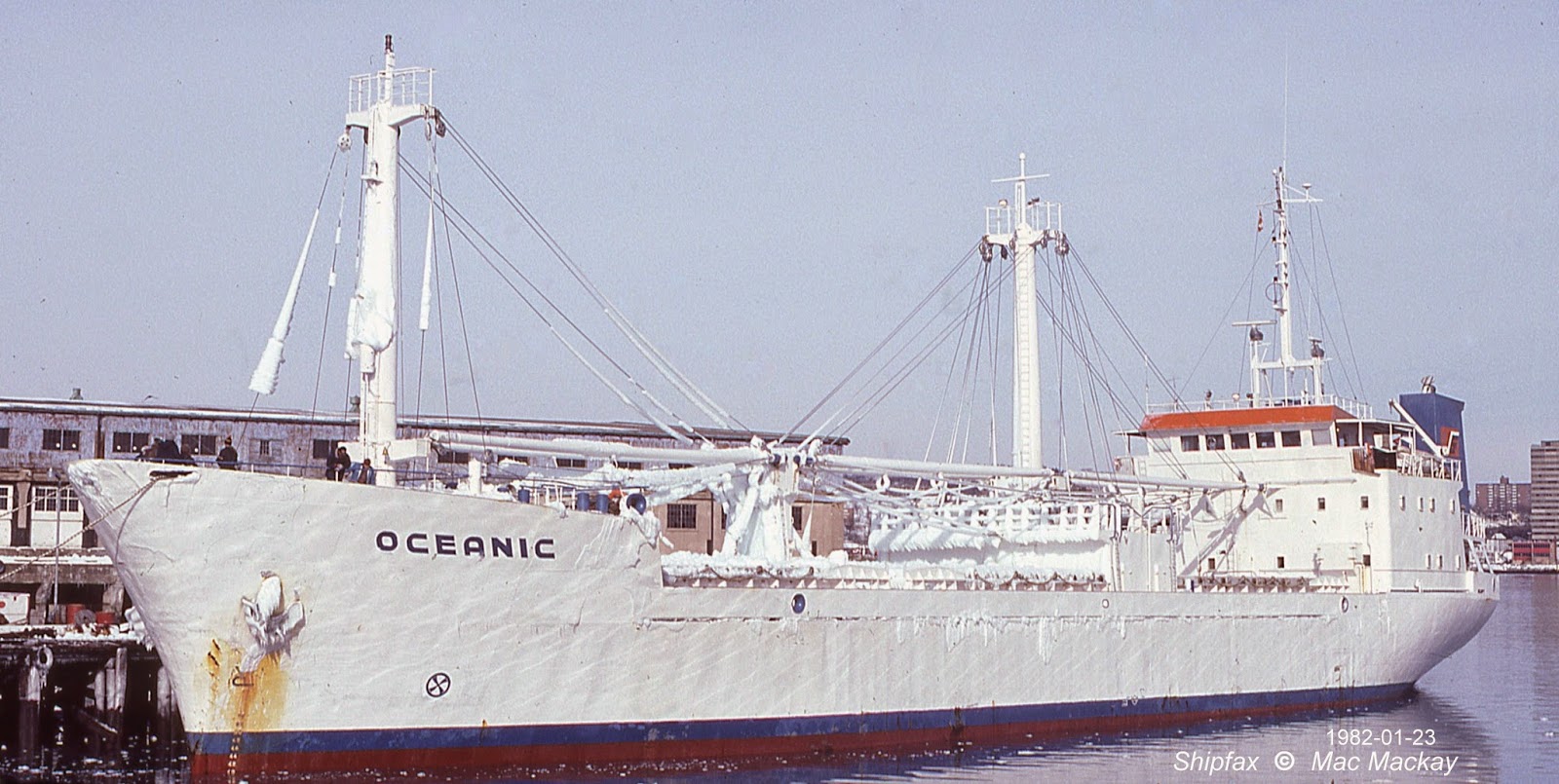 Oceanic, iced over inside and out, at Karlsen's wharf.

Another member of the Seatrade Groningen fleet, Oceanic dated from 1977 and also came from the Nieuw Nederlansche shipyard in Groningen.A ship of 1142 grt, 2404 dwt, it became Oceanic Ice, also with Seatrade, in 1988 and in 2005 it was renamed Saint Gottard by new owners. It passed to Falcon Reefers (managed by Seatraffic of Sevastopol, Ukraine) under the Cambodia flag.in 2007 as Kamanaga. Last July it was reported in Walvis Bay, Namibia, with the notation "to be broken up."

The sweeping bow and flush deck were a Dammers trademark


With the decline of the fishery, and the convenience temperature controlled containers, small reefers are seldom seen in these parts now. There have been rare sightings since the 1990s, but those are for another posting.