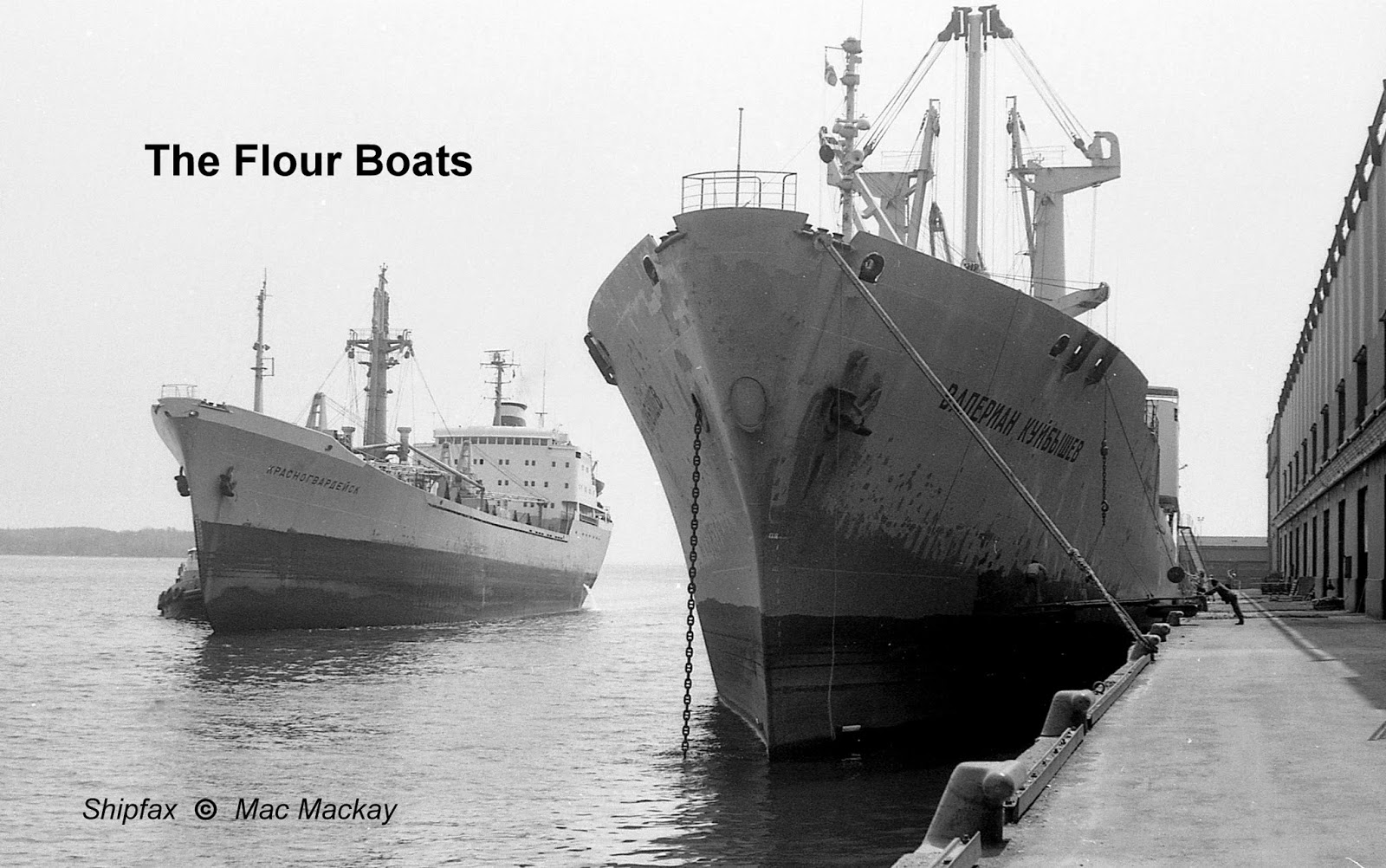 Krasnovardeisk arrives as the crew uses a novel approach to painting Valerian Kybyshev.

From the 1960s, to the late 1980s there was almost always at least one ship in Halifax loading flour for Cuba. These were ships of the Baltic Steamship Co of the USSR and loading was labour intensive. The flour, produced by Dover Mills (now P+H) was bagged and palletized, then stored in the freight sheds at pier 21 and 22 and sometimes pier 23. It took up to a month to load on day shifts only, - no overtime and no weekend work

There was an interesting array of ship types. Despite general similarities, the ships were members of different classes, with different types of cargo handling gear, but almost all came from the same shipyard.

The majority of the ships were of the Klin class, but there were Vyborg, Kasimov, Irkutsk, Novgorod  and other classes. They were generally about 9,500 grt, 12,000 dwt with engines and accommodation 3/4 aft.
At the time the USSR had no real shipbuilding industry, so relied on its Baltic neighbors, such as East Germany, Poland, and Finland to build its ships. By far the majority of the flour ships were built by Crichton-Vulcan, in Turku, Finland. This goes some way to explaining their stylish good looks. They were also built to a high ice class and fitted with reliable engines. 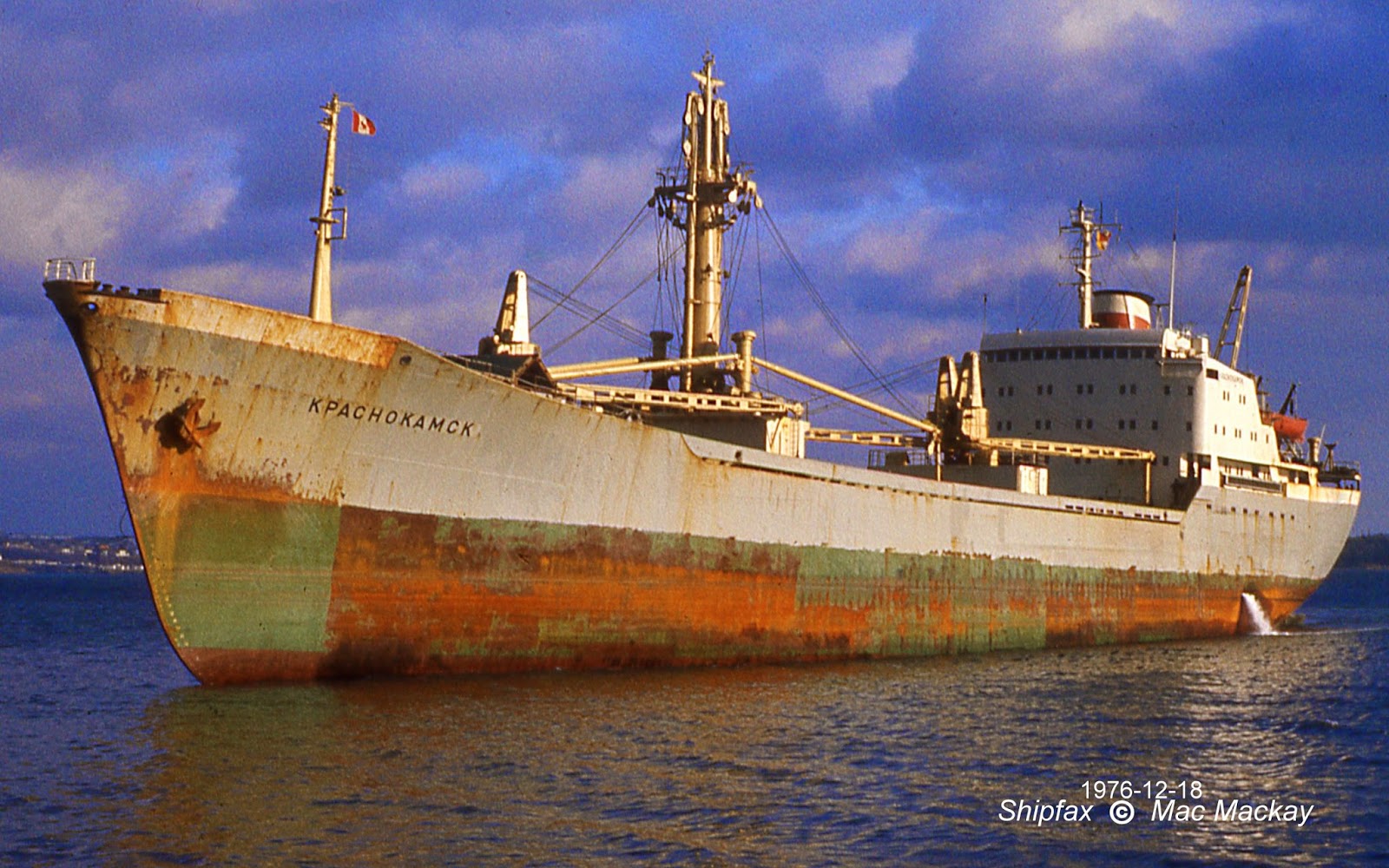 Krasnokamsk arrives in ballast - ready to load. Built 1966, broken up in Alang December 1993. 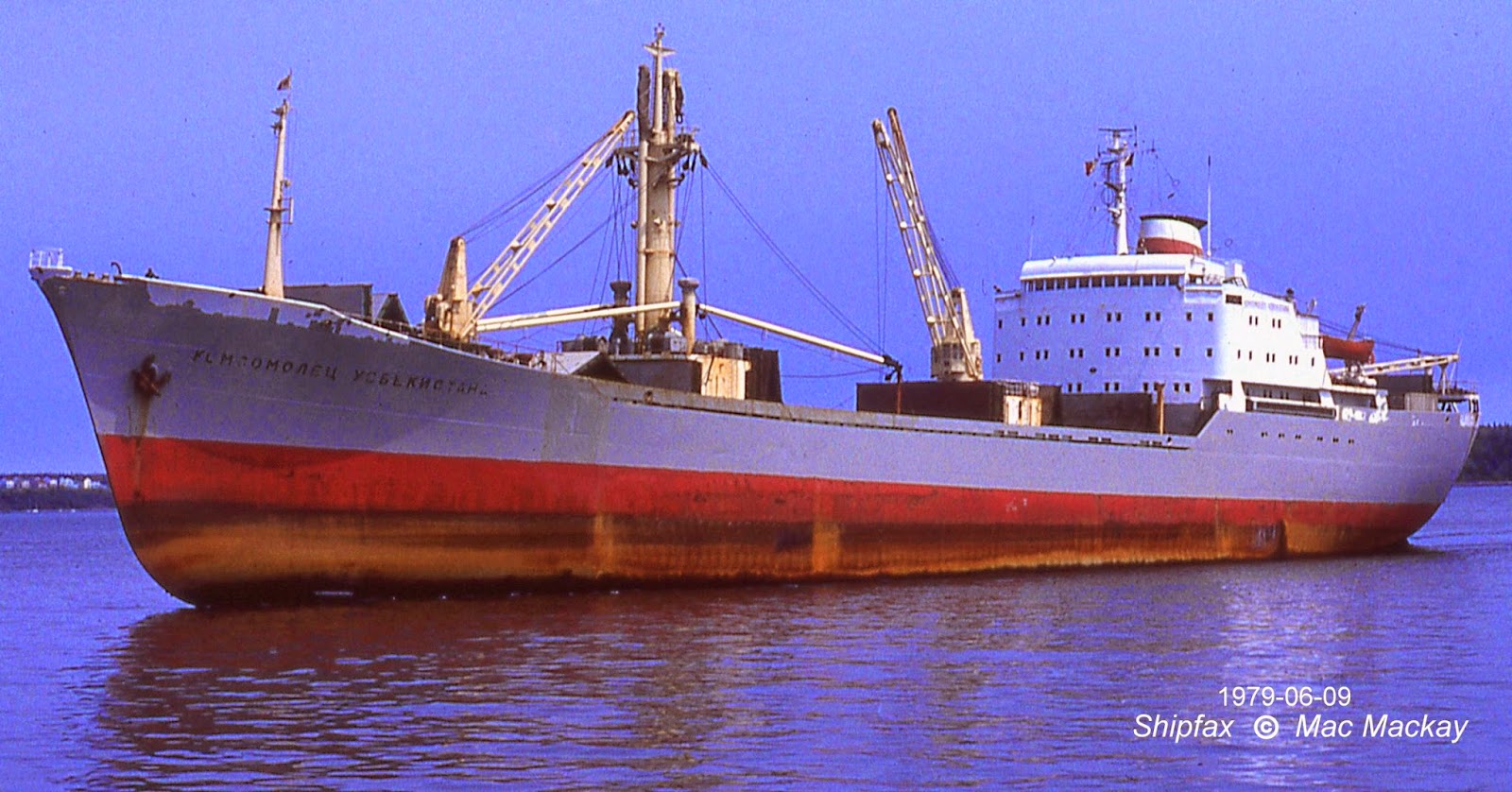 Komsomolets Uzbekistana displays a different tone of gray paint. The lighter tone of gray is still visible at the forecastle rail , where it was hard to reach. Colour consistency was rare in Soviet paint. Built 1965, stranded and damaged at Santander, Spain November 21, 1994, broken up Maliamo, Cantabria in January 1995.

By 1982, the same ship was painted black- usually the colour scheme of another USSR shipping company, Murmansk Shipping. Here it is working cargo at pier 21 using cranes and derricks. 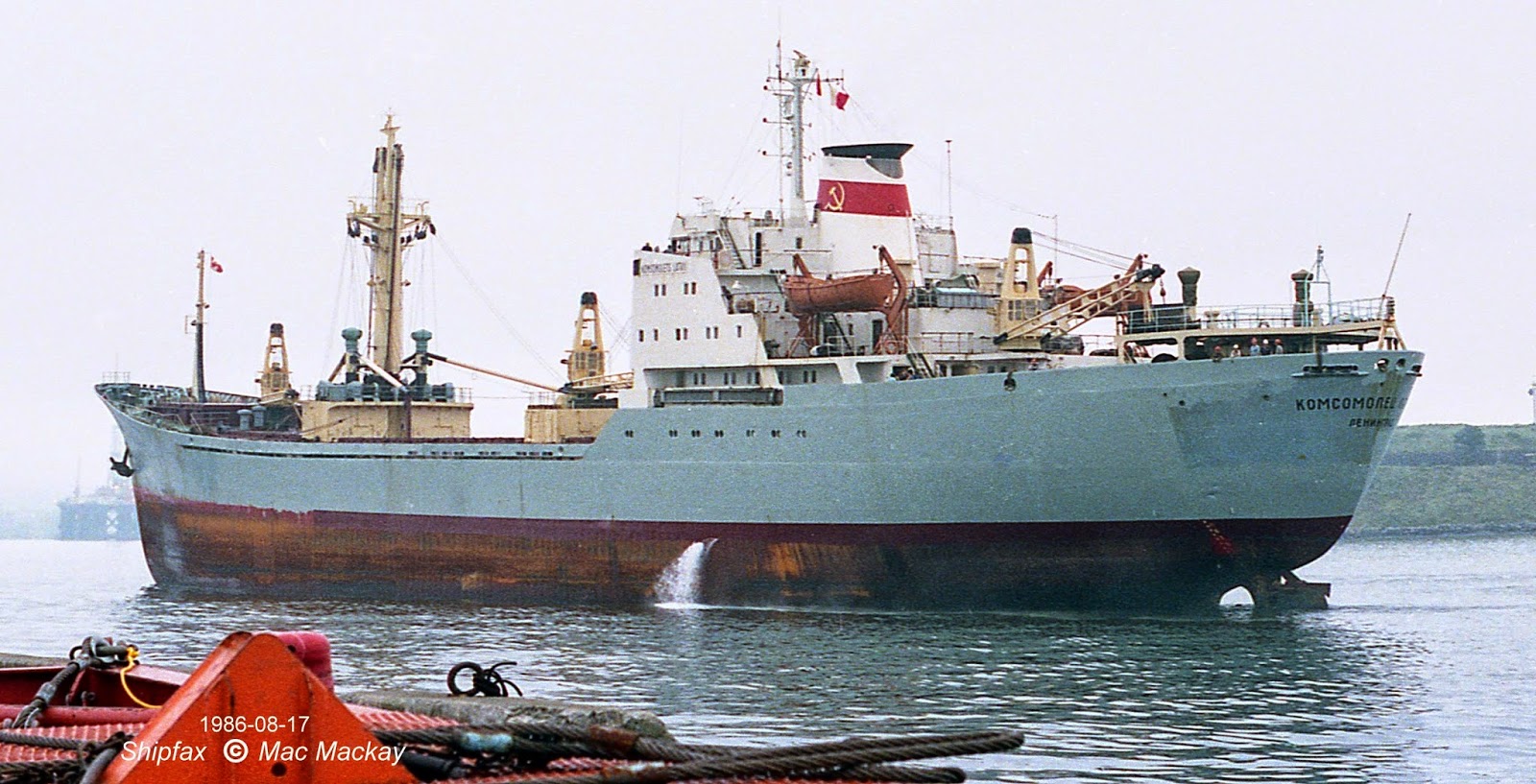 Komsomolets Latvii with a variation on the multi-tone paint job.
Built 1966, arrived Bombay October 19,1993 for breaking up.

Kommunarsk sails loaded to her summer marks** with some fresh paint. There was lots of time for painting when the ships were in Halifax for up to a month.[ See footnote]
Built 1965, renamed Kalisti (Maltese flag) in 1994 for delivery to breakers, arrived Alang January 28, 1995.

Komsomlets Khirgizii's winter call did not permit painting.
Komsomolets Kirgizii , built in 1966, arrived in Halifax February 25, 1987 and completed loading March 11. It then went to anchor and sailed March 12. On March 14 it experienced an engine breakdown in heavy weather, and took a severe list 200 miles off New Jersey. All 37 crew were lifted off by three USCG helicopters before the ship sank overnight. [The crew, not normally welcome in the USA in those days, was kept under watch in a Philadelphia motel until they were taken to the USSR embassy in Washington for repatriation.]
There have been questions about why the ship took a list, since was fully loaded, but it is possible that a hatch cover was breached by high seas or began to take on water for some other reason.
Once wet, the flour cargo would change character dramatically. 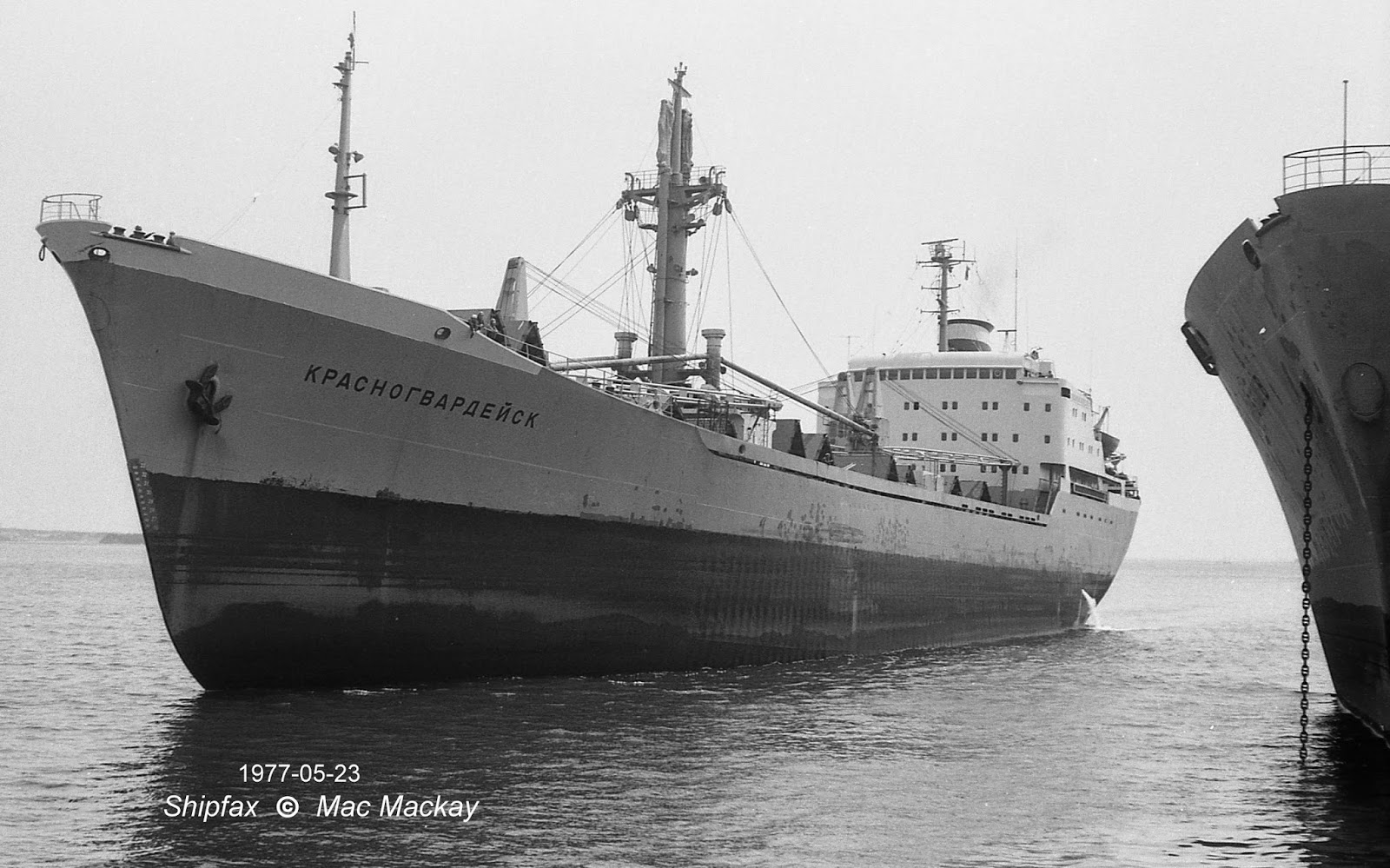 ** Note the USSR ships did not have a plimsoll mark amidships, nor draft markings associated with international loadline conventions. However they did leave more freeboard in winter than in summer.

Names
Komsomolets- the Communist Union of Youth, organized by Republic. The various wings from Latvia, Estonia, etc., were recognized by ship's name.
Kommunarsk, Krasnokamsk, Krasnogvardiesk (Red Guard City) etc.,  the names of cities, usually with communist overtones, some have been renamed since the collapse fall of the USSR, in some cases reverting to pre-communist names.

Ship signature of Krasnogvardeisk from 1977, at pier 21. 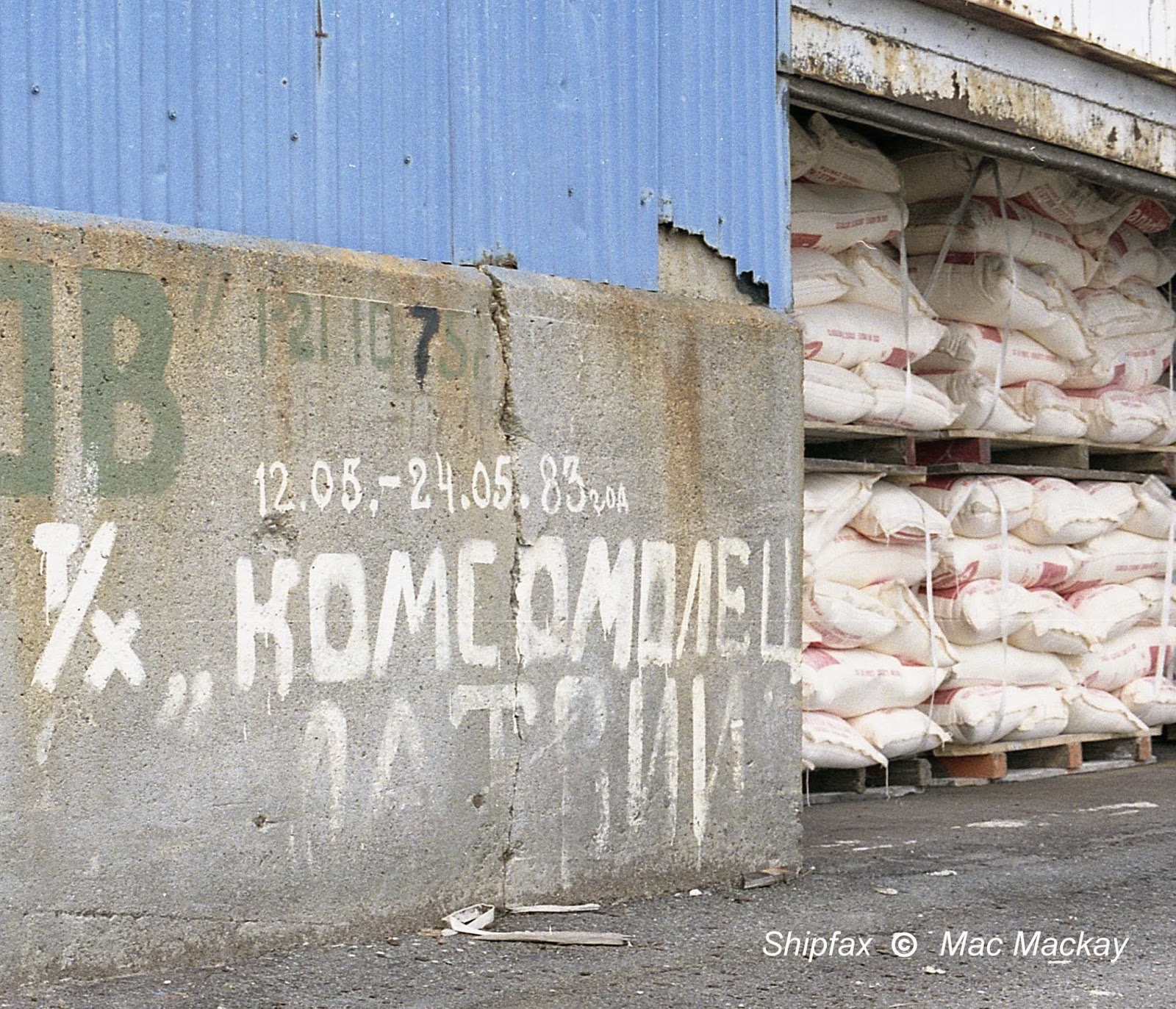 Dated signature of Komsomolets Latvii at pier 21, and some bagged and palletized flour.

The large collection of ships signatures all along the shed walls from pier 20 to 23 have long since been obliterated. I documented them in 1994.