Saturday Round Up and spring may be here

It was a busy day in the south end of the port at least, with all berths filled (sometimes twice) at Halterm.
Zim Alabama arrived at pier 42 early and sailed at noon time, with its place taken immediately by fleet mate Zim Virginia. 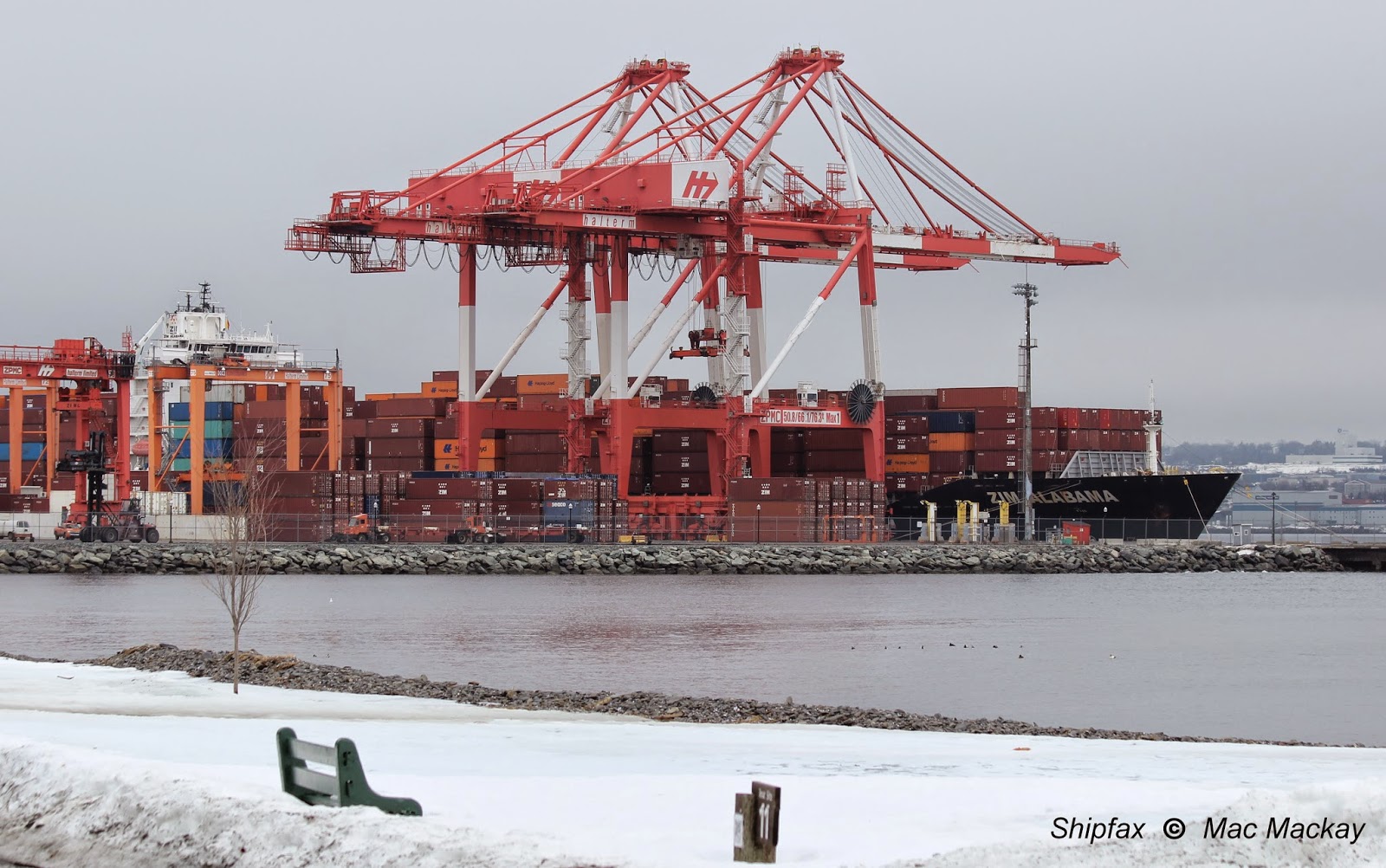 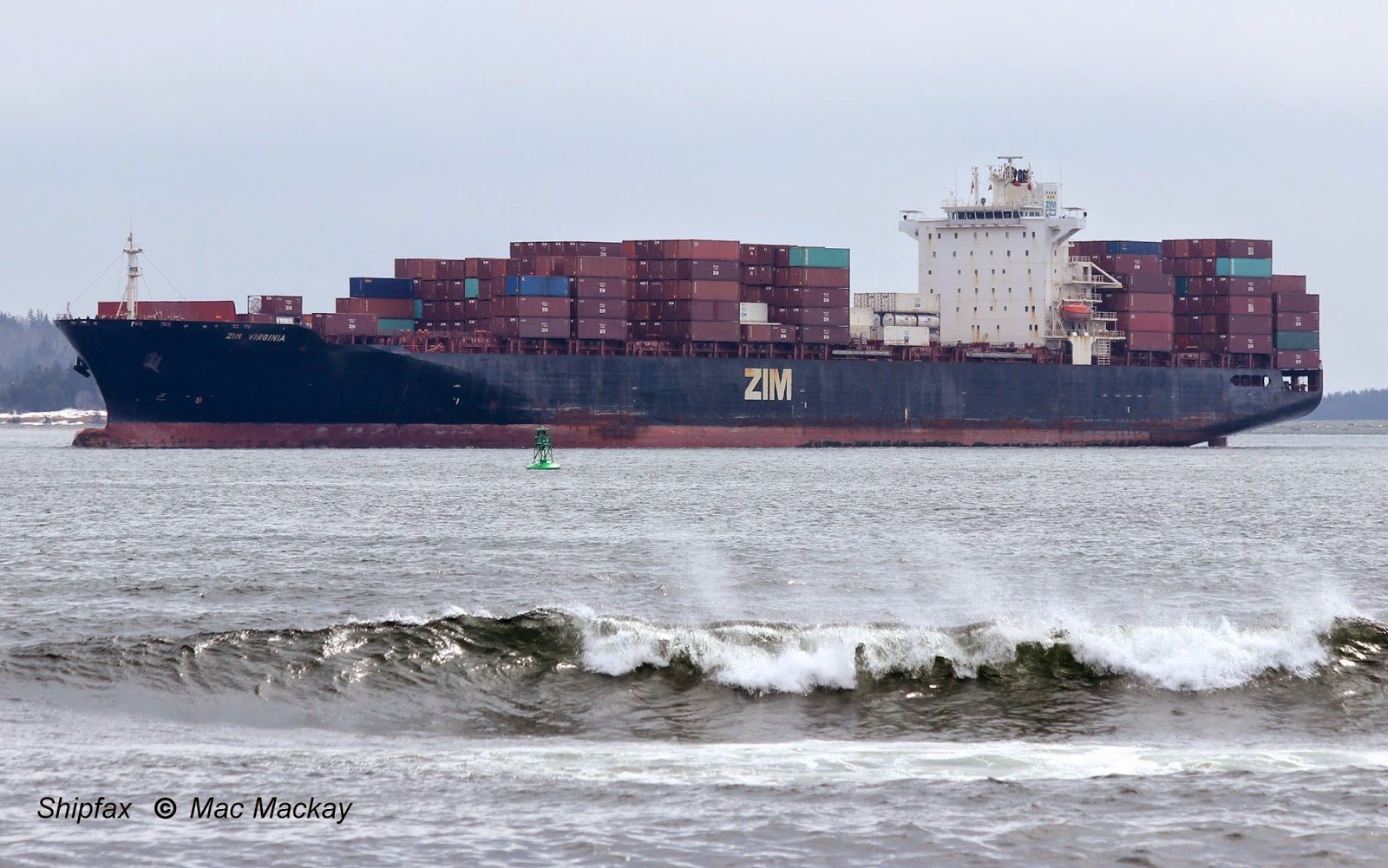 Zim Virginia works its way in. 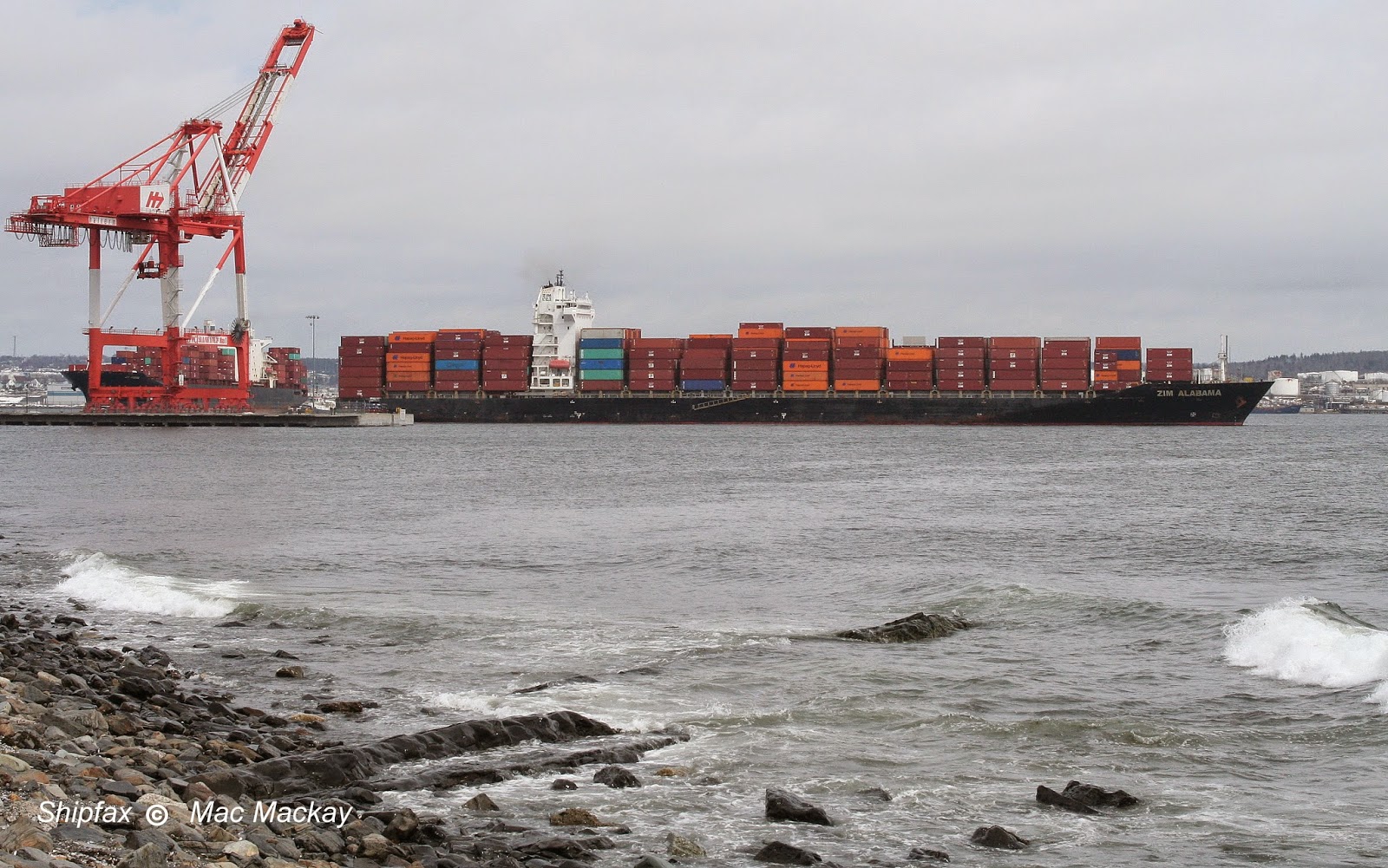 As Zim Alabama clears the berth, ZimVirginia is already swinging round to take its place. 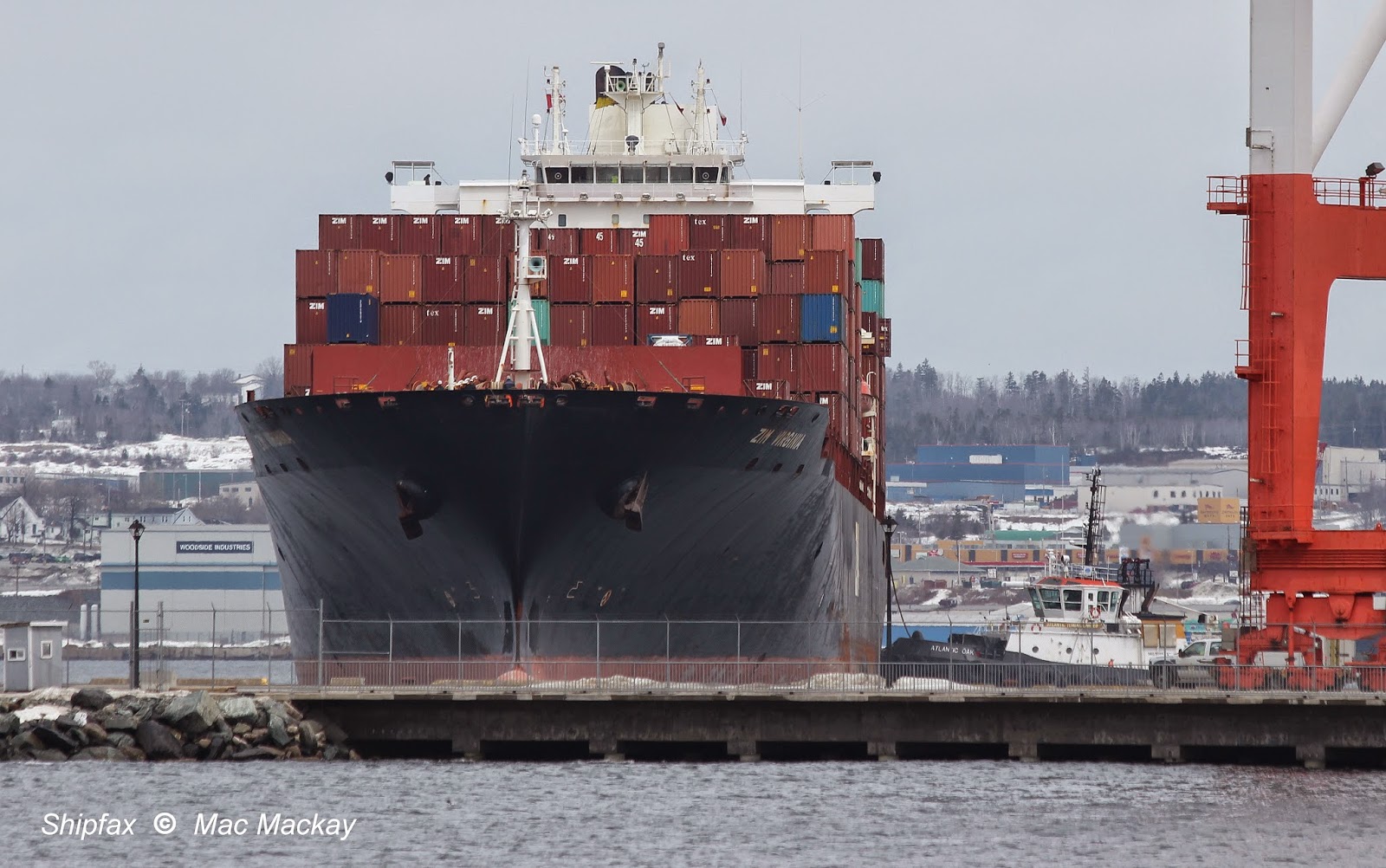 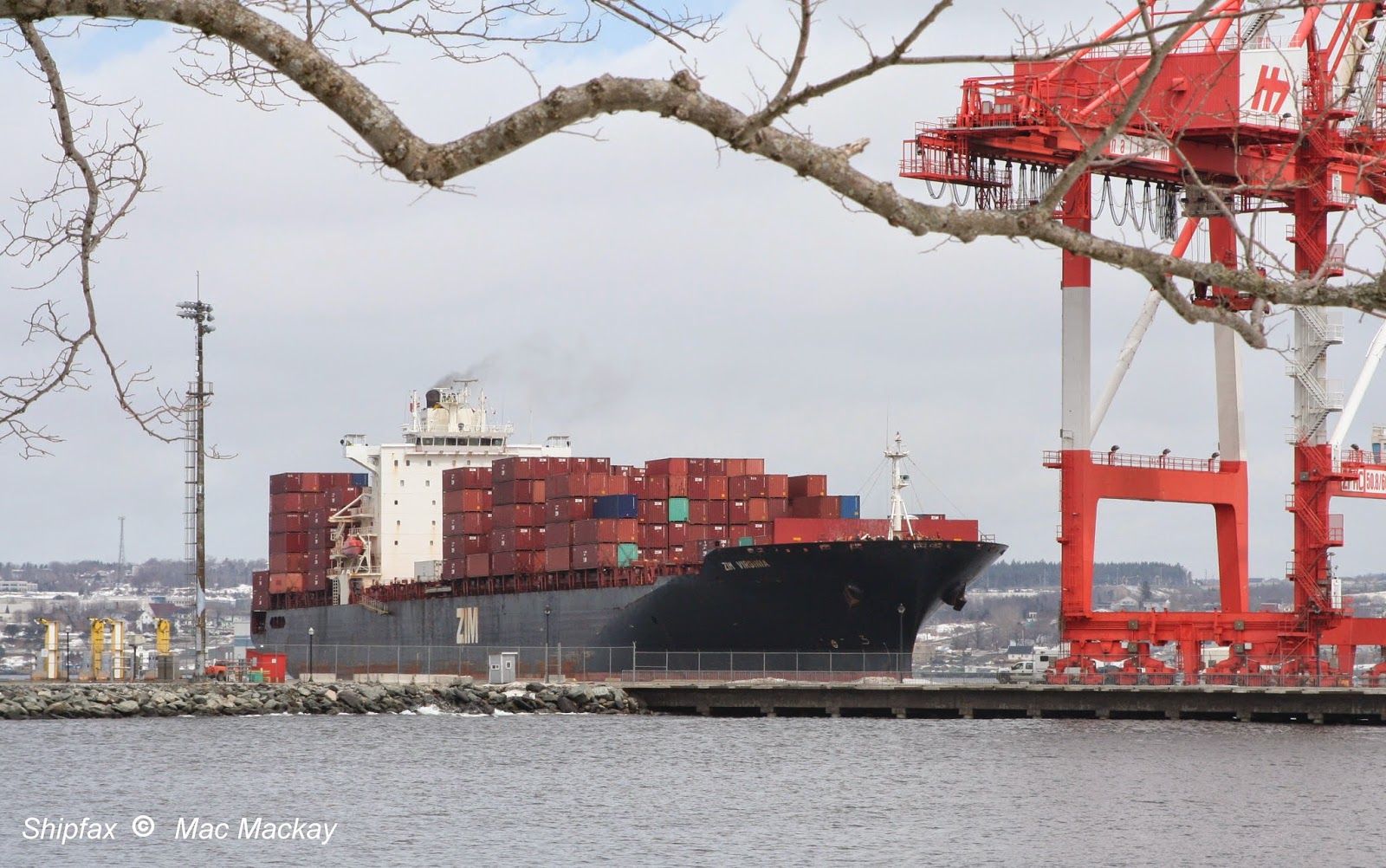 Within minutes it is alongside.

Zim Alabama is chartered to Zim from Marown Nav Ltd and managed by Rickmers Ship Management (Singapore) Ltd under the Marshall Islands flag. Built by Jiangsu in Jiangyin, China, the ship measures 40,542 grt, 50,158 dwt and carries 4256 TEU.
Zim Virginia is owned by Ymir International Ltd a subsidiary of Zim and flies the flag of Israel. It was built in 2002 by Hyundai, Ulsan and measures 53,453 grt, 66, 686 dwt and carries 4839 TEU. 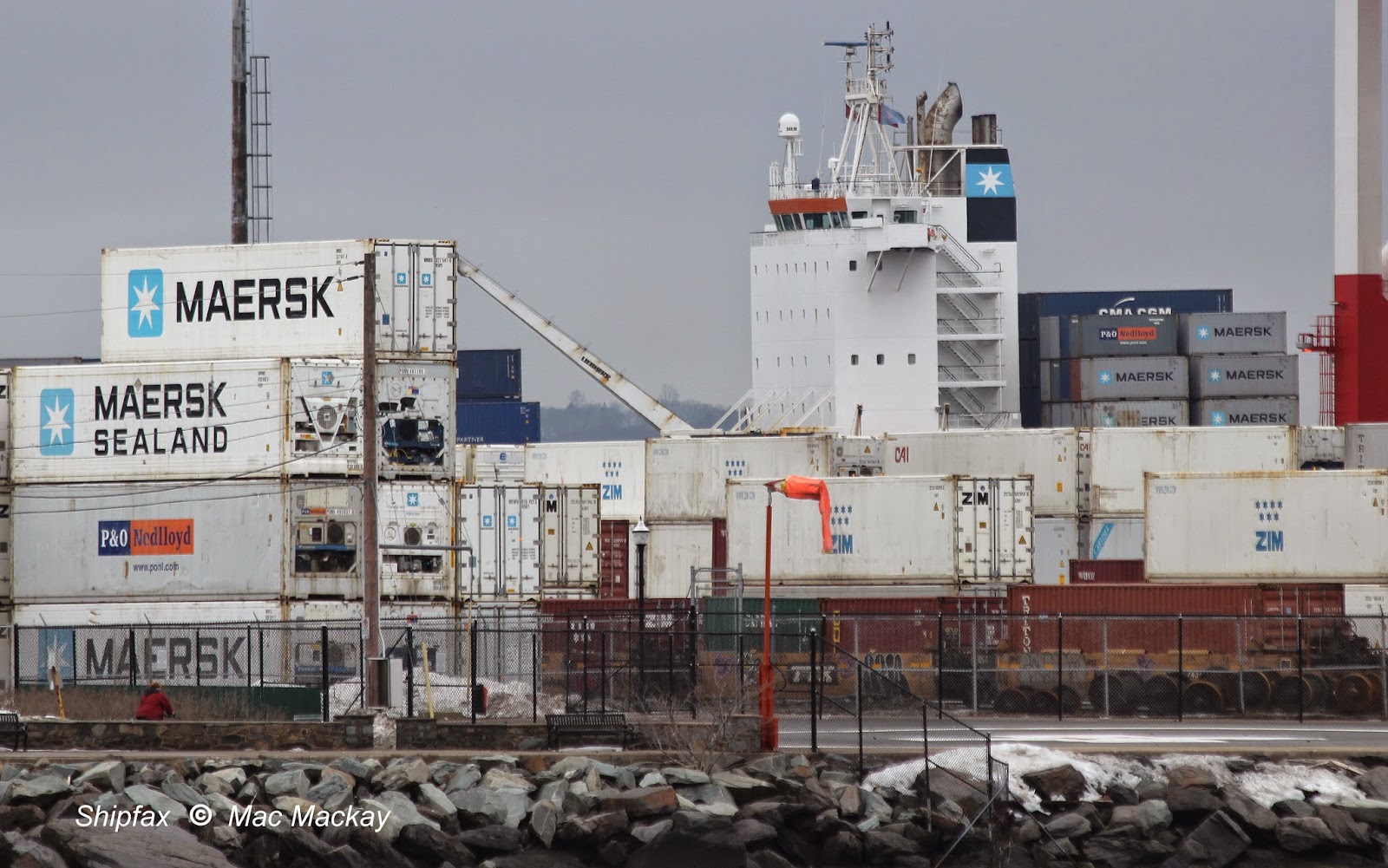 Meanwhile at pier 36, yesterday's occupant Fusion, moved out to anchor for the night and sailed this morning, freeing up the berth for Maersk Palermo. The ship came in bow first, then was heavily ballasted down by the bow, probably to make prop repairs. The ship arrived from Montreal, and likely tangled with more than a little ice en route. 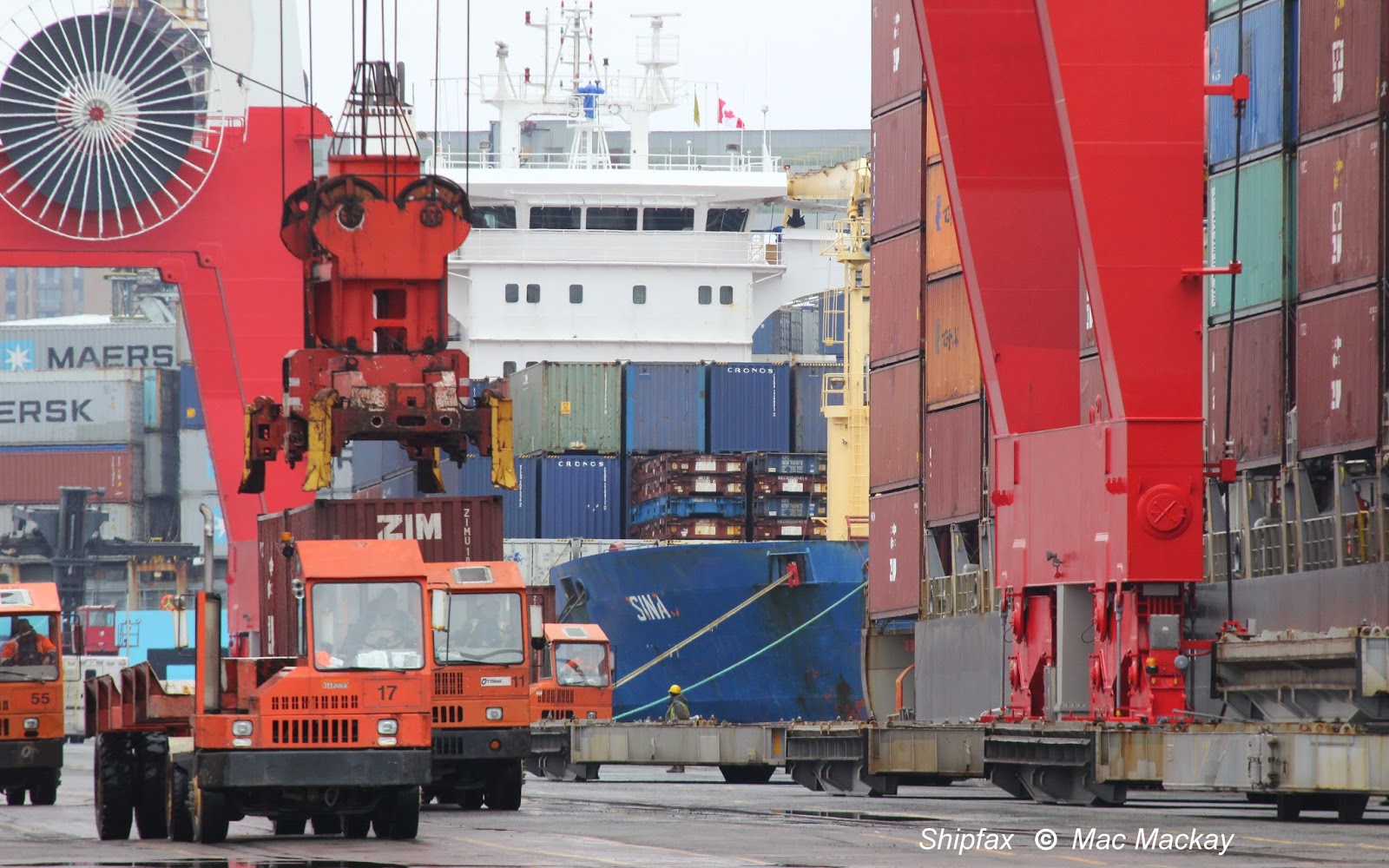 Also squeezing in at pier 41 was the newcomer for Mefli Lines, Sina. Built in 2004 by Qinshan, Wuhan, the 4462 grt, 5608 dwt ship carries 502 TEU (including 84 reefers) and has two deck cranes. It is small for Melfi Lines by today's measure. It has changed name eight time since it was built, indicating a likely short term charter. 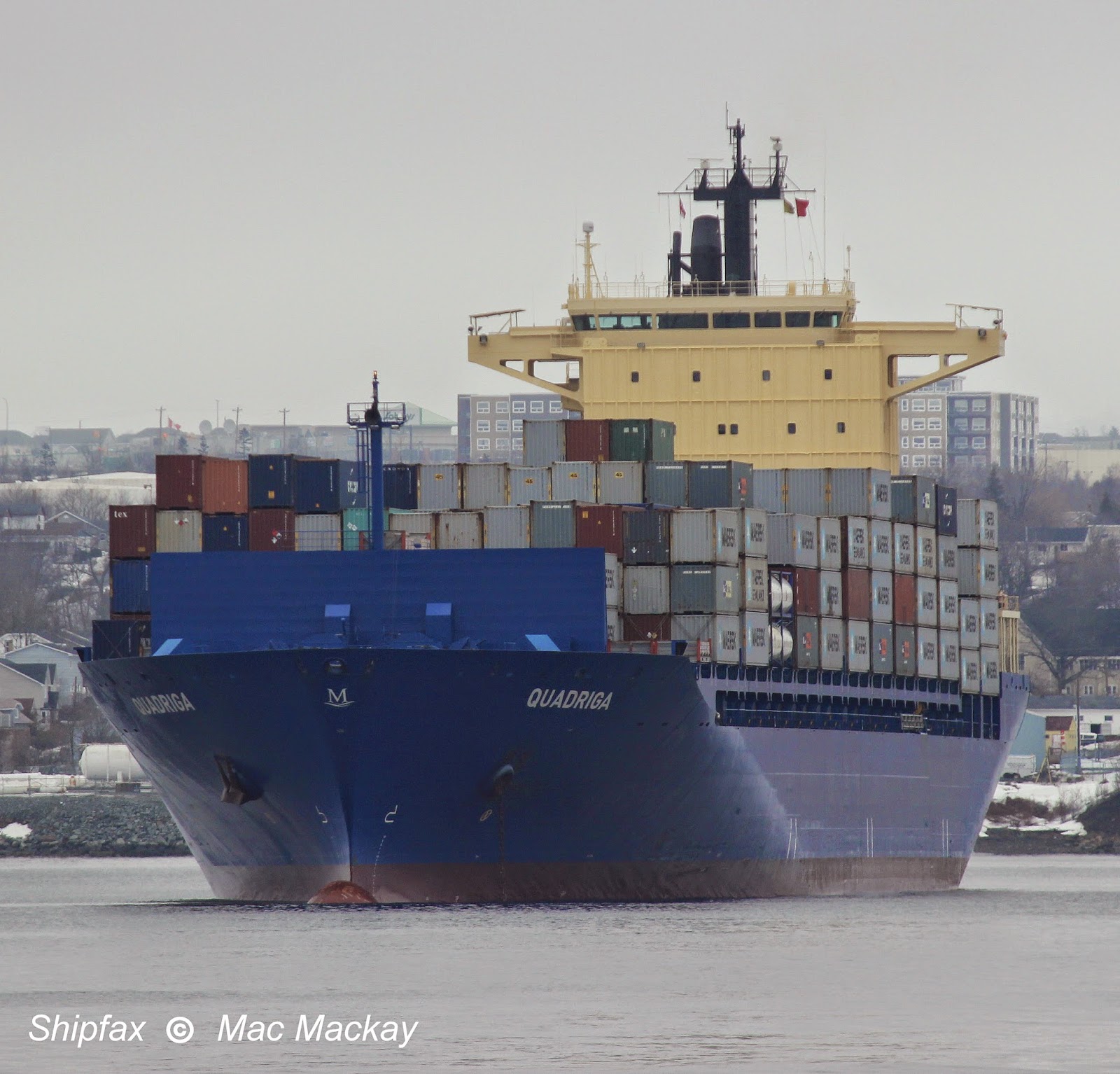 Meanwhile in anchorage number one, the Maersk Line container ship Quadriga stopped in for its Canadian Food Inspection Agency checkup for Asian gypsy moth larva. This is surely a sign of spring when there is a concern about moths hatching. As far as I can tell this is the first ship to arrive for such an inspection this year, but there will be many more to come. Ships heading into Quebec and the Great Lakes region will all be subject to these inspections if they do not have recent certificates. 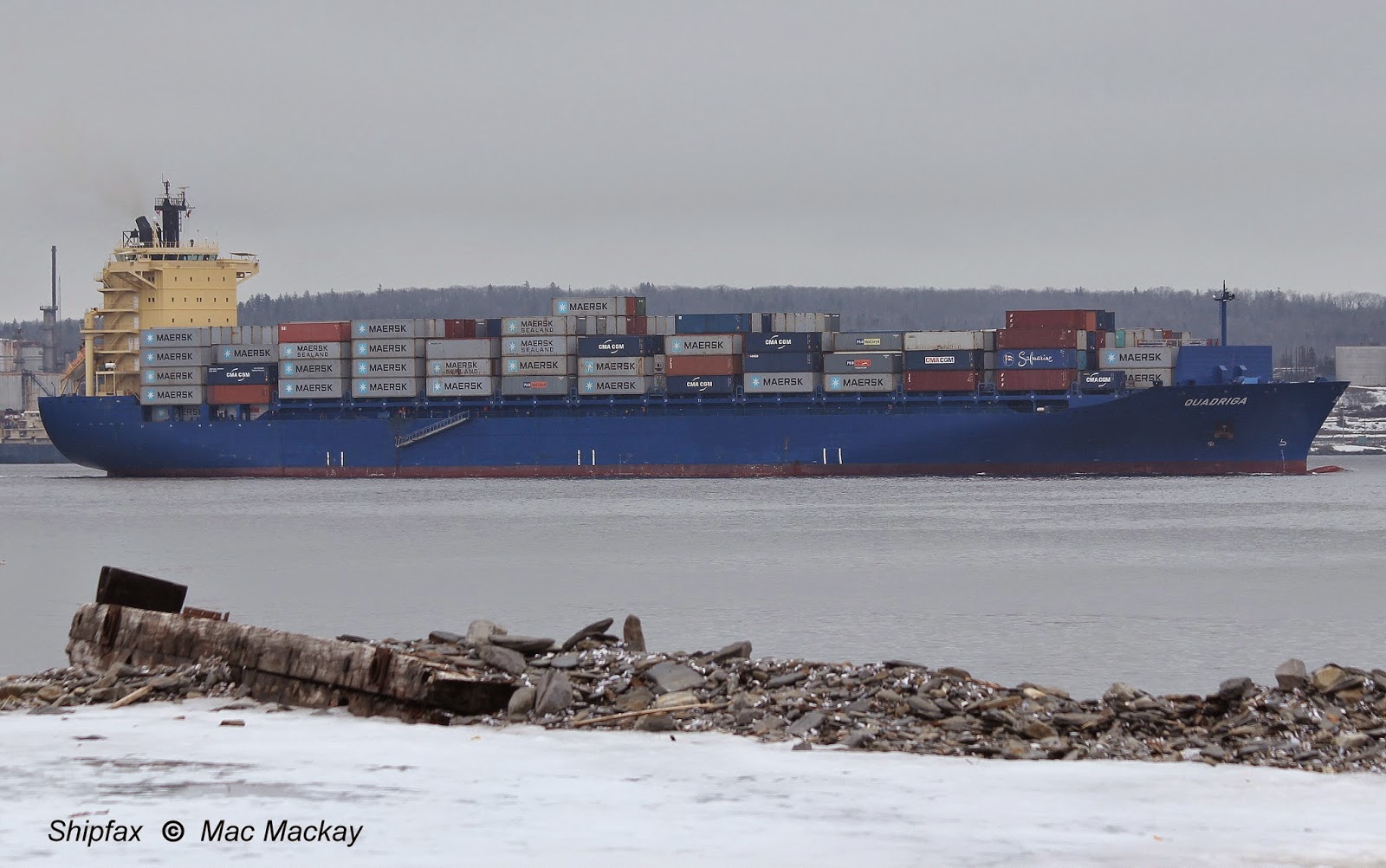 Quadriga gave Montreal as its destination, so the ship has apparently been assigned to Maersk's transatlantic service
Rare among container ships, it was built at Thyssen Nordseewerke in Emden in 2008 for Maritime Reederei, a 14 ship fleet based in Elsfleth. Measuring 36,087 grt, 42,566 dwt it is a substantial ship with a TEU rating of 3426 (including 500 reefers). However on close inspection the TEU rating lowers to 2410 if all boxes are loaded to 14 tonnes each, with centre of gravity at 45% of container height.
In 2013 it came off a five year charter as CSAV Romeral. 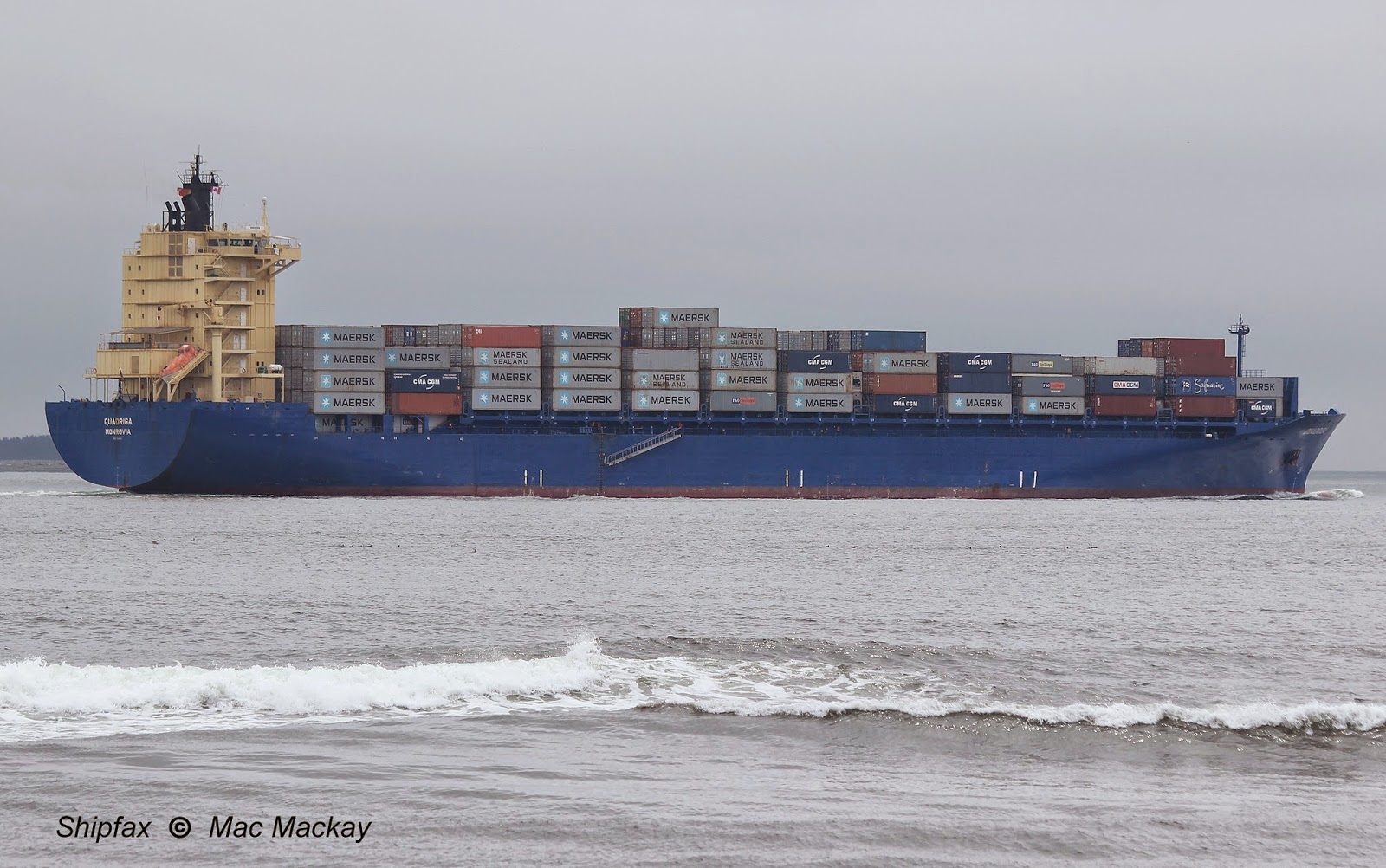 Also in port, but idle today was the cargo ship Capri 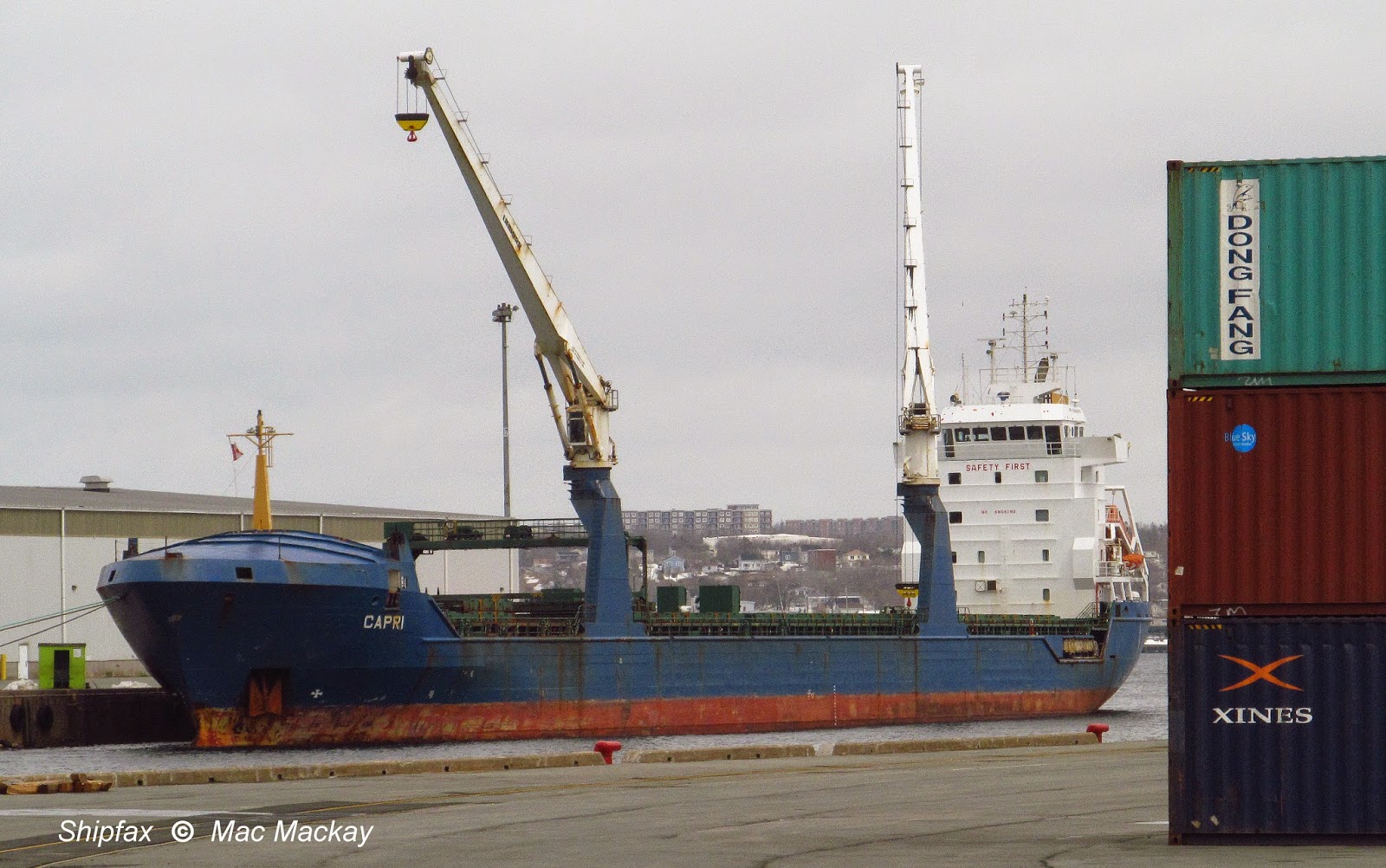