The Glorious History of Shipfax - Part 1

Halifax Shipping News (which claims to be a competitor) recently revealed that Shipfax was once a hard copy newsletter. Since I was planning to do this later in the year anyway, but have now been scooped....

Herewith: The Glorious History of Shipfax

Shipfax traces its roots to “The Halifax Shipping Observer”, the putative Newsletter of the Halifax Branch of the World Ship Society. Its first issue (Vol.1. No.1) appeared in October 1977. It consisted of one double sided page on legal size paper and was co-authored by Mac Mackay and Larry Elliston.
Since Vol.1. No.1 may have been the only issue ever printed (one original copy survives) it can only be considered an inspiration for what followed.

The first real Shipfax appeared in February 1986 and covered activities in the Port of Halifax in the previous month of January, on one double sided letter sized sheet, but was closely packed with information. It was produced by a typewriter [see Wikipeida if you need explanation of what a typewriter was]. Three different typewriters took turns on the job. The first was a cheapo portable, next was a lovely looking Olivetti, then there was an IBM Selectric.
Shipfax meanwhile expanded to be four to six pages (three sheets).

Shipfax entered the computer age in March 1987 and was produced in Word Perfect by a dot matrix printer until the end of 1991.

In 1992 it became much more presentable, shifting to a two column format printed on a laser printer, and included some illustrations, and it was pasted up before photocopying. By this time it had adopted a standard eight page format (four sheets) and was mailed or faxed to recipients, still at at the letter rate.

It was also during this era when Shipfax listed every arrival and departure in the port during the month of issue. This meant that the publication date was anywhere up to two weeks following the end of the month, since I had to go into the Port Authority and check and verify. It also began a systematic look back “From the Files” covering events that occurred ten, twenty or thirty years before.

It took a solid day a and a half to two days to complete and format it ready for printing. Then there was the folding, enveloping, stamping and licking to do.Circulation reached into the sixties, mostly paid, which covered postage and photocopy costs.

By about 2000 the photos were added electronically. Digital photography started in 2005 and a scanner was added to convert negatives to electronic files. The format remained largely unchanged until 2007, although it was sent electronically as a pdf to a commercial printer.

There were a few hiatuses when other pressures prevented regular mailings, but there is a pretty good run from 1986 to the end of 2007. The year 2008 saw Shipfax peter out and the hard copy  version died a quiet death. A smaller one page Tugfax showed up irregularly, and there was the odd one page Shipfax Bulletin from time to time.

The Shipfax blog - of a very different format- with no attempt to cover every arrival and departure came into being in 2007. Regrettably the Google archive doesn’t preserve the earliest and first posting, but such is modern life - here today - gone tomorrow.

The hard copy version had more longevity, but less currency, since so called news was up to month old when it was printed. It was also a lot of work! Since it was not entered into a datadase, there was no searchable function.

The Shipfax blog is a lot easier, takes less time and is quite current - often issued within minutes of some event in the harbour. It also allows for occasional historical overviews and longer essays that were not possible within the eight sided version. (The four folded sheets of paper was the maximum that could be mailed at the letter rate of the day).

All in all it has been a useful exercise and discipline and I hope it has provided a record that will not be found elsewhere.

February 2016 is the target date for the last Shipfax blog posting in its current format. Since all good things must come to an end, I am looking at ways of ending Shipfax on a positive note. Any suggestions?

Here is a facsimile of Halifax Harbour Observer Vol. I No.1: 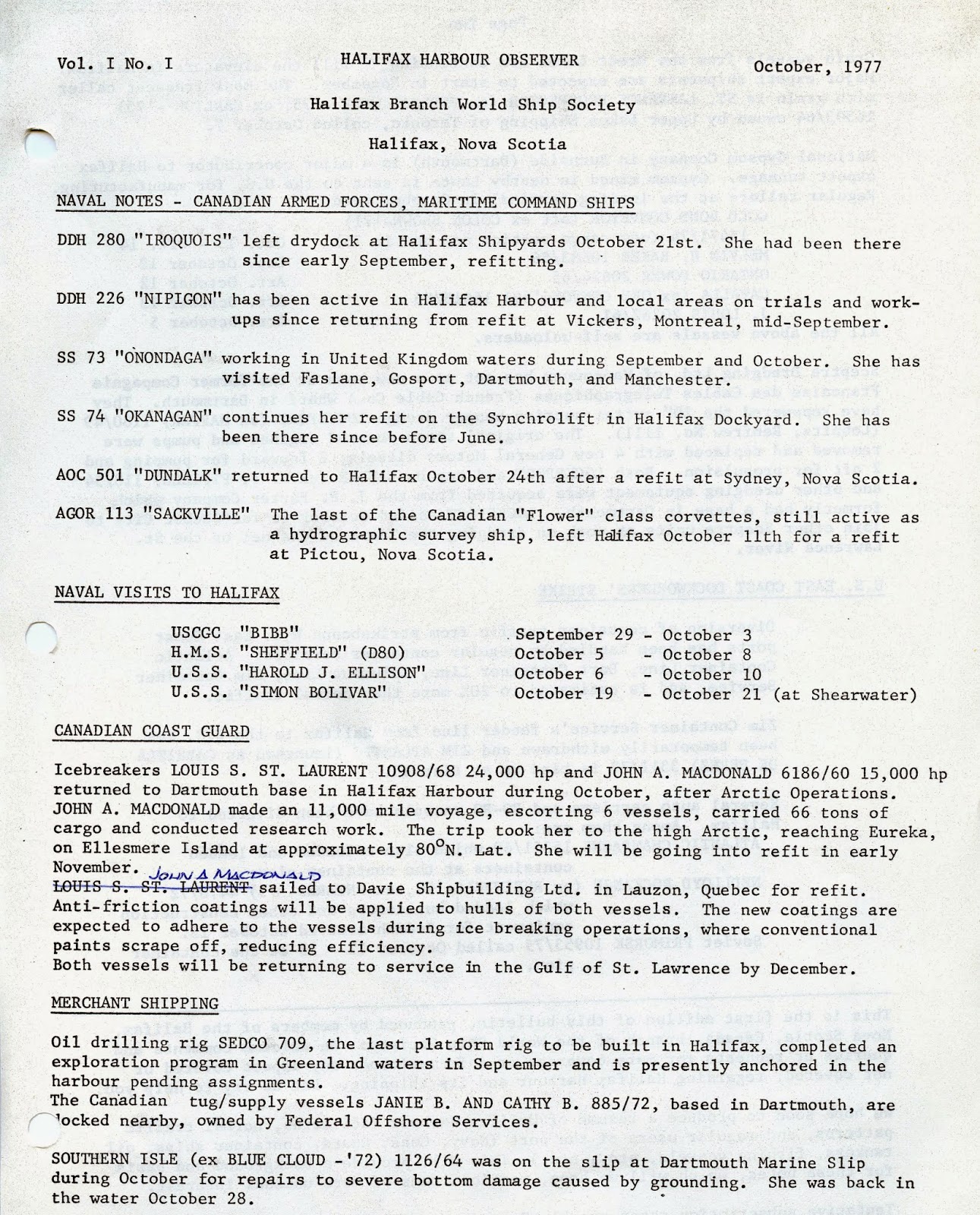 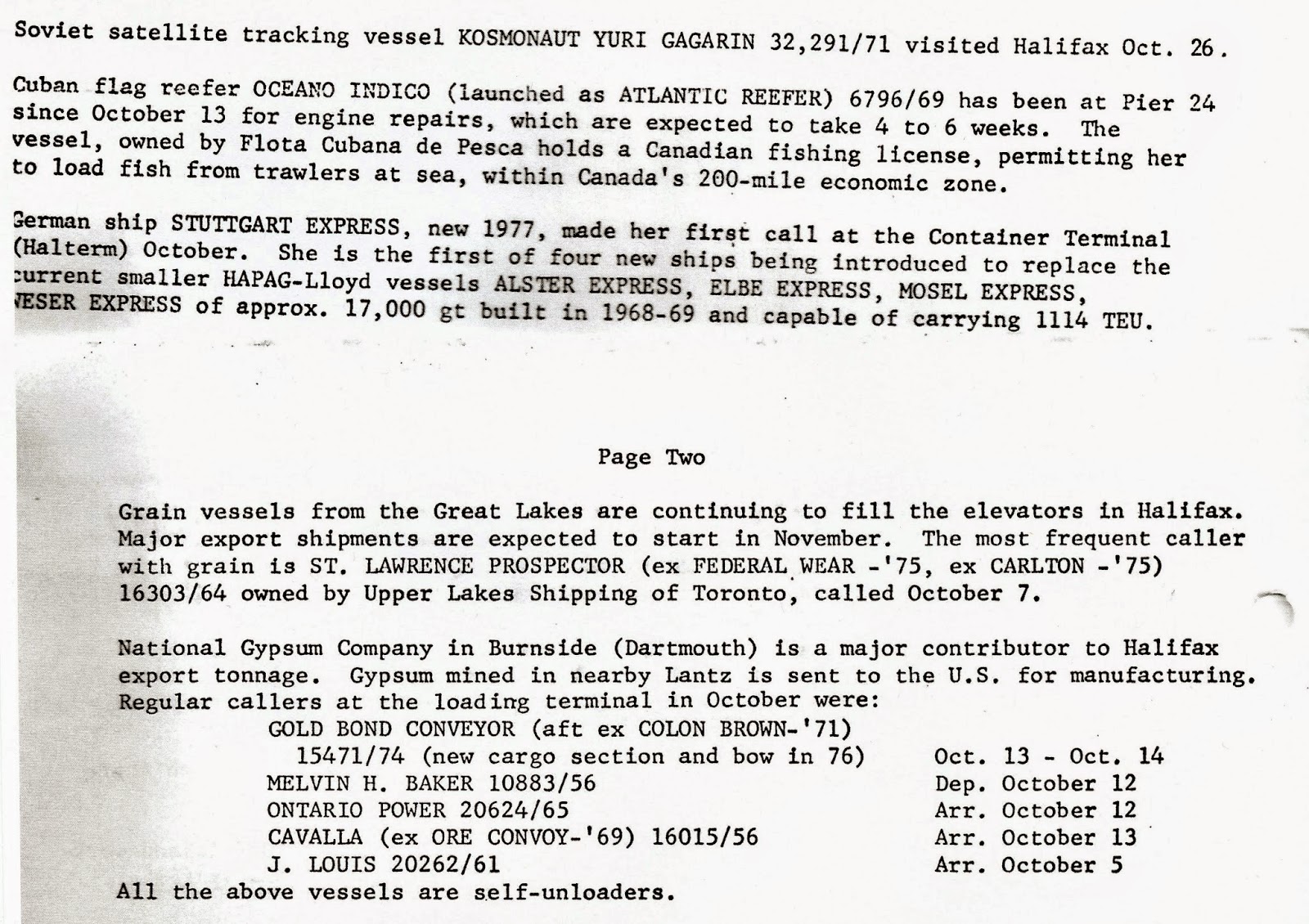 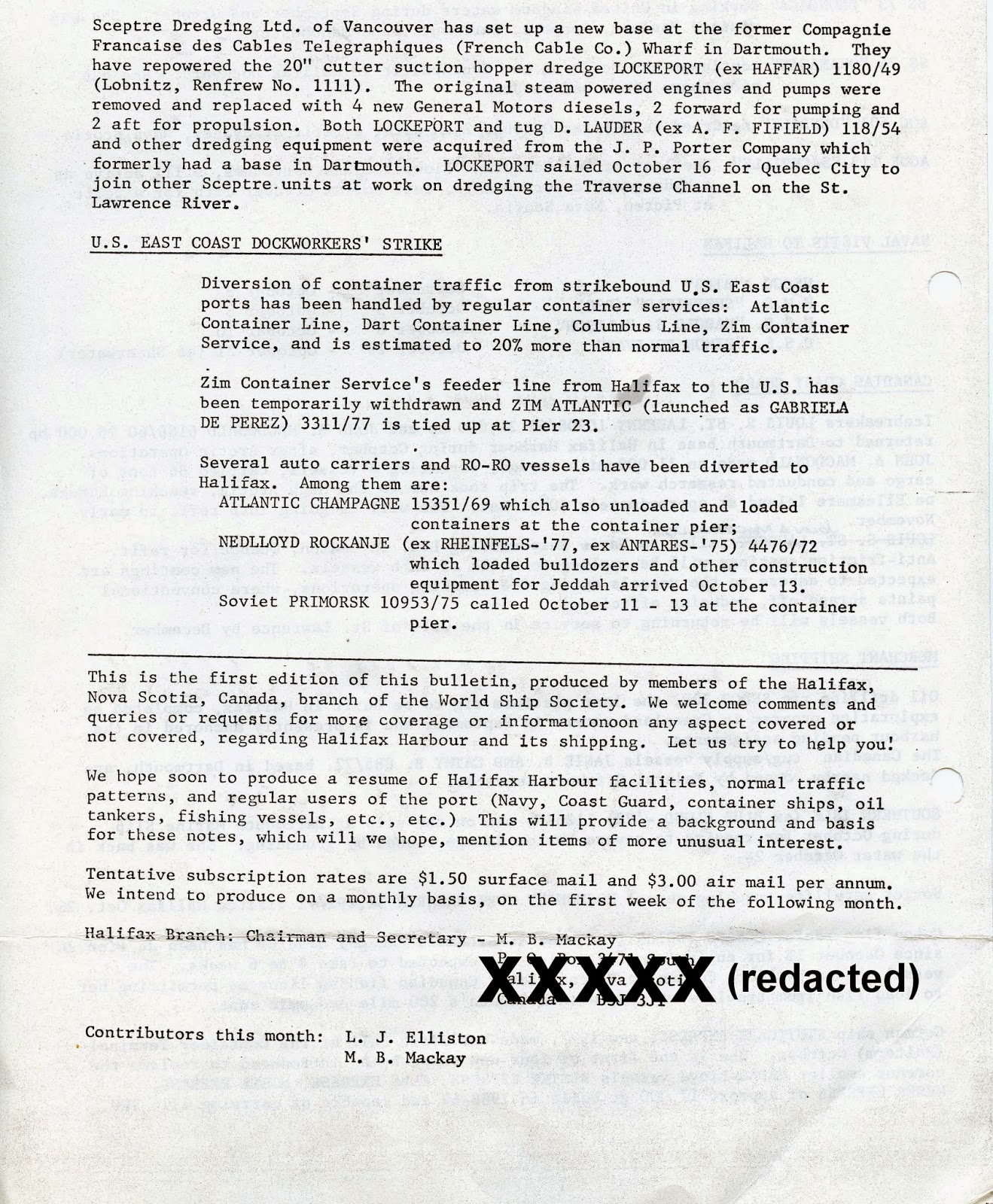