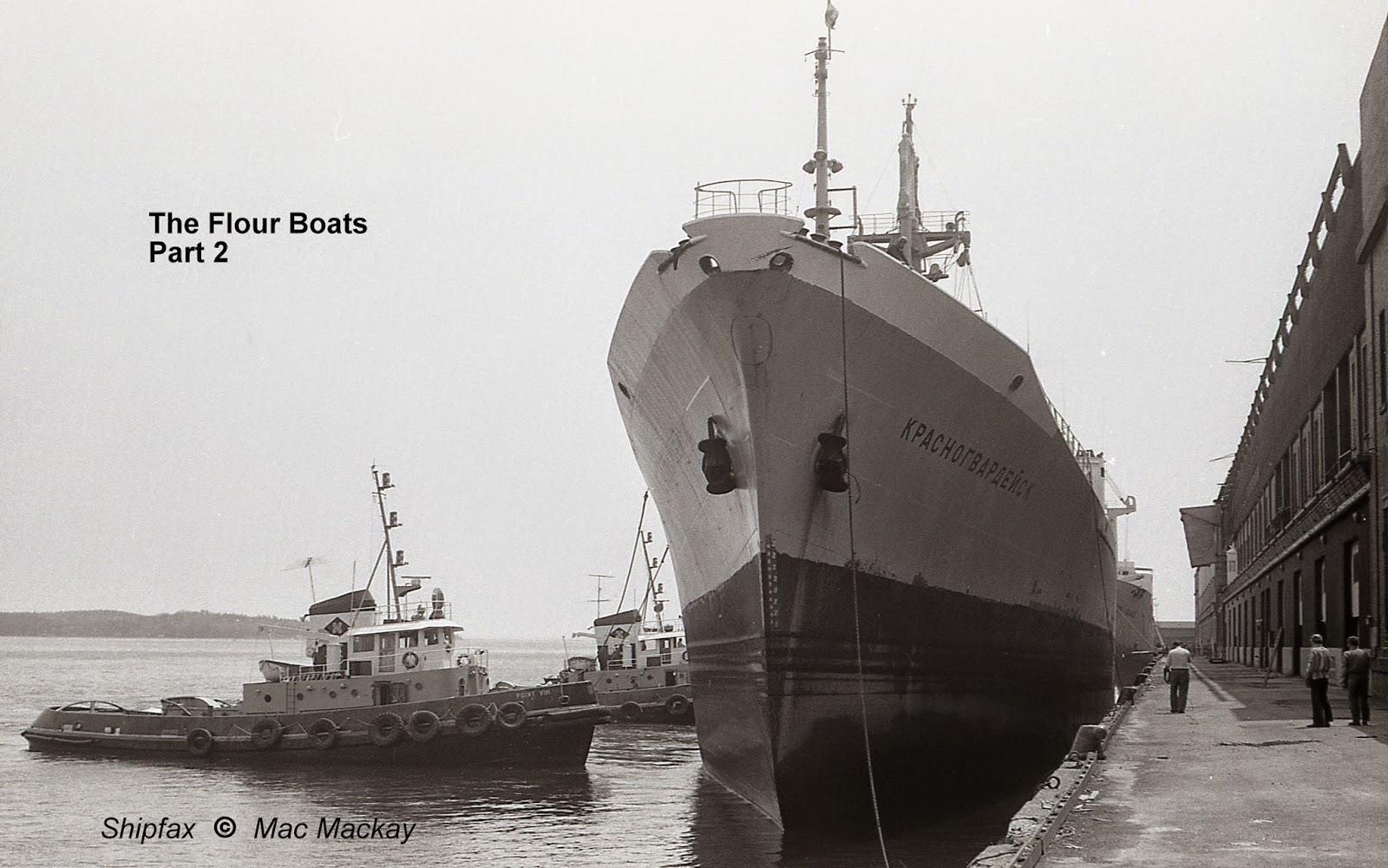 After the Klin class featured in Part 1, there were representatives of several other classes of USSR cargo ships loading bagged flour in Halifax on a regular basis until 1988. Contracts to ship flour to Cuba were awarded every six months, and Halifax consistently won the contracts, in part due to the presence of a flour mill right on the Halifax waterfront. However some flour was also brought in by rail, and box cars could be unloaded directly into the sheds at pier 20-22.


The Irkutsk class (also known as type 17) carried all cranes, with three pairs of 5 tonne units forward and a single unit aft, and they were built by Warnowerft, Warnemunde (then in communist East Germany). 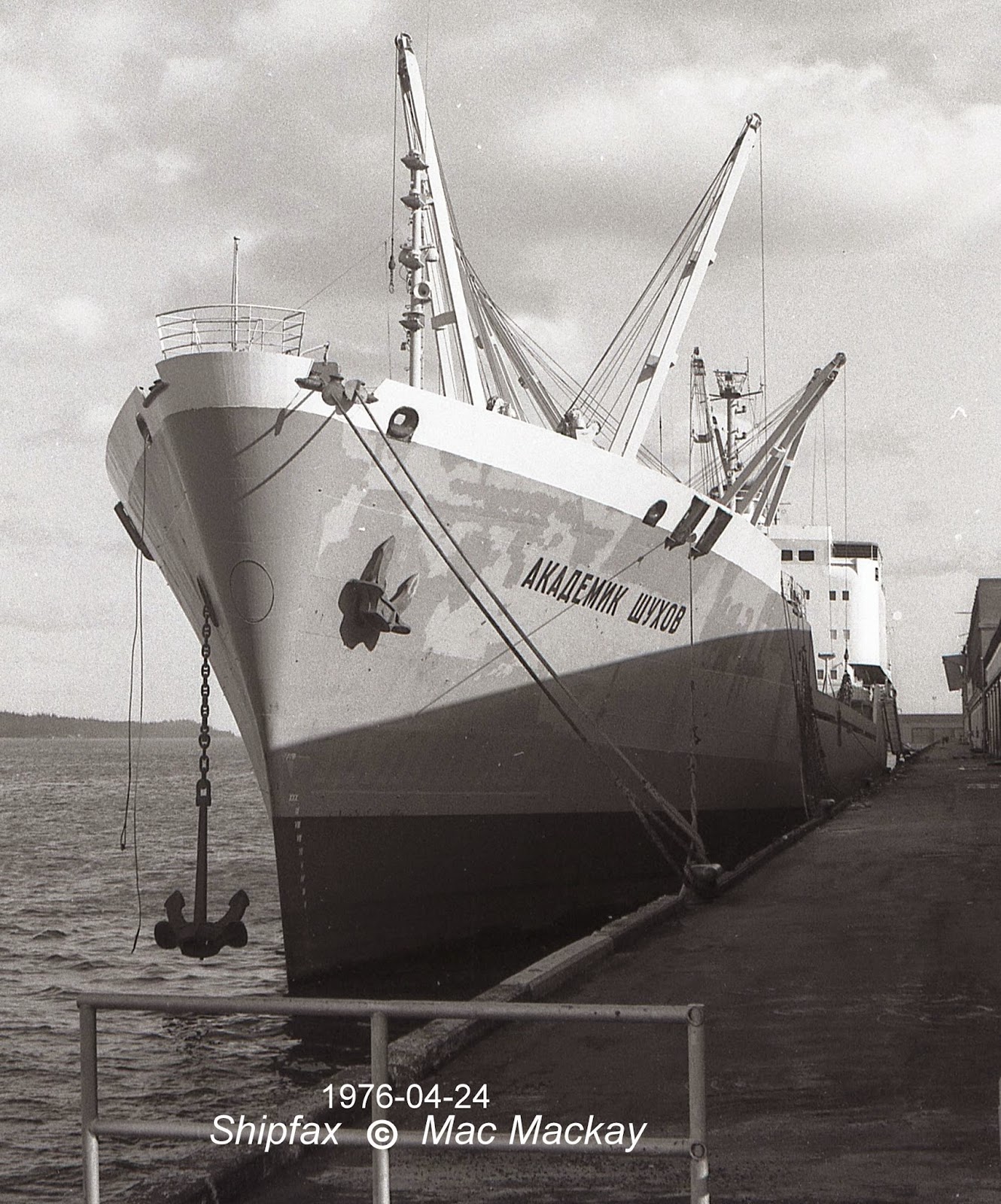 The nine ship Kasimov class  came from Crichton-Vulcan in Turku, Finland. They had four 5 tonne cranes, one 60 tonne and one 40 tonne derrick. The derricks were mounted on a distinctive looking mast. between hatches five and six, and they carried no light capacity booms.

Kovrov built in 1962 and was broken up in Chittagong July 1, 1987. Note the white funnel cap and black mast - not the standard colours.

Karachaevo-Cherkesiya  also dated from 1962 and was broken up in Naantali, Finland in August 1987.

The Novgorod class of eight ships were built by Wartsila, Turku, Finland and had only cranes for cargo handling. Of the five 5 ton units, two were paired. 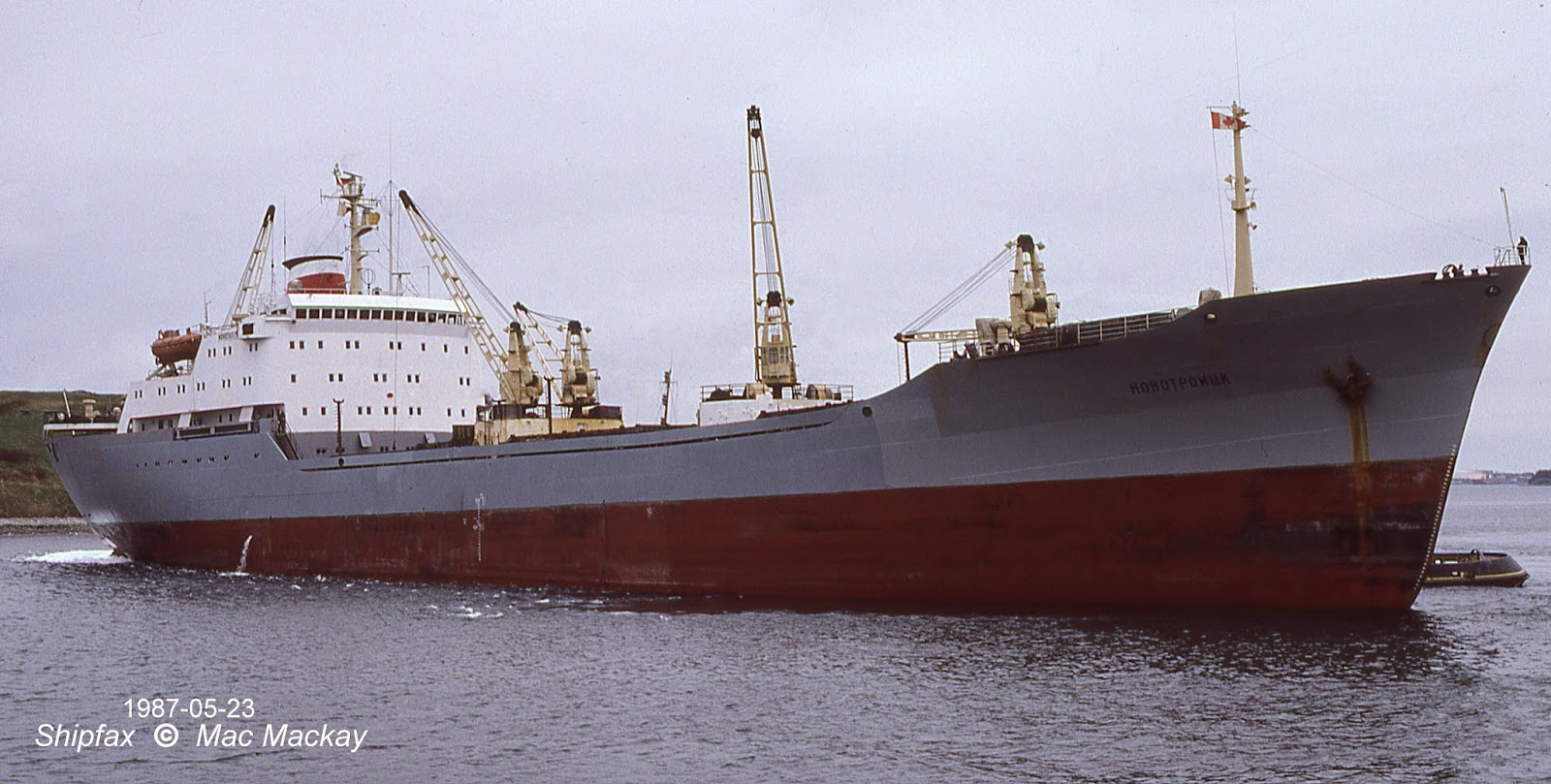 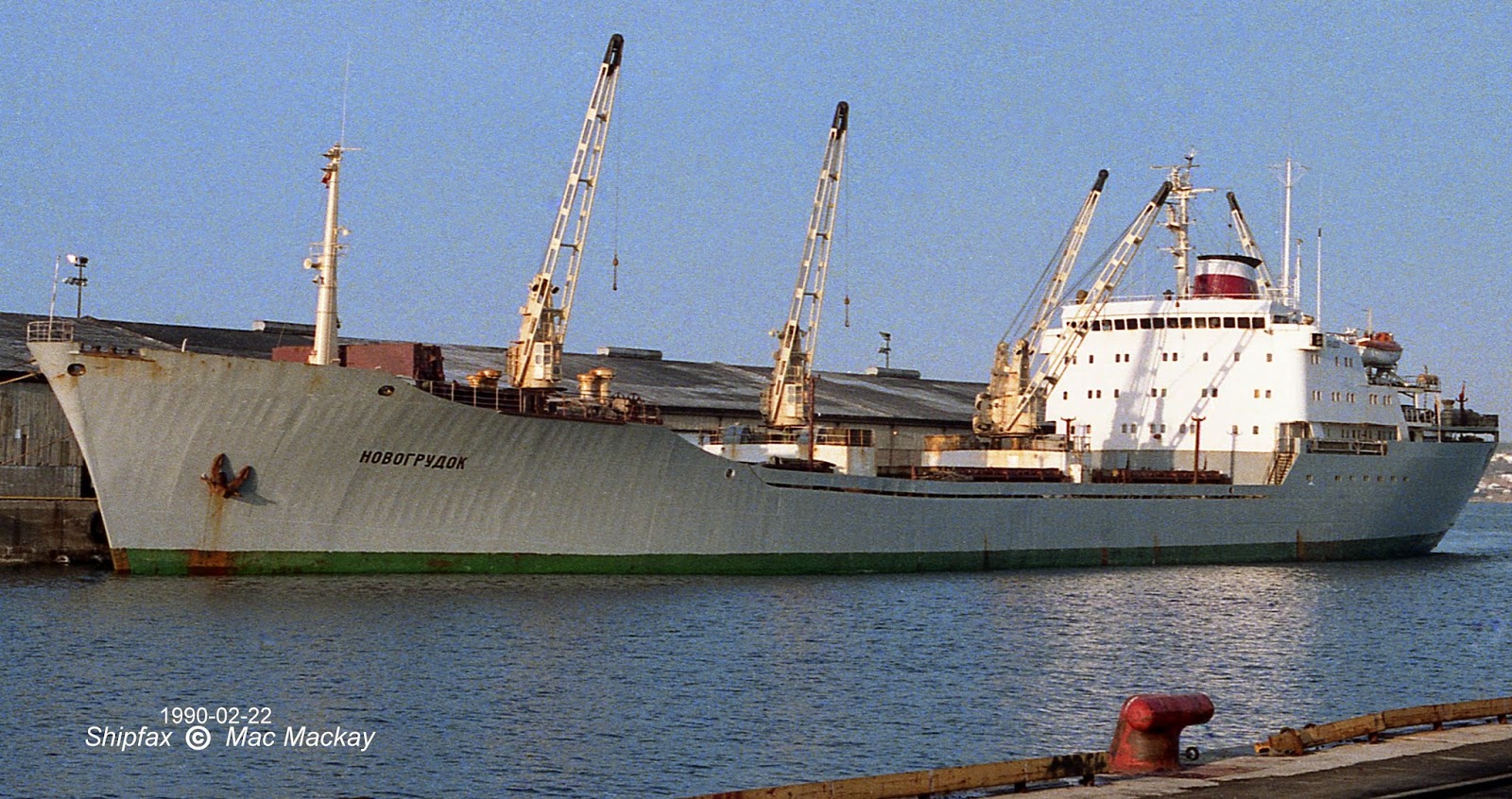 The Vyborg class of 18 ships, also called the Type VI, came from Warnowerft, Warnemunde, East Germany. They carried only derricks, with twelve 5 ton and one 60 tonne, mounted on bipod masts forward and a goal post aft. 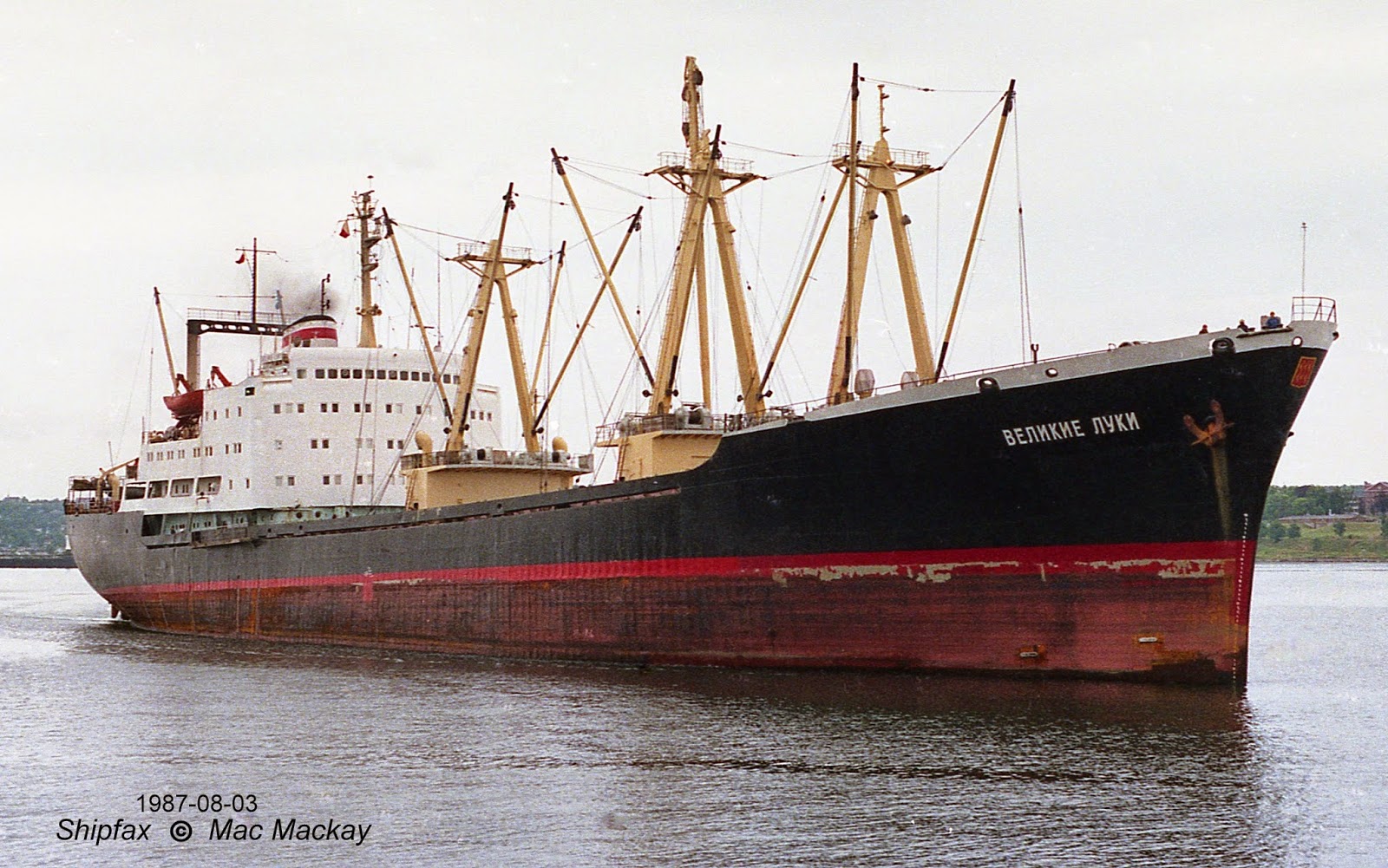 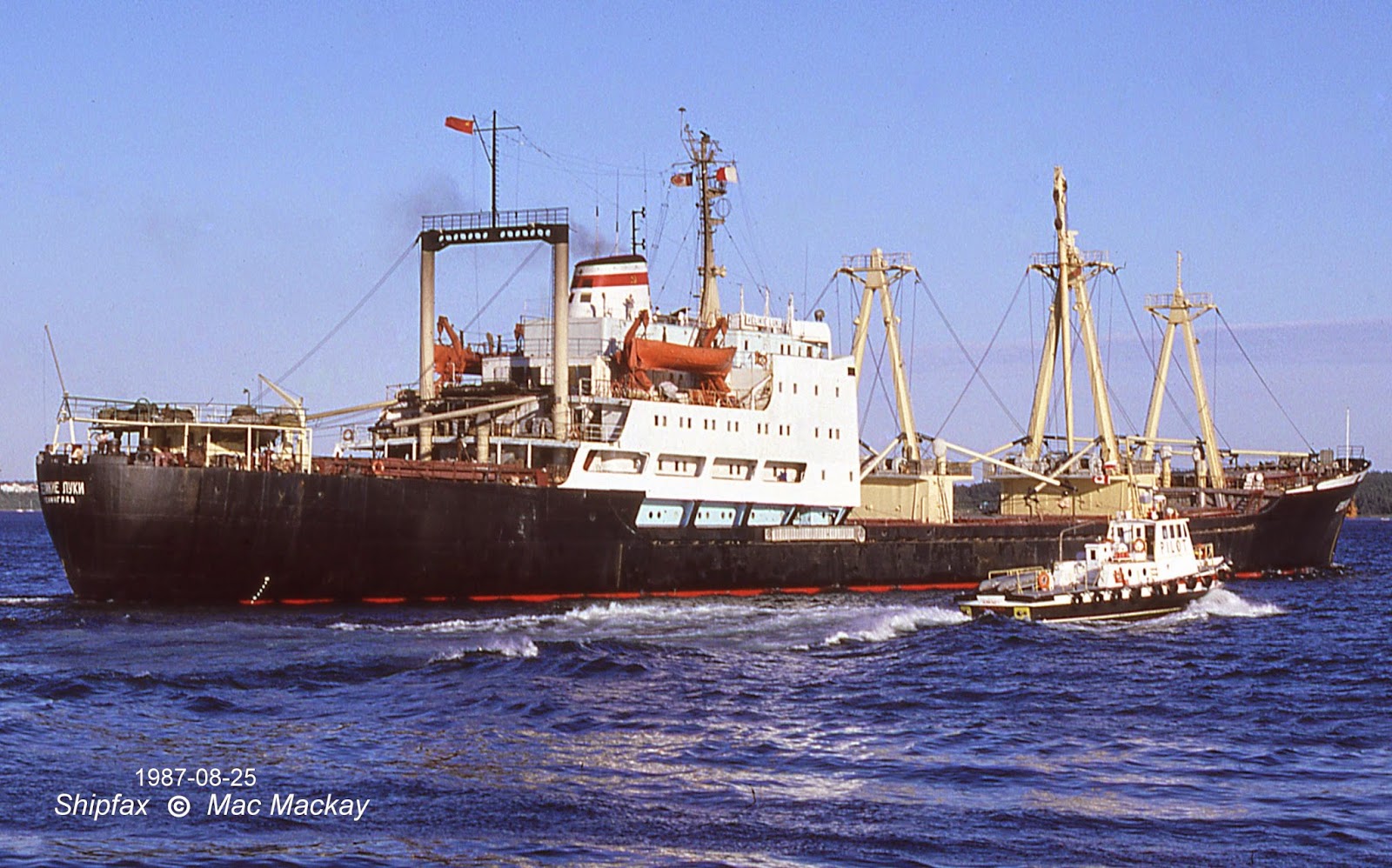 Velikie Luki, built in 1964, 9437 grt, 12,101 dwt, was another of the few Baltic Shipping Co vessels with a black hull. It was renamed Luki (St.Vincent and the Grenadines flag) in  1988 and arrived in Alang April 20, 1989. Derricks were more dangerous to stevedores, and there were two injuries while Velikie Luki was loading in 1987. 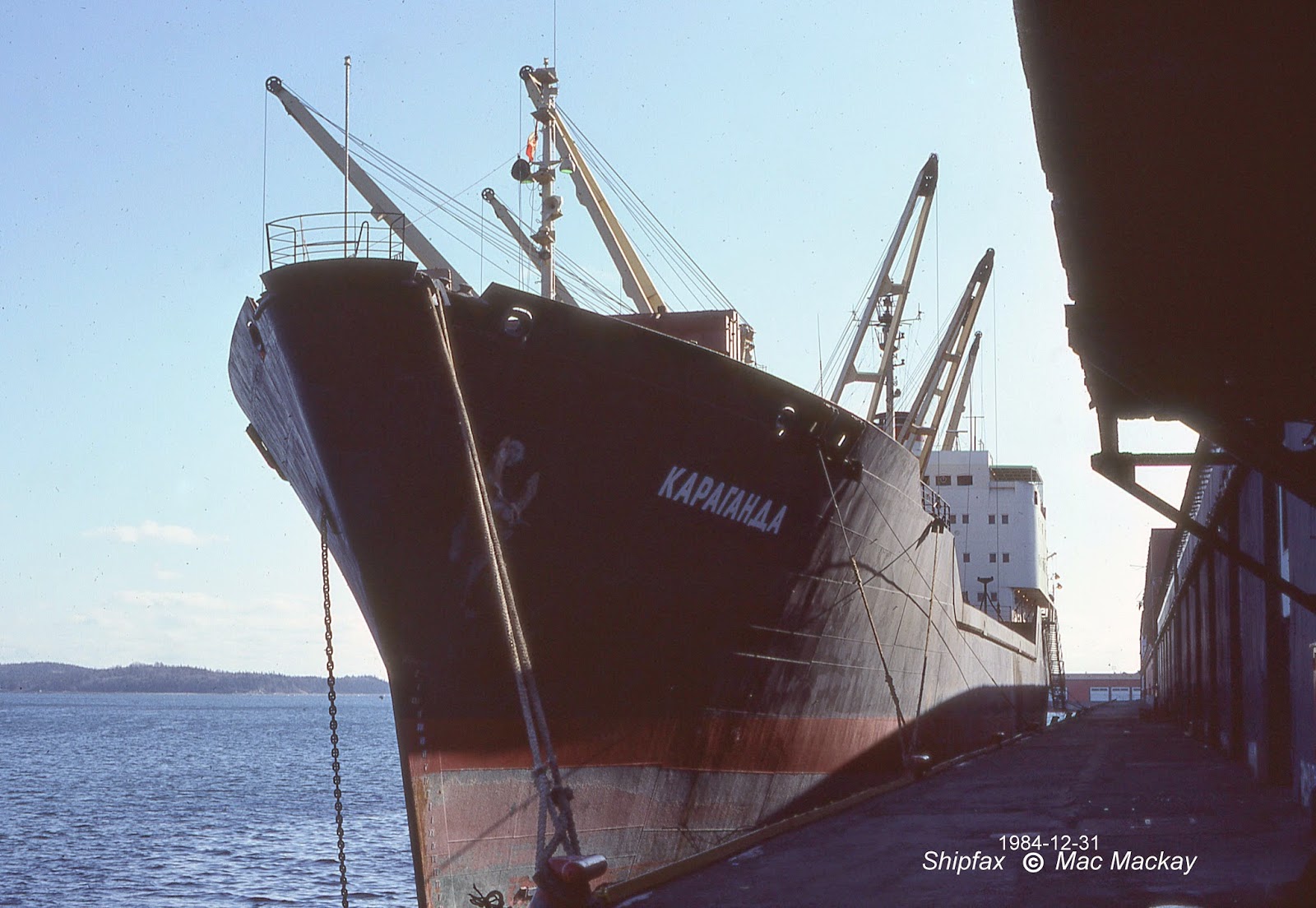 Work has stopped for New Year's Eve at pier 20, and Karaganda will be idle until January 2. Built in 1969, measuring 9748 grt, 12,530 dwt, it had also been painted black by 1984.On June 1, 1994 fire was discovered in its cargo when it arrived in Lorient, France from Semerang, Indonesia. The fire was deep seated and despite fire fighting efforts, broke out again the next day when unloading started and spread to other holds. Damage was beyond economical repair and the ship was taken to Aliaga where  it was broken up starting May 27, 1995.


Bonus Round
Not all the Russian cargo ships that came to Halifax were here to load flour.Some loaded grain (more about those another time).  There was also a liner service, carrying a variety of general cargo, and they also featured a wide variety of ships, which evolved rapidly over a short period of time. 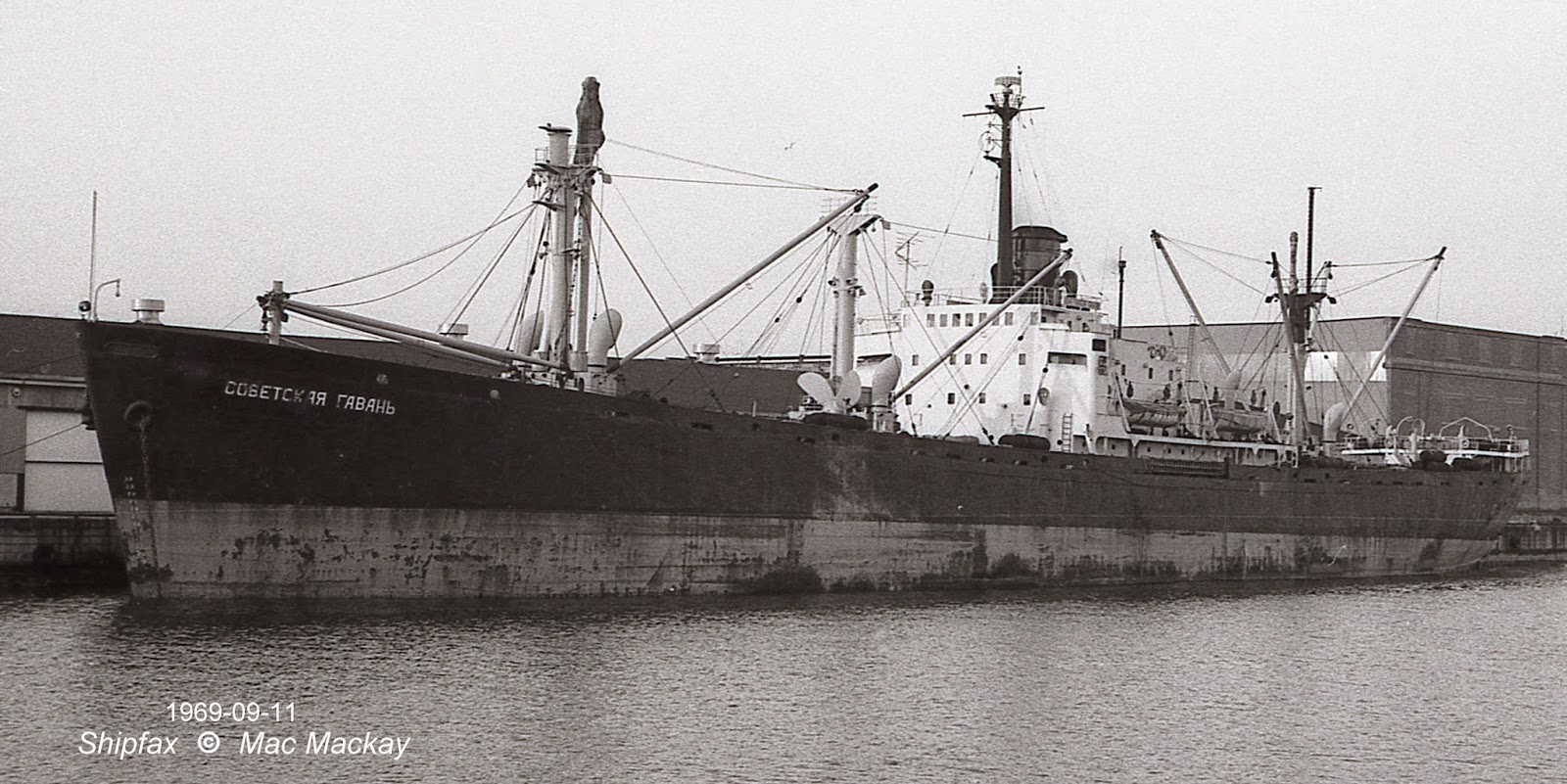 Sovetskaya Gavan was built in 1943 as the Liberty type Samuel A. Worcester by the Oregon Shipbuilding Corp in Portland, OR.

Of 7176 grt, 10865 dwt, its triple expansion steam plant was built by the Iron Fireman Manufacturing Co also of Portland, OR.It was transferred to the USSR in 1943 on the lease/lend plan and assigned to the Far Eastern Shipping Co. In 1947 it went to the Baltic Shipping Co. It was reported scrapped in Russia in 1975, and deleted from Lloyds 1978.
However it arrived in Bombay in 1990 where it was really scrapped.
Much modified from its original appearance, it has been rigged with a 15 ton jumbo derrick, in addition to its sual ten 5 ton derricks, a crow's nest, and new bridge. Note also the spare prop conveniently placed on deck amidships. 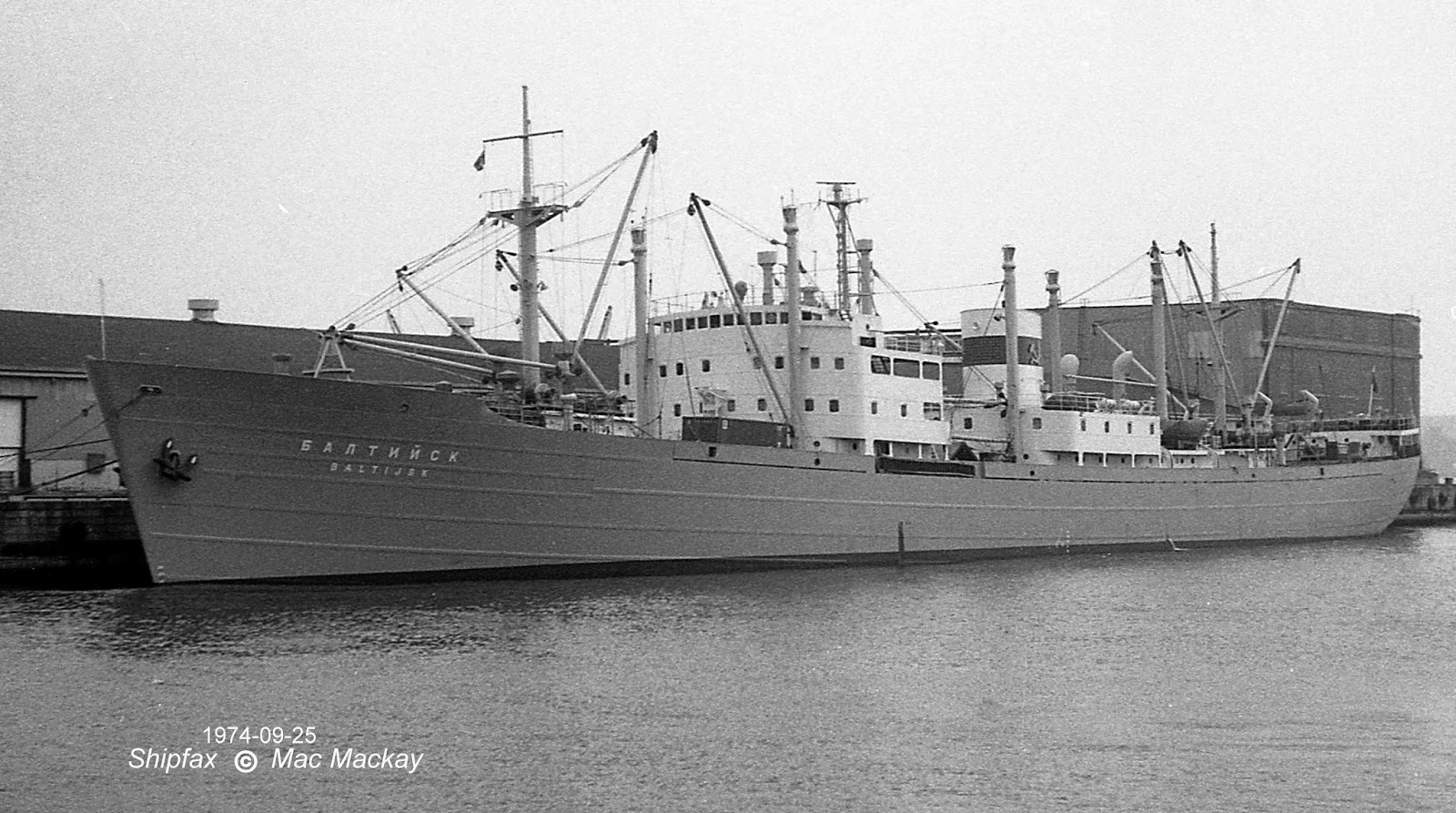 Baltijsk at pier 23 in 1974 was in pristine condition.

One of 18 ships in the Archangelsk class, Baltijsk was built in 1955 by Crichton-Vulcan in Turku, Finland. Measuring 5585 grt, 8120 dwt and carried sixteen 5 ton derricks. Although it was a motorship (with a 6300 bhp MAN) it had the split superstructure typical of pre-war steamships.It was broken up somewhere in Russia in 1982.
Note also that it does carry a Plimsoll mark, and was classified by Lloyds, so it was carrying insurable cargo. 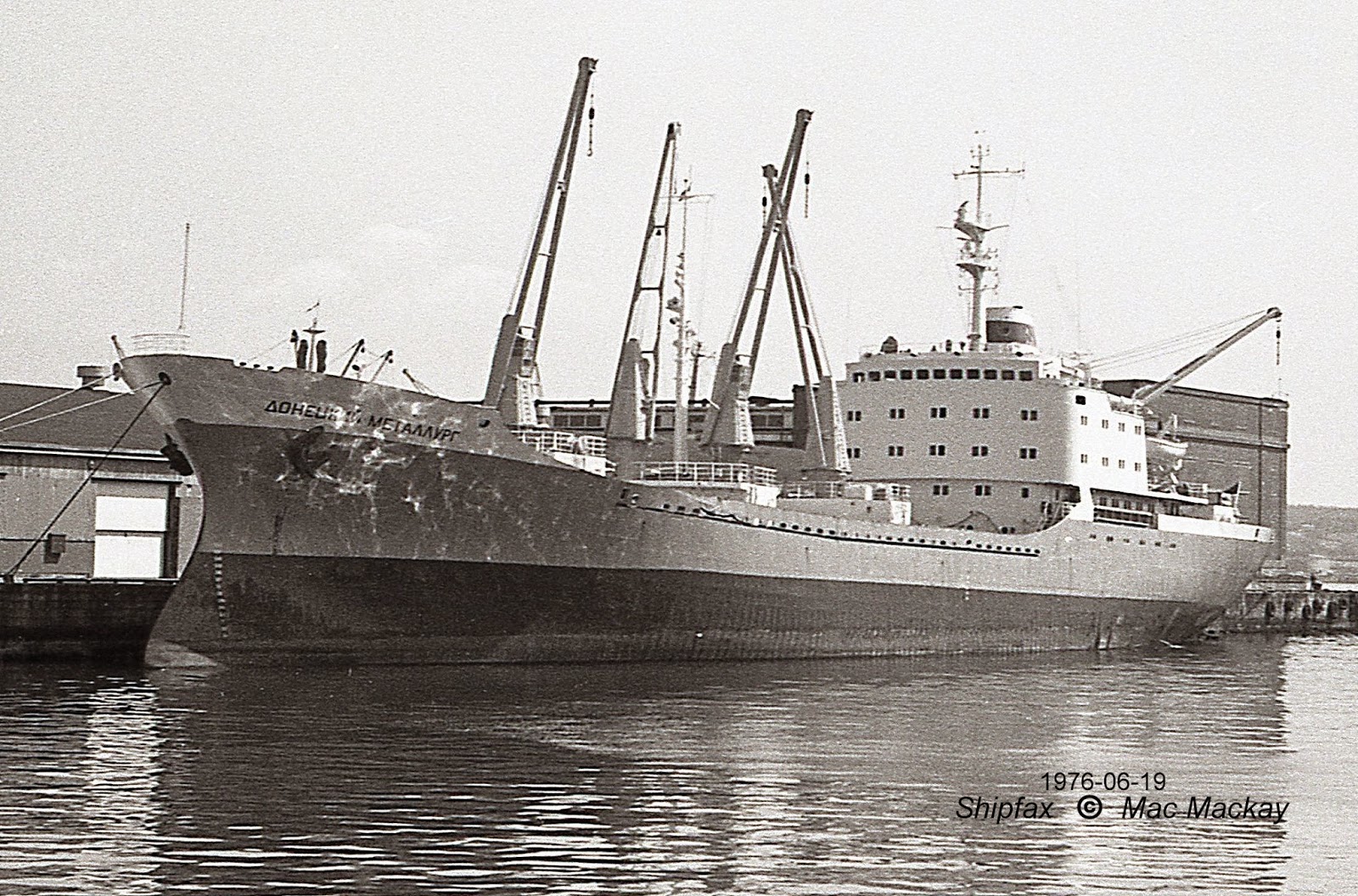 There were 32 ships in the Donetskiy class.All were built by the A. Zhdanov shipyard in Leningrad, and featured a bulbous bow and rather more modest tonnage of 6329 grt, 8290 dwt, but they were rated for 16.2 knots to maintain liner schedules. They carried five 8 ton cranes for rapid loading/unloading.
Rare amongst USSR ship, it was sold for further use. In 1995 it became Asih Global under the St.Vincent and Grenadines flag for Arab Shipping Co. until 1998 when it went to Al Dahab Shipping Co Ltd and was delivered to Mumbai January 31, 1999 for scrapping.

The end came for the flour trade in 1988, when Germany outbid Canada for the a six month contract to supply Cuba. Canada did get a "clean up" contract for the last half of 1988, but after that there were only sporadic spot cargoes over the years.
At the height of the contract in there were from 12 to 18 shiploads a year out of Halifax alone, with additional cargoes from Montreal.
With the break up of the USSR December 31, 1991, much changed, Russian shipping was privatized and the relaitionship with Cuba changed too. I also understand that a flour mill may have been built in Cuba, allowing it to import wheat and grains.