Nelvana - end of the road

The Panamax self-unloading bulker Nelvana arrived off Aliaga, Turkey April 24, and will be borken up in the very near future. 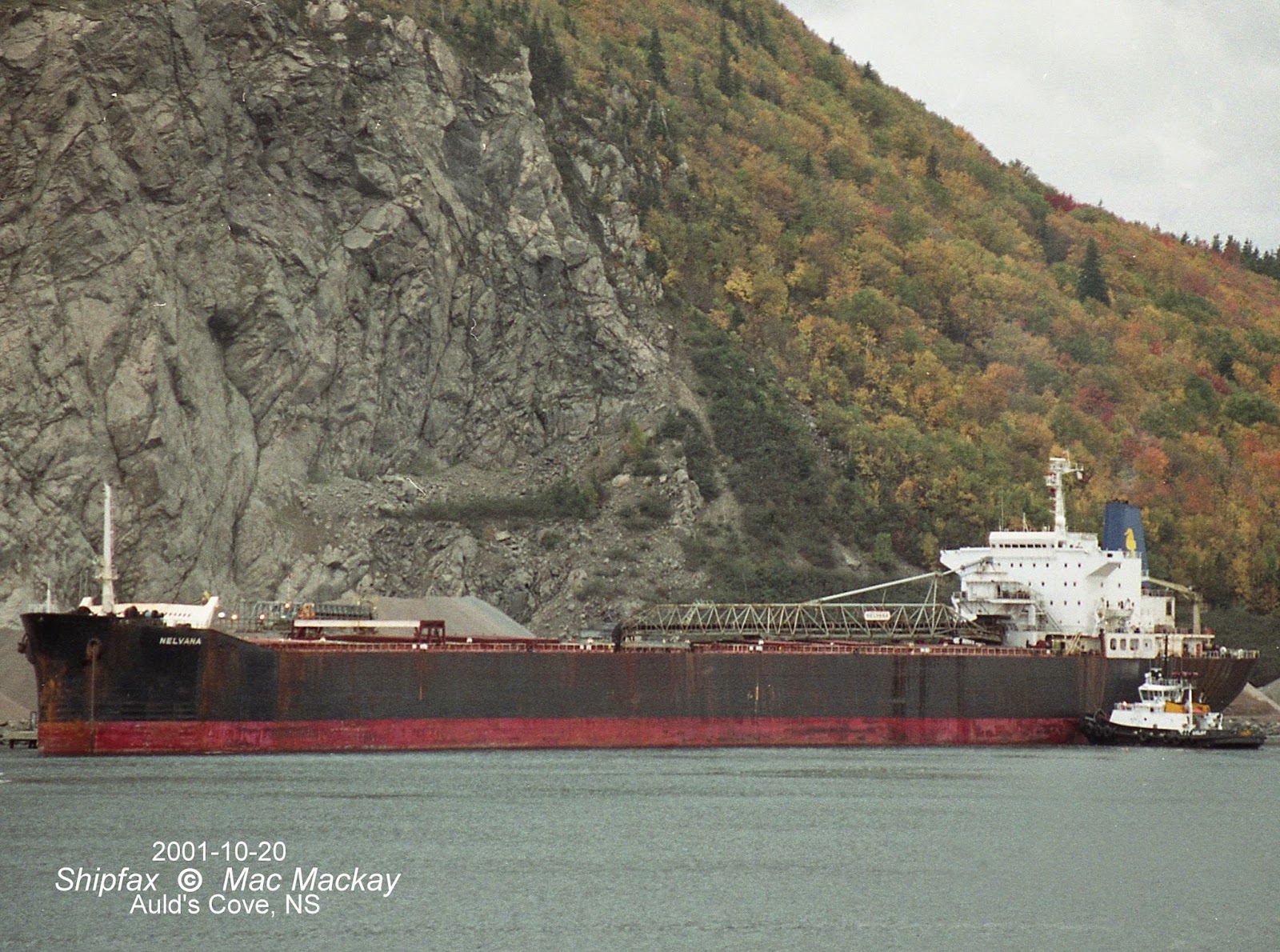 The tug Atlantic Willow assists Nelvana to her berth in Auld's Cove, with Cape Porcupine looming overhead. Nelvana alone is responsible for exporting several million tonnes of the mountain to the United States.

A rare caller in Halifax, it was better known on the Strait of Canso where it loaded out aggregates from Cape Porcupine for many years. It was also in the coal, phosphate, sand and stone trade in the Caribbean and was a frequent visitor to Tampa.

In Tampa Nelvana extends her boom out to a hopper which is connected to a system of conveyors that transport the cargo of aggregate to a series of stockpiles. (This portion of the port is no longer accessible to civilians.)

Built in 1983 by Hyundai Heavy Industries in Ulsan (it was launched December 4, 1982) and came in at 44,340 grt and 74,973 dwt. It was notable for its big bluff bow, which must have caused a lot of impact as it butted into head seas. A prominent breakwater on the forecastle head protected the forward hatches from seas breaking over the bow. 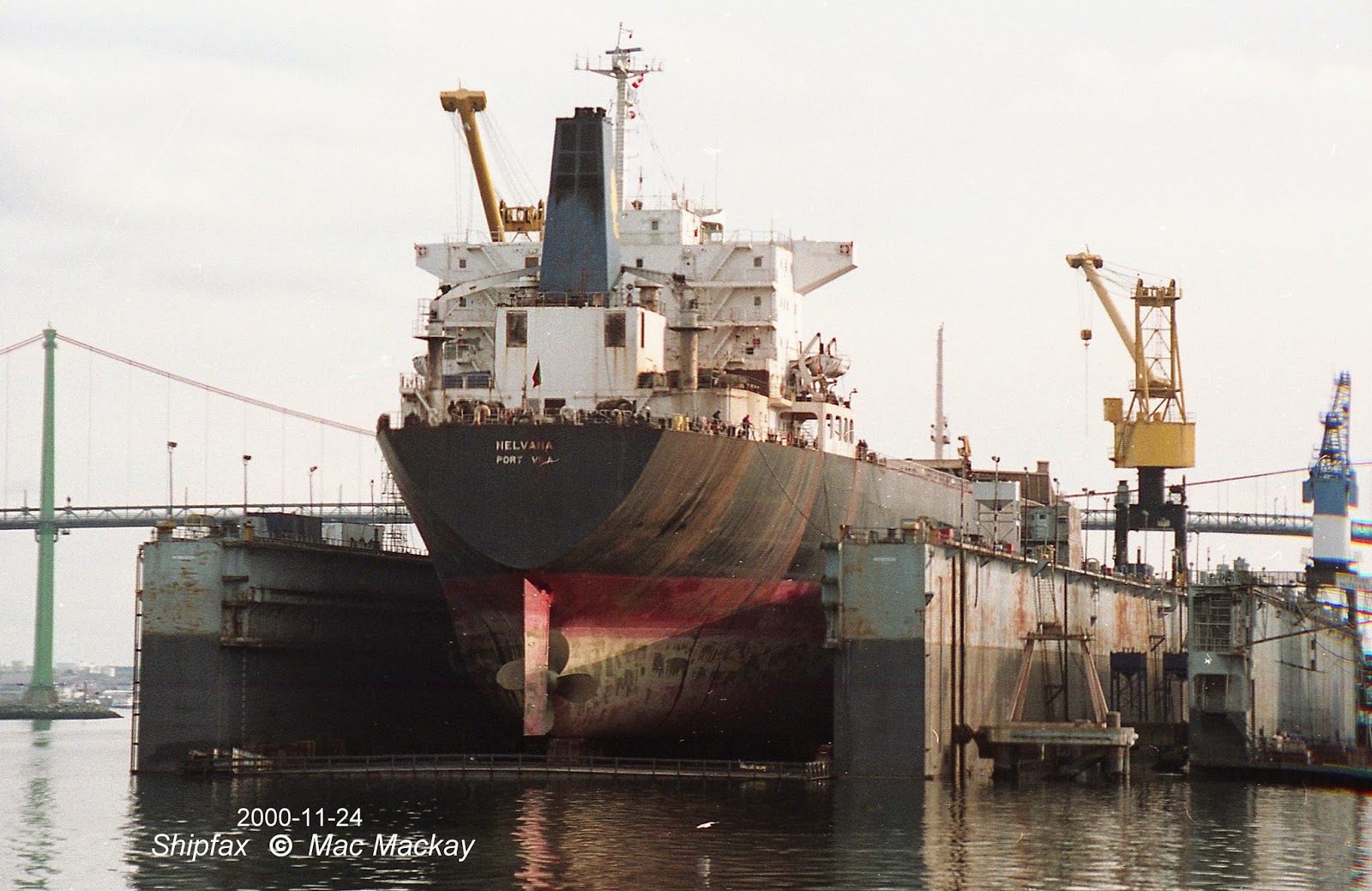 Nelvana filled the Novadock floating drydock at Halifax shipyard, which was built for Panamax ships.

It did visit Halifax in November 1998 and again in November 2007 when it was drydocked at Halifax Shipyard. It was too large to take a full load at National Gypsum.

Built for Marbulk Carriers, when Marbulk Shipping Ltd was owned by Upper Lakes Group, it wore the golden seahorse on its blue funnel, and may be the last ship to do so. It was intially registered in Liberia then 1987 switched to Vanuatu. When Marbulk was sold to Algoma and CSL the ship remained in the CSL pool and  worked on both the Pacific and Atlantic Coasts and in Europe, once unloading 65,000 tonnes of granite in Liverpool, UK.

New ships were added to the CSL pool in recent years and now all the Marbulk ships (Ambassador and Pioneer were the other two) have now gone to the scrappers.


In 2012 Nelvana's registry was moved to Bermuda, and the ship was advertised on the Beltship Management Ltd website and worked along with Gypsum Centennial and Gypsum Integrity in the Sierra Leone iron shuttle which has ended. (The latter ship has now been sold to Algoma, see April 12  .)

The golden seahorse funnel mark can be traced back to the Upper Lakes ship Wheat King , which was flagged out for a time to Island Shipping, when ULS's owner Jack Leitch was fighting for the survival of his company with a convicted hoodlum union boss. Leitch eventually prevailed, the company survived and Marbulk was formed to operate ULS's deep sea fleet. The seahorse became emblematic of the company's determination to succeed.

The book Upper Lakes 1932-1982, actually titled The First 50 Years, by Wally Macht, privately published by the company, is well worth the read if you can lay hands on it.

Upper Lakes is no more - the company sold off all its assets, and the significance of the golden seahorse is lost.
See some previous Shipfax references: http://shipfax.blogspot.ca/2012/02/ambassador-for-gypsum-only-ship-2-for.html 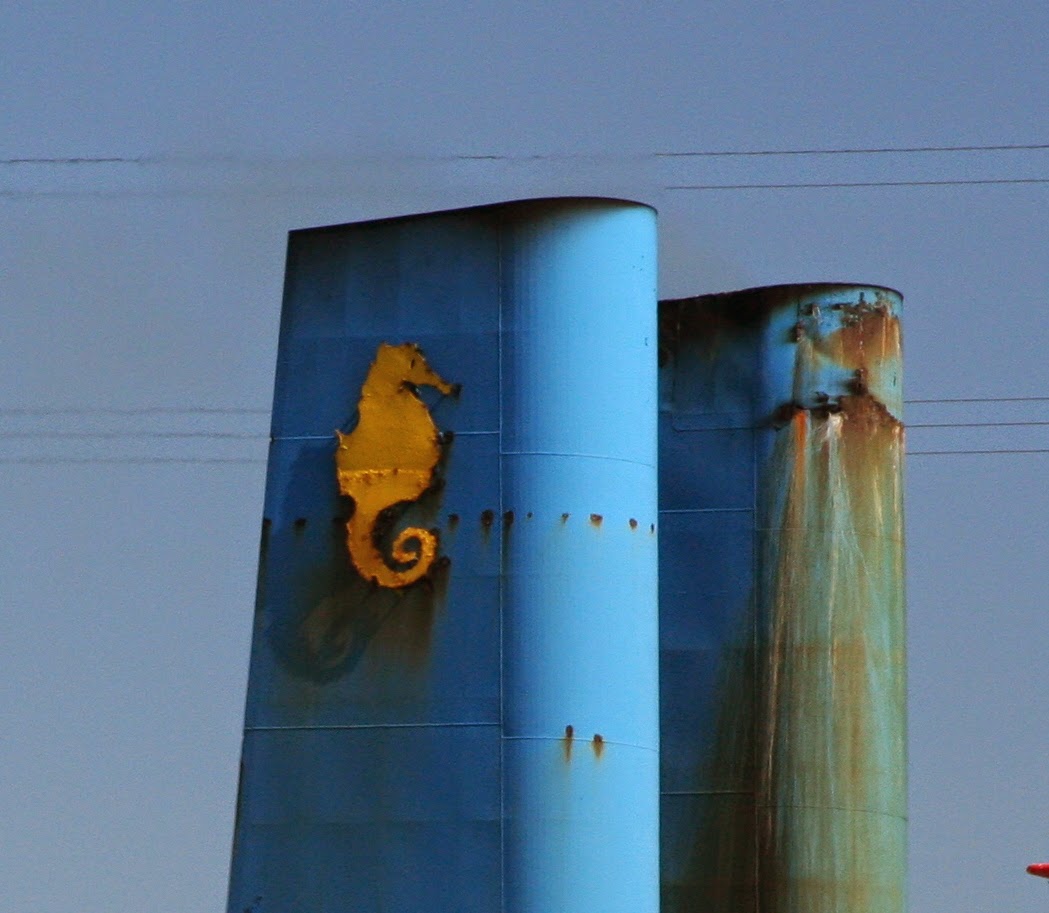