Skogafoss and other Icelandic matters

Today's arrival and departure of Reykjafoss was the only activity at Halterm all weekend. This is no doubt due to ships working to avoid Easter overtime in other ports adjusted their timetables accordingly. Also the weekly Maersk ship will not be arriving until tomorrow, but that is another story.

Reykjafoss is the fifth ship to carry that name for H/f Eimskipafeleg Islands (The Icelandic Steamship Co) better known simply as Eimskip. 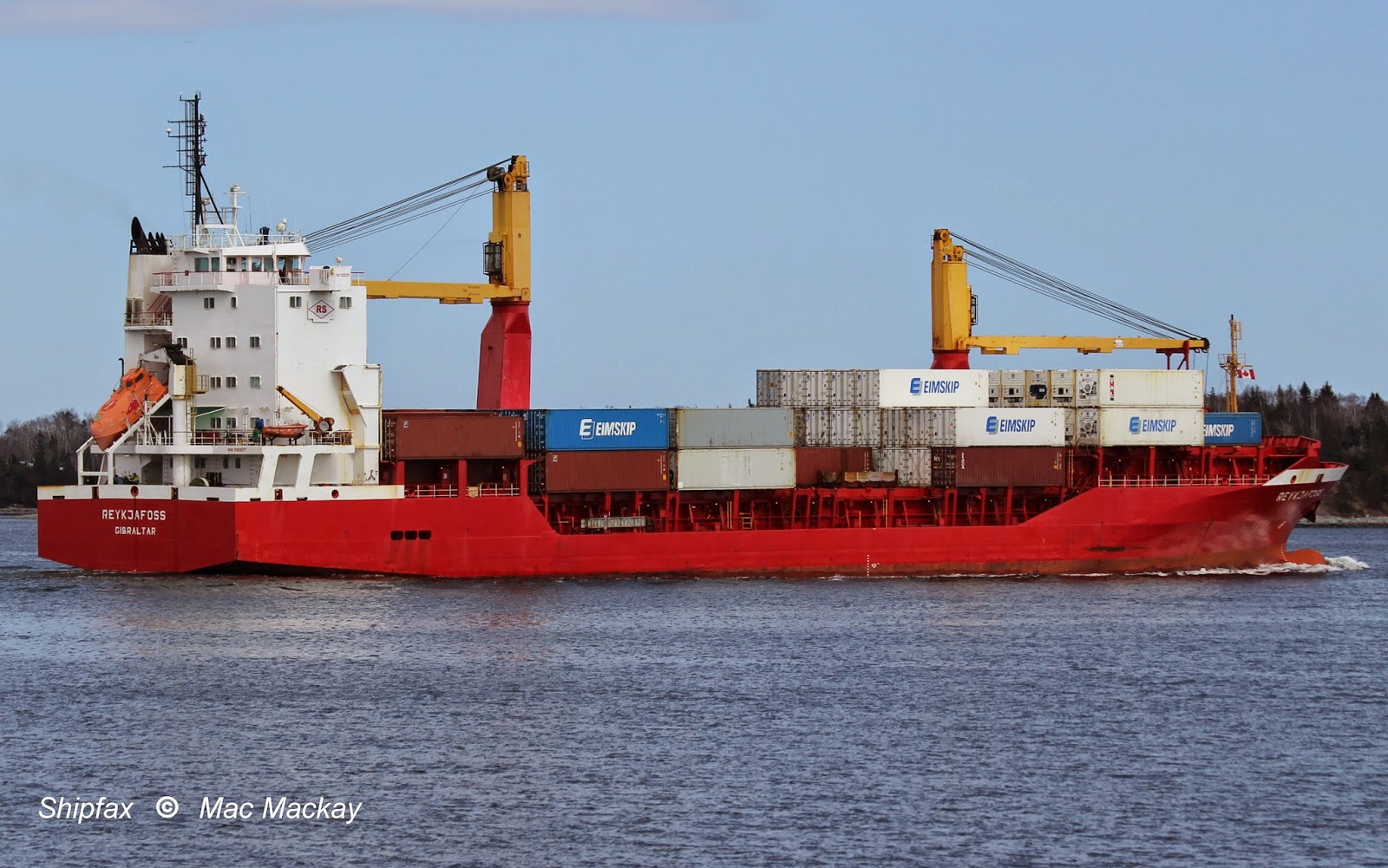 Built in 1999 by Schiffswerft und Maschinenfabrik Cassens  GmbH in Emden, the ship has been owned since 2014 by Romy AS and managed by Myklebusthaug Management AS of Fonnes, Norway, under the Gibraltar flag. It was previously owned by Hermann Buss of Leer, Germany, and managed by Reider Shipping BV of the Netherlands. It has carried the names Westersingel to 2000, then Express Italia, X-press Italia,  01: Westersingel, 03: MSC Bosphorus, 04: Western, 05: Westersingel, becoming Reykjafoss in 2005.
It has two 40 tonne cranes and a capacity of 730 TEU on 7541 grt, 8450 dwt.

A previous Reykjafoss [number 4 with the name] operated from 1984 to 1999 and was also a regular caller in Halifax. 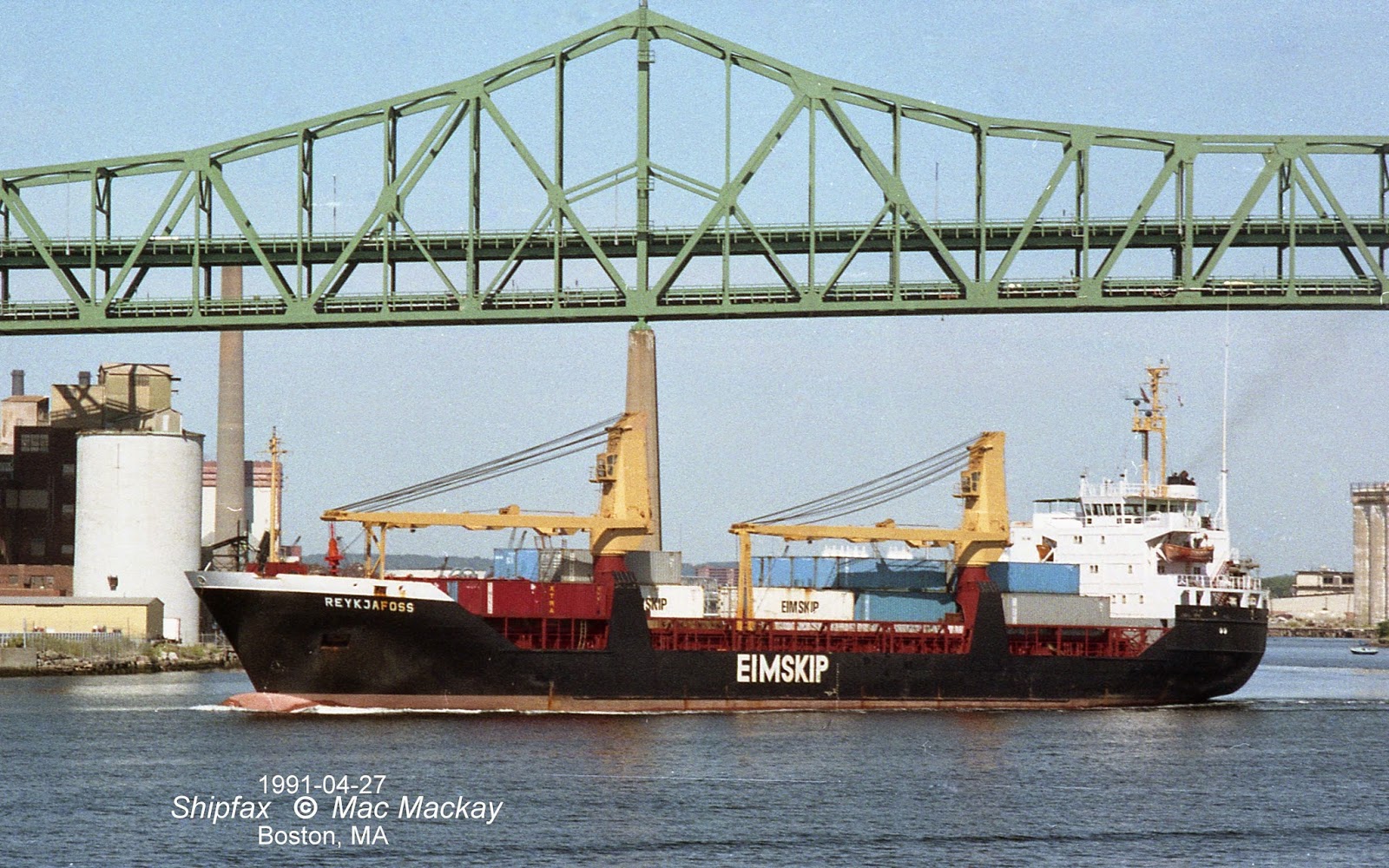 Reykjafoss [iv] in Boston, once one of its regular stops.

It was built in 1979 by J.J.Sietas of Nuenefelde, Germany as Regulus. In 1984 it was chartered to Eimskip and at the same time was converted from a general cargo ship to carry containers in fixed cell guides in the hold and on deck. It retained its two 35 tonne cranes and had a capacity of 308 TEU. The ship measured 3726 grt, / 5788 dwt as built, and  4226 grt / 4070 dwt as converted.
When the charter ended in 1999 it was sold and renamed Carnation, then in 2011 Span Asia 3 under the Philippine flag, and is still trading.

Eimskip has owned or charted some 80 plus ships its founding in 1915. Some of them were real beauties (in my opinion). The sisters Bruarfoss and Selfoss, were particularly attractive.

The lovely Bruarfoss was not built to carry containers, but managed to do so anyway.

Built in 1960 by Aalborg Werft A/S, Denmark, the 3220 grt ship called in Halifax regularly until September 16, 1980 when it collided with the Panamanian flag John M. off Lockeport, NS.

John M. , with a Bruarfoss shaped hole in its side. It reached Halifax September 18, 1980 where it was drydocked for repairs and sailed November 16, 1980. [see footnote]

Bruarfoss was declared a constructive total loss, Eimskip took the insurance money and the ship was sold to Panamanian owners. It grounded off Brownsville, TX, November 2, 1982. It was resold in 1984 and renamed Horizon and arrived in Brownsville from Puerto Cortes ostensibly for scrap, but was again resold. As William Reefer in 1986, then Triton Trader later the same year, under Honduran flag.
On December 15, 1987 it was abandoned 300 miles SE of Halifax on a voyage from New London, CT to Ashdod, when its cargo of particle board shifted in a storm. The 13 crew members were taken off the Cyprus flag Nordwind and landed in Halifax.
By the time the tug Irving Miami reached the ship, it was 567 n.mi. SE of Halifax and it took 30 hours for a boarding party to get a line aboard. Despite a 30 degree list, the ship reached Shelburne, in tow, December 24.  A lengthy repair process ensued, and the ship remained in Shelburne until 1988 when it was again sold. This time renamed Global Trader, the ship was arrested and sold once more in 1989. Renamed Triton Trader it moved, possibly under its own power, to Point Edward, NS but was again laid up. A Philippine watchman hired to guard the ship died from carbon monoxide poisoning and hypothermia from a charcoal fire he was using to keep warm
On April 26, 1990 the ship left Sydney harbour in tow of Pacific Rescuer and arrived in Alang, India August 18, 1990 for breaking up. 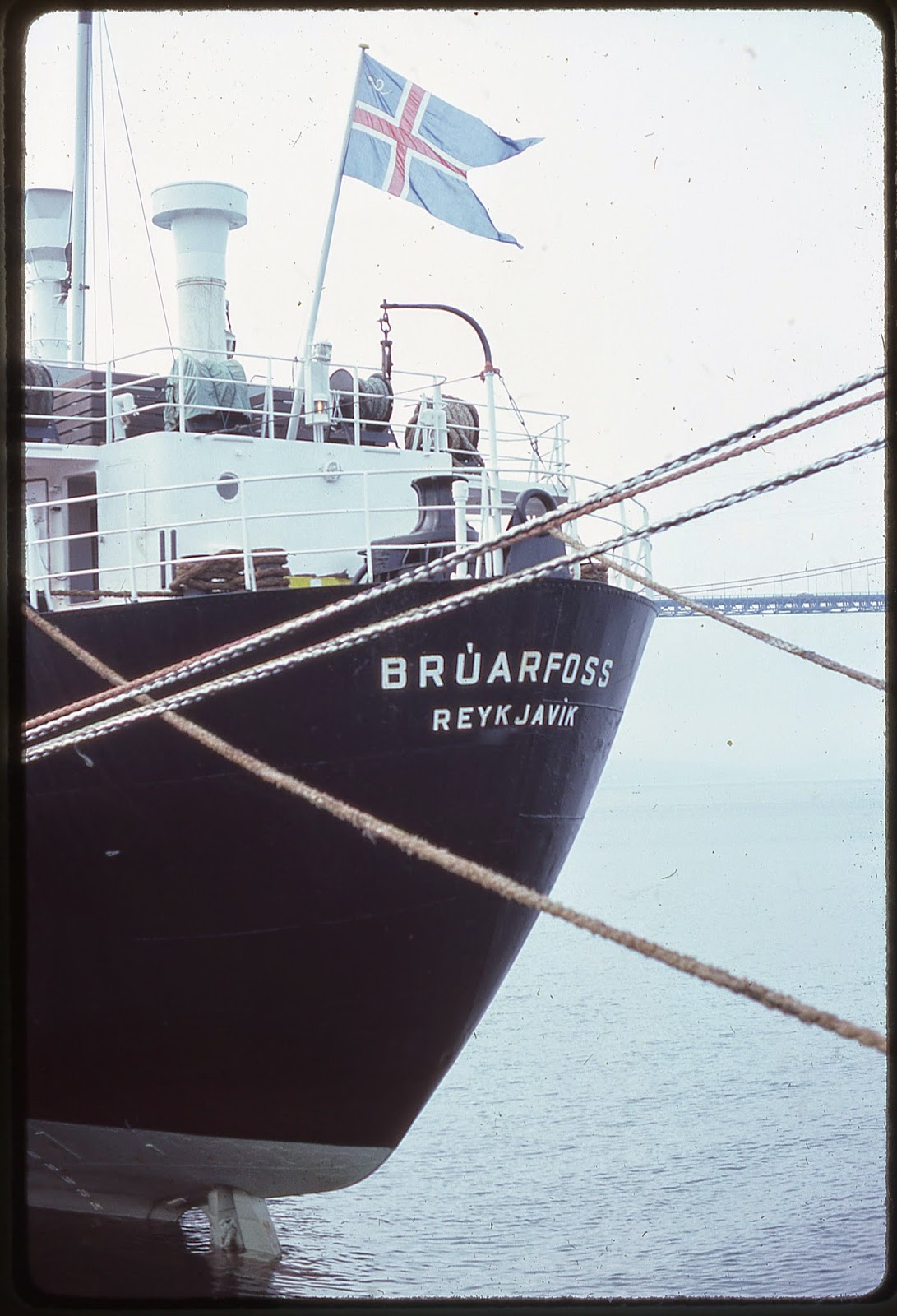 Footnote:
John M. was built in 1970 by Lindenau, Kiel as John M. Rehder for Carsten Rehder. It measured 3999 grt, 6333 dwt, and carried one 15- 25 ton and four 5 ton derricks. It had three holds, and was fortunately holed in the smallest one, number one, which was well protected by secure bulkheads. Its pulpwood cargo was also helpful in keeping the ship afloat.
Following the collision it was unloaded at pier 24 in Halifax, drydocked from September 30 to November 10, reloaded and sailed. In 1983 it was renamed Milas and in 1985 Neapolis and was broken up in Perama in December 1985.