The ships of Rederi AB TransAtlantic of Sweden and its predecessor company Gorthons were once frequent callers in Halifax for bunkers and voyage repairs. Specializing in carrying paper products, they used to call in ports all over eastern Canada. With the decline in the production of paper in Canada the fleet has shrunk to a mere shadow of its former self, and usually there is only one ship* on this side of the Atlantic.
This morning TransPine crept in at dead slow speed and tied up at pier 27. It has recently brought a cargo from Europe to the US but had been lying idle off Florida for some time. 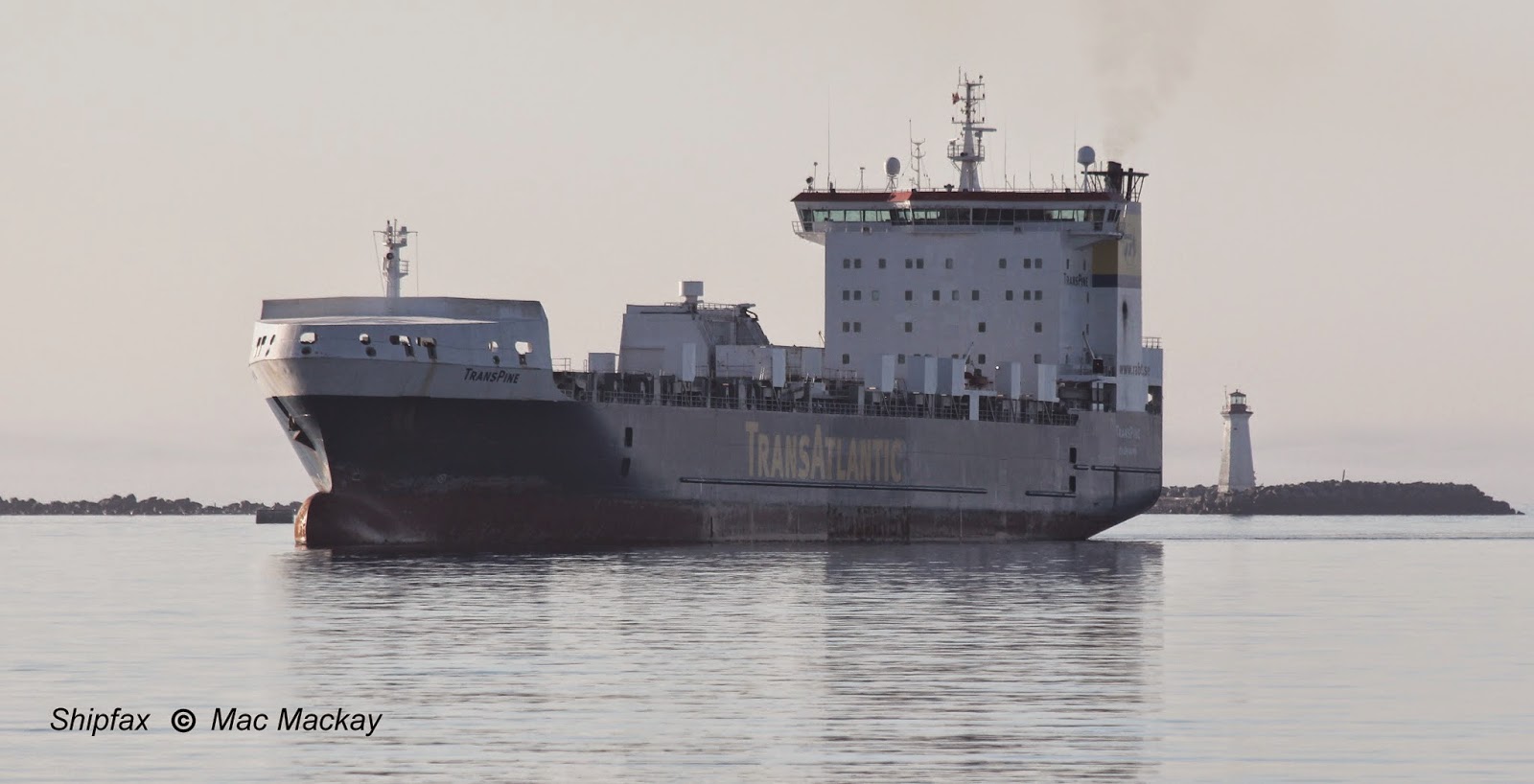 Classed as a RoRo ship, it has a stern ramp and it is also equipped with a side door and loads paper rolls by means of a conveyor and elevator system. The rolls are then positioned within the ship by forklift trucks.
In February 2008 it was damaged in a grounding off Pointe-au-Pic, QC and was drydocked in Méchins, QC for repairs which were completed by March 8.

Sister ship TransWood approaching Pointe-au-Pic in 2011 shows its working side, with the side door in the open position: 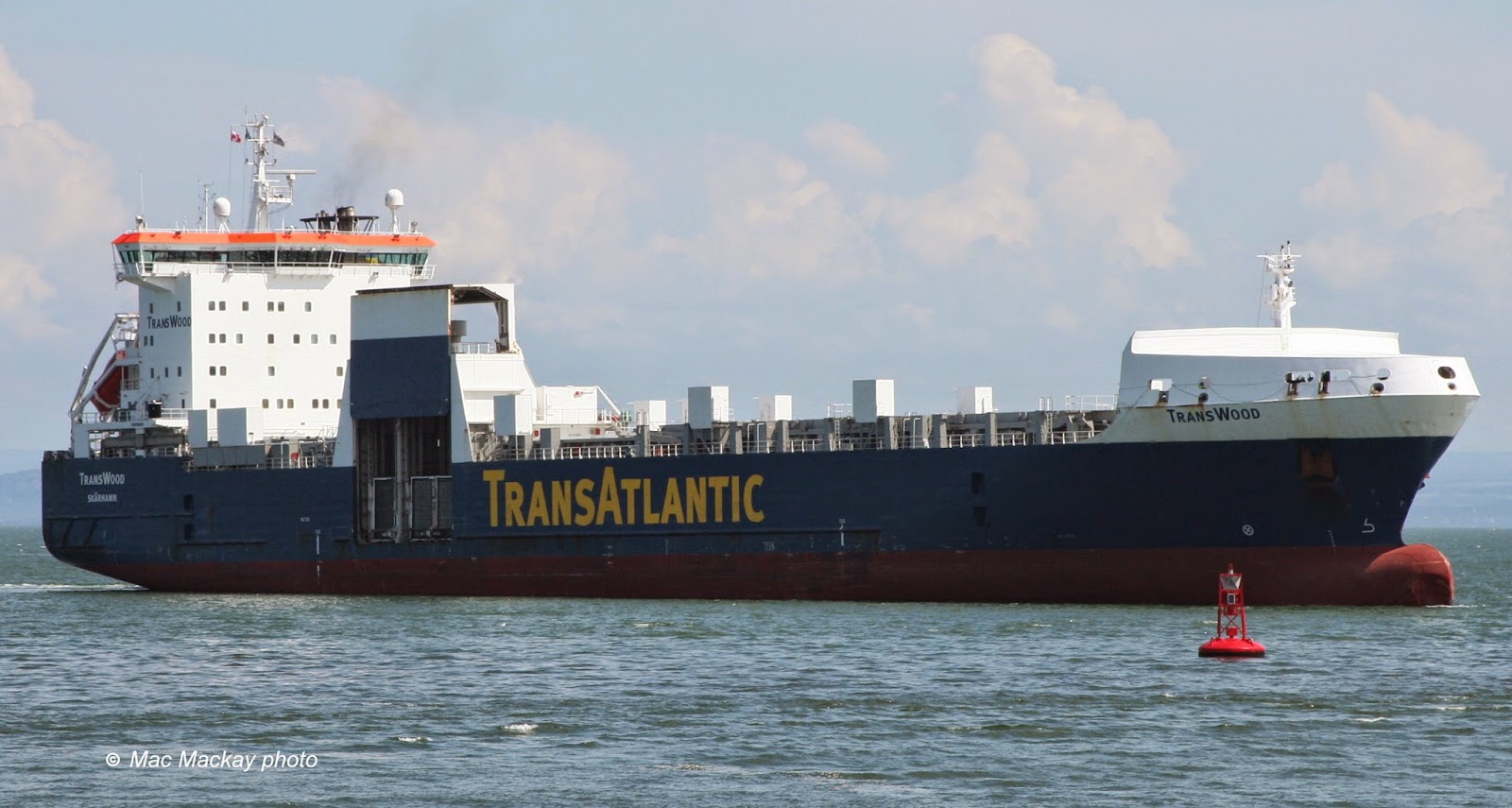 The buoy marks the shallows where TransPine grounded. A 14 ft tidal range and some strong currents make it a tricky place to work, particularly in windy conditions, since there are no tugs nearby. 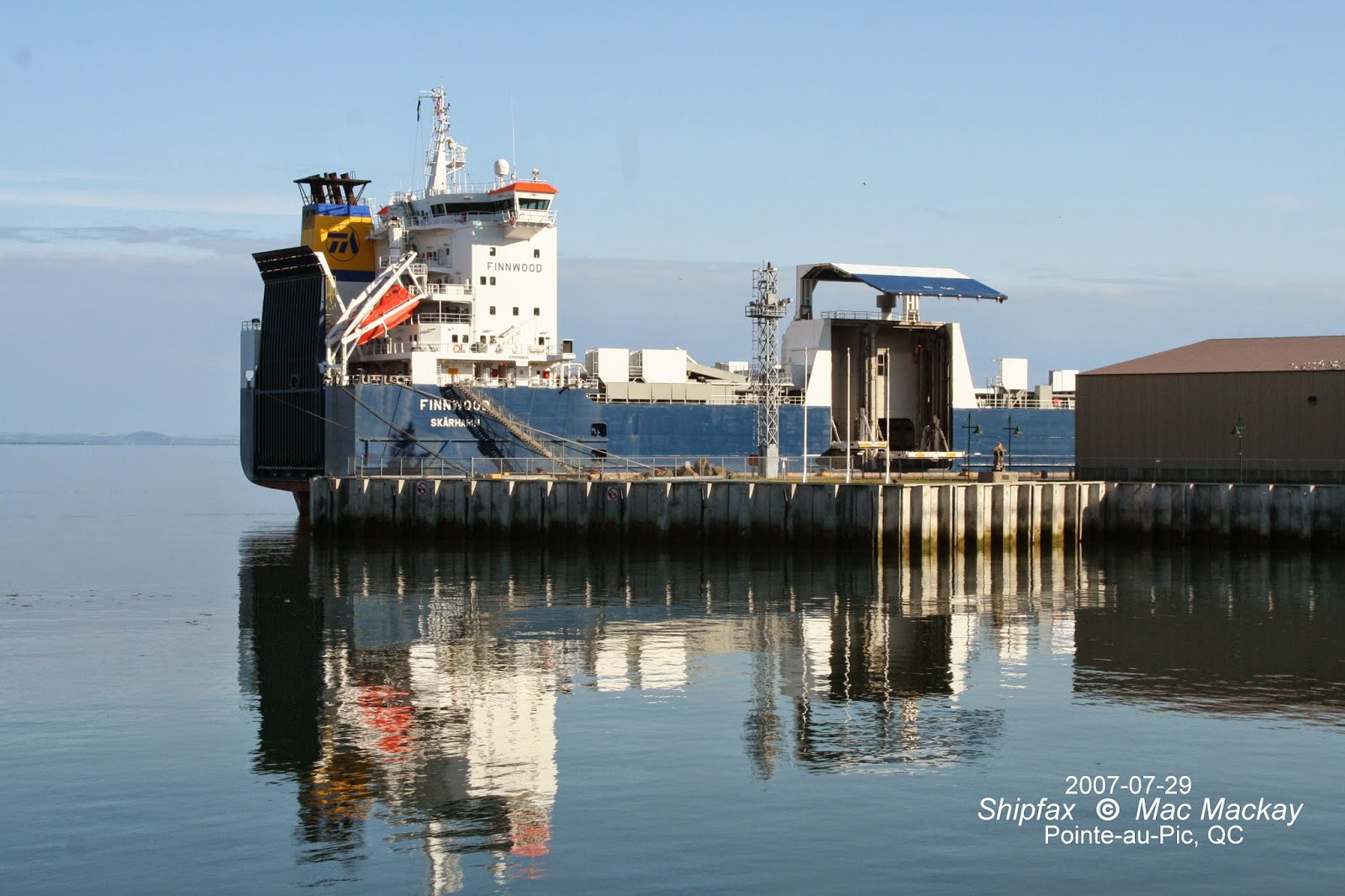 In 2007 the same ship, but as Finnwood, is berthed and ready to load. The side door forms a shelter for the elevator loading platforms. TransWood now works exclusively in North Europe.

A third sister ship TransFighter has been working between Corner Brook and US east coast ports of Portland and Newport. In fact, at time of writing it is passing Halifax, well offshore, bound for Corner Brook. It is owned directly by RABT whereas the TransWood and TransPine are bareboat chartered from a UK subsidiary called Longitude Shipping UK Ltd.

Rederi AB Transatlantic (RABT) has two separate operating divisions, industrial shipping, known as TransAtlantic, and Viking Supply Ships The industrial shipping sector has been hard hit by the downturn in the world's forest products industry, and in 2014 divested 13 ships, and will drop at least two more in 2015, leaving only 19 ships. The Viking branch, which now accounts for most of RABT's profits operated 13 ships in 2014 (down from 14 in 2013). It was recently announced that the company will be renaming itself Viking Supply Ships, so industrial shipping and the TransAtlantic presence appears to be on the way out.
Shares in RABT are traded on the Swedish stock exchange, but the majority are owned by Kistefos AS, a Norwegian holding company owned by Christen Sveaas.


Footnote A fleetmate, named TransHawk ex Sandon, a conventional cargo ship, made an appearances in Canada in 2014 when it was in the St.Lawrence Seaway bound for Hamilton, Cleveland, Detroit and Thunder Bay. It is presently in the Lanoraie anchorage near Montreal, with agents shown as Fednav, and looks to be heading up the Seaway again this year.
RABT announced that it would be divesting its two bulk carriers this year and this ship may be one of them.