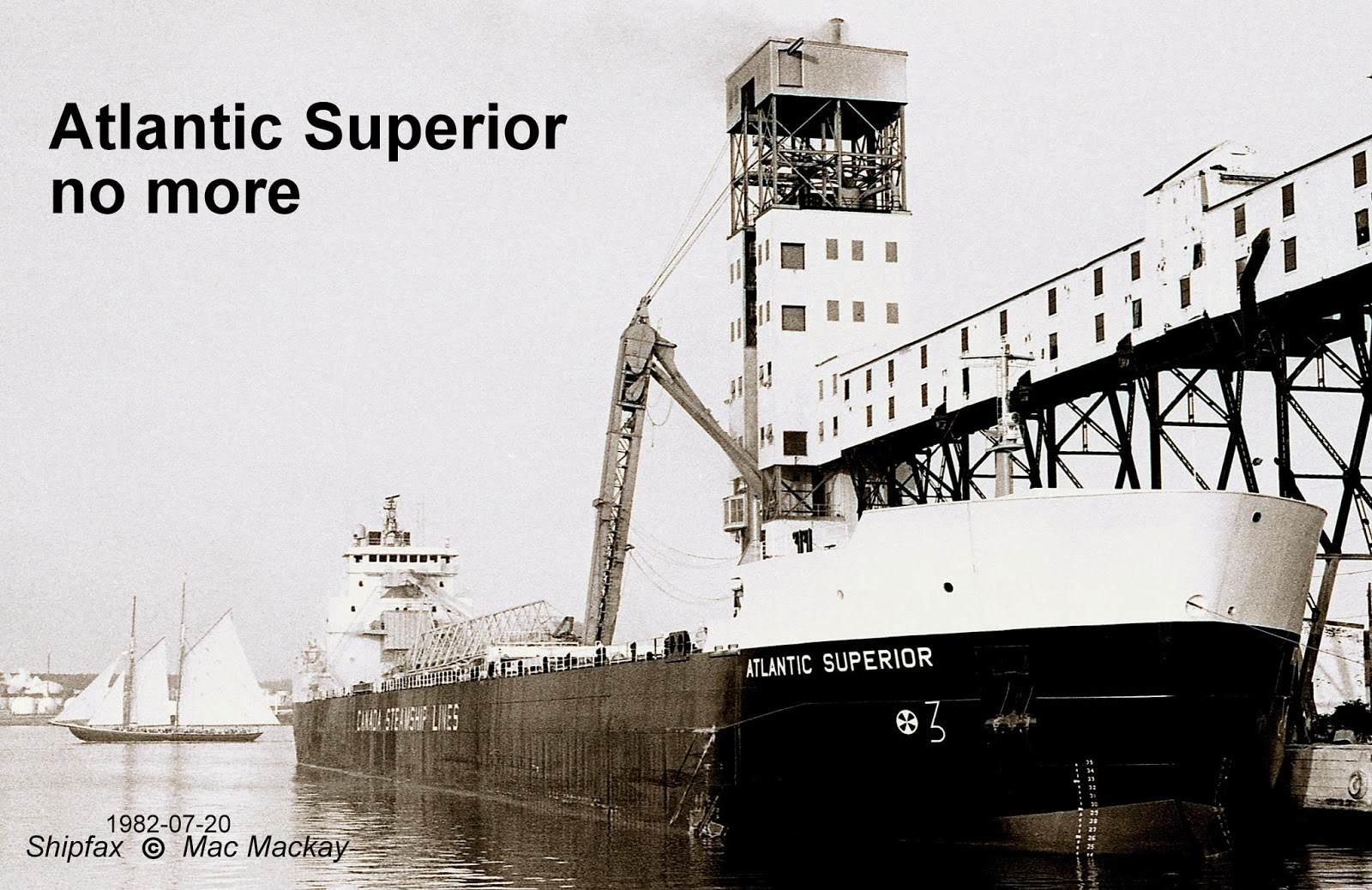 The latest name to join the regrettably lengthening list of ships sold for scrap is Atlantic Superior an on and off caller here since 1982. 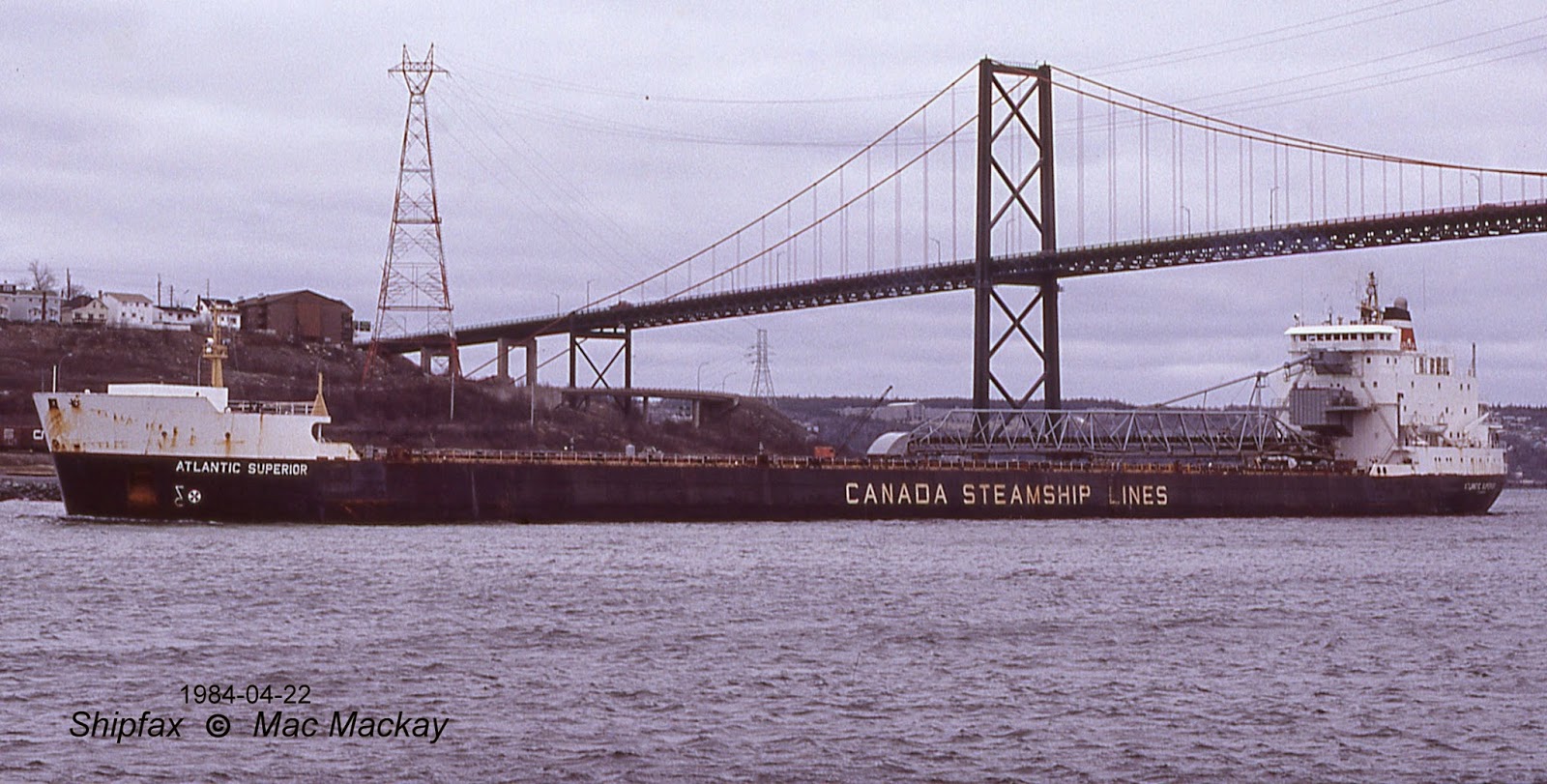 Loaded to deep draft, the ship sails out the Narrows with another cargo of gypsum.

Built for Canada Steamship Lines as their first domestically built self-unloader for deep sea trading (previous ones were restricted to the Lakes or to coastal work) the  ship measured 730' x 76', the maximum allowable St.Lawrence Seaway dimensions when it was built. Its depth was 50', allowing it load to deep sea draft.
Its tonnages were 24,638 grt, 38,510 dwt.

It was powered with a 6 cylinder Sulzer engine driving a single controllable pitch screw in a steering nozzle.  The system required a great deal of maintenance and several times the ship was seen at pier 23 with its bow ballasted down for repairs. 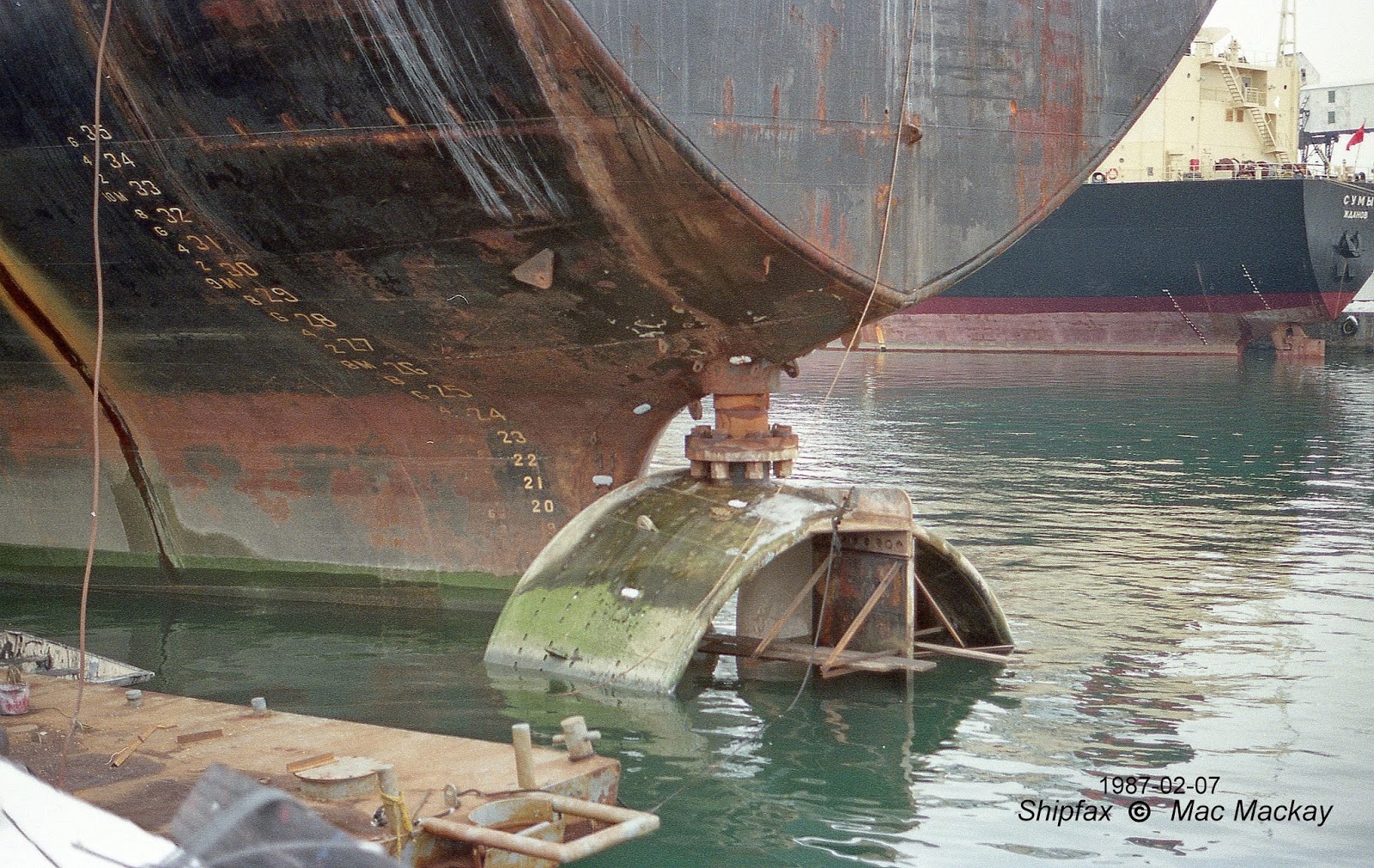 Workers have welded platforms to the nozzle/rudder blade to permit work on the prop.

The ship's first trip was with grain for Halifax, and it continued to call here regularly for gypsum, but was often assigned to overseas work for lengthy periods. It worked the Caribbean, Pacific Northwest to Mexico and in Europe, ranging from Portugal, to the UK, Netherlands and Norway, carrying coal or aggregates.
In 1986 it was transferred to Bahamas flag, but was back under Canadian flag, and registrered in Halifax November 10, 1986 (it had previously been registered in Collingwood.)

The ship lost its Canada Steamship Lines banner when it was flagged out.

It took up a long term charter with National Gypsum and was renamed  M.H.Baker III and flagged out to the Bahamas March 30, 1987. It was a regular caller here after that, loading for US ports as far afield as Tampa, FL. 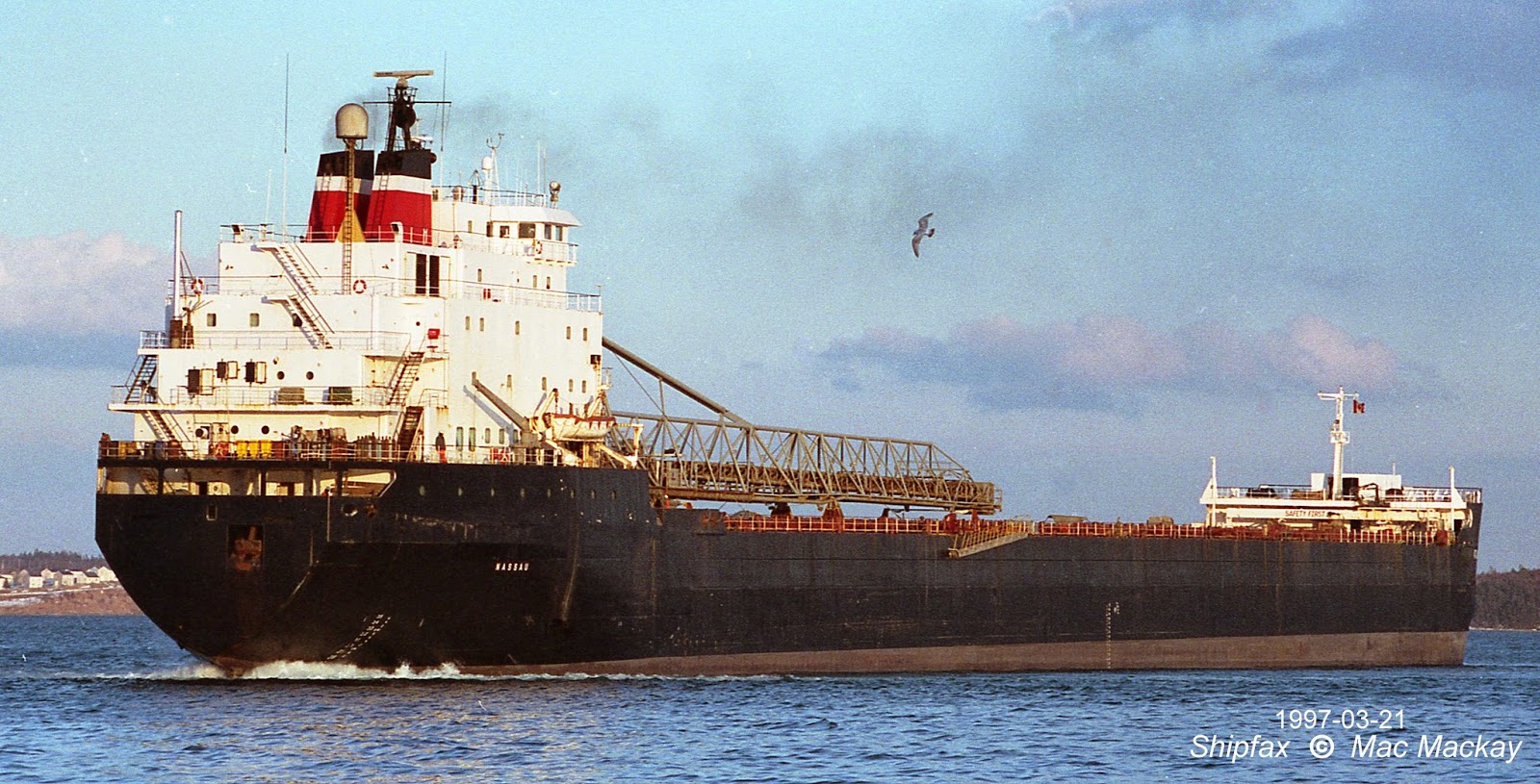 Immediately after being renamed, the ship sailed with a tiny "Nassau" port of registry, and the new name on the bow only.

The third ship to carry the name of Melvin H.Baker, founder of National Gypsum, it loaded to varying drafts depending on the season, and the destination port. 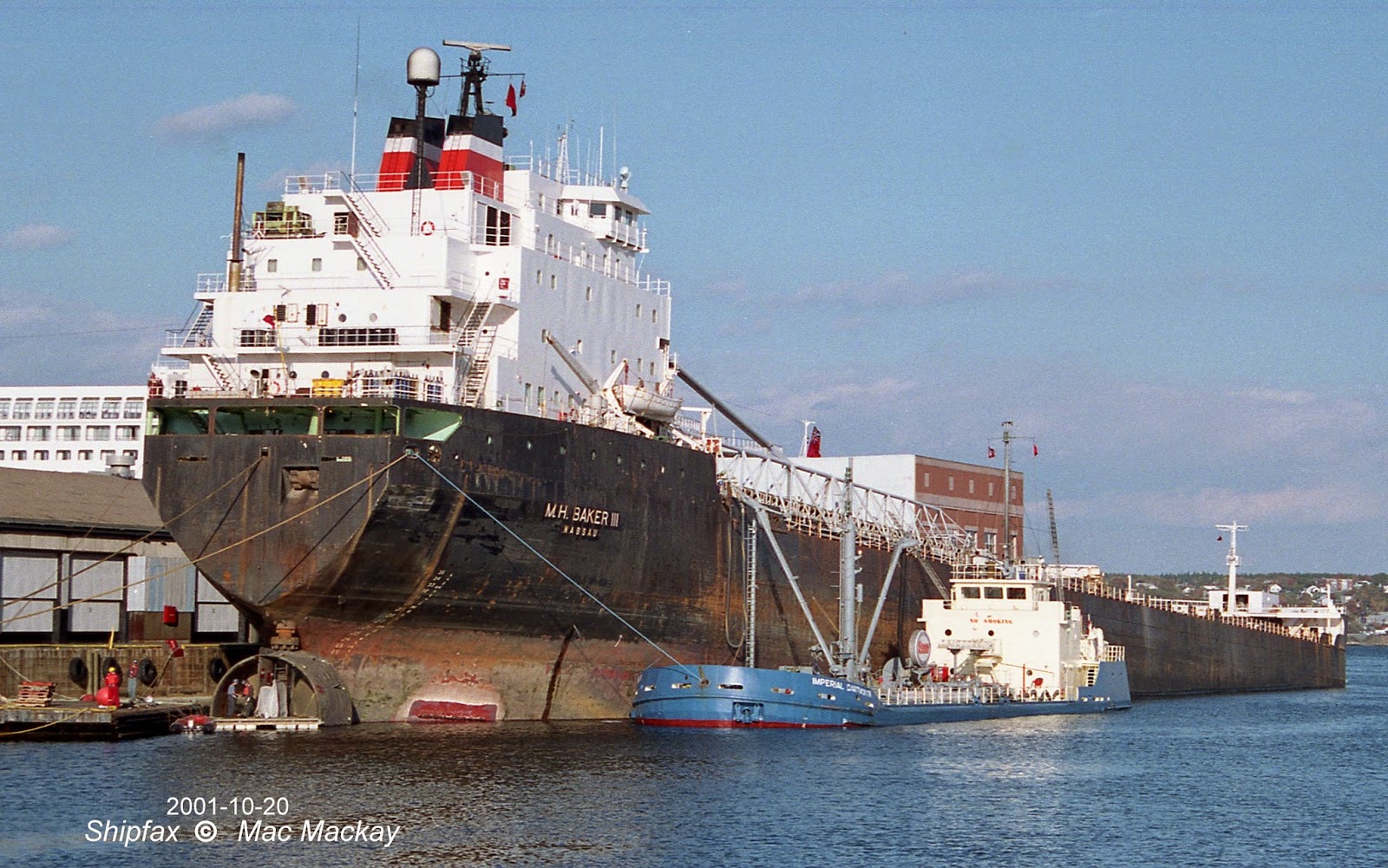 M.H.Baker III bunkers from Imperial Dartmouth (also built at Collingwood) while it undergoes repairs to its steering prop / nozzle (again).

In 2002 was reassigned to work in the far east, but returned to Canadian flag as Atlantic Superior in early 2003. In January 2006 it had an engine cylinder failure off Halifax and limped into port on 5 cylinders, and transferred its aggregate cargo to fleet mate Atlantic Erie. It then entered drydock at Halifax Shipyard after which it was reflagged to the Bahamas again.

It was brought back to Canadian registry in 2010 (registered in Montreal) and in 2011 began the Pointe-Noire shuttle service in Sept-Iles bay, running iron ore out to larger ships at anchor.
It arrived on Halifax again in January 2012 for drydocking and winter layup, and returned in December of the same year and spent the winter at pier 25-26 where its self-unloading system was overhauled. 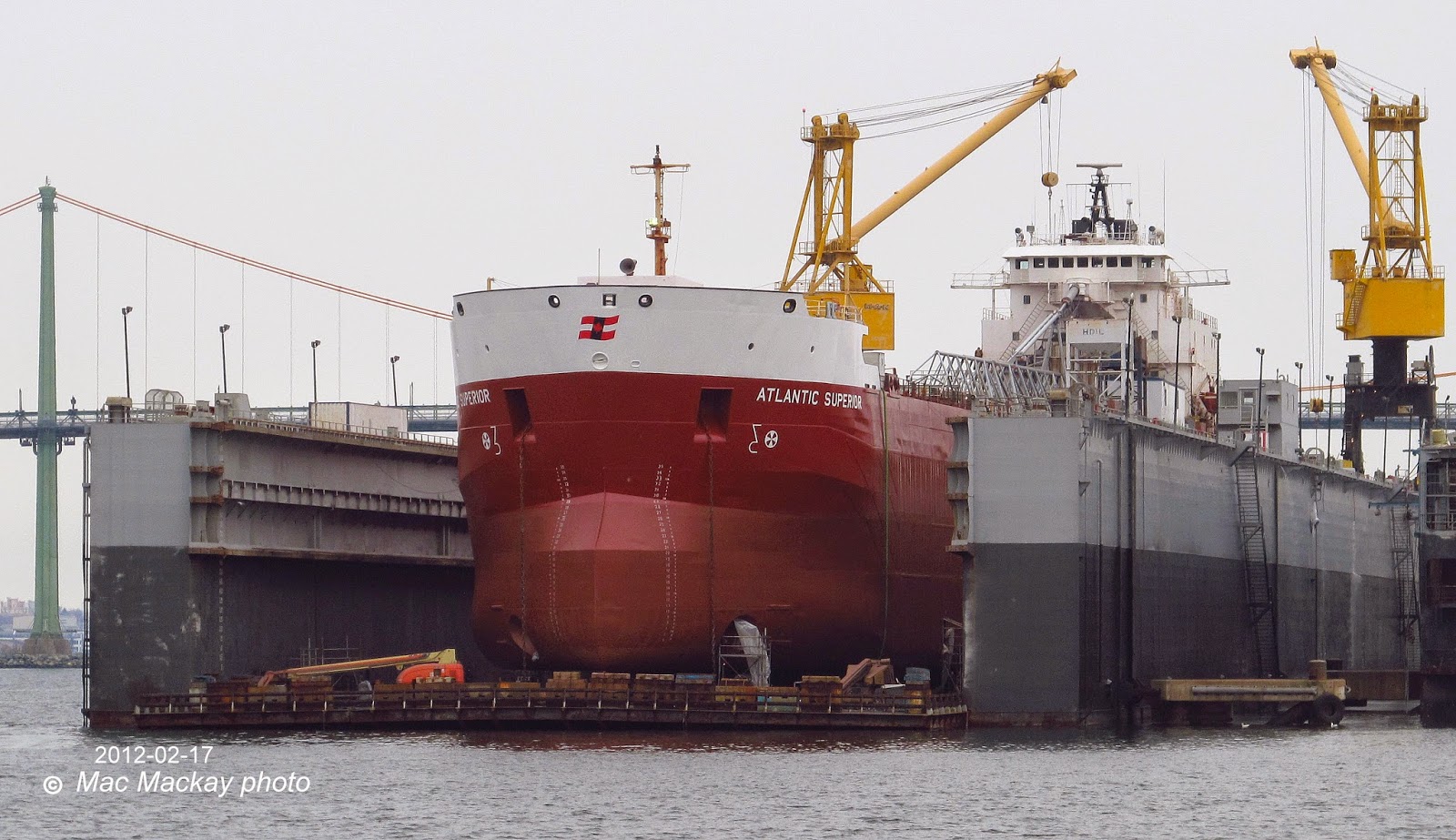 Atlantic Superior received a major refit at Halifax in 2012, and now sported a CSL red hull. CSL self-unloaders had traditionally been black because of their coal cargoes.

The ship had also received the new domestic CSL funnel mark, with the white stripe turning down the after side of the stack, and again had the Canada Steamship Lines banner on its flanks.

March 19, 2013, my last photos of Atlantic Superior. Due to decreased demand for gypsum in the US, the ship rarely loaded to deepest draft.

On September 17, 2013 it was again transferred to Bahamas flag and returned to the BC coast running aggregates south to the US.

Following on the delivery of the last of the new Trillium class self-unloaders from China, Atlantic Superior set out for China and arrived in Xinhui March 16 for scrap.