Since the Coast Guard's icebreakers were transferred to St.John's, the arrival of such a ship in Halifax is always a welcome break from the routine harbour movements. However at the height of ice season, when the ship is desperately needed in the Strait of Belle Ilse, one has to wonder what it is doing here.

CCGS Henry Larsen after a time in number 2 anchorage, proceeded to the DFO pier at the Bedford Institute. 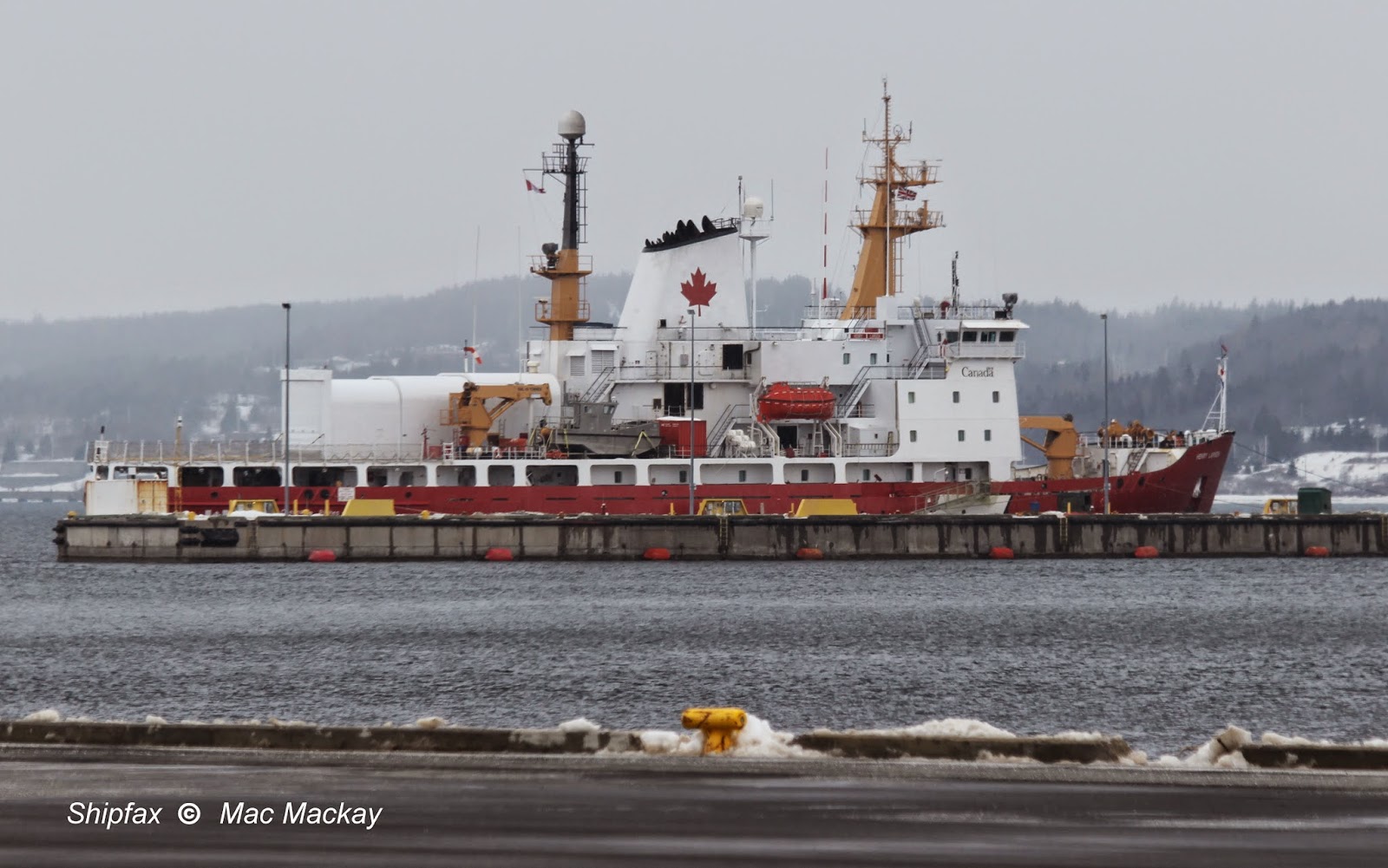 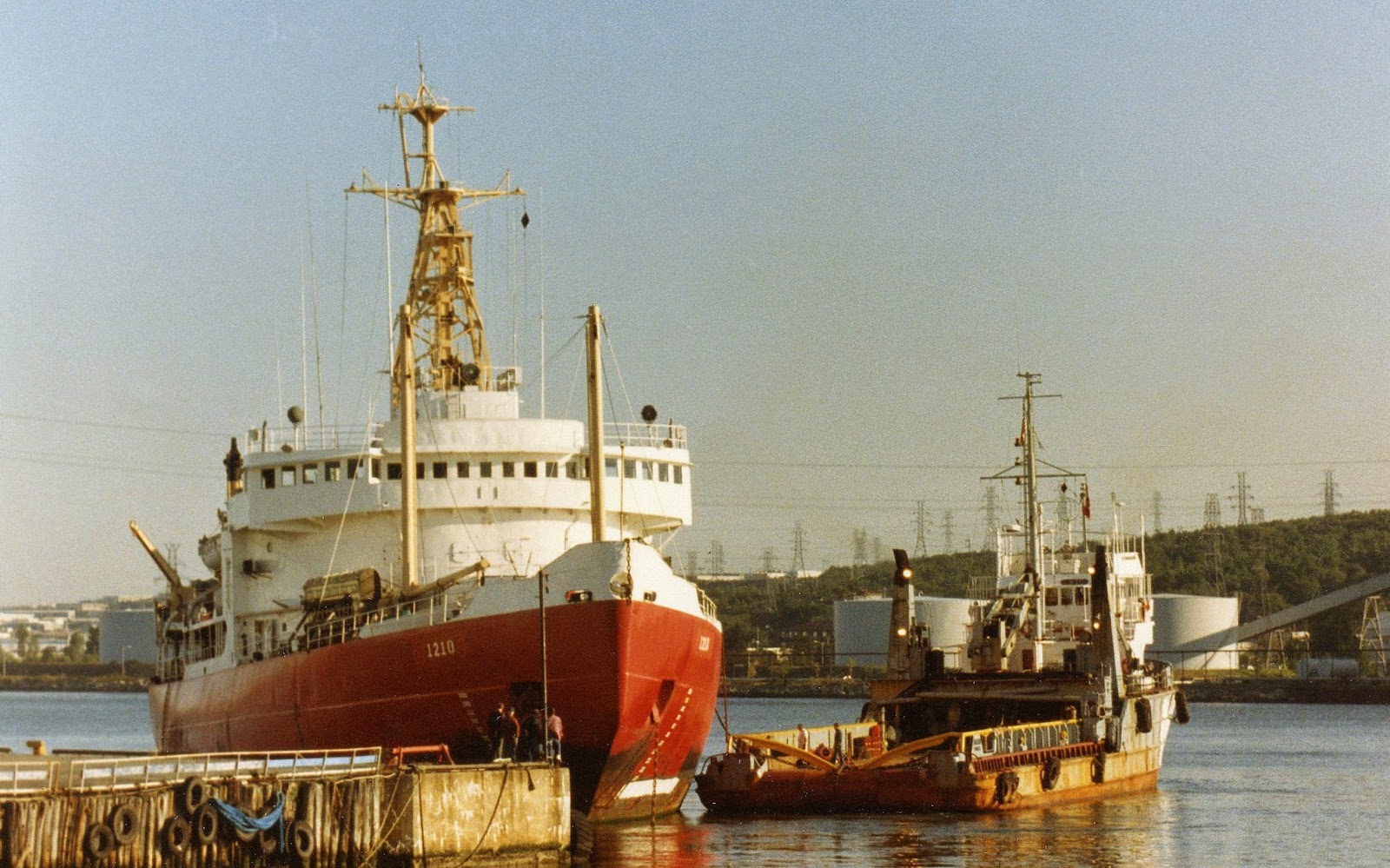 The Larsen was built by the Versatile Pacific shipyard in North Vancouver in 1987. Versatile was acquiring a number of shipyards on both coasts, (Burrard in Esquimalt and North Vancouver; Vickers and Davie on the St.Lawrence). However the company became overextended in many of its business areas (farm machinery, etc.,)  Banks called the company's loans in September 1986 and it was trying to absorb losses from Davie's construction of Caribou.(under previous yard owners Dome Petroleum). They were hoping to get the Tribal destroyer contract (TRUMP) for the Quebec yards and the Polar 8 icebreaker for the BC yards, but they were exceedingly cash strapped when they launched the Henry Larsen January 3, 1987.
Versatile had also hoped to purchase the MIL yard in Sorel-Tracy and thus get part of the Canadian Patrol Frigate program then under way.  However, due to their financial situation, Versatile was forced out of Quebec when MIL instead took over Versatile Vickers and Versatile Davie, also in January 1987. Upon which the newly minted MIL Davie got the contract to build the ferry Joseph and Clara Smallwood. They also eventually got the TRUMP work too. (MIL closed Vickers as part of the same re-organization.)

Delivery of the $97mn Henry Larsen was to be in July of 1987, but Versatile Pacific "held" the ship until the promised award of the Polar 8 icebreaker and the cash from the sale of Vickers and Davie to MIL.

By December 1987 some of the cash was flowing and Versatile Pacific was at work on design for the Polar 8. Henry Larsen was supposedly ready for delivery when it was found that there were defective power transformers which had to be replaced by the supplier, delaying delivery until mid-1988. It has been a widely held opinion that knowledge of the defective transformers was withheld as part of the "ransom" plan to get the Polar 8. [Note: see the comment below - this is purely a conspiracy theory and has no credence.]

However things did not work out and the Polar 8 was cancelled in 1992. Its value was to have been $347mn (plus) or 3 times that of the Larsen. Versatile Pacific Shipyards then went in bankruptcy.
The Esquimalt assets went to Victoria Shipyards (now Seaspan Marine). Some of the North Vancouver assets went to Vancouver Drydock, and the rest is now a retail / entertainment / park with some restored cranes and other features. 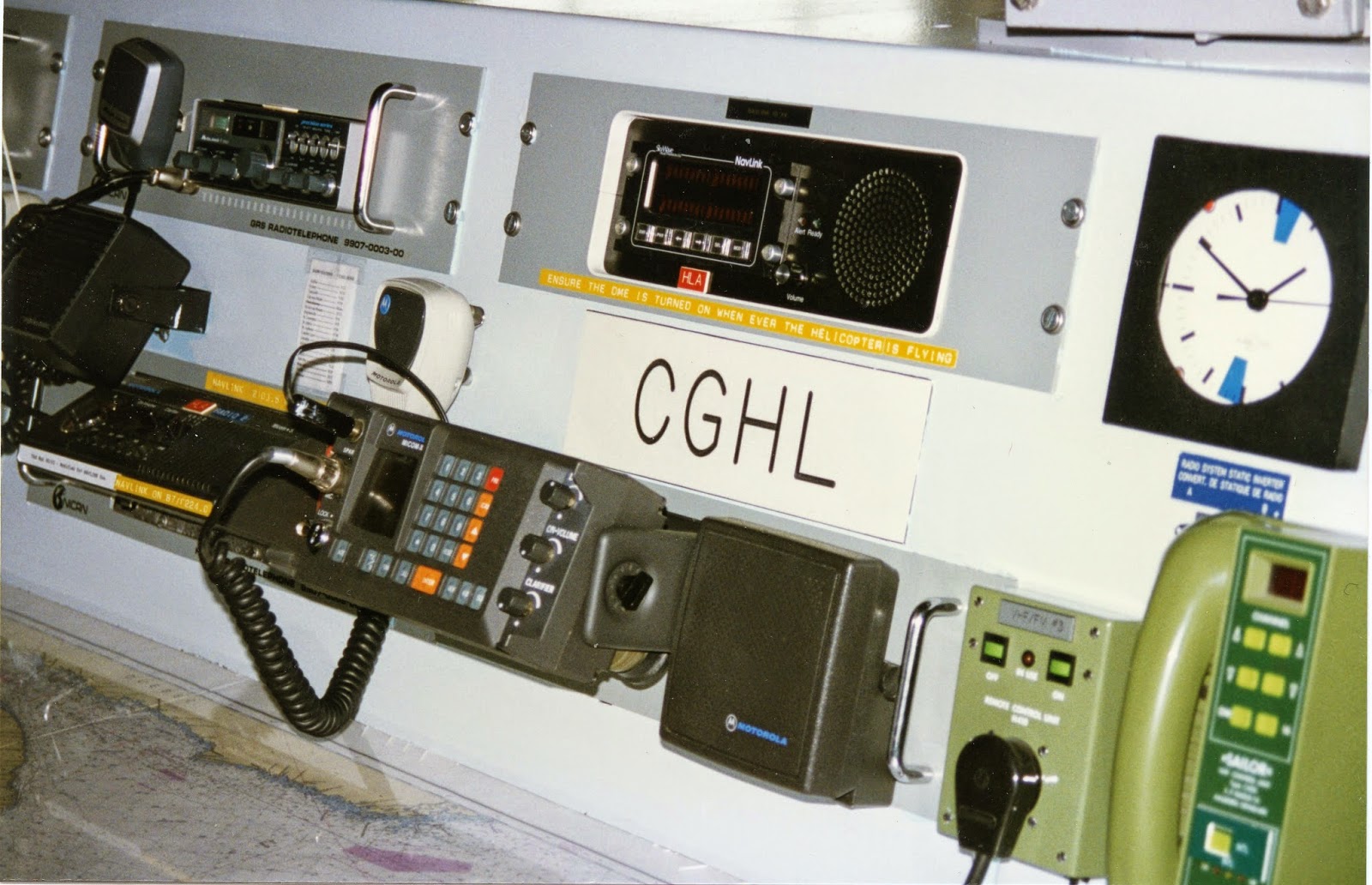 Henry Larsen last received a major refit in 2000 and is now scheduled for a drydocking and Vessel Life Extension starting in April and will be out of service for a year. It will get another big refit in 2018. That should extend its life into the 2020s. Even assuming delivery of the new CCGS John G. Diefenbaker, and (replacing CCGS Louis S. St-Laurent) sometime in 2020-2021, Henry Larsen will remain Canada's newest icebreaker for at least five years but possibly more.