The first stern trawler built in Canada was launched at Halifax Shipyard March 18, 1965 according to the Halifax newspapers. However, in fact Bathurst Marine was building stern trawlers from 1962. No correction was made in the newspaper, but I am correcting this post. Thanks to a correspondent for bringing this to my attention.


The launch took place without the customary champagne ceremony. The bubbly was placed in reserve until June 5 when the vessel was completed and handed over to its owners. Mrs. Karl Karlsen, wife of the owner of Karlsen Shipping and more specifically M.V. Tem Ltd, the nominal owner, christened the trawler Brandal.

Brandal was originally delivered in white paint. Here it is fitting out for the 1967 seal hunt, as a helicopter pad is installed on its deck.
[Apologies for a 1967 photo taken on 127 film, but it is the only photo I have of Brandal in white.]

Stern trawlers were more efficient and safer than the traditional side trawlers because they could keep their head up to the seas and thus keep a dry deck. The deck crew could be more productive and many of the dangerous wires were clear of the working area. 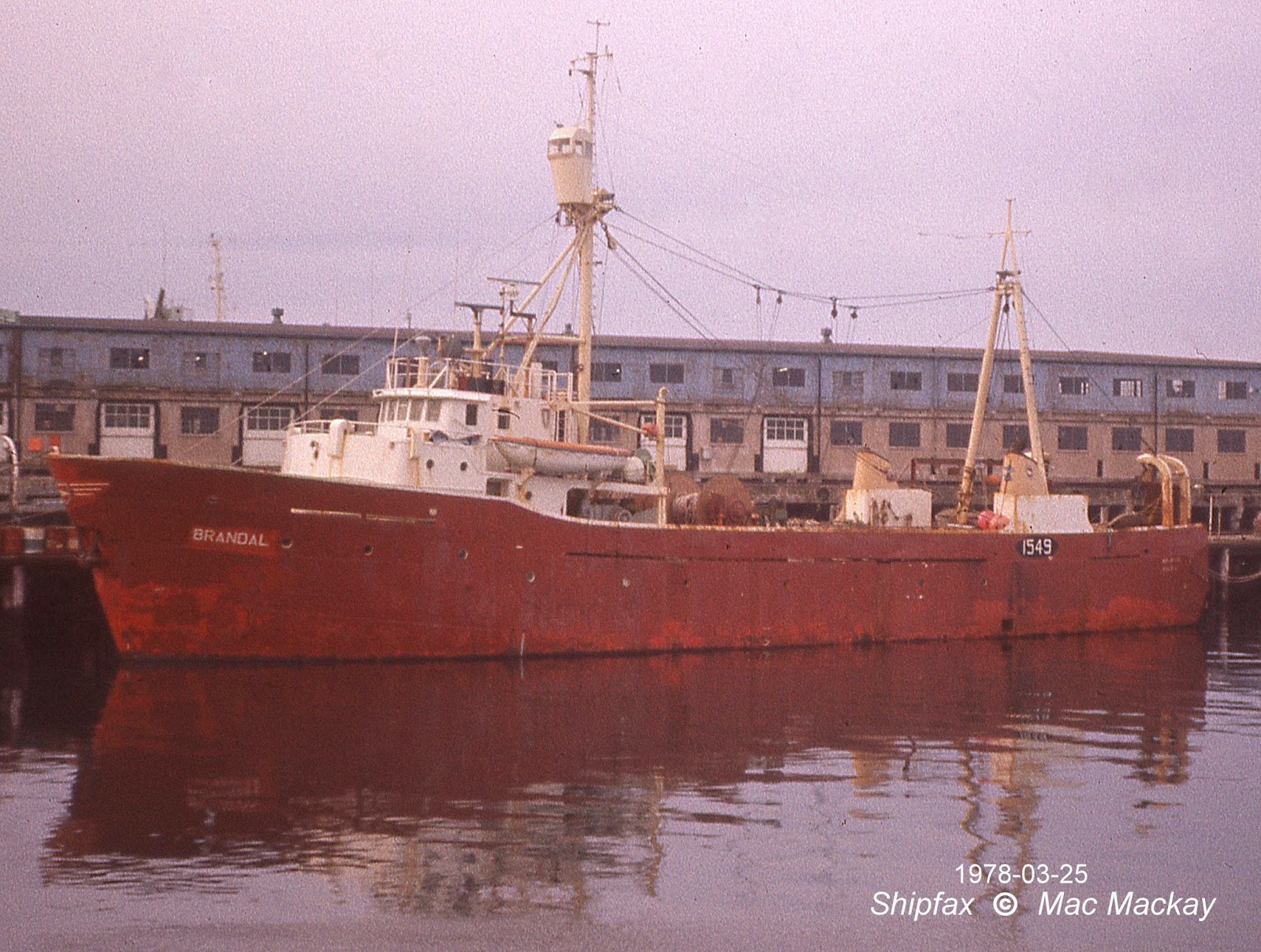 Brandal was a bit of a prototype for a small run of similar vessels, but it was also a unique vessel to suit the owners' particular needs. Karlsen Shipping, associated with a parent company in Norway, was involved in fishing, sealing and whaling, but also found work for their ships in the off seasons by doing research and oil exploration. While Brandal was fitted out for fishing, it was also equipped with a crow's next, and was reinforced for working in ice.

Brandal is the name of a small village in northern Norway, noted as the ancestral home to the Norwegian seal hunt, both in the White sea, and off Newfoundland. Brandal is also a family name, and at least one of Karlsens skippers was a Brandal. Brandal was also the home of Karl Karlsen, patriarch of the Norwegian and Canadian companies,  later based in nearby Aalesund, Norway.
The Canadian company, Karlsen Shipping, had a plant at New Harbour on the Blandford Peninsula, southwest of Hailfax, and a building and pier in Halfax.

In the summer of 1966 Brandal was sent to the Great Lakes for hydrographic research. On return it may have refitted for fishing, but in the spring of 1967 it was fitted with a helicopter deck and set out on the annual seal hunt. In the summer of 1967 it was sent back to the Great Lakes for more research.
In 1968 it concentrated on fishing and did not participate in the seal hunt.

In 1973 it was a support vessel for Shell Oil's exploration program and worked as a supplier for the drill rig Sedneth I. 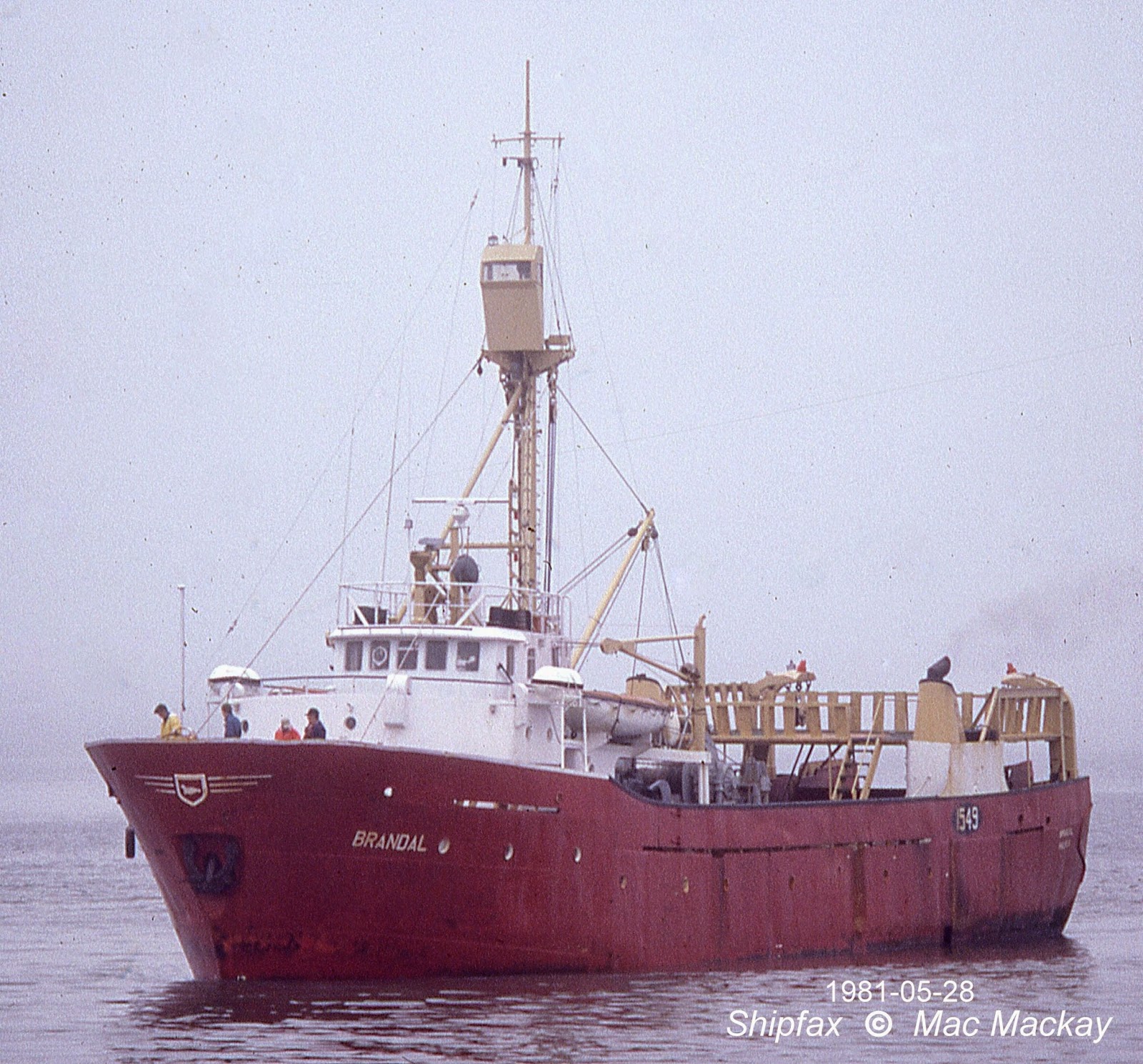 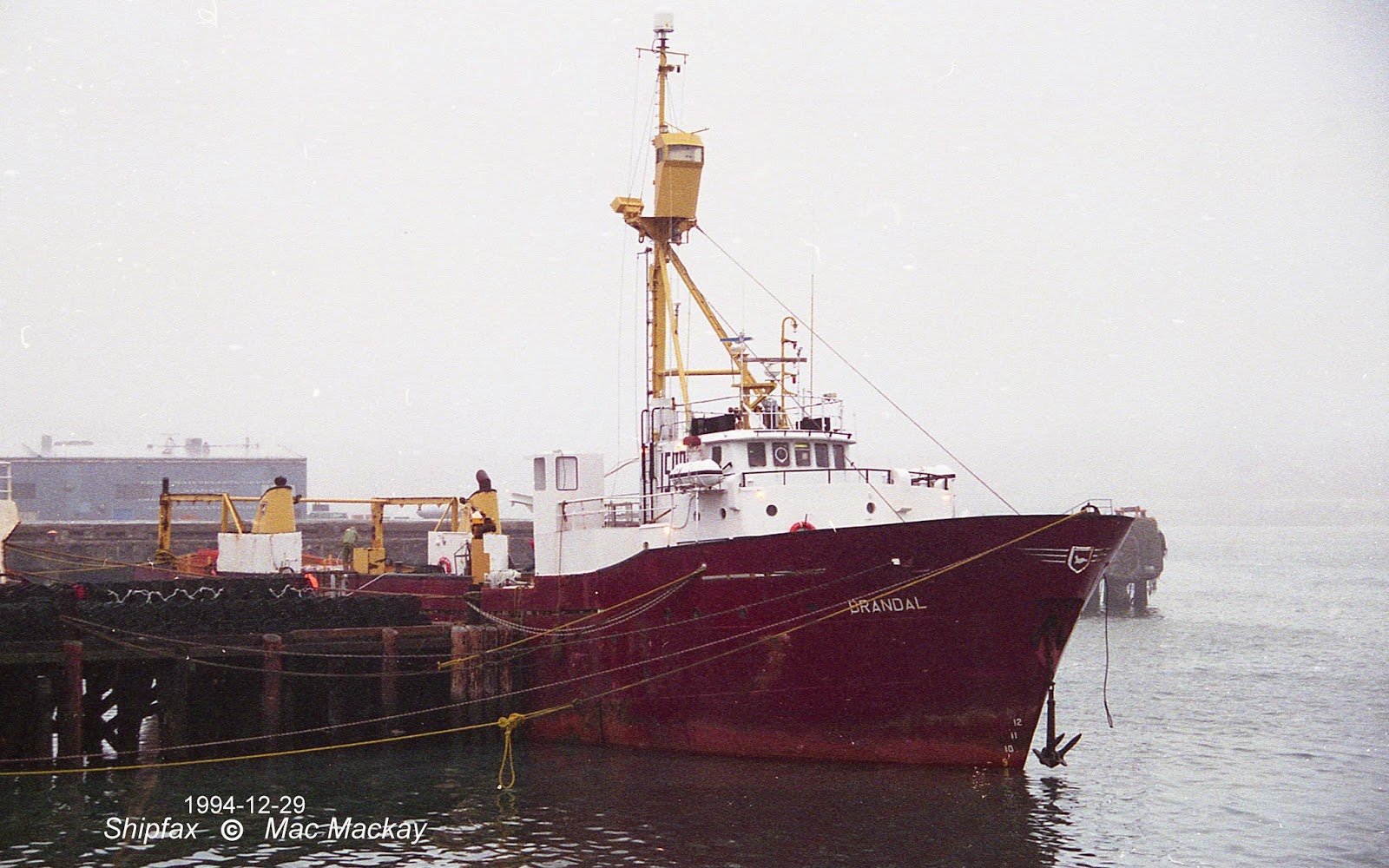 Later the after bipod mast was removed, and it acquired several derrick and a platform built above the stern ramp. It retained the crow's nest and polar bear crest on the bow. Preparing to sail as Granchio the deck is filled with crab traps.

Over the subsequent years it did less and less fishing and was often unemployed for long periods.
Finally in 1995 it was fitted for crabbing and renamed Granchio. (Italian for crab, but also slang for mistake) but was laid up in Bridgewater, NS, under the Barbados flag.
In 2001 it was sold to new owners in Namibia. The delivery trip was interrupted when the ship was arrested in Bermuda. Thew same owner bought it back at a sheriff's sale but ran out of food and water 700 miles short of its destination. Finally after paying in advance for a tug, the owner delivered the boat to the port of Luderitz, Namibia.
No record of the boat being laid up or scrapped has reached me, but that is more than likely after all this time.

The Karlsen's shipowning company m/v Tem Ltd was named for the veteran side trawler Tem. 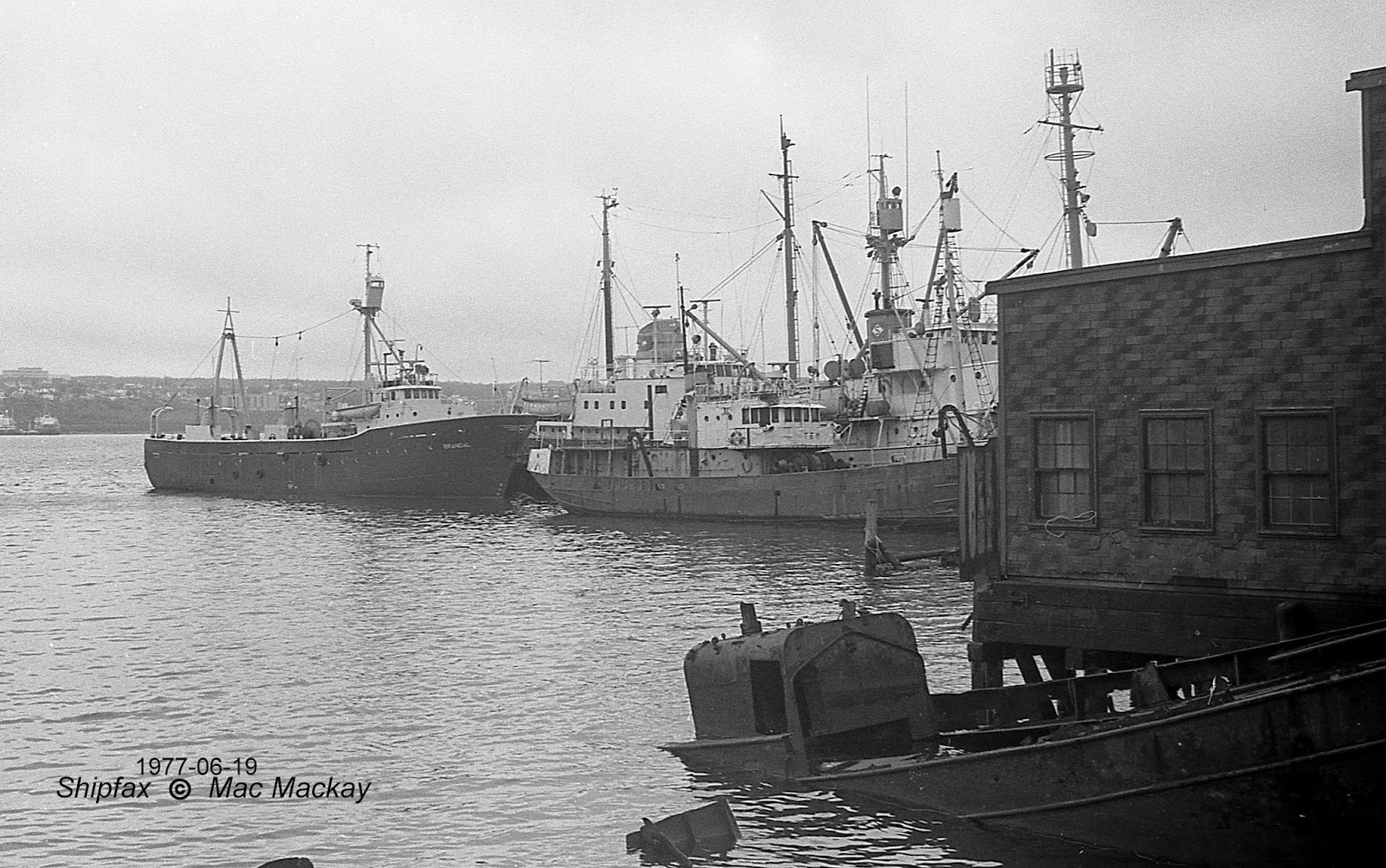 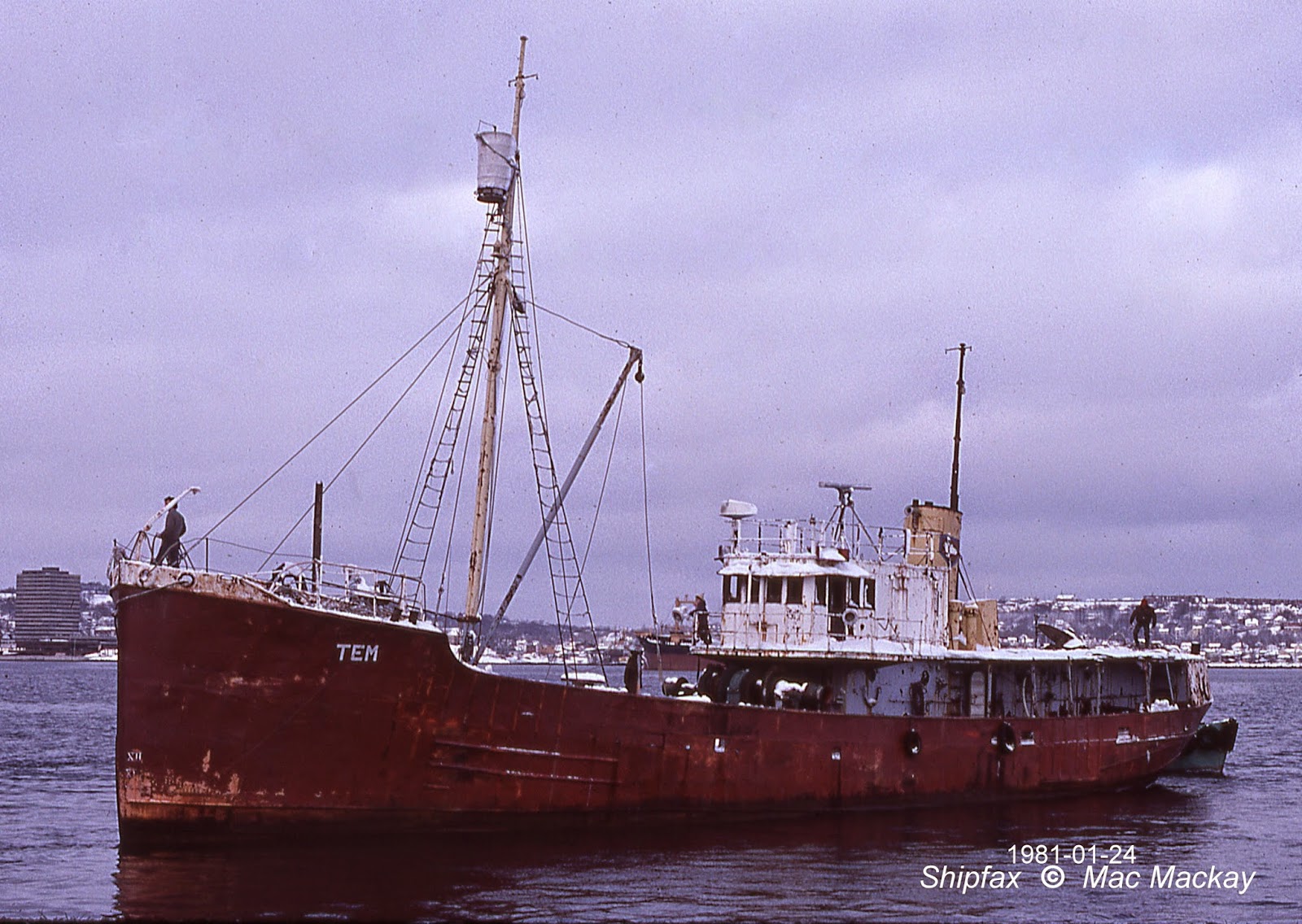 The old Tem was originally a trawler, but also became a sealer with Karlsens. It's canvas crow's nest must have been a pleasant spot.


It was built in 1931 by Bath Iron Works in Bath, ME as Illinois for General Seafoods.Booth Fisheries [thanks to another reader for pointing out this error]. In 1940 it was requisitioned by the US Navy, renamed USNS Albatross and given pennant number AM-71 to 1944 and IX-171 until 1945, when it was returned to its owners.

The Canadian subsidiary of the Norwegian company A/S Thor Dahl, Christensen Canadian Enterprises, bought the trawler in 1948 and registered it in St.John's, NL and placed it under the management of Karlsen Shipping of Halifax. It went out on the 1949 seal hunt, still carrying the name Illinois, but was renamed Tem later in the year, and registration moved to Halifax.

On its way to the scrappers in 1981 Tem had been damaged by a small fire in the wheelhouse.

In 1957 the company M/V Tem Ltd was formed and became owner of the ship. It continued fishing, sealing, research and even some whaling,  but by the 1970s it was largely idled. A wheelhouse fire in 1979 finally prompted Karlsen to sell the ship to a local scrapper. 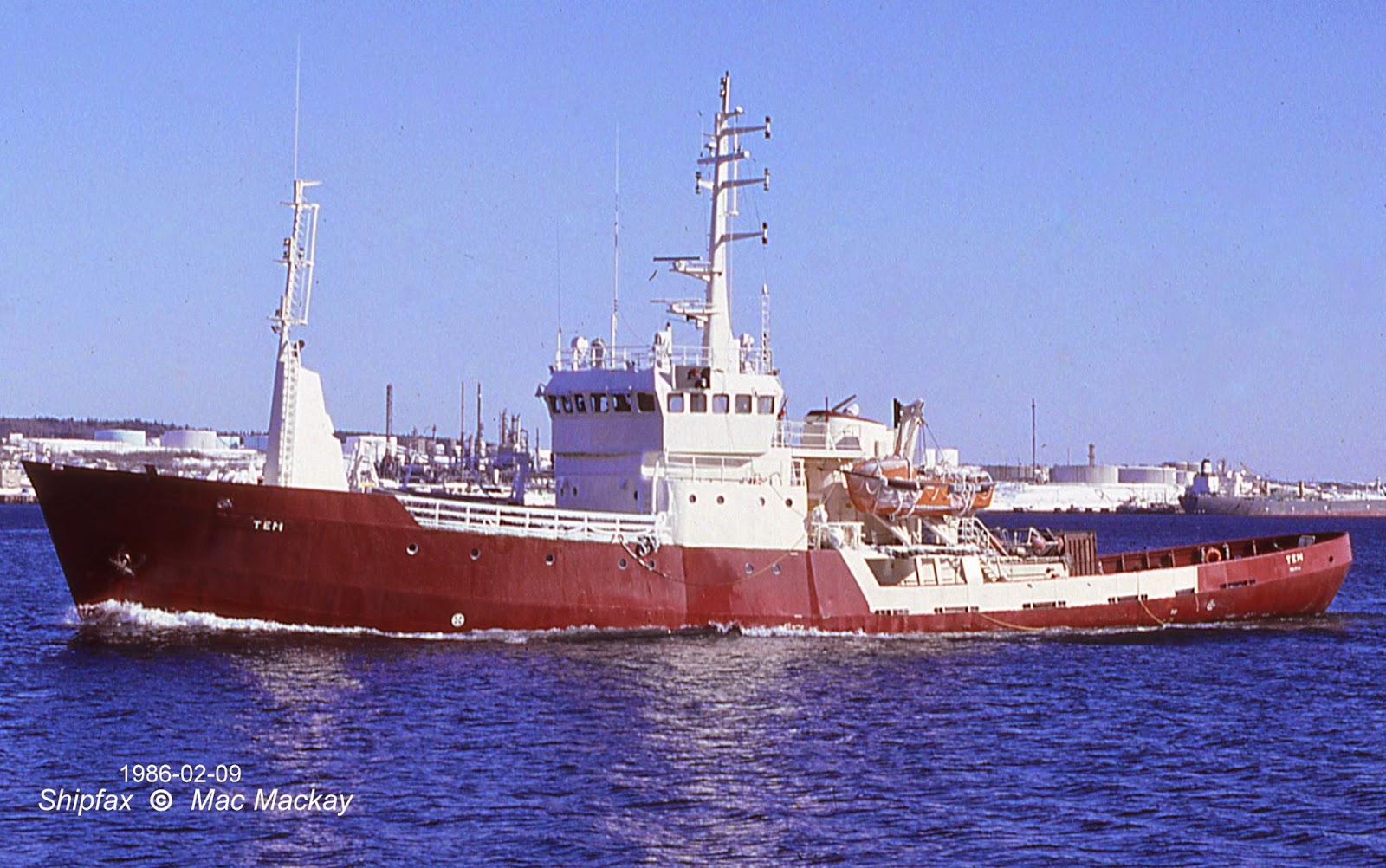 The new Tem had the graceful lines of a whaler.

There was another Tem in the Karlsen fleet. It took that name in 1984 when they renamed their standby and rescue vessel Rescue K. It was built in 1957 by Haarlemsche Scheepswerft Maats. as the whaler R4. That was a short lived occupation and in 1966 it was converted to a patrol ship named Senja. In 1982 it was reconfigured by K/S Remoy Standby A/S of Norway as an offshore standby vessel named Rescue Kim. Karlsen's acquired the vessel in 1983, and shortened the name to Rescue K.

On March 13, 1985 Tem (ii) took in tow the vessel Meta when it broke down off Beaver Harbour and towed it to Halifax. The 384 grt Meta was built, coincidentally, in 1954 in Trondheim, Norway as Namsos, but had spent from 1969 as Galway Blazer and since 1977 as Meta for the Canadian company Stephenville Shipping Ltd. It seems to have been used for research (it was seen at the Bedford Institute in May 1978), and some cargo/passenger work on the Newfoundland coast. The same copmany had previously owned the former Lady Grenfell posted here: http://shipfax.blogspot.ca/2015/02/nova-scotia-coasters-part-3-lady.html 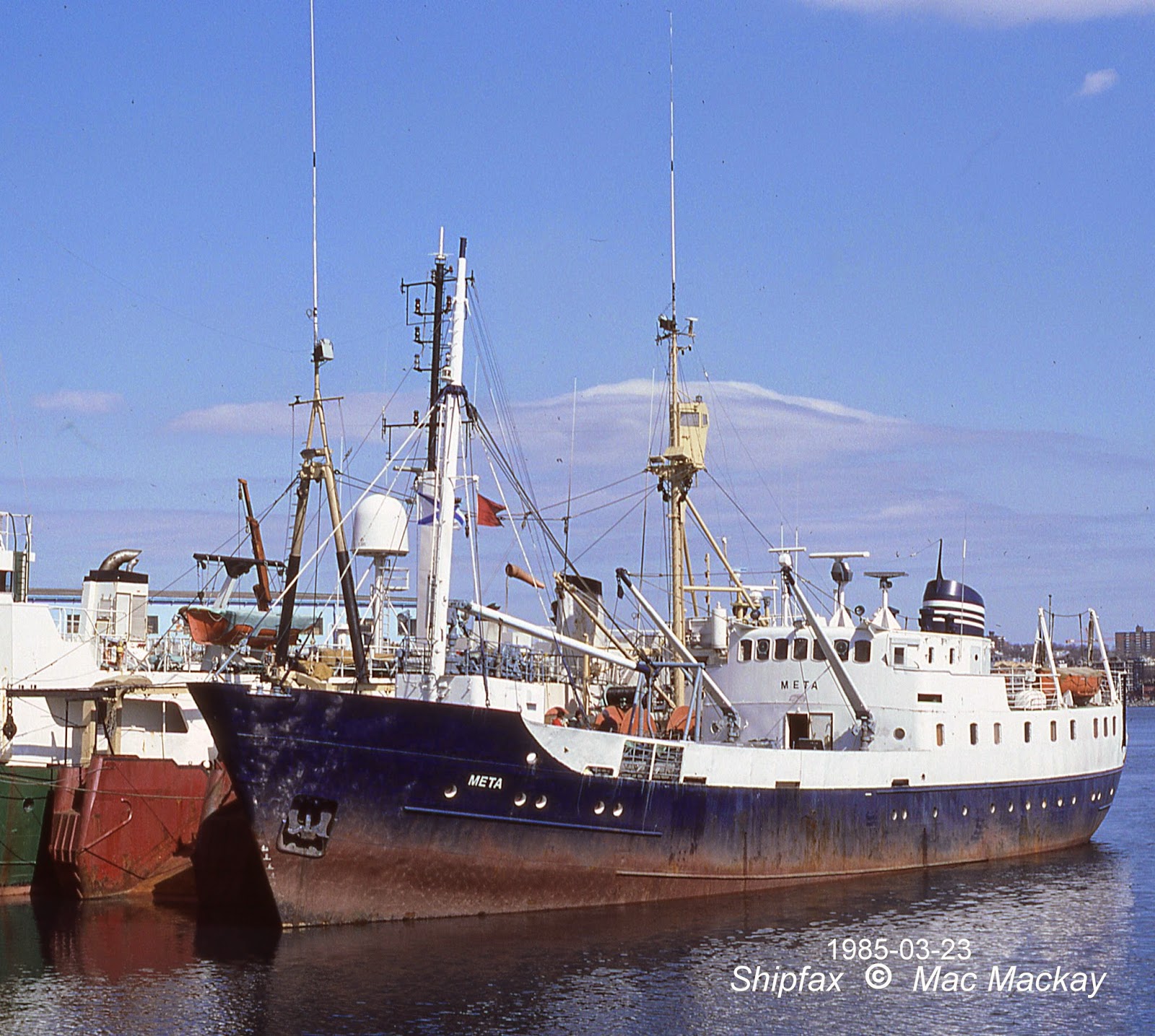 Directly behind Meta is Brandal again, bristling with antennas, a satellite dome and refitted with its after bipod mast. It was doing seismic work.
On arrival in Halifax Meta was soon under arrest and sold to Mission Possible Co Ltd, flagged in the Turks and Caicos Islands, and renamed Sonship 1. In 1989 it became Ebenezar Express under the Honduran flag for Ebenezer Naviera. It is still in service as of June 2014 according to online sources.

Tem continued as a standby boat off Nova Scotia until 1989 when it was chartered out and renamed CAM Vigilant under the British flag and returned to the North Sea. In 1993 it was renamed  St.Lucia and in 1995Viking Standby. In about 2003 it was sold to BUE Viking Ltd but arrived in Grenaa Denmark in September 2004 where it was broken up for scrap. 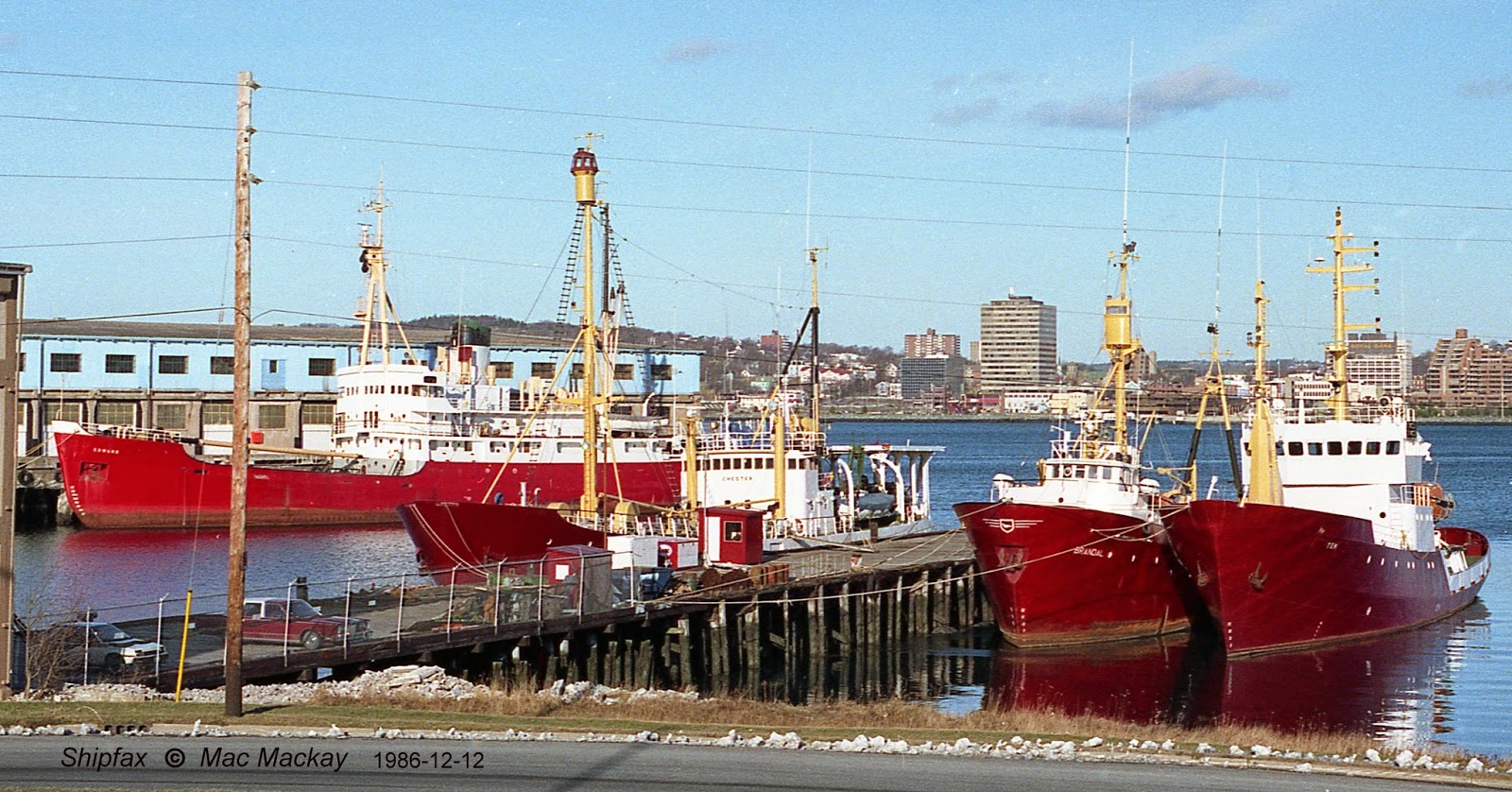 Karlsen's wharf was always a colourful sight. Right to left: Tem (ii), Brandal, and the research / sealer Chester. In the background the former CCGS Edward Cornwallis, renamed Edward. (It was not associated with Karlsen's in any way but was well colour coordinated.)