Taking the pedestrian approach to harbour watching today, a stroll along the boardwalk was rewarding. Despite mountains of snow, the sun was warm and the footing was good.(Getting to and from the waterfront was a different matter-many sidewalks were down to one foot wide).

United Breeze in number one anchorage, with Tosca still at Autoport.

This morning's arrival was the big bulker United Breeze in number one anchorage for bunkers. That accomplished by 1340 hrs or so it made ready to sail, doing a clockwise turn to head outbound. 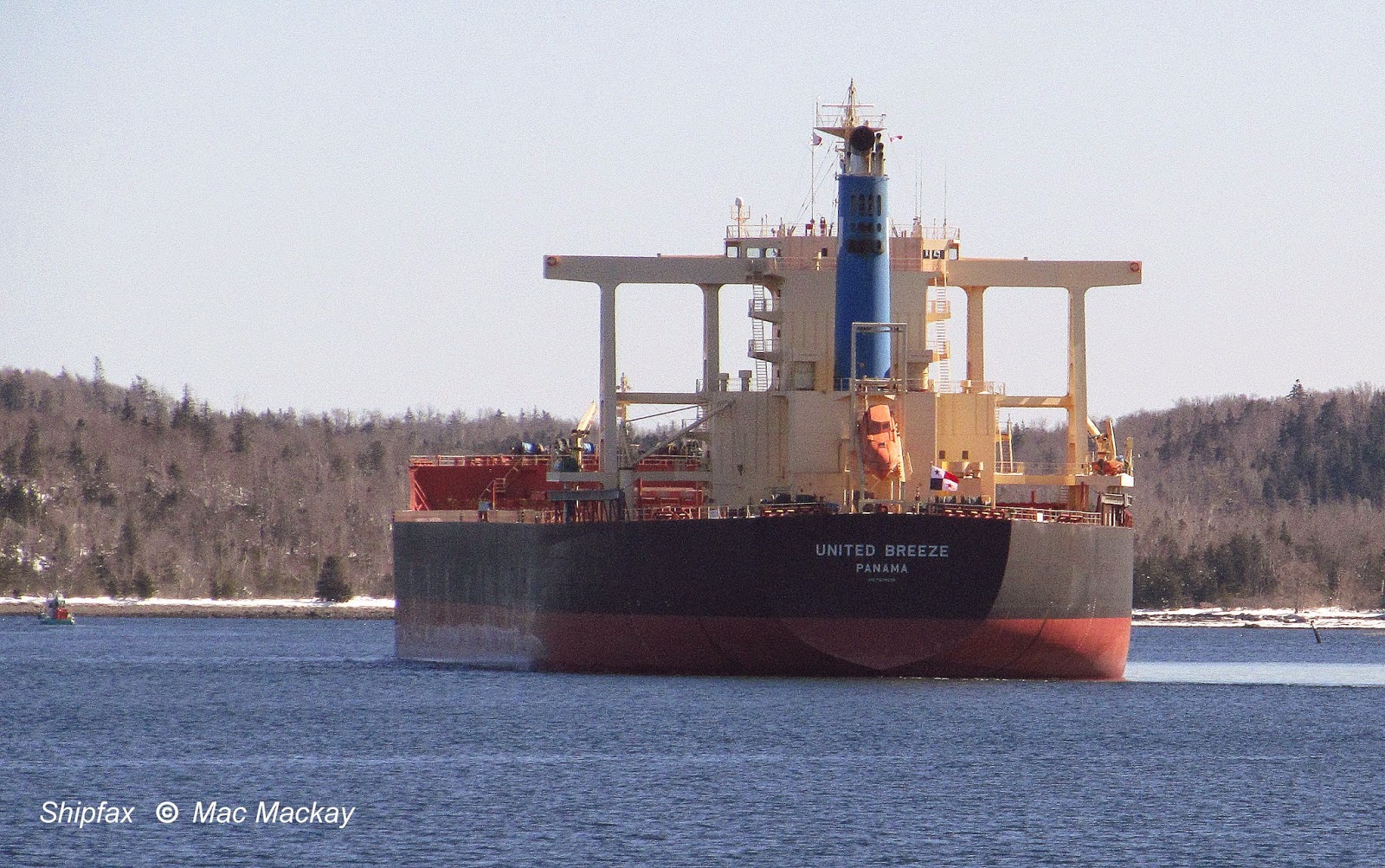 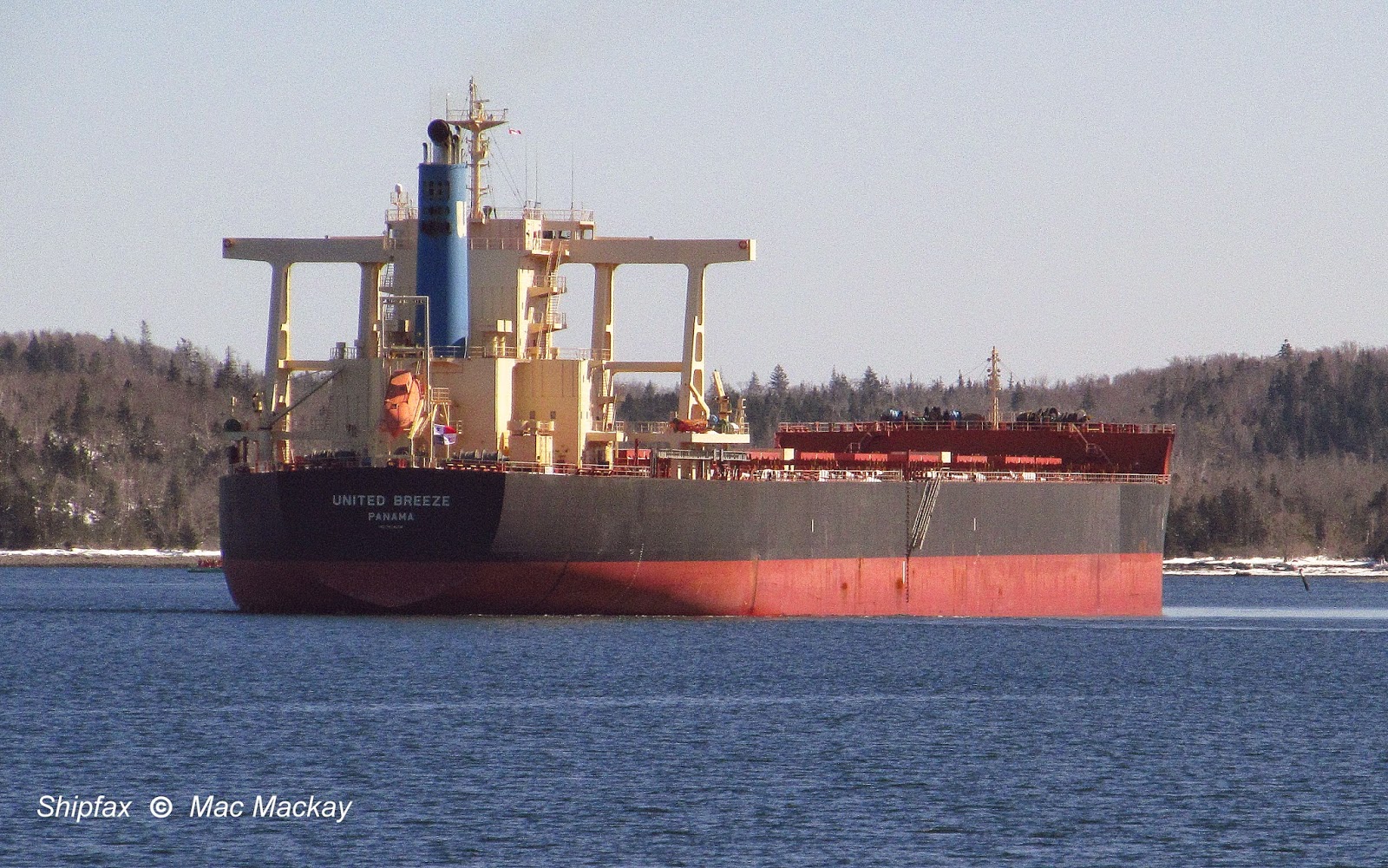 Built in 2012 by Imabari Zosen in Saijo, Japan, the ship measures 92,752 grt, 191,325 dwt. NS United Kaiun Kaisha of Tokyo operates the ship.The ship is operated by NS United K.K. of Tokyo, the company formed in 2010 by the merger of Nippon Steel Shipping and Shinwa K.K. another large carrier. 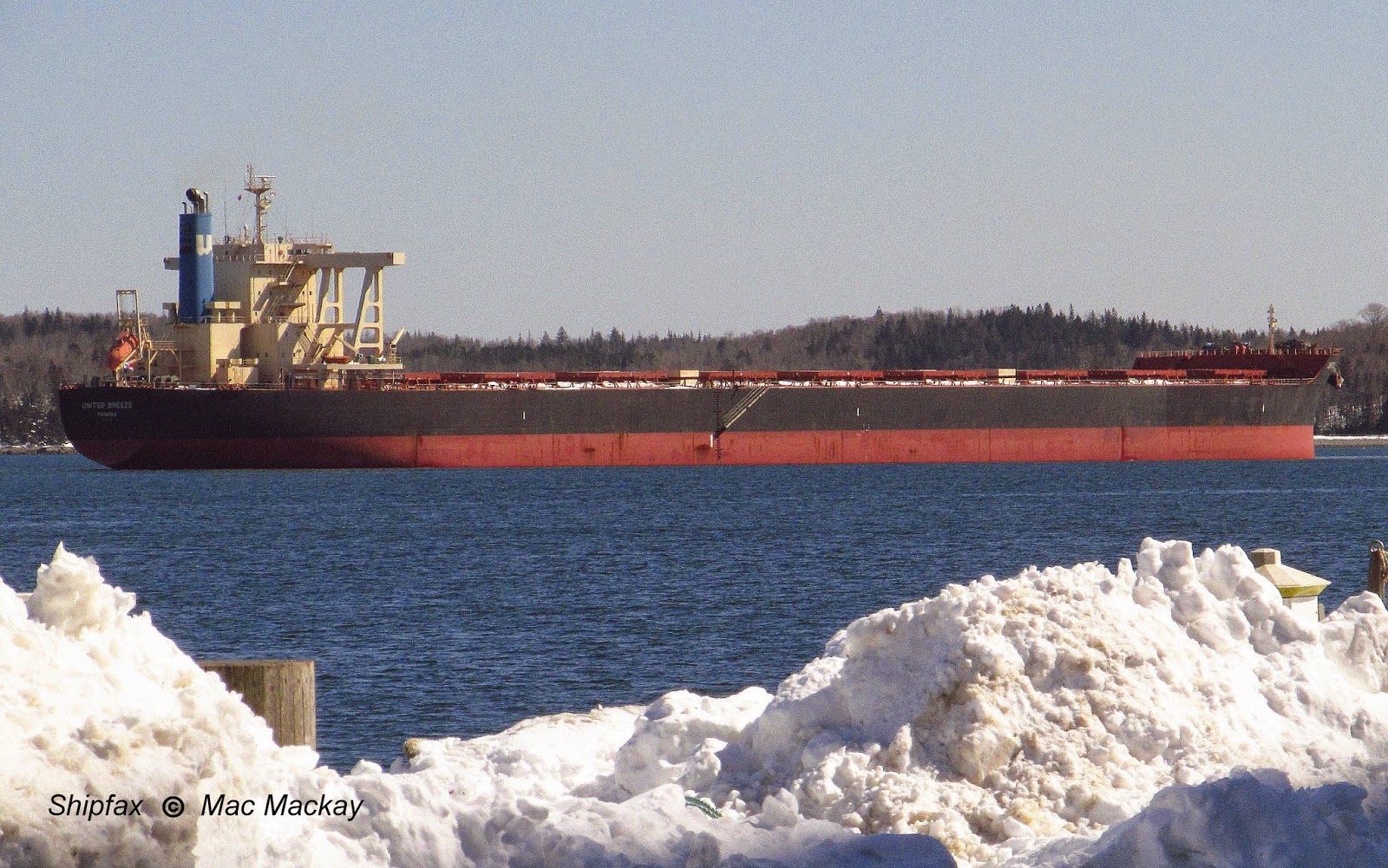 Outbound for the main channel.

The inbound Prisco Irina has exited the western channel and joins the main channel after passing the outbound.
In the foreground the workboat Waterworks I tends its barge at the Tall Ship Quay.

As it was outbound the product tanker Prisco Irina was inbound, timed so that the big ship could take the main channel, and the smaller ship the western channel, making in effect an unusual starboard to starboard meet in the Middle Ground area. The western channel is deeper, but requires the ship to make a dogleg turn. The main channel is a nearly straight run, and therefore easier for the larger ship. 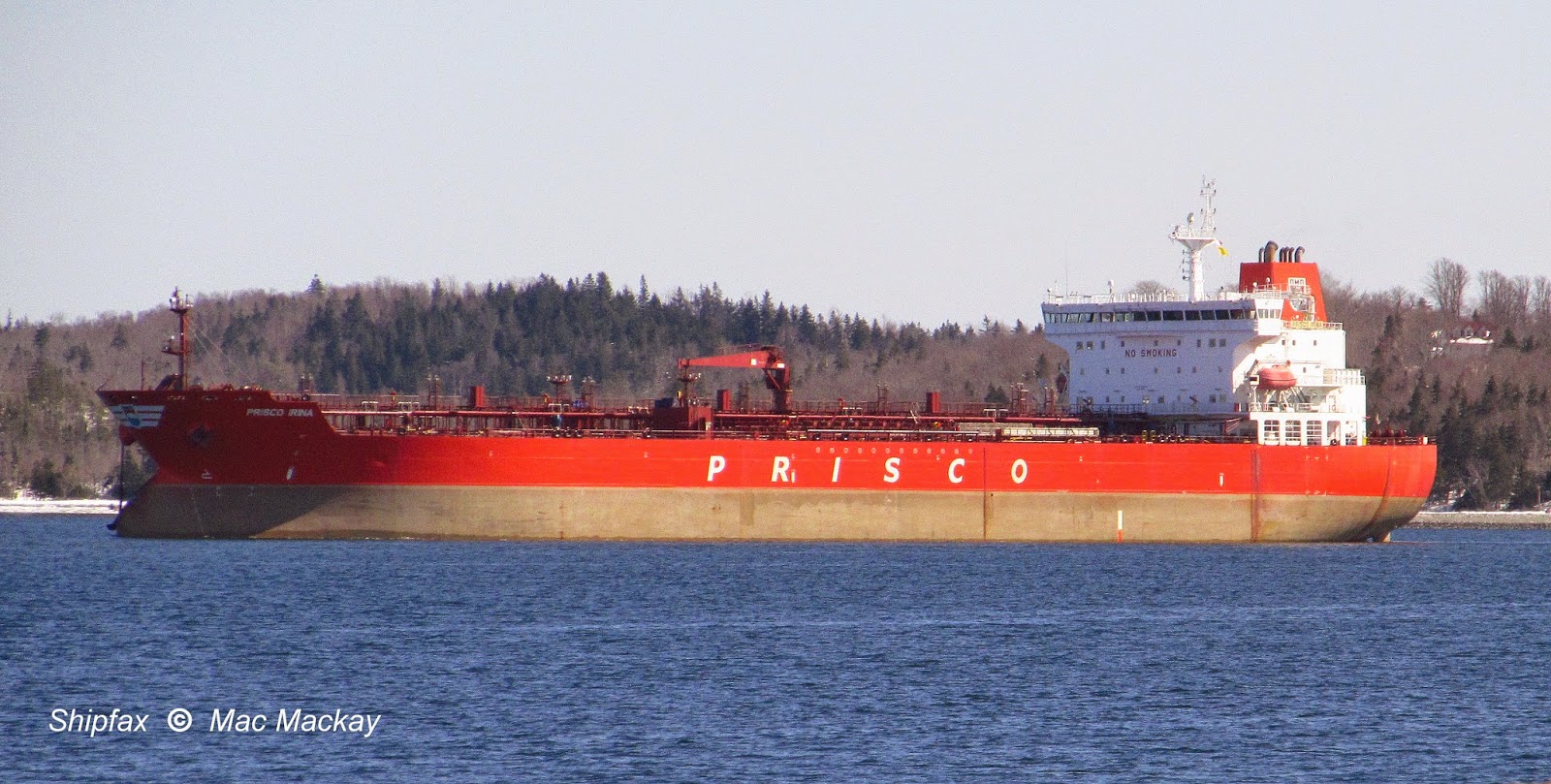 Prisco Irina is another product of STX Corp, Jinhae and measures 29,967 grt, 50,923 dwt. It features the full width bridge of an ice class vessel. It is operated by Prisco Singapore Pte Ltd for Hermine Shipping Ld of Limassol, and flies the Cyprus flag.
For more on Prisco and a detailed spec sheet for the ship see: http://www.prisco.com.sg/our-fleet/

Prisco Irina is headed for Imperial Oil, but will have to wait for tomorrow's departure of Seavictory. 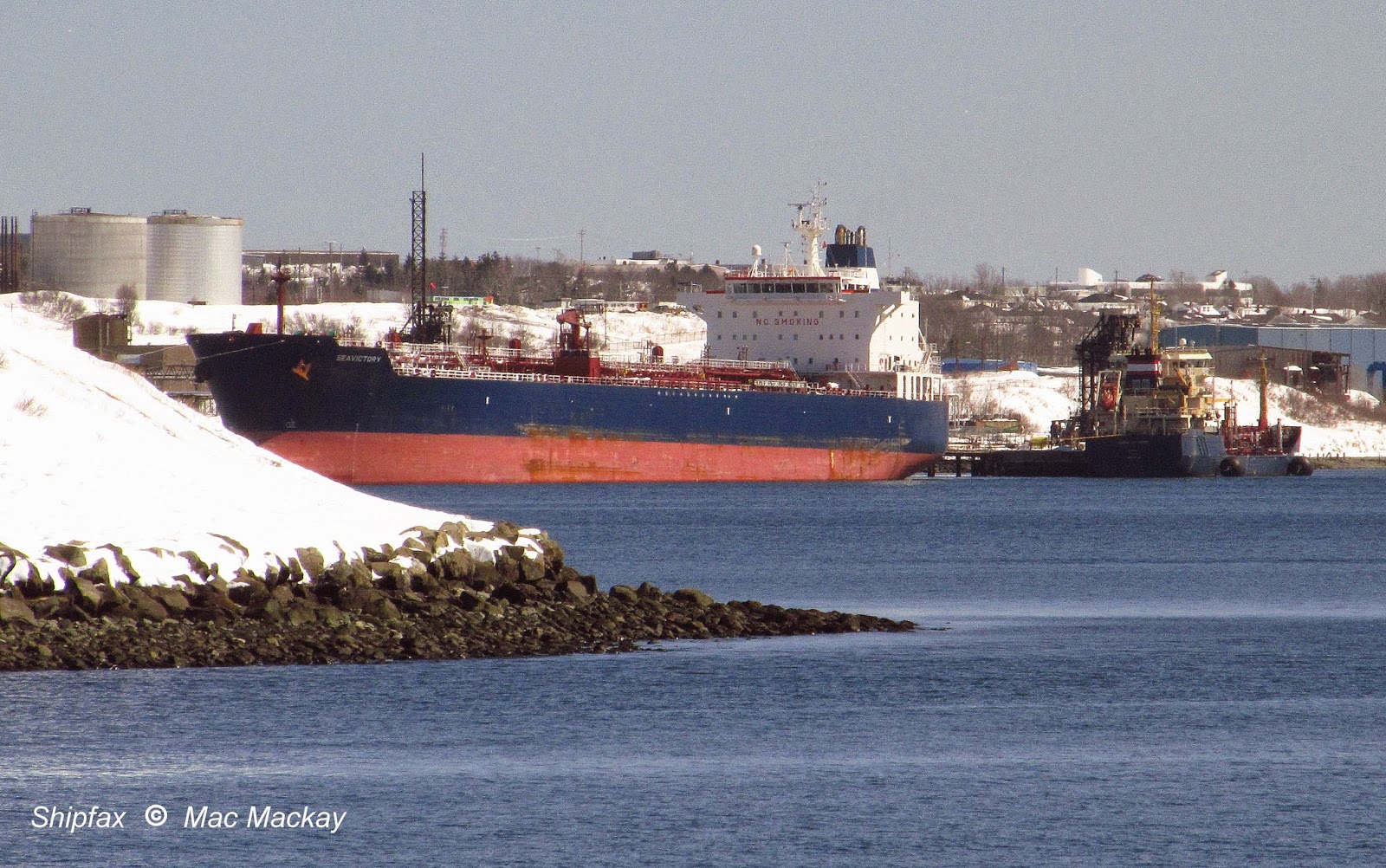 
Updates of previous posts:
Harefield actually did arrive last night and made a stately progression up the harbour at 3 knots. It had two tugs in attendance from the pilot station and was joined by a third tug in the main harbour before entering the Narrows. All this hints at an ice damaged rudder, but I have yet to make it to pier 9c to see for myself.

Redhead is due to sail this evening, indicating that prop repairs were successful. This would mean that the bent blade or blades were straightened by hydraulic press. (Trimming is a last resort) Props are made of malleable/ductile material such as manganese bronze and bend rather than shear off. Good news for ships in ice - they can also be straightened again by specialists such as All-Sea Atlantic Ltd. The company has been active in Halifax for half a dozen years, but their work goes largely unheralded. For some reason shipowners are not keen on publicizing bent props.  More on this another time.

Opal Ace and Tosca As pictured above, Tosca was still at Autoport today, no doubt struggling to unload its cars to clear storage. Opal Ace, which was scheduled for Thursday, March 19, has been pacing back and forth out at sea, and is now due Saturday March 22 after Tosca sails.