As mentioned yesterday Hapag-Loyd announced that it will be selling or scrapping 16 ships. Hapag-Lloyd took delivery of ten 13,000 TEU ship by 2014 and this trend toward megaships has reduced the cost per box to ship freight. Ships are not being scrapped at the rate they are being built, and a world-wide over capacity of smaller and thus uneconomic ships is the result.

Although it is good for the financial health of the industry as a whole to suit capacity to market demands, it does mean that some lines like Hapag-Lloyd and Zim are having to scrap or sell otherwise useful ships, mostly because they are too small. (New environmental regulations and difficult engine conversions are also a factor.)

Paris Express and Kiel Express are of the same class, built by Samsung Shipbuilding + Heavy Industries in Koje, South Korea and delivered in 1991. With tonnages of 53,783 grt, 67,686 dwt and a capacity of 4639 TEU including 452 reefers. they were powered by a 9 cylinder B+W, built under license, which gave a speed of 23 knots.

Kiel Express was built as Hannover Express and called regularly in Halifax starting July 21, 2000. In 2007 it was renamed Kiel express while en route to Halifax and arrived with that name June 19. In 2012 it was reflagged from Germany to Bermuda and management assigned to under Anglo-Eastern Ship Management.

On October 14, 2014 it was loading in Sydney, Australia when a cyclone with 126 kph winds struck the port. The ship parted its lines and struck two other ships including OOCL Hong Kong. All three ships were damaged, and Kiel Express was anchored with many unsecured containers on deck. That damage may have been a factor in the decision to send it to the scrappers.

Paris Express was built as Hamburg Express. It was reported arriving in Guangdong, China towards the end of February. It was also a regular caller in Halifax.

Point Valiant accompanies Paris Express outbound from Bedford Basin off Seaview Point. (How Seaview Point got its name, when there is no view of the sea, is an enduring mystery.)

Atlanta Express built as Ludwigshafen Exppress and Hoechst Express have both been sold to interests associated with Konig + Cie and renamed Dimitrios C and Kalliopi RC under Liberian flag. 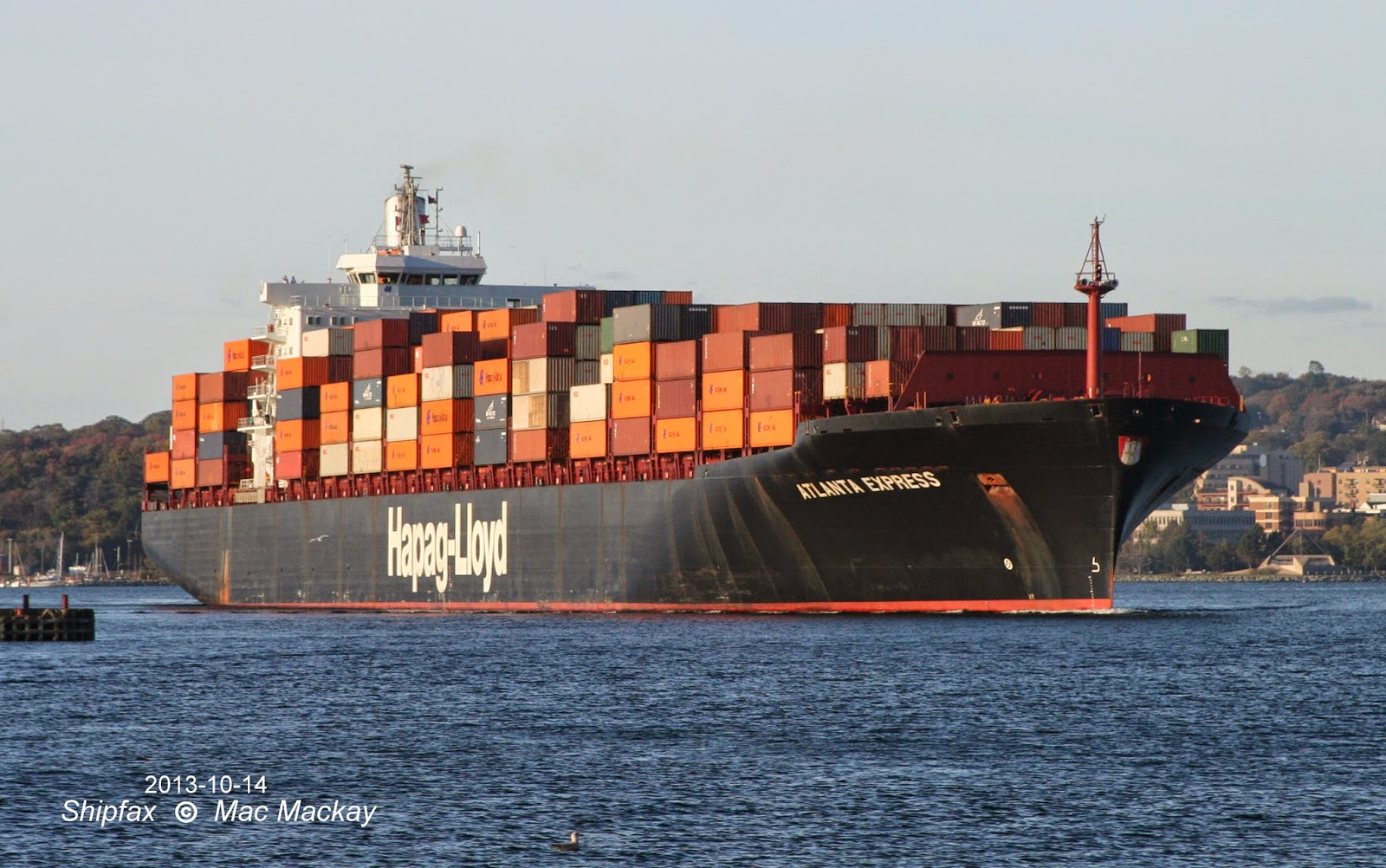 Atlanta Express passes the Svitzer Canada dock, outbound, west of George's Island. Ships of this class had unique wheelhouse, with a "bay window" to the starboard side. 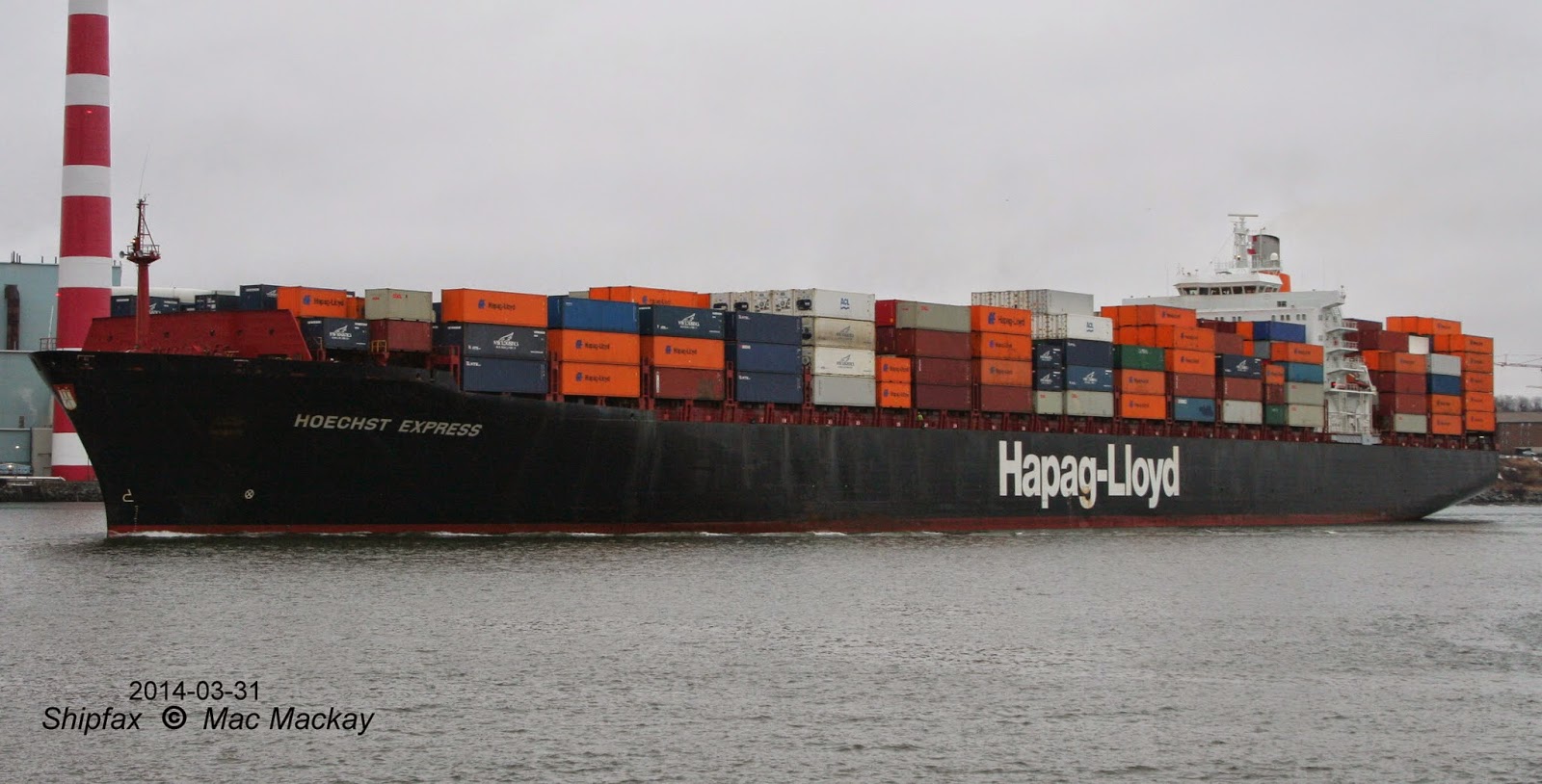 Hoechst Express's most memorable visit to Halifax was in September 2003 when Hurricane Juan struck. The ship parted its lines at Fairview Cove and was adrift for 1 1/2 hours until the tugs Point Halifax and Point Valiant could get it back alongside.


Hapag-Lloyd has ten other ships of the same size range in its fleet of 200 and it seems likely that they will go on the block too.