Maersk made the transition to containers

In the early 1960s they, like most other shipowners, were building large general cargo ships, such as T class from Burmeister+Wain in Copenhagen. 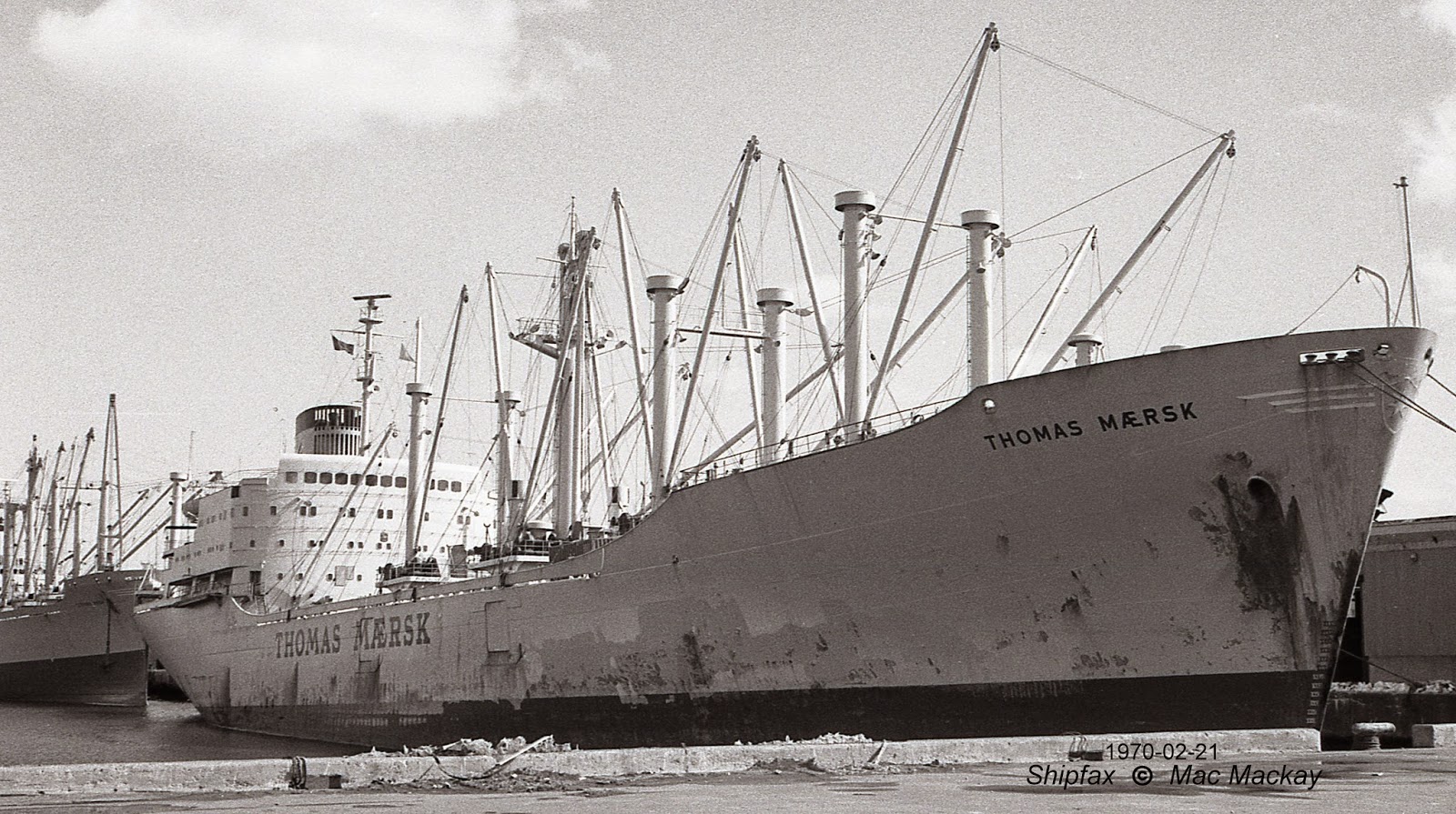 Thomas Maersk was one such ship, of 12,310 grt, 14,390 dwt, dating from 1962. An all purpose carrier, it was strengthened for heavy cargoes, had side tanks for latex, vegetable oil and heated liquids. It also had side doors to load refrigerated cargo. It carried an array of derricks: one 60 ton, one 25 ton, eight 10 ton and twelve 5 ton. Its engine (of 18,900 bhp)  and accommodation were all aft, which was fairly revolutionary at the time.

With the explosive growth of containers, the ship became outmoded and it was sold in 1980 to Panamanian owners, and renamed Sarika B. It only lasted to 1982 when it was delivered to the breakers in Kaohsiung on June 30.

The six strong  C class were built in 1967 to 1969, just before the container era took hold. All-purpose general cargo ships, they were also strengthened for heavy cargoes, had tanks for latex, and vegetable oils, glycerine, etc., and had refrigerated capacity with side loading doors. Their cargo handling gear was slightly more modern, featuring two 5 ton cranes, and with derricks, one 60 ton, one 30 ton, and ten 10 ton. Tonnages were nominally 11,000 grt, 14,150 dwt. Their engines were rated at 20,700 bhp giving a speed of 22.75 knots, which was incredibly fast for a general cargo ship of the era.  They were able to carry 415 containers on deck, if they used all the available space including the hatch covers. 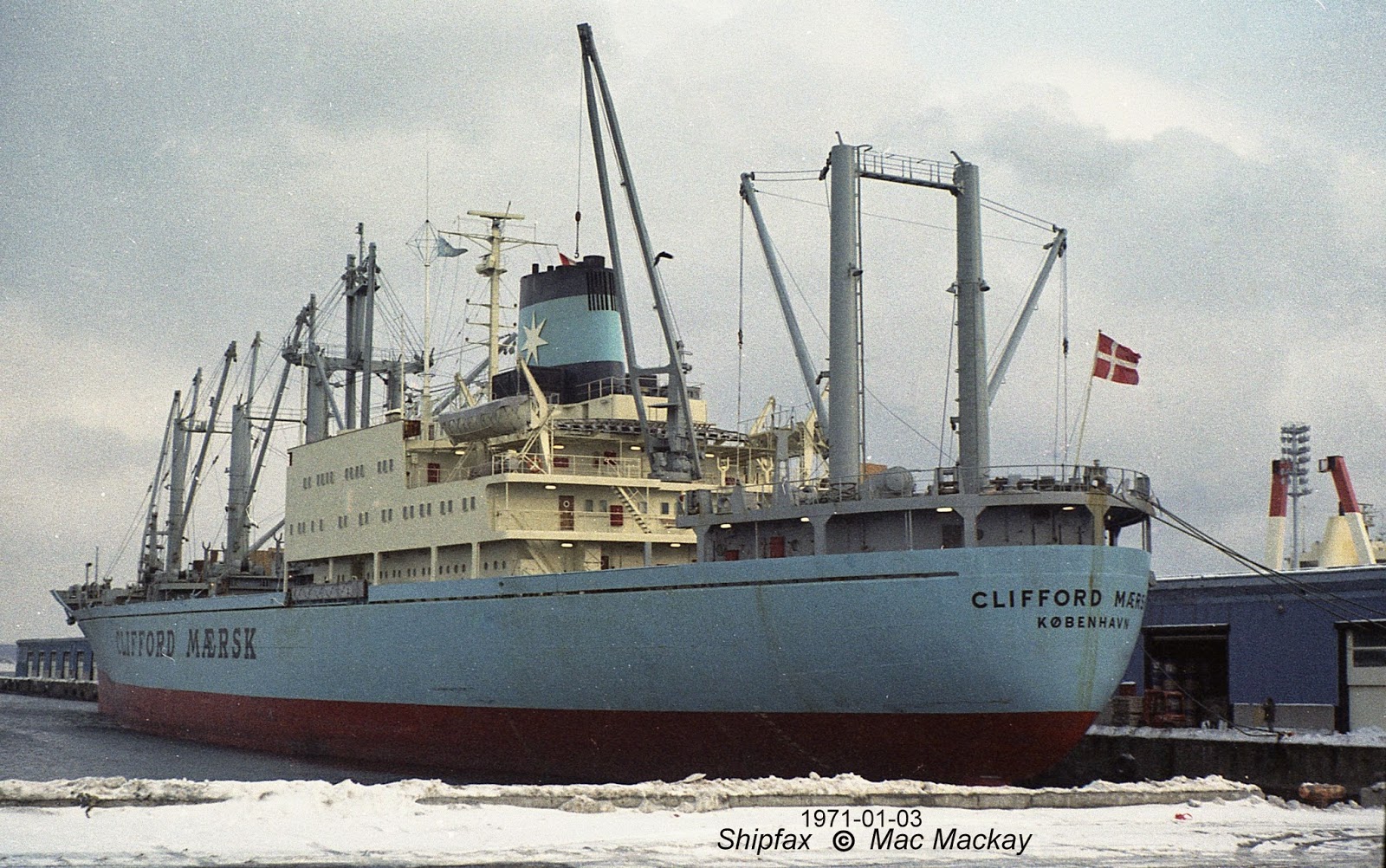 The writing on the wall - Clifford Maersk loading general cargo at pier 36, while in the background crews are assembling the second container crane at Halterm. After receiving its new forebody at Hitachi Sakai in 1980, it became the Chinese Jian He in 1988 and was broken up in Tanjin in 1998.

In 1980, all six ships were sent to shipyards in Japan where new, longer cellular forebodies had been built. Once installed, the resulting ships were container ships of about 21,300 grt, 25,130 dwt with a capacity of 1222 ctrs.
By this time however Maersk was fully committed to the container age, and as new container ships were added to the fleet the Cs were sold to other owners. 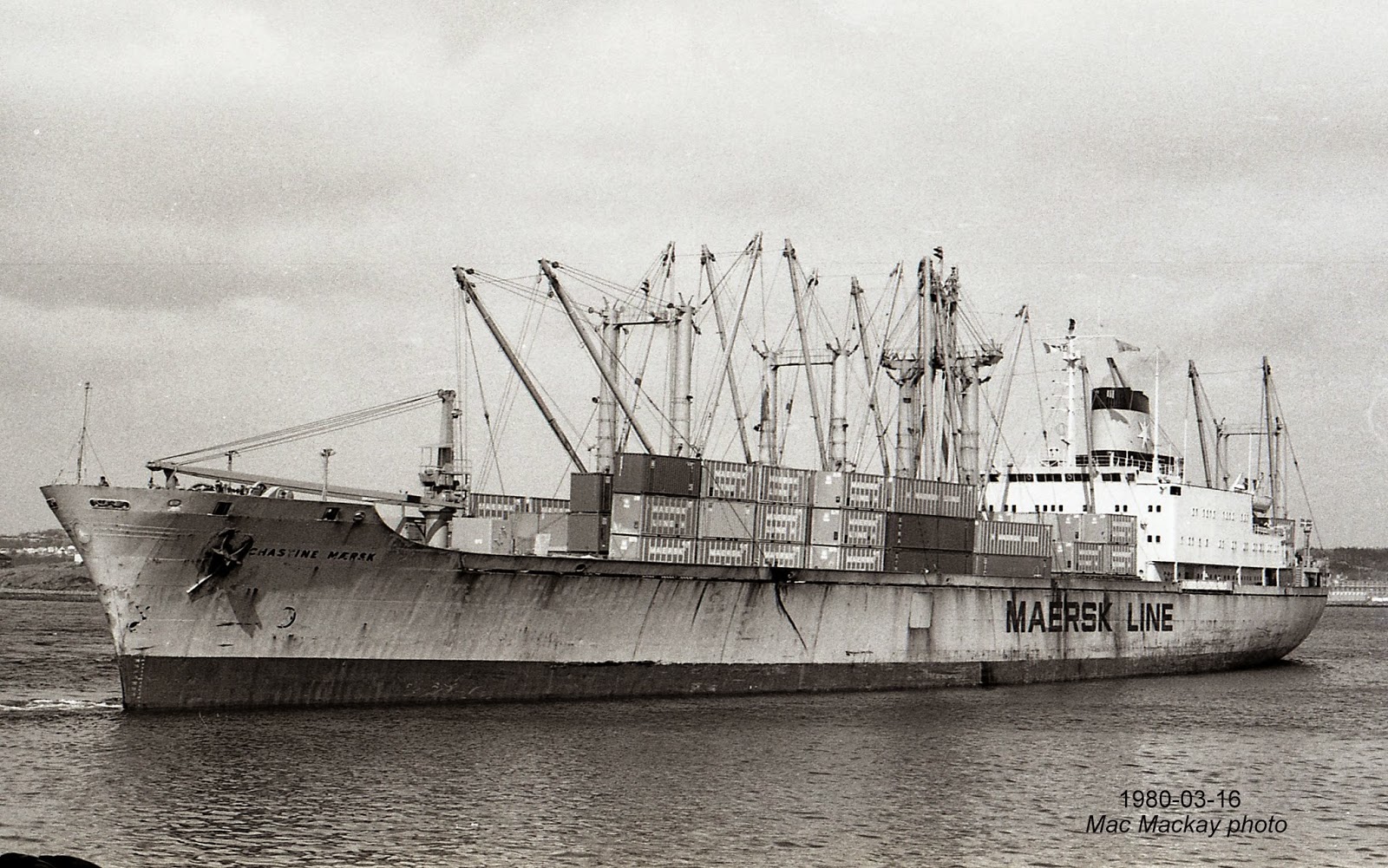 The sign of things to come. Chastine Maersk loaded down with containers (on deck only). It received its new forebody later the same year. In 1988 it was sold to China, becoming Hui He and lasted until 2002 when it was broken up in China. Note that "Maersk Line" has appeared on the ship's sides, instead of the ship's own name.

When the C ships were converted, it meant the end of Maersk's general cargo service to Halifax, and it was not until several years later that they reappeared here as a container line.