Thornhill - what were they thinking

Another of the periodic reports from the What Were They Thinking Department of  Shipfax.

On the strength of a contract to deliver Cape Breton coal to Ontario Hydro's power generating plants, Upper Lakes Shipping (ULS) built two revolutionary self-unloaders, Cape Breton Miner (in 1964) and Ontario Power (in1965) at their shipyard, Port Weller Dry Dock, in St.Catharines, ON. 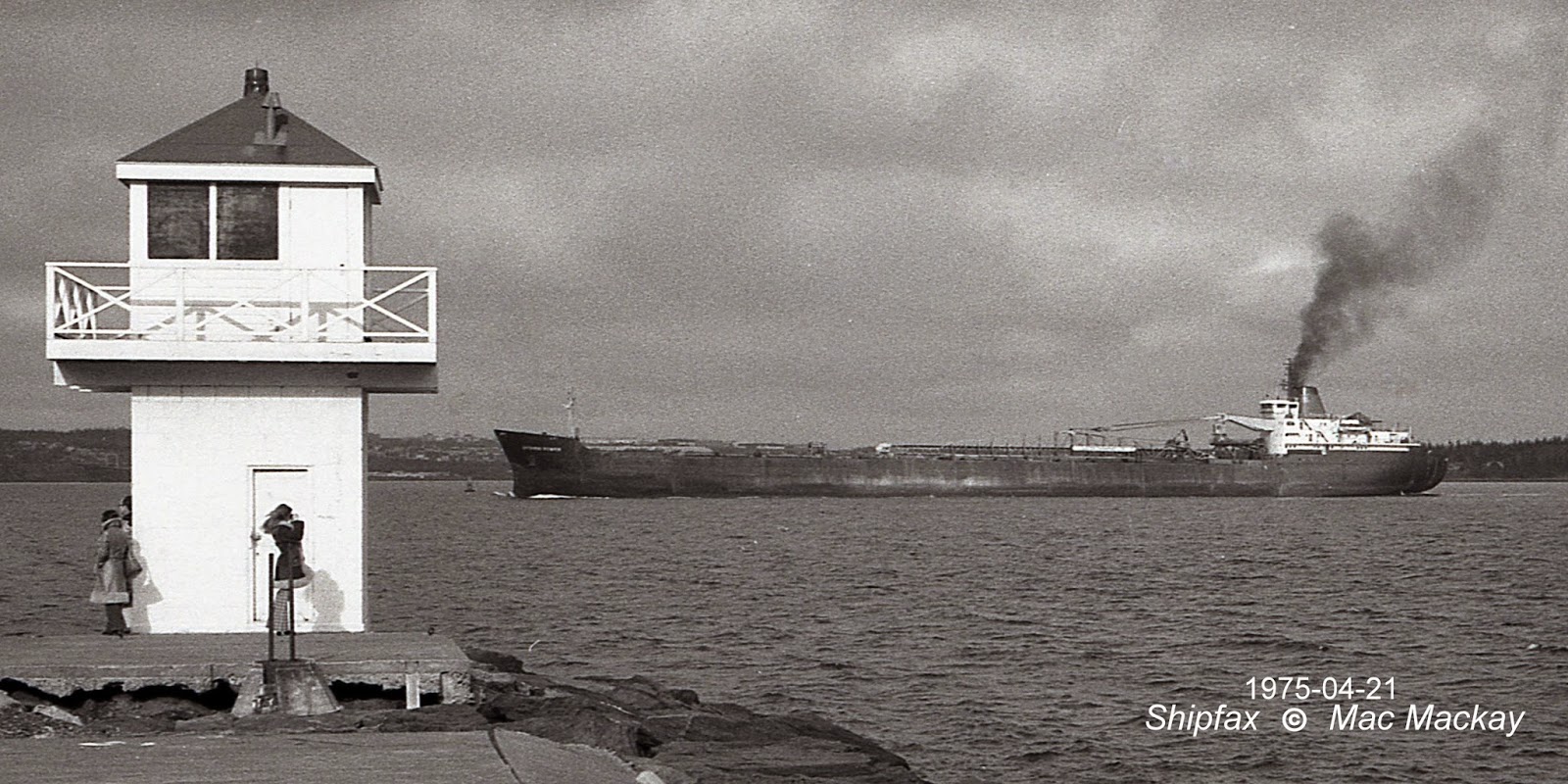 Ontario Power arrives in Halifax. The Ivews Knoll buoy is just under its bow, and in the foreground is the little lighthouse that used to be at the tip of the breakwater at Halterm.

The two ships, although not exact sisters, were built to navigate the St.Lawrence Seaway then trade deep sea when the Seaway was closed for the winter. On their return trips from the Lakes they could carry grain to lower St.Lawrence ports, then carry iron ore from Sept-Iles, QC to Sydney, NS.

Cape Breton Miner unloads grain-but using the grain leg, not is own self-unloading gear. The grain leg is a conveyor consisting of buckets on an 'endless' loop belt.

They were also suited for carrying aggregates, gypsum, phosphates and all sorts of bulk cargoes. Both ships called in Halifax from ttime to time, usually to load gypsum, but also to unload grain, to take bunkers or for repairs.

When the contract with Ontario Hydro ended, the ships were sent into deep sea trades more often.  Ontario Power was flagged out to Vanuatu in 1983 and transferred to ULS International under the new name Thornhill  (Thornhill in suburban Toronto was the location of an experimental feed farm used Maple Leaf Mills. John D. Leitch owned ULS and Maple Leaf Mills. This was the second ship to carry the name for ULS.)
In 1984 the ship was sold to Naviera Seri SA de CV of Mexico and renamed Alkali Seri giving some indication of its trade. In 1986 it was sold to Gulfmar Transportation CV, also under Vanuatu flag and renamed Kalli. It arrived in Kaohsiung, Taiwan for scrapping June 9, 1987.
Developments in self-unloader technology had made the ship obsolete, but also its size was restrictive for much ocean trading.

As we have seen Upper Lakes had in the meantime decided to get into larger self-unloaders that would not be able to transit the St.Lawrence Seaway, but rather than building new ships, they converted existing bulk carriers into self-unloaders. [see previous post on Cape Breton Highlander / Canadian Highlander / Citadel Hill.]
Whereas purpose built self-unloaders had their gear integrated into the ship's original construction, some originality was required for conversions. 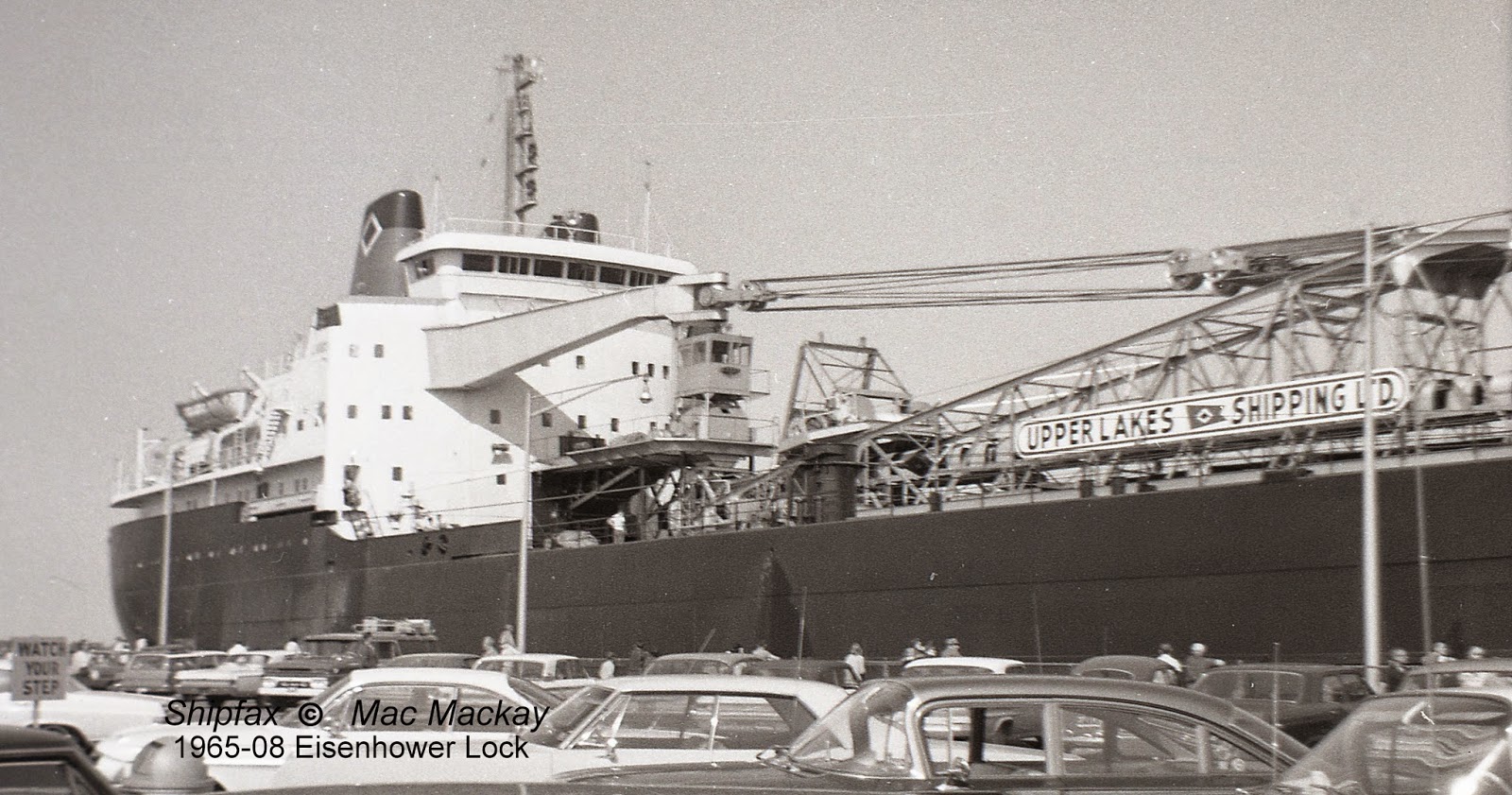 In its first season of operation Ontario Power glides into the Eisenhower Lock in the United States portion of the St.Lawrence Seaway. Support arms for the unloading boom are integrated into the ship's superstructure.

The conversion of the bulker Thorsdrake into a self-unloader was fairly straight forward (see previous post) - not so the next Thornhill.

Thornhill (iii) started out as a conventional bulker, fitted with four cranes and named Frotabrasil for Frota Oceanica Brasileira at the Engenheria e Maquinas SA (EMAQ) shipyard in Rio de Janeiro. Although construction was largely completed in 1982, the ship was not commissioned until 1987. By that time the owners had made other arrangements and the ship was sold almost immediately to the uniquely named Iwojima Island Steamship of  Cyprus Ltd and renamed Athos.
Next owner was the South India Shipping Corp and they renamed the ship Gennai Peruma.
ULS International bought the ship in 1993, renamed it Thornhill and undertook a spectacular conversion. Rather than build the usual hopper shaped holds into the ship, with the resultant loss of cargo capacity, the decision was made to use traveling elevators that would bring cargo up to deck level with bucket lift type legs which deposited it onto a conveyor system then to the unloading boom. When most of the cargo had been discharged, front end loaders were used to scrape the last dregs toward the unloader "legs".
Thornhill could also load itself when no shore facilities existed. This was a fairly unique advantage, but relied on complex and cumbersome machinery.

The ship's gross tonnage remained 21,733 and deadweight changed from 47,043 to 37,934 , presumably to compensate for the all the weight of the unloading gear. 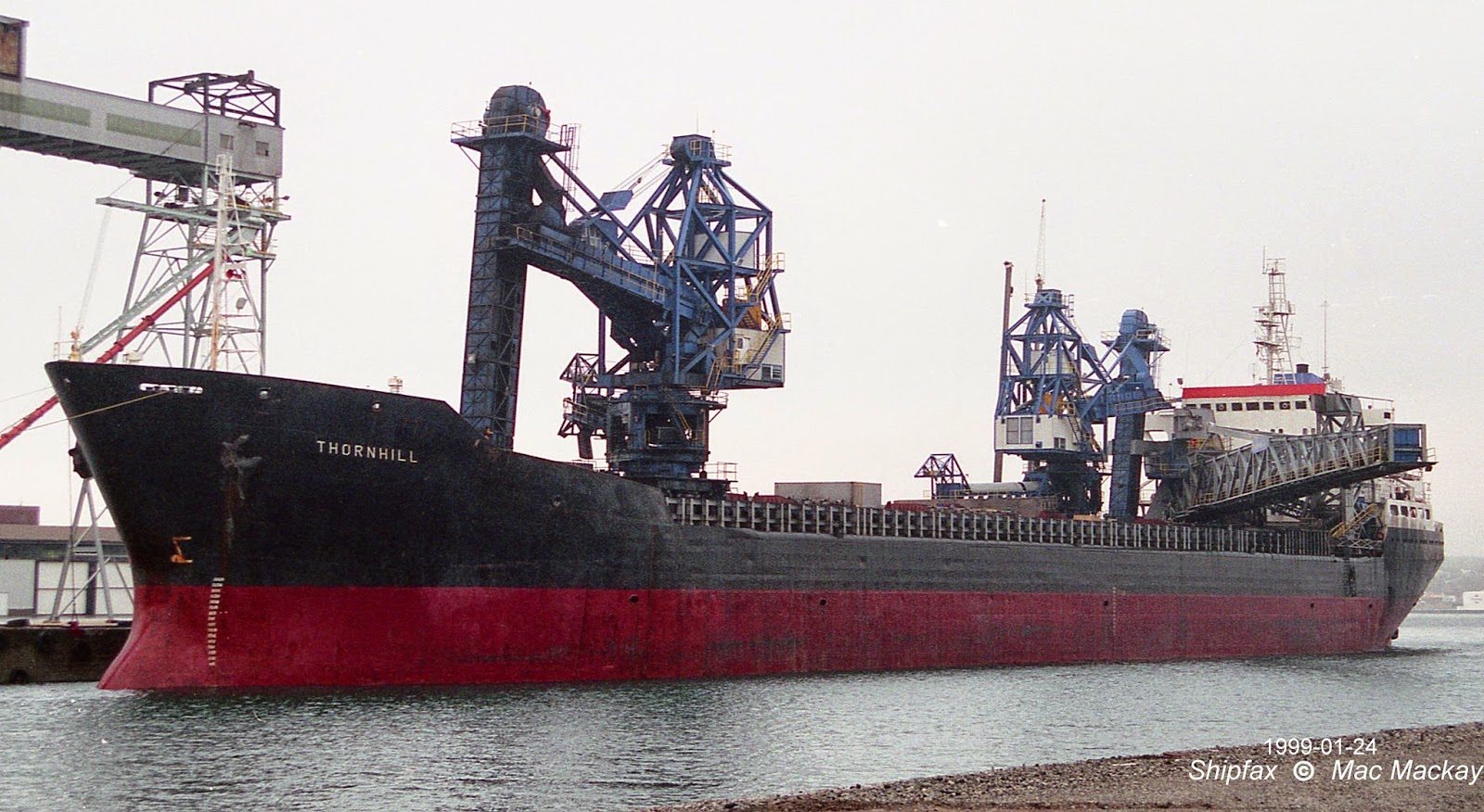 The two elevators traveled on rails on the ship's deck. The unloading conveyor boom is slewed out.

The ship stopped in Halifax January 23 to February 4, 1999 for repairs to the unloaders' bushings. The work required shore cranes to lift the unloaders slightly off their bearing pedestals. The ship then carried on to Auld's Cove to load aggregate.

An ungainly looking ship puts out to sea.

However later in the same year it went to Saint John, NB where the ungainly unloaders were removed. In their place three Northwest brand crawler cranes were installed on deck - one to starboard and two to port. 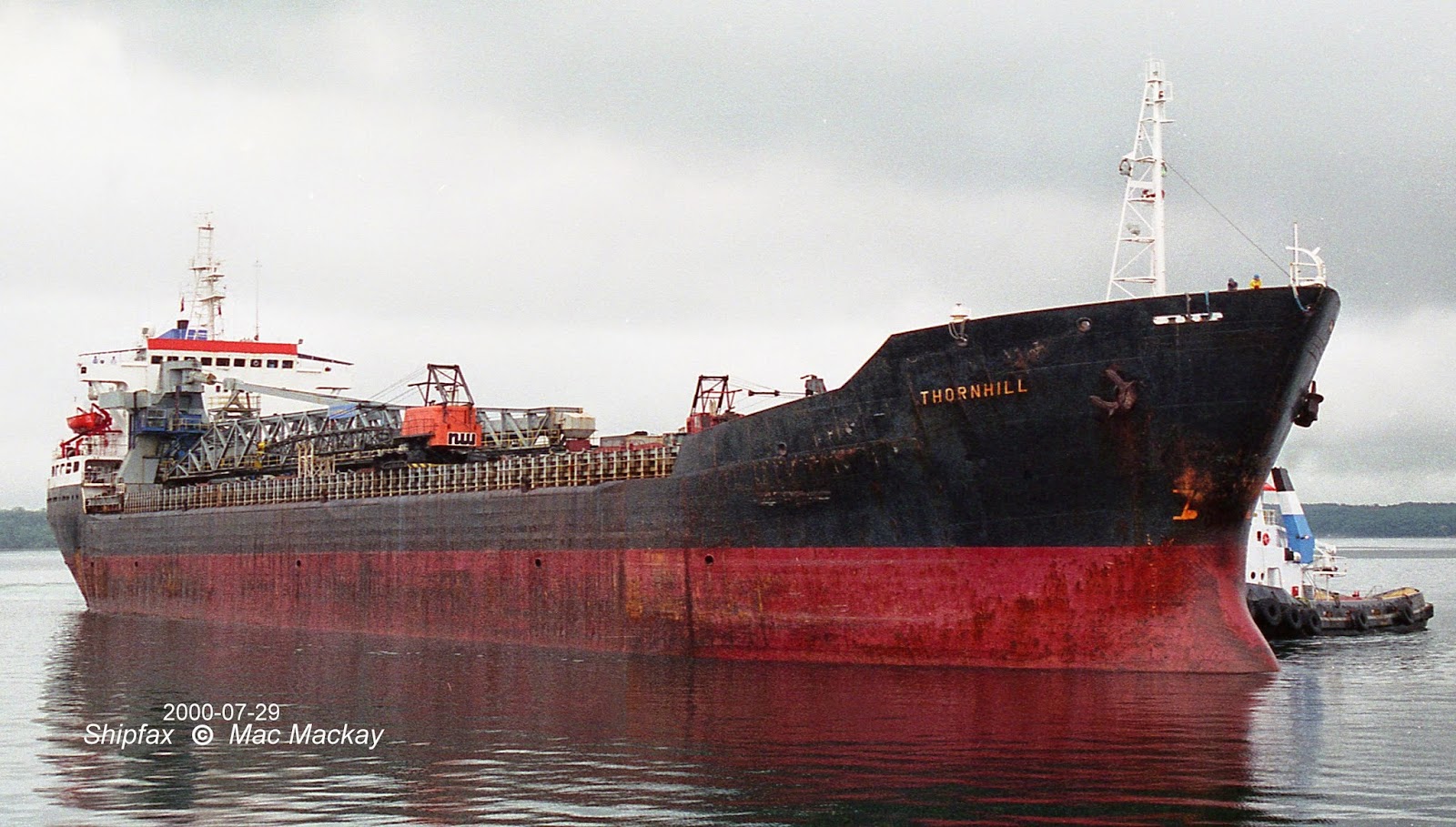 After removal of the elevators, the ship relied on crawler cranes to bucket the cargo onto the transfer conveyor.

At the same time the ship was transferred to Salem Shipping Inc and placed under the management of Barber Ship Management. In 2004 the ship was sold to Chinese owners becoming Chang Ming 9 Hao and in 2006 Guo Dian 5. It may still be in service.

The attached sketch was prepared for the print version of Shipfax in January 1999. I quote part of that entry: " The drawing attempts to show how all this works, and the photographs show the consequences." 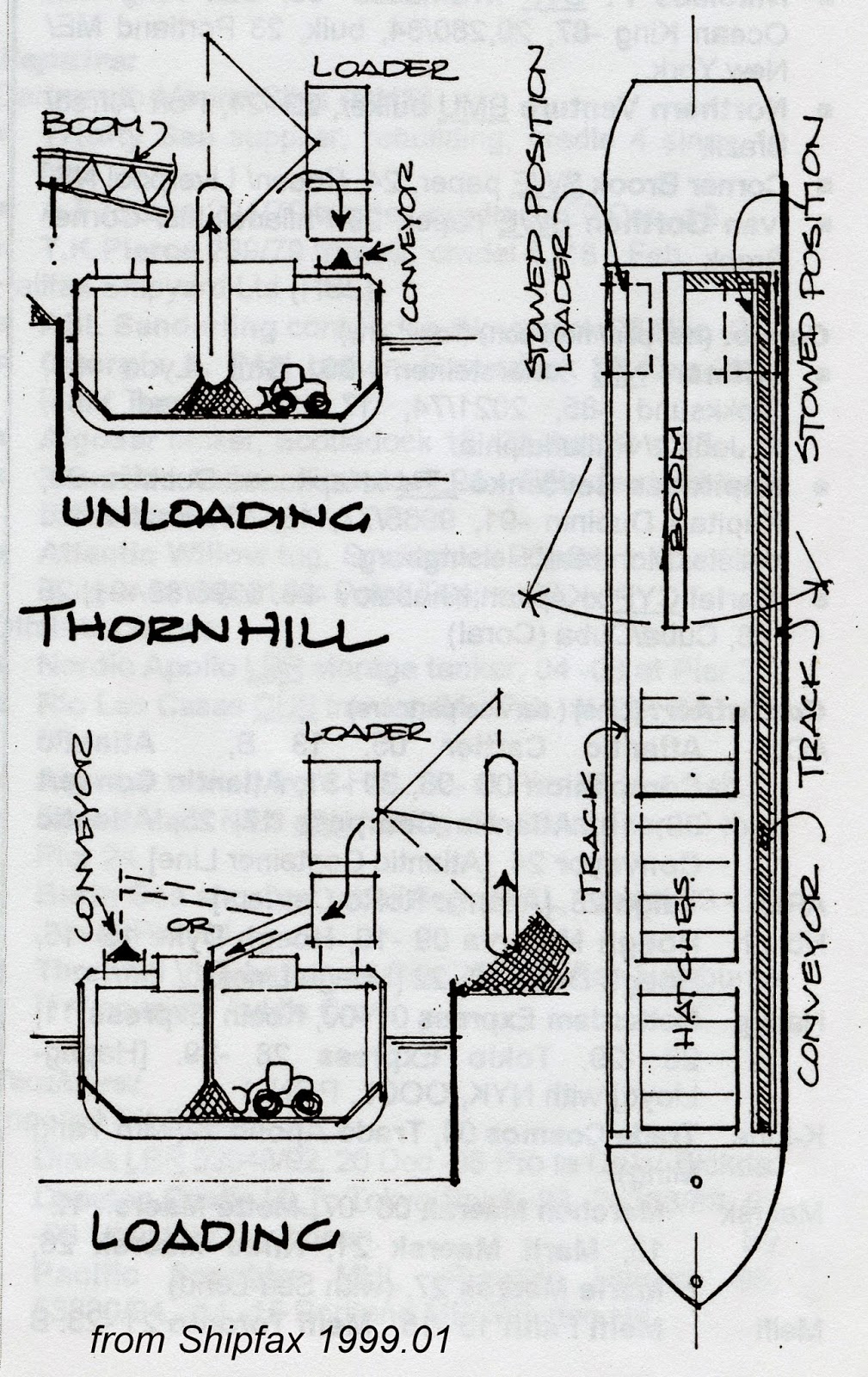