Ice conditions had improved somewhat in the Sydney Bight but high winds are now packing in the ice. Ferry service has been suspended again today.

I have been taken to task for suggesting that Marine Atlantic's ferries are icebreakers in their own right. Since I have never made that claim, I should clarify what I did say.
Marine Atlantic's largest ferry,  Atlantic Vision also has the fleet's highest ice rating. Built for service in the Baltic, it is classed by the American Bureau of Shipping as Ice Class 1A Super. This means that certain characteristics of its construction, cooling systems, and propulsion, mean that it is capable of navigation in certain ice conditions without the services of an icebreaker. However when conditions reach the proportions that they have in the Gulf and Cabot Strait this winter, the ice pressure is such that only an icebreaker can clear a path. Even then conditions may prove to be so tough that there are long delays as ships continually get stuck and need to be freed.

When CN Marine began to cater to truck trailers, they initially chartered two small RoRo ships from Stena AB of Gothenburg Sweden. Stena Trailer and Jarl Transporter measured 1306 grt and were built by Akers Trondhjems of Norway in 1972. In the spring of 1974 ice was particularly heavy and delays caused a huge backlog in North Sydney. Both ships relocated to Halifax in February and March. 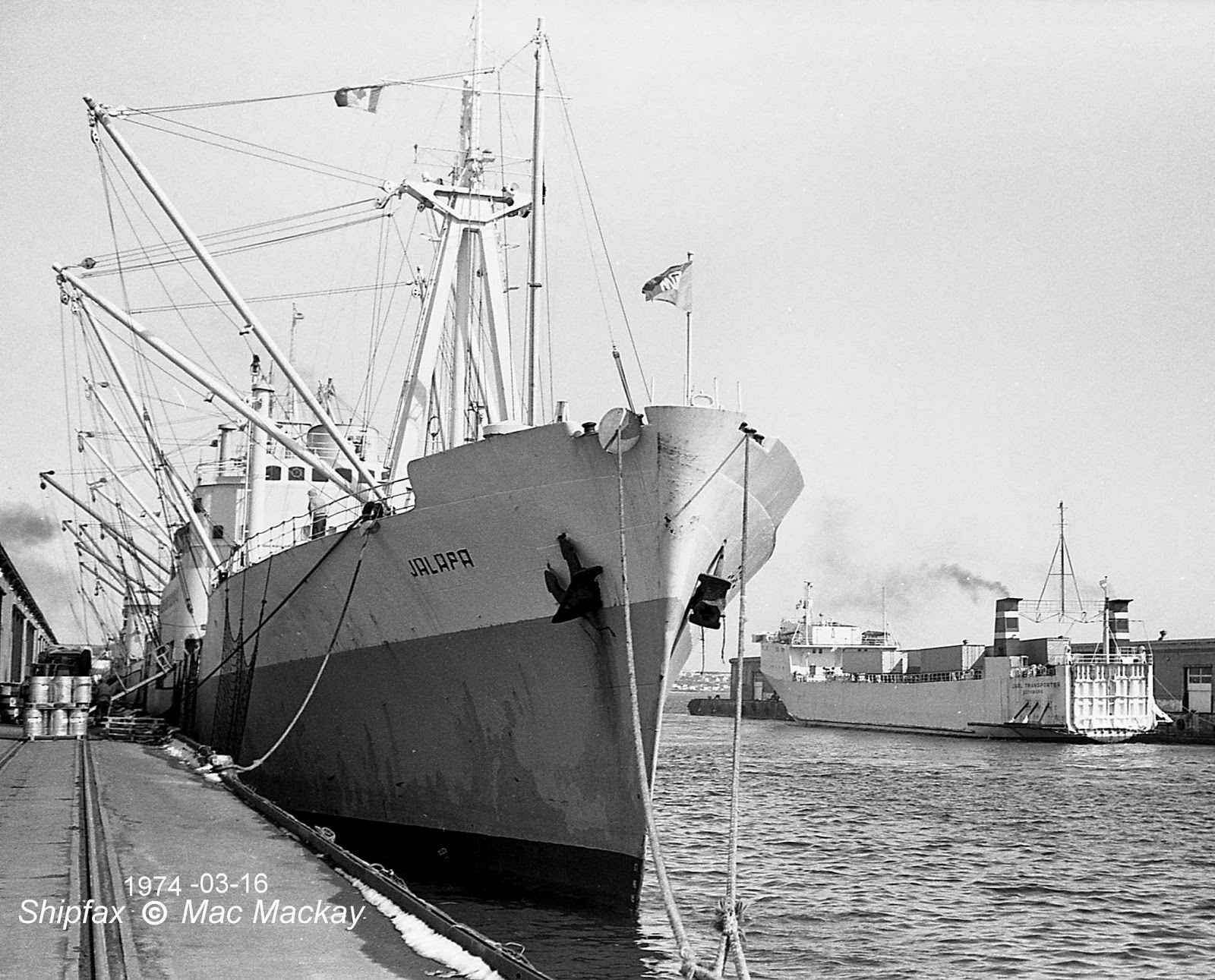 Jarl Transporter has arrived from Newfoundland . It is waiting at pier 37 until its fleetmate sails. Meanwhile while the Mexican Japala loads conventional break bulk cargo at pier 34. 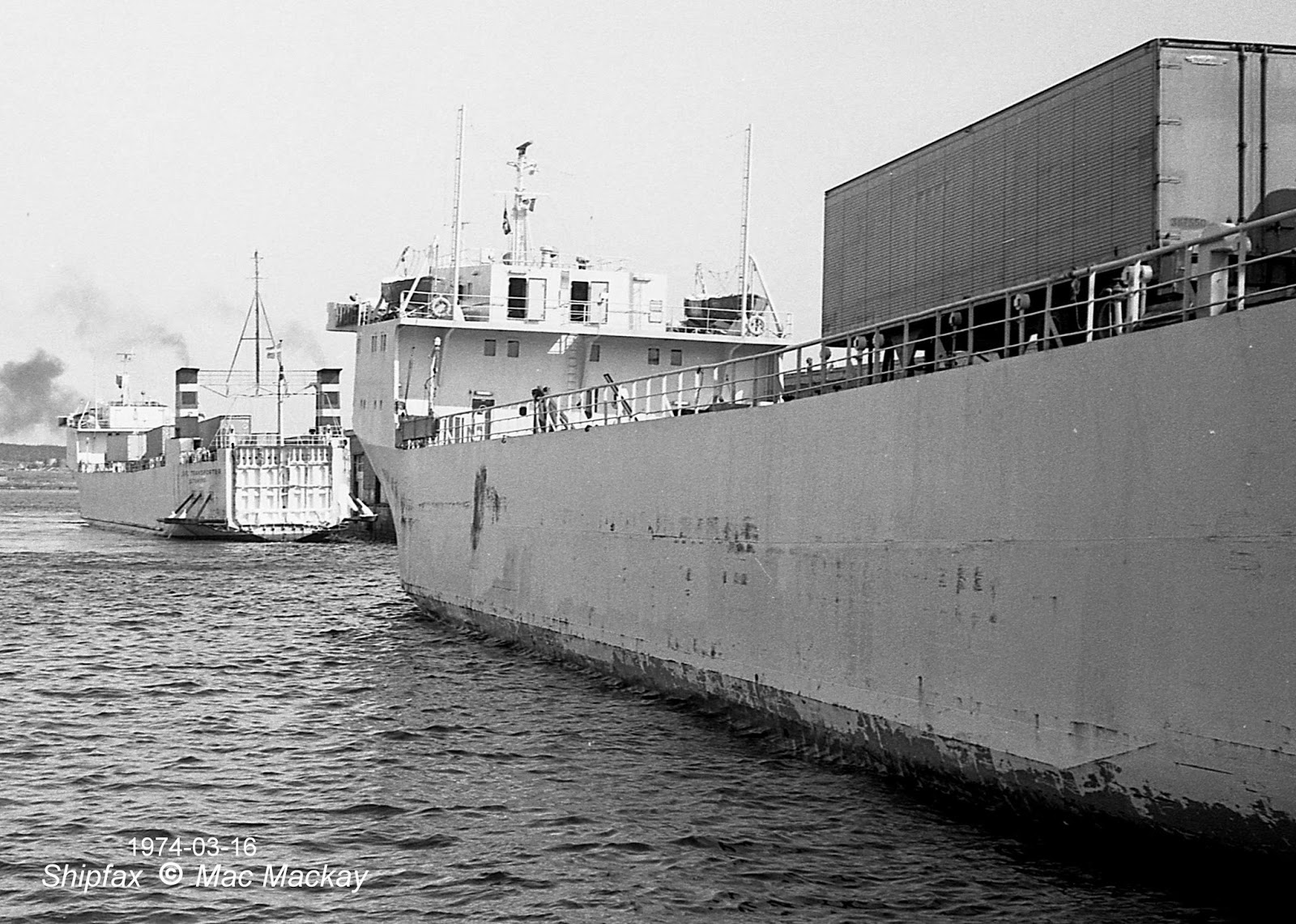 Stena Trailer in foreground shows the wear and tear from working in ice. The ships were on CN's drop trailer service ( truck tractors did not accompany the trailers.)

At the same time CN's fleet of half a dozen or more chartered coastal freighters were dividing their time between Halifax and Mulgrave as loading ports. The ferries Lucy Maud Montgomery and Leif Ericsson were also using Mulgrave.

Ice was also heavy in 1980 when one of  CN Marine's large ships was diverted to Halifax.
Marine Nautica was one of two ferries built in by Rickmers, Bremerhaven for Stena AB of Sweden.

Stena Nautica it was built in 1974 and had a capacity of 1200 passengers and 480 cars. It was soon renamed Marine Nautica when it took up a five year bareboat charter to CN Marine. Sister ship Marine Atlantica built in 1975, was built with a similar charter but went directly to Marine Atlantic. In 1980 Roylease Ltd financed purchase of the two ships by Newfoundland businessmen and continued with another five year charter. The ships always flew the Bahamas flag to evade Canadian duties - a privilege extended to crown corporations.

Both ships were reasonably ice capable, but the spring of 1980 was particularly severe. The two icebreakers CCGS Labrador and Louis S. St-Laurent were having trouble keeping a clear a track into Sydney for the two car/truck ferries and the rail ferry Frederick Carter, all of which were continually getting stuck and delayed. There was a major traffic jam at the North Sydney terminal and to ease the backlog, Marine Nautica came to Halifax  March 28, 1980.

A rather ragged looking Marine Nautica tied up stern in at the pier 31 ramp. 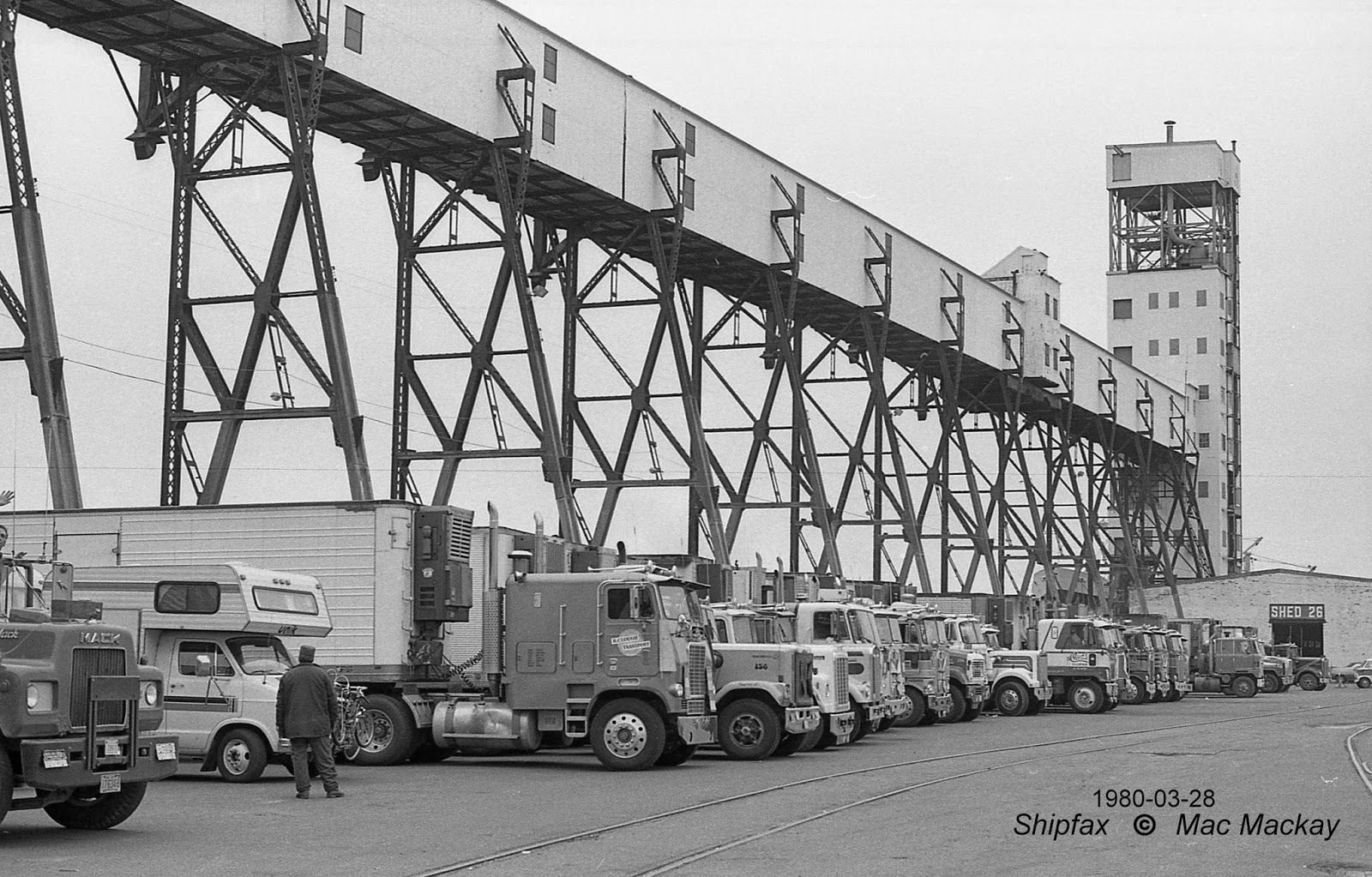 Part of the lineup of trucks (and one camper van) waiting at pier 25.

Sister Marine Atlantica was quite accustomed to normal ice conditions too, and is seen here making her way out of North Sydney in March 1983- a more normal year.

The charters were not renewed for 1986 and the ships were sold for service in the Mediterranean.
Marine Nautica became Corsica Marina II in 1986 and is still running under the same name.
Marine Atlantica, was sold to the same owners and initially renamed Corsica Vera but in 1987 became Sardinia Vera. Both ships are based in Livorno.

The St-Pierre et Miquelon feeder Ile de Saint Pierre which ran out of North Sydney in those days was also diverted to Halifax in March 1980, but that was not unusual. It came to Halifax every spring when ice was bad. 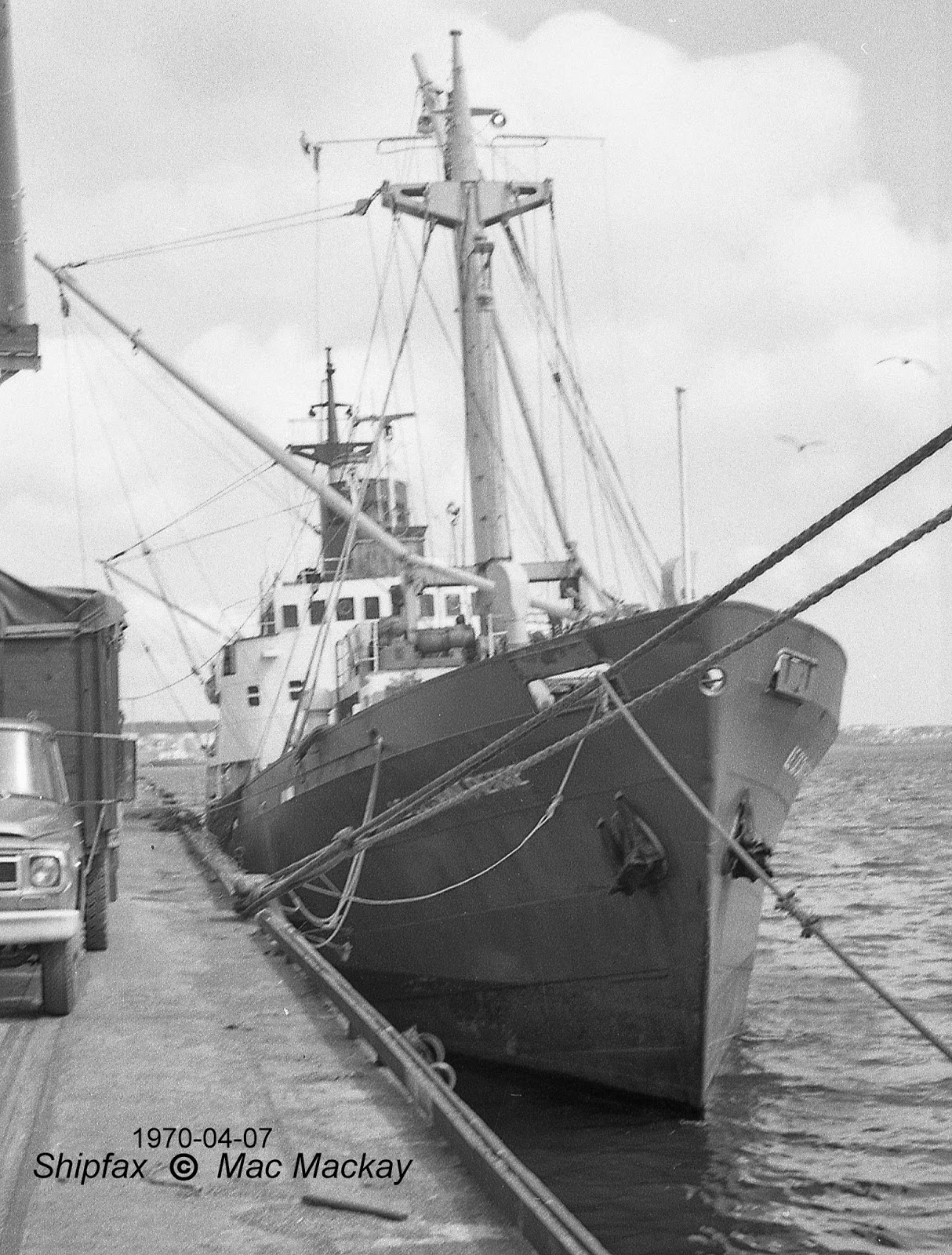 Built in 1957 by Henry Robb Ltd in Leith, Scotland, for the British company General Steam Navigation as Sandpiper, it measured 1324 grt.  With engines amidships it was a miniature version of the typical freighter. It worked cargo fore and aft with traditional derricks. Paturel Frères of St-Pierre operated the ship for the French government from 1967 to 1981. It then went to Greek owners as 81: Alinda, 82: Katia K. then moved on to Saudi Arabia, where it was laid up in 1983. Eventually it reached Gadani Beach in 1989 as Voyager II and was broken up.