As usual for a Saturday, there was lots of activity in the harbour - some to do with catching up after many delays due to heavy snow, some in advance of another weather system (this time mostly rain, to herald the arrival of spring) and some just normal activity.

Sloman Hermes arrived for bunkers. The ship was here December 13 at pier 31, apparently for repair.  A small chemical tanker of 11,298 grt, 16,418 dwt it was built in 2012 by  Jiangzhou Union in Rui Chang, China, and operates in the Navig8group tanker pool. 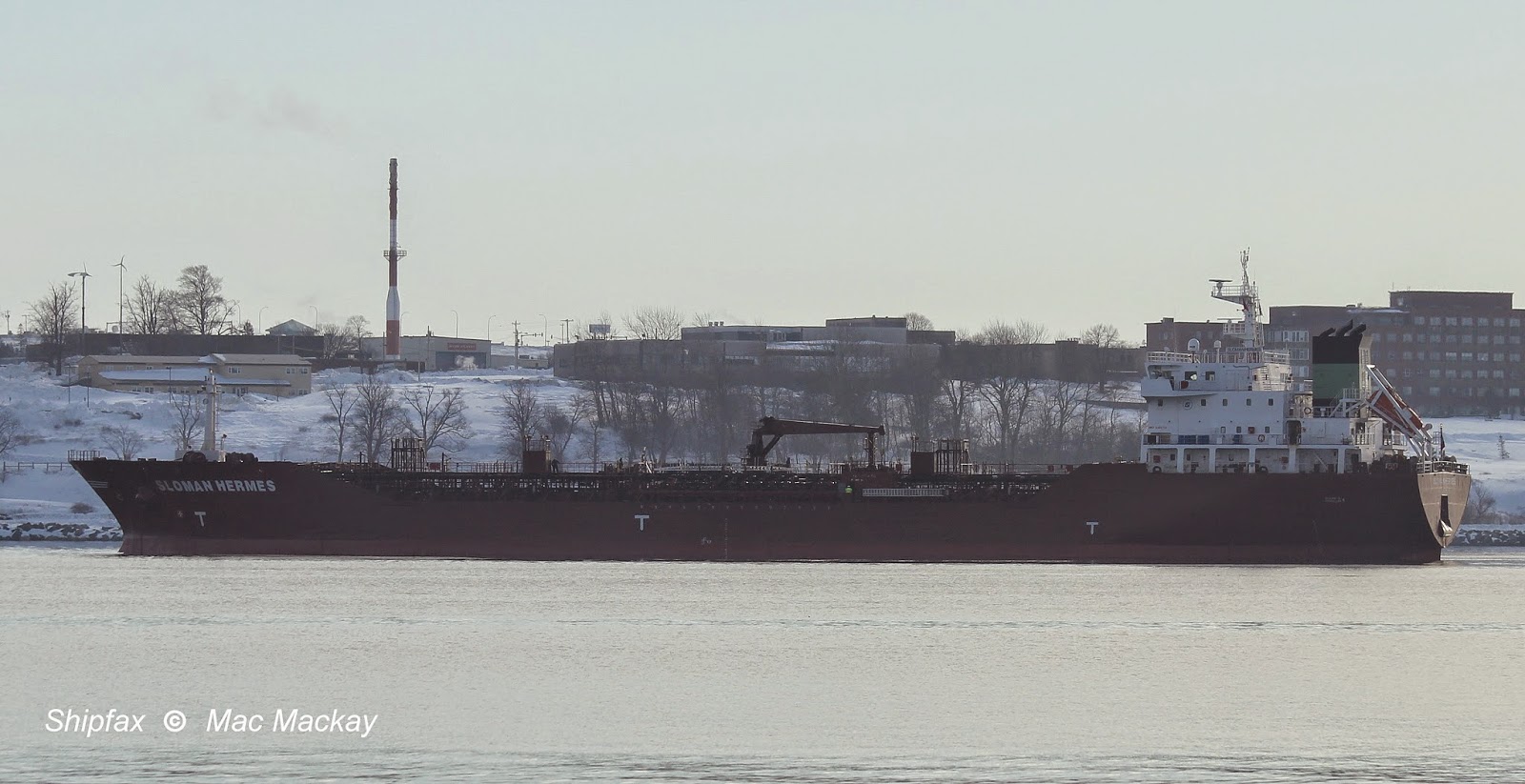 Federal Tweed did eventually move to pier 27, but there was some problem after she weighed anchor in the Basin and Dominion Diving's Halmar came out to assist. It appears that a heaving line may have become fouled in the bow thruster. In any event the Narrows was busy with arrivals and departures - see below - and  she eventually was free to move. Whatever her problem (likely a bent prop blade), it is supposed to be fixed by this evening allowing her to sail.

Federal Tweed had weighed anchor, but was holding in the Basin for arrival of the Halmar.

Federal Tweed is owned by Fednav, one of more than 100 owned and chartered ship in the Canada's largest shipping company. At 31,590 grt, 55,317 dwt, with ice class 1C, it has four 30 tonne cranes (and clamshell buckets on deck) and is considered a supramax bulker, i.e. between 50,000 and 60,000 dwt
-smaller than (old) Panamax and thus handysize. If all these terminologies are confusing, there is a good reference available http://maritime-connector.com/wiki/ship-sizes/ 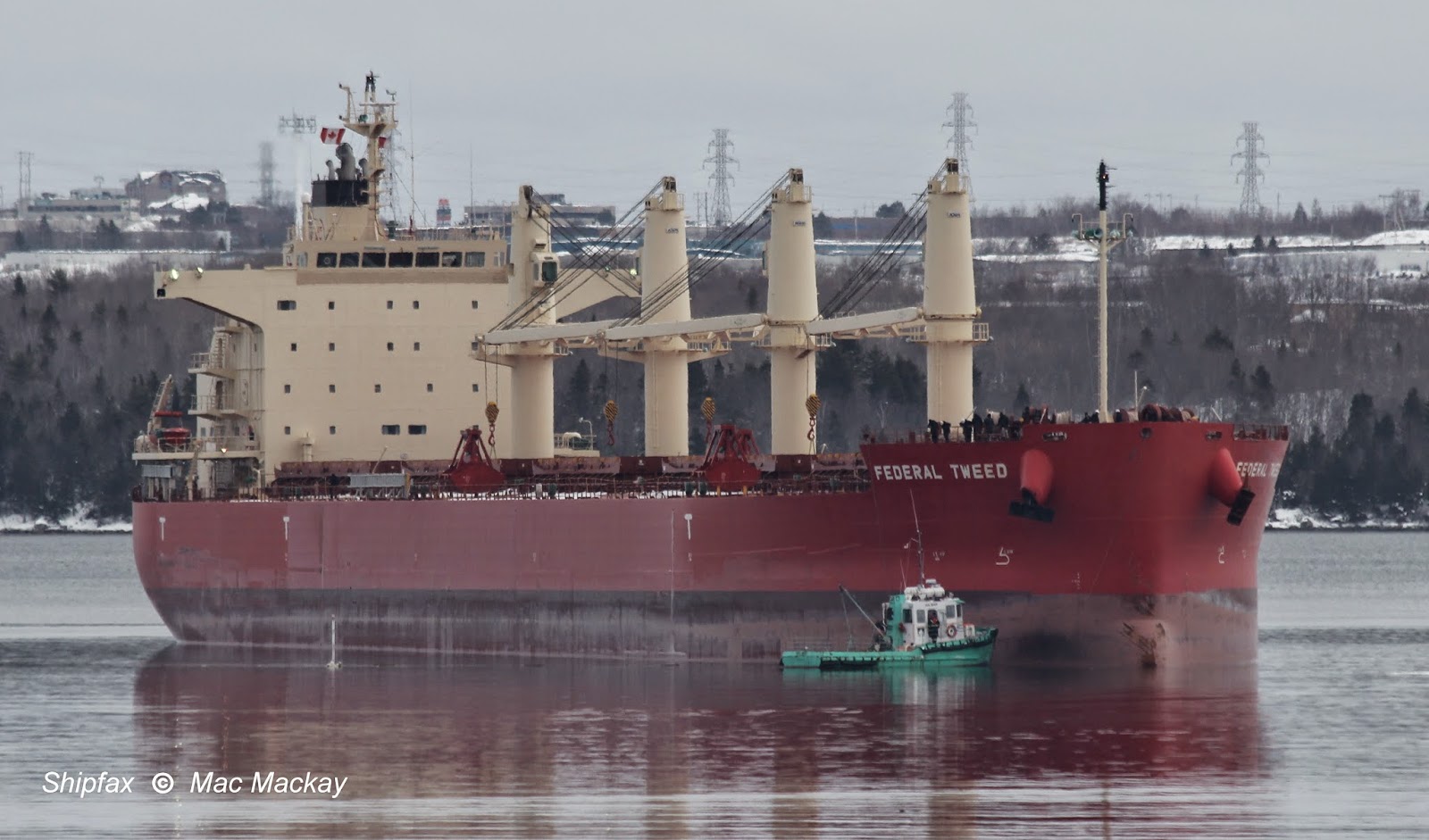 Halmar under the bow, with a number of extra hands on the foredeck peering over the rail. A heaving line is barely discernible from the centre lead down towards the bow thruster.

The ship was built in Oshima, Japan in 2013 and has a new hull design with fuller bow and almost plumb stem, with smaller bulbous bow.

The Narrows was a busy spot for time this morning with the arrival of Atlantic Cartier on its regular visit. First though was Atlantic Willow, putting on a little extra speed to get ahead of the Cartier. 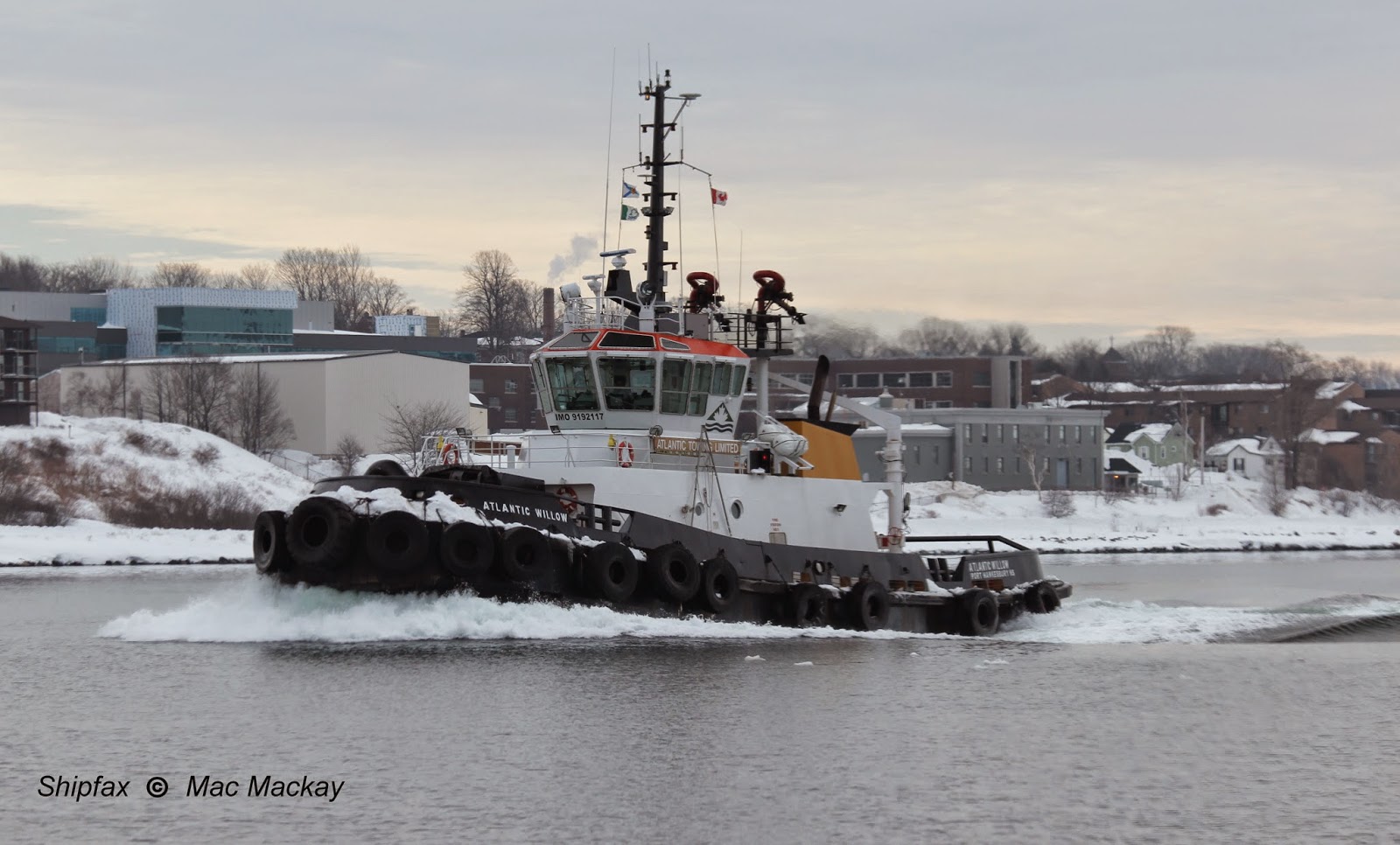 It is unusual to see a tug running at speed thought he Narrows. 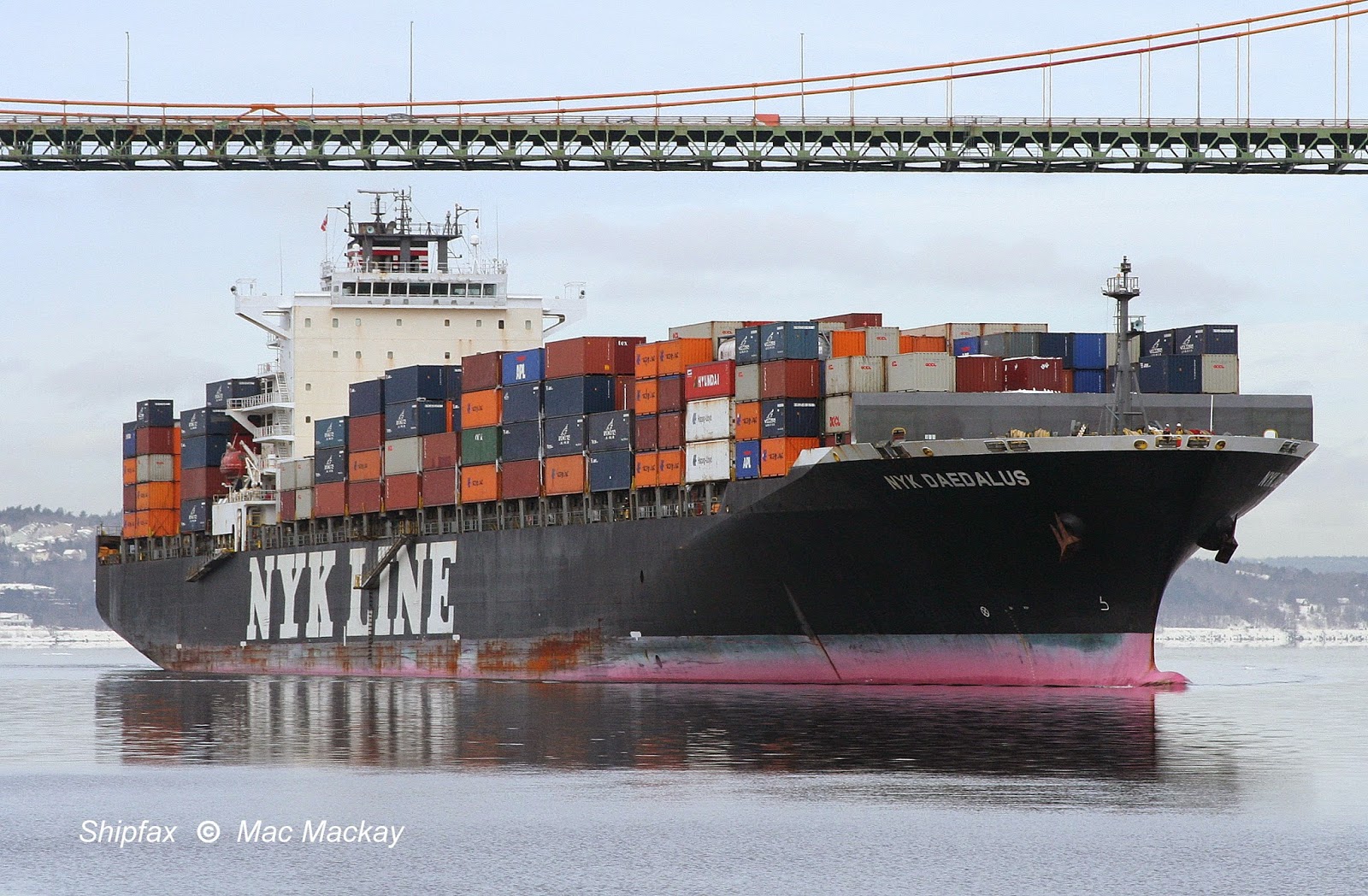 NYK Daedalus has cleared the MacKay bridge, and is southbound in the Narrows. Escort tug Atlantic Oak is not visible, but is tethered to astern.

NYK Daedalus first called here July 21, 2014. It was built in 2007 by Hyundai, Ulsan, measures 55,534 grt, 65867 dwt, and has a capacity of 4922 TEU.
Meanwhile Yantian Express was still working cargo today, with trucks lined up on several streets leading toward the Fairview Cove terminal. There have been delays of inbound rail cargo due to the heavy snow and clearing the rail yards to move cars - those same cars must be emptied to load outbound cargo.
It is indicative of the problems with these larger ships however. They have so many containers to move that they place big demands on the terminals. Expect this situation to get worse as bigger and bigger ships arrive, even in good weather. Yantian Express arrived Tuesday March 17, the day of a fierce winter storm, with 70cm of snow and there was likely no work that day or most of the following day. 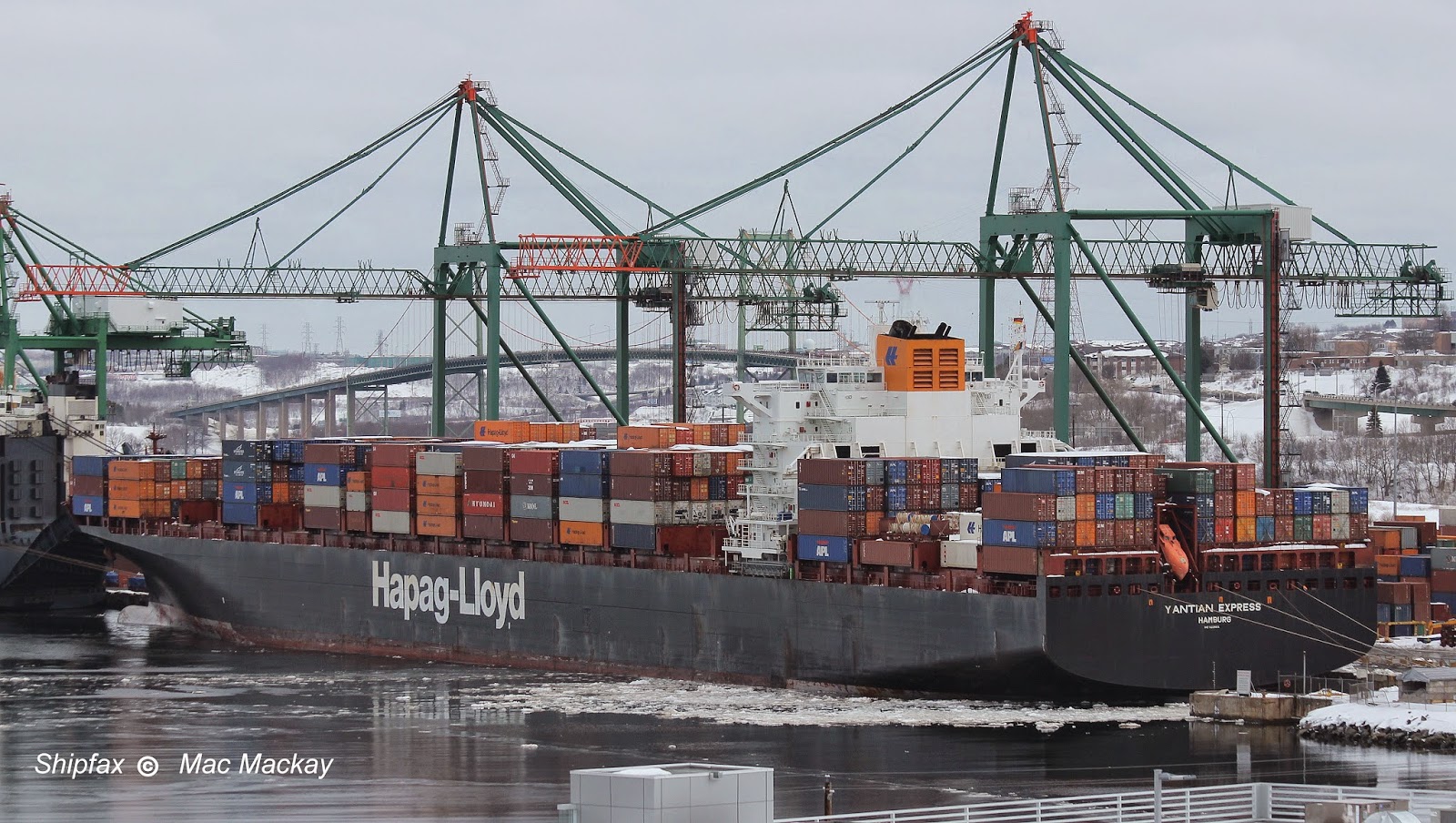 Yantian Express partially surrounded by snow dumped from clearing operations in the terminal.

Yantian Express, which sailed as Shanghai Express until 2012, was built in 2002 by Hyundai, Ulsan and measures 88,493 grt, 100,003 dwt, with a capacity of 7,506 TEU (700 reefer). It has just been displaced on the Asia-Western Europe service by even larger ships as Hapag-Lloyd rationalizes its fleet. It has announced that it will sell or scrap 16 ships - all of smaller size.

At pier 9c Harefield was receiving the ministrations of Connors Diving under its stern, thanks to ice damage.

And in partial answer to the burning question How Much Snow Was There? I offer this photo of a gang of workers on the roof of the New Halifax Shipyard Assembly Hall, removing snow from the lowest roof,  - by hand (they also had a snow blower). The size of the drift against the higher wall is in excess of 10 feet, and is packed hard because it faces south and is exposed to sun all day. 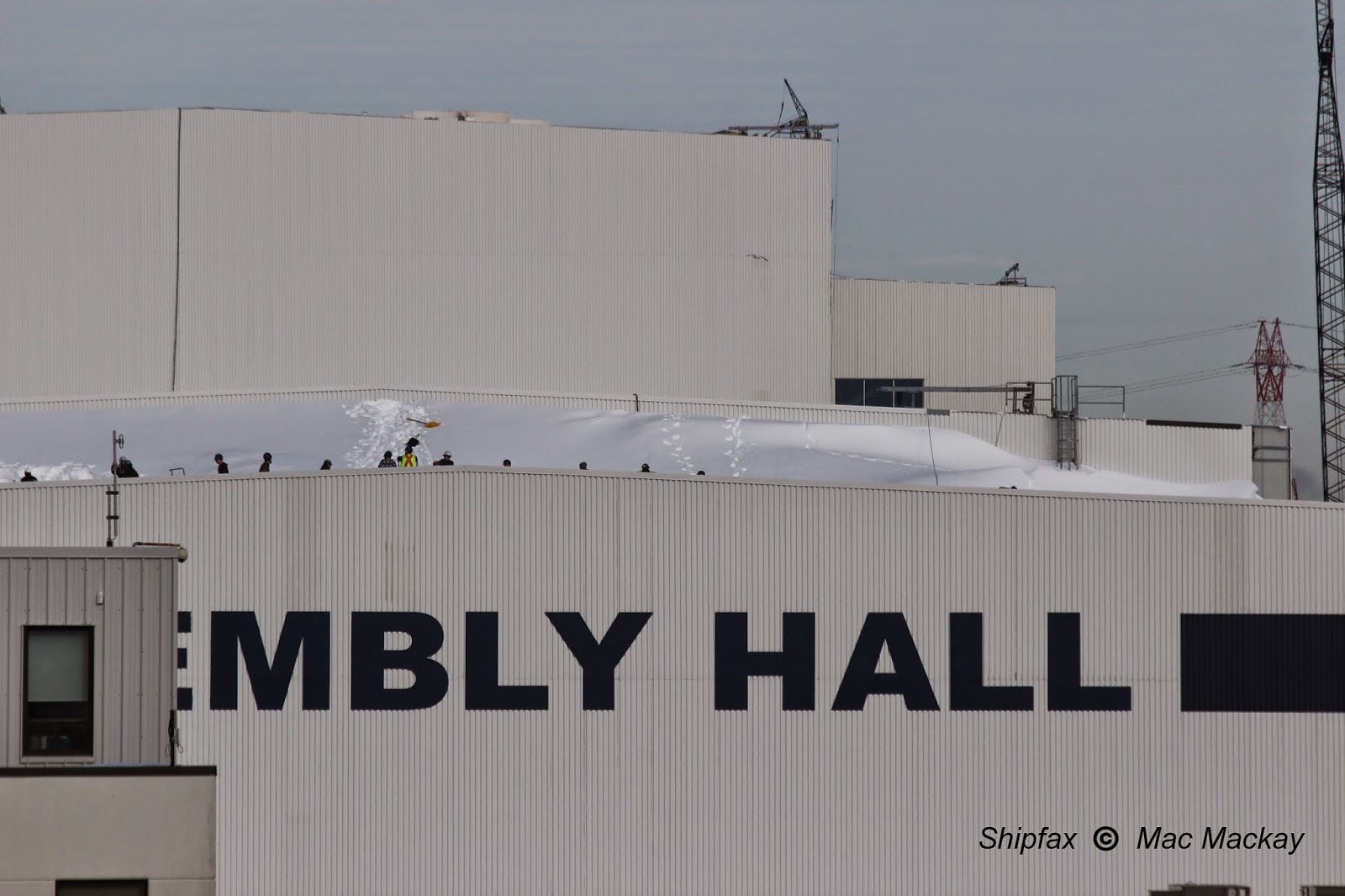 The accumulation of snow and ice, melting and refreezing and fresh drifted snow on top has resulted in many roofs now loaded in excess of their design capacity. Tonight's rain, will result in untold additional stress, particularly when drains are blocked.

According to most sources there has been 100cm in March, with 70 cm on March 21 alone..