A recent query from England sent me to the shoebox for the story on seven steam powered trawlers that National Sea Products Ltd (NatSea) operated in the 1950s and 1960s.

A brief background on Natsea now known as Highliner Foods Ltd for its best known brand. It was formed in 1945 when two holding companies merged. W.C.Smith + Co of Lunenburg and Maritime - National Fish Co of Halifax were the major players in the industry controlling some 24 fish processing firms including: National Fish Co, Maritime Fish Co, The Lockeport Co Ltd, Leonard Brothers Ltd, Leonard Fisheries Ltd, O'Leary + Lee Ltd, Fasterfat Ltd, O'Connors Fish Co Ltd, White's Fish Co Ltd, National Laboratories Ltd, Lunenburg Sea Products, Nickerson Brothers, and D.Hatton.  The subsequent history is long and convoluted and beyond the scope of this posting, but there is lots of info out there, such as: http://www.company-histories.com/National-Sea-Products-Ltd-Company-History.html.

In 1950 National Sea Products moved to acquire steel hulled trawlers to add to its fleet of wooden draggers and schooners, and to replace some aged World War I era steam trawlers.

The first two were acquired as already built by  by Cochrane + Sons Ltd in Selby, England. A shipyard 50 miles inland from Hull on the River Ouse, it was famed for its trawlers, but also built tugs and other specialized craft.. The two trawlers were registered in Cardiff to Neale and West Ltd, and they had fished for about a year before Natsea purchased them.
They were 369 grt, measured 153'-8" loa x 25'-2" and were powered by an Amos+Smith triple expansion steam engine of 680 hp.

GATEHOLM / CAPE SMOKY
Fist acquired was the Gateholm, built in 1949. It arrived in Halifax October 31, 1950 after a ten day trip from Hull via St.John's, NL.Within days of its arrival it went to sea and was back in port November 7 with its first catch. Before the end of the year it was renamed Cape Smoky and fished for NatSea until 1968 when it was sold for scrap.

FLATHOLM
Sister Flatholm made it as far as the east coast of Newfoundland when it ran aground November 19, 1950 near Bay Bulls in dense fog and became a total loss.All eleven of the British delivery crew escaped safely, as did the Canadian captain and chief engineer that had also been making the trip to familiarize themselves with the boat. It was to have been renamed Cape Sambro. 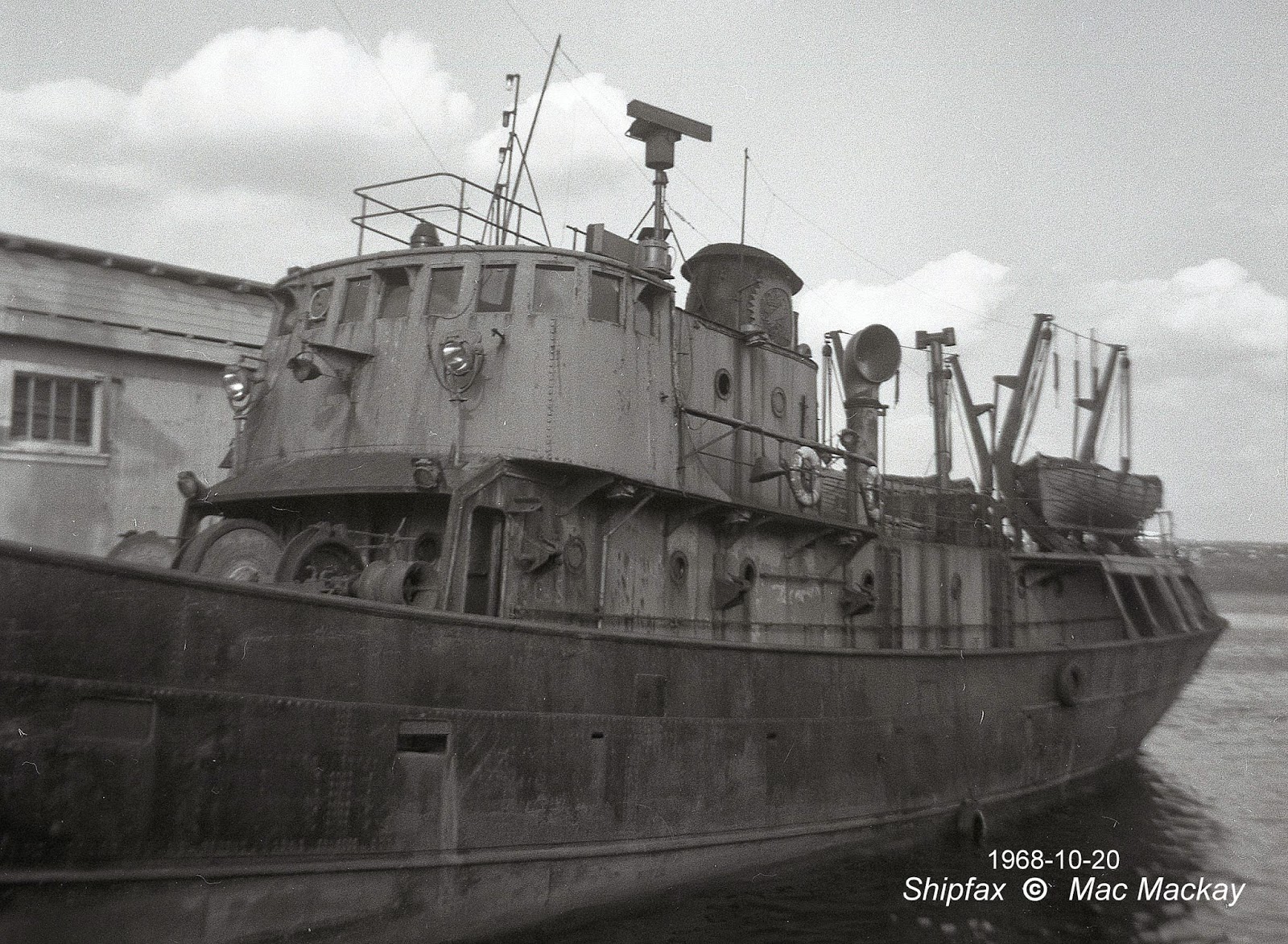 Cape Beaver at its customary Halifax berth at the foot of Morris Street, but having seen better days.

Cape Beaver, completed in October 1951, departed Selby October 17 and Falmouth October 19, and arrived in Halifax October 31. It was the first steel trawler especially built for Canadian fisheries and worked out of Halifax starting November 7, 1951 until 1969. It was sold to various owners, not all accurately recorded, and hulked about 1971, and removed from registration. 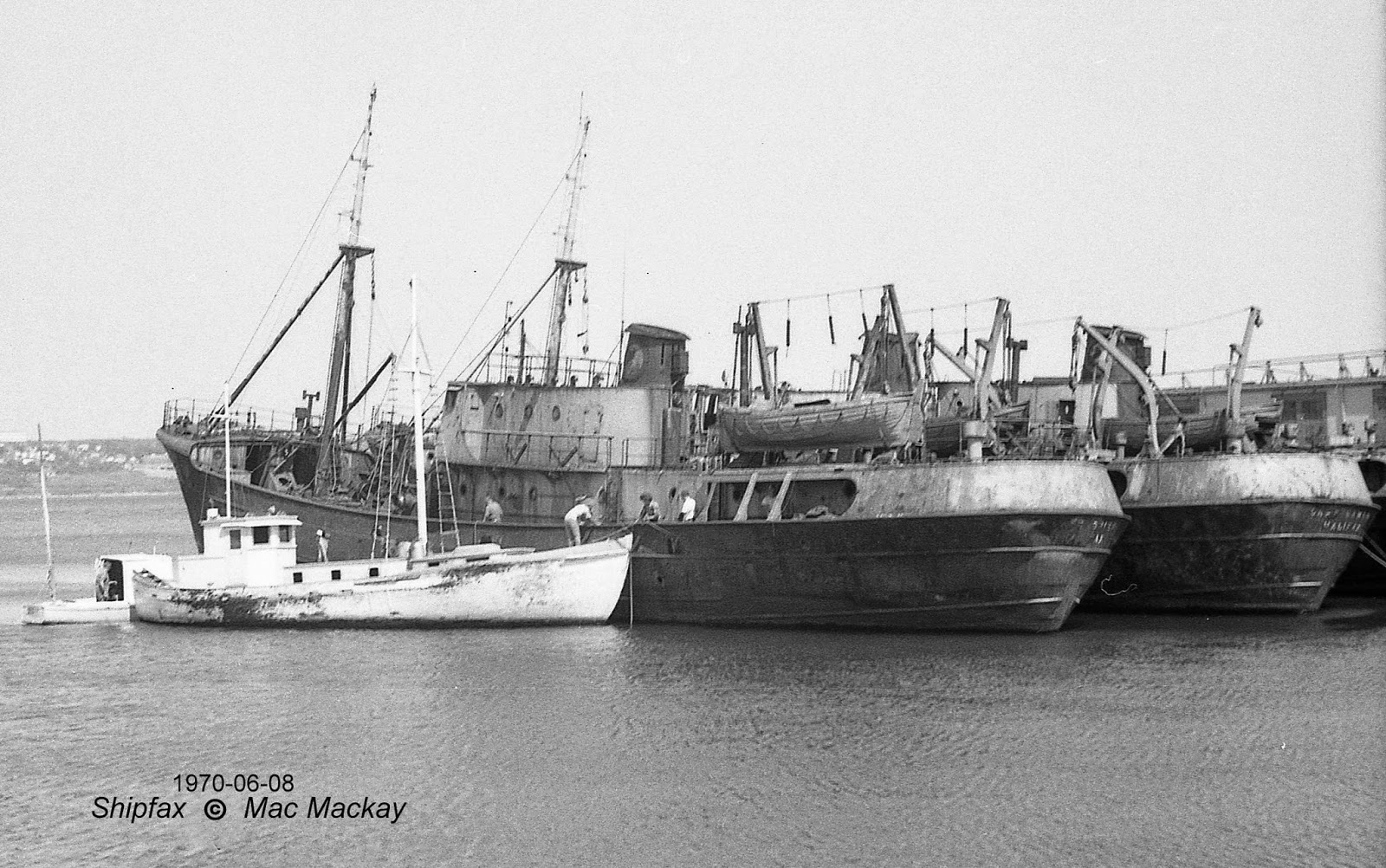 An informal salvage crew has just refloated the little wooden vessel Miss Joyce and are tying it up to one of the three retired NatSea steamers at Purdy's wharf: Cape Beaver, Cape Brier or Cape Sambro. 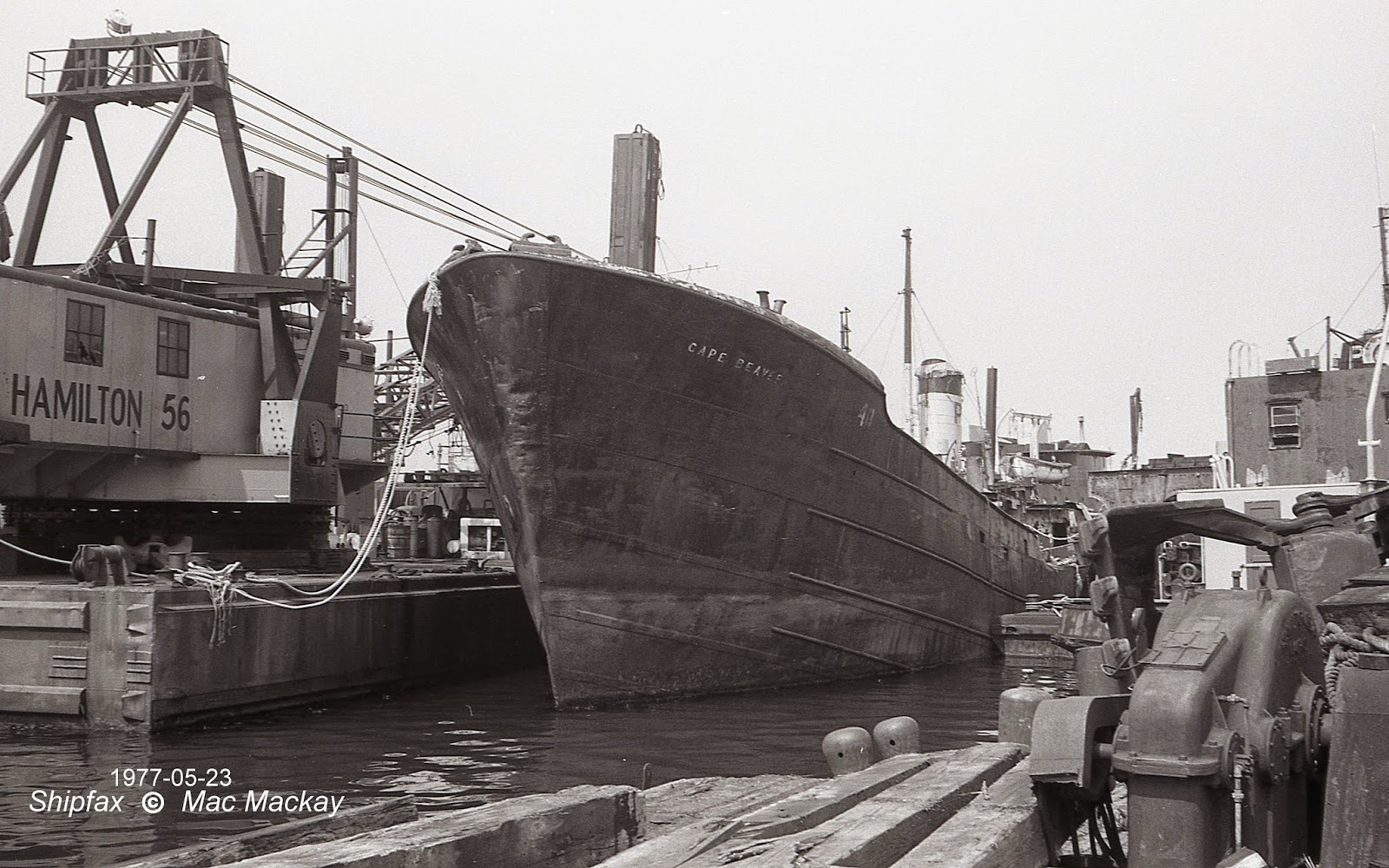 Cape Beaver amongst the various hulks and junk at J.P.Porter's Dartmouth yard. The crane scow Hamilton 56, at left, eventually became Channelmaster and was only broken in Halifax up in 2014.

Cape Beaver then kicked around the waterfront until 1974 when it was bought by J.P.Porter + Co for conversion to a bottom dumping spoil carrier for dredging and permission was granted to rename it J.P.P.No.602. The work was never carried out and the hulk remained in Porter's yard in Dartmouth until 1977 when most of the company's assets were sold for scrap. Nittolo Metals Inc of Cap-St-Ignace, QC broke up the hull in situ, though I suspect portions of its bottom remain there still. 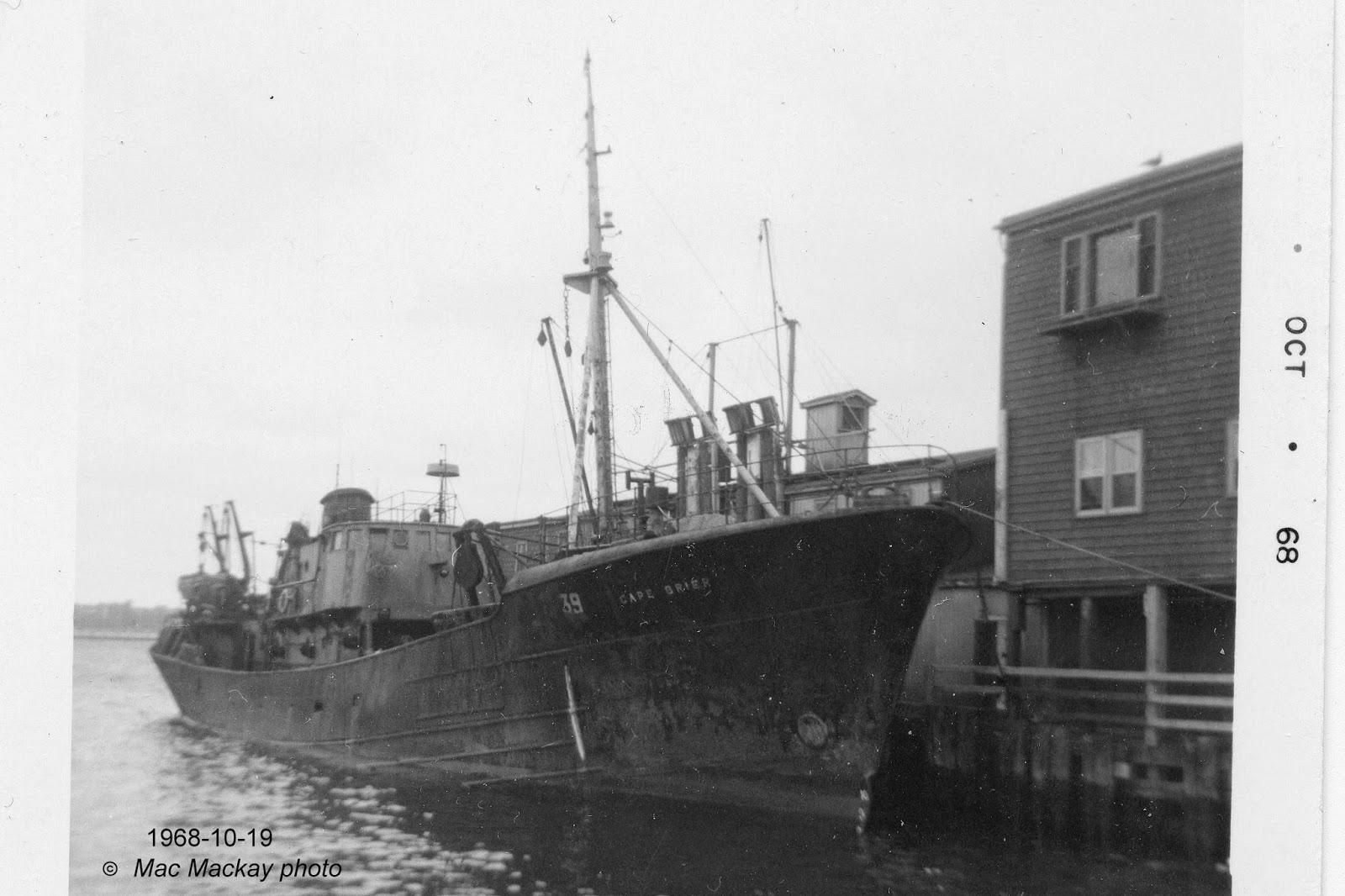 Cape Brier at the NatSea plant near the foot of Morris Street, known as the FasterFat division.

Cape Brier arrived in Halifax early in 1951 and made its first trip in mid-February. It was sold in 1969 and was more or less derelict in Halifax until 1974 when J.P.Porter + Co bought it and Cape Sambro for conversion to a bottom dumping spoil carrier for dredging and permission was granted to rename it J.P.P.No.601. Cape Sambro became J.P.P.No.600. The work was done at Dartmouth Marine Slips and at Porter's yard, but on completion they were laid up and never used by Porter. Work included cutting off the stern overhang, building a new deck house, installing a pair of 340 bhp GM engines and twin screws and installing hopper shaped holds and hydraulically operated bottom doors. They remained laid up in Dartmouth and were put up for for sale from August 1977. The Porter company, owned by Richelieu Dredging of Sorel, QC was implicated in a price fixing scheme for federal dredging tenders and was essentially shut down along with its parent, and liquidated. 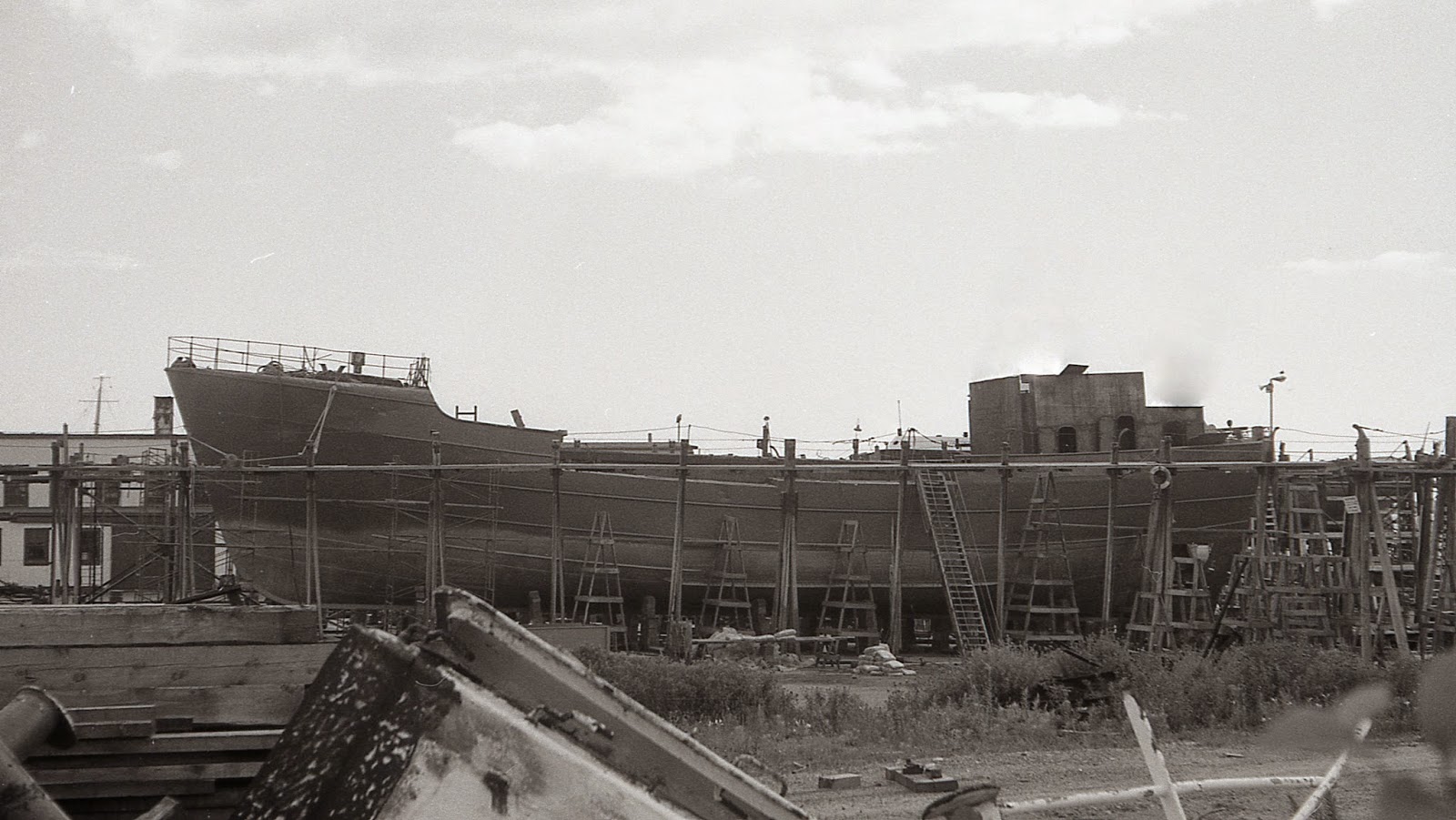 At Dartmouth Marine Slip, with the hull cleaned up and stern lopped off, work on the new superstructure has begun. 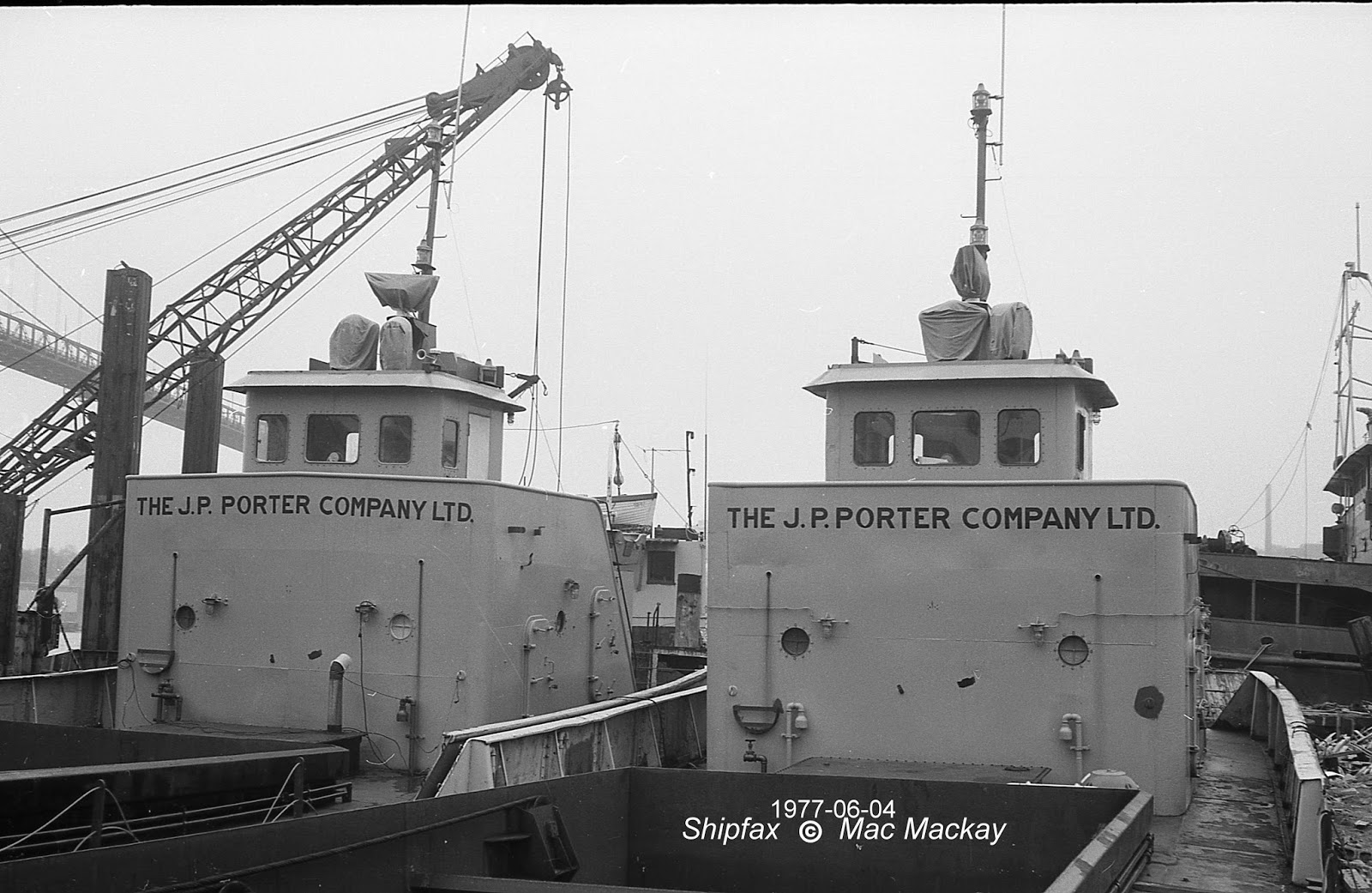 J.P.P.No.601 at left, and J.P.P.No.600 were laid up in 1974 and never used until sold in 1980. Note the slightly different bridge rails - one cambered and one horizontal. Rust streaks from the bridge drains streak the house. The hulls were painted green, the houses yellow 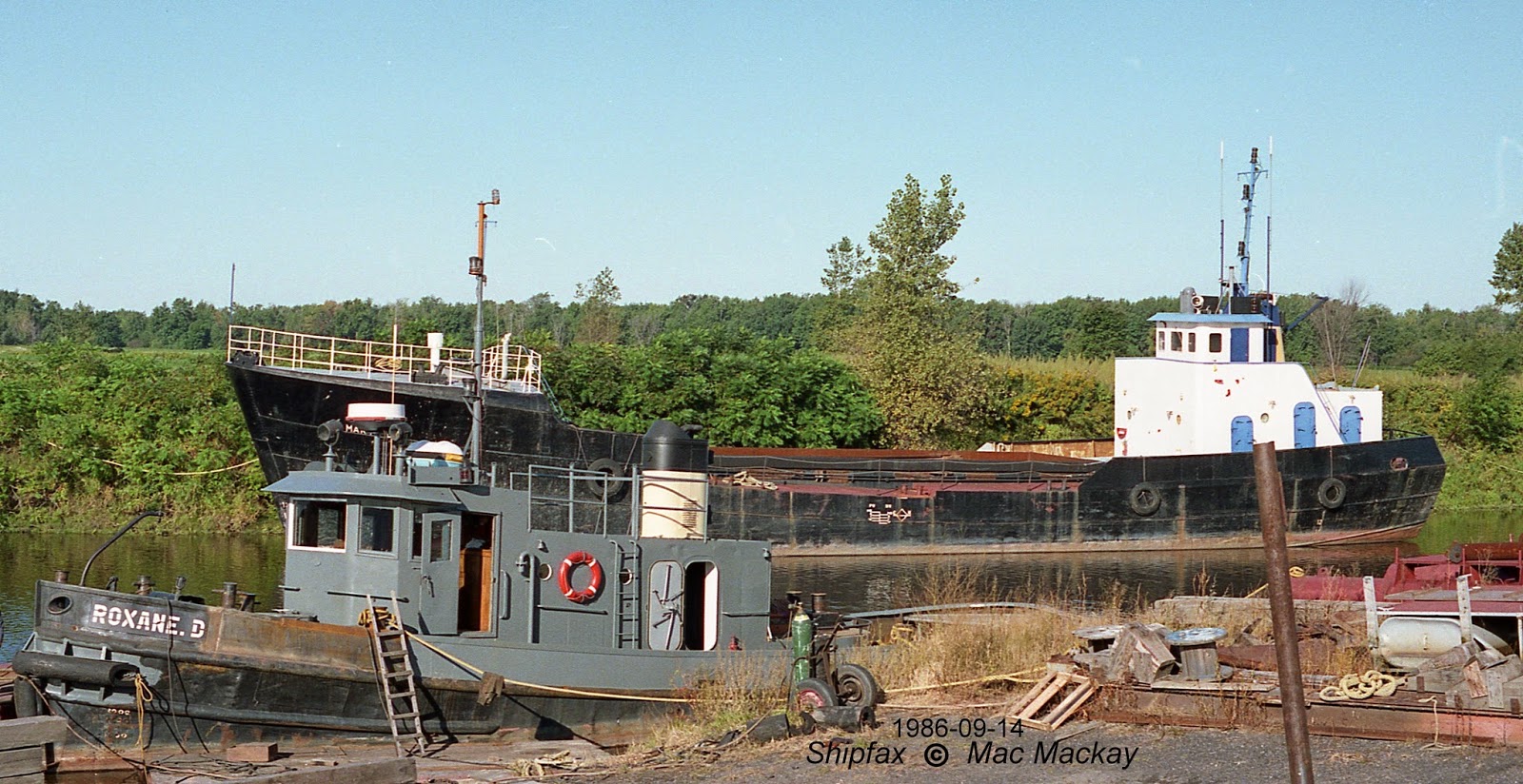 At Notre-Dame-de-Pierreville, Marie Lou is laid up opposite Artlac's shops in 1986.

Construction Canamount Inc of Montreal  bought the pair in 1983 and renamed them Marie-Lou (ex Cape Brier, J.P.P.No.601) Marie-Sol (ex Cape Sambro, J.P.P.No,600). They did some work for Canamount but were often seen laid up in Pierreville.

In 1990 the ownership was listed as CIBC Leasing, but this was a financing arrangement between McKeil Workboats of Hamilton, ON and Dean Construction of Windsor ON, to service a dredging contract on the Great Lakes. On June 26, 1990 they were reported upbound on the Welland Canal bound for Windsor. I have no details of where they  worked on the Lakes.
On May 5, 1992 they were downbound in the Welland Canal in tow of McKeil's tug Lac Manitoba for Hamilton. Once there workers cut the turtle back forecastle heads down to rail level and welded shut the bottom doors. Then on June 27 they departed in tow for Rochester and made their way through the New York State Barge Canal to the Hudson River and on to the Atlantic.

New owners, Unida Transportadora SA of Panama had bought the boats, registered then in Panama and put them to work as sand carriers. In 2010 ownership of Marie-Lou passed to Arenera Balboa SA, also of Panama City and as of 2014 they were both still operatonal.

CAPE ARGOS
Cape Argos  was completed in January 1952 and sailed for Halifax, arriving about February 15, and a newspaper photo on that day showed it heavily iced over. The boat was not drydocked after launch in Selby, and on arrival went to Dartmouth Marine Slips for bottom painting.Unlike the preceding two boats, it had a "cruiser" bow, instead of a bar stem, and carried 130 tons of fuel versus 100 tons. After drydocking, it was assigned to Lunenburg, but did return to Halifax from time to time, and was transferred back to Halifax in the 1960s. In November 1967 it was sold to Metal Processors Ltd of Sydney and was broken up there.

Cape Argos had the distinction of grounding on George's Island twice. First on March 23, 1964 and second on February 20, 1967. Both times it was in fog, and the ship fetched up in soft mud and was not damaged. The island was just off the wharf where these boats tied up, and as someone said "it is hard to miss". 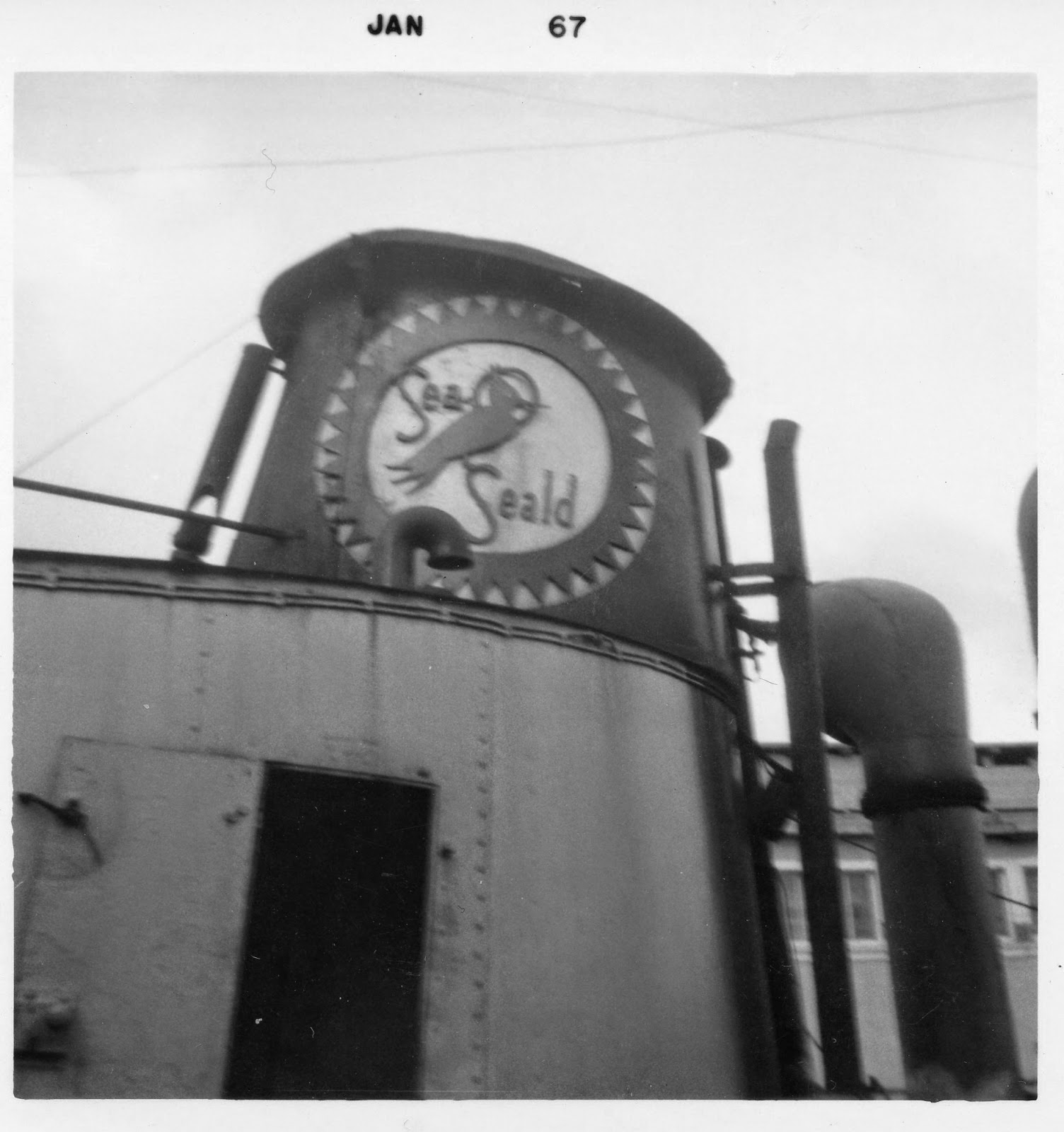 National Sea Products Ltd billed itself as the "The King Fishers of Canada" and used the bird on the funnels of its Halifax based trawlers and on their their Sea Seald brand fish products.

Cape Bonnie arrived in Halifax April 3, 1952 and also went to the Marine Slips for bottom painting on arrival. While all it sisters had incidents of fouled props or fuel shortages, Cape Bonnie seems to have been accident prone. In 1956 it had to be towed into port with engine trouble. In 1960 an injured seamen had to be evacuated at sea. (He was placed in a lifeboat, which was payed out 100 feet astern to allow the helicopter to airlift him. It could not lift him directly from the Cape Bonnie due to the mass of rigging.)
In 1963 one man died when a fish pen collapsed while at sea on George's Bank. In 1964 after another engine break down Cape Beaver attempted to tow it into Halifax, but the line  parted and fouled Beaver's prop. CCGS Narwhal and Cape Sambro assisted the tow for 100 miles back to Halifax.

Then on February 21, 1976 in extremely bad weather and at 0400 hrs, the boat ran onto the Sambro Ledges off Woody Island only a dozen or so miles from Halifax and was holed and quickly engulfed. The crew took to boats but all eighteen were lost before reaching shore. An inquiry found that a navigational error was to blame, but no one can know exactly how the boat came to run ashore. 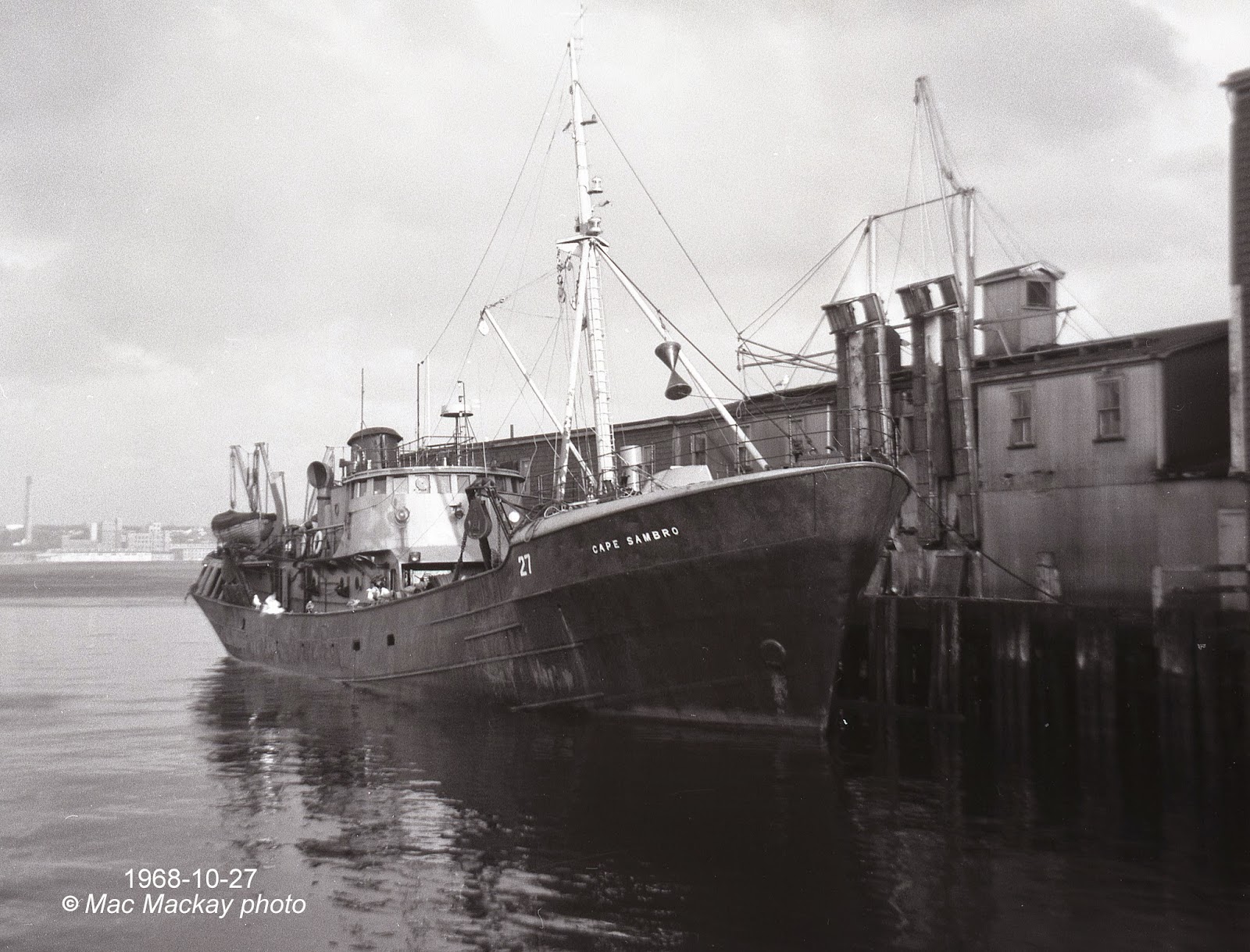 Cape Sambro looking quite neat with its black hull and navy grey superstructure, must have been fresh from a refit - it didn't usually look this good. 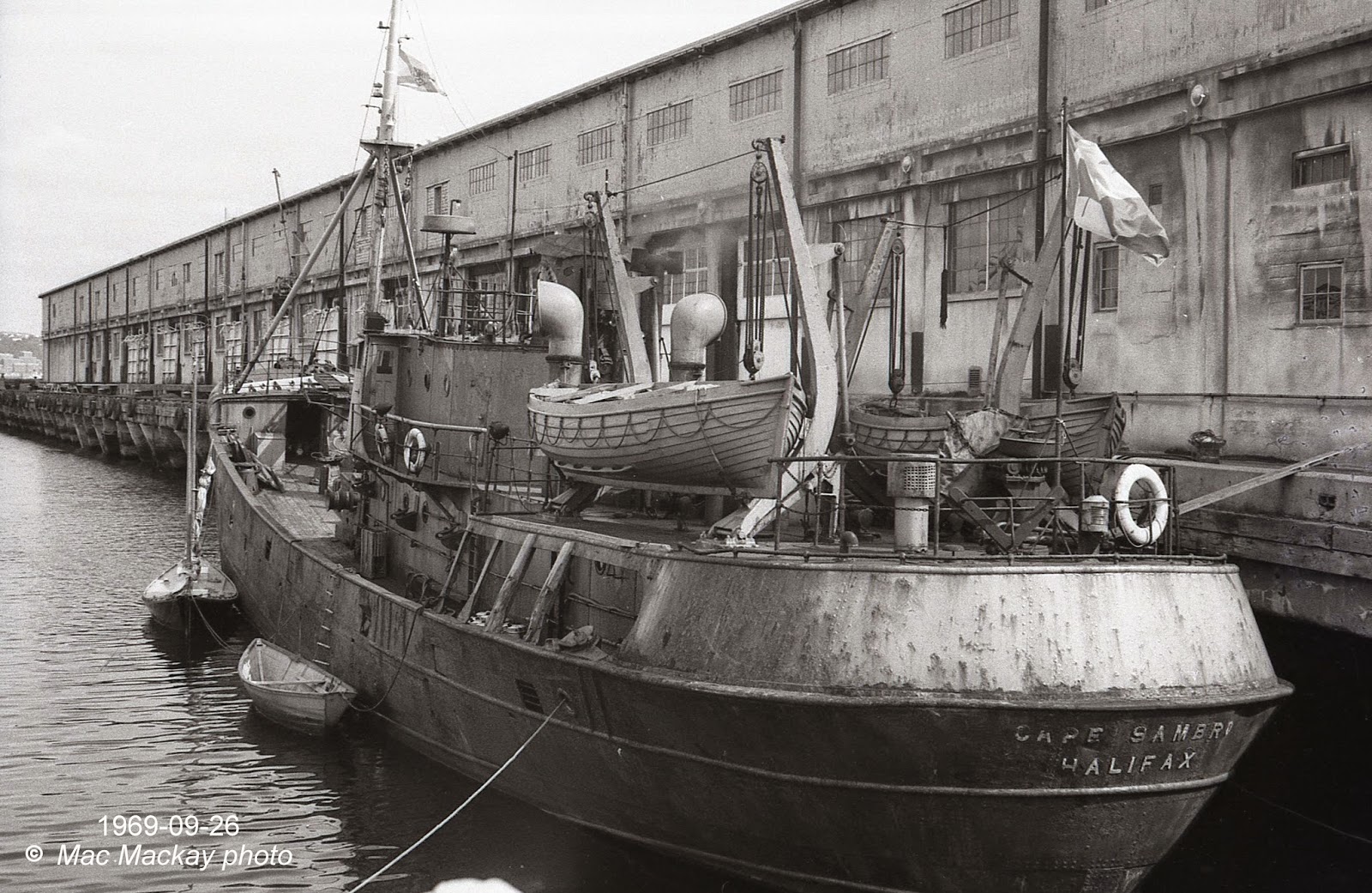 As a liveaboard, Cape Sambro grew quite seedy, but still showed off its fine lines.

The last boat in the series was Cape Sambro. It arrived in Halifax soon after completion in July 1952. There was no fanfare when it arrived and it seems to have fished more or less anonymously until 1966. It then became a fixture on the waterfront as a liveaboard, moving around from pier 2 to various free berths until 1974 when purchased by J.P.Porter + Co. Its career than exactly paralleled sister Cape Brier, and is related in the entry above. 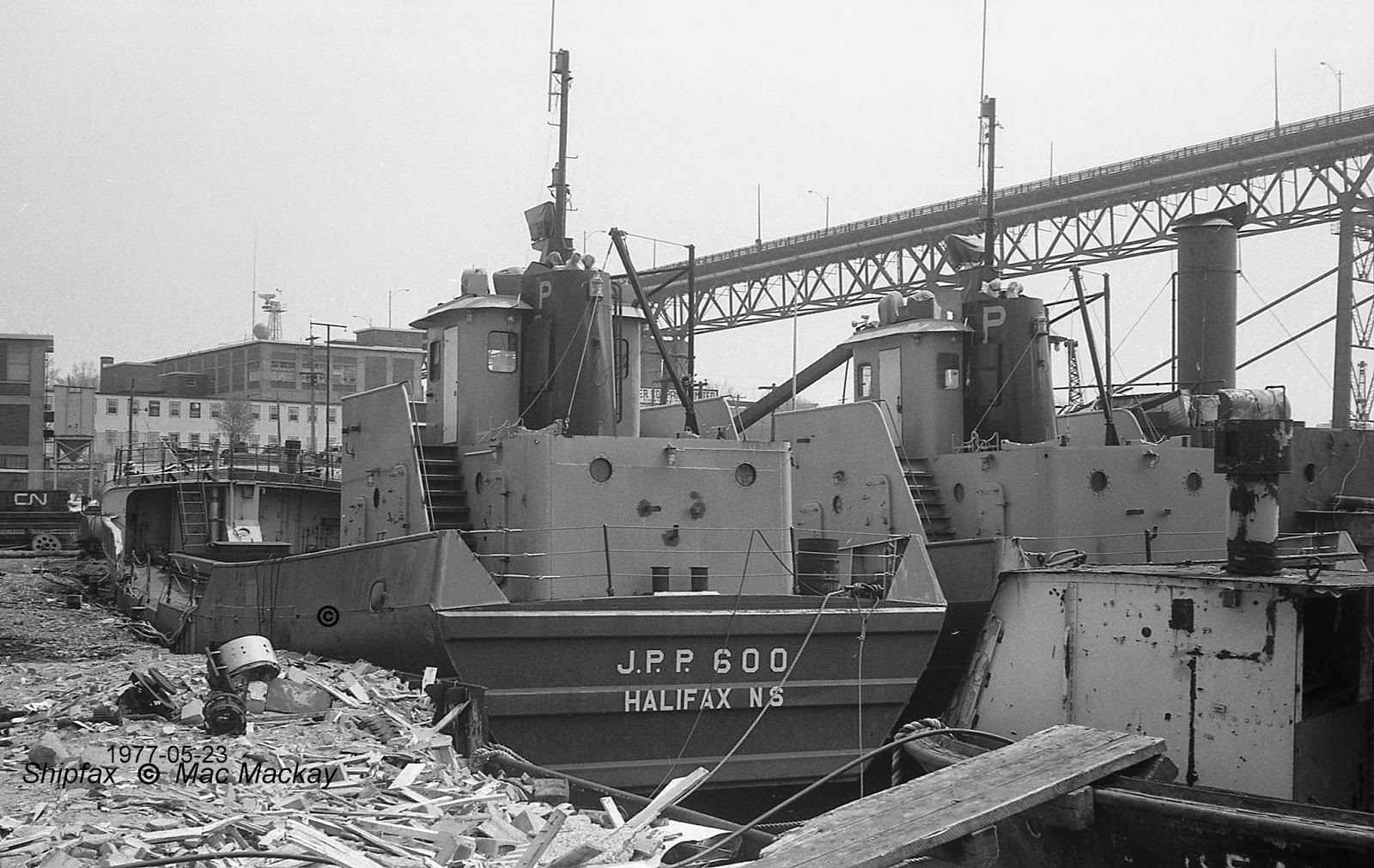 The conversion involved cutting off the original round stern and installing a square transom, with towing bitts for handling scows or dredges. The funnel was green with a yellow letter "P". That is Cape Beaver's stern in the right foreground, partially dismantled. 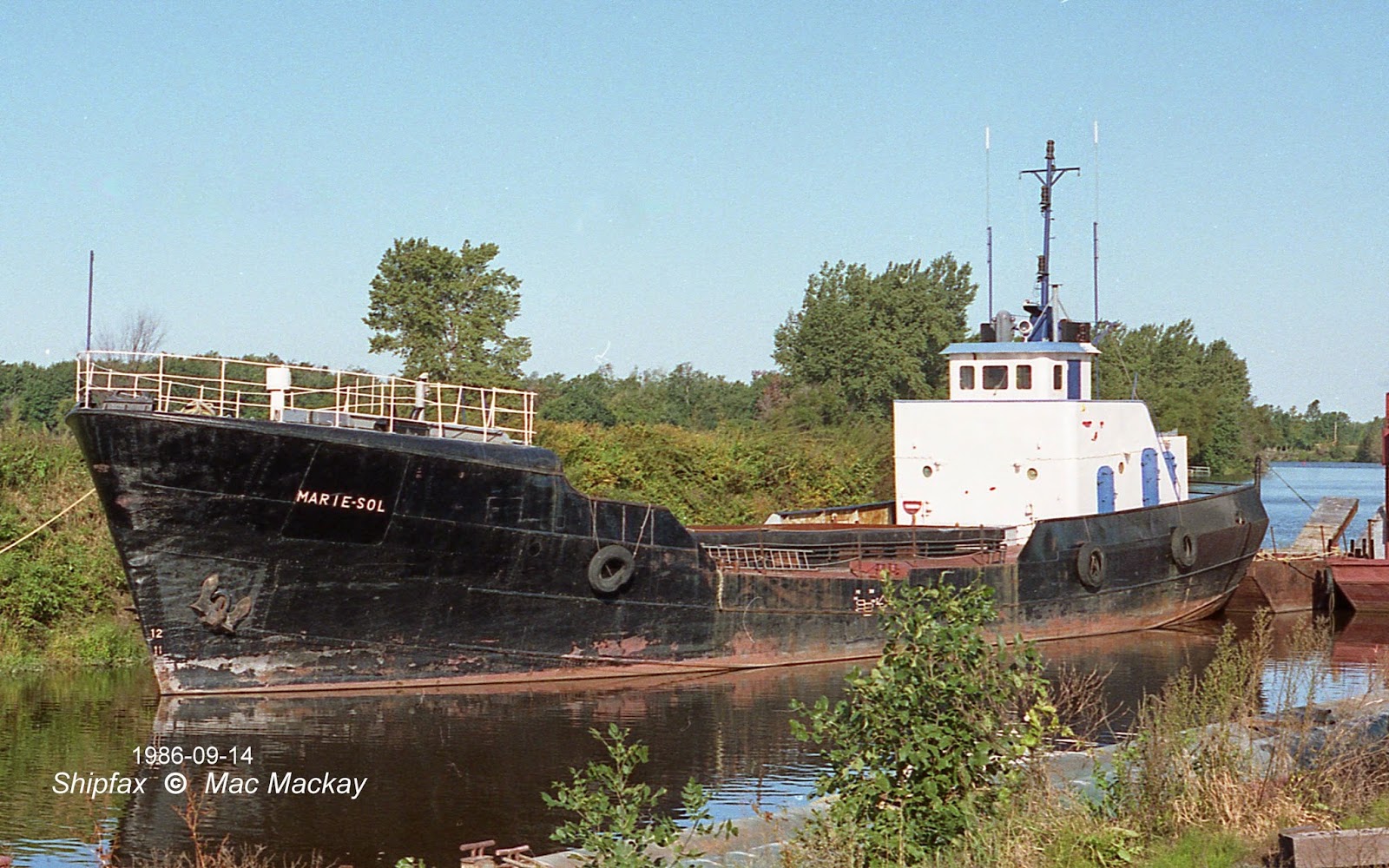 Marie-Sol idle at Notre-Dame-de-Pierreville. It later lost the turtle back forecastle head before heading south.

As more modern diesel trawlers came along in the early 1960s and stern trawlers in the mid 1960s, the steamers became much less efficient fish catchers. Crews were hard to attract, since they worked on shares, and wanted to be on boats with bigger catches. These well built steamers were no match for the newer boats and were allowed to run down and as trawlers only lasted 15 or so years. However if two hulls are still providing useful service after more than 60 years, it would be a tribute to their builders.
Cochrane + Sons Ltd no longer exists, but many fine examples of their product are still at work.