The saga of the Dalia D.

The saga of the Dalia D. began March 16, 1982 in an ice choked Gulf of St.Lawrence. The small general cargo ship was en route to Belledune, NB to load fertilizer when she became beset in ice. 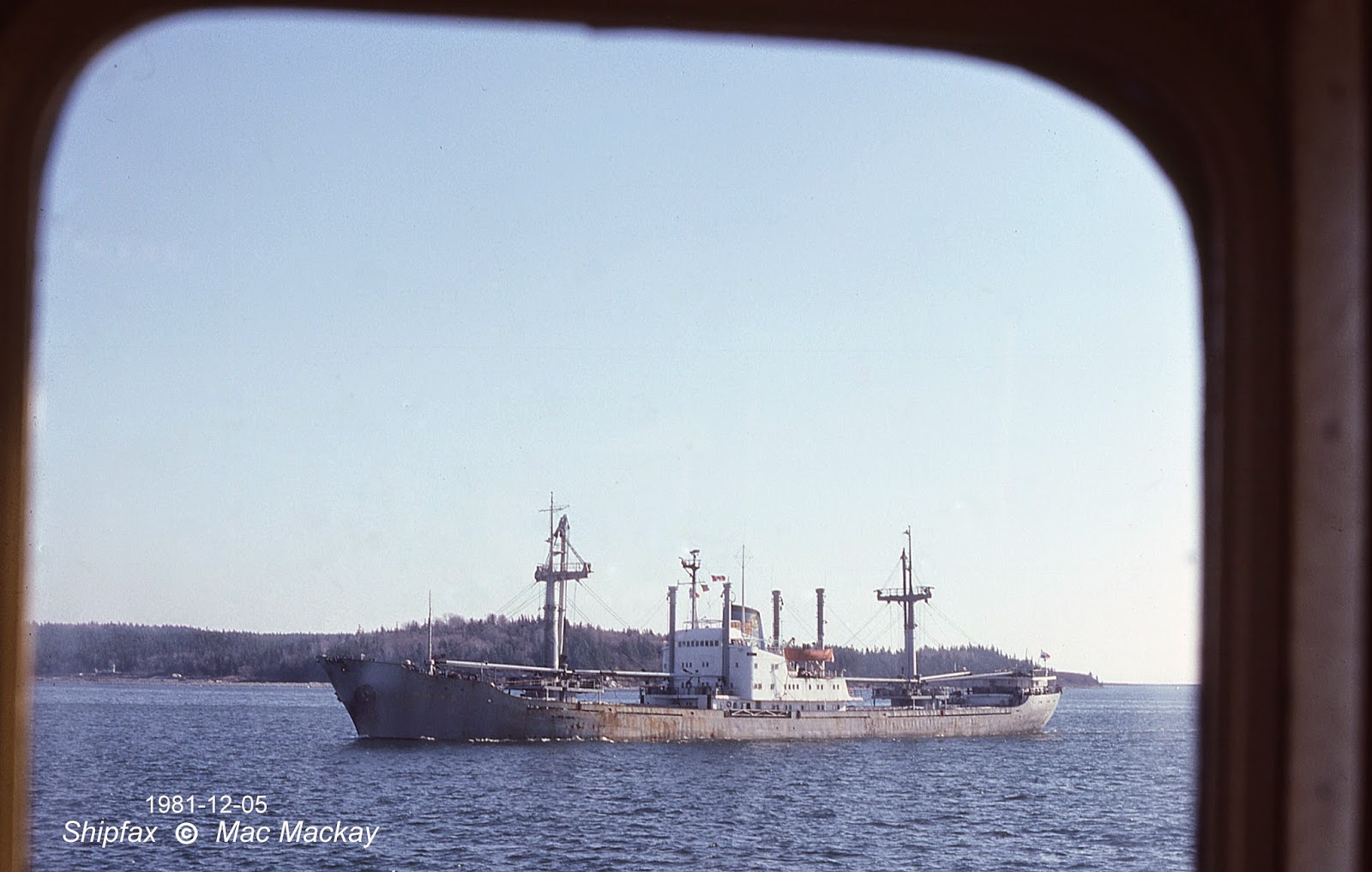 Dalia D. seen from the wheelhouse of the tug Point Vibert as it arrived in Halifax in December 1981. The ship was southbound after loading fertilizer in Belledune, but was to return for one more trip.

The ship was built by Blohm+Voss in Hamburg, Germany in 1961. Built on traditional lines, with engine and accommodations amidships, it was equipped with a complete array of cargo handling derricks, consisting of twelve 5 ton, one 15 tonne for hold number number 4 and one 60 ton for hold number two. It measured 4808 grt and 6820 dwt. Originally named Najade for German owners, it passed to Greek owners in 1973 and 1981 was sold to Melos Shipping NV of Greece, and assigned to a single ship company Altis Maritime Co SA of Panama and renamed Dalia D.


The same owners, part of the the Melo chocolate business,  also owned a similar sized ship Begonia D. (built by Orenstein +Koppel of Lubeck in 1959, it measured 5373 grt, 6983 dwt. Built as Arauco for Chilean owners, from 1970 to 1980 it sailed as Voulla for Cie Maritime de l'Afrique Noire under the flag of the the Ivory Coast. Melos acquired it in 1980 and assigned it to Thorax Cia Naviera SA of Panama.)

Dalia D. had sailed from New Orleans for Belledune - in the worst time of the year for ice - and when in position 47.56N x 62.15 W, north of the Magdalen Islands, the ship took on a severe list while in pack ice. The 27 crew were taken off by CCG helicopter and the ship abandoned.

Atlantic Towing's Irving Maple was soon on the scene and was joined by Irving Birch, and the ship was very quickly towed through the ice to Gaspé, where it was tied up March 20 until a salvage claim could be settled. The salvors also managed to correct the list, and the ship was no longer taking water. 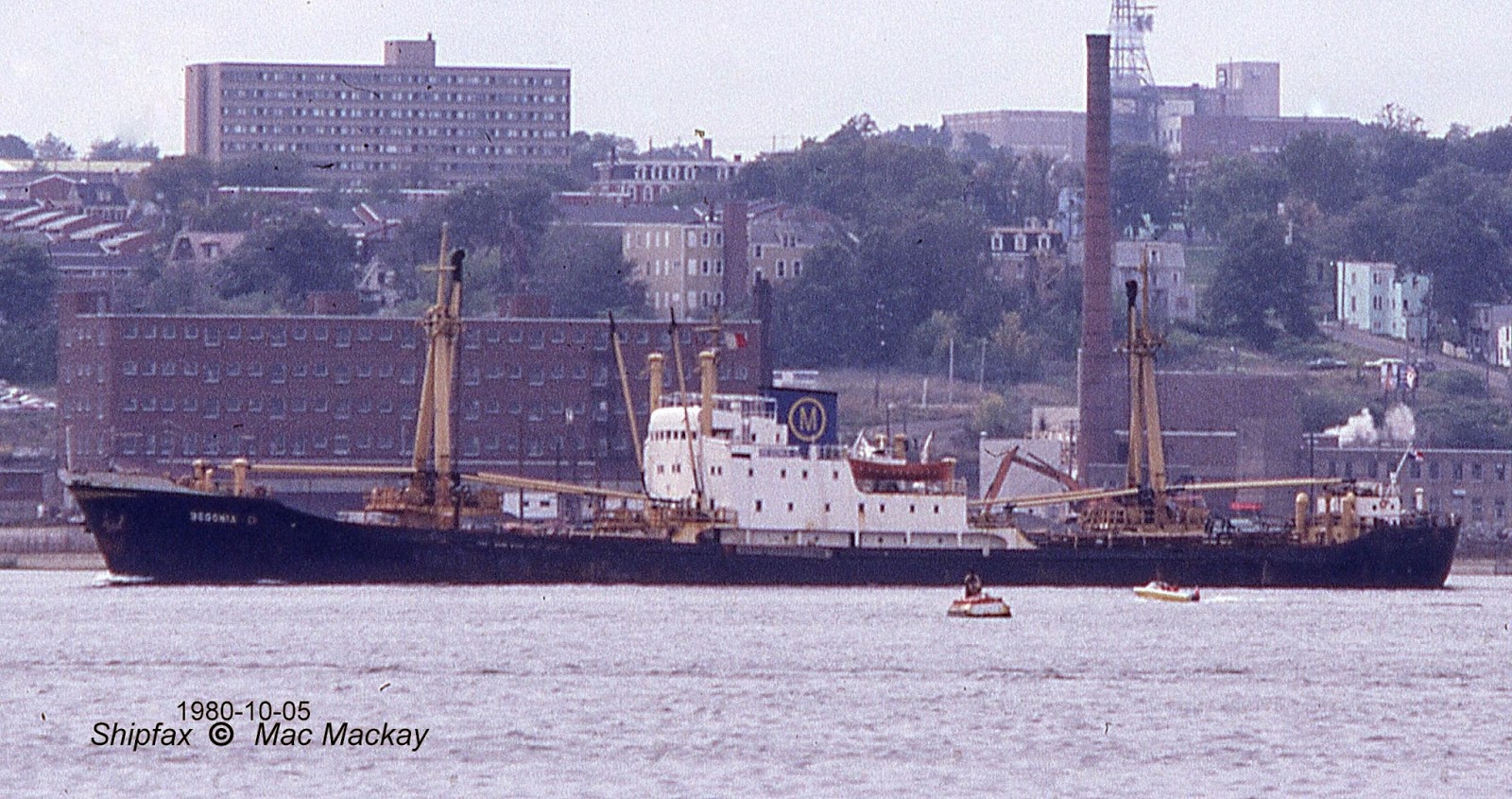 This was not the end of trouble for the Melos interests. On September 7, 1982 Begonia D. struck the wreck of Marianna off Naxos and then ran onto Amaridhes Reef, in the Paros-Naxos Strait. She was refloated September 9 and towed to Chalkis where she was declared a total loss and subsequently broken up.

The salvage claim for Dahlia D. was a long drawn out affair, and by late autumn Melos regained control of the ship, but it was not until December that a crew was sent out to make it ready for sea again. It was reported that some looting had taken place on the ship, but in any event it had suffered from neglect for nine months and was in poor condition. 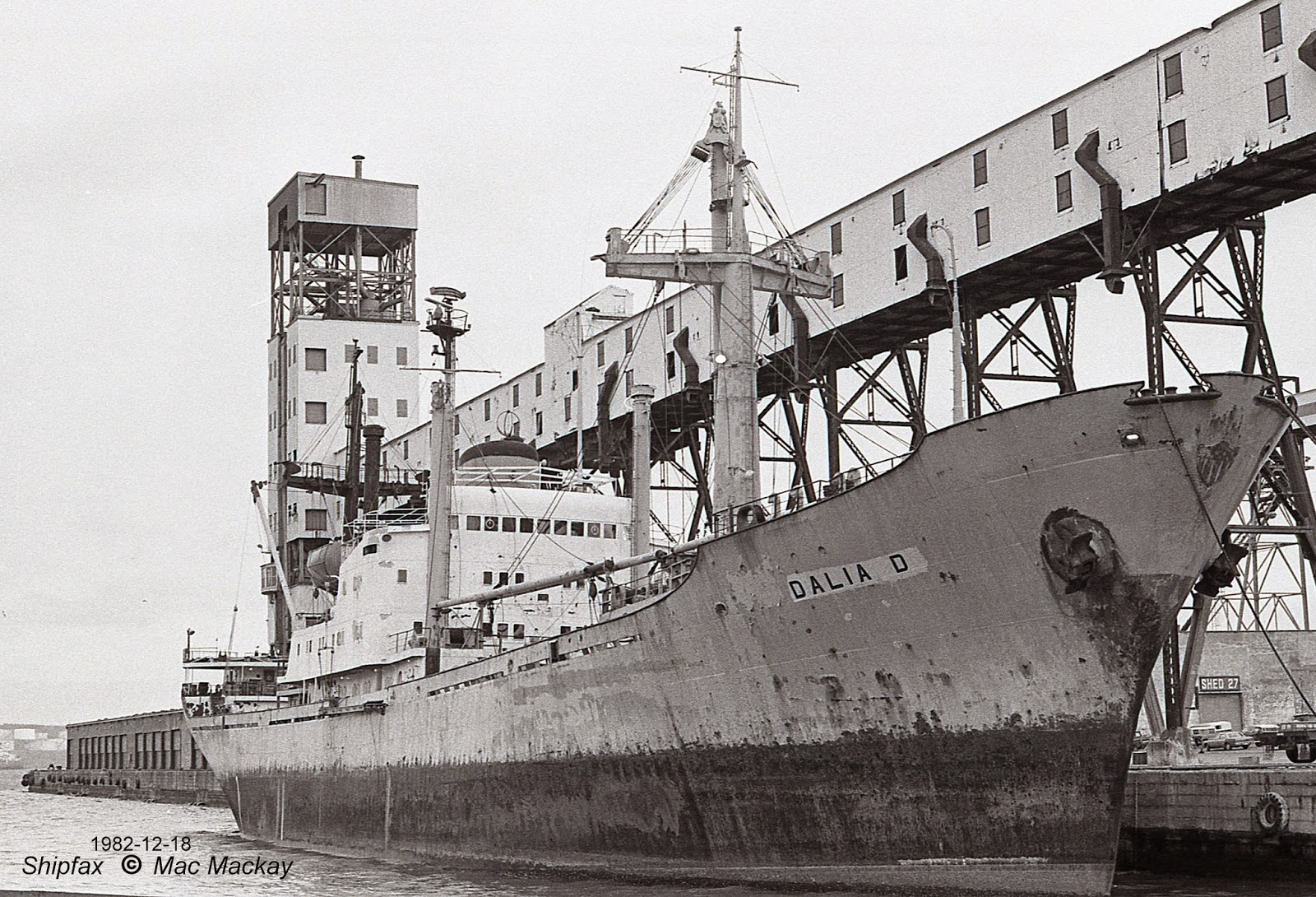 Dalia D. shortly after arrival in Halifax in December 1982.

What followed can only be described as heroic efforts by a small crew of Greek engineers and Philippine seamen to get the ship back in operation. Work included changing a propeller while the ship was still in the water. 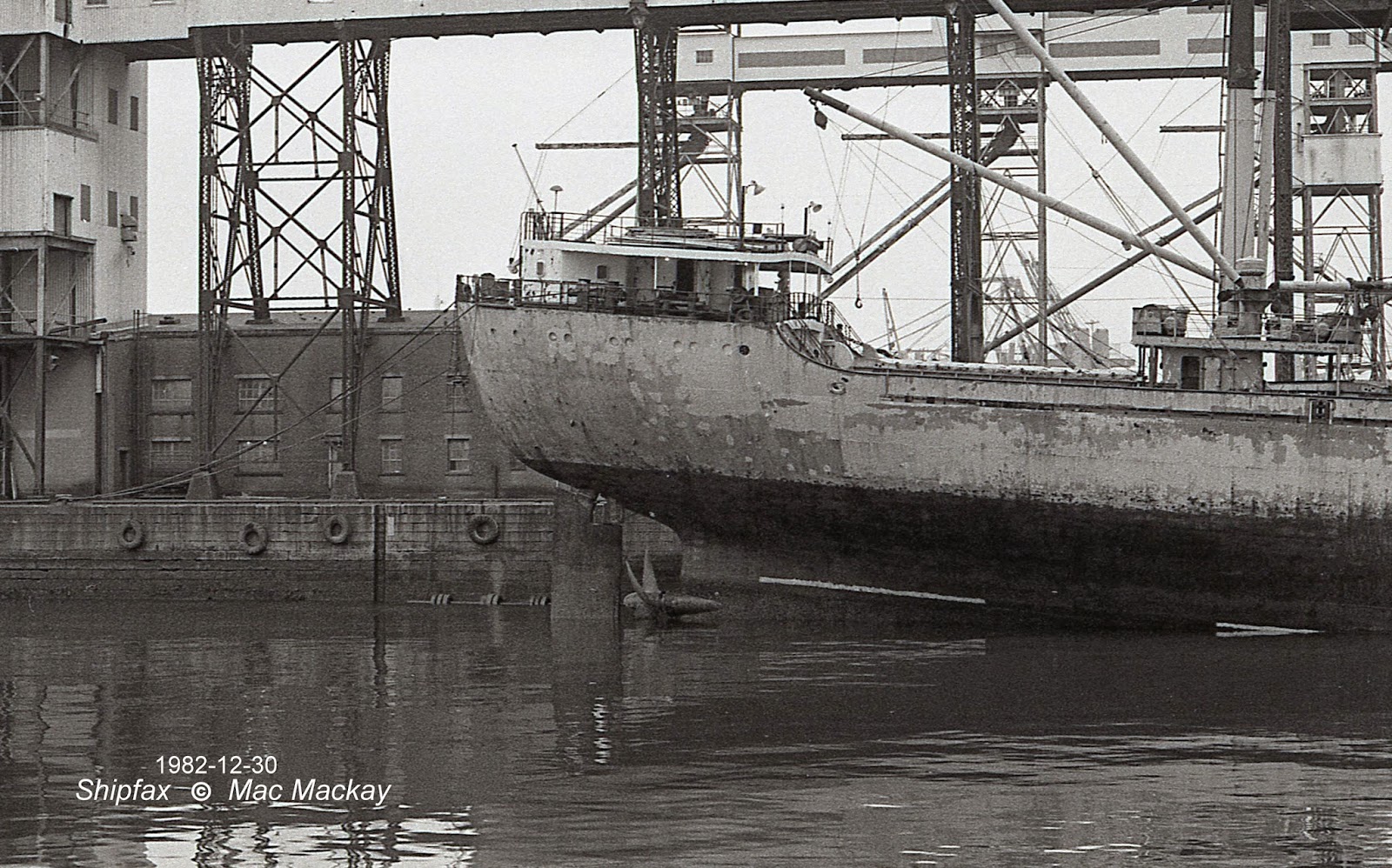 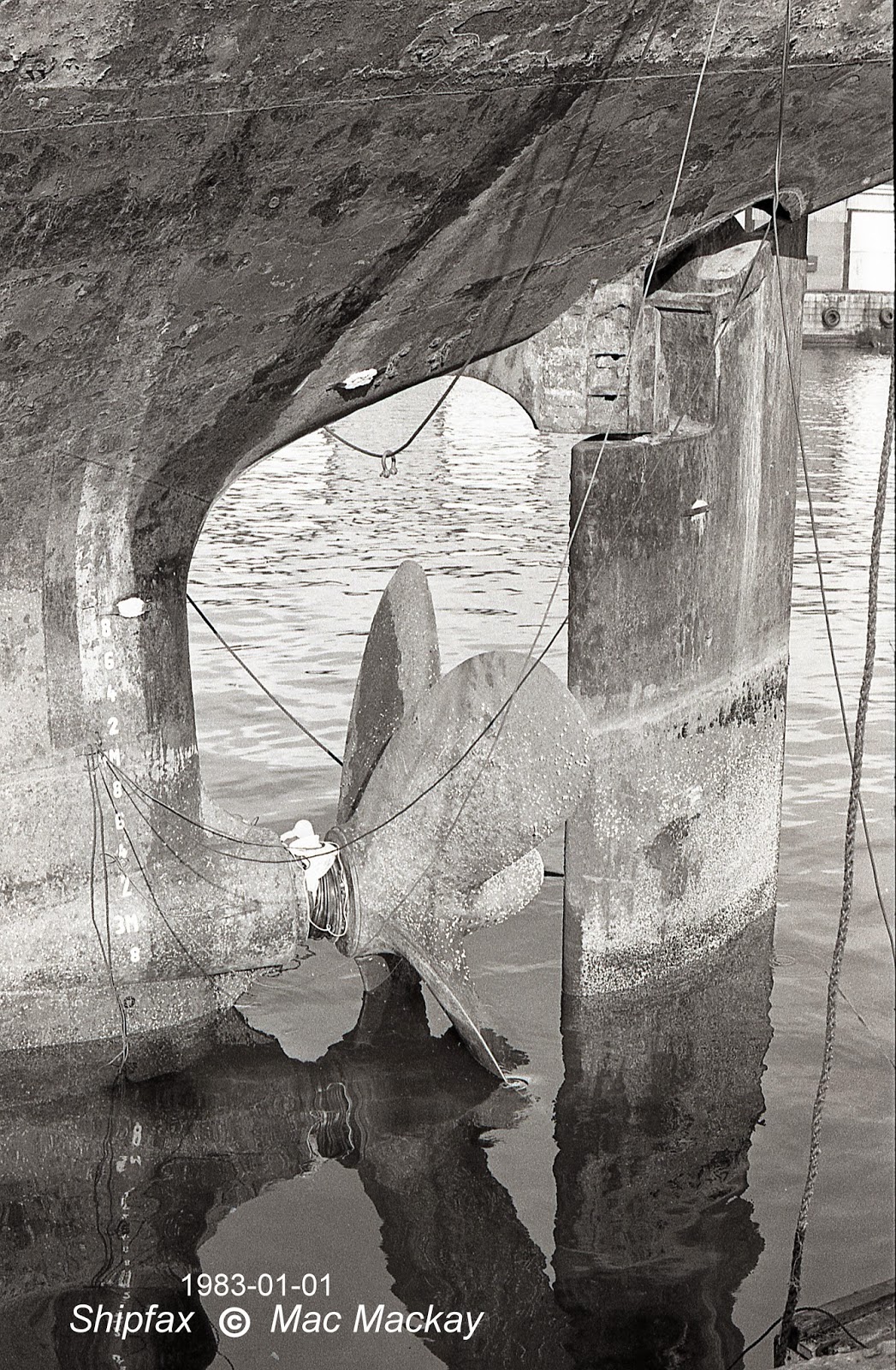 The engineer had been using an electric hair dryer to soften up grease to sett the prop moments before I came along to take this picture.

Melos had incorporated Orbit Shipping Co Ltd in Panama to own the ship and renamed it Orbit soon after arrival in Halifax. After weeks of work, the ship was again ready to sail on its own and left Halifax February 28, 1983. 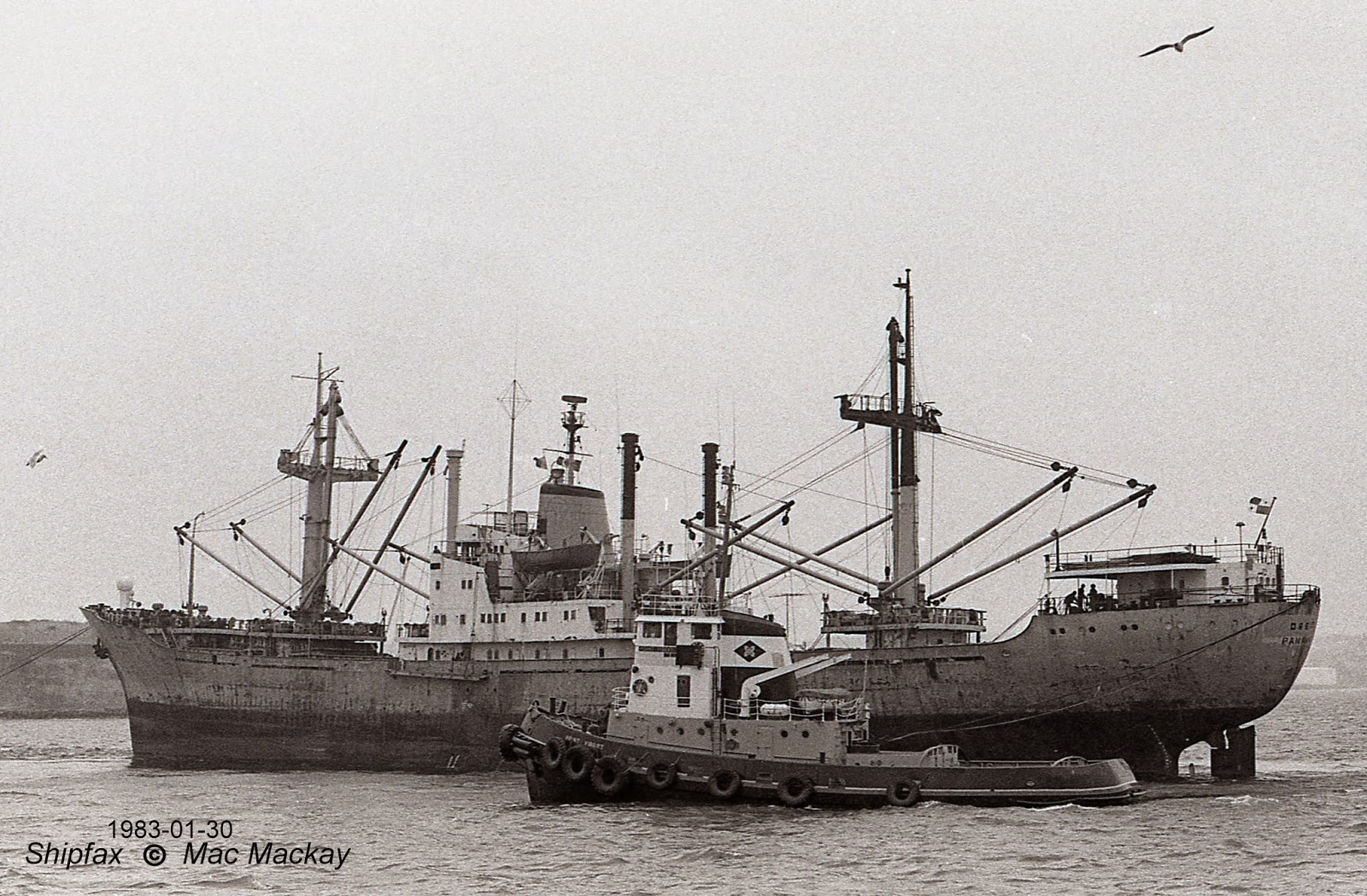 The tug Point Vibert nicely blocks a view of Orbit as it is moved from one berth to another during its stay in Halifax. Point Vigour has the bow line.

In 1986 the ship was sold to Topor Ship Co of Panama and renamed Topor 1. It worked its way to Chittagong, arriving December 18, 1987, where it was soon broken up.