One of the largest Canadian bankruptcies was that of the Come-by-Chance refinery in Newfoundland. Developed by Shaheen Natural Resources Ltd of New York, with the input of massive amounts of public money from all levels of government, the project was fraught with political controversy from the beginning. The brainchild of Newfoundland premier Joseph R. Smallwood, and John Shaheen, the project (and many others too numerous to mention) was intended  bring industrial wealth to an impoverished province, but its $500 mn failure threw hundreds out of work and uncovered questionable dealings by those in positions of responsibility.
As with several of these Newfoundland projects there were ships involved, and they were also displaced and some had to be sold at a loss.

Most impacted by the shipping losses was the British company Common Bros. of Newcastle. They had built three tankers and two cargo ships to serve the refinery and its spin-off, Newfoundland Pulp+Chemical Co.
Common Bros was founded as the Hindustan Steamship Co in 1893 when J.W.Squance and F.J.Common acquired a ship called the Hindustan. When Capt. Squance retired the sons of  F.J. Common renamed the company. Their ships thereafter usually carried "stan" names.However to provide ships for charter to the Shaheen Natural Resources project, they were obliged to recognize the influential politicians of the province.

The first two tankers were named Joseph R. Smallwood and Frank D. Moores (the premier of Newfoundland and his successor respectively) . With the failure of the refinery project they were re-deployed by Common Bros. The Smallwood becoming the Afghanistan and the Moores the infamous Kurdistan.

The two cargo ships built by Robb Caledon, in Dundee Scotland, were mainly to be newsprint carriers. The names selected for the ships were also freighted with political significance, but there was a problem. The cargo ships were to be named after the spouses of the premier and former premier, but  as recounted by Roy McMurty in his autobiography, Premier Moores was "between wives" and it was not possible to name one of the ships for his spouse, since he currently did not have one. It would never do therefore to name the other ship after former premier's Smallwood's wife if there could be no balancing "first lady." It was then decided to name the ships after the wives of the premiers' top advisors. 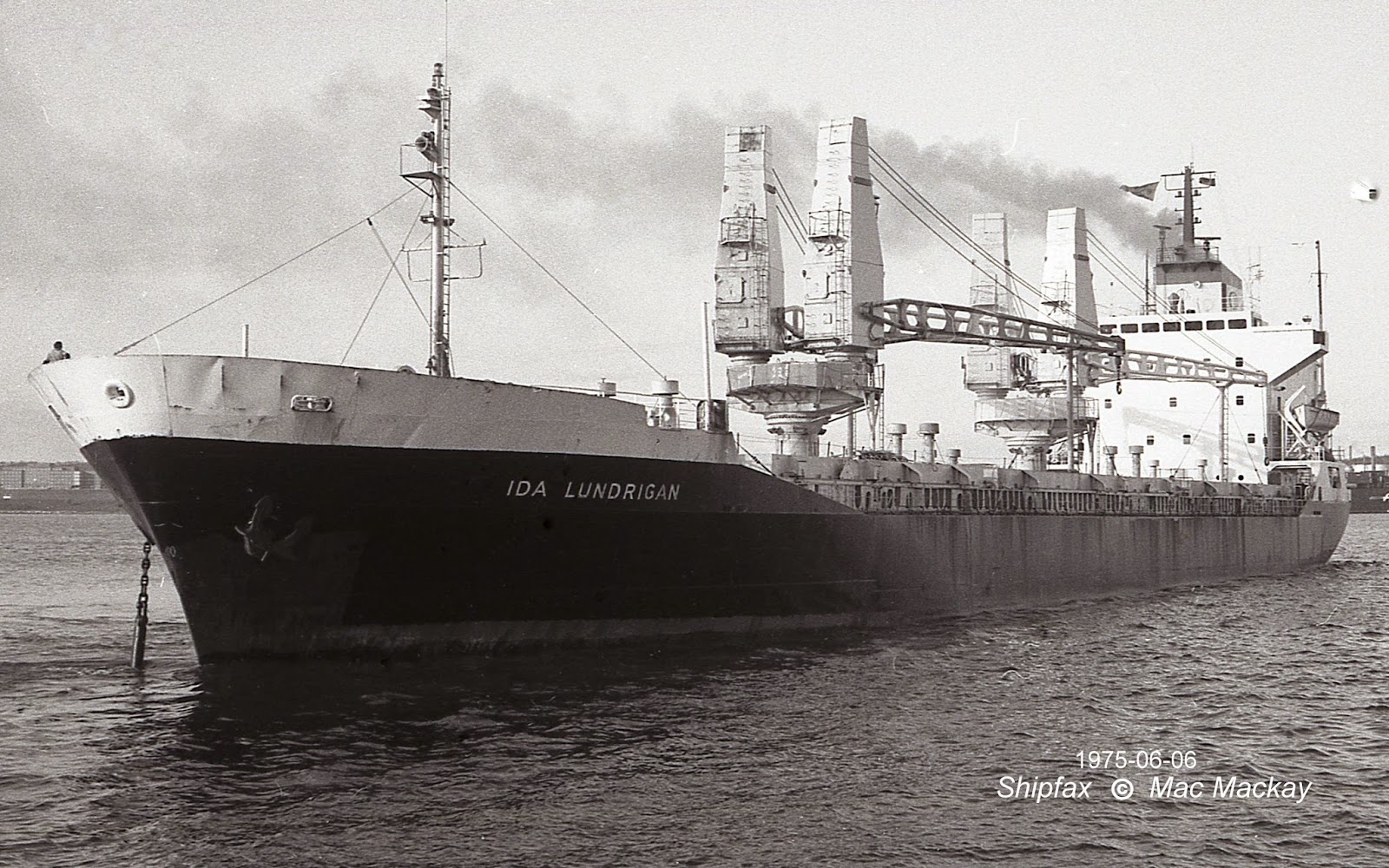 The first ship was therefore named Ida Lundrigan for the wife of Arthur Lundrigan, a Newfoundland contractor and industrialist and important adviser to former Premier Smallwood. (Mrs Lundrigan (née Johnson) was not related to Mrs. McMurtry, but the two ships were sisters.) It was christened in Dundee March 14, 1972 and completed November 17, 1972. 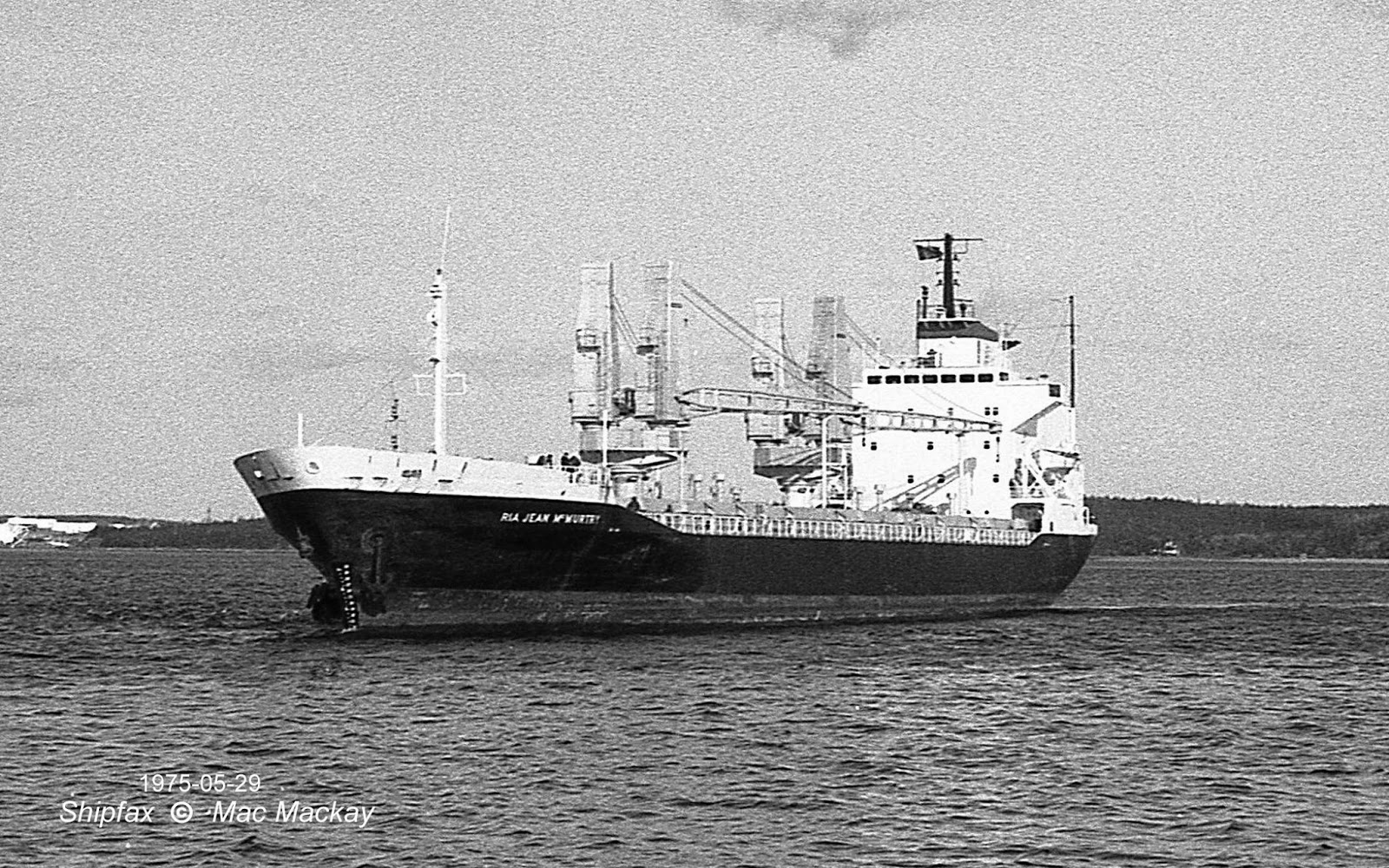 Premier Moores decided, at the last minute, when the shipyard yard was pressing for a name that the second ship should be named after the wife of Ontario Tory politician Roland "Roy" McMurtry a political mentor of premier Moores. The ship was christened October 24, 1972 by 14 year old Janet McMurtry daughter of Ria Jean McMurtry (née Macrae) and completed May 11, 1973.

Of course Mrs. Smallwood was given another chance when a new Marine Atlantic ferry was built for the Sydney-Argentia service. It was, at the insistence of the former premier, named Joseph and Clara Smallwood. Mr. Moores was reputedly not "lucky in love", though not for want of trying, and so no spouse of his was honored as namesake of a ship. 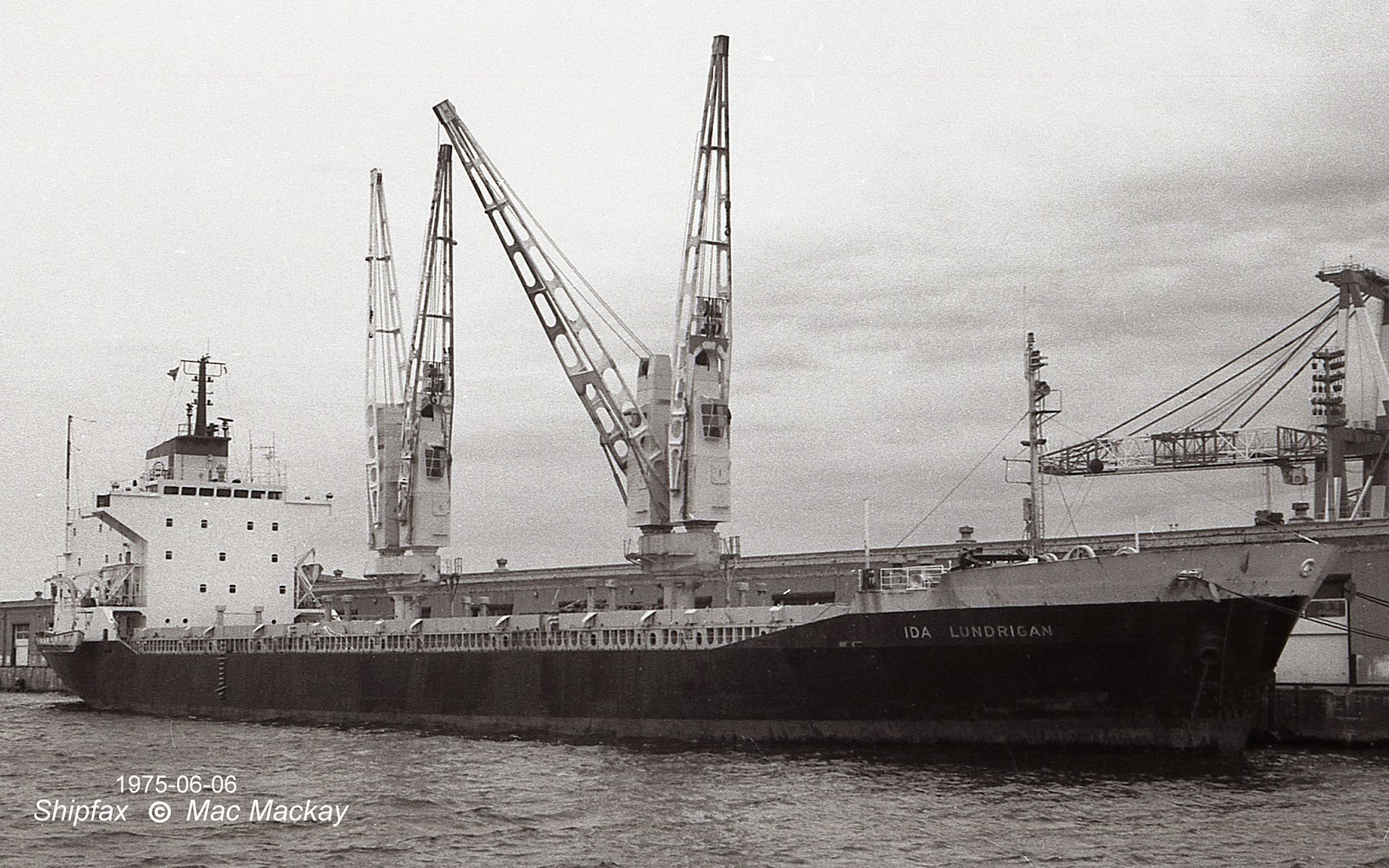 Measuring 7100 grt the ships were fitted with two pairs of large deck cranes of 12.5 tonnes capacity each,  that could each swivel, but so could the base, so they could serve the holds singularly or together. The ships' dwt varied slightly, with the Lundrigan coming in at 9,792 and the McMurtry at 9,637.


Following the bankruptcy of the refinery project, Common Bros found other charter work for Ria Jean McMurtry, and it was renamed City of Pretoria in 1976 and Simonburn in 1977. They sold the ship in 1979 to Vast Shipping and it was registered in the Jersey Islands, becoming Gomba Challenge in 1979. In 1980 it changed owners again, to Challenge Shipping Ltd (Greek flag) and was renamed Ocean Challenge. moving soon after to Panama flag. It was under that name that it arrived in Halifax again, this time in tow of the tug Pointe aux Basques, assisted by Point Valiant (i) April 16, 1985 and tied up at Halifax Shipyard for repairs.It was able to sail on the 27th for La Guaira, Venezuela.

It then went through a bewildering array of subsequent names 85: Fernao Gomes, 94: Fusaro, 95: Gido, 96: Kianda, 97: CEM Pumper, 00: Sofia G., 02: CEM Adriatic 03: CEM Rol, 09: Adriatic Arrow. As the last few names imply, the ship was converted to a cement carrier. This involved removal of the ship's cranes and installation of an unloader mounted on deck amisdhips. It was while loaded with bulk cement on May 28, 2010, outbound from the port of Khor Al-Zubair, Basra, Iraq that the ship ran aground and became stranded. Declared a constructive total loss it was eventually salavaged and taken to Gadani Beach, Pakistan for scrap, arriving March 3, 2011. 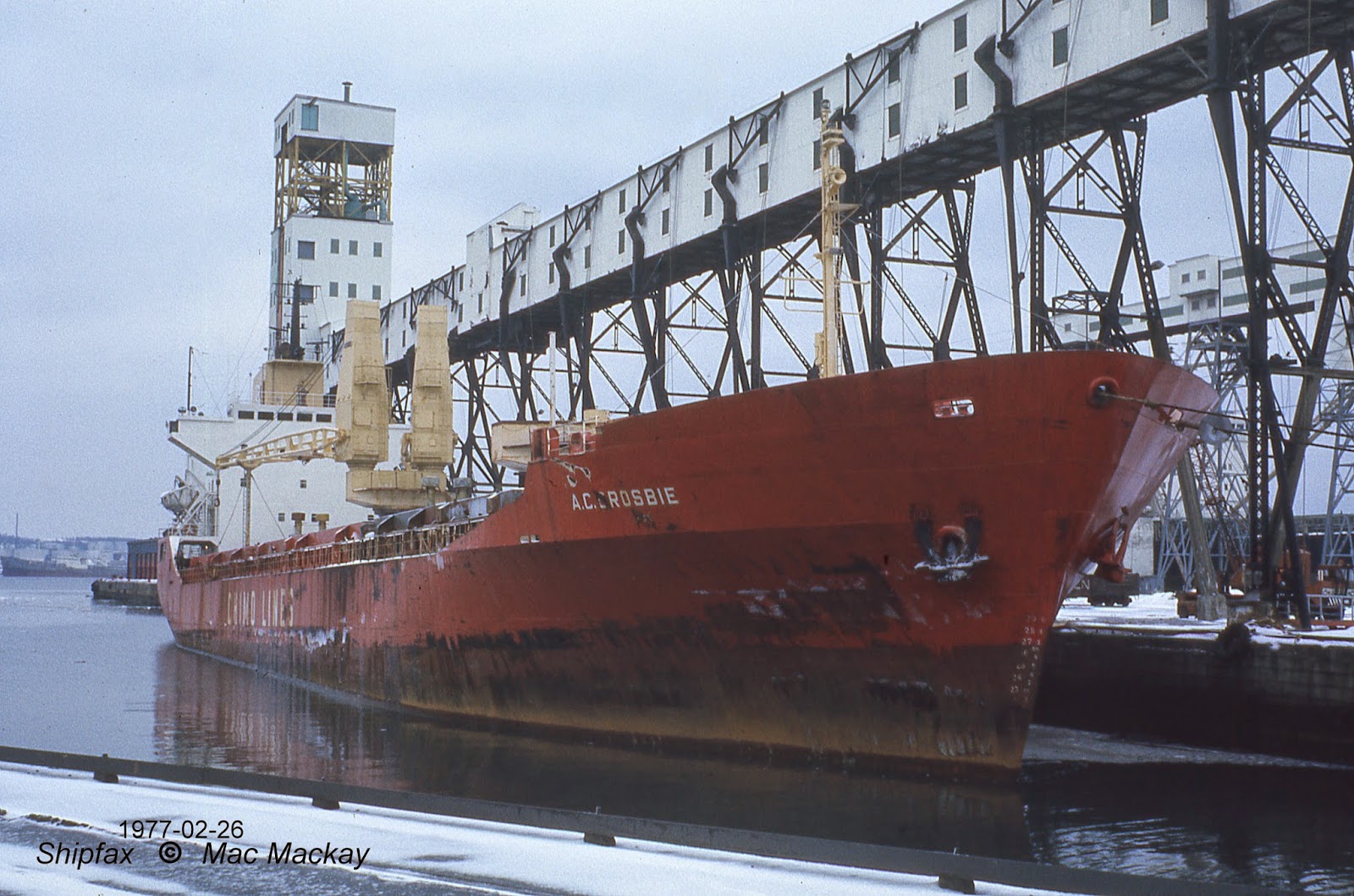 A.C.Crosbie lost its pair of foreward cranes through some mishap and operated with out them for a considerable time.

Ida Lundrigan however was sold immediately after the bankruptcy to Chimo Shipping Ltd in 1976. Chimo was the shipping arm of the Crosbie family, and the ship was renamed A.C.Crosbie after Andrew Carnell Crosbie. (He was the brother of John Carnell Crosbie, a Tory politician who had disagreed with Joey Smallwood over the Shaheen deal, crossed the floor of the legislature and sat as a Liberal. He then moved on to federal politics holding many Liberal cabinet posts, and after retirement was named Newfoundland's Lieutenant Governor.) Brother Andrew however remained loyal to the Tories, and good thing too since Chimo had important shipping contracts with the government and was also active in the offshore supply business.

In 1980 the ship was sent to the Versatile Vickers shipyard in Montreal for a $1.5 mn conversion to a fully cellular container ship to operate on Chimo's Montreal-St.John's service. Unfortunately Chimo chose August 1981 to go bankrupt and Vickers was never paid for the work.

Footnote:
Common Bros was not the only marine company to suffer from the bankruptcy of the Come-by-Chance refinery. Smit+Cory International Port Towage provided four tugs at Come-by-Chance and they were out of work as of December 1976, and were sent to Halifax.

It was wall to wall tugs at ECTUG when the four Come-by-Chance tugs  were laid up. Six other tugs were also using the dock.
l. to r. Point Vigour, Point Valiant (i), Point Vibert, (Point Vim - not visible)  Point Victor , Point Viking, Point James, Point Gilbert, and  Point Spencer.  Point Valour and Point Carroll were absent. See Tugfax for more on this.
.