Upper Lakes Group was not the only shipbuilder to convert existing bulk carriers to self-umloaders, nor the only ones to innovate. Canada Steamship Lines, through its offshore subsidiary CSL International also converted a bulker, but perhaps in a more restrained manner than ULS.

The ship was built orginally as Pacific Peace by Govan Shipbuilders Ltd in Scotland for Movex Ltd, which also used the name Lombard Discount Ltd. It was launched October 15, 1981 and measured 38,408 grt, 66,844 dwt - Panamax size. It was powered by a 15,400 British built J.G.Kincaid engine.
After five years of trading under the UK flag, CSL 's Ocean Lines Ltd purchased the ship in 1986 and reflagged it to the Bahamas. They renamed it Atlantic Huron (ii) and operated it as a gearless bulker, intending to send it to Korea for conversion to a self-unloader.

However the shipyard Verolme do Brasil, near Rio de Janeiro, had better terms. In the fall of 1987 most of the self-unloading equipment had been fabricated in Canada and was loaded aboard the Woodland (the former CSL ship French River) and shipped from Toronto to Brazil.
The converted ship was delivered in September 1988 and headed directly to Halifax for drydocking. Its tonnages changed somewhat as a result with grt appearing as 37,959, but deadweight remained the same. 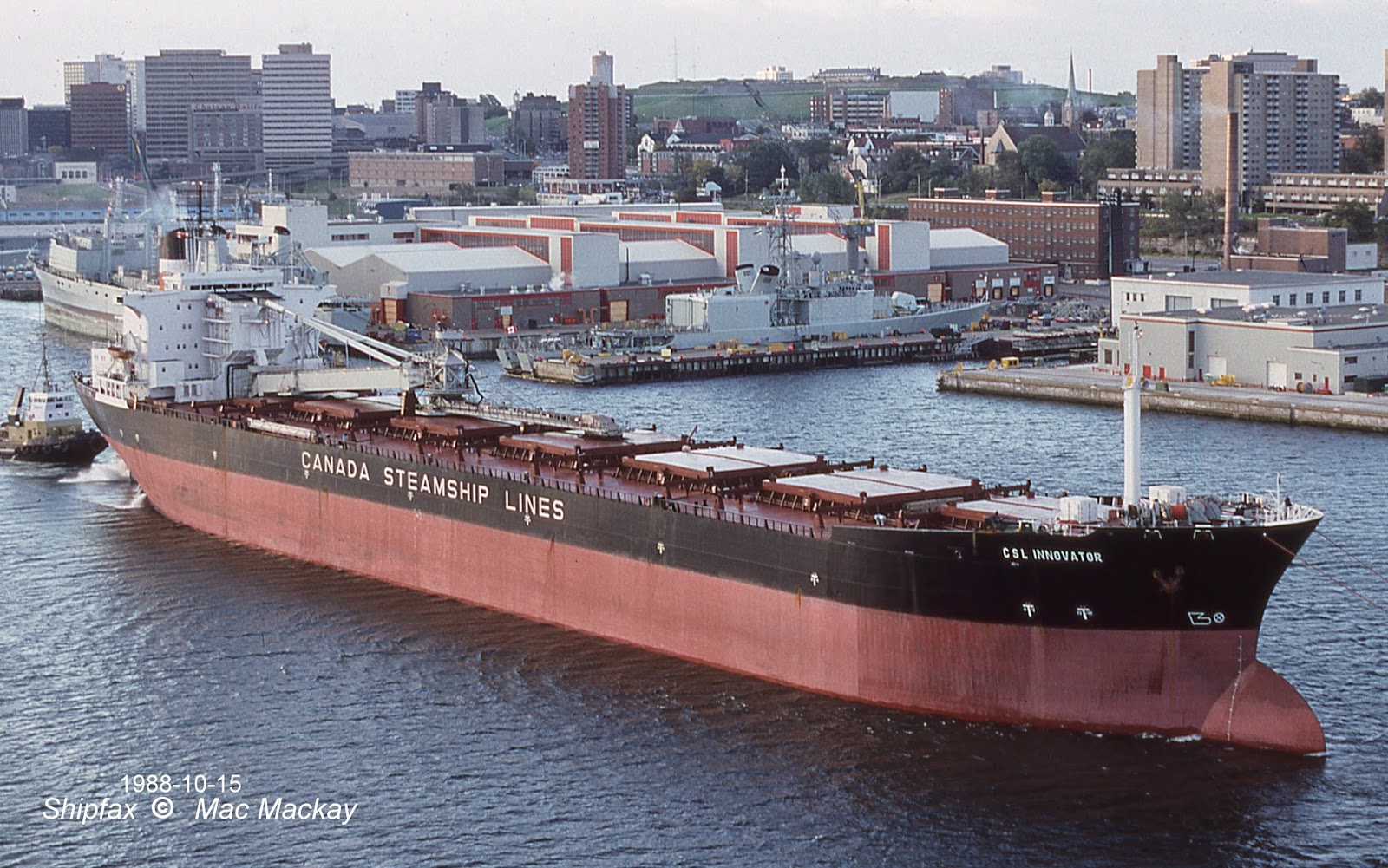 Fresh from conversion in Brazil, CSL Innovator arrives in Halifax for the first time. 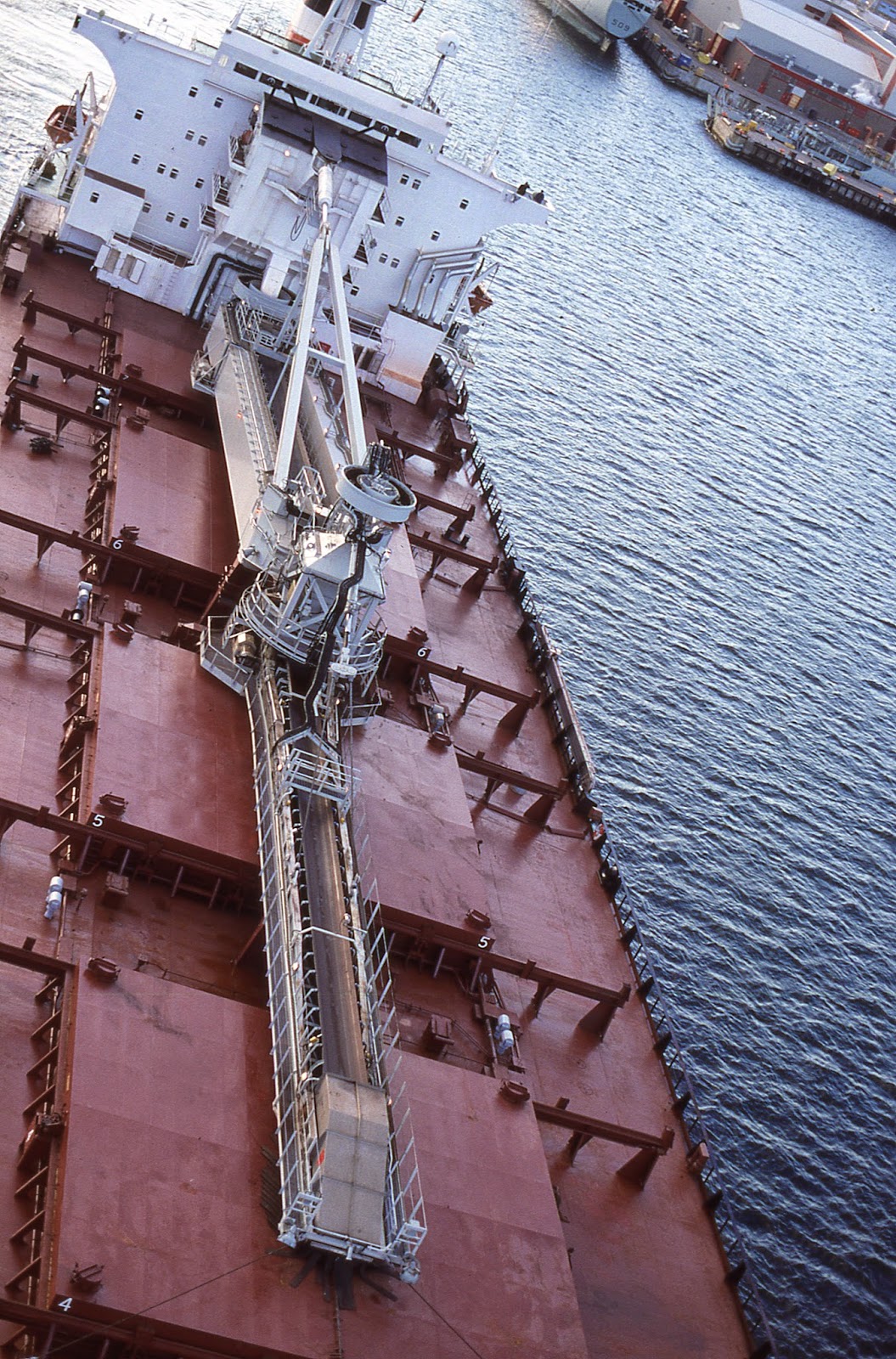 The primary innovation seems to be the articulating unloader boom. A swivel mid-point in the boom's length would allow it to deposit cargo over a wider range. 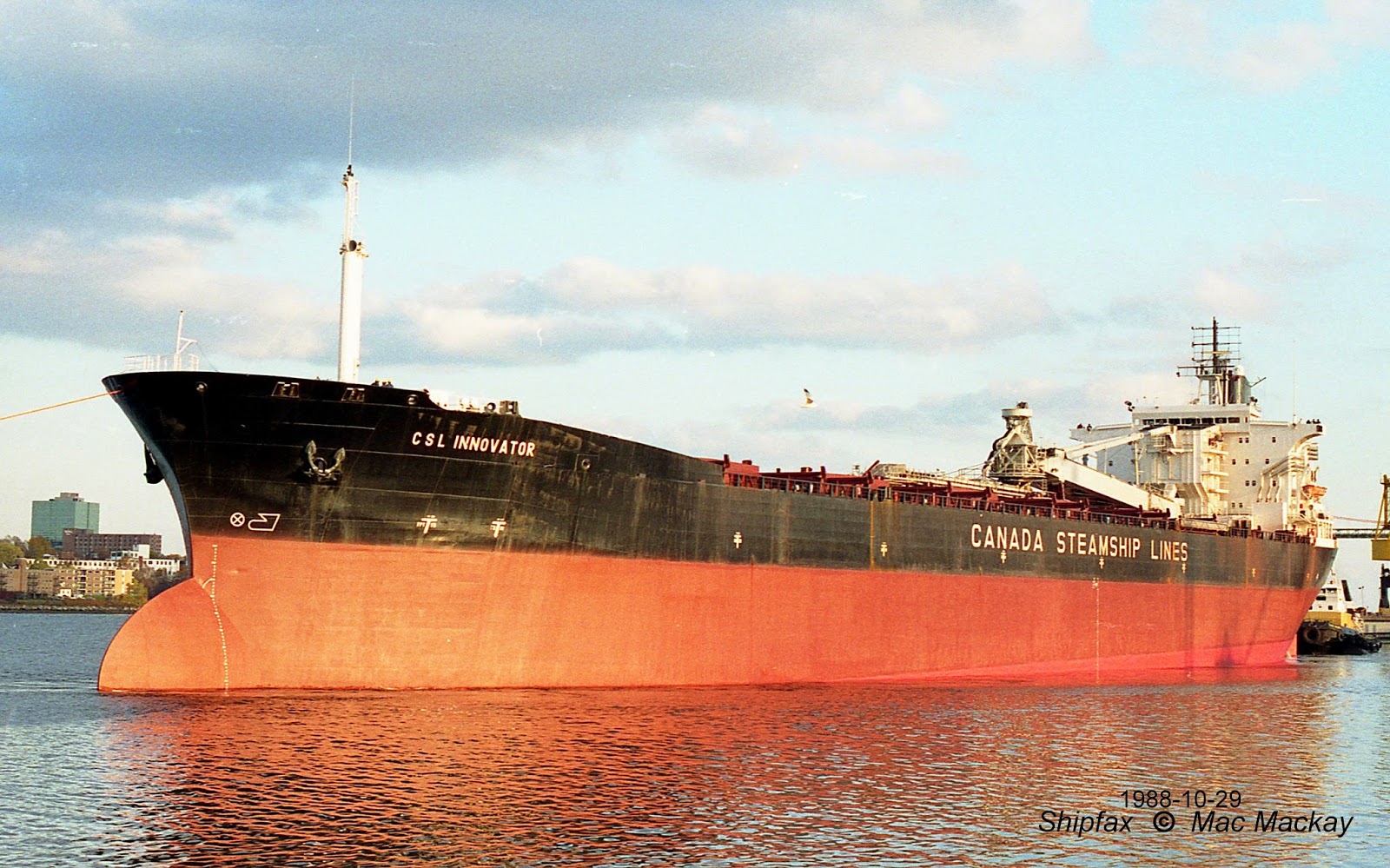 Emerging from the Novadock  floating drydock, the ship shows an odd waterline, indicating that much of the conversion work was done afloat. 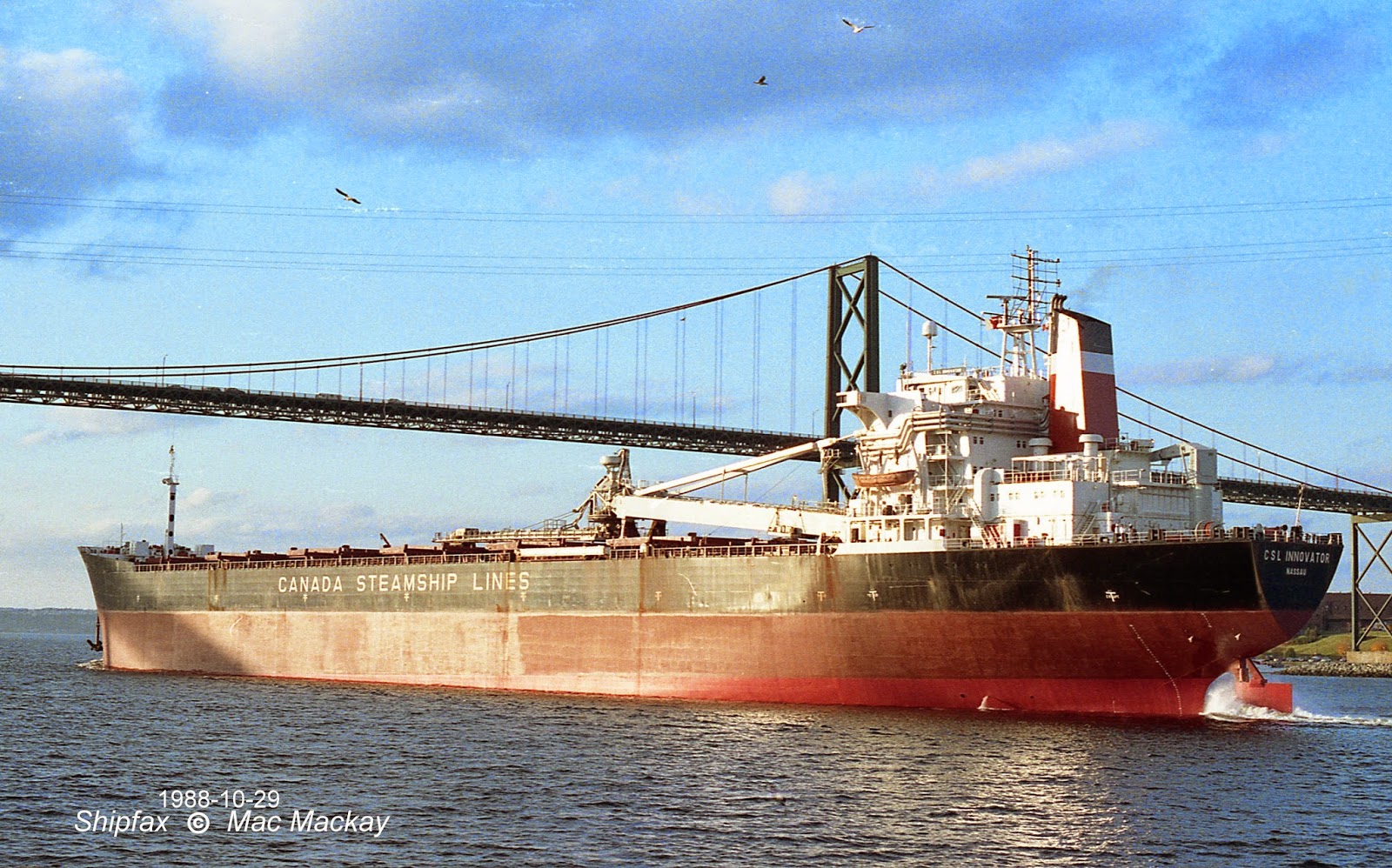 Exhaust stacks from the various self-unloader engines were neatly run together under the port bridge wing, and up the forward face of the funnel. The ship heads for Bedford Basin for a compass adjustment.

Following drydocking the ship headed to Sept-Iles, QC, and loaded iron ore for Sparrows Point, returning to Auld's Cove for aggregates to Baltimore, then headed transatlantic to work between Spain, Portugal and the UK.

On August 20, 1990 it had a fire off the UK coast en route from Hamburg to Halifax in ballast. It put in to Falmouth Bay August 22, then returned to Hamburg for repairs. It did not appear in Halifax again to load gypsum until March of 1993. Due to its size it could not load a full cargo here. It was more frequently seen at Auld's Cove loading aggregate.

On May 3, 1993 it ran aground in Chesapeake Bay after a steering failure and had to be lightered off before it was refloated. The process took 14 hours. 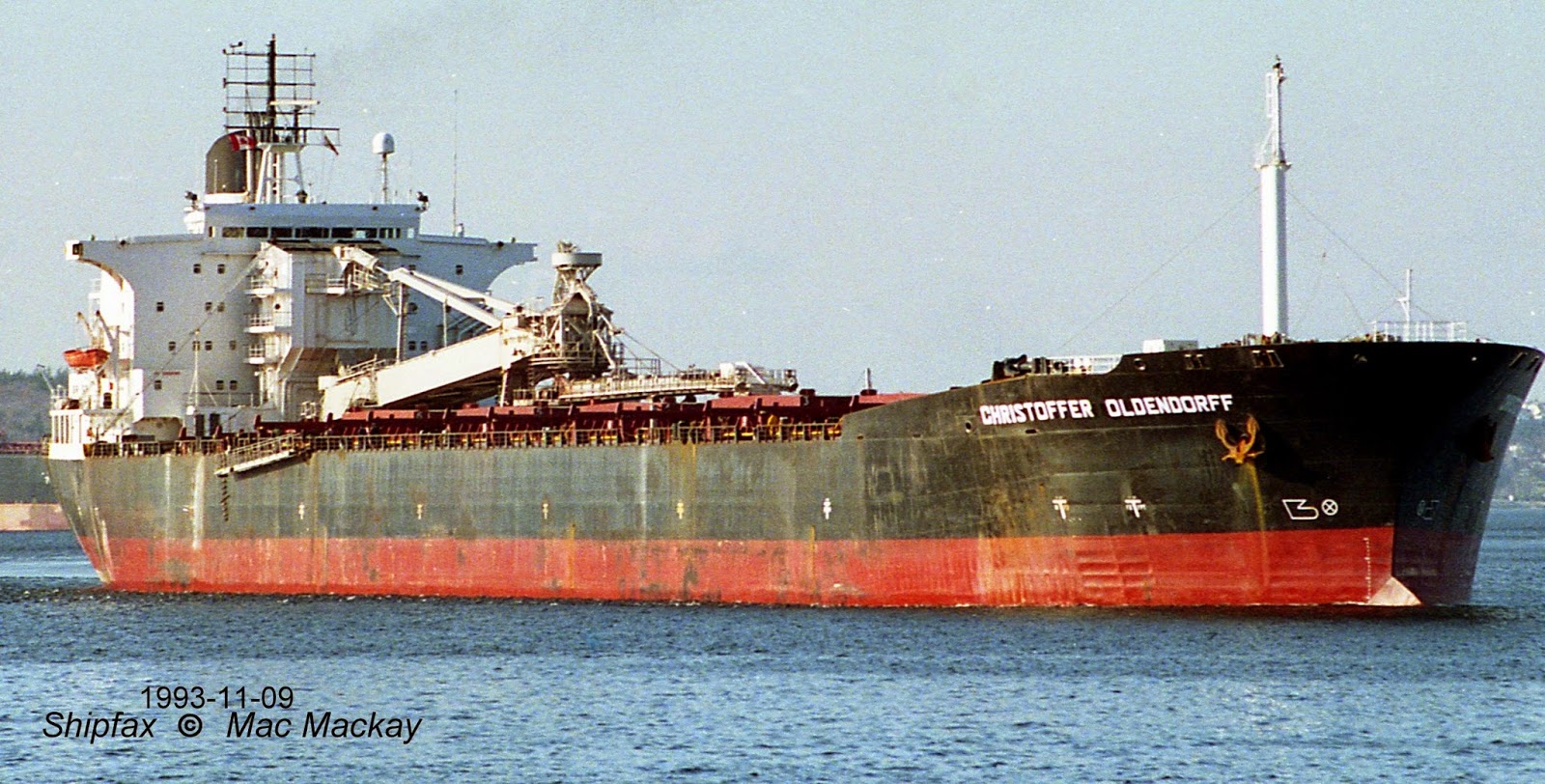 Under a new name, the ship sails with a part cargo of gypsum. Depth of water at National Gypsum does not allow the ship to be fully loaded. It appears to have sustained some damage starboard side forward at the knuckle, where there are several wrinkled and indented plates.

On November 8, 1993 while loading gypsum in Halifax it was renamed Christoffer Oldendorff by new owners Egon Oldendorff of Lubeck, Germany. As part of financing deal with CSL, it was then chartered back to CSL International and operated in the CSL pool of self-unloaders flying the flag of Liberia.

Oldendorff painted the ship in their own colours at the next drydocking and applied some innovative green antifouling paint that continued to leach off over the years.

In 2010 the ship was sold to Gretchen Shipping Inc, with Technical Marine Planning of Piraeus, Greece as a managers and was renamed General Piar, still under the Liberian flag. The name suggests it may have worked in the Philippines, where they are very found of generals, at least as ships' names, but that is only a guess.