Federal Commerce and Navigation (Fednav) of Montreal has been one of Canada's largest shipping companies since it was founded by the Pathy family in the years following World War II. They have been active in general cargo and bulk trades, first with surplus war-built cargo ships, then with company owned or chartered ships. Usually these ships have flown foreign flags and traded internationally.
Fednav have also had a significant presence in domestic trades over the years, primarily in the arctic, but also in the offshore.
Starting in 1974 they began a RoRo service for automobiles from Autoport in Halifax harbor to Newfoundland on charter to CN. [They had operated a conventional cargo ship, Federal Hudson on this service for three months in 1972, but it had no RRo capability.]

Federal Avalon was small enough to tie up on the inside of the Autoport floating jetty. (As I eventually learned, sun angle was an important consideration when trying to photograph a ship at Autoport.) 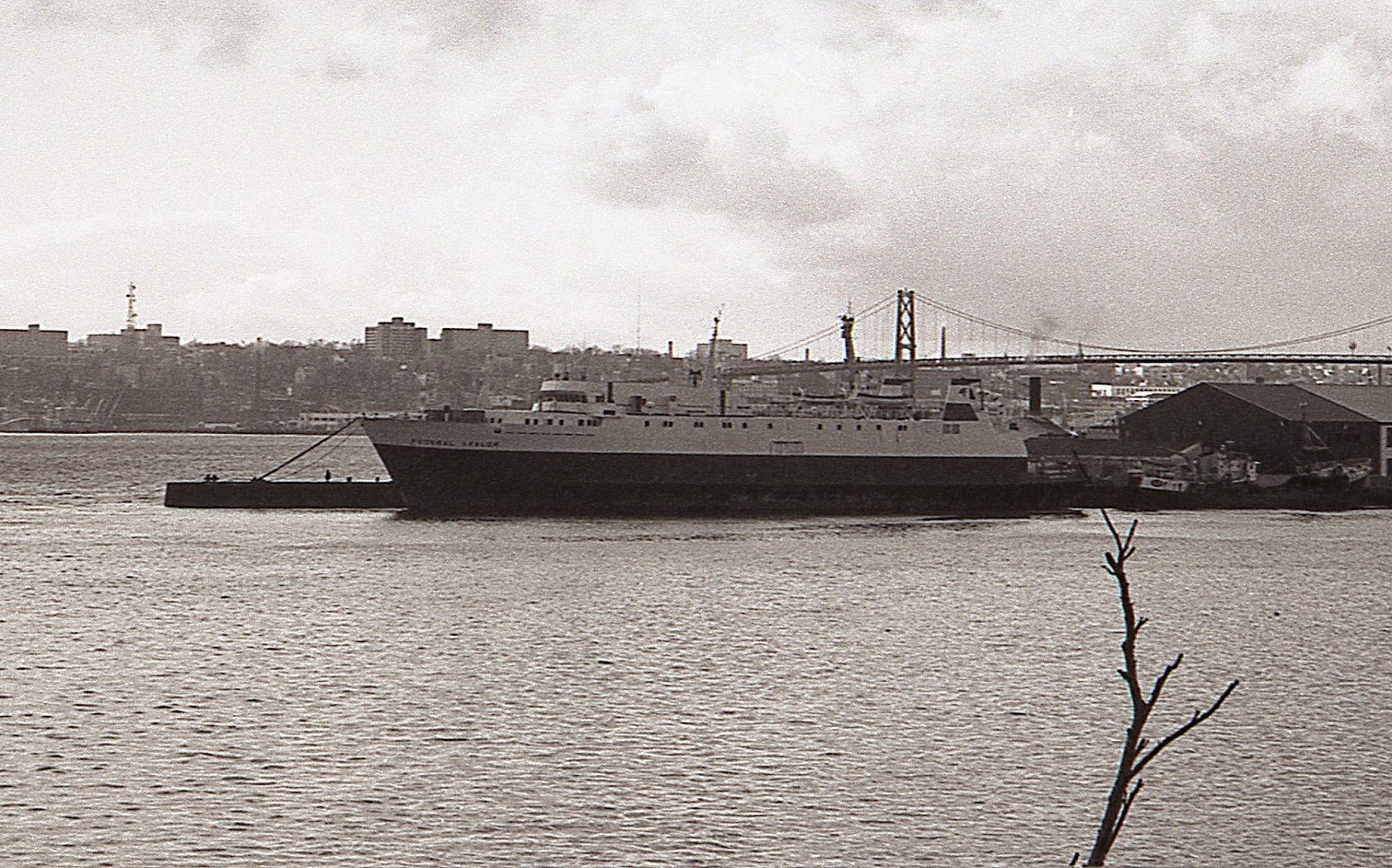 As I also learned, a 50mm lens was not adequate unless you were close to the subject. Federal Avalon is tied up at Dartmouth Marine Slips is visible in the middle of this enlarged and cropped image.


The first ship was Federal Avalon, named for the eastern Peninsula of Newfoundland, location of the island’s largest port and capital city, St.John’s.

Built in 1968 by Trosvik Verksted, Brevik, Norway, the vessel measured 1279 grt and was built for A.F. Klaveness + Co AS, through their subsidiary Universal Trading + Shipping Agency A/S as Mandeville.
In 1970 it was sold to Elder Dempster Lines Ltd of England, and registered in Bermuda. Renamed Skyway it operated for Seaway Car Transporters Ltd. In 1973 Seaspeed Trailerships Ltd became the owners, renamed the ship Seaspeed Trailer and hoisted the flag of Cyprus.


Federal Commerce + Navigation Ltd acquired the ship in 1974, and registered it in Newcastle, UK, then transferred it to Fednav Canada Ltd, under the Canadian flag.

Traffic to Newfoundland increased, and Fednav wanted to add truck trailers to the mix, and so added Federal Humber (see following) until a new ship could be acquired for the Newfoundland run.

Federal Avalon was sold to Vicca Marine Corp of Panama in 1980 and it was converted to a cattle carrier by the J.L.Meyer shipyard of Papenburg, West Germany. It then measured 1221 grt and according to Lloyd’s had a capacity of “1400 beasts plus camels.”  Economically renamed Avalo it was managed by the Dutch company Vroon B.V.
In 1983 it was renamed Murray Express and in 1984 sold to Philippine Ocean Lines Inc.


When traffic exceeded the capacity of Federal Avalon Fednav brought in Federal Humber, and expanded their service to include truck trailers. It was also built in 1968 by the Nobiskrug shipyard in Rendsburg. It measured 1204 grt and operated as Sealord Challenger for Sealord Shipping until 1969 when it was sold to Elder Dempster and renamed Clearway, and in 1970 Speedway. In 1973 it was sold to Seaspeed Ferries Ltd and renamed Seafeed Ferry. 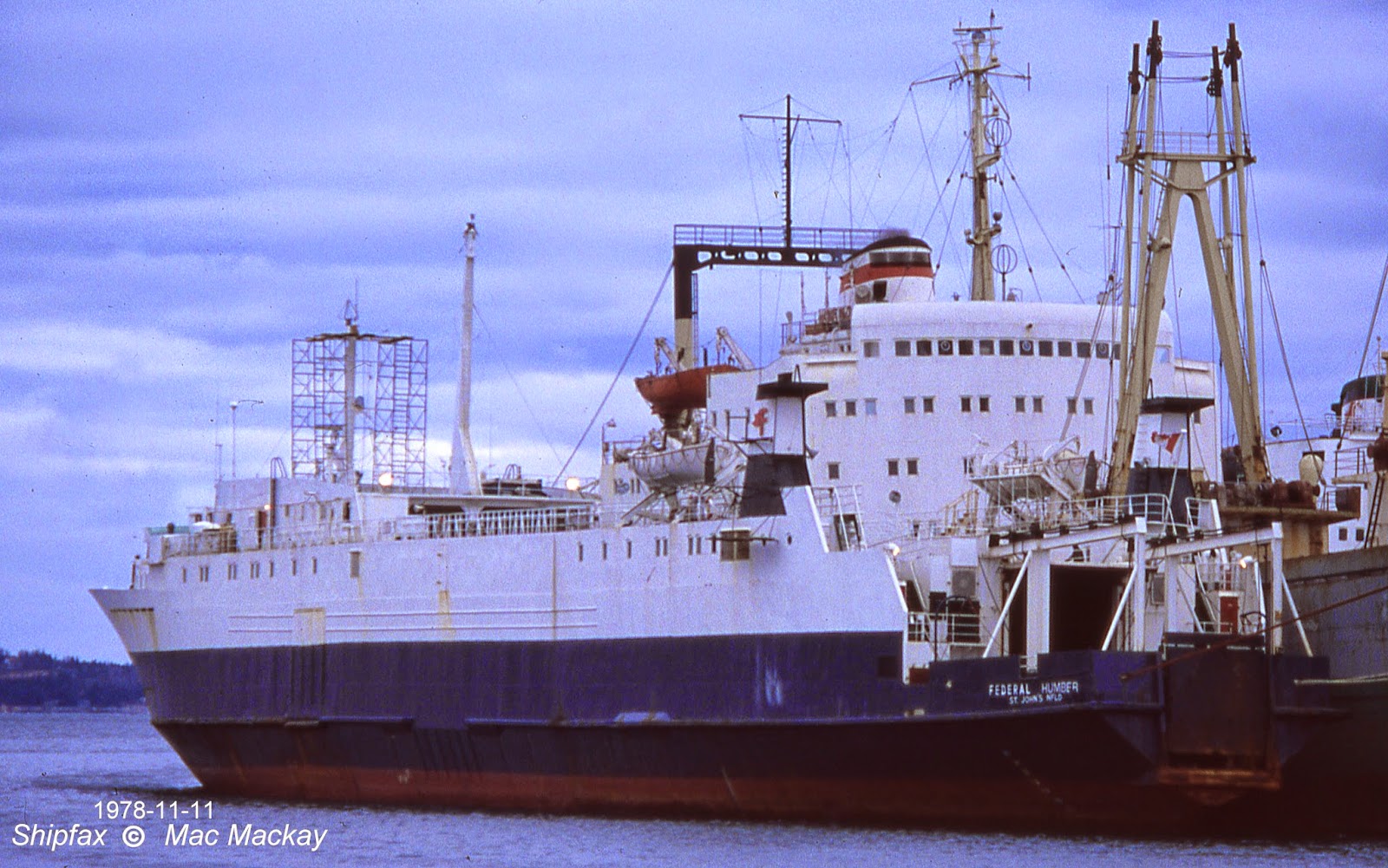 Federal Humber at Dartmouth Marine Slips for some repairs - note staging on the mast, and the elevator type stern ramp. It is also possible to pick out the section that was added to lengthen the ship - it has no windows.

In October 1978 it began running Autoport to St.John’s to supplement Federal Avalon and provide thrice weekly sailings. The Humber Valley in western Newfoundland and the Humber Arm forms the inlet to the port of Corner Brook.
With delivery of a larger ship Fednav (Carlton) renamed this ship Caribbean Cloud under Cayman flag, but it was soon sold to Agram Shipping Enterprises Inc of Panama and was renamed Kerry Express in 1981. It was then converted to a livestock carrier measuring 5959grt.
On October 10, 2001 it arrived in Xinhui, China to be broken up. 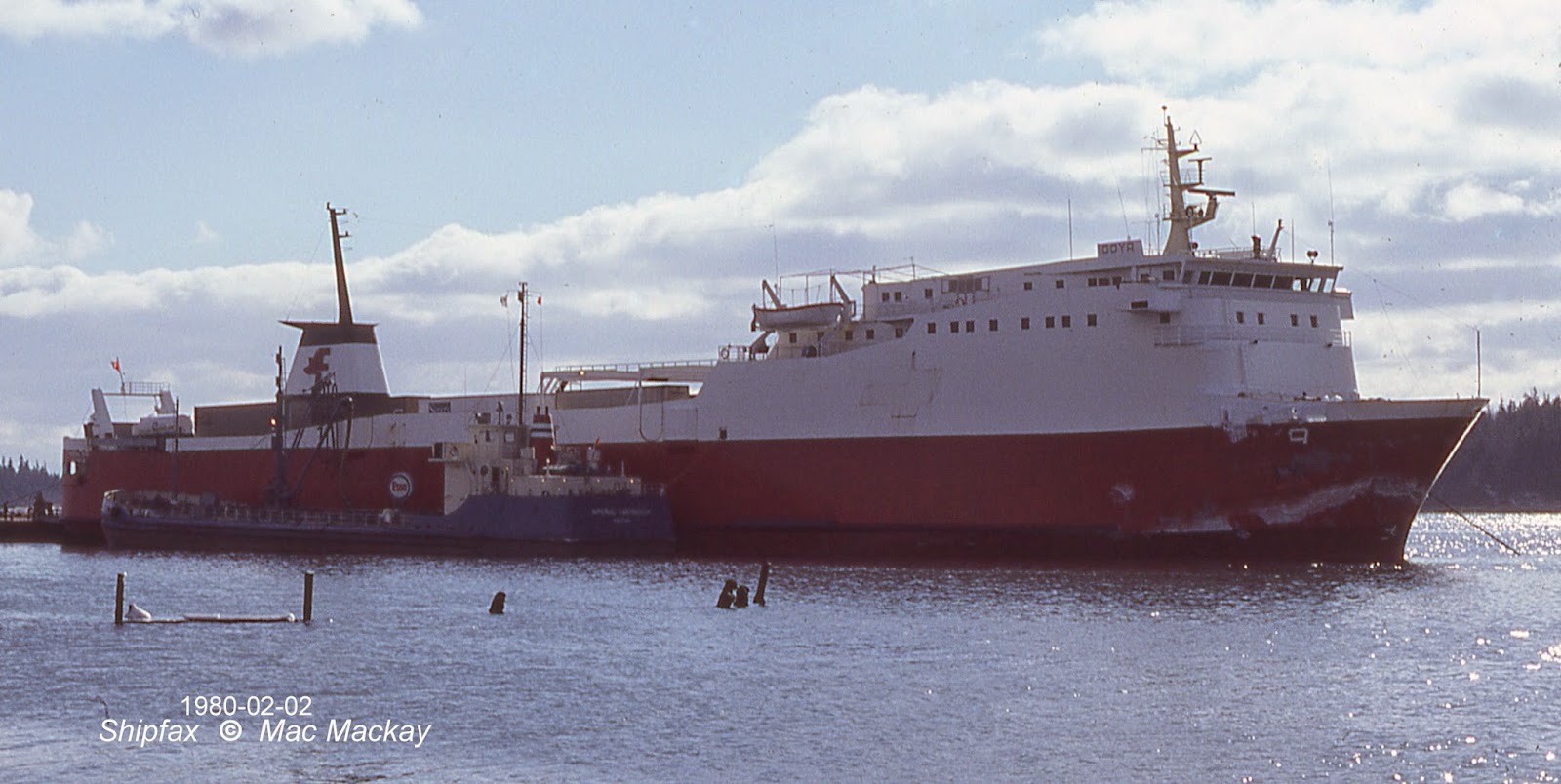 
To replace the two smaller RoRos, Fednav acquired a ship with a unique history. Construction of the ship began in Korneuburg, Austria, well up the Danube from the Black Sea. In order for the ship to reach the sea, it was built in two components, the hull to bulwark height and the accommodation.  The latter was built on a barge and in 1976 the two were to be towed down the Danube to Galati, Romania where they were to be joined. Due to water levels on the Danube, both parts ran aground, but not before knocking down a bridge. High water levels than trapped the barge carrying the superstructure for six months until there was clearance under the bridge.

Once assembled, the ship was towed to Werft Nobiskrug in Rendsburg for completion in 1977. While at that yard the opportunity was taken to lengthen the ship from its original intended dimension. It emerged with a grt of 3809 as Stena Tender but was immediately sold to McAndrews  and placed on P+O’s Pandoro service between Fleetwood, England and Larne, Ireland. The ship was renamed Goya for this operation.

In 1980 Fednav acquired the ship through its Canadian subsidiary Seaforth Fednav, which normally was involved in offshore supply tugs. On arrival in Canada in January 1980, the ship entered service as Goya, before being renamed Federal Nova.

Federal Nova gets underway from Autoport.
Its presence on the Newfoundland run was short lived, because another ship became available. The legendary Cavallo, which could also carry containers, became available in 1981 and Federal Nova was reassigned. In 1981 it became Caribbean Sky still for Seaforth Fednav, then was sold becoming: 81: Manaure VII, 83: Oyster Bay, 83: Viking Trader for Townsend Thoresen. It called in at Halifax under that name in 1983, presumably on a repositioning voyage from the Caribbean back to Europe. 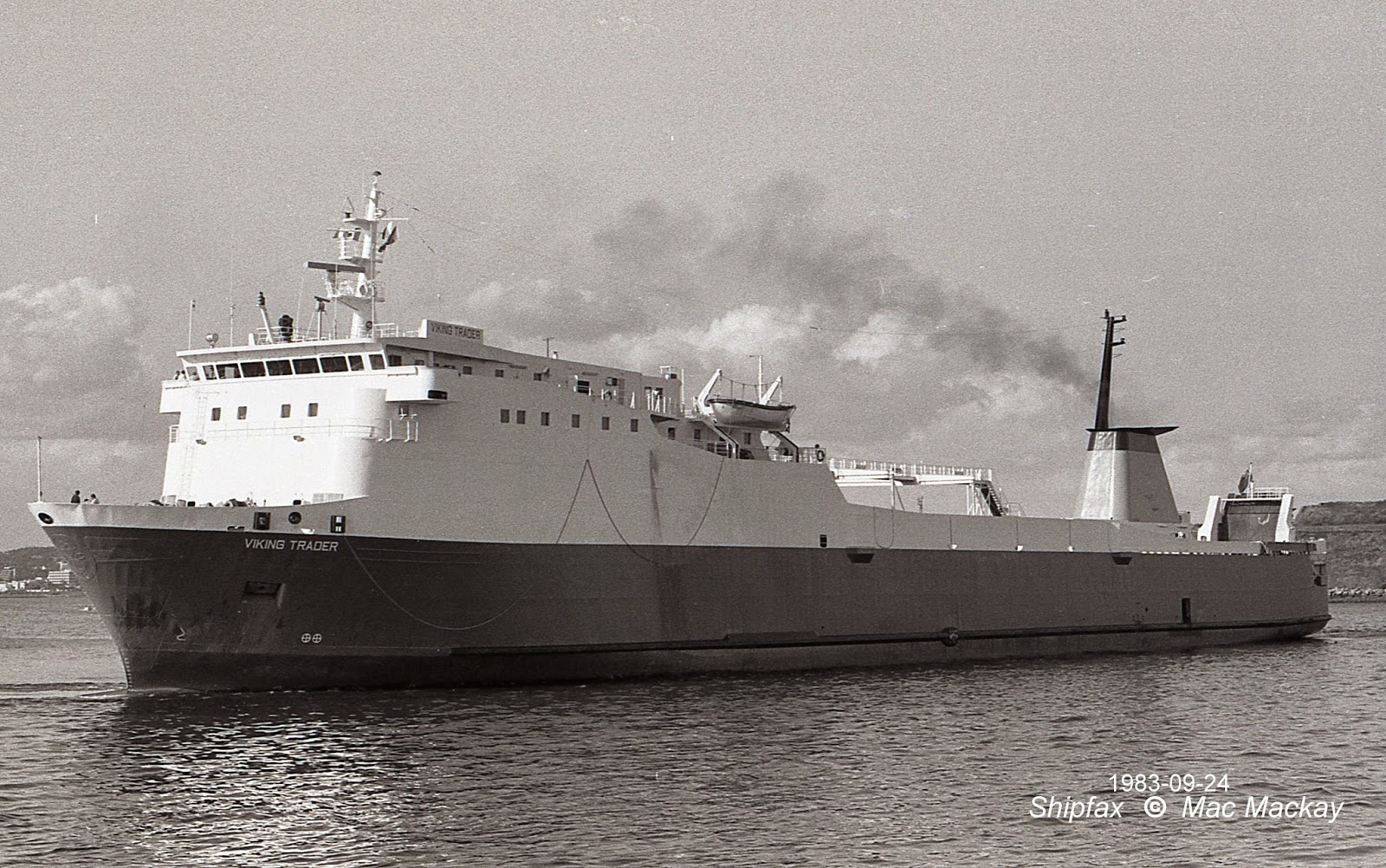 Viking Trader backs out from  a berth on the Halifax side of the harbor. 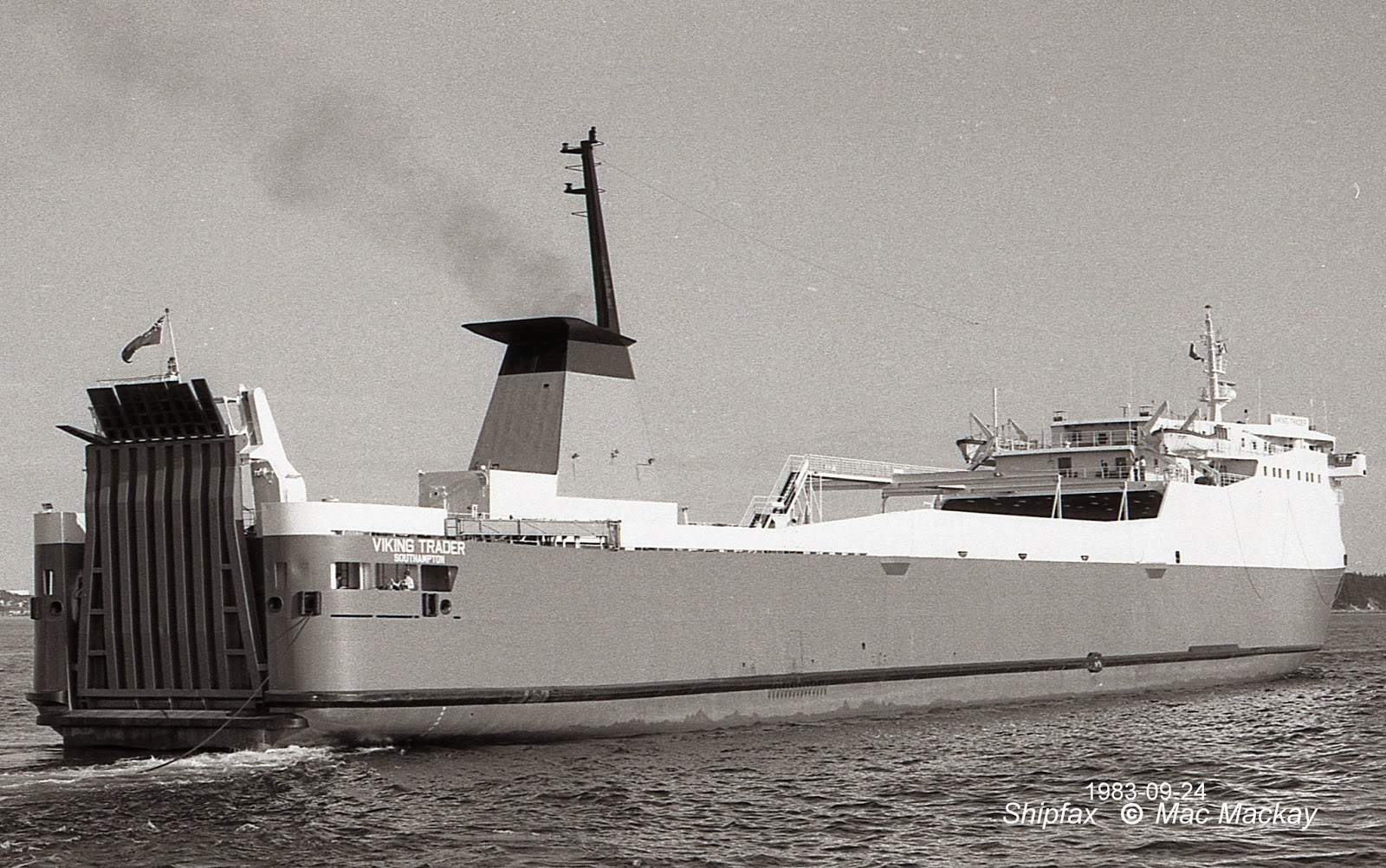 Underway for sea, the ship's stern ramp is visible, as is an unusual catwalk on the port side above the car deck.

In 1998 the ship was renamed European Navigator.
After its sale to Arab Bridge Maritime and Salam International Transport + Trading Co Ltd, in 2003, the ship worked in Egyptian waters as Black Iris. In 2012 it was sold to the mysterious Oceandro Large Yacht Builders of Suez, Egpyt (perhaps in default of repair bills) and renamed Black Horses.
On January 10, 2014 it arrived at the scrap yard in Al-Adabiya, Egypt.

Subsequent service from Halifax to Newfoundland was provided by Cavallo (later Cabot) and ASL Sanderling (later Oceanex Sanderling) before Fednav divested ownership of the operation.