Ohrmazd - once a VIP transport

In 1980 the cargo ship Orhmazd, brought the Pakistani flag to Halifax for perhaps the first time. 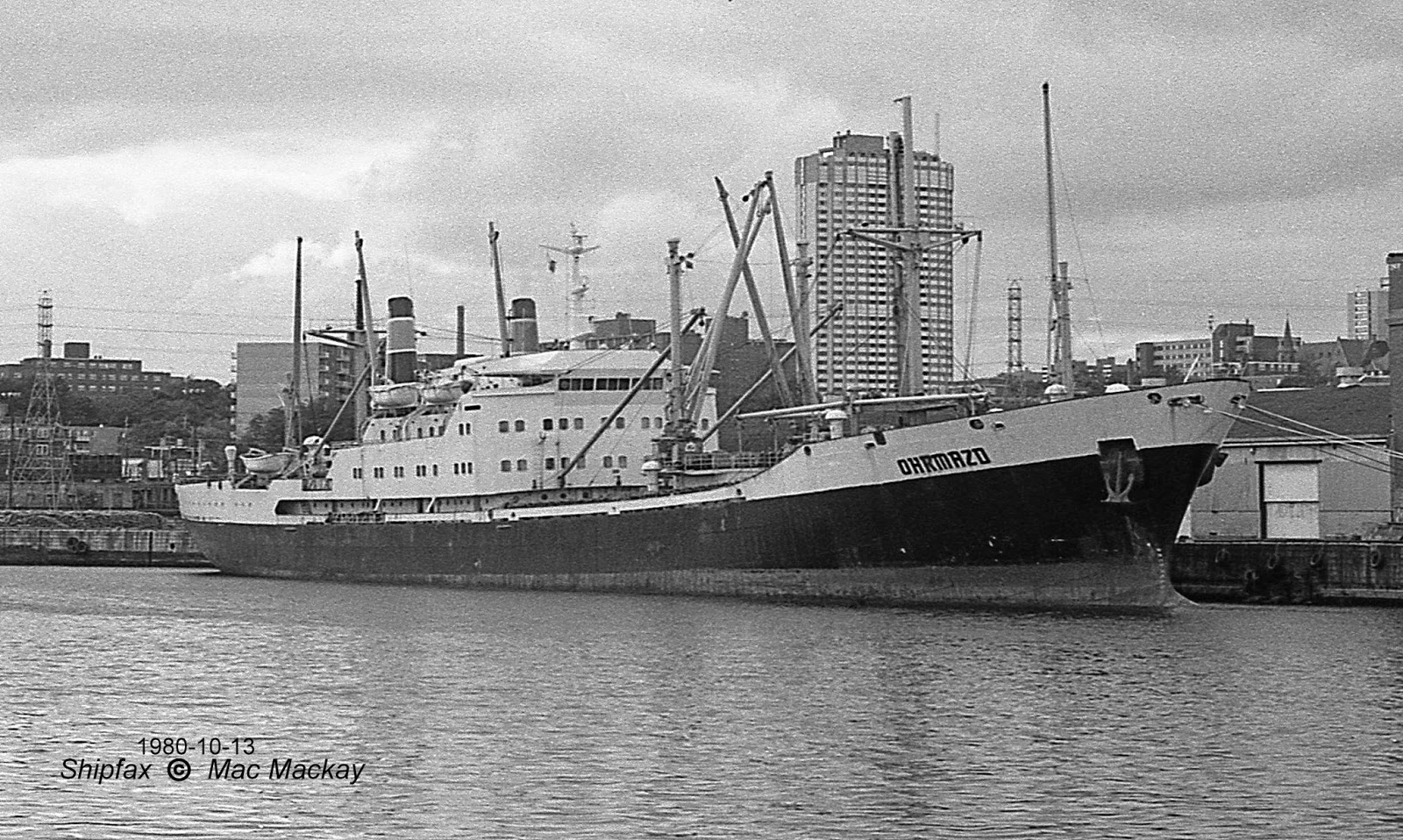 Its stylish look however was a giveaway that it was not an ordinary cargo ship, even though it was relegated to loading some now forgotten general cargo at pier 23.

The ship was originally ordered by the East and West Steamship Co to meet a very demanding schedule of operation between East and West Pakistan. The country had been created in 1947 and the two parts were separated by India. Sea travel between the two parts took weeks, but was necessary to maintain communication and transport of goods and people. The government of Pakistan and the ship owner gave the designers some unusual requirements.

The ship had to carry all forms of general cargo, including heavy lifts, refrigerated, liquids of various sorts and even currency. It must be able to accommodate 250 migrant workers at low fares to allow them to return home or go to work in the other half of the country. On top of all that it had to carry 26 VIPs in the most deluxe quarters possible, with all the amenities of a luxury cruise ship.

Construction of the ship was awarded to Burntisland Shipbuilding Co in Scotland in 1968, but the ship looked nothing like any other ship that came out of that yard. Well known for its high quality, attractive but traditional general cargo ships, this one was different.

In fact it had a number of designers. The hull, including its special bulbous bow,  was designed by Maierform SA of Geneva and tank tested in Vienna to give it an economical but fast cruising speed of 18-19 knots. The Design Research Unit of London designed the passenger, owner and officer quarters, and filled the interior with art work and decor of all sorts incuding glass partitions, murals and curved stairs, and  fitted in a sports deck, pool and bar in addition to the usual saloon. The lowly 3rd class received somewhat less attention I suspect.

The ship proved to be a success, shaving ten days off the round trip from East to West to East Pakistan, to 21 days.Rapid loading and unloading at each end was accomplished by eight 5 ton cranes, ten 5-10 ton derricks, and one 50 ton jumbo. The ship measured 11,046 grt, and 13,339 dwt. And all this was accomplished to meet a controlling draft of 22 ft in order to reach Chittagong.

Oh and I forgot to mention that there was a crew of 88, many of them cadets in training for sea-going careers, particularly as engineers. The ship's 9 cylinder Clarke-Sulzer engine developed 10,600 bhp and likely received a great deal of careful attention.

The ship only served in its intended role for three years. After years of friction and ultimately a war between the two sections of the country, East Pakistan become the independent country of Bangladesh on December 16, 1971. At the same time West Pakistan became simply Pakistan. It retained control of the ship, and it was assigned to general world wide trading, with a reduced passenger count of 12.

In 1974 Pakistan nationalized ten companies to form the Pakistan Shipping Corp, renaming it the Pakistan National Shipping Corp in 1978.  It was under that ownership that the ship arrived in Halifax October 5, 1980. It sailed again October 15.

Footnote: The ship's name puzzled me and after diligent research, I have determined that it was the name of Zoroaster's deity. The Zoroastrian religion was the predominant religion in Persia and pre-dates most of the known religions of the area. Its influence spread into what is today Pakistan, where the diety is still referenced..