The early bird was rewarded today as another heavy snow fall began late morning blotting out the view.
CCGS Cape Roger arrived last evening and anchored until this morning when it moved to Imperial Oil to refuel. The ship is on Search and Rescue standby along the South Shore of Nova Scotia. 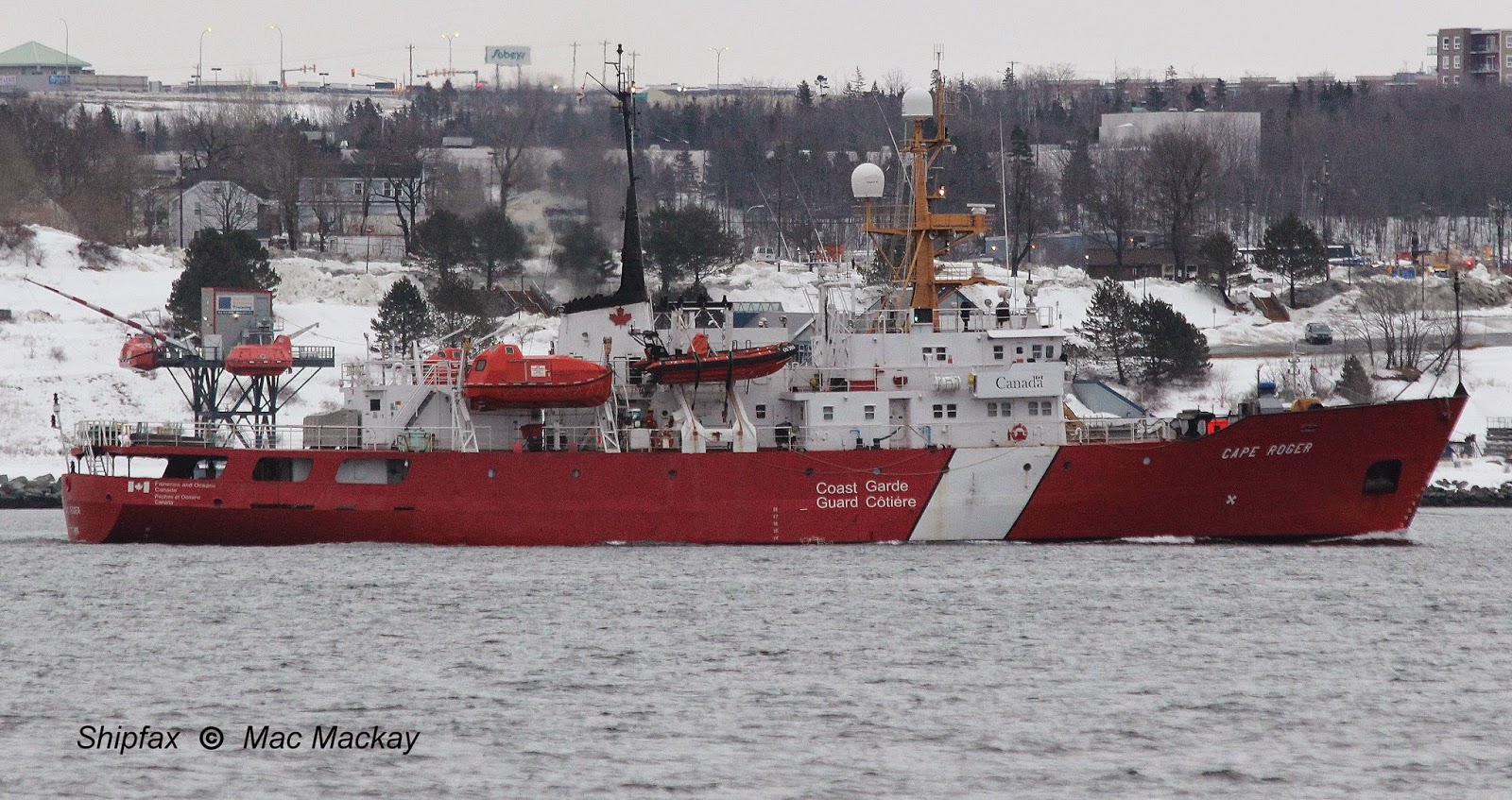 Also in this week is CCGS Alfred Needler at BIO. Both ship are based in Newfoundland, but are often displaced in winter and spring by ice, and exchange places with Halifax based ships. 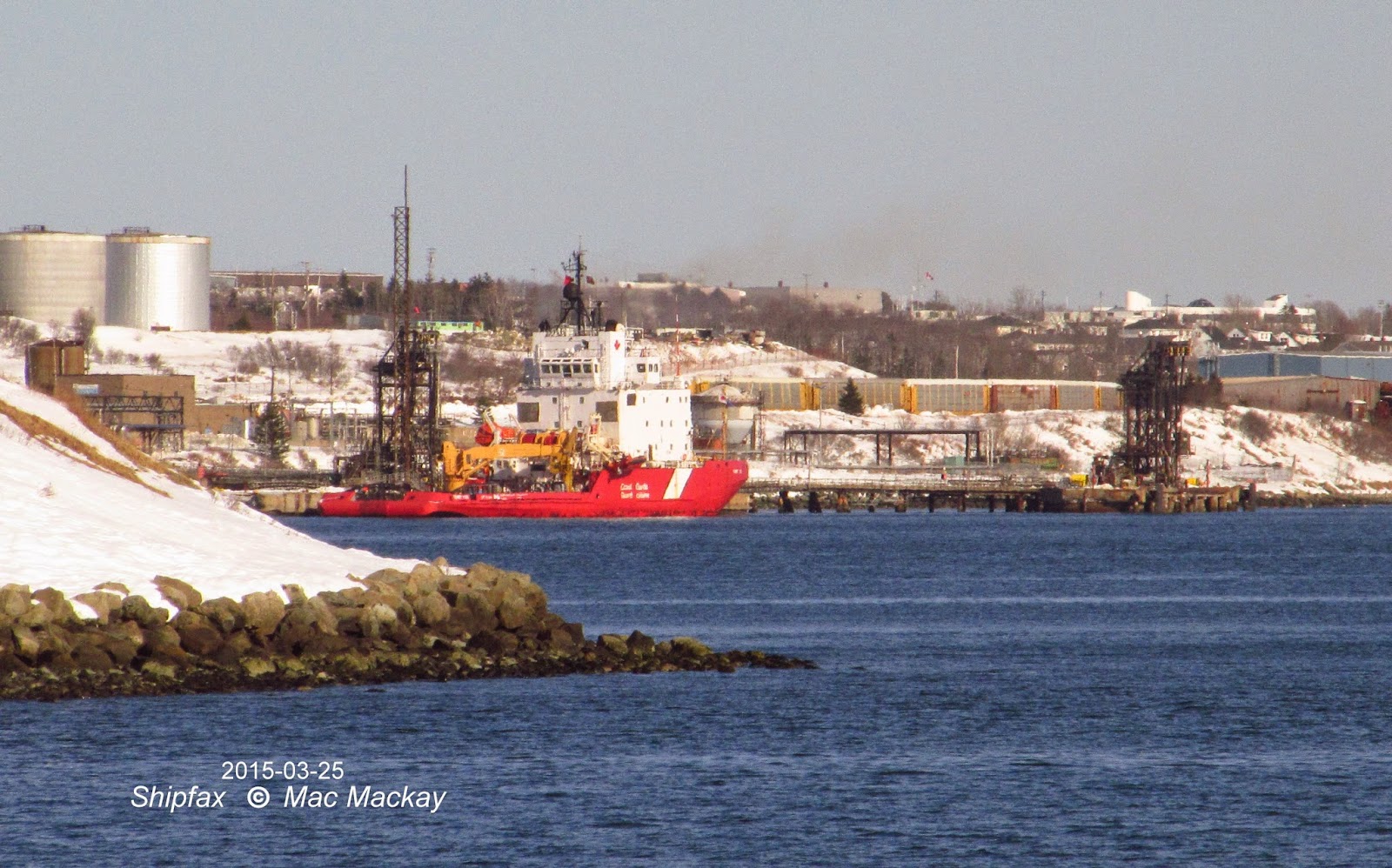 One visitor this week that I failed to post was CCGS Terry Fox, in for refueling March 25. We have now seen the entire east coast icebreaker fleet this spring - so much for the wisdom of moving them to Newfoundland. 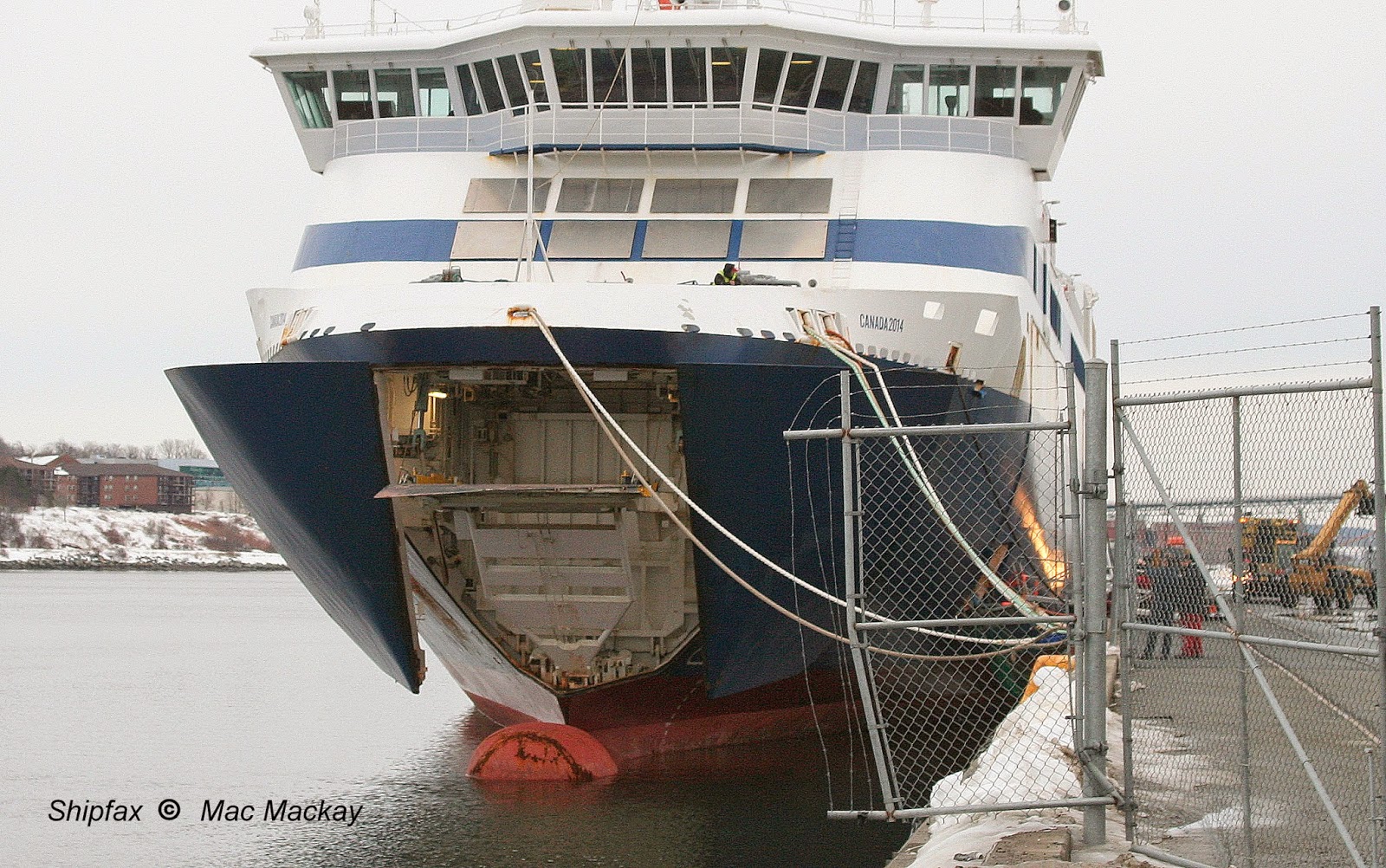 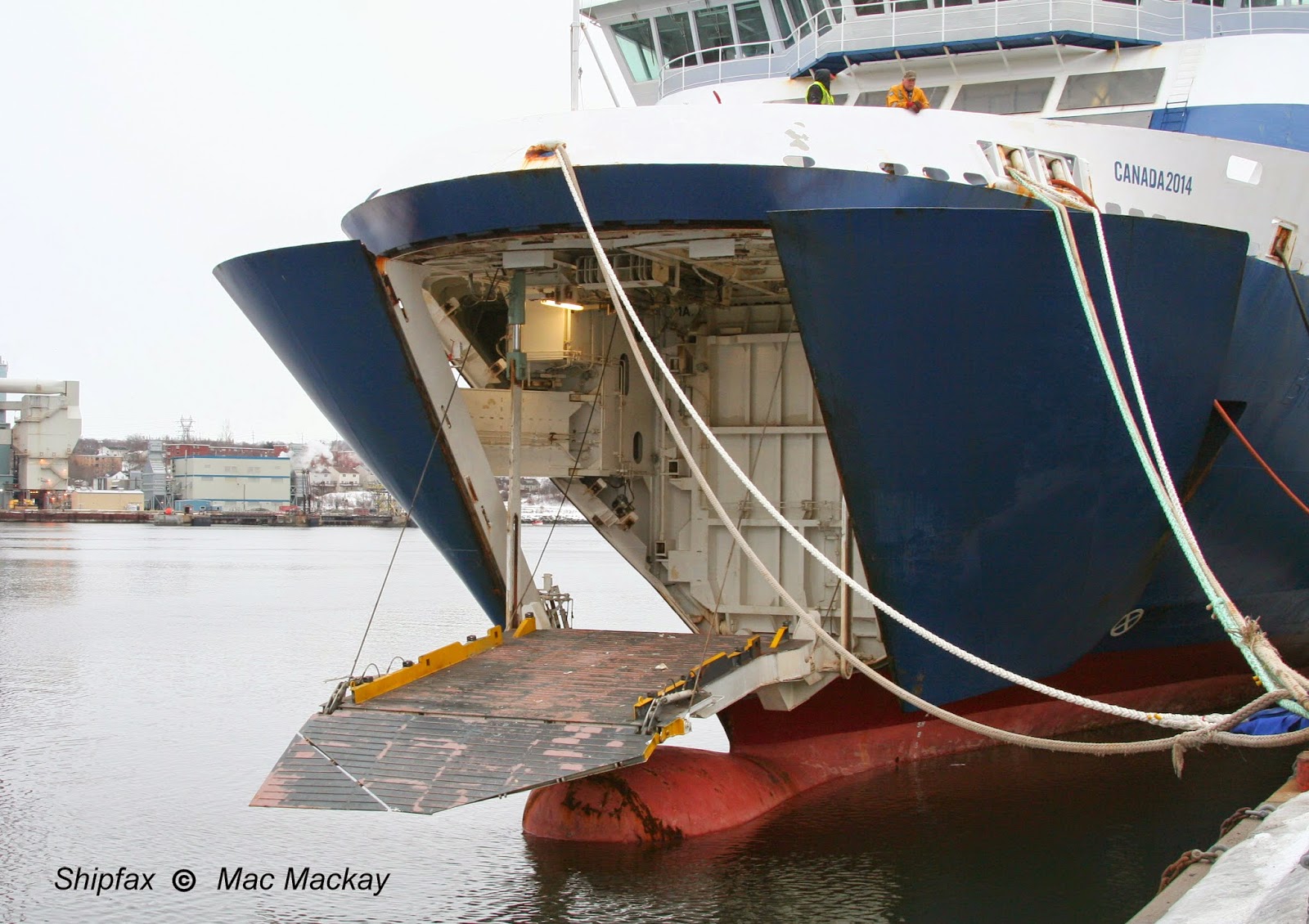 At pier 9A work on the ferry Canada 2014 is, if you will pardon the expression, "ramping up". This morning workers had both the bow and stern doors open for work. 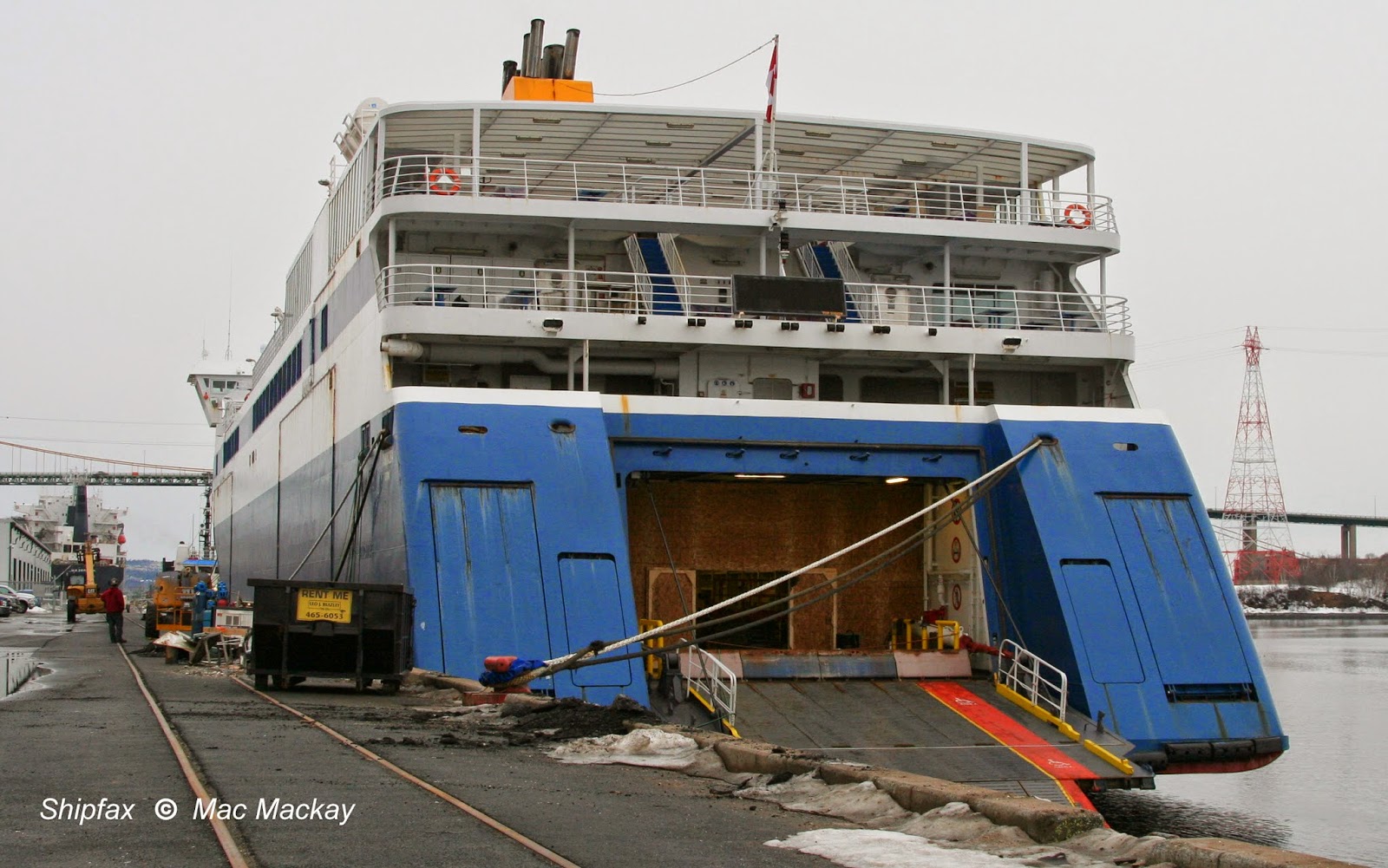 The stern ramp, with a red painted pedestrian pathway. A temporary partition has been built inside the car deck to retain heat during the refit process. After this photo a mobile crane came along to take the weight of the ramp for work on the bearing.

The ship is expected to enter service between Digby, NS and Saint John, NB, sometime this summer.


See Tugfax for the tug Lois M and barge Nunavut Spirit at pier 9B.


At pier 9C Harefield is still tied up for repairs. 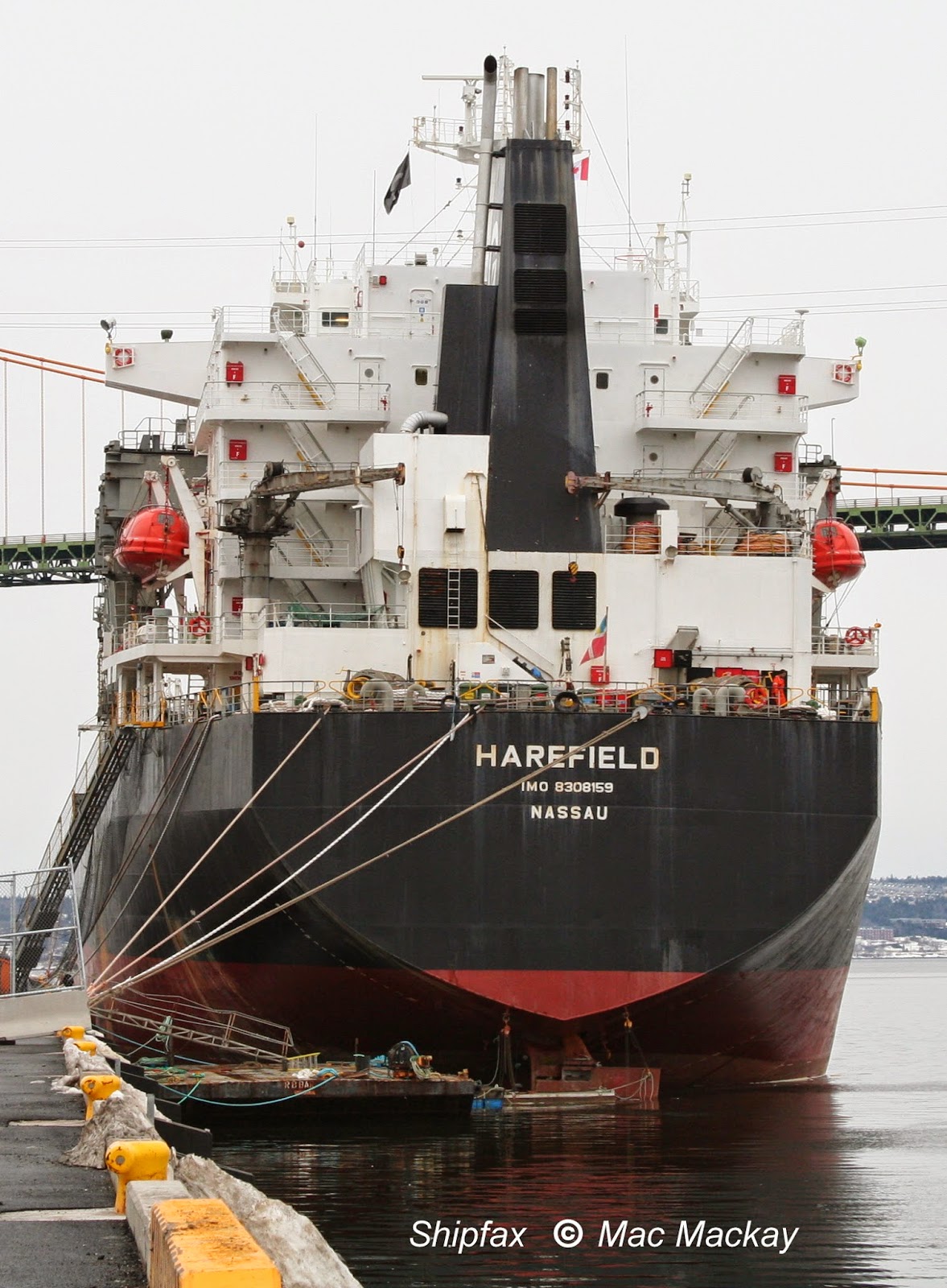 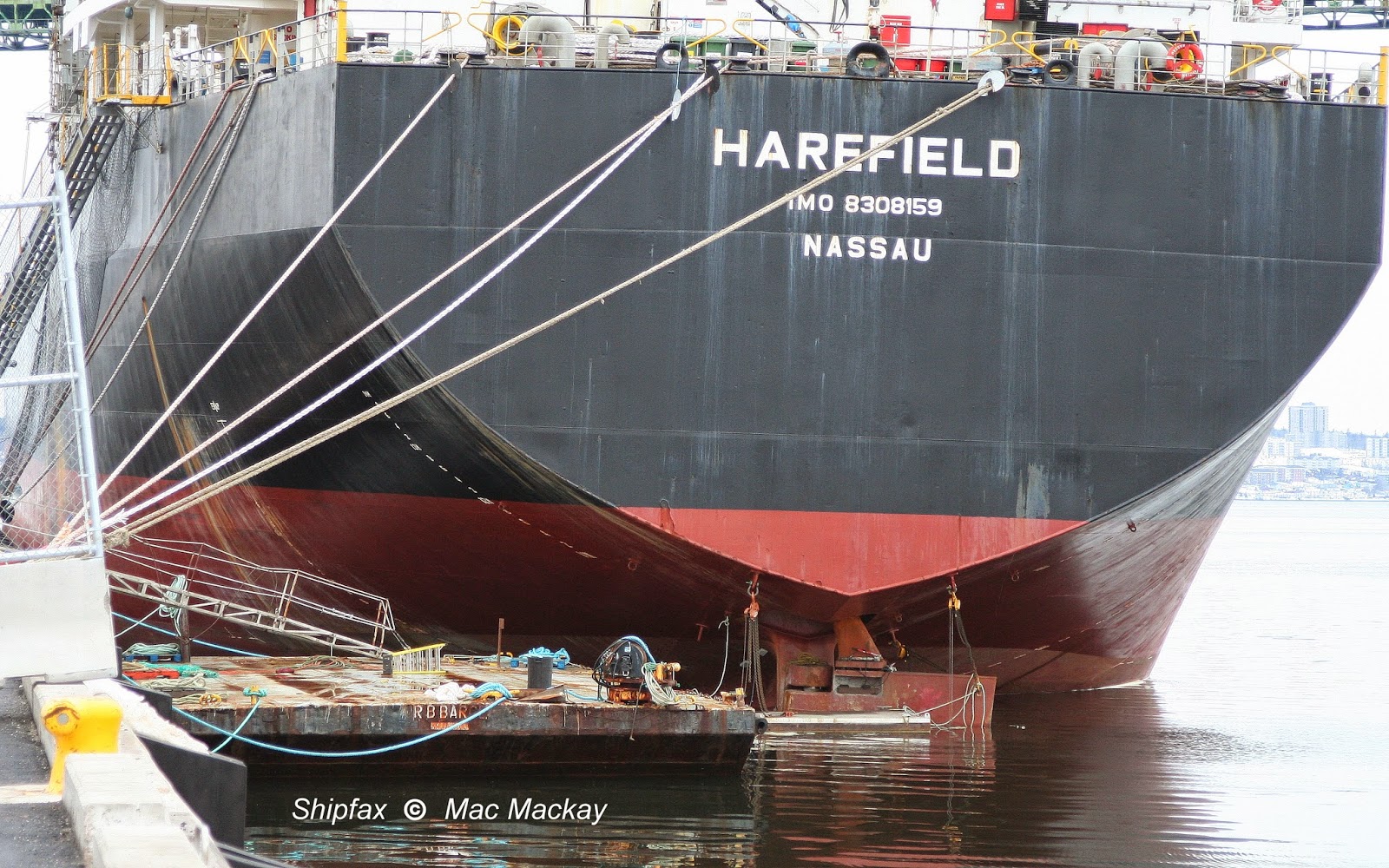 Work continues on the rudder using a raft and various tackles to take the weight off the pintle.

In Bedford Basin the Torm Rosetta lies at anchor until it is time to go alongside Imperial Oil Another handysize tanker product tanker, it was built in 2003 by Onomichi Dockyard in Japan as Rosetta for OMI. It was acquired by Torm A/S in 2008. The ship measures 28,567 grt, 47,038 dwt and is enrolled under the Danish International register. (Denmark and Norway, among others have offshore registers which have different regulations from their national registers, as to foreign crewing, taxes, etc.,) 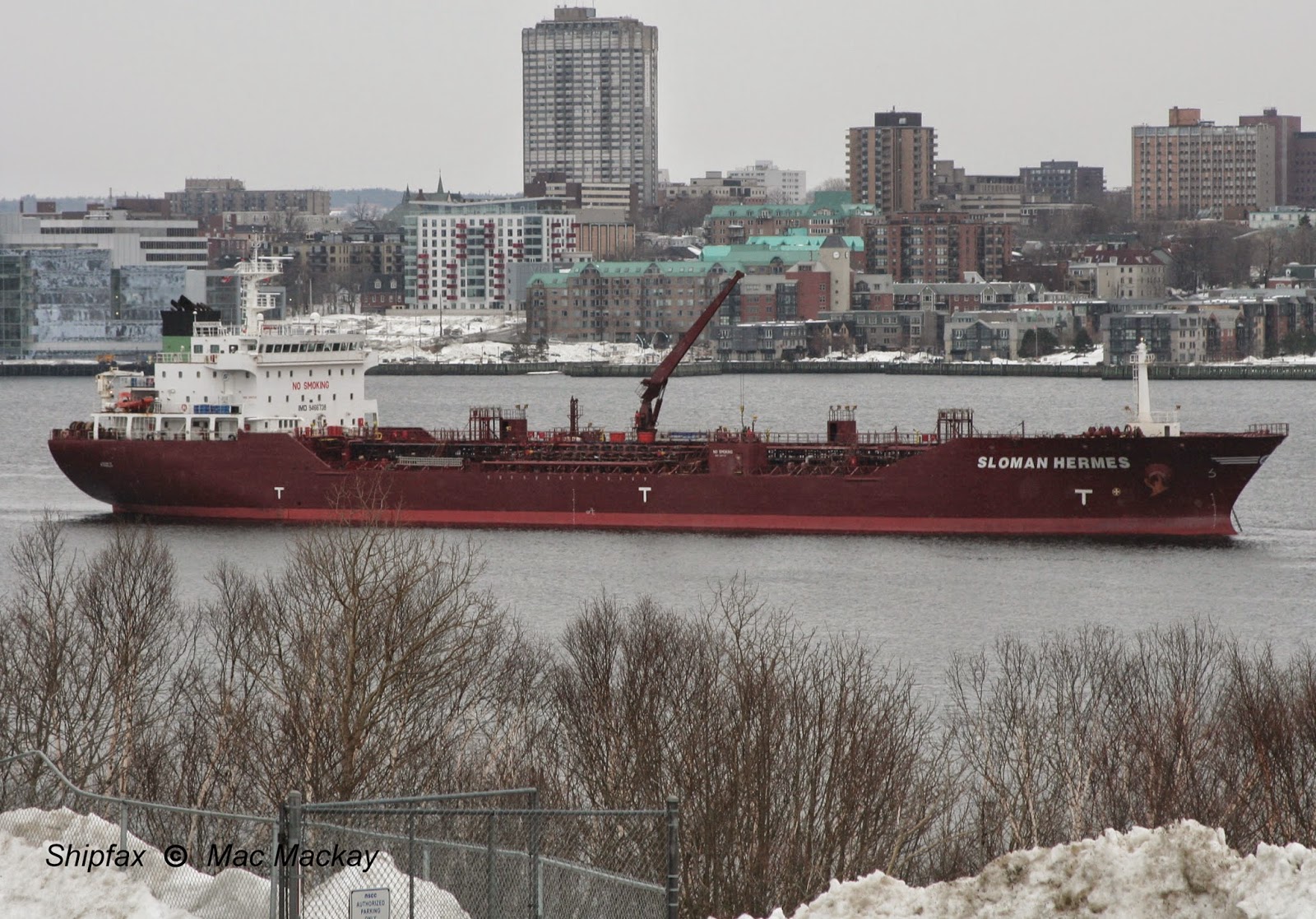 At anchor the tanker Sloman Hermes will be sailing this afternoon for the St.Lawrence. It has been awaiting the opening of the St.Lawrence Seaway, which has been postponed from March 25  27 to April 5 2 due to ice. Rather than anchoring in ice off the Escoumins pilot station or farther upriver, the ship opted for the comforts of Halifax harbour. An ice adviser boarded the ship late in the morning from the launch Halmar. 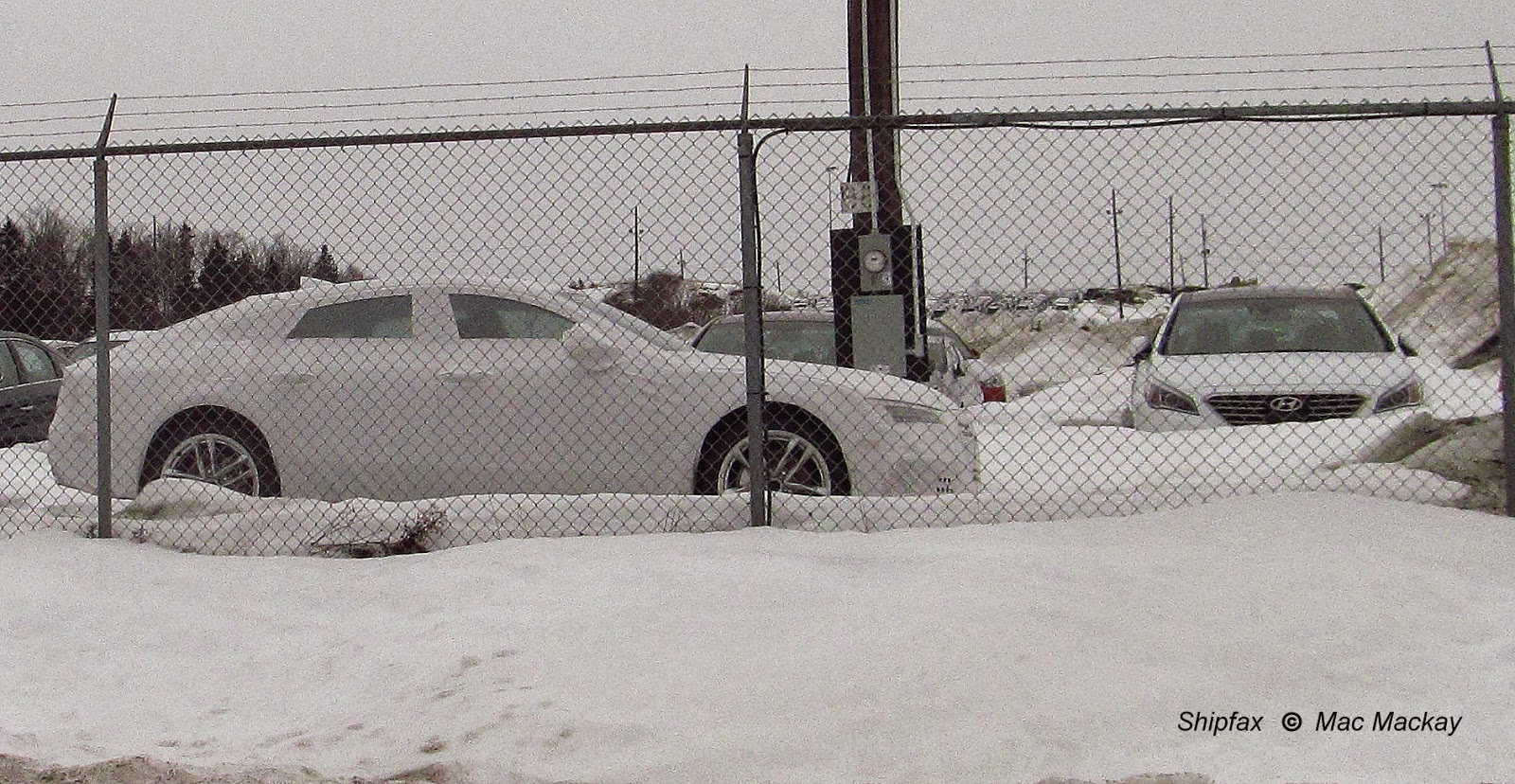 Autoport is still struggling with frozen in cars - thousands are still in ice up to their hubcaps, but it appears that more recent arrivals are still being processed, as the trains keep rolling out every days with a dozen or more autoracks full of imports. [In the photo of Terry Fox above, there is a string of autorack cars waiting in a siding.] Recent arrivals are leapfrogging ahead of the January and February arrivals which are waiting for natural melting to free them. 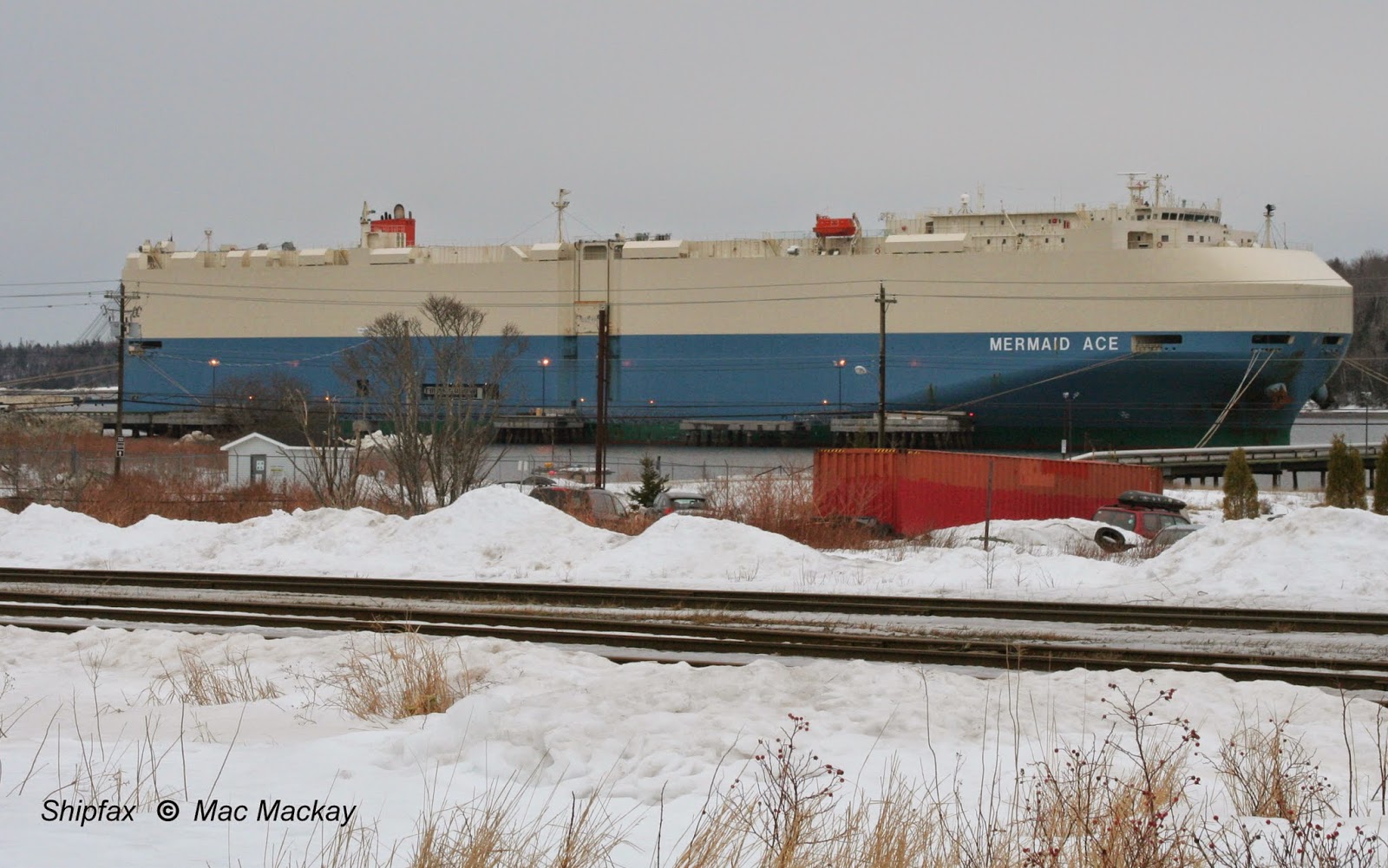